Dying Light 2 Stay Human is a perfect type of game to show off ray tracing. The post-apocalyptic world has so many areas where you’ll get the benefit of real time reflections, improved lighting effects with ray-traced global illumination, and more realistic shadows with ray tracing. And you know by now the magic of DLSS which can not only improve performance but sometimes even improve on the image quality in certain situations.

NVIDIA was kind enough to send a copy over for us to look at. I’ll be taking a look at the game utilizing the following configuration:

Eric recently reviewed Dying Light 2 and he really enjoyed the game. It looks really good on the console, but it’s even better on the PC thanks to ray-tracing, DLSS, and higher resolution support.

I mainly did the beginning where you meet up with Spike and do some learning of the controls. There’s some good lighting and a few reflective areas and I was able to do some consistent runs with it.

All settings were changed using the presets that are provided by the game. For the first run, I had everything set to default. I then compared it with turning on DLSS at both quality and balanced settings. 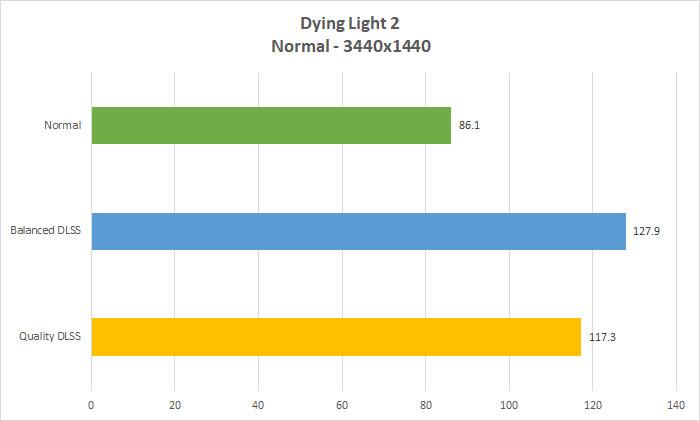 As you can see, the game does run well averaging 86.1 frames per second. Turning on balanced DLSS yielded a nice 33% uplift to an average of 127.9 frames per second. Finally, the quality DLSS also gave a nice little performance boost at 117.3 frames per second average which resulted in a 27% uplift. Image quality looked a little softer in balanced and while quality provided an image quality that was hard to distinguish between it and the default settings.

Turning on ray tracing, I switched the preset to the regular ray tracing defaults and did the same run with the following results. The lighting effects are more subtle in most cases, but it does make some things look a lot more natural and realistic. 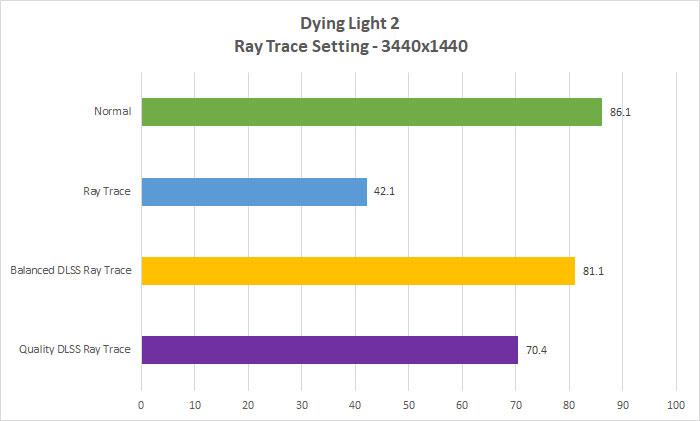 As you can see, there’s a huge drop off in performance with all the features on taking a big dip with a 49% reduction in performance with an average of 42.1 frames per second. Turning on DLSS in balanced mode almost brought it back to the average without RTX enabled with an 81.1 fps average while the quality setting wasn’t too bad at 70.4 fps average.

To really push the system, I then ran the test at high ray trace settings. This really made Dying Light 2 far from having a smooth gaming performance with an average of 32.6 fps or a 67% drop off. Enabling balanced DLSS upped the average to 67.5 but had drops below the desired 60 fps while quality DLSS was averaging 56.1 fps. 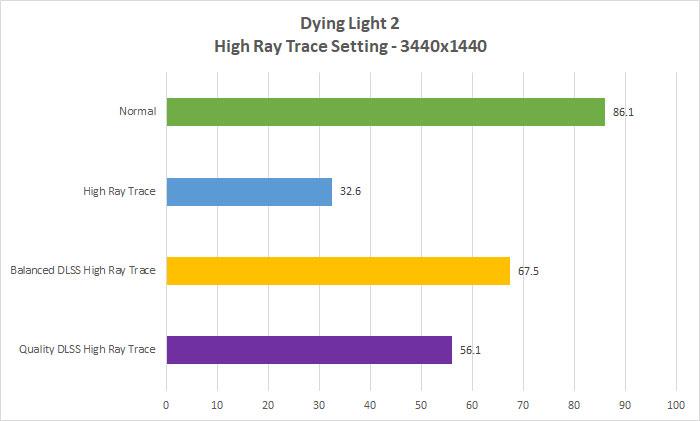 Picture quality wise, the balanced and quality settings produced comparable images to native resolution and I definitely would turn on quality at the minimum because it’s really hard to tell between that and not having DLSS enabled.

One thing I did notice when having RTS enabled is shadows produced by sunlight had a flickering effect in some instances. As you can see in my video below, the trees were flicking in and out and when I changed the Sun Shadow Quality, the flickering went away. So if you do turn on RTX, I would turn off Sun Shadow Quality until the issue is fixed so you don’t get that jarring effect when playing.

With RTX, there are some spots you can see better reflections. In the spot I have highlighted below, you can see how flat it is without RTX enabled, but once turned on you get a nice subtle reflection of the world around you in what looks to be shallow water. It’s subtle but adds to the immersion of the game when you are traversing the world.

Dying Light 2 has some nice looking visuals with RTX features and if you have a strong rig, turning on the regular ray tracing preset yields some good looking environments which is highlighted by the day night cycle of the game. As I said earlier, I’d just change the Sun Shadow Quality setting for now, but overall, RTX definitely adds some nice ambiance to a game that really relies on the environment to draw you into an apocalyptic world where you’re trying to survive from being eaten by flesh hungry zombies.