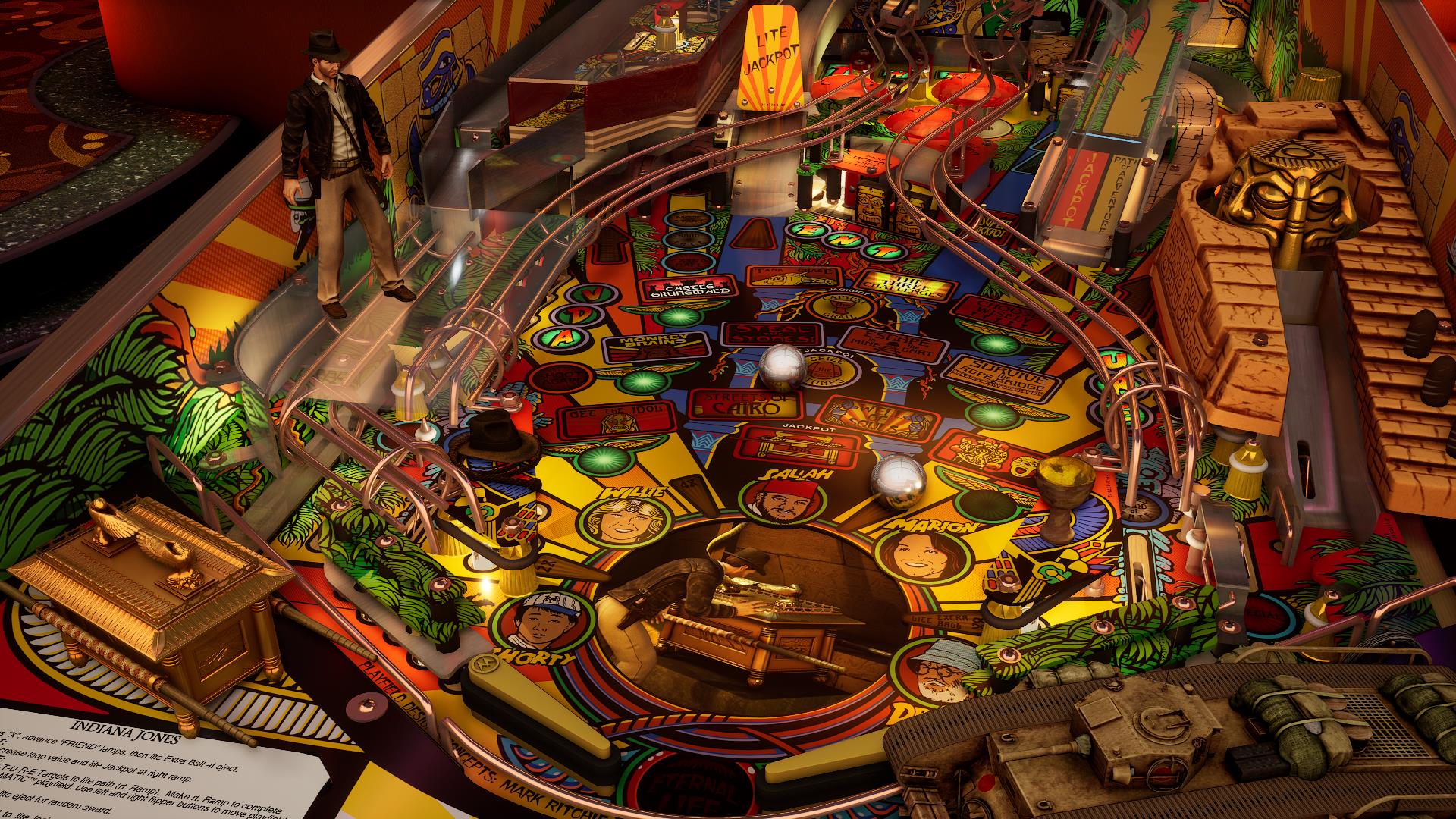 Written by Eric Hauter on 3/10/2022 for PS4
More On: Indiana Jones: The Pinball Adventure

It might seem to the casual observer as though Zen Studios has slowed down it's steady flow of fantasy pinball tables and real-world pinball simulations for its venerable Pinball FX3 platform. Nothing could be further from the truth. Zen has actually been hard at work on a new console platform - titled simply Pinball FX - which will be launching on Epic Games Store this month and on consoles later this year. It seems as though most of your currently-owned console pinball games will port over to the new platform, which will offer a bunch of fun new features, not the least of which is "Pinball Royale", which is exactly what you think it is. Zen also has a second pinball platform on Apple Arcade, which seems to focus primarily on tables designed specifically for a younger audience (but now that I know it exists, I'm totally going to check it out).

So yes, Zen Studios is just as busy as ever, but somehow they have found the time to squeeze out a premium adaptation of 1993's Indiana Jones: The Pinball Adventure. Why do I refer to this table as "premium", you ask? Well, the table retails for $14.99, which stands in contrast with most of Zen's output, which runs around five bucks per table. But this is no ordinary pinball table. Released as part of Williams' "Widebody" series (along with Star Trek TNG and The Twilight Zone), Indiana Jones: The Pinball Adventure was the first to use a new, advanced sound system that allowed for some fantastic music and voice samples to be used, including some original dialogue recorded just for the game by John Rhys-Davies. This is an incredibly advanced table, with a ton of hidden details and cool character work. An actual copy of this table will run collectors a cool $15,000, so to be able to have an extremely faithful version of the game in your digital collection for 1/1000 of that cost seems like a pretty fair deal. 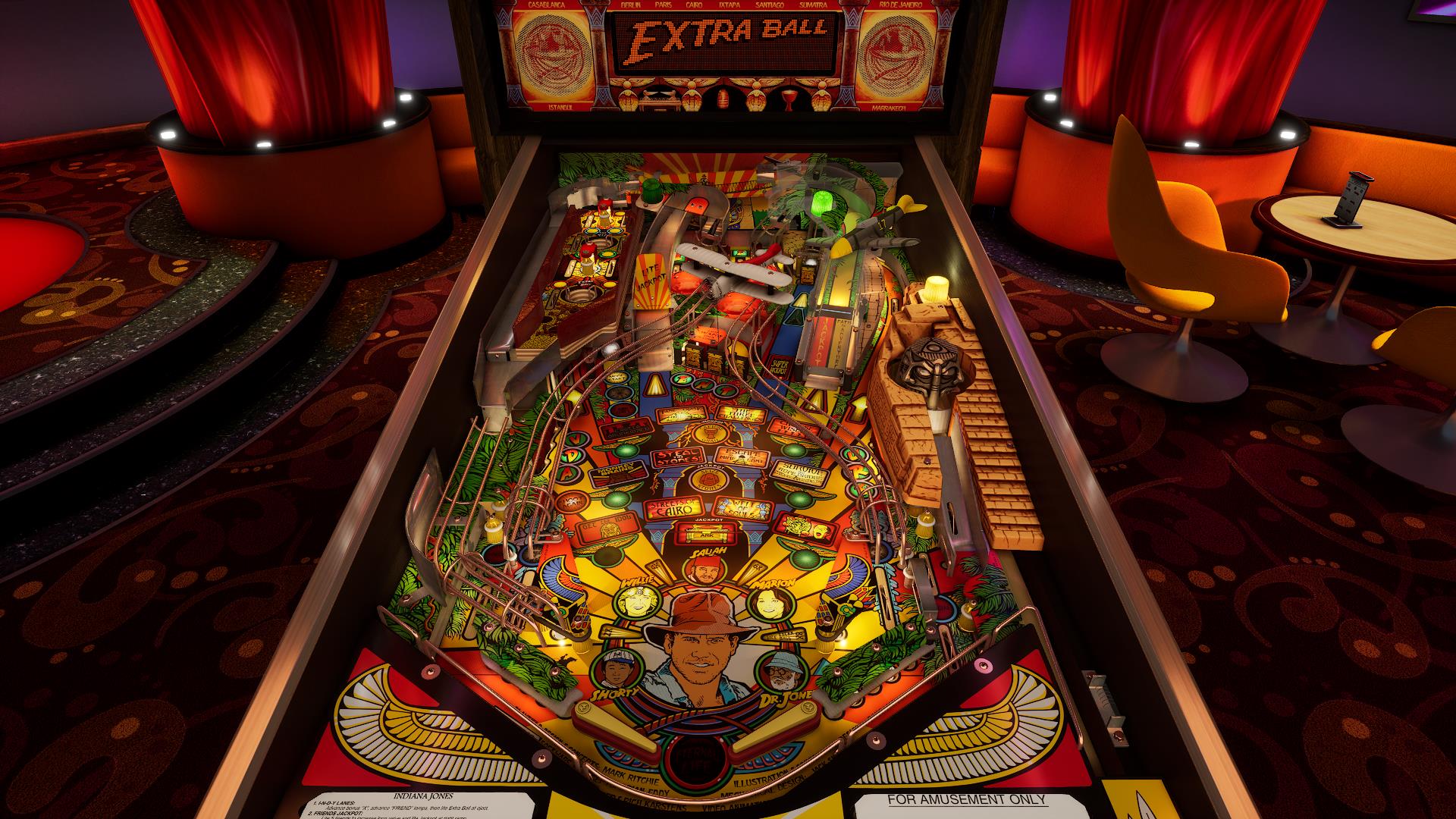 Pinball FX3 is one of those games that I never delete from my consoles. I have some version or another of Zen's platform on every console I own - which of course means that my collection is fractured and divided across platforms and generations. (And yes, I still have the South Park tables on my PS3 - where they will remain for the rest of time, along with the also-no-longer-available Plants Vs. Zombies table.) As is my habit, I've spent enough time with Indiana Jones: The Pinball Adventure to take first place on the leaderboards prior to release (I snap a picture to capture the moment, before real players arrive and relegate me to 800th place). As readers of my pinball reviews know, I am no pinball expert. Rather, I am a somewhat failed enthusiast. I'm the pinball equivalent of the guy that joins the softball team and cheers wildly even though I strike out every time at bat. My lack of ability does nothing to dampen my overwhelming enthusiasm.

Some pinball tables flagrantly defy my will to love them - I need a nice, easy learning curve - but I am pleased to report that Indiana Jones is not one of them. This is a stellar table, with tons of minigames and fun activities to try to figure out and engage with. Indiana Jones: The Pinball Adventure features moments lifted from all three of the classic trilogy films (thankfully, the table predates The Crystal Skull). One of my favorite features is the "Monkey Brains" minigame, which turns every loop and ramp into a points bonanza, giving the player millions of points for each successful trip. In fact there are tons of fun and familiar moments from the films - the market chase, the shootout at the Raven bar, a hysterical digital version of the "Choose Wisely" scene from the Last Crusade. Indy fans will smile for sure when they hear some of the music cues appear, and the voice work is top notch (We have top men working on it. Top. Men.) 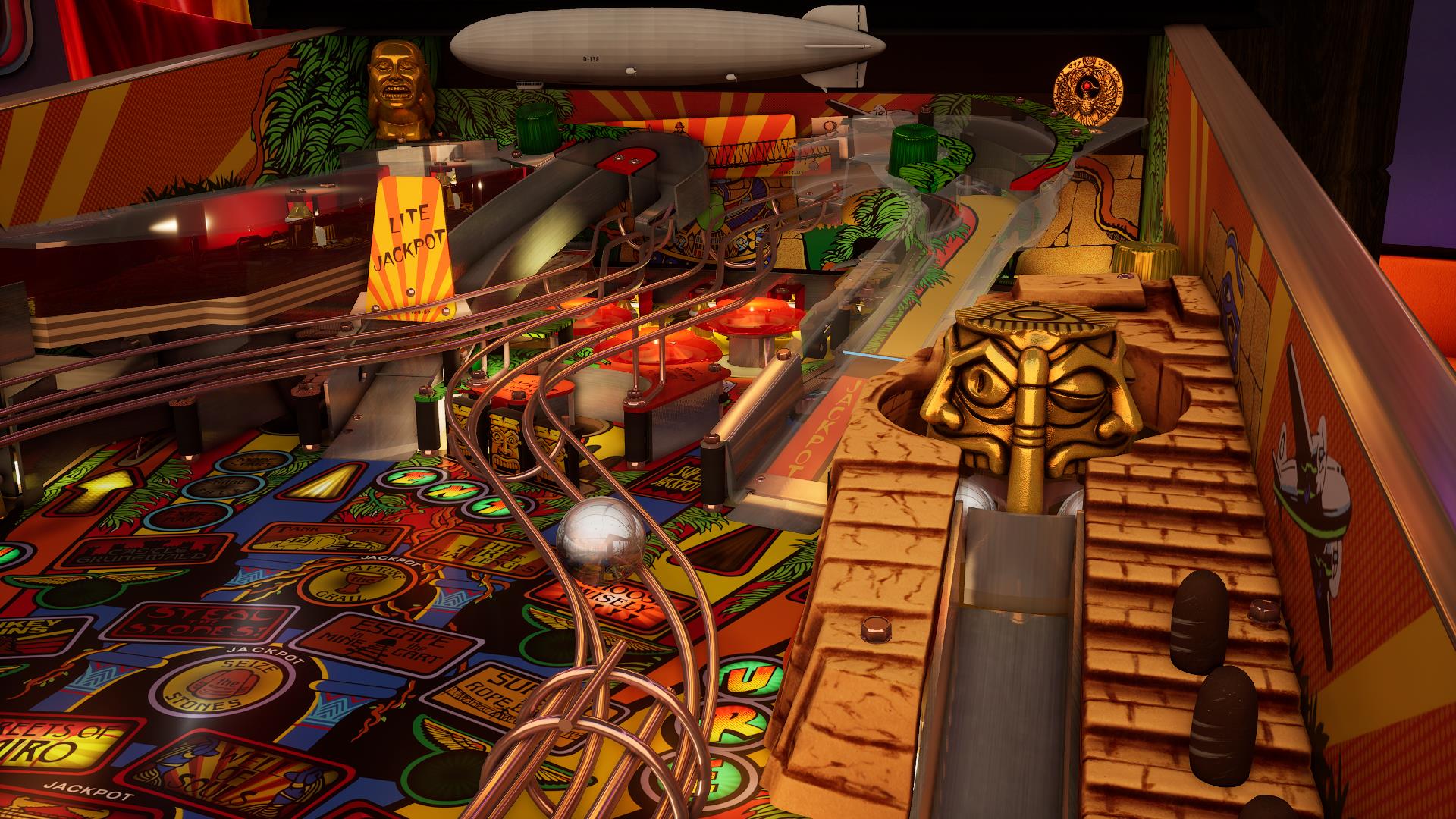 But of course, this isn't just a review of the original table, it is a review of Zen's digitization of said table, which is what makes these reviews incredibly difficult to write. There are only so many ways to say "They crushed it". With the understanding that I don't have a $15,000 physical Indiana Jones table to compare this to, I have to say that as usual, Zen Studios got this one just about as close to perfect as human work can be. With the fantasy effects turned off, this looks, feels, and performs exactly as one would expect a real pinball table to look, feel, and perform. Zen totally nailed it; they always do.

The fantasy elements on this table are fun without being overly distracting from the gameplay (you can toggle them on and off with the "O" button). A digital Indy hangs out on the left side of the table, watching you play. He occasionally swings over to lock down balls in the multiball vault, but he doesn't interfere in any way with the game. A Lost Ark sits on the left, a tank on the right. I haven't yet been able to open the Ark, but I have a feeling that you can. I tried playing the game both ways, but I definitely prefer to play with the fantasy elements turned on. I always have with Zen tables; it just feels like they add a lot to the mood of the thing. 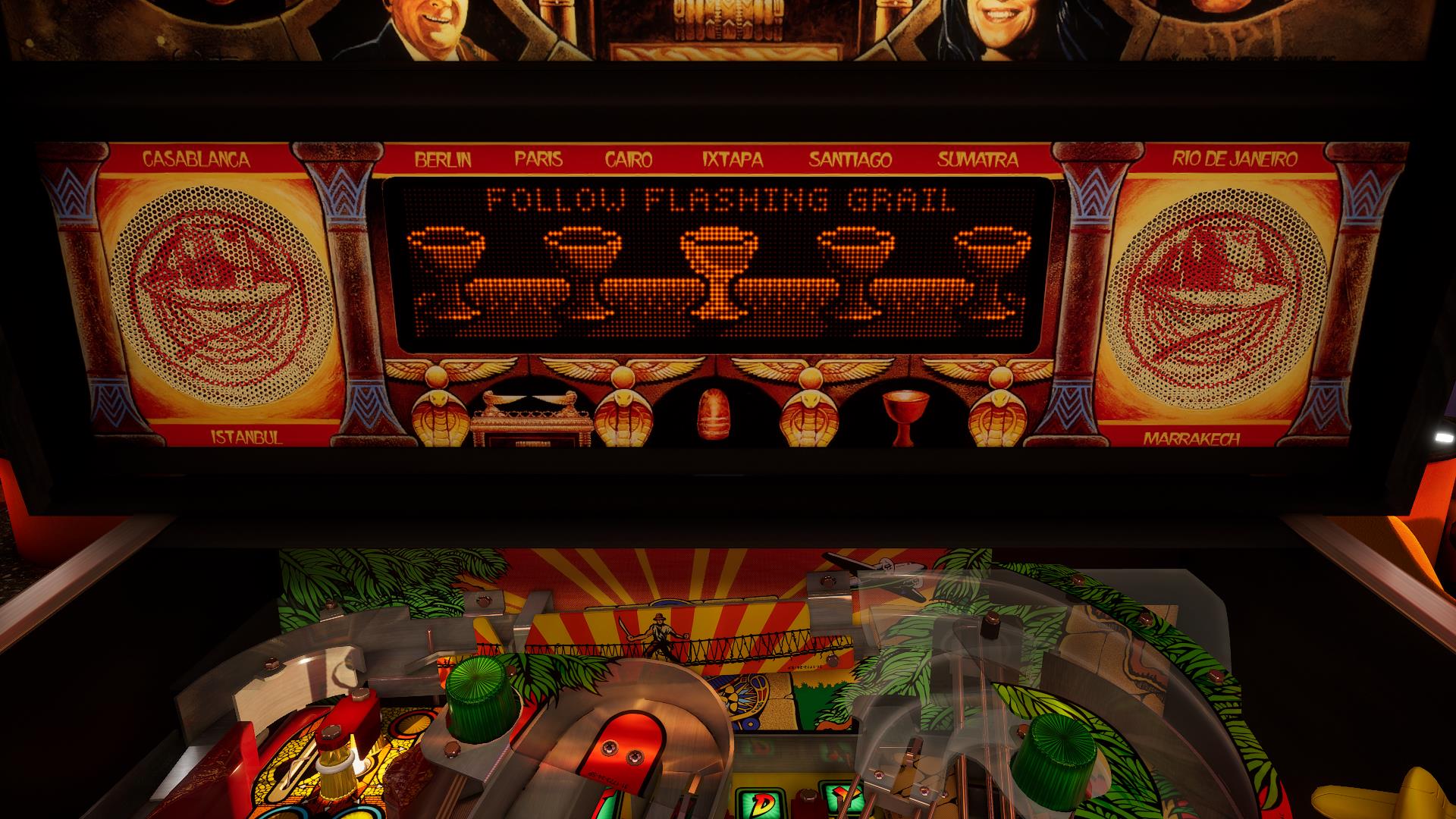 I also spent quite a bit of time with Zen's three challenge modes. Players try to see how many high they can score with one ball, or over the course of five minutes with unlimited balls. The third mode, Survival, is probably my favorite. In Survival mode, players have one minute to reach a certain score. Achieve that, and the timer resets to one minute, and the player has to reach an even higher score. The difficulty keeps ramping while the timer keeps counting down; its a great, intense way to engage with a table you really love. But of course, Pinball FX3 fans are already well-versed on what these different modes offer - until the new Pinball FX platform arrives, that is.

Fans of Pinball FX3 and pinball completionists will want to pick this table up, without a doubt. Indiana Jones fans will also likely really enjoy this table - but they should be aware that this is an adaptation of a thirty-year-old table - regardless of how stellar that table is - and not something completely new. But I'm confident that Indiana Jones: The Pinball Adventure will deliver fifteen bucks worth of entertainment to enthusiasts. Now, if it were fifteen thousand, well, that would be a different story.

The heroes at Zen Studios deliver yet another fantastic pinball table adaptation. A striking combination of simulation and fantasy, fans can play Indy's stellar 1993 table any way they please. This table is yet another example of why Zen is considered the best in the business.