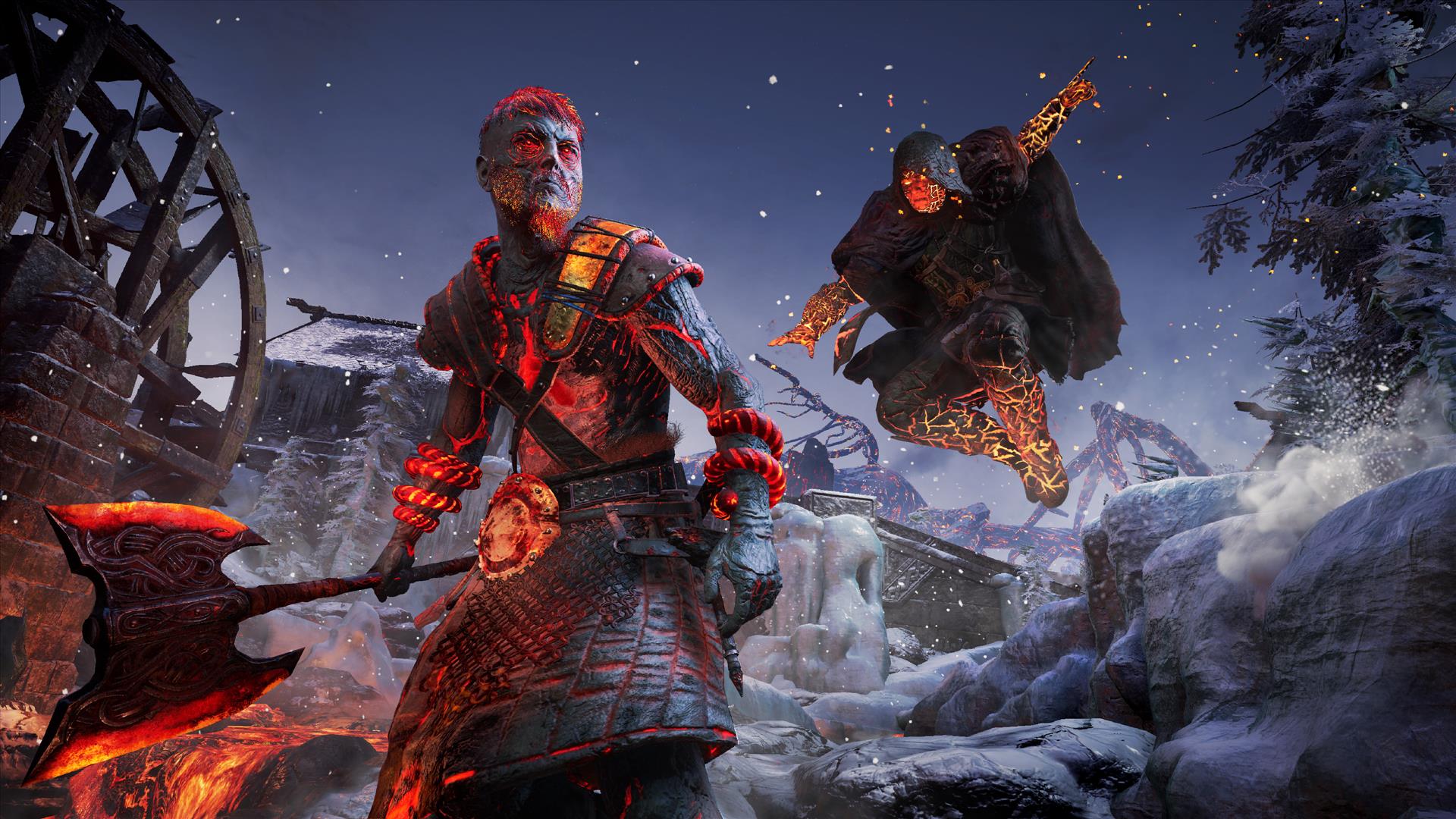 Written by Eric Hauter on 3/9/2022 for PS5
More On: Assassin's Creed Valhalla: Dawn of Ragnarok

I am a bit of an Assassin's Creed late bloomer. After messing around with the initial few games back in the Xbox 360 era, I fell off of the series for years. It was playing Assassin's Creed Odyssey on Stadia that brought me back into the fold; I was stunned at just how huge and elaborate the games in the series had become, and I loved running around the relatively realistic historic cities. I am the weirdo who gets to a new city in Greece and wanders around looking at everything, not even trying to pursue the story. After Odyssey, I picked up Origins and played through most of that, then moved back even further into Black Flag. I've dabbled with a few other titles in recent years, but these things are huge, and there are a lot of them.

When Assassin's Creed Valhalla came out a few holiday seasons back, I was excited to jump into it, all the while knowing that I didn't really have time to engage with the game as deeply as I wanted since I wasn't reviewing it. Nonetheless, I played about 15 hours or so of Valhalla before peeling off to pursue whatever I was reviewing at the time. I had a healthy respect for the title, enjoying some of the changes made from Odyssey (raids, village building) while not really digging some of the others (the streamlined gear system bummed me out a bit). I was totally jazzed when I got the chance to try out Dawn of Ragnarok, just because I felt like I didn't really have enough time with Valhalla; this would be my chance to make up for that failure. Little did I know that I was stepping into my favorite Assassin's Creed experience of all time. 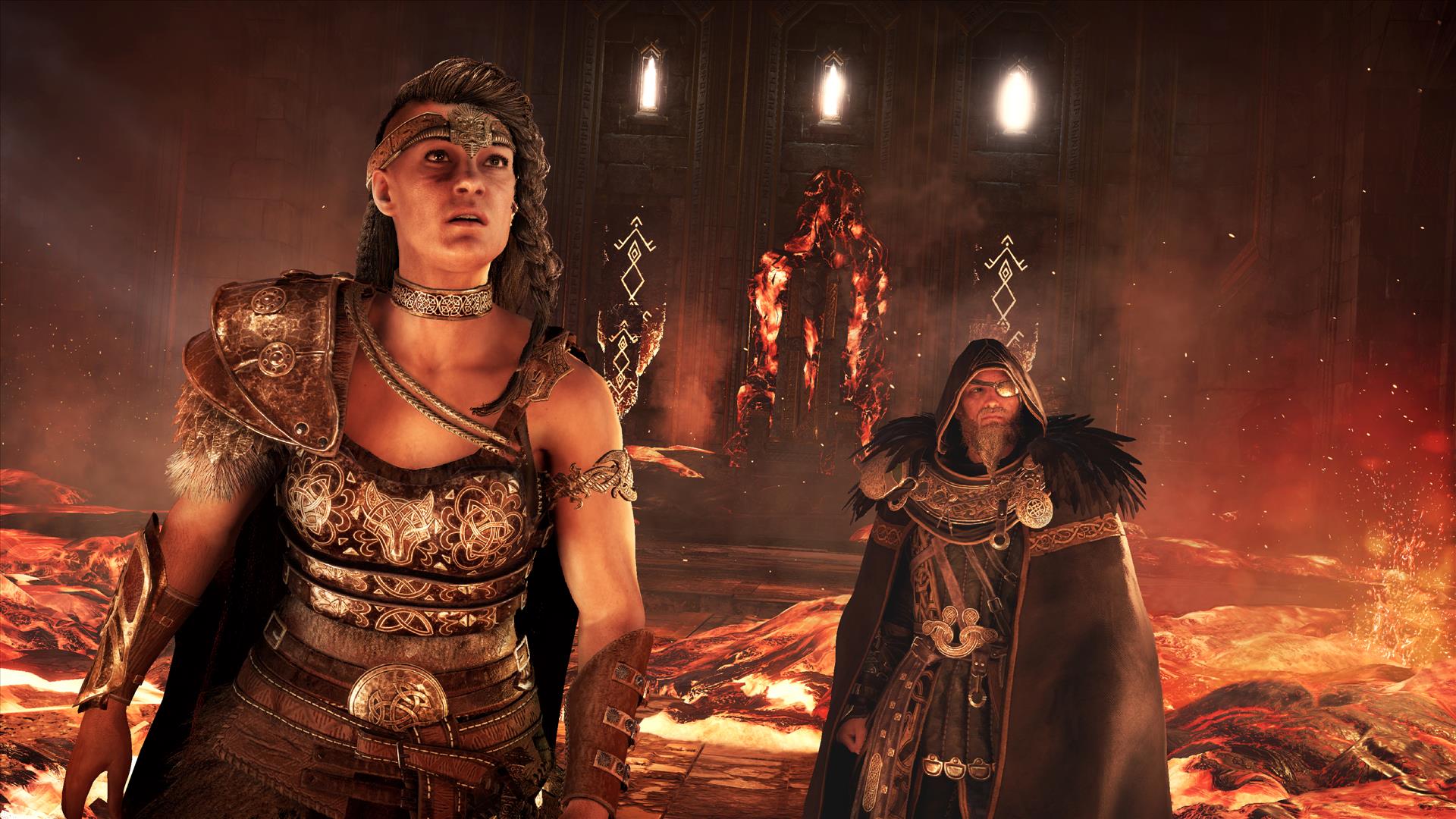 Playing Dawn of Ragnarok gives me a similar feeling to the one I had playing Far Cry New Dawn. Here are all of the familiar mechanics, the beautiful graphics and animations, the stellar writing that I'm accustomed to from the series - yet somehow, by moving the setting to someplace a little more fanciful, it all feels exciting and new. Dawn of Ragnarok extends Eivor's story into an incredible new realm of Nordic myth, riffing far deeper into world shown in the optional Odin sequences contained in the base game. And by embracing the fantasy elements whole-heartedly, Dawn of Ragnarok becomes the closest thing we have to an Ubisoft version of Skyrim or Dragon Age. No, there are no dragons bouncing around in Dawn of Ragnarok, but there are other mythical races. Muspel (lava dudes), Jotun (frozen dudes) and Dwarves all play important roles in the narrative (and elves are mentioned in passing), as Eivor (inhabiting the shoes of Odin) stomps around the tundra in an attempt to recover their son from a kidnapping.

The tone of this thing is unbelievable. While it completely throws in the towel on "historic realism" and goes full Tolkien-style hard fantasy (complete with a fantastic Frodo reference I won't spoil here), the writing and performances are still completely rooted in what Assassin's Creed would consider to be the "real world". Sure, what we are really playing here plot-wise is a drug-fueled reincarnation flashback within a computer assisted DNA time travel simulation, but forget all that. Just toss all of the AC gobbledygook out the window and take this game for what it is on the surface - a grand cruise through a beautifully visualized fantasy realm. You know how Game of Thrones was clearly fantasy, but it didn't beat you over the head with the magical elements, so it felt a little more "real" than some other fantasy properties? That's what we get here. 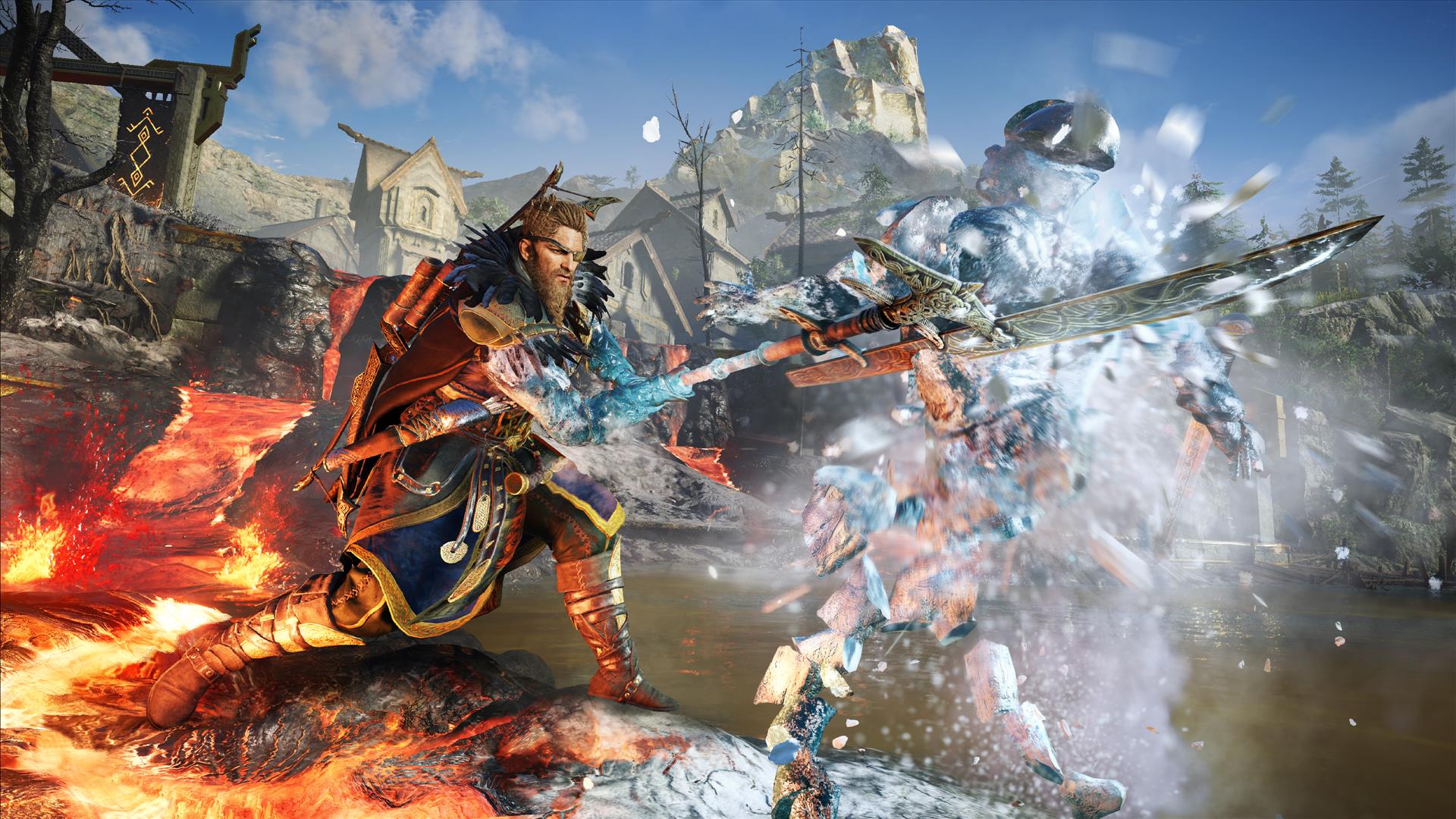 And it is absolutely jaw-dropping. Assassin's Creed games are known for their visuals, but Dawn of Ragnarok is on a complete other level. Crank the HDR settings on this one, because the burbling lava, the sparkling water, the sun shining off of the brilliant snow, all of it sears the eyes with a level of splendor rarely seen in any medium. Games just don't get much better looking than this. You know those fantastic moments when the player "Synchronizes", and the camera swoops around the landscape? Prepare to pick your jaw up off the floor.

Scope-wise, my earlier New Dawn comparison was fairly apt. While this is tucked neatly into the Valhalla experience, it could have easily been sold as a separate experience, satiating fans as a stand-alone game. The story is deep and satisfying, with enough twists, boss fights, and humorous moments to merit consideration as a full AAA title. The developers guess about 35 hours for both the story and side activities; I could see myself easily spending 50 hours messing around though, solving every puzzle and exploring every point of interest on the map. I have yet to enter a scenario in the game that feels like a throwaway; every little story moment, puzzle, and raid are top notch material. As a result, I want to see it all. 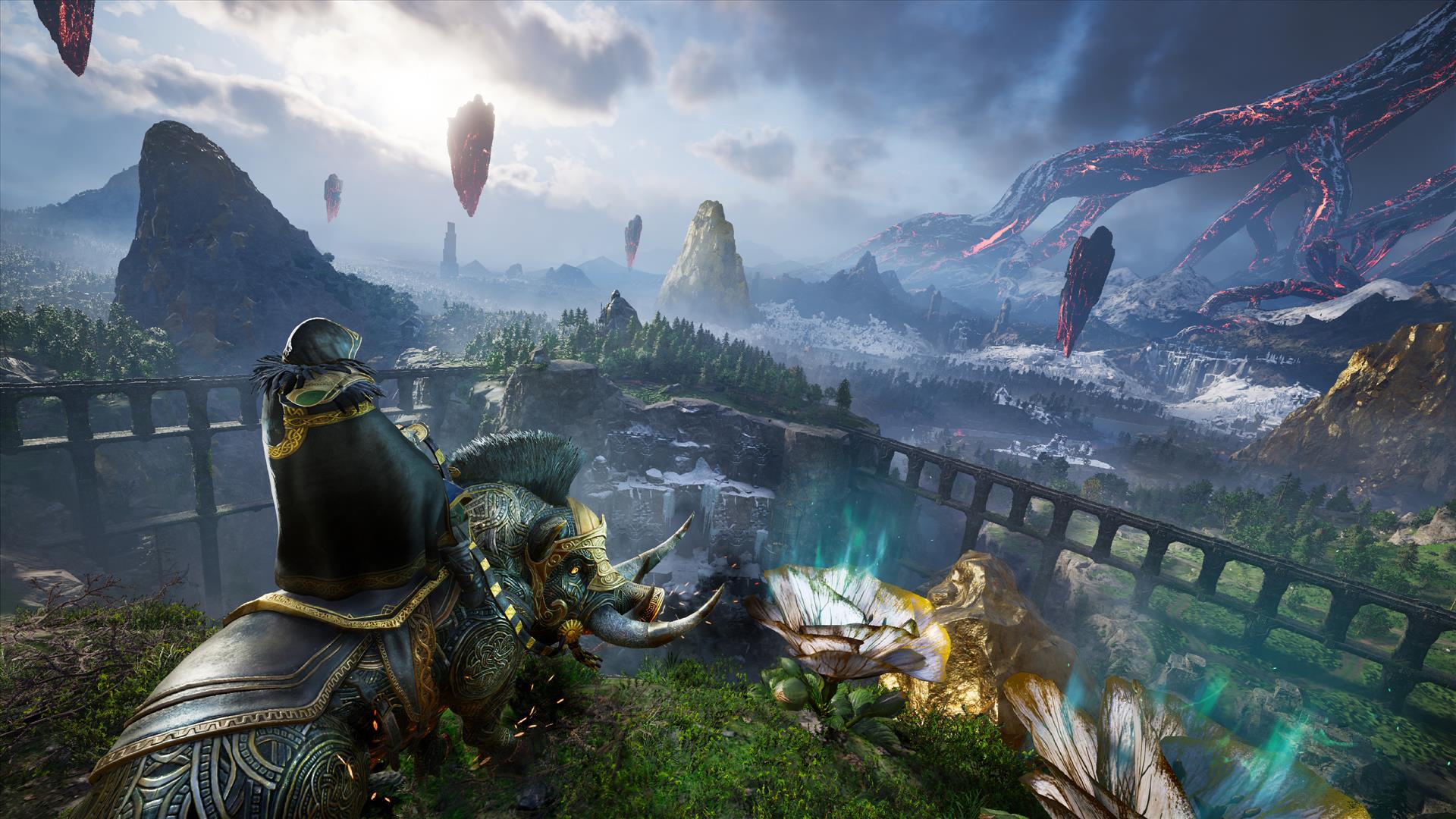 There are plenty of new mechanics to keep players occupied. New skills and abilities are scattered about the map, waiting to be discovered. Some not-too-challenging-but-still-satisfying light refraction puzzles often hide fantastic new pieces of gear (which you can take back with you to absolutely dominate the base game, if you were wondering). Raids are multi-phased and surprisingly complex. But the big sell is the new Hugr-Rip - a new piece of gear that allows Eivor/Odin to snag cool powers from defeated enemies and then use them against their foes. After beating some lava dudes, Eivor can absorb the power from one of them and then for a brief time become a lava person themselves. This allows you to stroll right into an enemy encampment in full sight, and then just start doing savage murders on the hapless fools that thought you were one of their own. And, as a bonus side effect, you can also walk on lava, which is literally everywhere in the game.

Other Hugr-Rip powers include the ability to bring back dead enemies to fight on your side, the ability to turn into a raven to reach high, out of the way places, and the ability to use your bow as a teleportation device. The Hugr-Rip is an incredibly useful gadget, but it also is not overused in the game. You can go for long stretches of time just using your standard Eivor powers, and then suddenly realize "Oh yeah, I could turn into a lava dude here, and this would all be much easier." Though if you are a Hugr-Rip enthusiast, Dawn of Ragnarok provides plenty of places to recharge the thing for another use; the game wants you to go nuts if you are that sort of player.

And that's the thing about Dawn of Ragnarok. Sure, it is smaller in scope than a mainline AC title, but it is still sprawling enough to be a satisfying open world title. I can spend hours just riding off into the map to see what I can find and be fully entertained, abandoning the story in favor of exploration and treasure hunting. It is a rare DLC that gives the player that feeling of freedom - and enough content to make it feel worthwhile.

I wasn't kidding when I said that this is my favorite AC experience yet. I'm a sucker for Ubisoft's weirdo DLCs and expansions, because I love the way the company turns its properties on their head, delivering something fresh and unexpected. But this feels like more than "just" a DLC - maybe its due to my lack of time with Valhalla, but Dawn of Ragnarok feels like a full new game, and I wouldn't mind seeing it spawn a franchise of its own. I mean, yes, I want more Assassin's Creed, but I also want more Dawn of Ragnarok. And that's probably the best thing I can say about this fantastic new experience.

Eivor steps into the shoes of Odin for a grand stomp around a gorgeously realized fantasy realm in what has become my favorite Assassin's Creed experience of all time. Great writing, gorgeous visuals, and a ridiculous amount of content make this DLC worthy of being a stand alone game. Beyond being highly recommended, Dawn of Ragnarok is an absolutely necessity for Assassin's Creed fans.