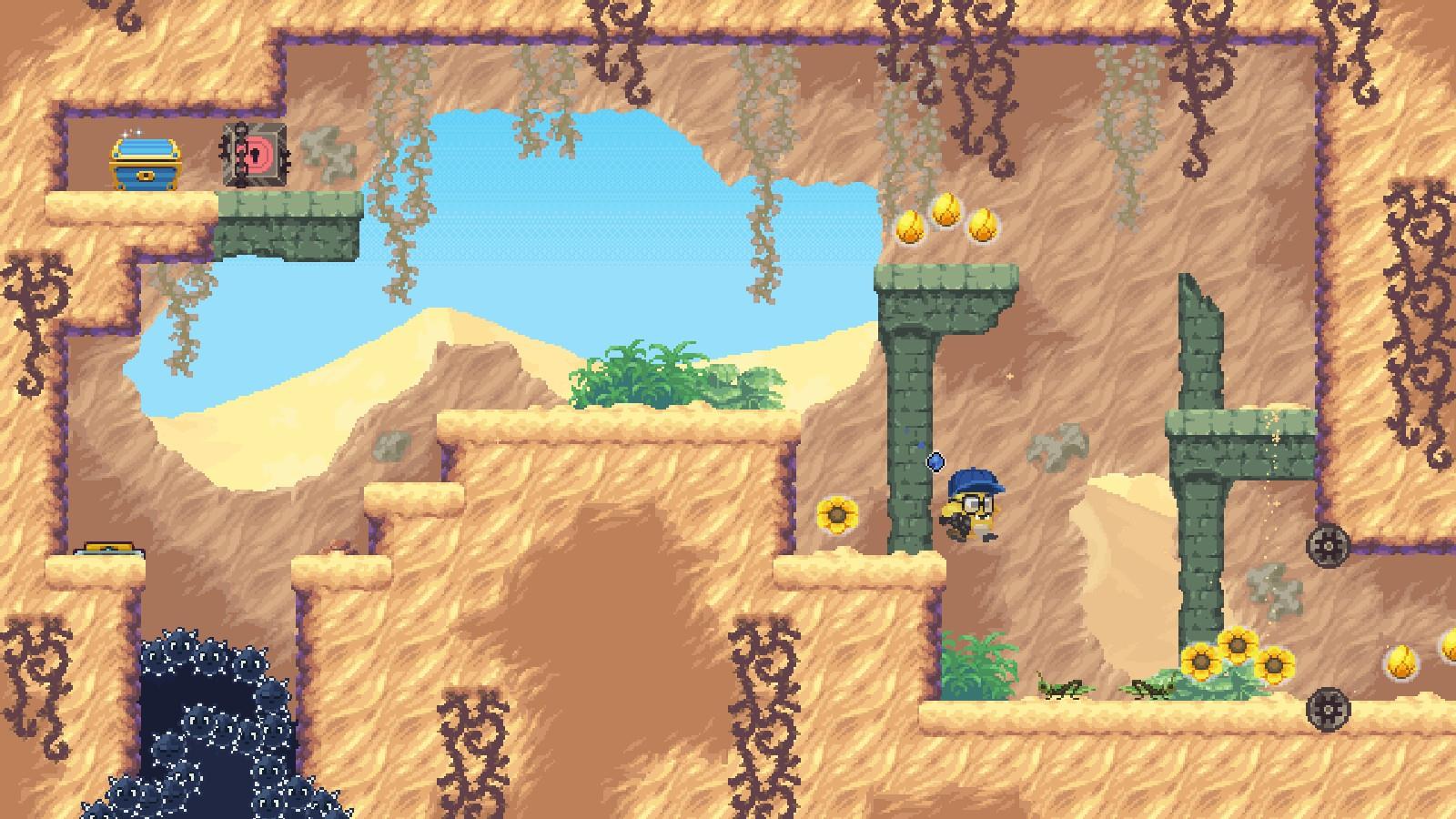 A lot of video games, especially those from the 8 and 16-bit eras, typically start you off rather easy.  The first stage is usually designed to ease you into the game, introducing you to its mechanics as well as its enemies.  Whether it was a Goomba in Super Mario Bros., an Octorock in The Legend of Zelda, or a Zoomer in Metroid, that first enemy was there to basically introduce you to what was to come and how to handle it.  When you think about it though, those first enemies don’t really get much of a chance to do practically anything.  You may die to them once, but after that they’re easily dispatched.  Well that’s about to change as for once it’s time for an underling to take the spotlight in Wunderling DX. 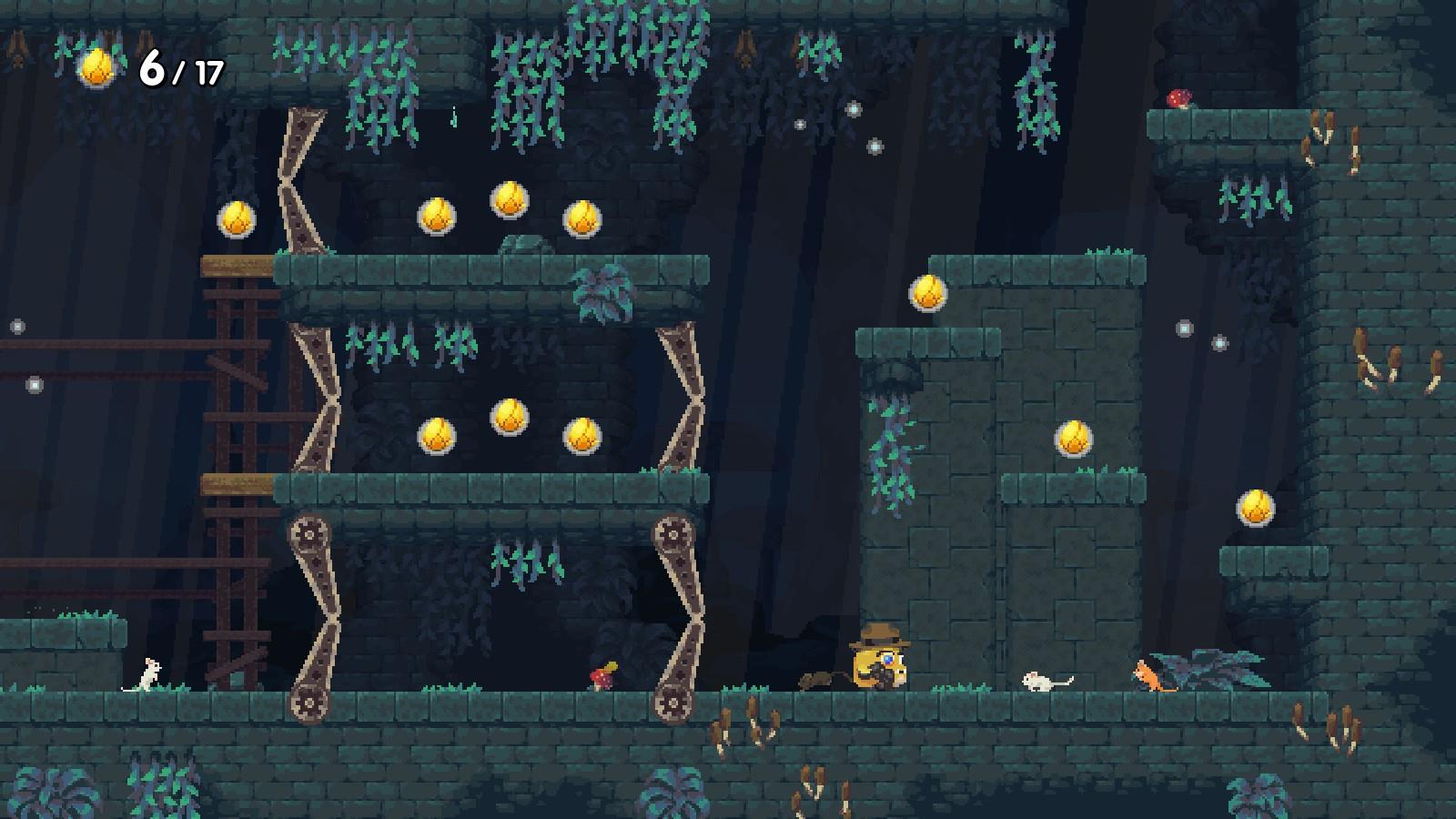 Wunderling DX starts off by putting you at the controls of a character named Carrot Man, on a mission to rescue Princess Pea of the Vegetable Kingdom. The game very much resembles Super Mario Bros. as you just traverse the level and defeat some enemies by jumping on them until you reach the end, culminating in touching a flagpole in true Mario fashion. The evil witch Kohlrabi flies in, angered that no one can seemingly stop the heroic Carrot Man, so she decides to put on a breaking news report (yes, it’s as surreal as it sounds) to paint Carrot Man as the villain and assures the residents of the Kingdom that his evil will be stopped. To do this she sends out one of her underlings to perform the task…and NOW the game really begins.

When Wunderling DX begins proper you play as one of Kohlrabi’s underlings who can basically only walk left and right. You have absolutely no control over his left and right movement; he’ll continue to walk in that direction until he hits a wall, and then he’ll turn around and walk in the other direction. What you can do though is make the underling jump - and later on he’ll gain some other abilities, like being able to briefly dash and activating a pair of wings that’ll allow him to fly, although you still can’t change the direction he’s flying until he lands on solid ground. The goal of each stage is to just reach the end, though there are plenty of things to do before you get there with every stage having a set amount of flowers you can collect. The flowers’ main purpose is to basically keep the underling alive. If you go too long without touching one you’ll see a heart appear and begin to rapidly drain. Once it empties completely, you’ll have to restart the level or restart at the nearest checkpoint if you hit one. 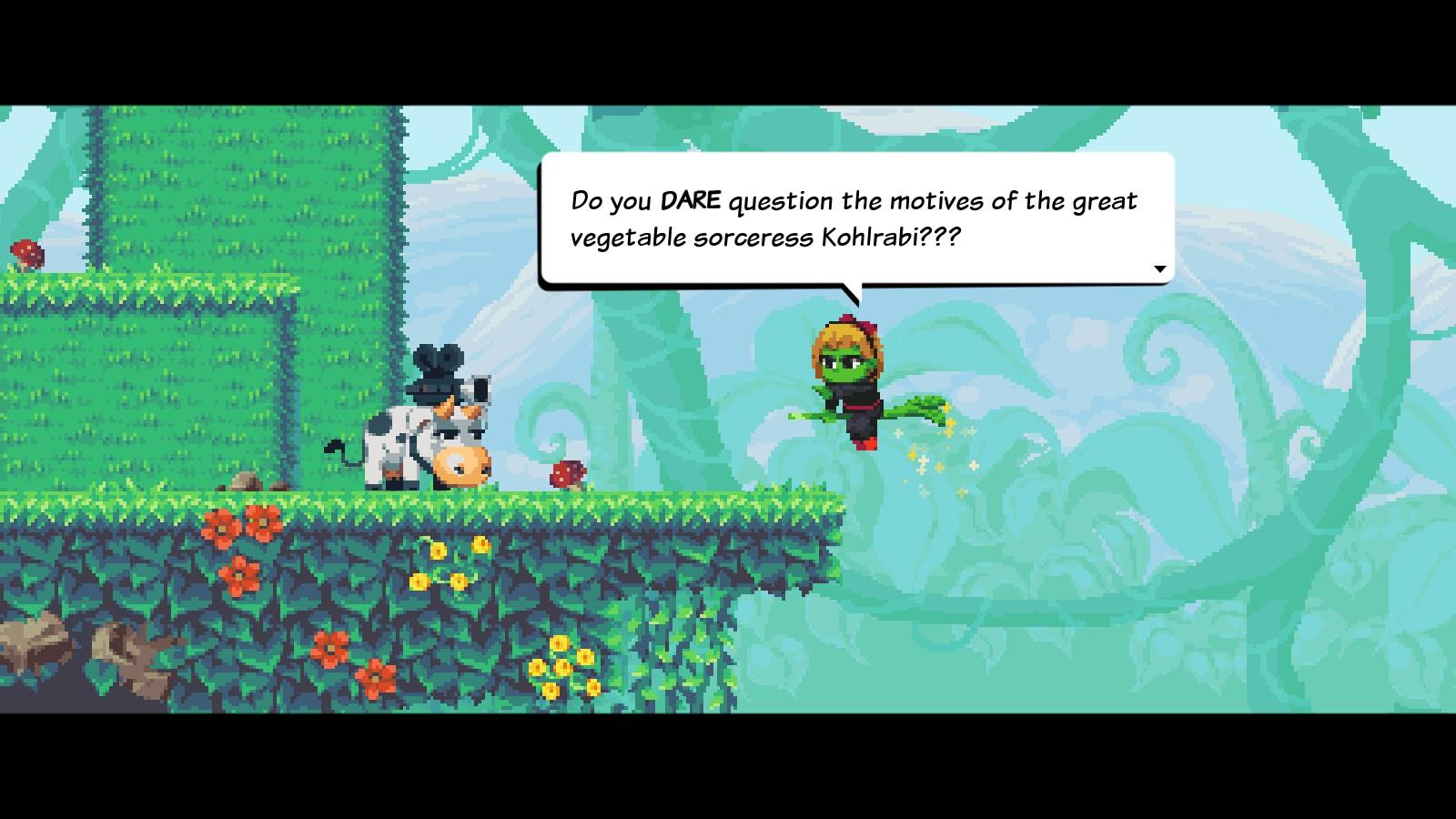 There are some other hidden things you can find as you play. Each stage has a chest you can find that will contain some sort of unlockable costume part you can use to customize the underling such as clothing, something to hold in his hand, or even a change of color. Some stages will have a cassette tape to find that will unlock a track from the soundtrack that you can listen to. Each world also has a couple of stages that have an alternate exit that, once found, will unlock extra stages that offer a bit more of a challenge and goes towards one final collectable. If you collect all of the flowers in each stage in a world, including the extra stages, you’ll unlock a page of Princess Pea’s diary that gives you a bit of a background for the princess.

If you’re like me you might see all of the things you can collect in a stage and begin to wonder if you can do it all in one shot. A lot of the time you can but you’ll soon find that not only can you not collect everything in every stage in one go, some levels will require you to do a second trip to do so. Naturally the stages with the hidden exits will because you’re not going all the way through the level so some flowers will be missed. With the cassette tapes and treasures from the chests, you have to complete the stage on that life to get credit for them. This includes if you hit a checkpoint and then die, so if you unlocked the treasure chest to get a costume item, hit a checkpoint, and then die, you’ll have to restart the stage to get that costume item again. As for the flowers, they’ll stay collected no matter how many you grabbed in a given run through a stage or even on a given life. Since flowers are the Wunderling’s source of health you can recollect them on another life or run through of the stage, but the one’s you’ve already collected previously will be fully bloomed to show you already grabbed them. 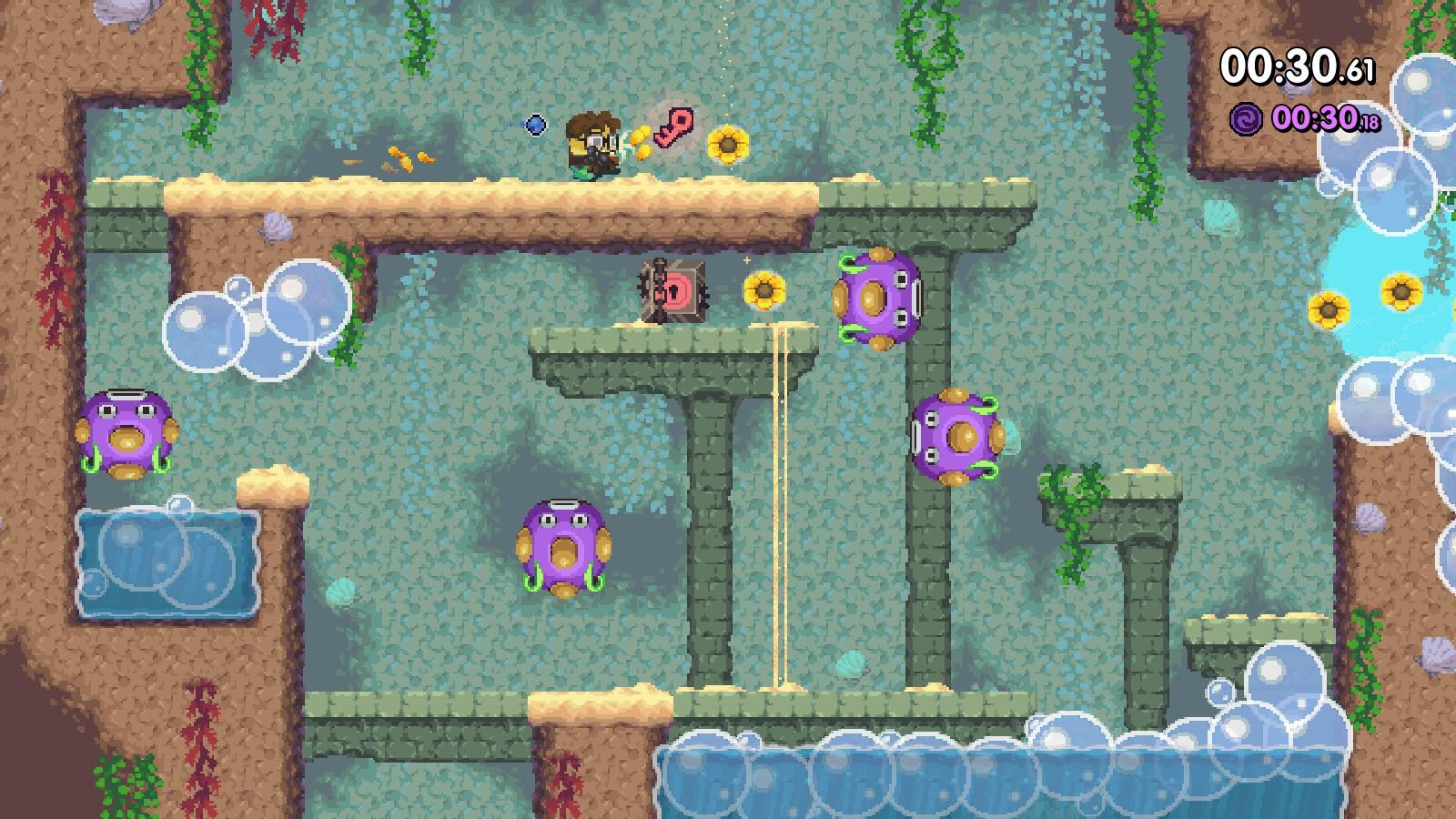 When playing through a game like this, one thing I try to do is get everything in a stage before moving on to the next one. Typically that’s fine. If there’s anything to unlock that’s dependent on the items I’m collecting I’ve probably taken care of it already. Though it seems like the only thing needed to open up the next world is to just clear a certain number of stages in the previous world. You don’t even need to clear the entirety of a world before the next one opens up. If you are planning on collecting everything, that’s where the challenge comes in. The stages are littered with obstacles, pits, and spikes that can kill you with one hit and send you back to the nearest checkpoint. You’ll gain new abilities as you progress, like the ability to dash on the ground for a moment, wings that let you fly, the ability to wall jump, and so on. However, if you got past a tough part once just to clear the stage, you might have to clear it once or twice more if you want to find everything. Another challenge can be just getting to the end portal without running out of health. If you’re just trying to reach the goal that’s not too bad. If you want to find all of the hidden collectables and secret exits, you might have to carefully plan how you collect the flowers in case you have to pass back through an area again or risk running out of health before reaching the goal.

I also enjoyed the writing of the story the more I played, as there is a good amount of humor throughout. Naturally there’s the comparison to Super Mario Bros., which Wunderling does not shy away from parodying. That said though, Carrot Man can be kind of a jerk towards the underling. In one “boss” level (which is more or less an interactive cut scene) you turn into a dragon and shoot a fireball at Carrot Man who easily dodges your shot. You’re then instructed to hold down the action button to charge up your shot and as you do so, Carrot Man taunts you a bit until your attack is fully charged, and then he realizes what’s about to happen. The game even gives another Mario reference after that scene.  Also, Kohlrabi’s assistant is a cow…yes, a cow.  As surreal as that sounds out of context it actually works for a game like this. 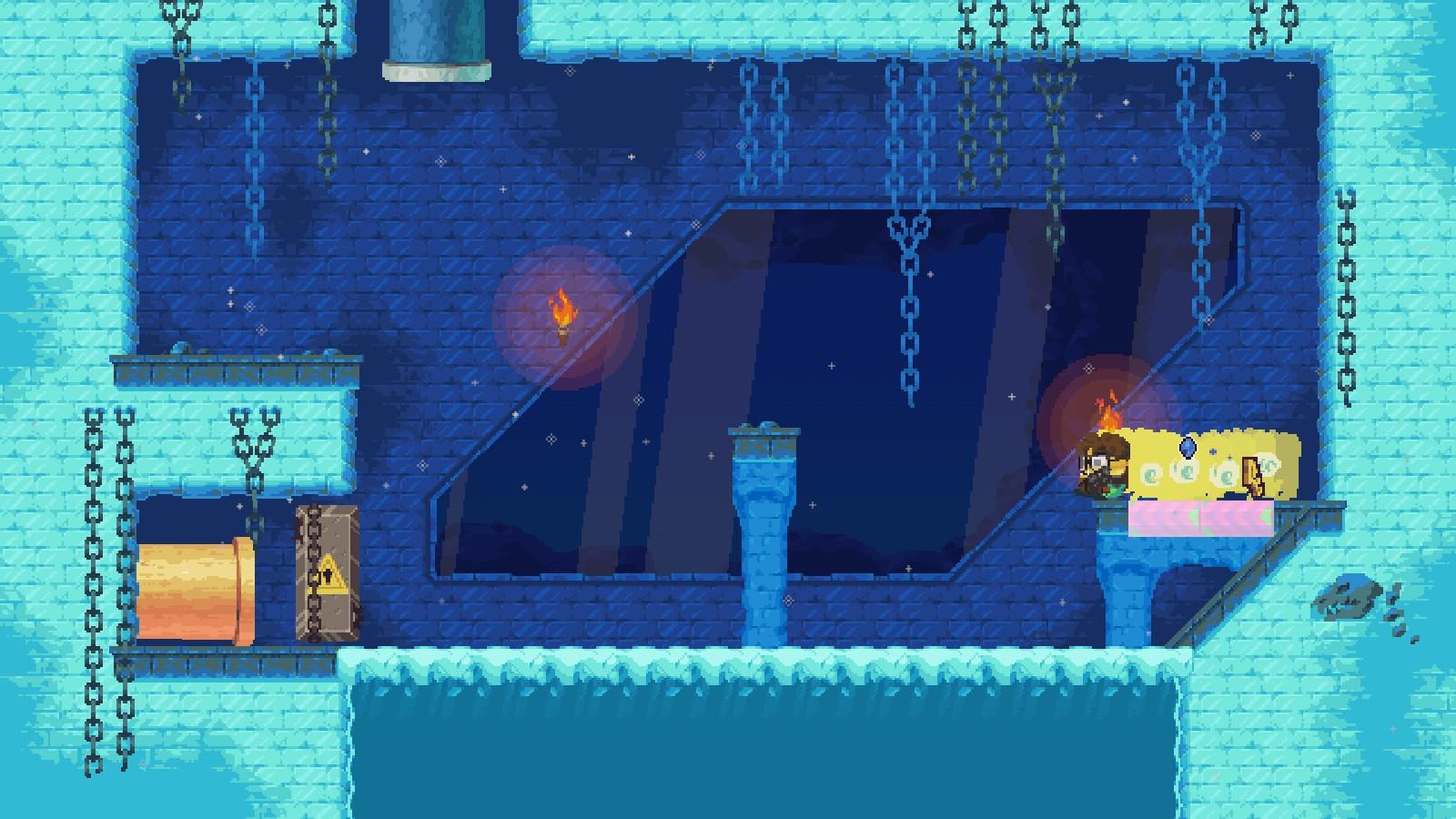 Playing a game in which you’re the villain is nothing new, but the way Wunderling DX presents this aspect is pretty well done. Granted, some people may find it a tad annoying that you can’t control which way you walk, but you are just a minion and most early game minions can only move back and forth. However weird this mechanic is, it does work pretty well in the context of the game. The graphics and music are pretty good and it’s nice to see a lowly minion reach his full potential and become an actual threat to a hero. Wunderling DX may get a bit repetitive at times but as you progress there’s typically something new thrown in to keep things fresh.  If you have the original Wunderling, the DX update will be free and will add a new world with fourteen more levels to bring the total up to eight worlds and one hundred forty-two levels between the base game and the two free updates. If you’re up for a nice charming puzzle game where you don’t mind the fact you don’t typically have full control over the character you’re controlling, Wunderling DX is a great game with a lowly minion setting out to stop a hero.  It may seem a bit backwards, but I enjoyed it nonetheless.

Wunderling DX is an interesting take on the “villain becomes a hero” concept in that you’re basically a minion setting out to stop the hero.  While I can see some players may be turned off by the simplicity of the game and the easiness of the early-going, there’s enough content and collectables to keep things fresh throughout your journey as an underling setting out to stop a hero.  As backwards as that concept may seem, I thoroughly enjoyed my time through Wunderling DX.