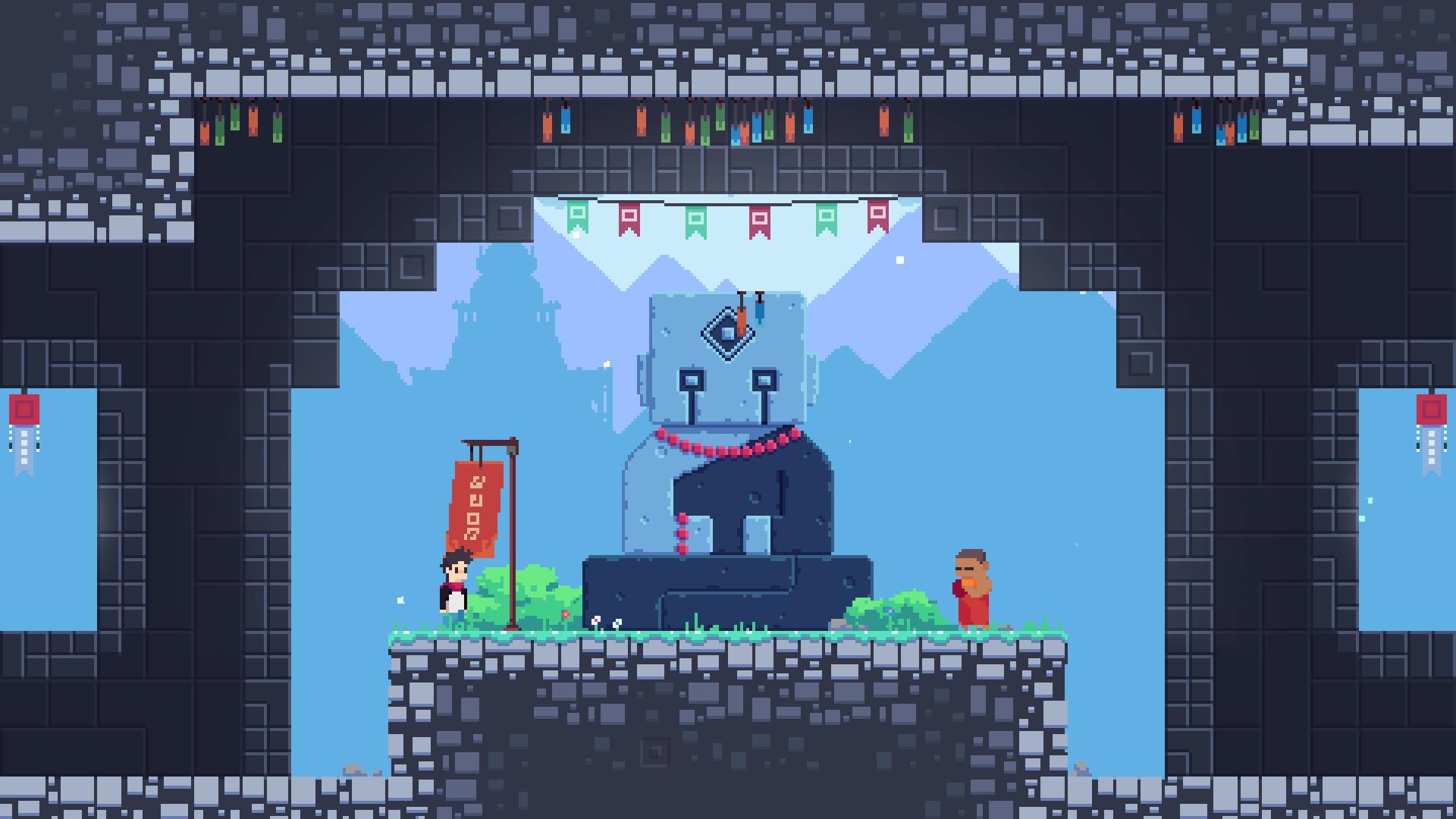 What Lies in the Multiverse

Have you ever wondered what you would be like in a parallel universe?  Would you be mostly the same as you are now, or completely different?  Would your surroundings be vastly different to the point that you don’t even recognize where you are anymore?

In What Lies in the Multiverse you play as a kid only referred to as The Kid.  The story begins with The Kid figuring out an algorithm that will let him explore other universes.  However, the computer crashes and sends him to some other universe with seemingly no way out.  As The Kid explores this new universe, reality tends to shift back and forth between the present and the future at random times.  Eventually The Kid comes across Everett, a scientist who can travel through different dimensions at will using his cane called The Voyager.  As The Kid is fascinated with the multiverse, Everett agrees to take him in as his assistant and we soon learn that Everett is on the run from a group of enforcers who just want to end Everett’s antics and get The Voyager away from him. 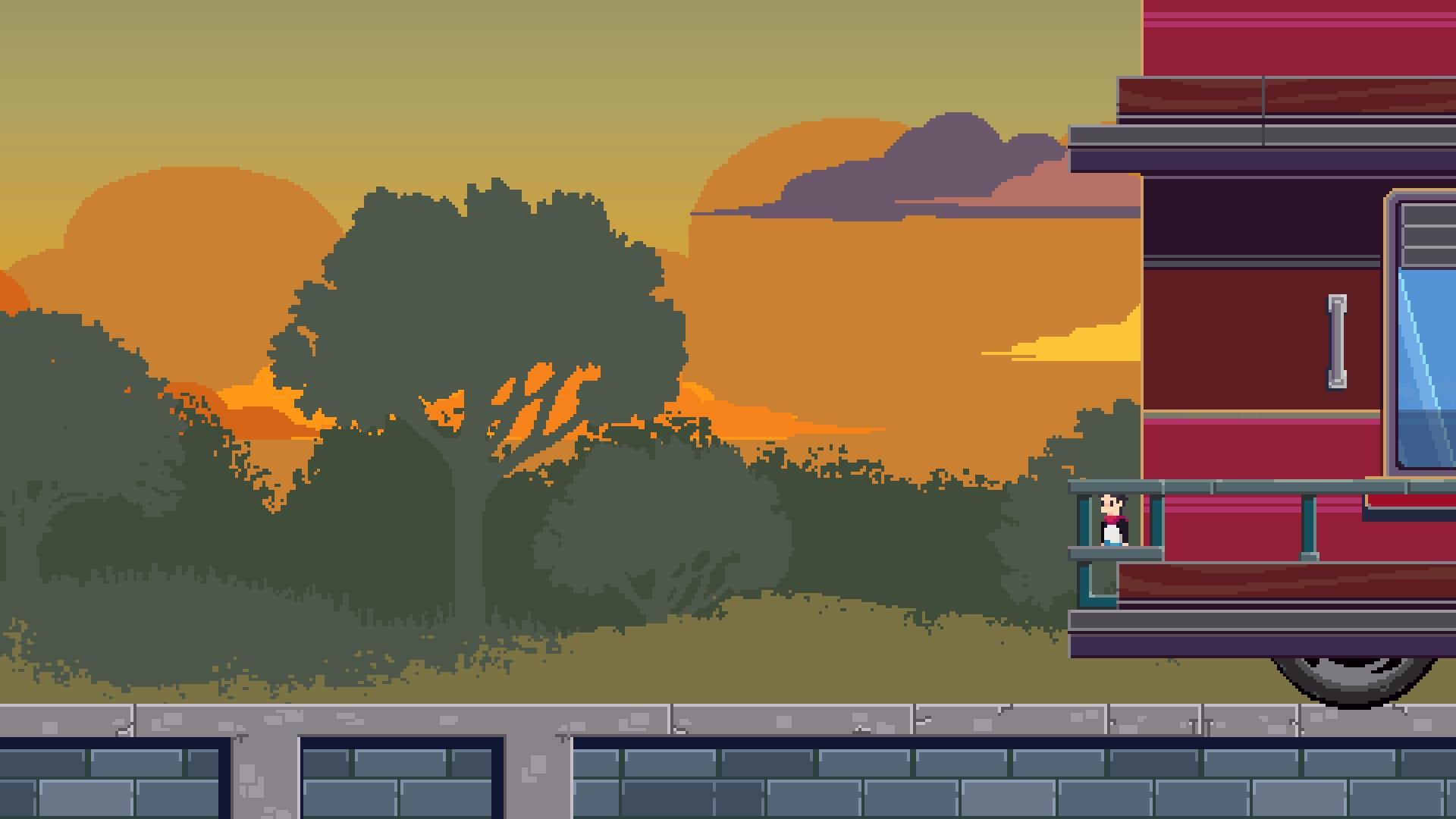 What Lies in the Multiverse is a platform-puzzle game and a pretty unique one at that.  The core mechanic revolves around using The Voyager to go between two different universes: the “normal” universe and an alternate universe that has a different mechanic for each one.  Each chapter tends to introduce a different mechanic with maybe a couple previous ones returning for a puzzle or two.  For instance, one chapter’s alternate dimension has icy ground in some spots, one reverses gravity, one introduces Interferences that flip dimensions when you cross through it, and so on.  The goal for each chapter is basically just reaching the end while using that chapter’s unique mechanics to do so.

The puzzles themselves aren’t really all that difficult up until the final couple of chapters, and even then they’re nothing incredibly complicated.  Typically it’ll be “go here, swap dimensions, maybe push a block, swap back, move on”.  Once you hit the later chapters the new mechanics do get a bit more complex.  The Interferences I mentioned earlier are typically surrounded by an area where you can’t use the Voyager to swap dimensions, meaning the only way to do so is through the Interferences.  That adds a new level of complexity because now it might be easy to see how to progress, but actually doing so requires careful planning and thought to do so.  In a later stage the alternate dimensions atmosphere is poisonous so you can’t remain there for very long.  Now imagine trying to combine that with quick movement through the alternate dimension where you have to travel through an anti-Voyager field and hit an Interference before you die.  Again it’s nothing too difficult and dying doesn’t really set you back far, usually to the start of the current room, but it’s nice to see how the mechanics can all be combined to make more complex puzzles. 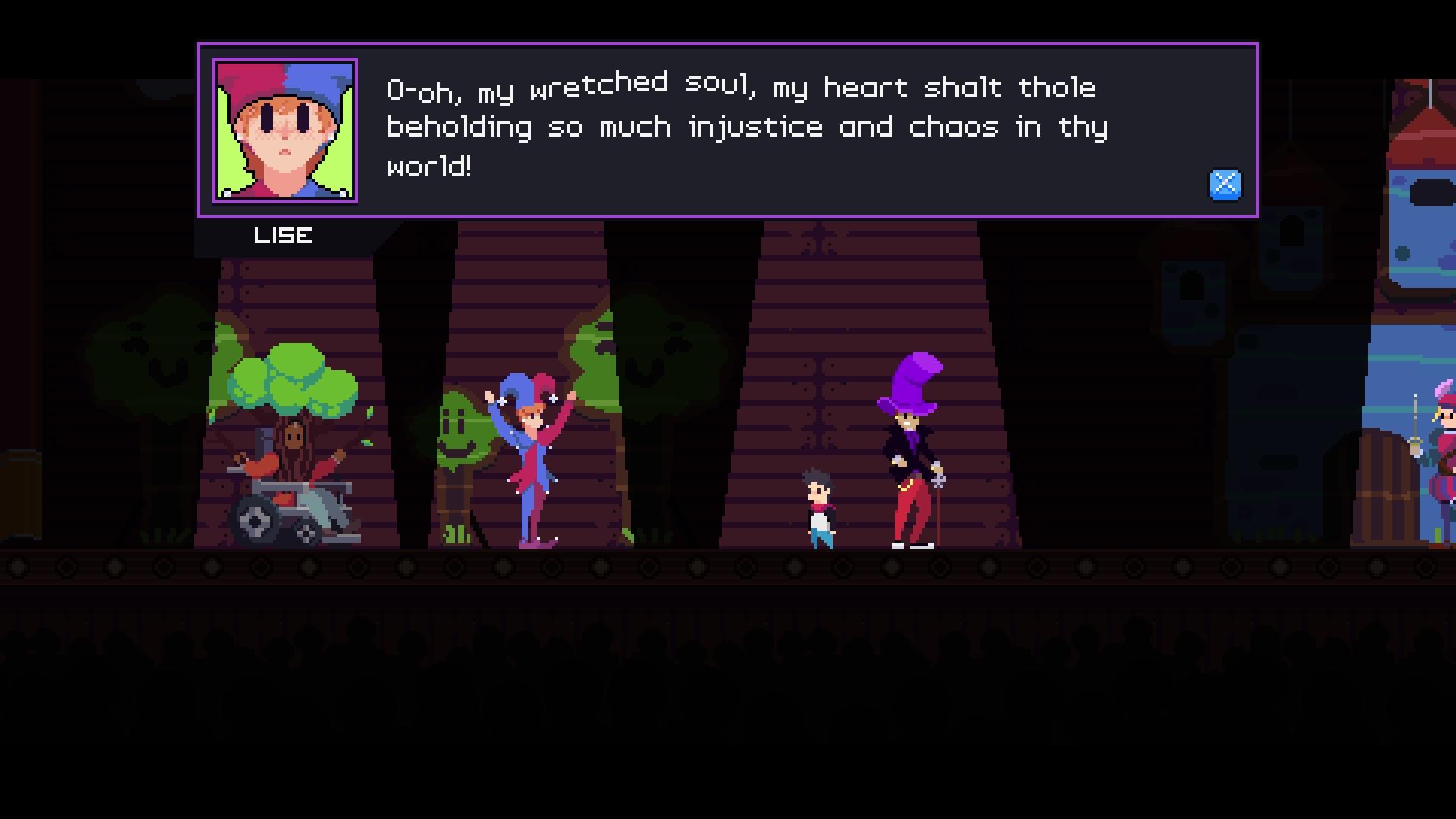 While the overall lack of difficulty in the puzzles can be a bit off-putting, the story is another matter altogether and, to me, is where the game really shines.  When The Kid first joins Everett, the scientist is reluctant to have him along as an assistant; later on the player learns that Everett had a prior assistant and something had happened to him.  Everett begins to warm up to The Kid as the game progresses to the point that they consider each other friends.  Even the villains, a group known as ZENITH, mostly come off as likable…I’ll get to the “mostly” in a moment.  The story’s good writing results in some pretty humorous moments between Everett and The Kid as well as between the heroes and the members of ZENITH.  However, the writing isn’t one hundred percent great, and this is where the “mostly” thing comes in.

While I did enjoy the story there were some moments that made me wonder if they did go a little too far.  While I try to avoid story spoilers in my reviews there are a few reasons why the game is rated M for Mature aside from the strong language.  There are a couple of moments starting around Chapter 5 that deal with some sensitive topics: one being a censored insult one of the ZENITH members throws at another and it can be implied what it is, while the other is something Everett says to that same ZENITH member not much later on and we see the eventual impact it has.  Both moments were kind of shocking when they came up and again it had me wondering if the writing went a little too far in those moments. 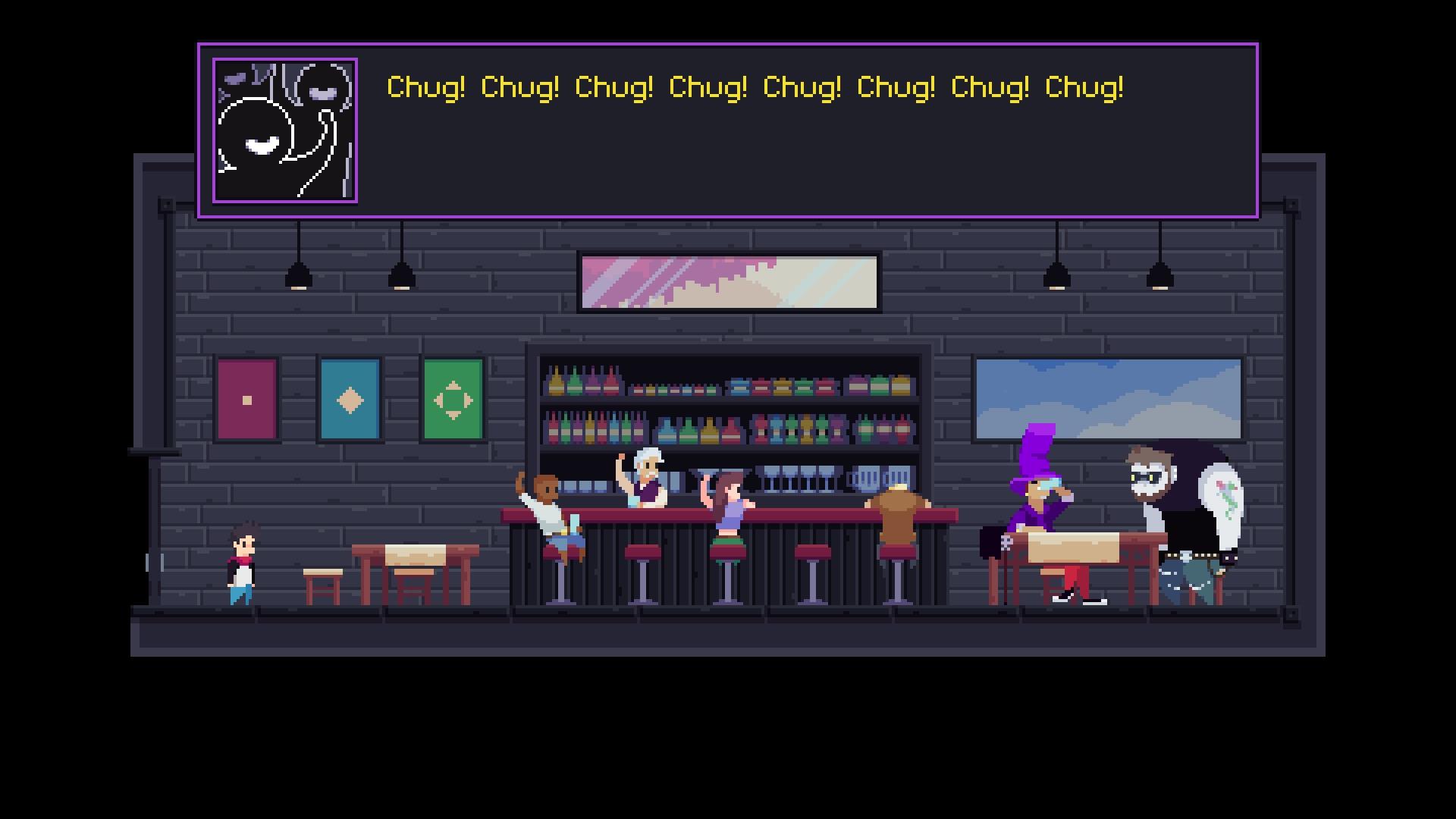 That being said though, the rest of What Lies in the Multiverse was very enjoyable.  If you’re an achievement/trophy hunter you’ll likely get a kick out of obtaining them.  Some are your typical “complete the stage” achievements, but then there are ones that can be a bit tougher to figure out.  From swapping universe rapidly several times until you get dizzy to finding unique ways to die (drown, get crushed by a block, and getting swept away by a river are just a few).  There are also memories you can find in each chapter that, once found, unlock an alternate ending.  Getting those memories, as well as some other achievements, requires you to basically search every nook and cranny of each stage, experiment with the different universes, and talk to everyone as many times as possible. This adds a few welcome RPG elements to what is otherwise a solid puzzle platformer.

When I first saw the promo image for What Lies in the Multiverse I wasn’t quite sure what to expect other than one character looking like Willy Wonka with a taller hat.  After playing through it I can definitely say it’s one of the more enjoyable games I’ve played in quite some time.  I’ve stated before that I’m a fan of both platformers and puzzlers and while the puzzles aren’t all that difficult until the last couple of chapters, I still had a very pleasant time through the game, one or two minor things aside.  If you just want to play through the game and not worry about collecting everything or achievement hunting, it’ll probably take a few hours to get through so it’s not incredibly long.  Still, for fifteen dollars it's definitely worth checking out if you’re in the mood for a fun puzzle-platformer with a great story and some fun humor along your journey to discover What Lies in the Multiverse.