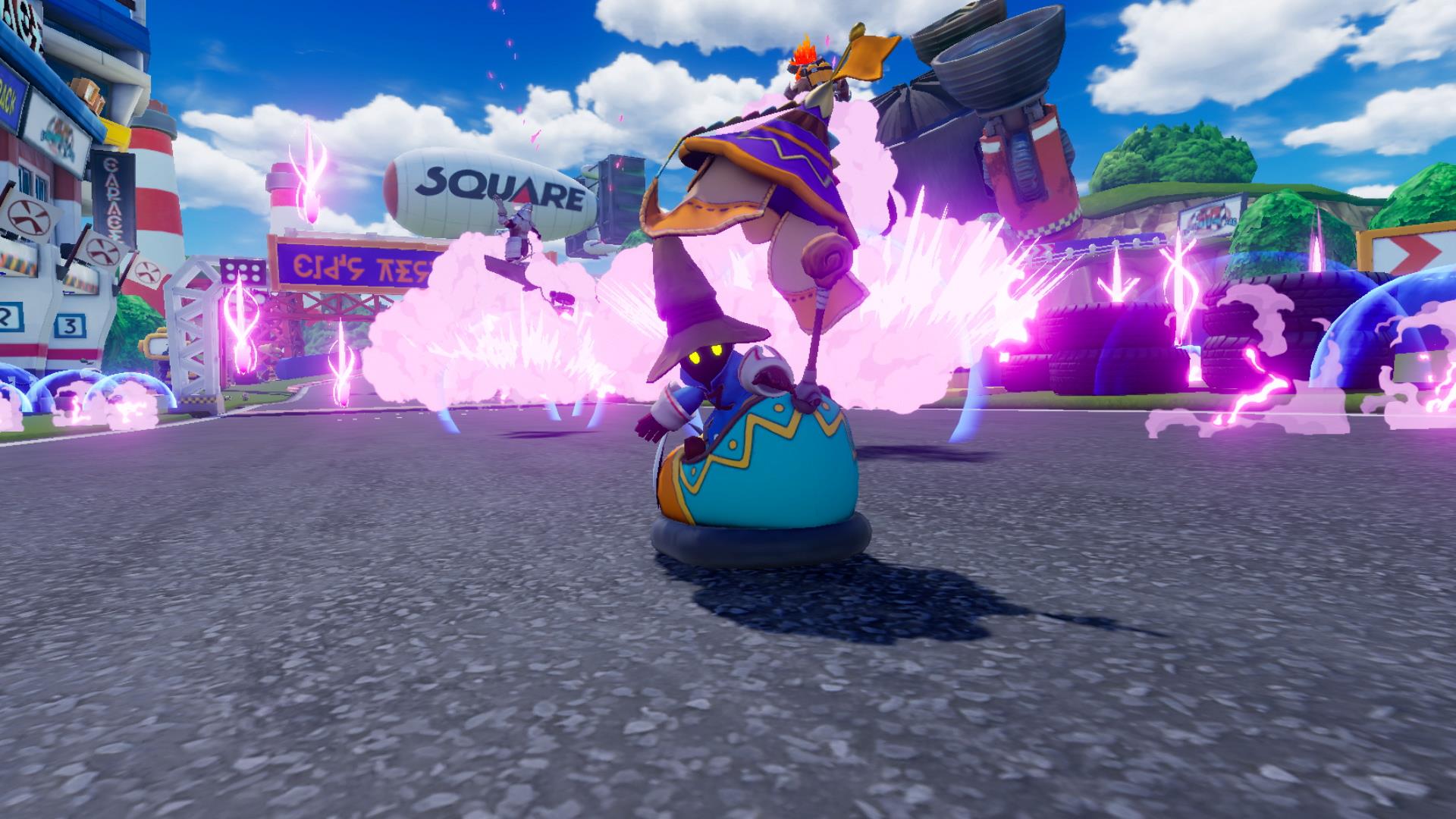 It is not terribly often that I decide to willingly engage with a kart racer. I get roped into playing Mario Kart with my family pretty regularly, but in general, I find the random nature of these games to be deeply frustrating. I can’t stand leading the pack for an entire race, only to be blasted from behind as I’m about to cross the finish line. Further, I don’t like being at the back of the scrum, only to have a sudden change of fate propel me into the lead. It feels like cheating, even though sudden role reversals of this nature are built right into the DNA of this genre. You’re supposed to roll with the sudden shifts in status. But I just get mad.

But something about Chocobo GP caught my eye. Maybe it was the Final Fantasy IX characters I saw in the trailer (FF IX is one of my top five Final Fantasy games). Maybe it was the fact that you could pilot a tiny kart in the hulking body of one of FF’s gigantic and powerful summons. I think part of it was my curiosity about how the game was going to adapt Final Fantasy’s well-known and much-loved magic system to a kart racer. Whatever it was, I took the leap. I was in. 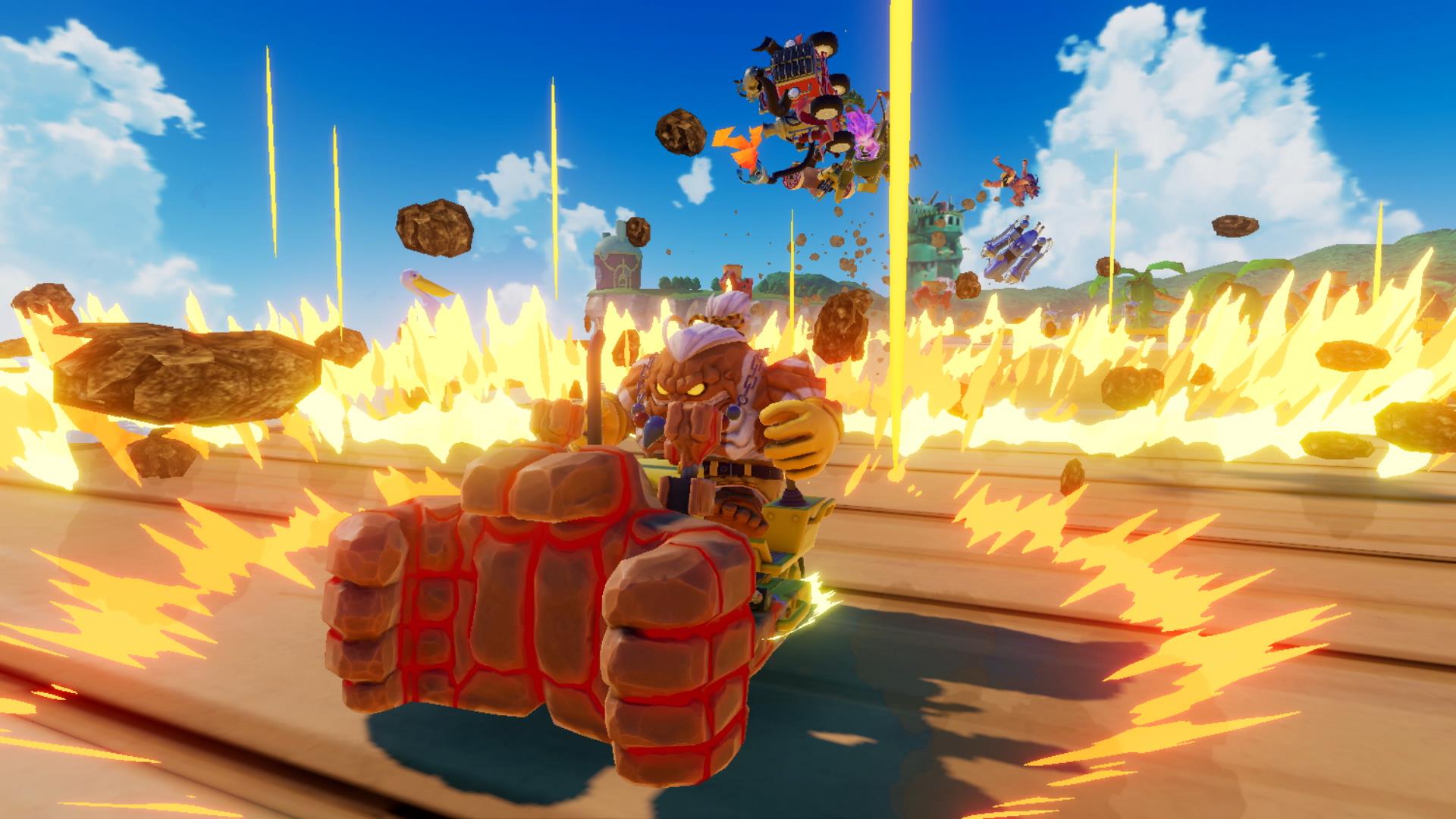 What I found is a very familiar feeling kart racer – so familiar in fact, that my nine-year-old daughter was able to pick up the controller with no instruction whatsoever and compete competently, using the muscle memory she has built up over hours and hours of Mario Kart racing. The controls are very much the same; the A button accelerates, the L button fires off powers, the R button drifts. Chocobo GP is not a game that is interested in rewriting the manual, but that does have the benefit of making it incredibly accessible to Mario Kart fans.

Of course, this game is slathered in a fine gravy of Final Fantasy goodness, which basically means that it is very, very weird. From the metal version of the Chocobo theme song that greats players upon loading up the game to the bizarre, nearly nonsensical cut scenes, Chocobo GP is dripping with the boppy, trippy strangeness that the Chocobo offshoot branch of the Final Fantasy franchise is becoming known for.

It is best to kick off your experience in Chocobo GP with a quick run through the game’s story mode, which is used to unlock the majority of the game’s characters and tracks. I’m not even going to try to recap what was going on in this story. Something about the winner of a series of races being granted a single wish. But that all quickly becomes lost in the shuffle. 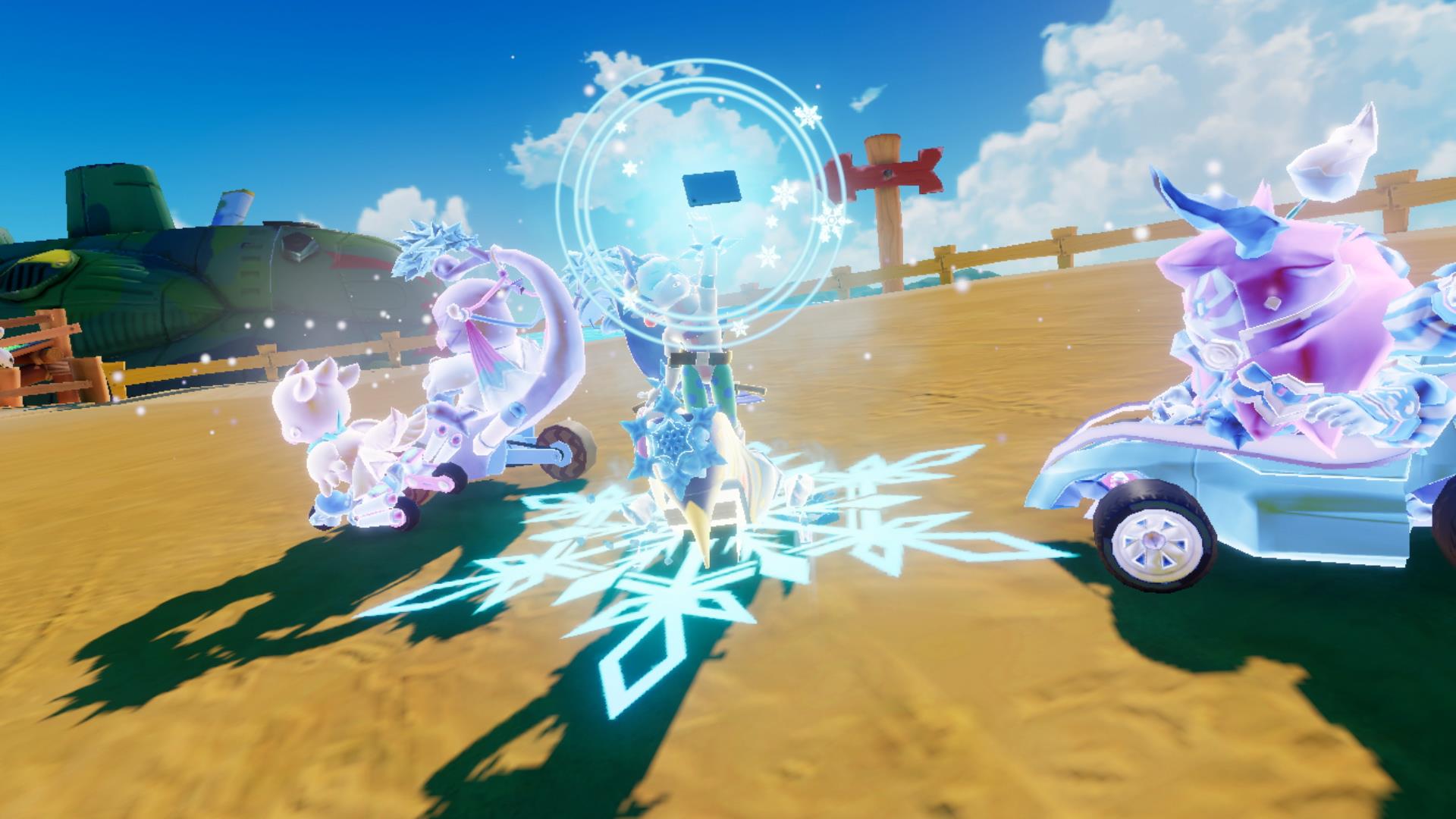 There is dialogue there, but most of it is just the characters chattering away at each other to establish the stakes for the next race, and I’d say that only about 30% of it makes any sense at all. Still, it’s not unpleasant in its own brain-melting way, and players that are easily irritated by the noise can quickly skip past the dialogue. I particularly enjoyed the way that the “Chocobo” character adheres to “Pluto rules”; all the other animals (including other Chocobos) can talk, but Chocobo himself is limited to the word “Kweh”.

It is important to note, however, that the story becomes stupid hard towards the end. For whatever reason, the player suddenly has the character pool reduced to the earliest chumps in the game, and whichever they choose, they lock in for the remainder of the game. Chocobo GP then decides that the player must finish every race for the rest of the game in first place, which is a lesson in controller-smashing difficulty, even in Beginner mode. This game can be tough as leather.

But no one is here for the story, right? We’re all here for the racing, and so I am pleased to tell you that the racing is pretty good, actually. It is exactly what you are expecting – the familiar formula has been perfectly copied and deployed here. You aren’t going to find many surprises, but you also won’t be disappointed.

The biggest way that Chocobo GP distinguishes itself it through its power set, which mimic the basic magical powers in the primary Final Fantasy games. Fire, Blizzard, Water, Aero, they are all here. Players have three slots to fill by picking up power-eggs liberally scattered around the track. Pick up more than one of the same kind (or nab the more powerful golden eggs) and the powers become more powerful. Get two fires, and suddenly you have a Fira. Grab another one, and you have a Firaga, which makes a very big boom indeed. 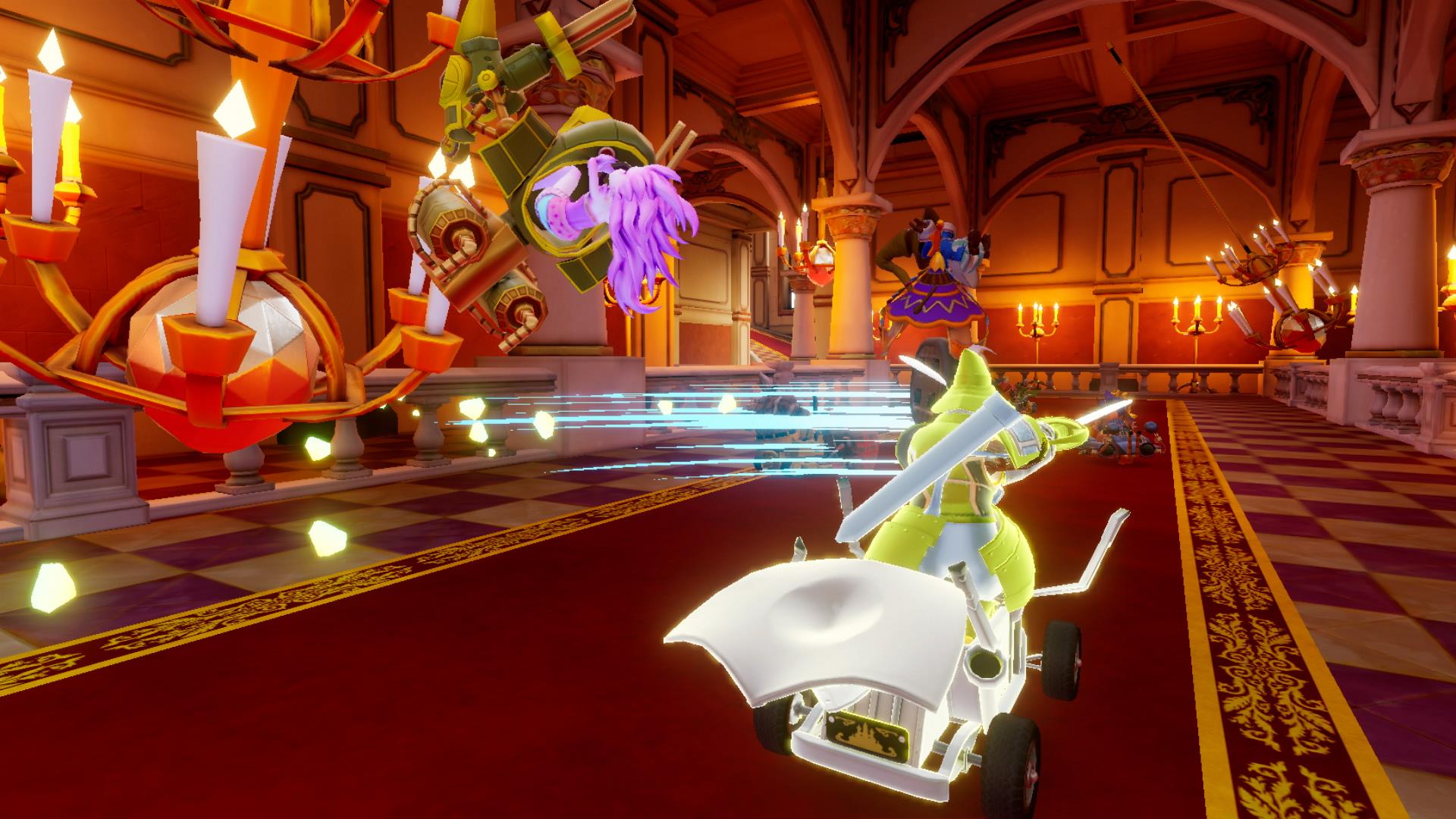 I quickly found a few favorites among the power set. I really enjoy the “Swap” power, which drops two portals on the track. Go through the correct portal, and you are warped ahead on the track. But hit the further portal, and you are sent backwards, meaning that the Swap power can be used as both a boost and an attack. I also really liked the Bahamut powerup, which is more rare, but is devastating when deployed at clutch moments. This turns the player character into the flying dragon Bahamut, and zips them forward along the track, scattering any clowns that are unfortunate enough to be in your path.

The character selection is about what you would expect. Each character has its own strengths and weaknesses. This one has better traction around turns, that one accelerates like a bat out of hell. Later in the game, you can customize the characters’ cars to push their proclivities more in a direction to your liking. Each character also has a special power, which are game-changing ultimate abilities that vary in usefulness. Bottom line – no matter how you like to race, you’ll find someone here that will work for you.

I consider myself to be pretty familiar with the Final Fantasy franchise, but I was a little lost on some of these folks. Beyond a hearty selection of Chocobos and Moogles, the player gets Cid (of course), Vivi and Steiner from FF IX, several unlockable summon characters, and then a bunch of dudes I was less familiar with. I guess I better break out my Final Fantasy Wiki to get hip to who all these people are. And of course, Cloud and Squall will be winnable in the game’s first online season. 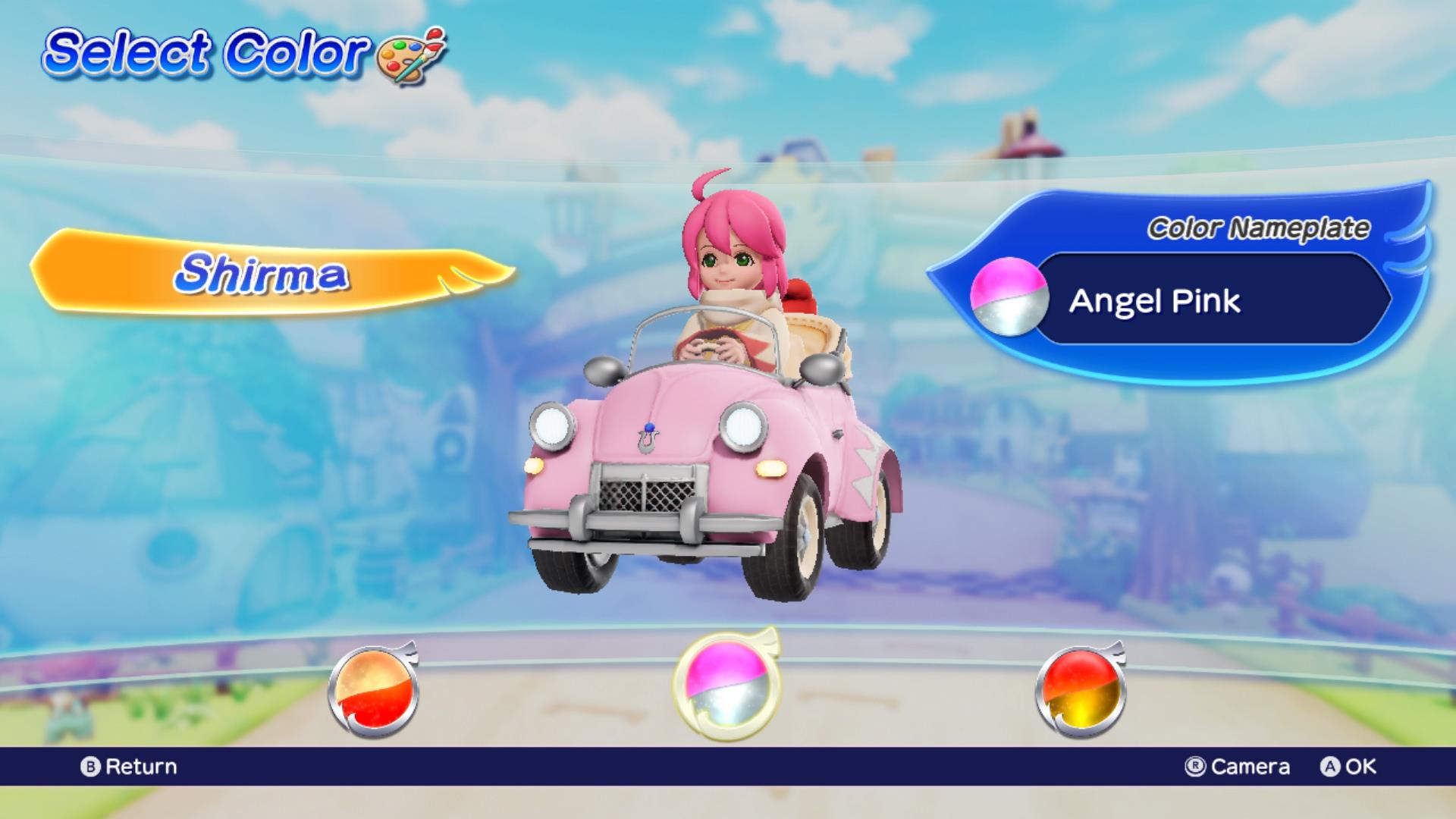 Chocobo GP is following the typical “Season Pass” model, which will allow players to purchase a pass to win new characters, currency, and cosmetics by playing the game’s online modes. In particular, the Chocobo GP mode, which is a 64-player bracket-style tournament mode, feels like it will be a major part of the Chocobo GP experience, but I have been unable to try the mode out due to the release schedule of the game (full release is expected on March 10). I do know that every player will be gifted with enough “mythril” to purchase the first season, so I will be there trying it out with the rest of the player base. If it significantly changes any portion of this review, Gaming Nexus will update the review accordingly. 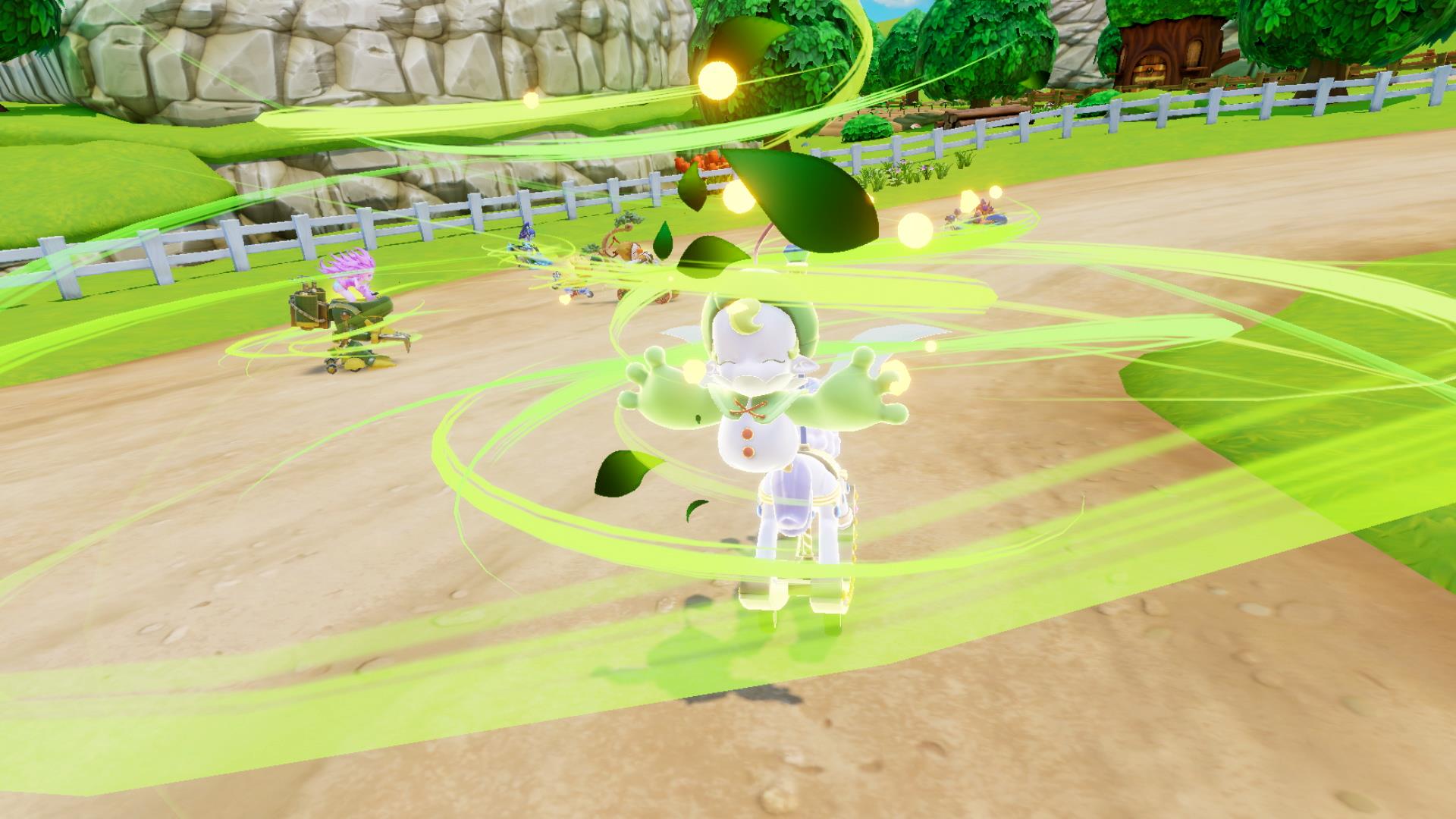 But even without the online season functionality, I feel like I have had enough time with the game to get a really good feel for what to expect. If you took one look at Chocobo GP and thought “Oh, that’s Final Fantasy Mario Kart”, then you were 100% correct. This is a game that looks, feels, controls and behaves like Mario Kart – and there is absolutely nothing wrong with that.

Did Chocobo GP make me mad in the ways that I described at the beginning of this review? Of course it did, but that just means that it is well-made kart racer, and it is conforming with the conventions of the genre. Chocobo GP is releasing with a free “Lite” version, so players can jump in and try out Chocobo GP without making a huge investment. I would approach this game via that route – you can still participate in the online seasons, and you’ll be able to get a solid look at the game to see if you want to take the full plunge with the full release. Just be ready to set your ego aside. Games of this nature aren’t about winning, they are all about surprising fun. And Chocobo GP fits that bill quite nicely.

Chocobo GP is a very well-made kart racer that looks and controls very much like Mario Kart. With a funny, weird storyline and a ton of different characters, tracks, and modes, this will keep fans of the genre busy for quite a while. I would recommend checking out the free “Lite” version of the game, and if you like it, take the plunge.