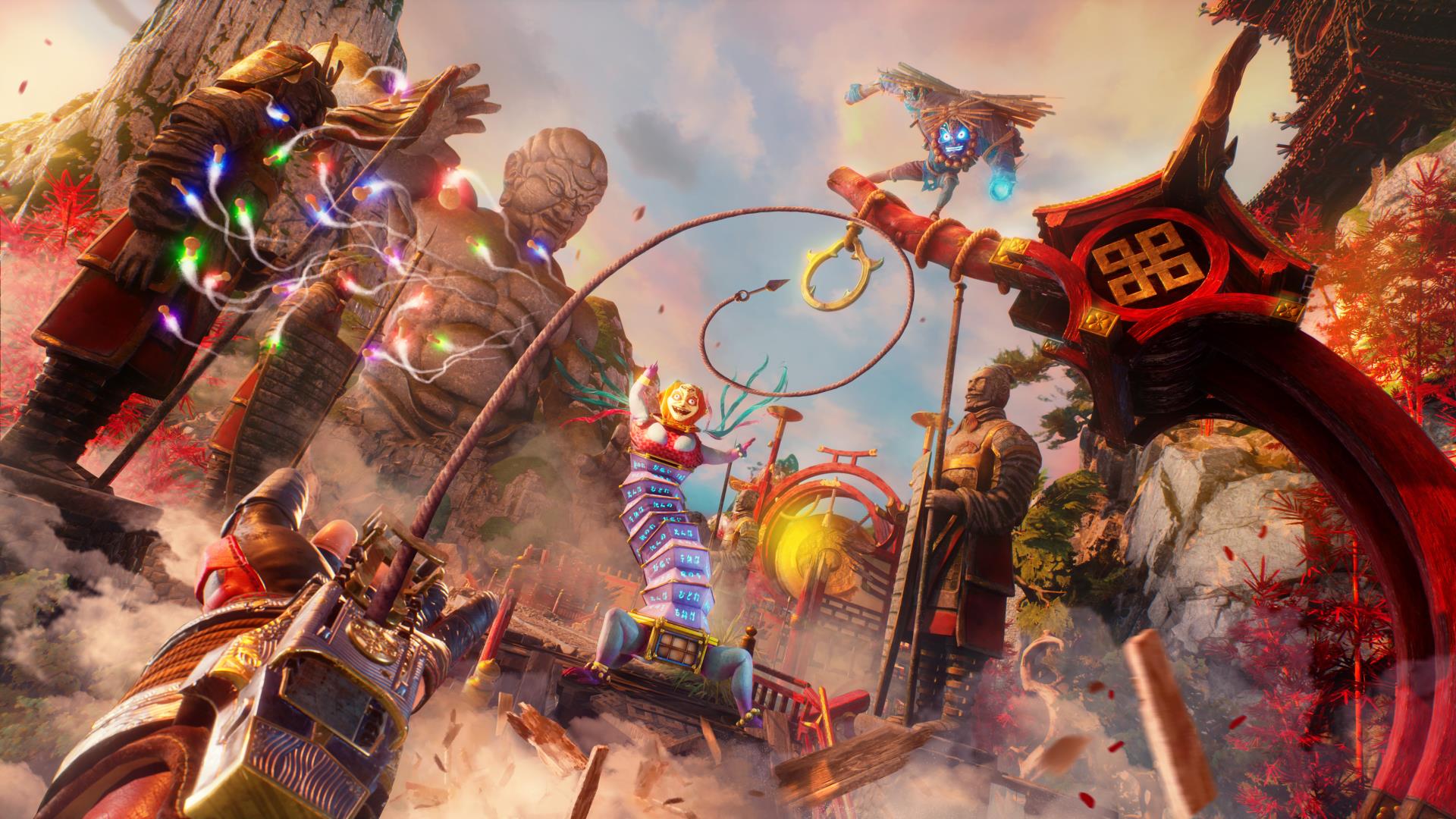 When I first saw the trailer for Shadow Warrior 3 by Devolver Digital and Flying Wild Hog, I was entranced, so I immediately asked if I needed to play the first two. I was told no, and that I should give it a shot. I did, and let me tell you, Shadow Warrior 3 is absolutely bonkers. The main character, the side characters, the enemies, and pretty much every THING in this game is...well, there are a lot of adjectives I can give here. Hilarious is the first one that comes to mind, and insane is nowhere near the last. And the first few levels I played had me screaming like a school kid. TL;DR I LOVED Shadow Warrior 3. Absolutely loved it!

Ok, now that that's out the way, lets get into it. Lo Wang (I just got that) explains what is happening to the player using "educational props". He explains in the first cut scene that he saved the universe from collapsing. He killed someone in the previous game (spoilers?) and is now no longer affiliated with a person named Zilla (no idea who that is). As a reward for saving the universe, Lo Wang (now it's just funny) wants more spoils for his victory, but instead, The Shadow Realm opens up and a 10,000 year old dragon appears. As the story continues, it appears that Lo is talking to a mask named "Hoji" in his underwear. He has clearly lost it. And he's tells the rest of the story through a tutorial. 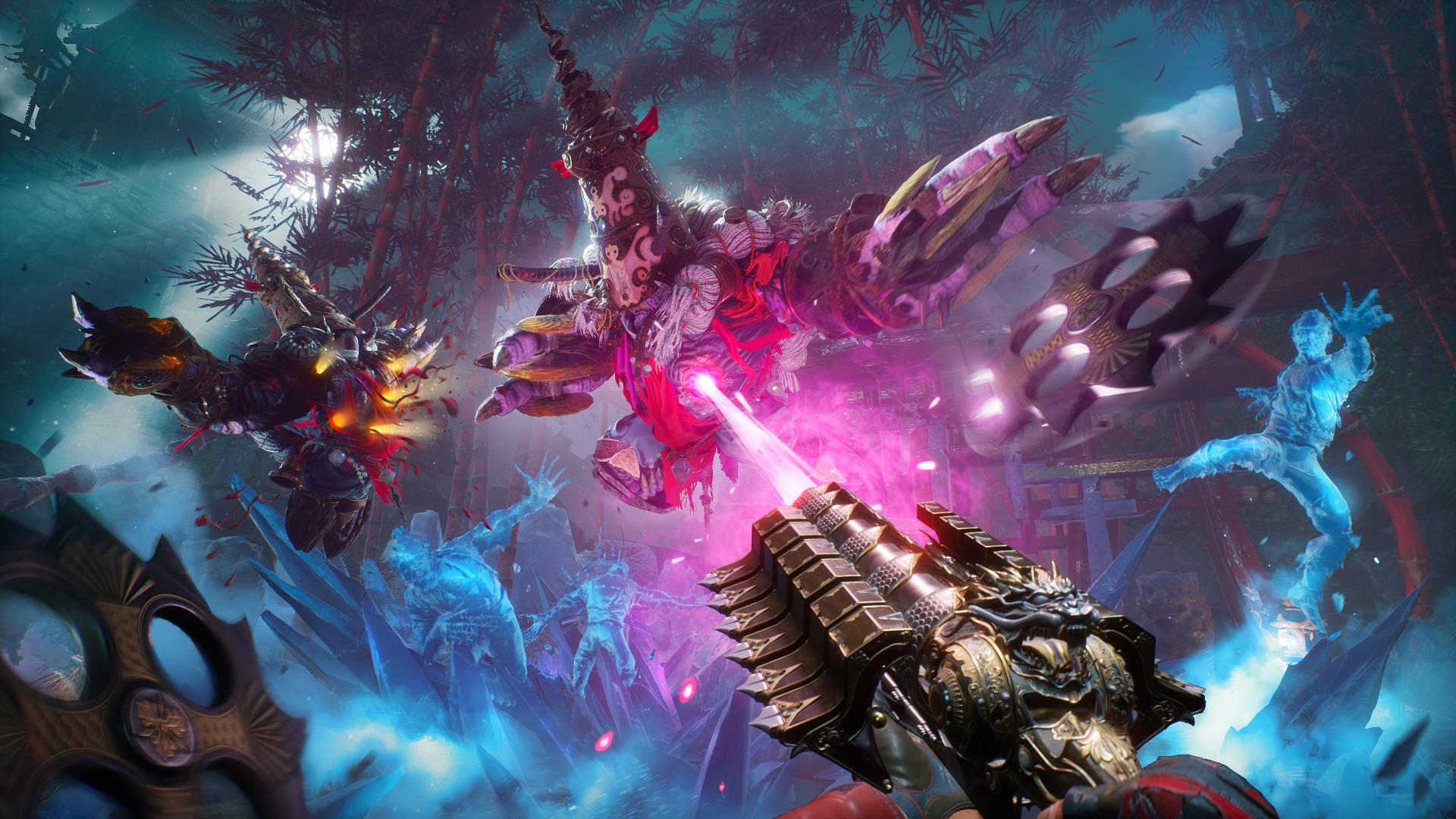 This tutorial immediately makes me say "oh my god", as I careen down the back of this dragon in first person view. This section teaches you how to use the katana. Five seconds later, Shadow Warrior 3 teaches you how to use the gun, and five seconds after that, you learn how to jump. But you forget you have a katana, and just blast your incoming tutorial foes with all your bullets. It then teaches you to dash, and climb up mountains. And you are now making jumps and dashes in combinations you would never believe. You're jumping in on the scene and blasting enemies. You'll also run into explosive barrels. They can be shot and explode into fire, ice, and electricity. Use these. I implore you. They help immensely. Now, the developers want you to be good at the game (Aidan Hauter TM). Every thing you need for success is provided. You progress further, and you get a shotgun. Then you stab the dragon in the eye. Yeah. That happens. You still with me? Cool!

Cut back to Lo Wang, explaining how the dragon went onto destroy everything, and he couldn't slay the dragon after all, and he's at his wits end. "Why fight, when there's no one else to fight for?". Then the game kicks you back into the tutorial. where it teaches you how the wall run. You're a ninja, after all. Then you receive the absolute best tip of the entire game. If you kill enemies with the Katana, they drop ammo. If you kill enemies with ammo, they give you health. There are also regenerating resources planted within each section. Health and ammo respawn after a certain amount of time. You're then taught about the "Finisher" meter. You pick up finisher orbs after killing demons, which in turn builds the finisher meter. Once filled, you'll perform slowed down, extremely gory finishing moves on the enemy of your choosing with one click of the bumpers. Some finishers allow you to steal the enemies powers, and use them on other enemies. For instance, you can rip the core out of an enemy, throw it back out into the field, and it will shoot multiple lasers to stun or kill enemies, until its power runs out. Some of the bigger enemies will take 2 levels of finishing meter. So far so good? 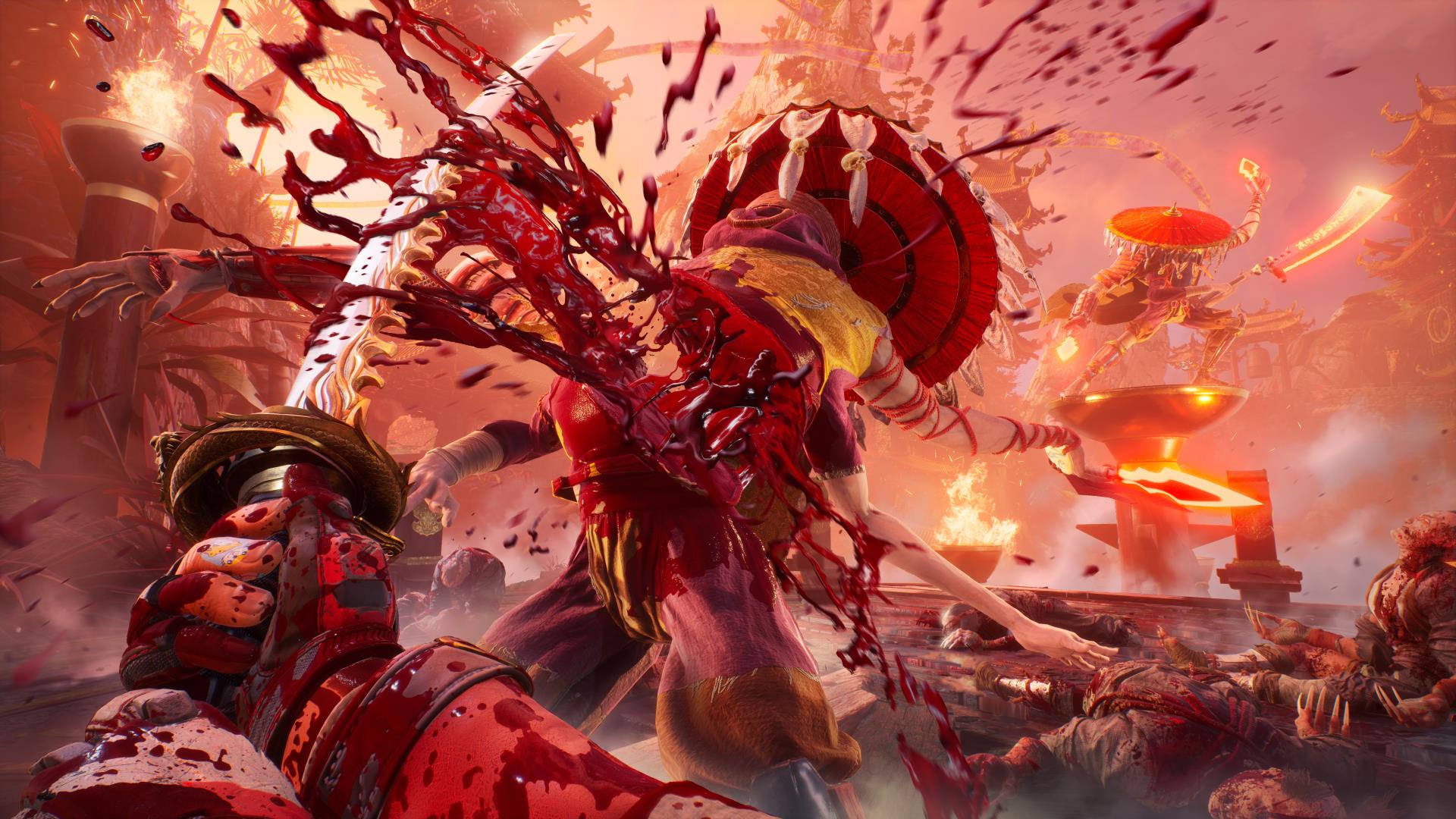 You learn how to do a lot of things in a very short time. With every thing whirling and swirling, popping and gliding, you would think the controls would be a clunky mess. Not true. Right trigger to shoot. Left trigger to jump. Hold the left bumper and use a control stick to switch guns, or click it to switch them on the fly. The right bumper swings the sword. If a gun runs out of ammo, it automatically switches to the next gun. You get another cool accessory later, the grappling hook, and it too is very simple to use. The controls are butter, compared to other chaotic games I've played. The game clearly wants the player to succeed - it is all laid out in a way that allows you to fluidly move from one action to the next. Even if you think it looks intimidating, you'll be busting heads in no time at all. Shadow Warrior 3, however, knows this, and will throw ALL OF ITSELF at you! More monsters, more ways to die, and the longer the game goes, the more difficult your "walk in the park" becomes.

The story fleshes out further, and as it does, Shadow Warrior 3 starts to test your mettle. You'll spend a lot of time in between missions fighting many variations of "demons". They steadily evolve with the game. You start off fighting low level one-blast-kill demons. The buck stops there. There's a monster that looks like a jack in the box that shoots metal blades your direction. There's a demon who has three levels of shield before you can strike it with anything. There's a demon that will not let you get any attacks in until it attacks you. These enemies get harder and more difficult to kill as the game progresses. 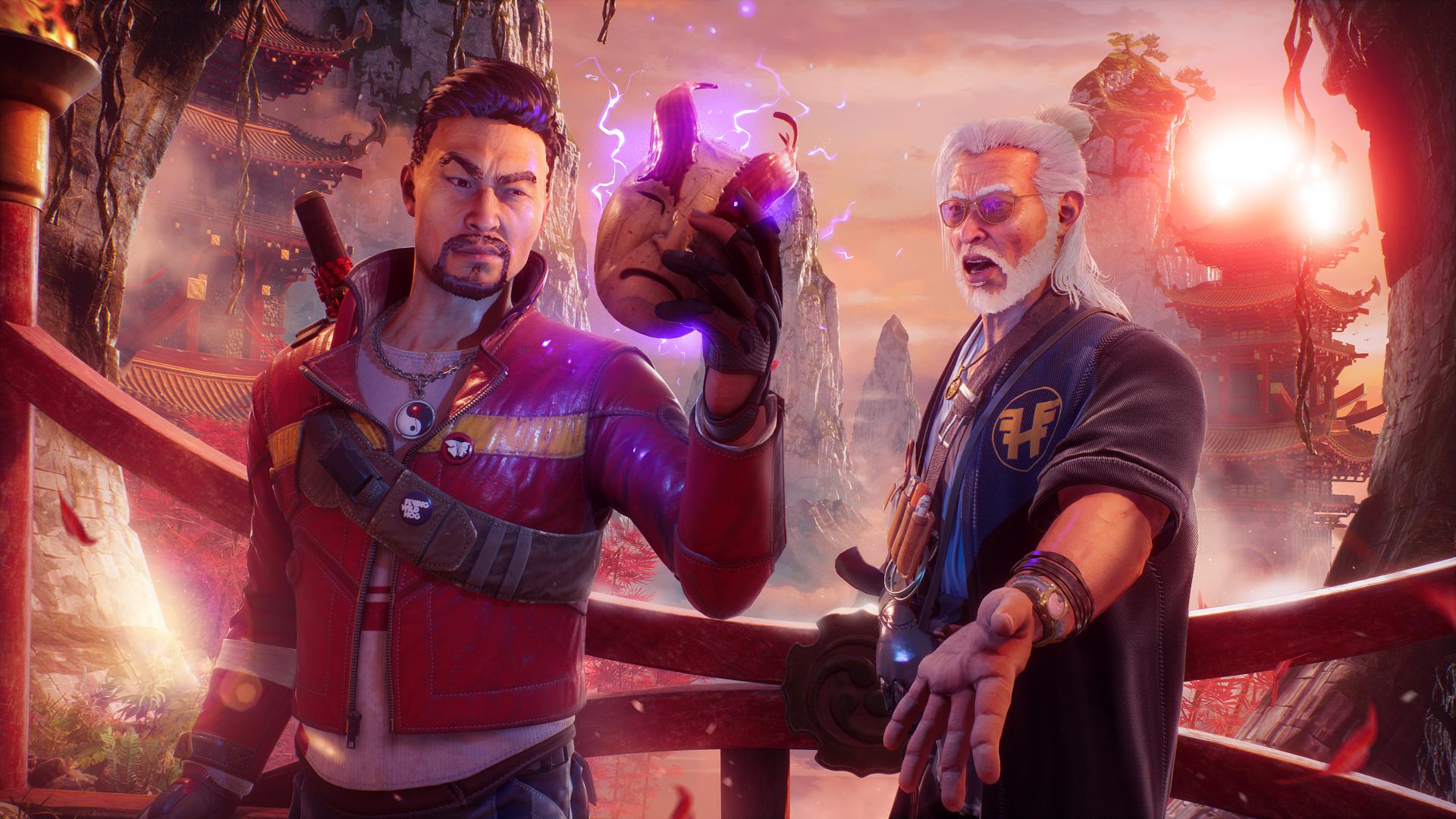 You have to find the best combination of weapons, sword, finishers, and environments to move forward. There are scenes where all the enemies attack at once. Just kidding. That's EVERY ENCOUNTER! And they don't let up. Your job is to find the best weapon for the stronger enemies. The shotgun may not work as well as the grenade launcher, BUT, vice versa. The grenade launcher is slow, and does no good to demons dancing around on an airborne disc. And all this insanity is in between getting more of the story - which continues becoming more and more bizarre. There is a story arc where you have to save Zilla who got sucked into the mask, and that mask gets stolen by a raccoon. There's a mission where you're listening to Hoji from that very same mask, insult you, while protecting an egg careening down a river on a raft. There's a boss fight, no kidding, where you fight a giant cock. And yes, I said it. A giant rooster. And this thing has a very terrible surprise for you.

All that being said, you can level up your character, sword, and guns, to lighten the load a little. Around levels, you will find and collect special silver or purple orbs you can use in exchange for these upgrades. Lo Wang himself can level up in 4 different categories: Chi blasts, health, resources, and explosives (the barrels). The upgrades are unlocked in progression, meaning you have to unlock the first one, to get to the second. You can get more max health all the way up to health regeneration. You can make his chi push stronger. You can make the health, finisher orbs, or ammo spawn faster. You can even upgrade the barrels to explode with a wider range. The guns can also be upgraded. The guns can get more max ammo, or different buffs to help you out within the game. The grenade launcher delivers a higher blast radius. The twin guns can add lightning to the bullets, producing a shock mechanism to the enemies. You can also get orbs by meeting certain challenges throughout the game. Kill 100 enemies with a sword, the HUD will tell you to come claim your orb. Kill 15 enemies with one katana strike, go and claim your orb. You're better off getting orbs this way if exploring is not your jam. All of this is readily available. No complicated skill tree or alchemy item making system. Pause, pick something, hold button to upgrade, resume.

You might be wondering about the visuals. Shadow Warrior 3 looks fantastic! The worlds are absolutely gorgeous.  As I was running through enjoying the lush levels, I was blown away how seamlessly the game moves from action, to cut scene, and back to action. How the character just goes along with everything that's happening, no matter how ridiculous.  With these visuals, you'll discover the game is pretty linear, and where you can move is clearly laid out. Green grass lines where you can wall jump. Bright green hoops signal when you can use the grappling hook It knows where it wants you to go, but if you fall and die, you just start back from the last checkpoint. This also happens if you're in a fight with a lot of demons, except you start from that section. 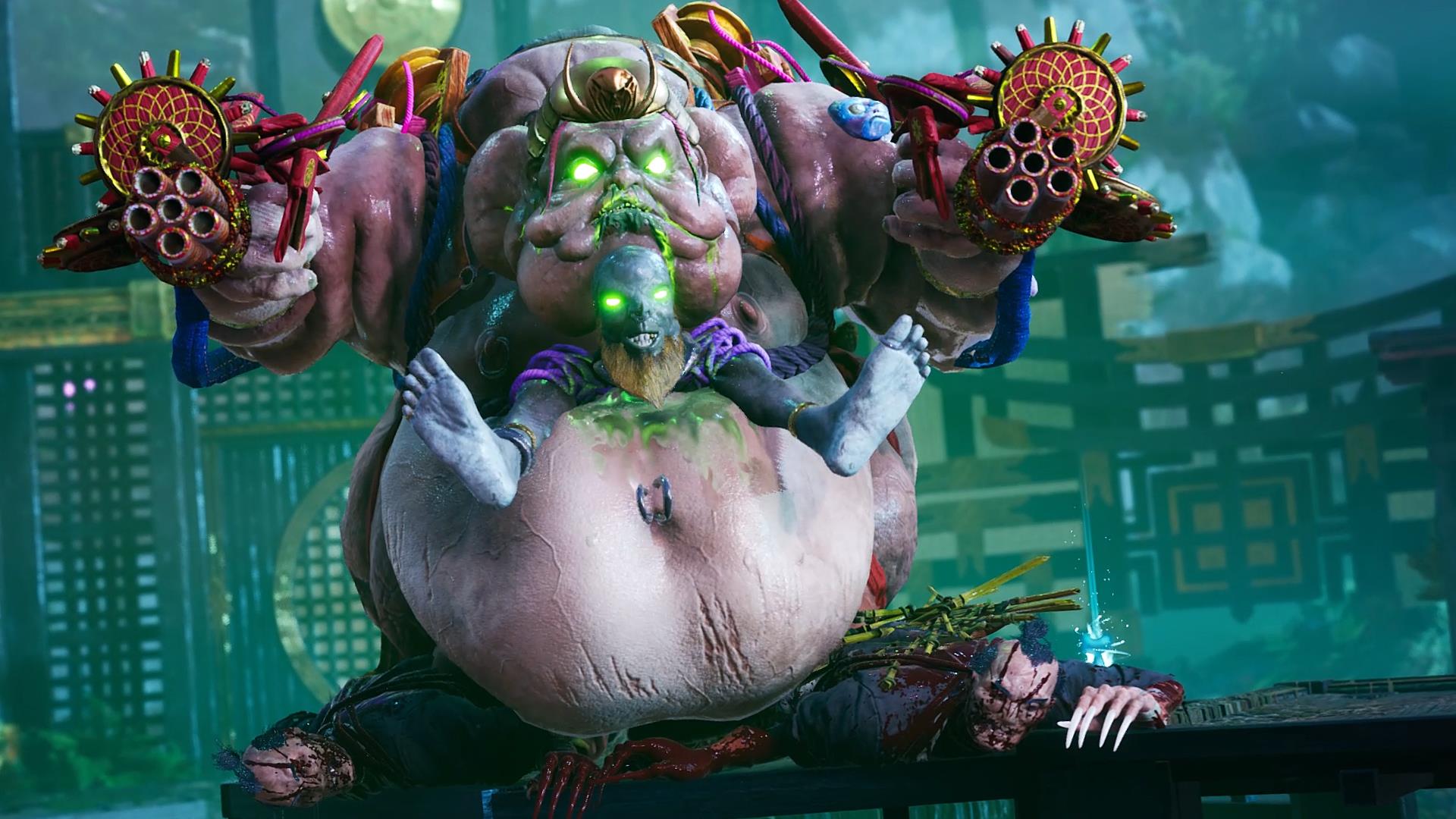 The audio is also fantastic. You'll hear every quip from Lo Wang and Hoji, and every sound effect and sword clang, even if a suicide demon is screaming towards you at breakneck speed. This is clearly a character that has seen a lot, and he's totally unfazed by anything life throws at him. The game is also very aware of itself, and Lo Wang pokes a lot of fun at the storyline. "Magical objects never do what's on the label". His quips are comparable to a certain comic book character I love dearly (his name has been redacted to not draw the ire of comic book fans, but is rhymes with "Mider-Span"). Every enemy sound, every bullet, is perfectly expressed. Even when you trigger an environmental trap to kill the biggest demons, you hear it all, and it's all balanced.

There is a lore tab in the upgrade menu that shows descriptions of every gun, demon and storyline point, and there are easier and harder difficulties. I played this on medium, and lost a lot. I can only imagine the challenge on hard. The game takes about nine or ten hours to finish, which has me looking forward to possible DLC. This game is just too crazy not to see more of it. Regardless of whether there will eventually be any more content for Shadow Warrior 3, I'm definitely going back to spend more time with the game.

Shadow Warrior 3 is absolute fun. It's easy to pick up, and something you definitely want to invest some hours into. This is the most fun I've had playing a game in a long time, and you will not be disappointed. There are a few hiccups and glitches I'm sure will be patched out but I digress. The visuals, the combat, and the characters make this game an absolute blast to look at and play. I have nothing bad to say about it, only because Lo Wang is crazy, and would probably make his way to me! Now, go slay that freakin' dragon!