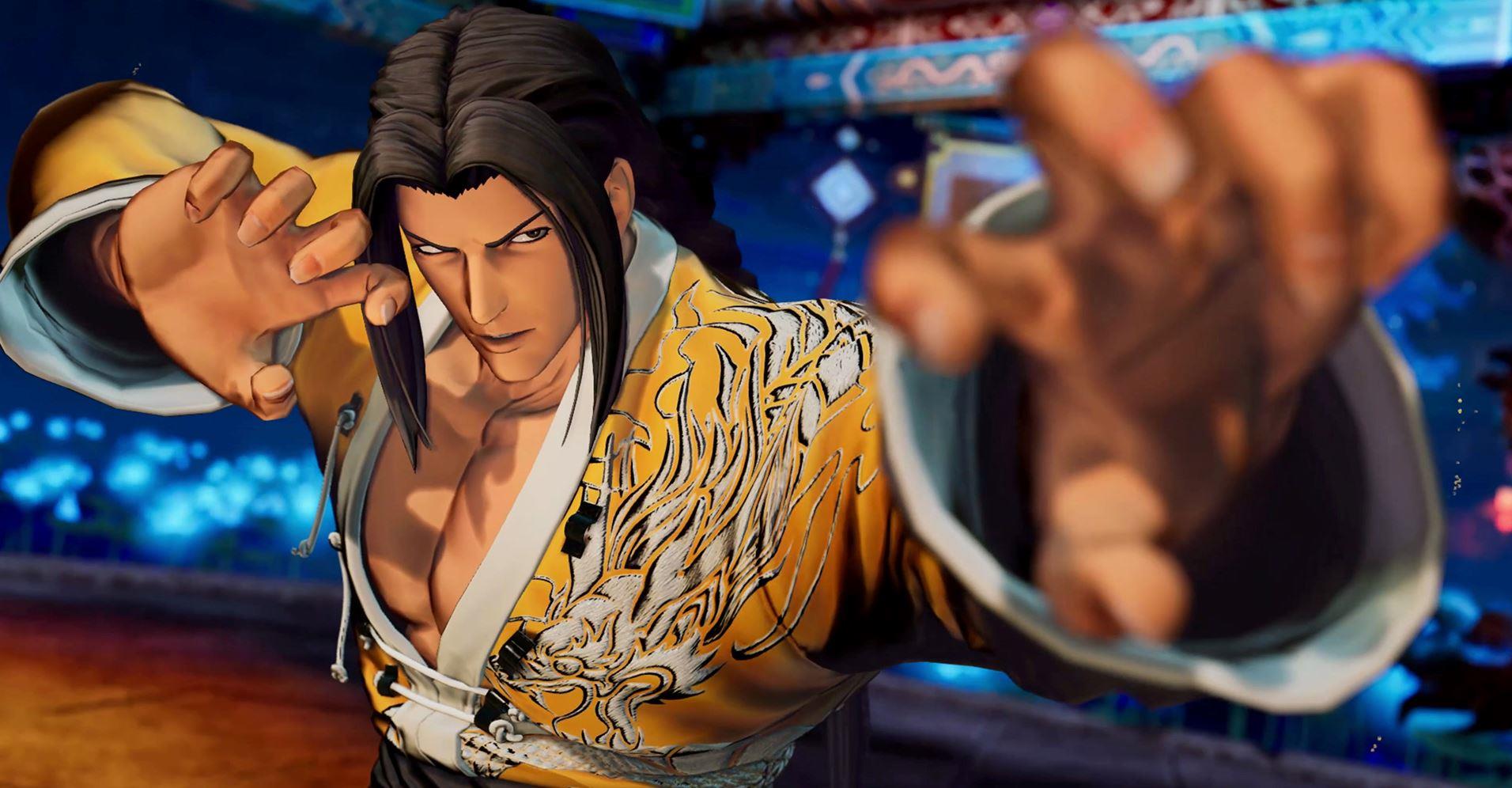 The King of fighters XV

I'm going to start this review by saying the following: I don't remember the last time I played a KOF game. It might have been KOF '98 or possibly '99. This is not for lack of trying, but after the releases of the Capcom VS SNK series starting appearing, I never went back. I had a game with Ken Masters, and Terry Bogard. It didn't matter who my third was. And Capcom VS SNK took a LOT of my money. I say all this to let you know what you will not see here. There will be no comparisons to previous games. There will be no characters I wish were in the game. (Vice?) There will be no talk about game engine and professional gaming jargon like "hit box" or "frames". I requested to play this game because it looked amazing. It looked accessible. It looked like I could get that old thang back. And believe me when I say it, I did.

The King of Fighters XV's tagline is "Shatter all expectations". SNK comes out swinging. There are THIRTY NINE characters in the base game split into 13 teams. Old favorites like Fatal Fury mainstay Terry Bogard, and KOF veteran Kyo Kusanagi are here, along with later additions like K', and brand new addition Dolores. I went with familiarity when my choosing of the characters for my first online play. All of these were in the very first version of the series. Why learn new characters, when you can win with the old? SNK has already confirmed 12 more characters, releasing all the way up to Fall 2022. Rock Howard from Garou: Mark of the Wolves will show up, and his in-game estranged father and Fatal Fury antagonist Geese Howard (on two separate teams of course). 51 characters by the end of the year is pretty nice for a fighting game.

The gameplay is fully accessible. I say this with caution - I don't want people thinking they will just pick up the game, jump online, and start taking people down. There are various tutorials that will help you learn the basics. Four buttons will get you two strengths of punches and kicks. The game does not want you to go into battle having learned nothing. It's chock full for the experienced fighter, or the novice who hasn't played a KOF in years. Dashing, high jumping, easy combos and even super moves, and those can all be done with a few quick pushes of a light punch. The issue with that is, there's also a combo trainer, or "missions" mode. If you want to get flashy, and take 75% of someone's health, this is the session for you. Something I hadn't seen before is online training. Instead of beating the stuffing out of the AI over and over again, you can get a partner to join you online, and try out different things, in different scenarios. Again, if you're going to be the king, these modes are for you. King of Fighters XV lets you go as deep as you want. However, if you're looking to beat up the people in your neighborhood, the casual training model works just fine. 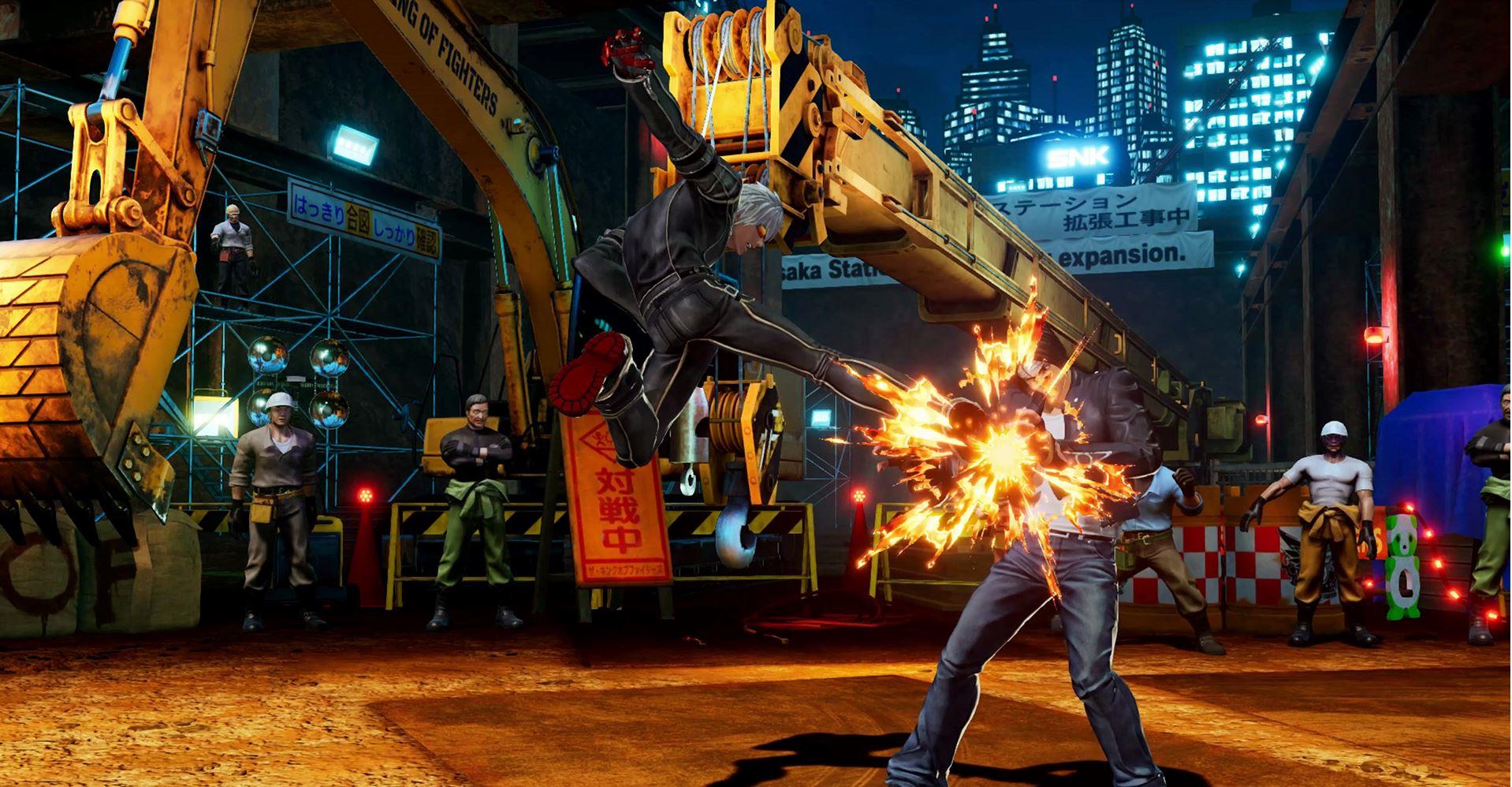 Online play has been flawless so far for me. I've played quite a few matches with no lag, and that is all thanks to the wonderful Rollback netcode. To put it in the easiest way possible, Rollback netcode allows online play to feel like it's local. As if your opponent is right there in the room. It basically nullifies the delay, and you can see it working. Sometimes, I think I land a punch, and it does register, but it was actually blocked on their end. It's kind of weird to explain it in a way that matches the simplicity of this article, but let's just say it works. Online play lets you do ranked matches, where you climb your way up the leaderboards. And you can tweak this to find someone above your rank to shoot up those leaderboards faster. This is recommended for the pros who want to match up with other pros quicker. Casual Mode lets you fight anyone at any time, but doesn't go against your record. Then of course you can create or join a private or public room, and beat each other up from the comfort of your home. These modes also let you change up the region you want to play in, as well as the connection you want to match up with, in case your internet is slower, or you want to dodge that lag. 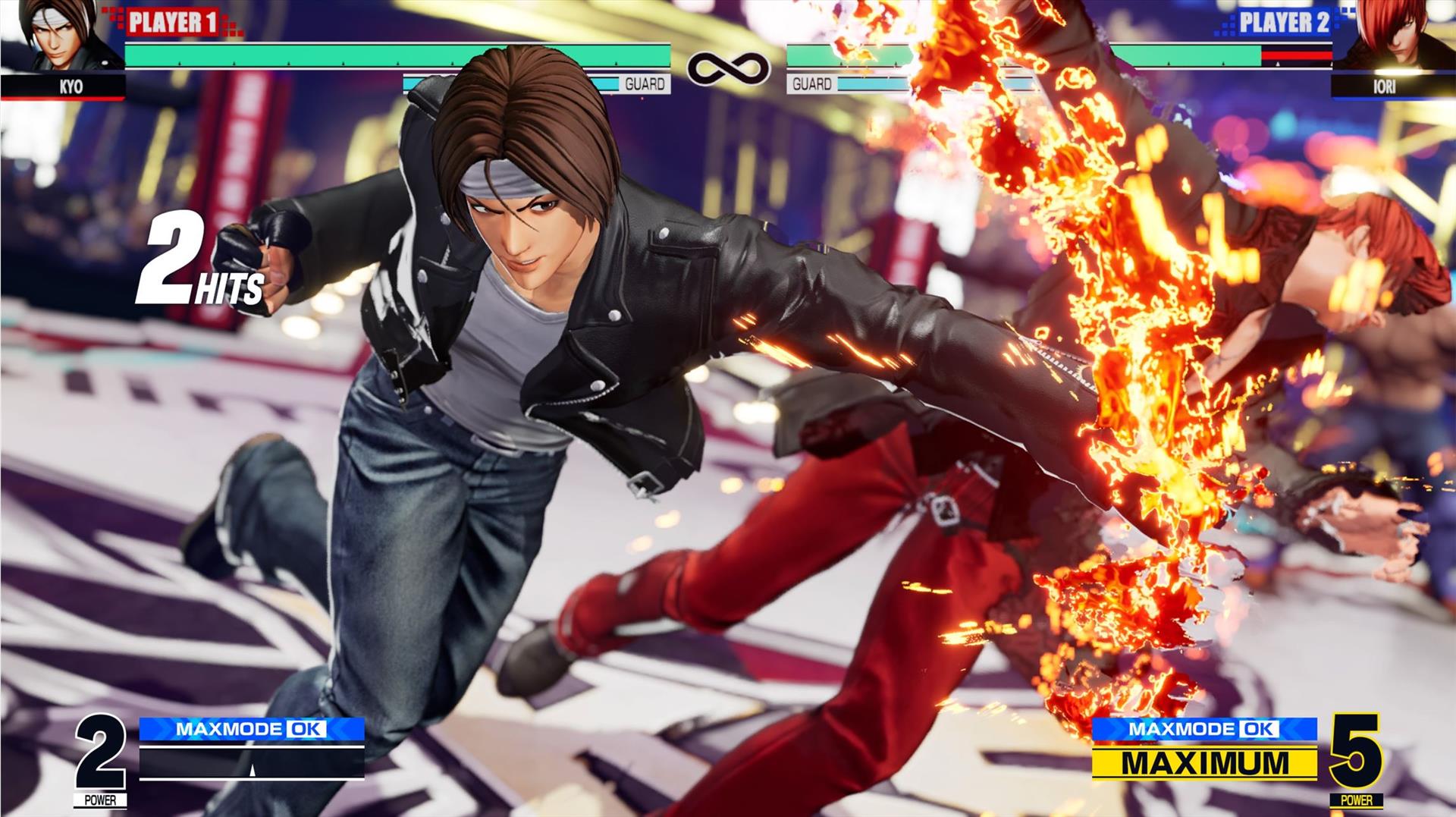 Graphically, this game is beautiful. The colors pop out at you. The backgrounds are fully animated. The characters are larger than life, with facial expressions and details you normally wouldn't care about in a fighting game. The different special effects and the presentation of the super combos are a sight to behold. It may take a while for Athena to hit her Super Max move, but it's totally worth it. Everything is moving. Everything looks gorgeous and polished. King of Fighters XV is an amazing looking game from the intro to the winning screen. Even the cutscenes during story mode are rendered by the in-game engine, with the exception of the opening sizzle, and the endings. Those are done in full anime. Gorgeous. Chef's kiss.

For the story mode, I'm going to let the press release do the talking. I played through it and beat the final boss, but I didn't do it on hard (5), and it looks like that's going to be the challenge. 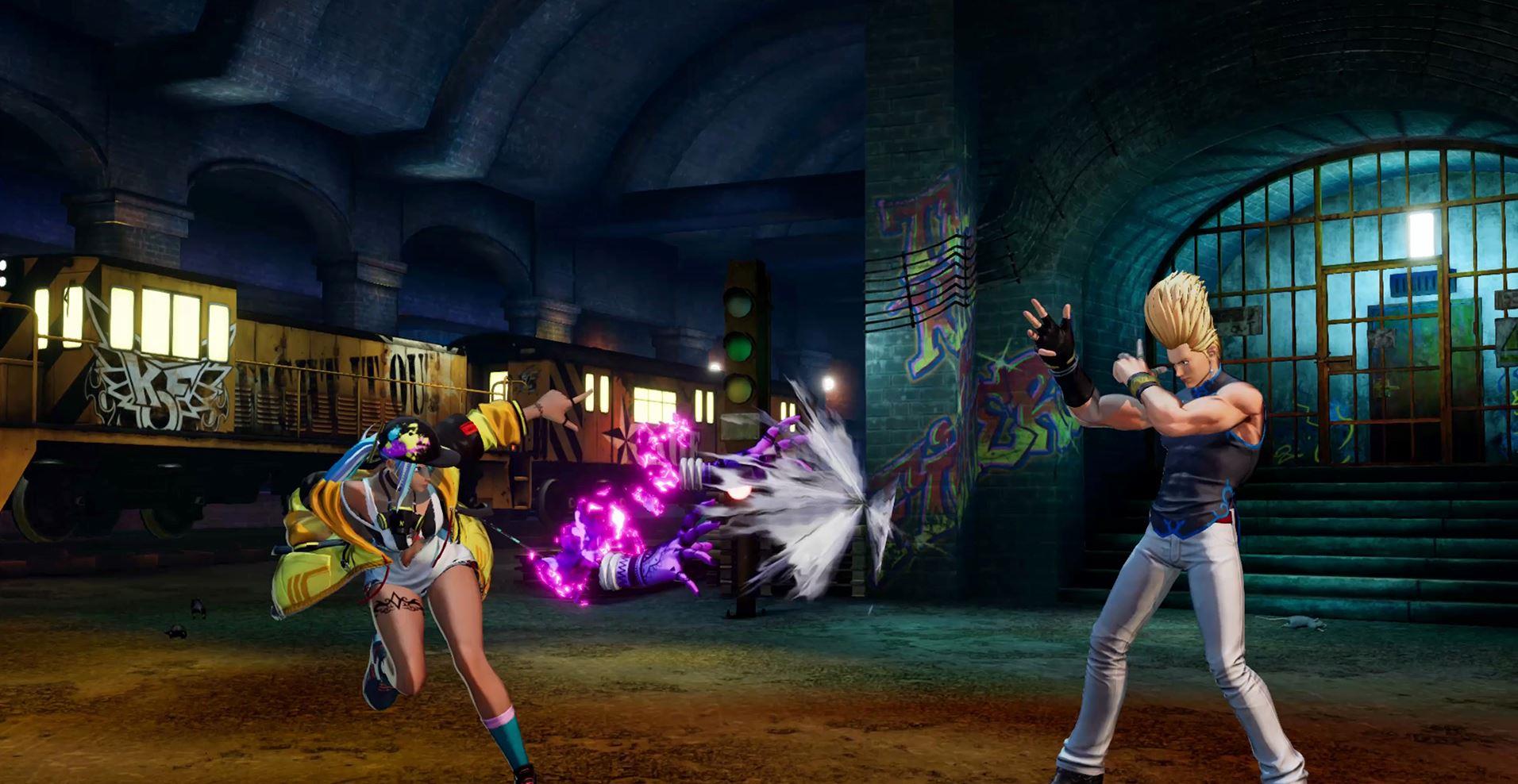 The KOF Saga continues. Heroes from the Orochi, NESTS and Ash Sagas have all joined KOF. This time, the story is coming to an explosive climax! Only the world's toughest fighters can duke it out in the largest martial arts tournament in the world. Though a mysterious being called Verse destroyed the KOF arena, its threat was quelled thanks to the brave efforts of the winning challengers. Time has passed since the closing of that tumultuous tournament, and the next KOF begins, backed by a new sponsor. Meanwhile, Chizuru Kagura senses something interfering with the seal of Orochi, otherwise known as Gaia's Will. She teams up with Kyo Kusanagi and Iori Yagami to join the KOF and investigate. Amidst these myriad motives, fighters resurrected after Verse's defeat also join the fray. Once again, a storm is on the horizon...

So, you know, it's a fighting game story. That's not what you're here for, but its nice that companies continue putting some thought into it.

Last, but certainly not least, I want to mentions that this game is full of unlockable content. There is a ending movie seemingly for every character. There is music from every King of Fighters game in history along with other fan favorites too. There is SO MUCH unlockable content in this game, you're going to play through it over and over again just to knock it all out, and when you're done, the DLC will be sure to hold you over. I assure you, there is a LOT for you to discover.

The King of Fighters XV is a very well done fighter. Graphically astonishing. Easy to pick up, and very hard to master. If you want to go a few rounds with someone, you'll win a few. If you get a veteran of the series on the other end though, it might not end well. All in all, the game prepares you for such an event, and maybe, just maybe, you'll shatter your own expectations. Now if you'll excuse me, I'm headed back online to keep that 76% win rate.

King of Fighters XV delivers an excellent fighting game that will appeal to beginners and pros alike. Instantly accessible, the training tools will allow players to go as deep as they like on learning mechanics. Beautiful and deliriously fun - if every game in the series has been as good as this one, I've been missing out.