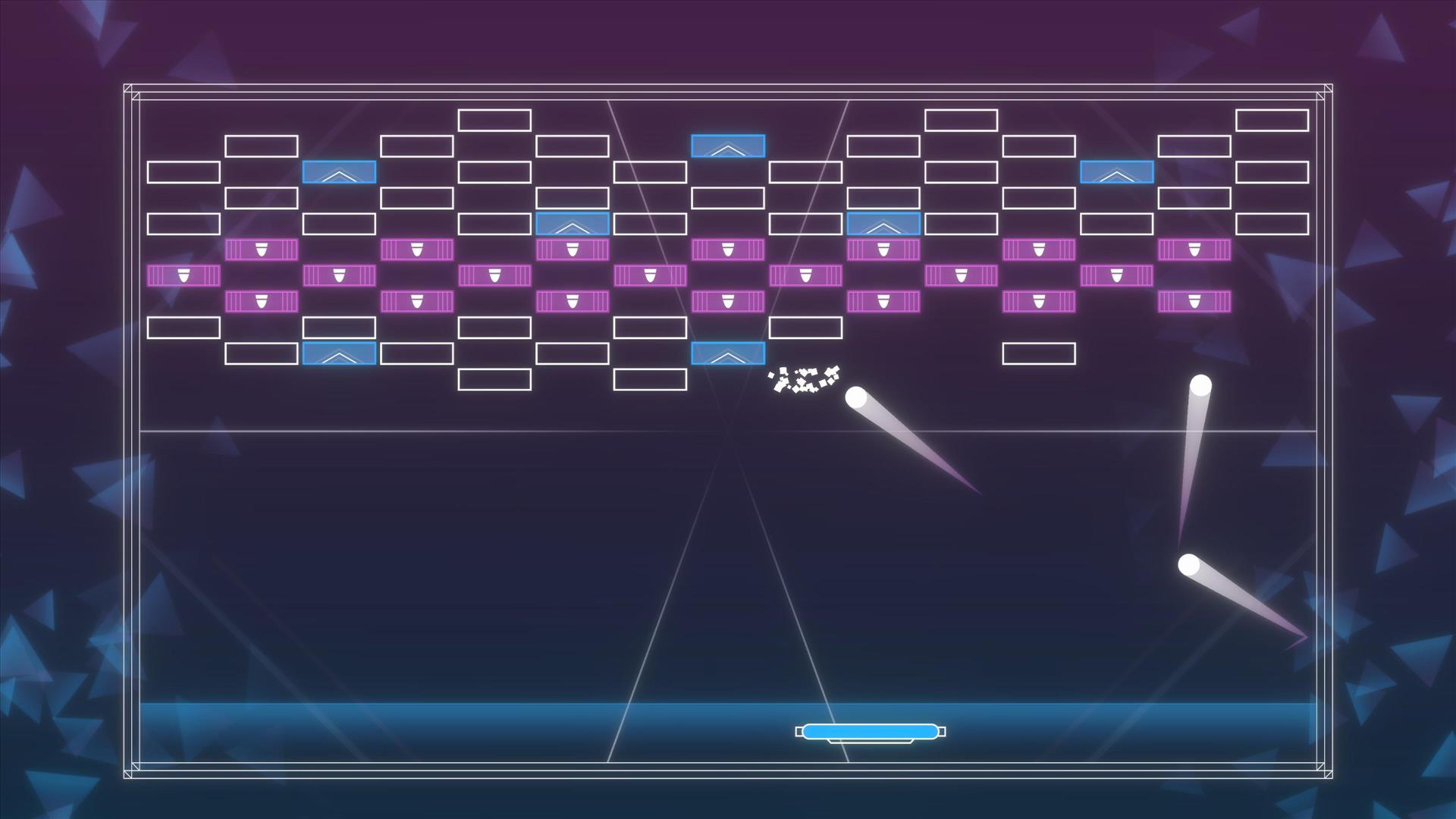 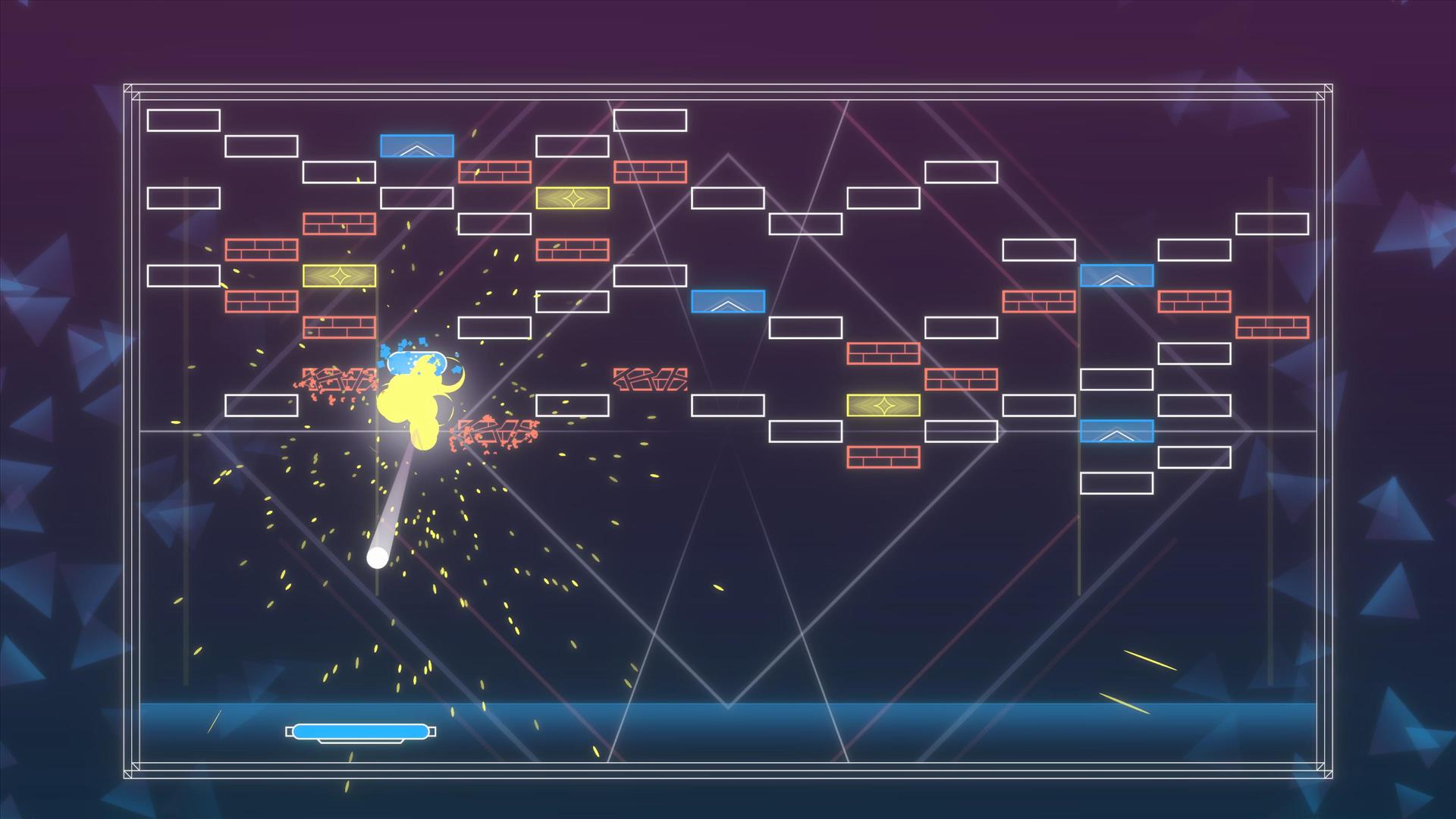 The Atari Recharged series has been ongoing for a good while now. Every few months they retrieve their golden shovel, and dig their way down into the depths of your parents’ video game memories (or yours, and we won’t tell anyone you’re in your 40s). This started back in 2020 with Missile Command, followed up with Centipede, and then Asteroids. This time, they hit us with Breakout Recharged!

Yes, that Breakout. Described in the press release as “The grandfather of breaking brick games”, Breakout: Recharged, like other titles of the same series, throws you right in. When award winning game composer Megan McDuffie’s music starts invading your ear drums, you know you’re in for a nostalgic treat, with a modern twist. Right away, the game gives you options and asks whether or not you have a friend to take on some couch co-op. I didn’t. I break bricks alone ‘round these parts. Single player please! So, the ball comes down, you have to send it back up to eliminate all the bricks, more bricks come down. And don’t miss the ball. Rinse and repeat.

Single player gives you three options: Recharged, Classic, and Classic Recharged. Classic isn’t a throwback to the original Nolan/Bushnell/Wozniak designed second best home video game of 1980, but more along the lines of “Here’s 3 lives, with no powerups. Go get 'em sport!" You can break all the bricks to your heart’s content. There is no end in sight. Classic Recharged is the same format, and you’re still called “Sport”.  The third and most challenging mode to my gaming prowess, is Recharged, which is one life and you’re out. I am currently in first place on the leaderboards at the time of writing this article. But not after plenty of times missing the ball by a pixel, watching it slowly go past my poor little panel and getting the game over screen.

As you’re getting into the groove of the game, you notice there are all types of bricks for you to knock out the sky. There are the regular run-of-the mill bricks. There are explosive bricks that destroy the surrounding area. There are bricks that shoot at you once they are hit, and even bricks that shoot at you for no particular reason other than they have bad attitudes, and want to see you get a game over. And my favorite, the power ups! When a power up brick is hit, a power up slowly makes its way down to you, hopefully while your ball is on it’s way up. It’s easier to catch them that way.

Power Ups are here in abundance. There is the classic multi-ball, which splits the ball into three. But then, there’s the explosive ball, which destroys bricks in proximity to the ball. There’s also missile launchers, the spread gun, and the rail gun, which charges a laser and takes out two whole panels of blocks if you position it correctly. You get a small border around the screen to indicate when some of these powerups are running out, and some of them are stackable. I’ve had a multi ball with the homing missiles, and cleared the screen within seconds. Power ups are a game changer for Breakout: Recharged. But that’s not all. 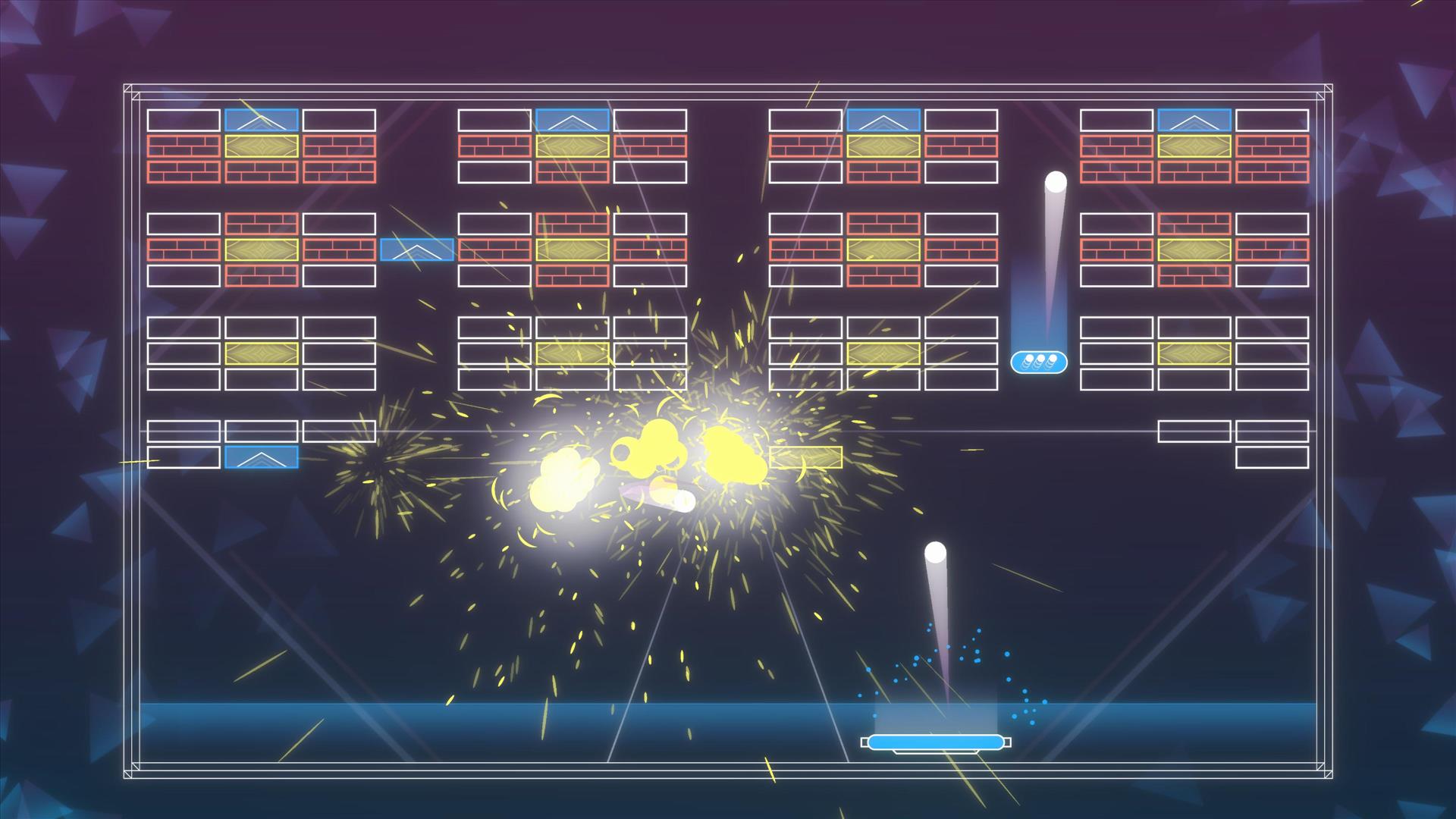 Next up, we have the challenges, which start you off pretty easy. Reach a score of 1500. Simple enough, except you want to do it in a fast time, so you can get that sweet 1st place among your friends, or globally on the leaderboard. (The leaderboard spans across both Arcade and Challenges mode). The second challenge is to destroy all blocks, and there are a LOT of blocks. The power up in this challenge turns more blocks into explosive blocks. There’s a challenge called sneak attack, in which there are shooter blocks everywhere, and they will test your mettle, because these blocks shoot when they please. One hit and you, start the challenge over. Miss the ball, you start the challenge over. They will hold you over, as there are fifty of them, increasing in difficulty. You do get an extensive amount of time for individual power ups though. The first ten challenges are kind of like a power up tutorial.

Graphically, the neon aesthetic pops off the screen. Docked or portable, the game runs with no slowdown or screen tearing. There is a little hiccup with the screen shaking that I’m sure will be patched out. In the options, you can turn off any effects, or screen shaking. There’s accessibility options too in the form of color blind mode. You can also invert the horizontal movement of the panel. I don’t know what would possess you to do that, but it’s there. You can change the volume of sound effects and music individually, or turn the master volume down. There are also 12 different languages you can put the game in. And the Nintendo Switch version even has achievements. How about that?

Breakout: Recharged is a fun trip into nostalgia. It reminds you that the games from the 80’s are challenging and unforgiving, but it’s where competing against your friends and getting a high score began. How far you can get in this game depends on your patience and perseverance. With the 50 challenges and the single player and local co-op available, you will be playing the game for a good while. The replay value, however, comes in the form of adults asking their children to play it, and seeing what happens. Results may vary, but this game will take you back, and I think that’s the goal.