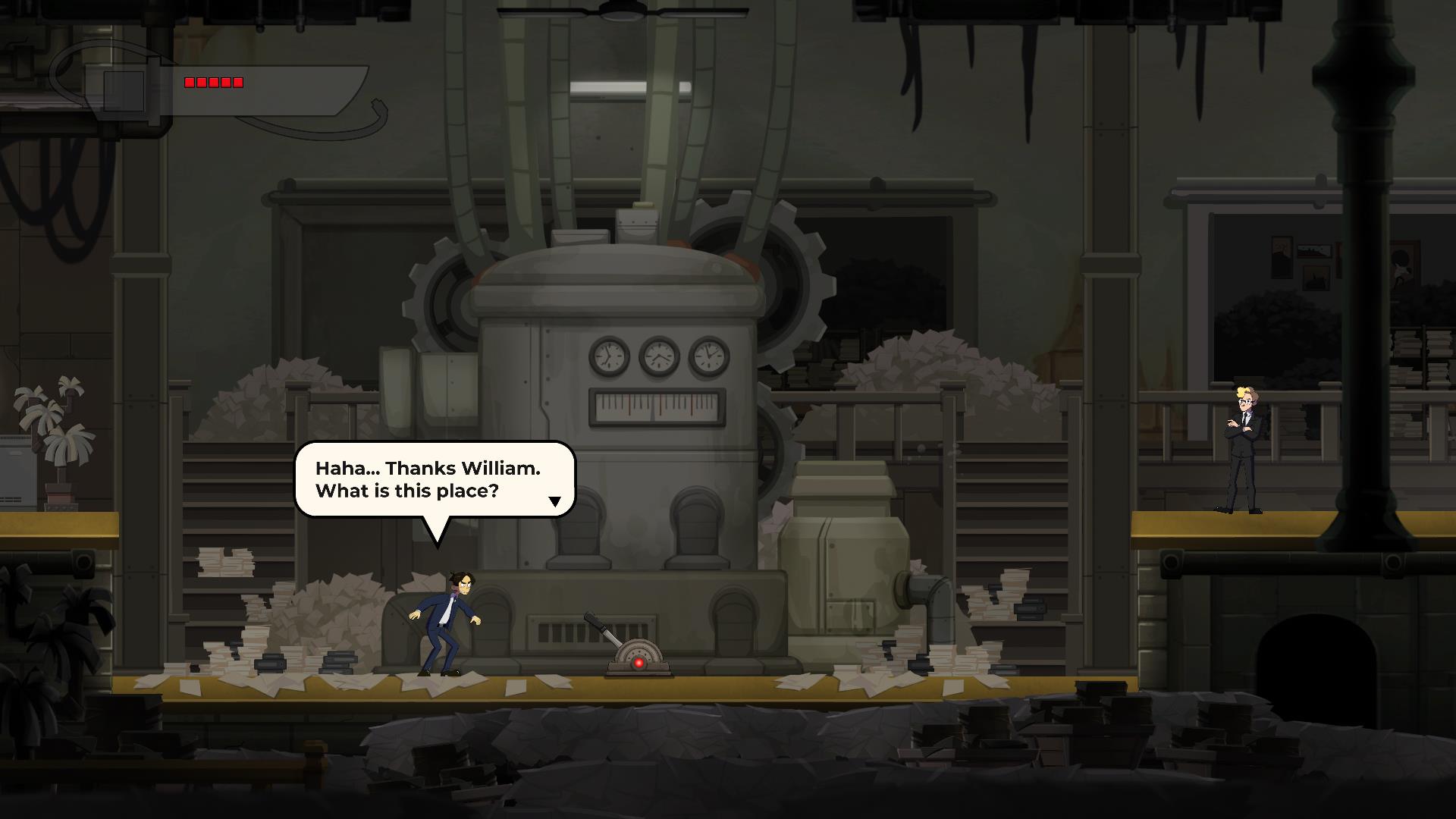 Written by Elliot Hilderbrand on 1/25/2022 for SWI
More On: The Company Man

I’ve never had an office job. But I’ve watched enough workplace comedies to learn the ins and out. I’m assuming work life would be exactly like The Company Man. On Jim’s first day at his new office job he’s tricked into upsetting the CEO who demotes him to work in the customer service department. Once he’s down in what amounts to a literal hell, he decides he’s going to change this company from the bottom up. The best part, Jim doesn’t care how many co-workers, subordinates, or middle managers he has to kill to reach his goal of overthrowing the CEO.

Armed with a keyboard that doubles as a sword and eventually gun, as Jim you work your way from the customer service department all the way to the head-honcho CEO. There are seven main floors to play through, with each floor having a couple of zones and a mini-boss to play against before facing off against that floor’s main boss. Floors are replayable, which can come in handy when you’re trying to upgrade your keyboard or character. 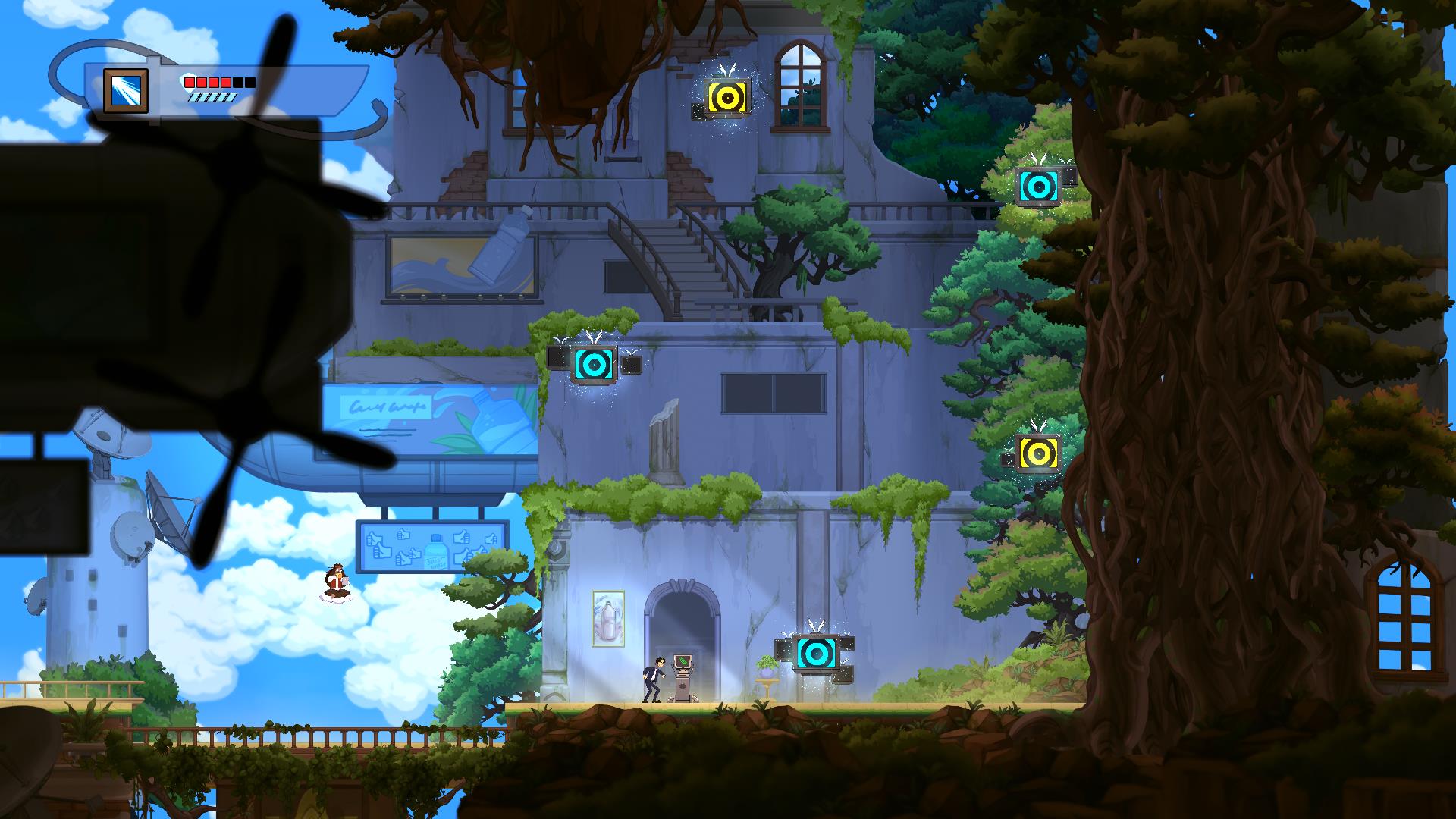 What makes the game stand out from other platformers is the personality of the characters and setting. Taking place in a high rise office you can’t escape, The company Man borrows liberally from a few popular workplace shows and movies. For example, the first mini boss resembles Dwight from the office almost to a tee. I was also able to find homage to movies like Office Space. But luckily they use paying tribute as just one step in the overall feel of the game. The humor is mostly funny, I found myself chuckling out loud a few times. The personality of the game really holds it together, not that the platforming is bad, but The Company Man isn't exactly a trend setter. Levels can feel a bit repetitive, even if the environments change frequently enough. I also enjoyed the game even though there is very little to no story to follow. It reminded me a bit of the old school side scrollers I would play as a kid; I didn’t find myself needing motivation to make Jim tear through the R&D department - I just did it without thinking.

The levels themselves also stand out. Each floor has a different theme that works pretty well for what it is trying to emulate. Customer Service is hell on earth. The workers forced to answer phones all day spit fire at you. The advertising level is a lush jungle, with bean bags everywhere. The seven levels have very different aesthetics but play out in a similar fashion. Work your way to the boss, defeat them, level up your character and weapon, make your way to the next floor. While it doesn’t take long to play through the entire game, I appreciate that I could play through this game in three or four longer sittings and finish it. I also feel for the asking price of the game the quality vs the amount of play time is the right price for entry. I wouldn’t feel cheated or slighted for purchasing this game. 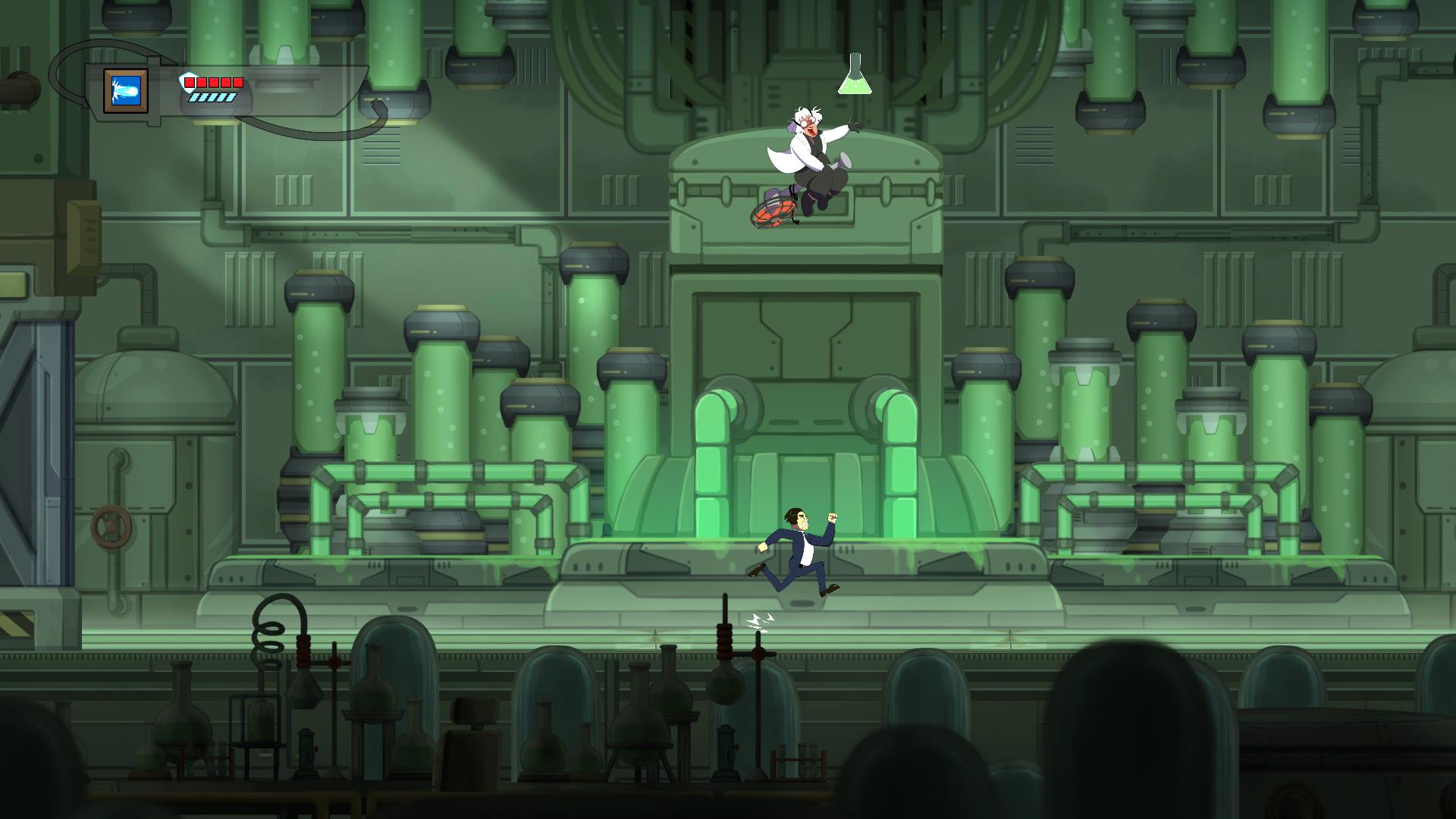 The platforming controls were pretty tight. Jumping, dashing, slashing, shooting all worked as intended. The only issue I had was with some of the enemy NPCs. While boss fights were a highlight of each level, I had some animation frustrations. I would successfully dodge a boss who would reach out to grab me, only for the boss to them warp two feet closer after the grab animation and suddenly I was grabbed. It happened frequently enough that I was bothered by it, but once I noticed it happening a few times I gave myself a little extra distance, and I was fine. 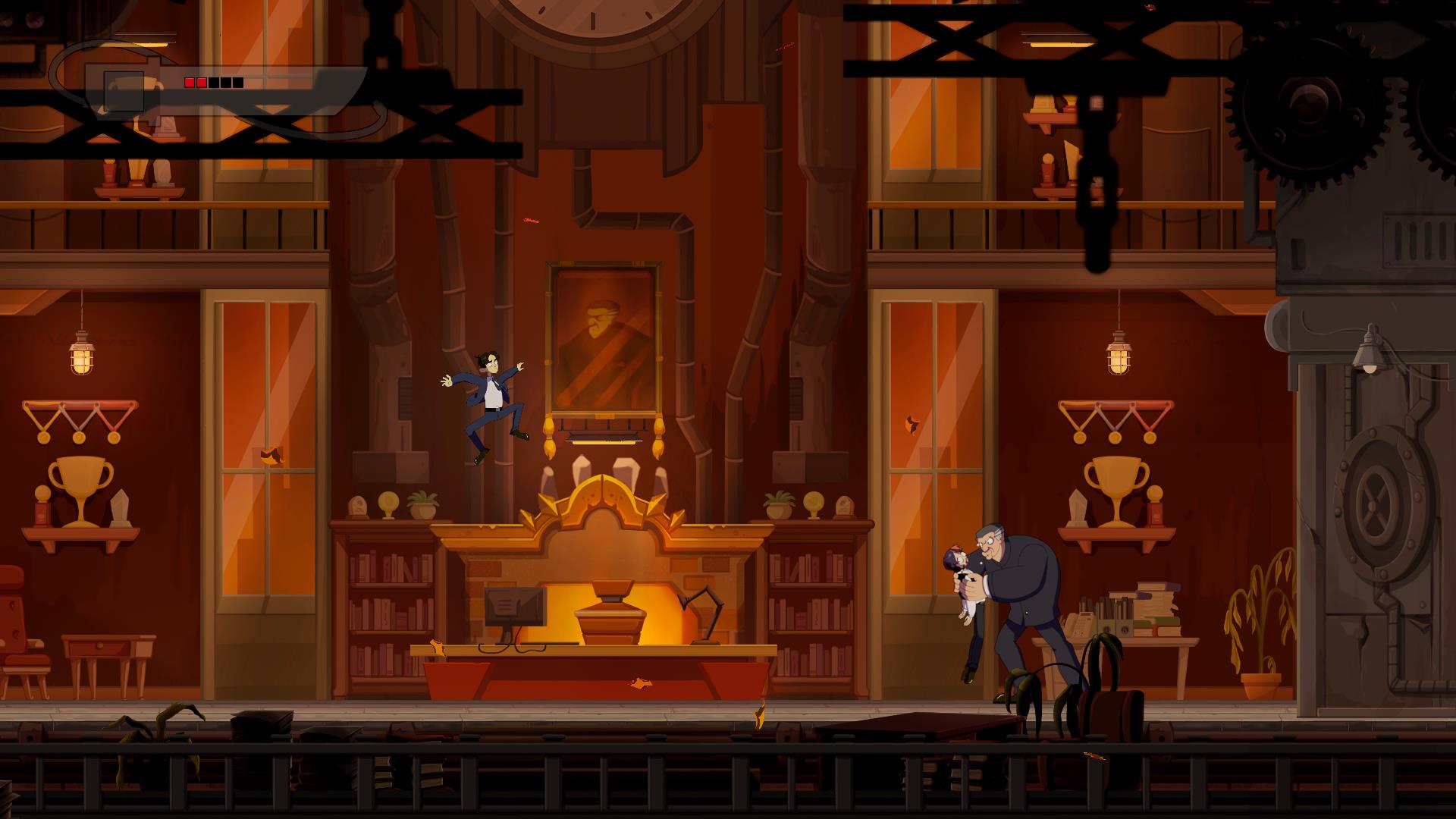 Along with a few unwelcome grabs by bosses, another frustrating part of this game were the elevators. Occasionally you’ll need to get into one to move up to the next level. Or when you start the game up after taking a break, you’re put into the ground level. When you are there you can choose one of three elevators to take you to the floor of your choice. The problem is they only open up for a second or so before shutting again, it’s a bit of cat and mouse. You have to dash to an open door and then hit the up button to get into the elevator. But it is beyond annoying to actually get in, almost like I’m being mocked by the developers for not being fast enough. 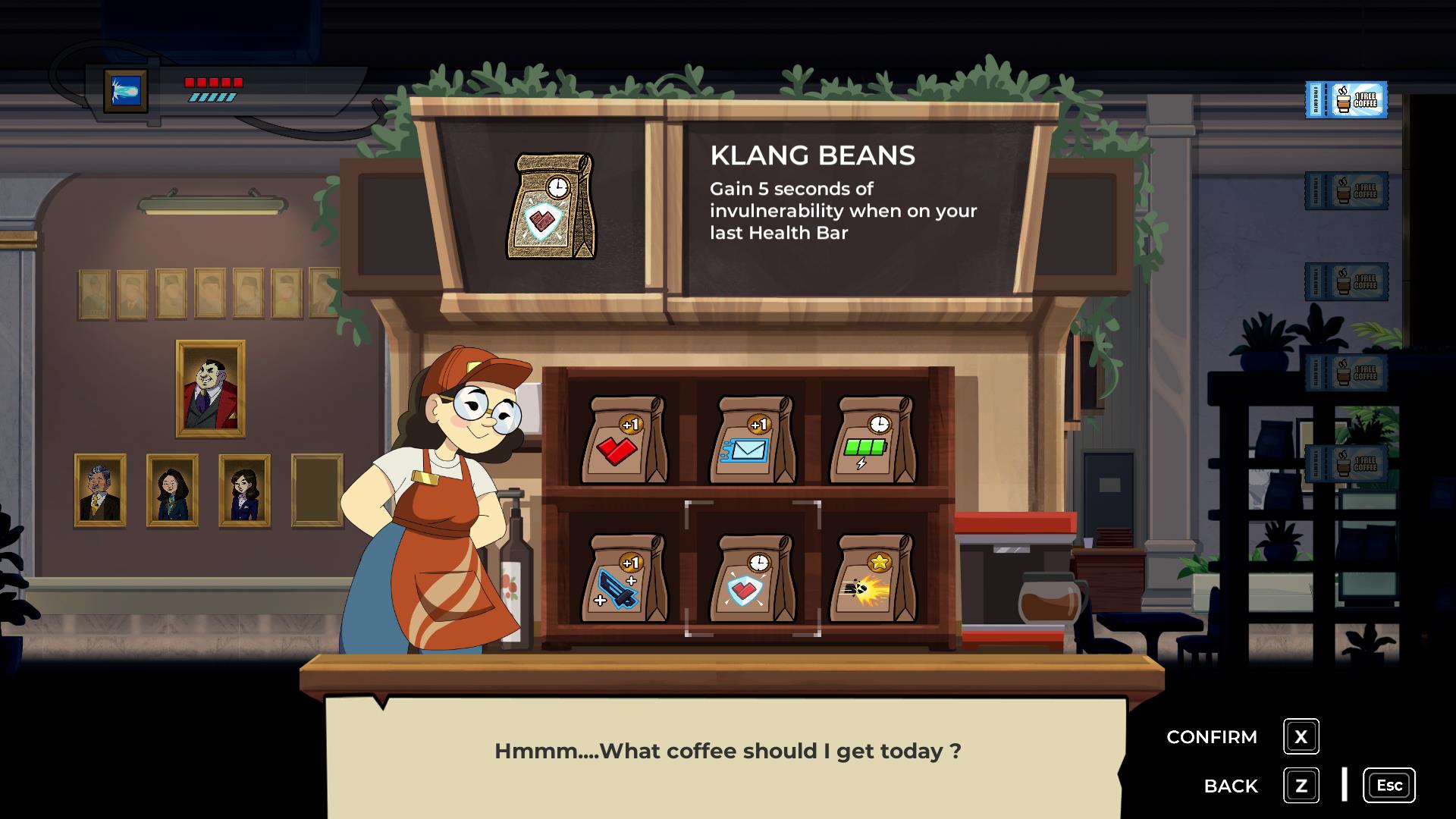 The older I get, the more I enjoy games that allow for multiple difficulty settings. The Company Man provides a couple of choices in that department. On easy mode I found the game to be a little too easy in the first few zones, but just right on the later ones. While I felt the harder mode was, in fact, harder. Not for me, but certainly there for those who want a challenge.

While my time with The Company Man was shorter than I thought it would be (the game can probably be beaten in 4 hours if you’re trying hard enough), it was overall a pleasant play. The setting is the main star here, platforming a supporting character. Some minor details like hit boxes, upgrading, and elevators can be overlooked.

The Company Man plays out like I expected it to, but in a good way. The floors each look different, even though they look different they don’t play too differently from one to the next. Boss battles are fun and different enough that I looked forward to playing each one at the end of a floor. Some of the upgrading options felt a little slow for my taste, but I only have minor complaints to file with H.R. about the game.