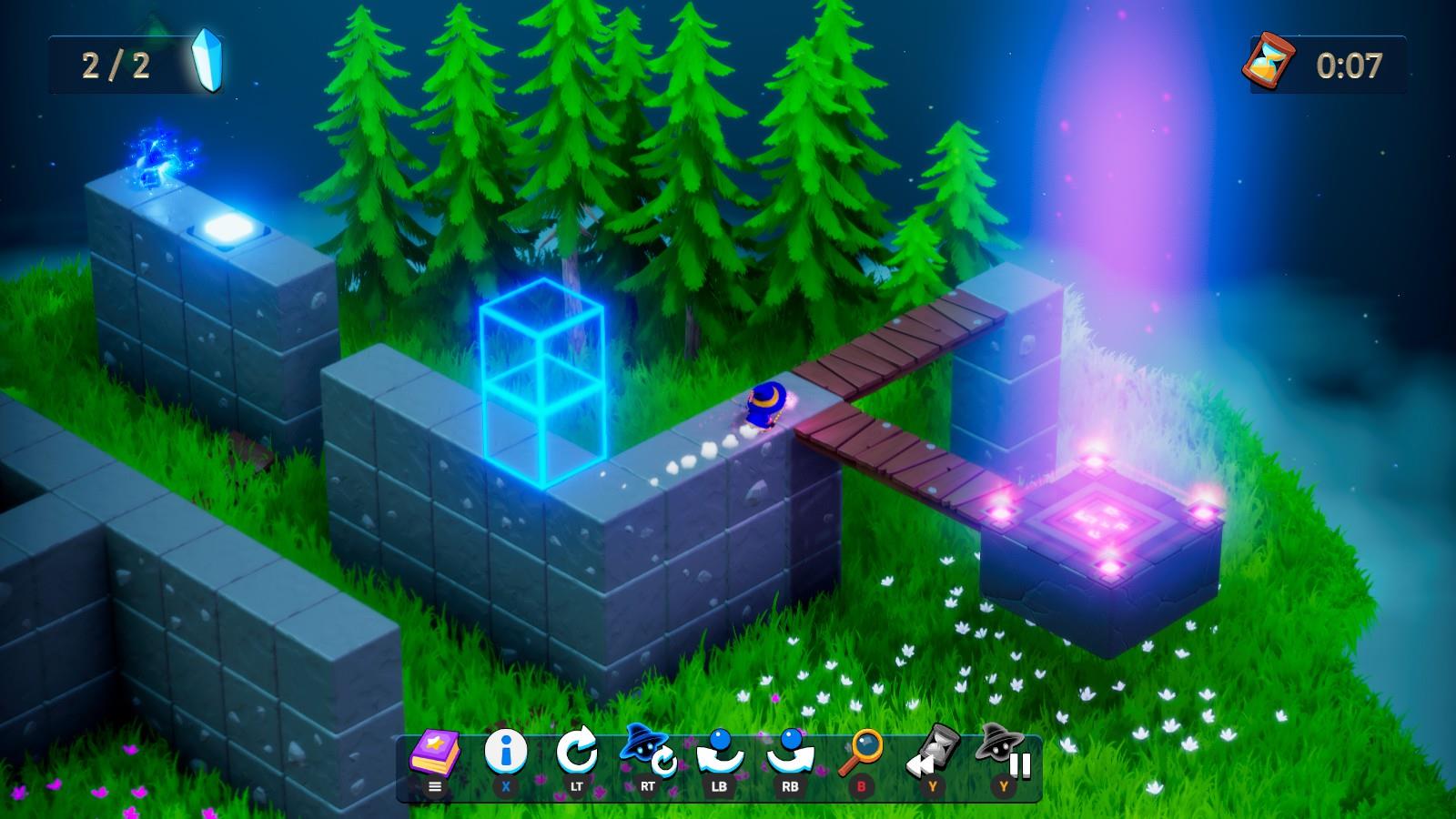 The ability to rewind time would be interesting to have.  Being able to go backwards in time to correct something you did wrong or just to do things differently is something I’m sure a lot of people would love to be able to do, never mind the consequences.  However, what if you could not only rewind time, but then collaborate with yourself, doing one thing while your past self does exactly what they already did, basically completing two tasks at once?  This strangely specific scenario is what you’ll come across in Time Master.

In Time Master you play as Zeno, a…well...time master who has accidentally banished his sister Sophia.  Zeno steps into a portal and upon arriving at his new destination is greeted by the voice of a being who calls himself The Guide who says that he can help Zeno get back what he lost.  To do this Zeno must collect a time crystal, but to find one he must complete a set of trials.  In each trial Zeno needs to collect several crystal shards until he has the amount he needs.  However, each trial contains obstacles that impede Zeno’s path and even if he can clear them, he might find the rest of his path blocked or inaccessible.  Good thing Zeno is a Time Master. 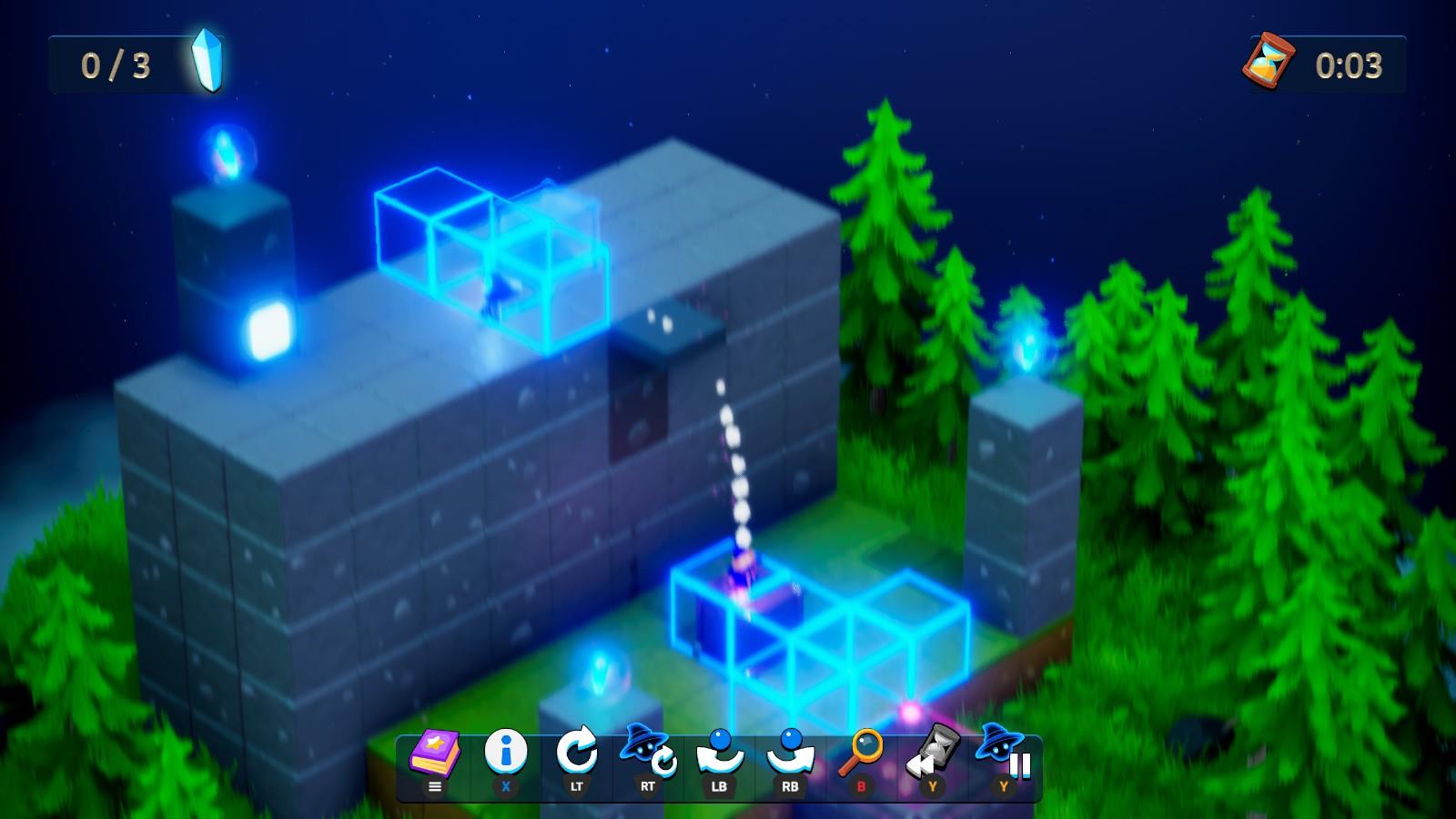 Once you begin moving around during a trial, you can press a button to rewind time back to the start of the level, also resetting the stage timer to zero.  Once you start moving after a reset, you’ll notice a clone of yourself, called a Paradox, taking the exact path you just took. This allows you to basically trace a path with the Paradox who will collect the shards you did on your previous run, while you collect the other shards and get to the end portal (and it must be you, not your Paradox, going to the portal). You can also pause the Paradox for a bit in case you need him to press a button to remove a barrier, but pressing that button would also impede your progress.  It’s easier seen in execution than it is to explain it.  After a level begins you can also press a button to restart the stage, or if you’ve already created a Paradox, another button can put you back to just after creating the Paradox if you messed something up during the second part of the trial.

The trials start out simple enough: collect a few shards, maybe cross a couple of crumbling bridges - basic levels to ease you into the mechanics of the game. Several trials in and you’ll start to get introduced to new mechanics; buttons to press to shut down colored barriers (and possibly colored bridges as well), ice balls to freeze water, fireballs to melt ice, boxes to push around and climb on, and so on. While you have a timer that keeps track of how fast you complete a trial, there seems to be no actual time limit to do so (with one exception), giving you plenty of time to master the various obstacles and mechanics the game offers. Each stage does offer a ranking of up to three stars depending on how fast you complete the trial with each additional star giving you bonus shards. The initial goal is to get 150 shards to progress the story - as you complete trials, more will unlock.  With sixty trials it’s not too difficult to get the initial 150 needed to progress the story, but to reach the end of the game you’ll need another 150 after that, and that will require some mastery of some of the trials. 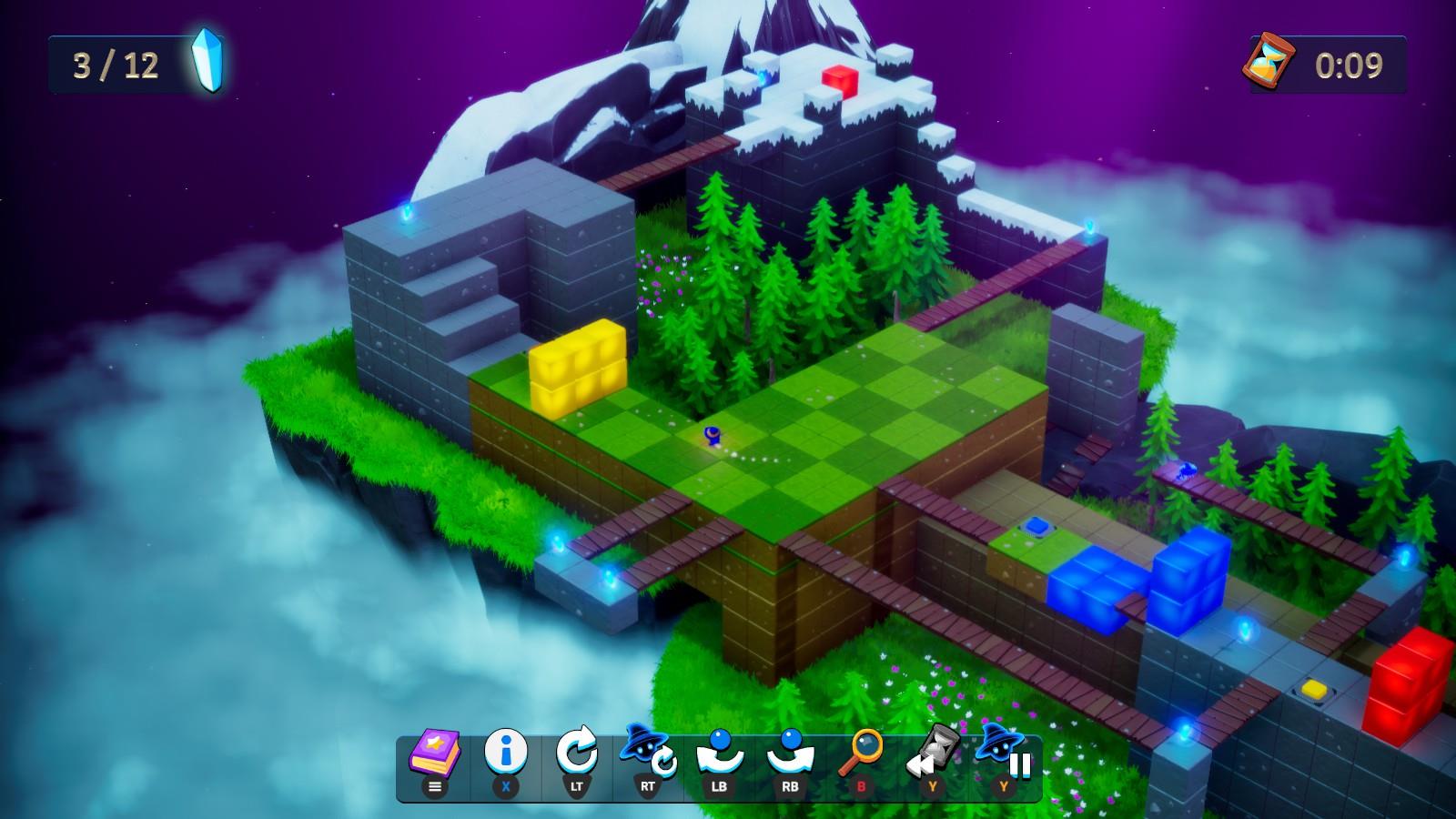 On the surface the game plays pretty well, with a lot of the puzzles being simple to solve, but sometimes difficult - if not almost impossible - to complete fast enough for a three-star rank to get the extra shards.  Getting a one-star on most levels is pretty simple, but some three-star ratings require you to be pixel perfect which can be both good and bad at the same time.  The good news is that games like this don’t require you to get three-stars on each stage to progress; you should find enough shards just playing casually to get most of the 300 needed to finish the story.  However, if you’re like me and try to go for perfection on each stage, several will have you pulling your hair out, even if you know the intended solution.  Case and point, on one trial I watched a video of how to get a three-star rank and I followed the exact path the video took, and still fell a second short.  I gave up on that one for the time being. But with a lot of three-star ranks the precision needed for the highest rating can lead to some frustrations.  There isn’t a hint system per se, but choosing the hint option in the menu directs you to the game’s Discord server where you can post questions about a particular trial you’re stuck on.  Personally I’d prefer a simple hint in the game itself, but at least it seems like people respond rather quickly in the Discord server and are pretty helpful. 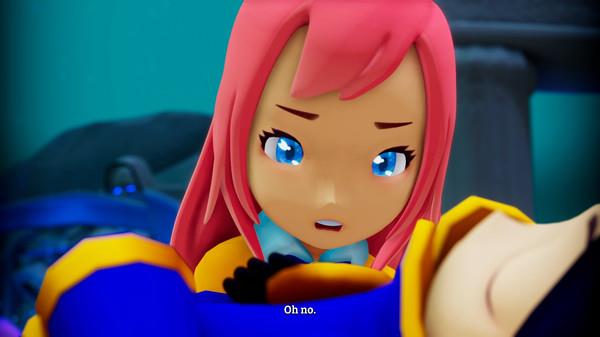 Another frustrating point isn’t quite as bad. With most of the buttons performing various tasks, the jump action and the action to activate things like the fire and ice balls are all on the same button. You’ll be prompted when to activate something, but if you’re on a trial that requires pixel perfect movement to get a good rank, you’ll constantly find yourself jumping when you meant to activate something, forcing you to restart the trial.  This could have been circumvented by assigning a separate button for activating obstacles. While you can remap buttons, the options don’t show a separate option for activating obstacles so it seems like it’s always mapped to the jump button. Speaking of movement and obstacles, later on you’ll have boxes you can push to climb on top of and reach higher platforms, or have the Paradox push while your present-self rides on it. This is fine except if your positioning is slightly off, you’ll end up accidentally sliding the box a bit to the side while moving it which can cause you to accidentally misalign it with wherever you’re pushing it to. It’s not too big of an issue unless you’re going for that three-star ranking where seconds matter.

The other nitpick I have is with the story and a minor one with one character’s voice acting. The story is pretty basic: Zeno accidentally banished his sister and needs to bring her back. There are a couple of cut scenes where plot elements get introduced but nothing is really expanded upon, including the main villain. Yes, there is a villain in this game including a boss fight at the end, and that’s my voice acting nitpick. Zeno and Sophia’s voice actors do a really good job in their roles, including their bickering in the cut scenes as, well they are brother and sister after all. The villain’s voice actor isn’t bad outside of the end when their performance becomes somewhat underwhelming. That said, a puzzle game doesn’t necessarily need a story but if you’re going to include one, at least flesh it out a bit. We learn the game has a villain and meet them, but who is the villain? Why is he the villain? What happened that forced them to be banished to begin with? How did Zeno banish Sophia? Why does Zeno look like the Black Mage from Final Fantasy? (okay, that last one was just something I noticed and personally I think it’s awesome.) 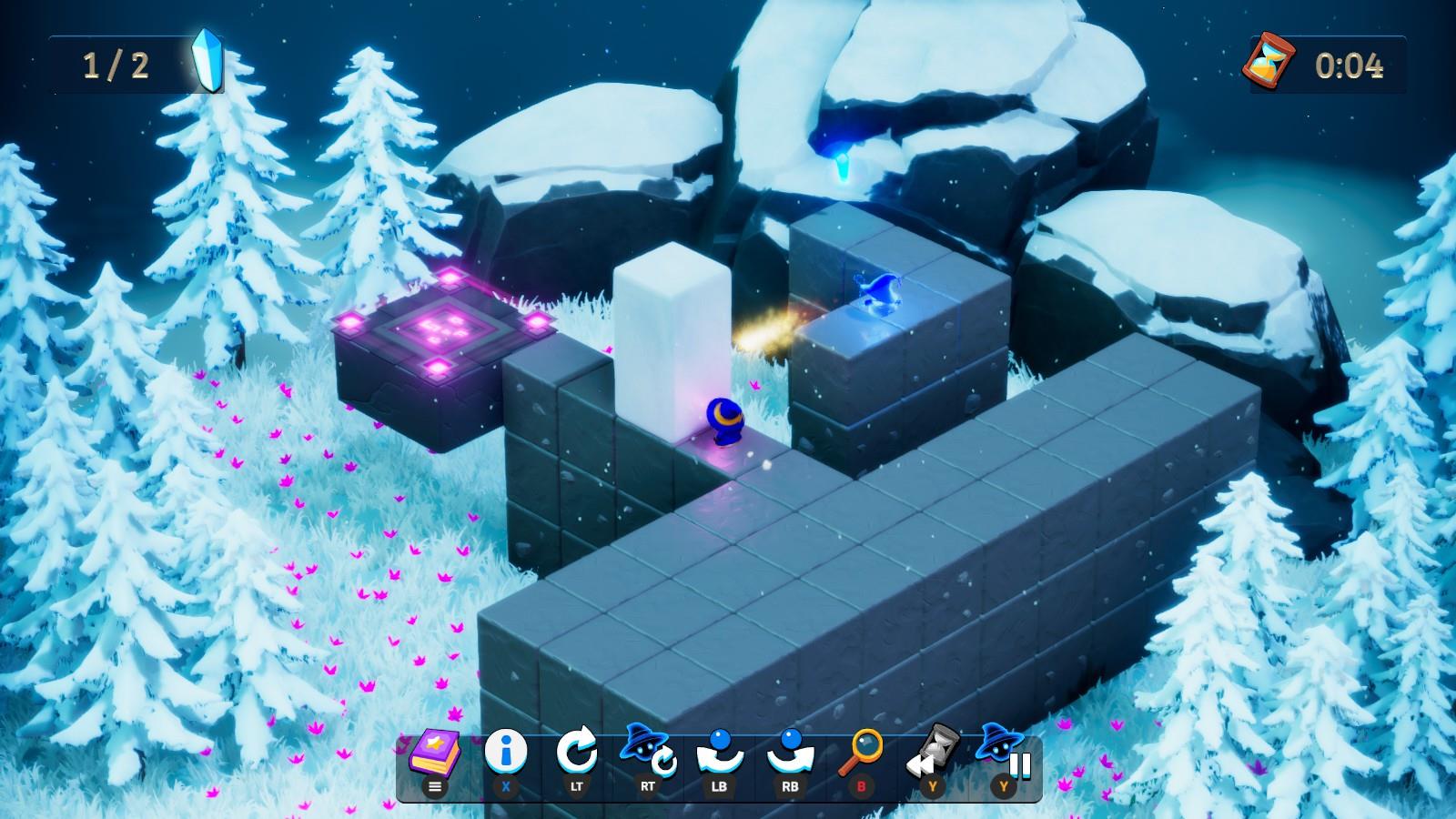 Time Master is a fantastic puzzle game with only a few minor nitpicks if you’re going for all three-star rankings. The visuals are great, the music is nice and relaxing, and the gameplay and mechanics are fairly well executed for the most part. The only real negatives are the somewhat empty story (outside of Zeno trying to save Sophia) and the nearly pixel-perfect movements needed for some three-star rankings. Thankfully you don’t need all of the shards to finish the game (around 300 out of over 400) but if you’re going for perfection, you’ll need to be absolutely perfect.  For fifteen dollars on Steam this is definitely worth picking up and giving a shot, and then maybe rewinding time just to play it again. Okay, that was a bad attempt at a time travel joke, but the point still stands.

Time Master is an incredible puzzle game with great visuals and interesting gameplay mechanics that are executed almost flawlessly.  There are a few minor issues; a somewhat empty story outside of Zeno saving his sister, as well as the need to be pixel-perfect to obtain some of the three-star rankings. But thankfully you can play the game casually and still finish the game’s story without too much stress.