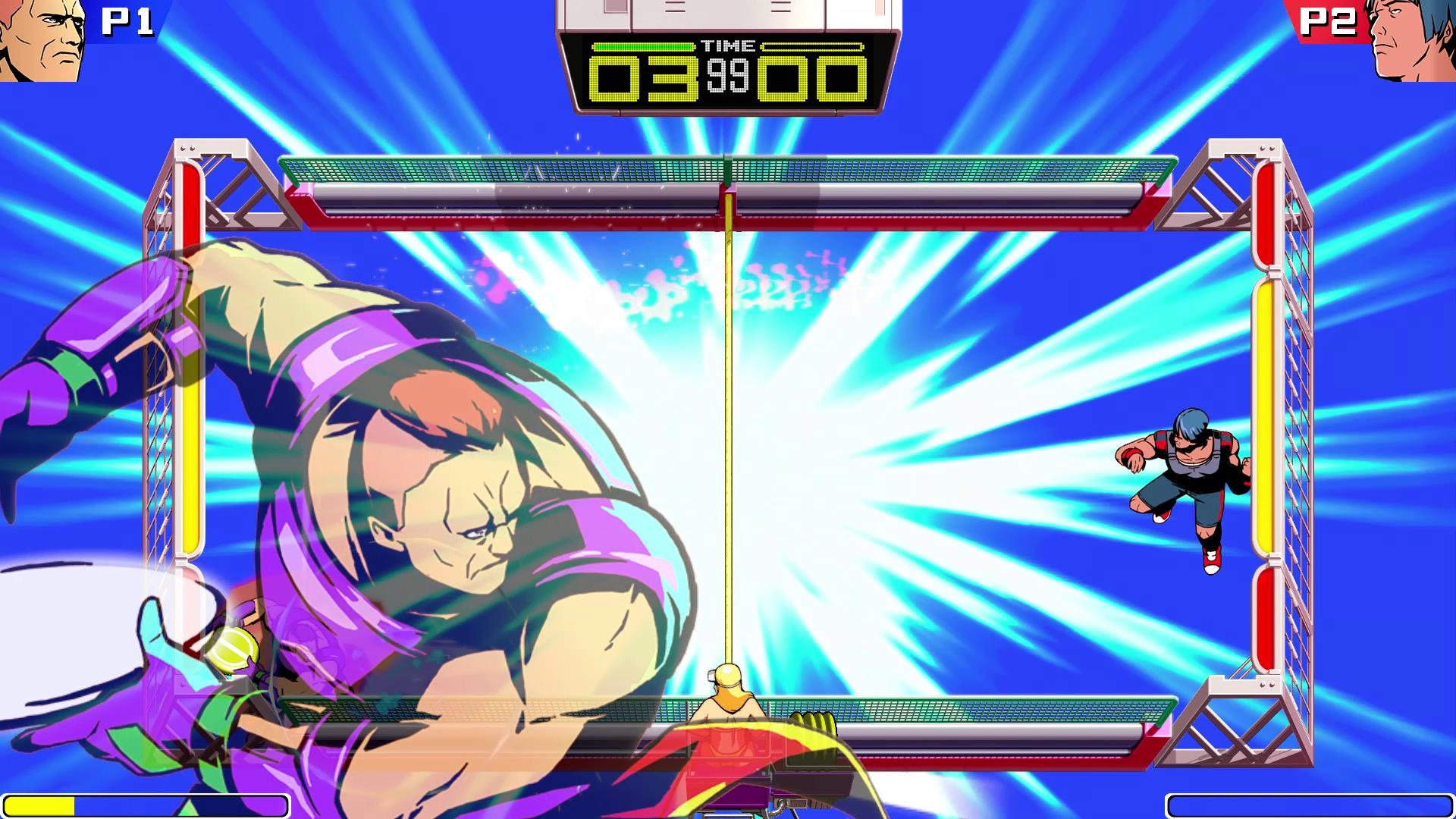 The original Windjammers was one of those amazing and unique arcade games that showed up in Neo Geo arcade machines in the 90s. There was a Neo Geo at my local arcade when I was younger, but sadly it never had Windjammers in it. I did get to play Windjammers much later, when it was released digitally on the PS4. Imagine if you took the Atari Classic Pong and combined it with the mechanics of a fighting game. When you do that, you got Windjammers and now, almost 30 years after the original game was released, Windjammers 2 is releasing. Windjammers 2 maintains the spirit, look and - most importantly - the gameplay of the original and provides for a fun arcade vs. game, even though the end product does feel really light on content. 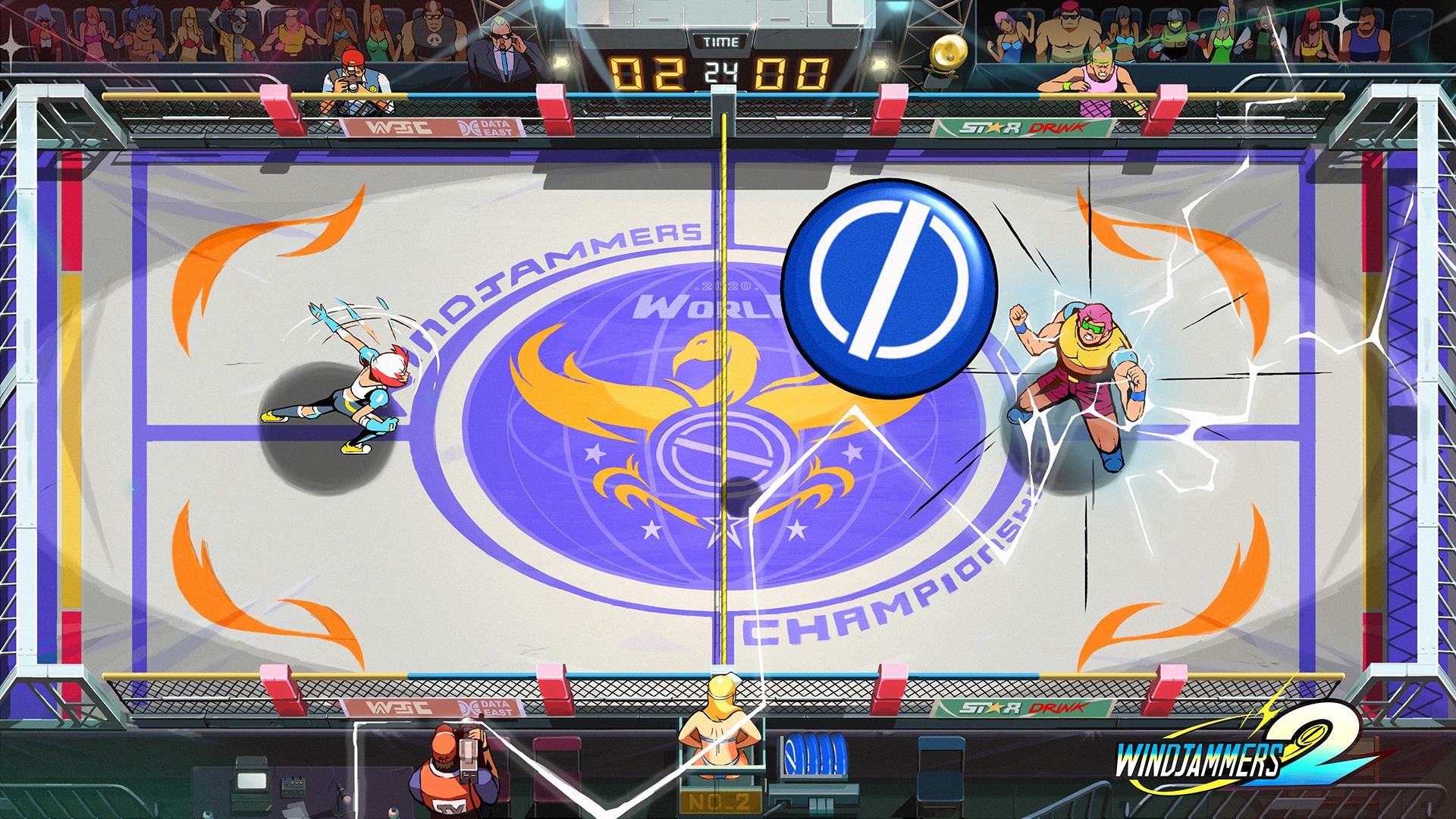 Windjammers 2 features all of the characters from the arcade original plus an additional four brand-new characters. Each character has their own stats, the two being power and speed. Speed determines how fast you move around the field and power determines the strength of your throws. Some characters have both stats balanced right in the middle, while others have higher power or speed. Windjammers 2 also does a great job of being a sequel while also keeping the spirit of the original alive. The graphics, the music, the arenas all look and sound fantastic and feel like something that would have been seen in sequel had it been released in the 90s.

The gameplay is simple. You throw the disk and forth at each other trying to hit the scoring zones on your opponents side. The yellow section will earn you three points, the red section five points, and if you fail to catch the disk as it is falling then a "miss" is worth two points. The first player to get 15 points - or whoever has the most points when the timer ends - wins the round. Two rounds wins the set. 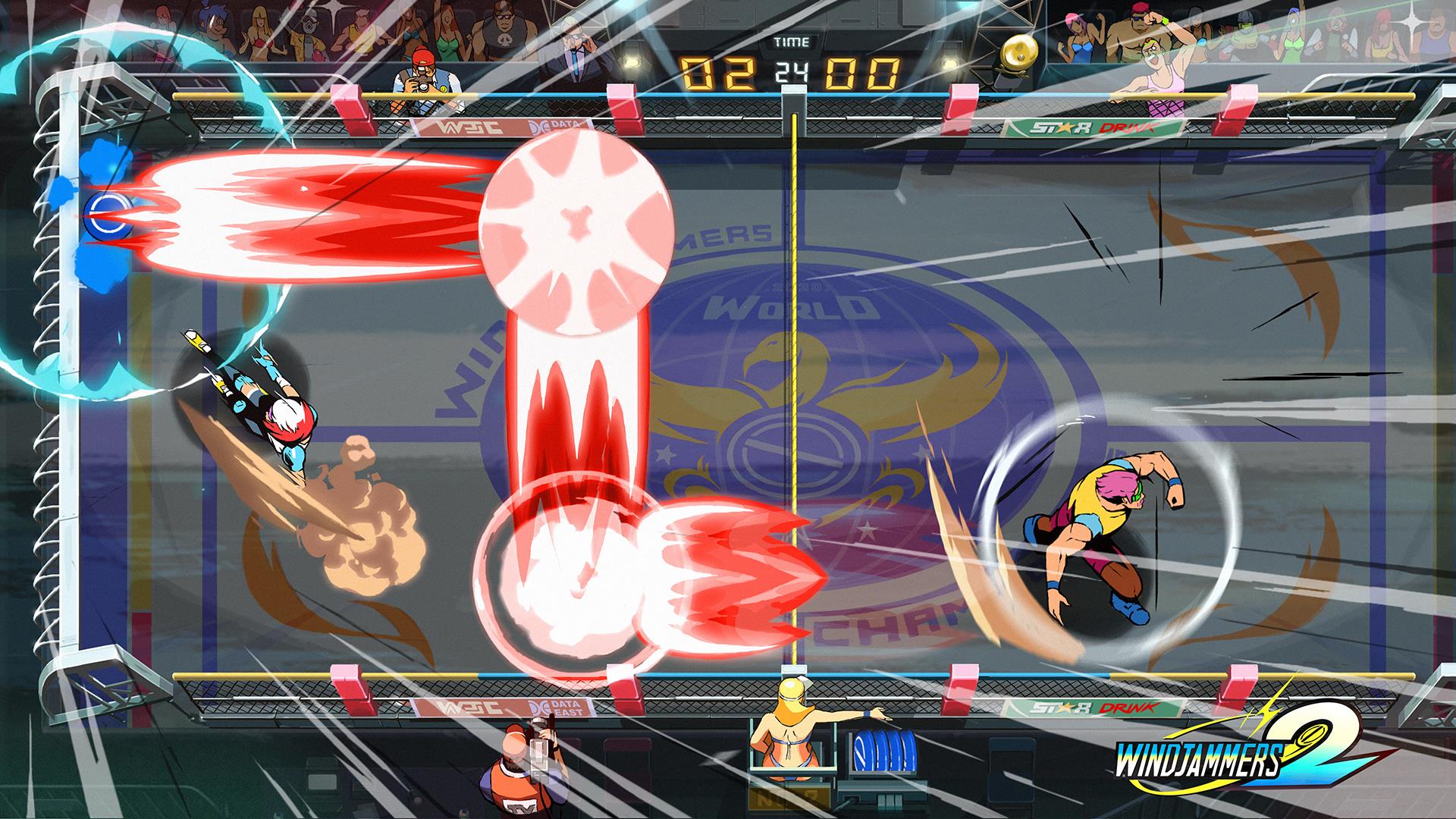 Hitting the opponents' scoring zones, however, is much easier said than done. The walls of the arena are fixed with bumpers that will bounce the disk like a pinball, so you need to be constantly aware of where the disk might be going and rush there before it flies off into your goal. Each player also has a set of different throws they can utilize. Performing a half circle motion before firing off the disk will curve the shot, pressing the O button will lob the shot, and you can reflect shots by pressing certain buttons before you catch it. Standing under a disk as it's falling down from the air can charge your character and allow for more advanced attacks. This is something you are gonna want to learn how to do, especially learning how to deflect the disk into the air to start charging up. Each character also has a unique special attack. As the match goes on, each player has a meter which will start charging. Once the meter is fully charged, you can unleash a special attack which is incredibly difficult to dodge or predict, as most of them involve the disk flying at lighting speeds or changing directions on a dime, or some really troll-ish ones where the disk will start heading towards a goal and then will then start twisting around and fly off in another direction. 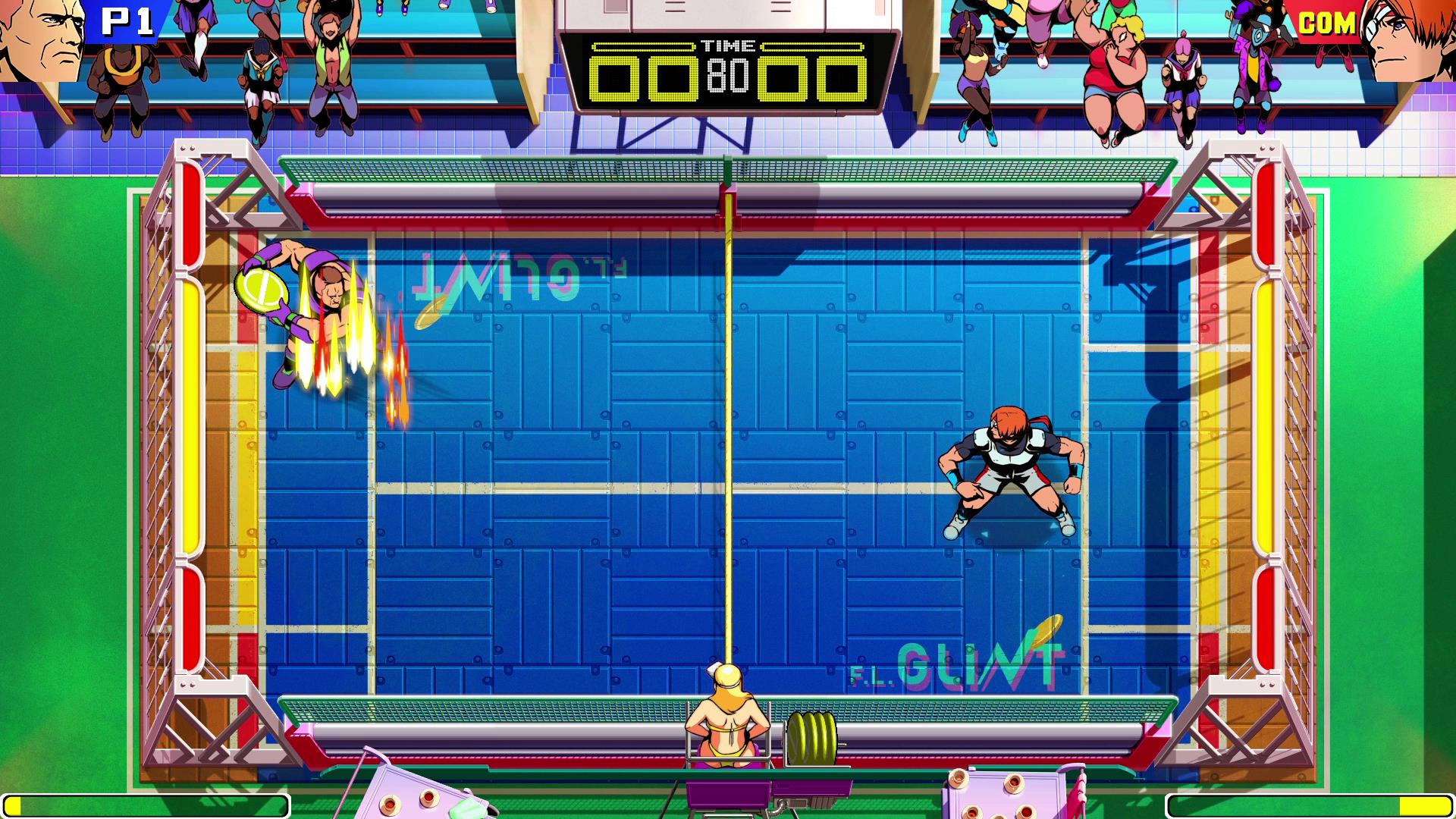 When you get into a groove and the disk starts to volley back and forth, Windjammers 2 makes for an absolutely intense game. I would even go as far as to say it's almost like a fighting game where you constantly have to read your opponents moves, try to react to them and then try to fake them out to score. The one thing I like about the game is how there are various arenas in the game. From the classic beach, to an indoor court, junkyard, and even a wrestling ring - and each come with their own mechanics as well. In some arenas the scoring zones may be flipped, so you may have two five point zones and only one three point zone. For some, the scoring zones might be smaller or bigger and some of them have additional bumpers in the middle. So the arena you compete in is something you also need to take into consideration for a match and may require you to switch up tactics. 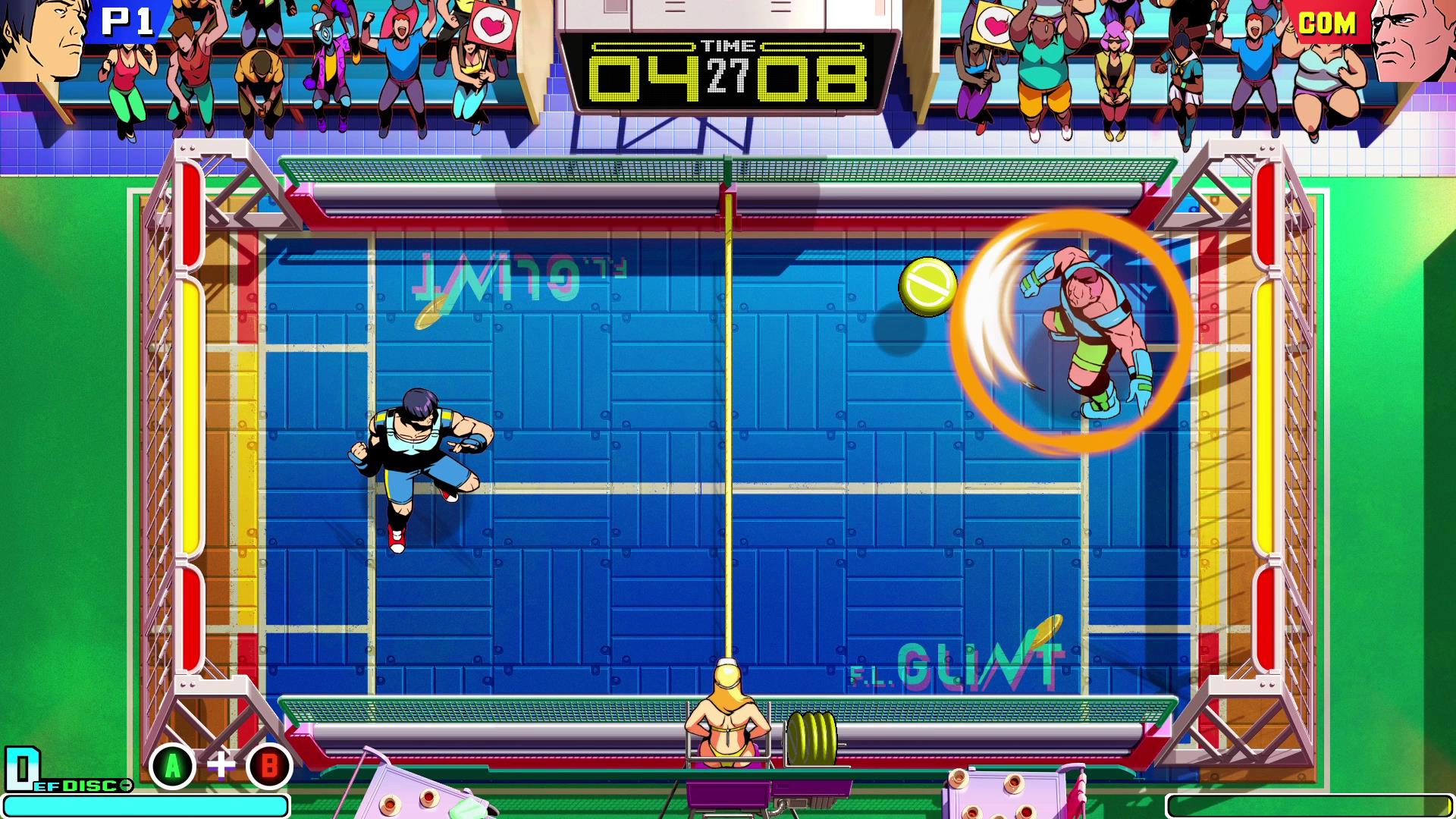 Windjammers 2 is a ton of fun but this is going to be one of those games where I would recommend only grabbing it if you have others to play against, or want to play online, because the game is very light on content for single players. But since this is a budget arcade-style game, I can see why. You have your versus mode where you and a friend can play against each other on the same system, and you also have online play where you can play against others online and check leaderboards. The only other mode in the game is "arcade" which - like a fighting game - has you pick a character and you have to defeat the other characters in the game to win championships. There is also a "training" mode, but I use that term lightly. All it is is a series of pictures that show you all the moves you can perform in game, and it doesn't really do a good job of it as some of these moves require certain conditions like if you are standing under the disk. 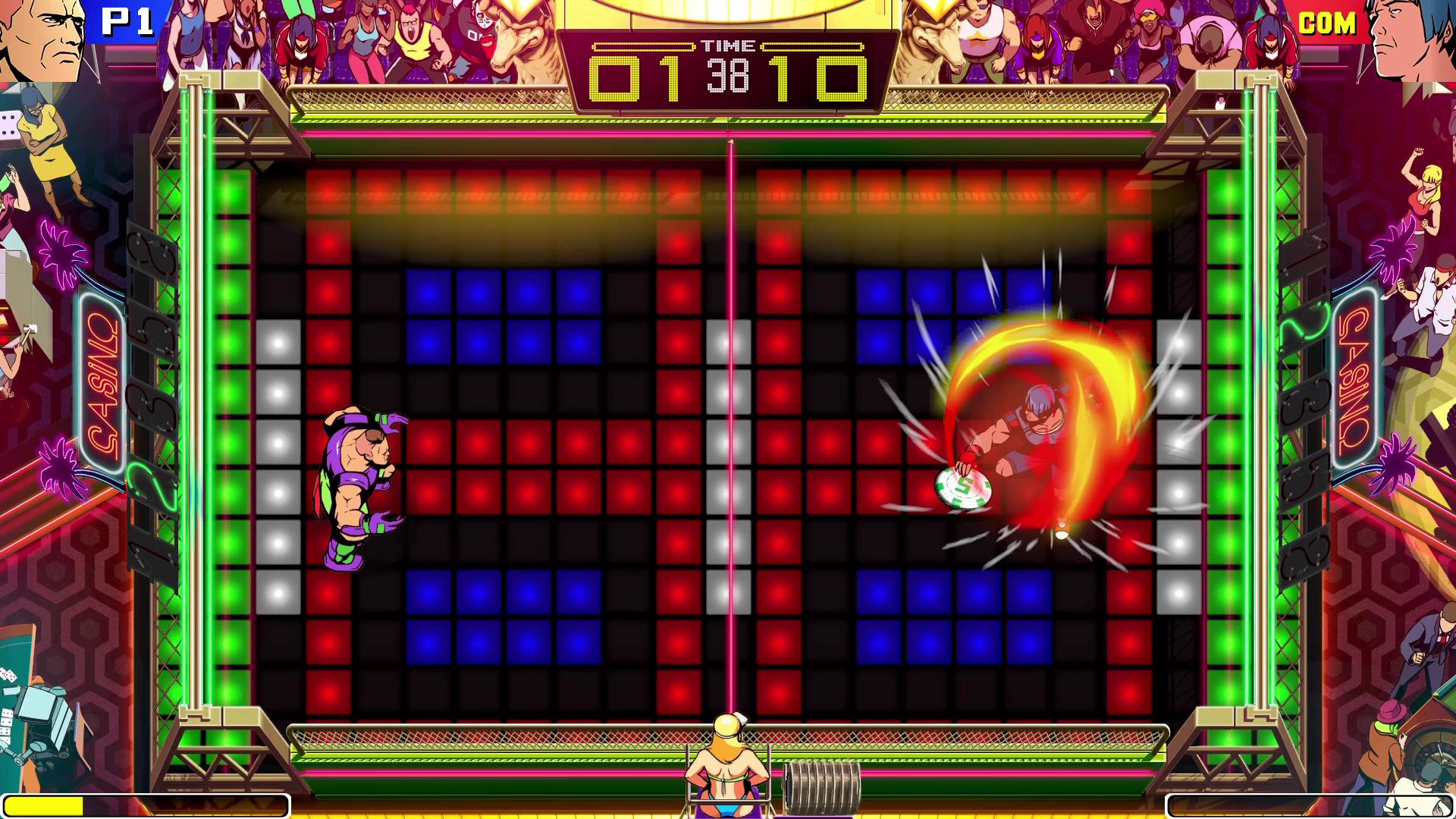 Windjammers 2 is a fantastic follow up to the original arcade game, retaining the spirit and fun of the arcade original while updating some of the mechanics but the light amount of single player content will mean this game is probably only going to be for those who are looking for a strictly competitive game either with friends or online against others.

Windjammers 2 is a fast and fun arcade style game that fans of the original and competitive vs games will enjoy. But the game is very light on single player content, so unless you want to play against others online or with friends, you probably won't get much out of the light arcade mode.