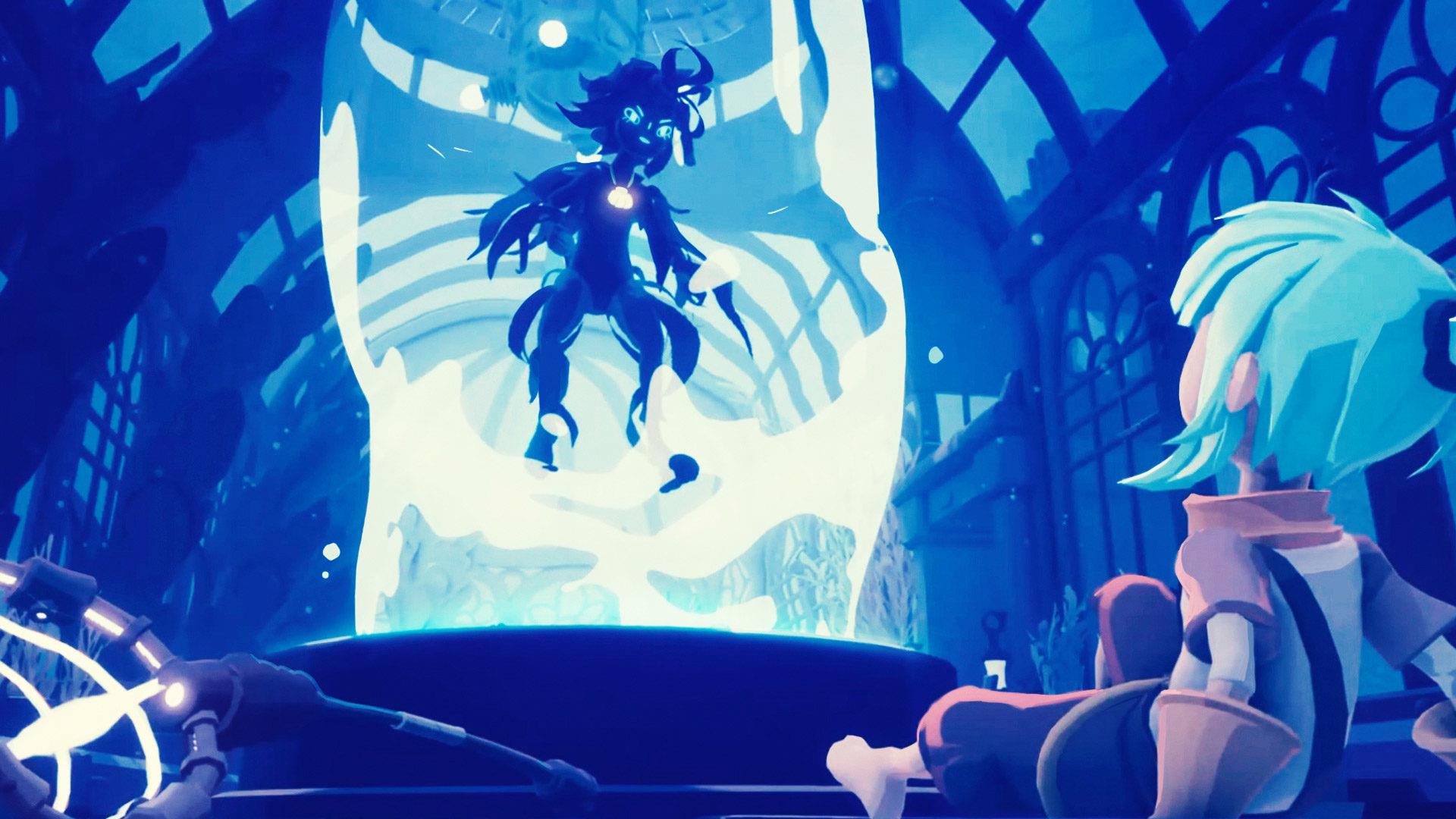 To fill the lull between Christmas and New Year, I usually like to go back and play a few of the games I’ve received for “free” from various services over the previous year. Between PlayStation Plus, Game Pass, the Epic Games Store, Amazon Prime, and Stadia Plus, my backlog is usually bursting at the seams. There are usually at least a few games that I really wanted to get to, and the foremost among those games this year was Wavetale.

Announced back in early November at Thunderful Games’ “Thunderful World” digital event by none other than Mark Hamill, the game was dropped for free on Stadia Pro right at that moment, resulting in almost every Stadia-based social media channel trumpeting their delight. The game went on to have a bit of a moment in certain circles, but after checking out an hour or two of gameplay, I was never able to circle back around to it. 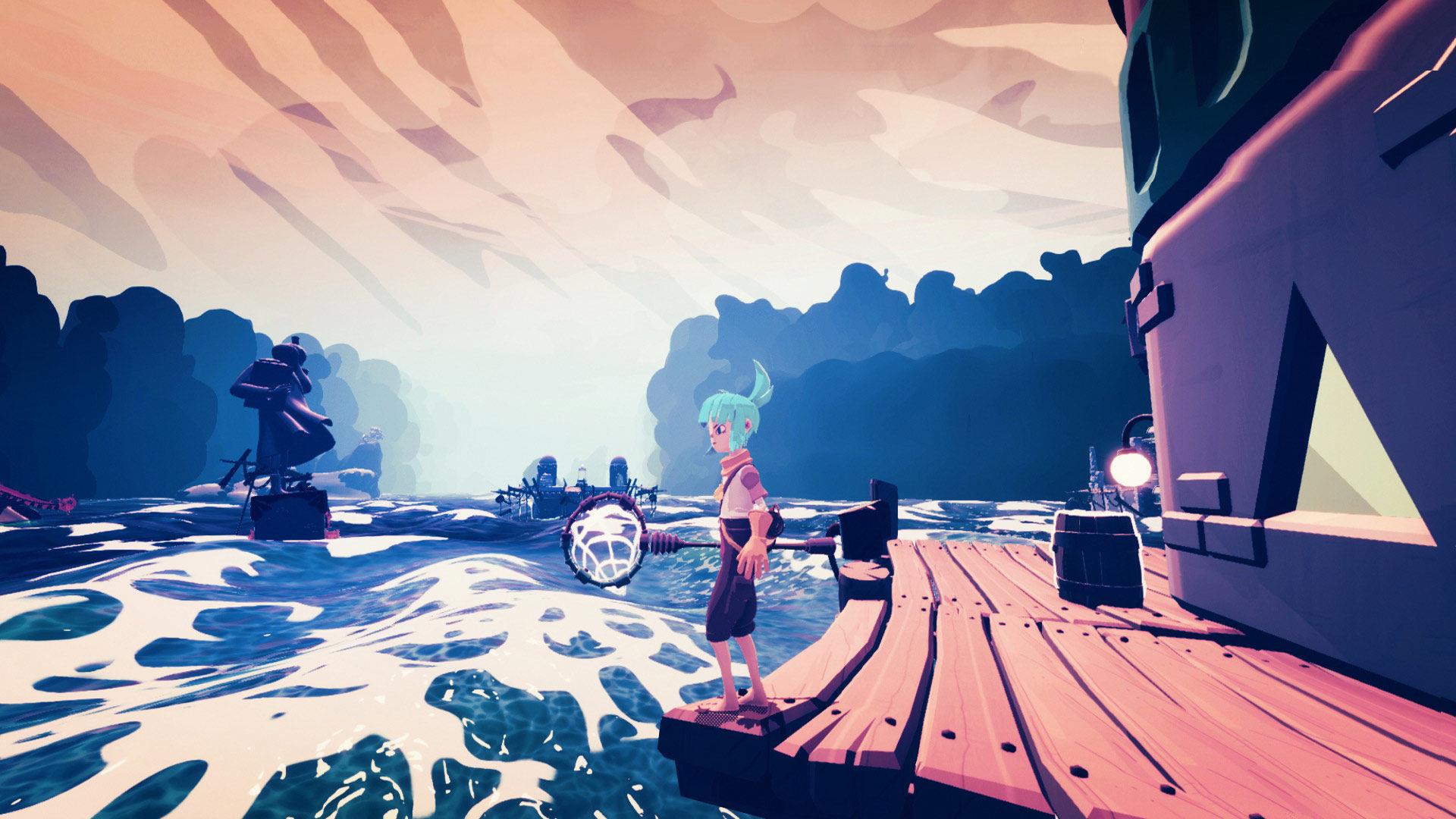 Until Christmas day, that is. My family Christmas plans were cancelled for Covid-related reasons, and after doing the whole Christmas morning thing, I was left wandering in circles around the house. What better to do than settle in with a nice, relaxing game that I wanted to finish? So that’s what I did, completing the rest of Wavetale while chilling on the sofa, my kids happily playing with their new toys and crafts on the floor beside me.

Wavetale is a perfect game for just such an occasion, it turns out. The game is brief (maybe five or six hours), and so undemanding that you can play it while only focusing on it halfway. That may sound like a backhanded compliment, but I mean it in the nicest way possible. I’ve heard the word “relaxing” thrown around about a lot of games, but never so aptly as when it is used to describe Wavetale. There is nothing in this game that will challenge veteran players even slightly, but sometimes that’s what you want. On Christmas day, I just wanted to turn my brain off, click some buttons for a few hours, and look at the pretty colors. 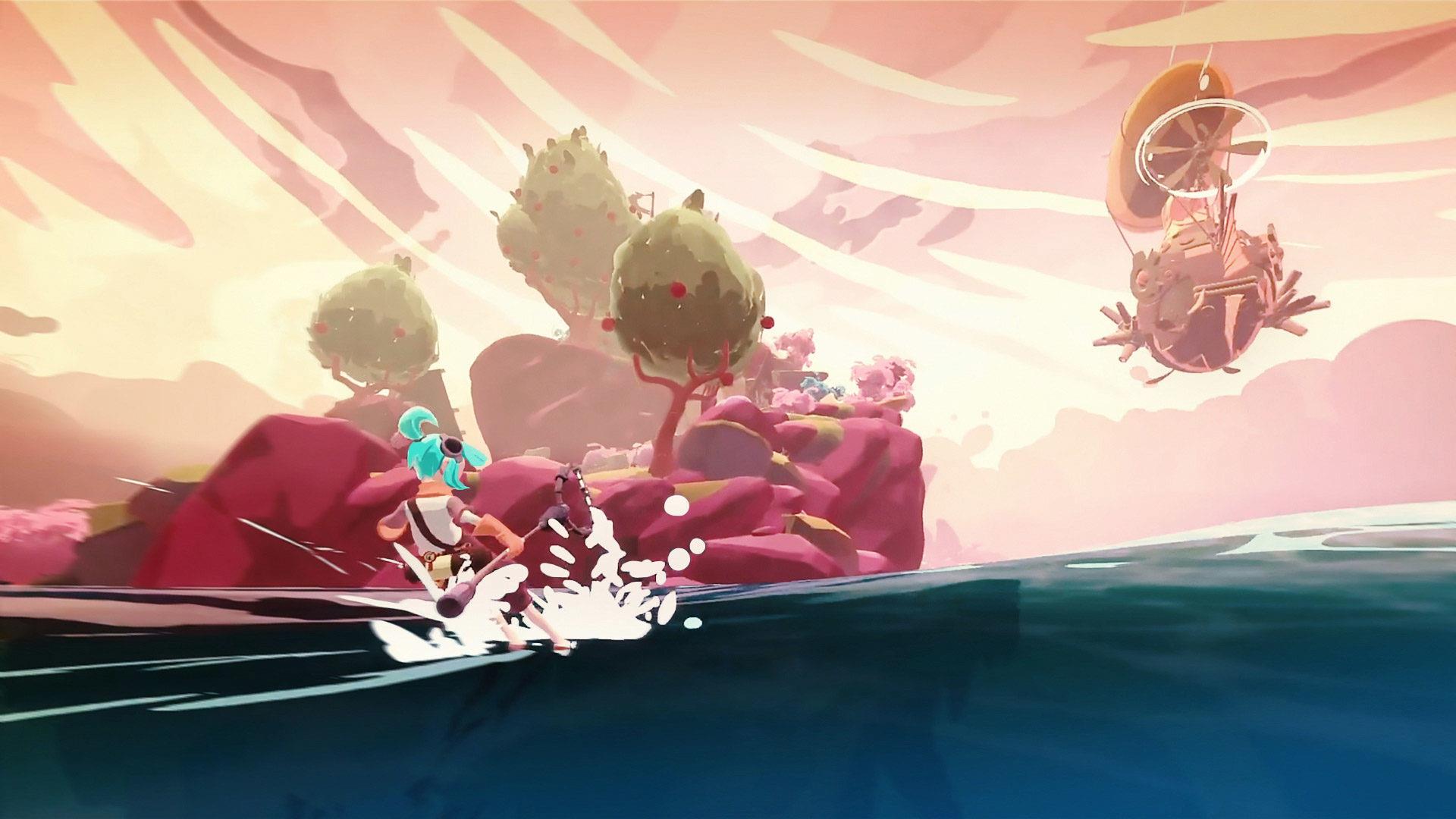 In Wavetale, players take on the role of Sigrid, a young woman living in a flooded post-apocalyptic world with her cranky grandmother. The two women maintain a lighthouse, which is used to push back an encroaching fog, protecting the surrounding islands from whatever dire things lurk in the murk. At the beginning of the game, the deadly fog that encroaches on the islands starts overwhelming the area. Things are quickly spiraling out of hand, so the duo decide to go on an adventure to figure out what's going on and set things straight.

Sigrid quickly learns that she has some extraordinary abilities, which set her apart from the folks in the Waterworld-style neighborhood. She has been adopted by an underwater doppelganger, which allows her to walk, and then skim, and then skim really-really-fast across the water. This surfing mechanic feels great – the player simply holds down the R2 button and zips around with the left stick – which makes exploring the islands an absolute breeze. Sigrid zips alongside her grandmother’s boat, hopping and skipping along over the waves. 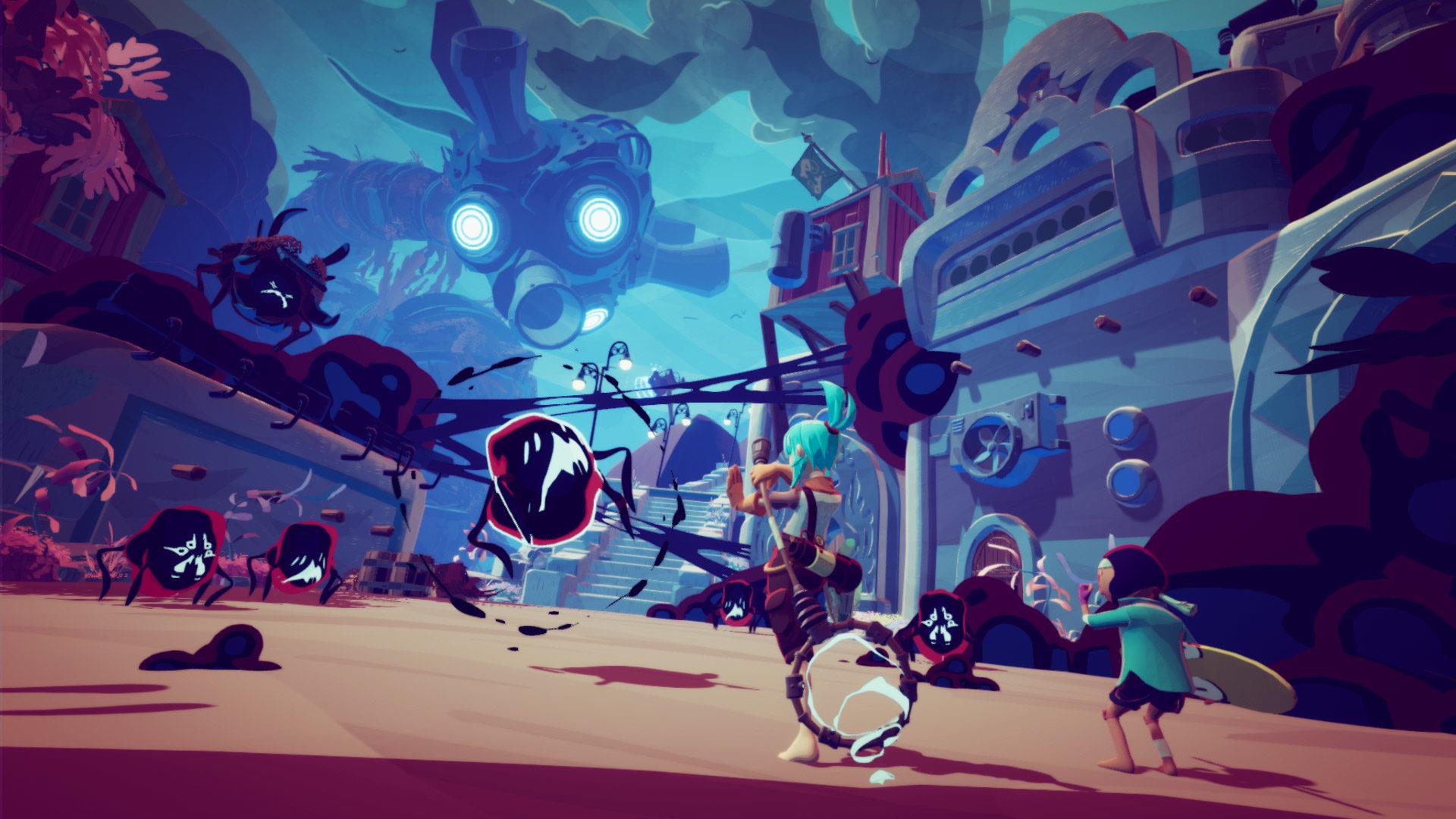 Eventually Sigrid unlocks a few other abilities, which makes the traversal in Wavetale and absolute joy. In long corridors between the fog, Wavetale offers the player fun chutes and rollercoaster-like tracks to glide across, spaced correctly so you can chain them together and cover huge swaths without touching the water. There isn’t a gameplay reason for these to exist, really, other than that they are fun.

Like the rest of Wavetale, the exploration in the game isn’t terribly stressful. For the most part, the player cruises along from point to point, guided by icons on an overhead compass, while the story unfolds around them. Each island destination offers a bit of mild challenge, with the player needing to climb around towers and flip switches, jump on platforms, and zip higher and higher using Sigrid’s handy zip line. This simple platforming can occasionally stump the player for a moment, but a quick camera pan around the area typically illuminates the path forward. 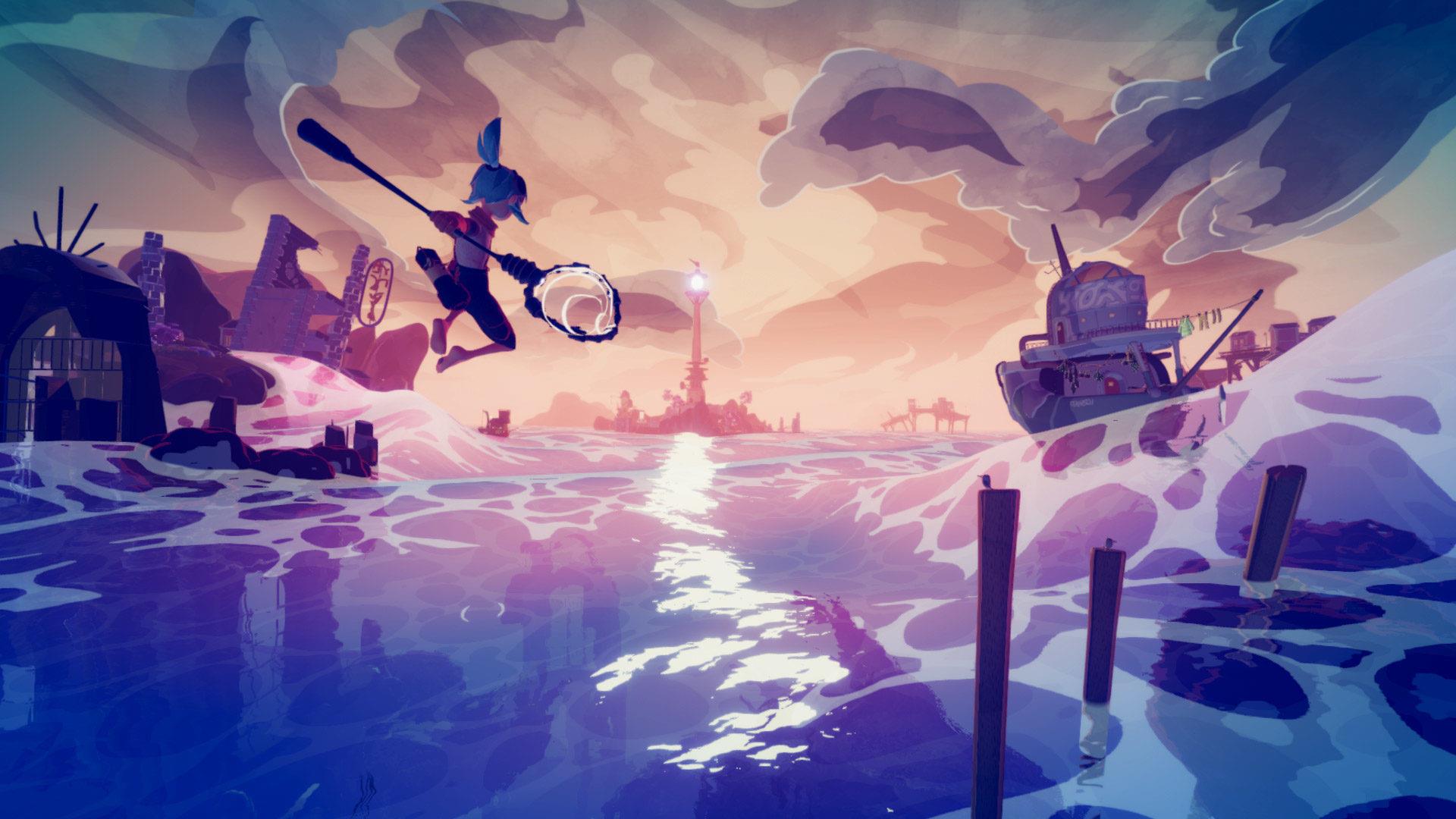 It’s totally fine to go wandering off onto side islands to explore, but the only rewards in the entire game are little bits of money that can be used to buy cosmetics for Sigrid, which makes leaving the beaten path a little less appealing. I found myself collecting pickups because video games have trained me to, though I always had more than enough cash on hand for a new hat (or whatever else my daughter was demanding I buy).

Combat is equally non-taxing. The player has quick and heavy attacks at their disposal, but I rarely found myself using the heavy attack. The enemies politely wait their turn to be slaughtered, and a couple of light whacks with Sigrid’s stick pretty much does the trick. A few different enemy types show up later in the game, but once you figure out how to beat them, you can pretty much chain attacks together and wipe the board without worrying about getting hit. Occasional boss fights are equally non-pressing, relying on the game’s fun platforming instead of direct combat to defeat the baddies. 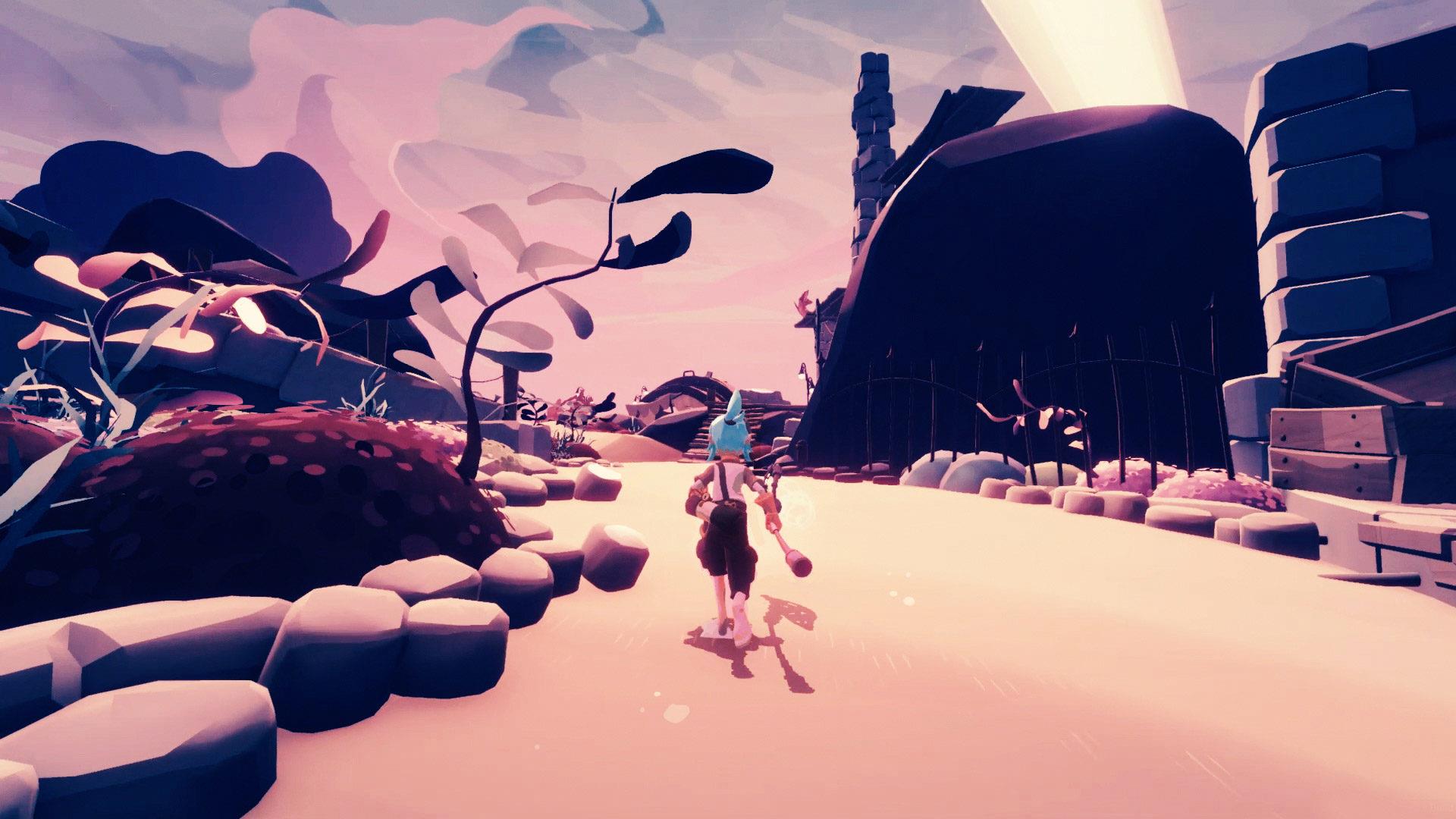 I know that there are a lot of Stadia doubters out there, and I’m over being one of the ocean of voices screaming “just try it!” into the abyss. Is Wavetale worth getting a Stadia account to play? Well, seeing as how the barrier to entry for getting a Stadia account is “have internet”, I would say that yeah, Wavetale offers one more compelling reason to sign up for a free trial and check Stadia out. Who knew that offering people a way to play next-gen console-level games for free without a console would be such a hard sell? But I digress.

Wavetale is fun and approachable, going for a light and airy feeling as opposed to being overly challenging. It tells a nice tale about family, and the stories that we carry with us from generation to generation, with a sweetly warm (and pleasantly melancholy) feeling running through it. Though I wouldn’t technically call Wavetale a “kids game”, I would be perfectly comfortable handing over my controller to my kids with the knowledge that they could overcome the game’s beginner-to-intermediate difficulty. 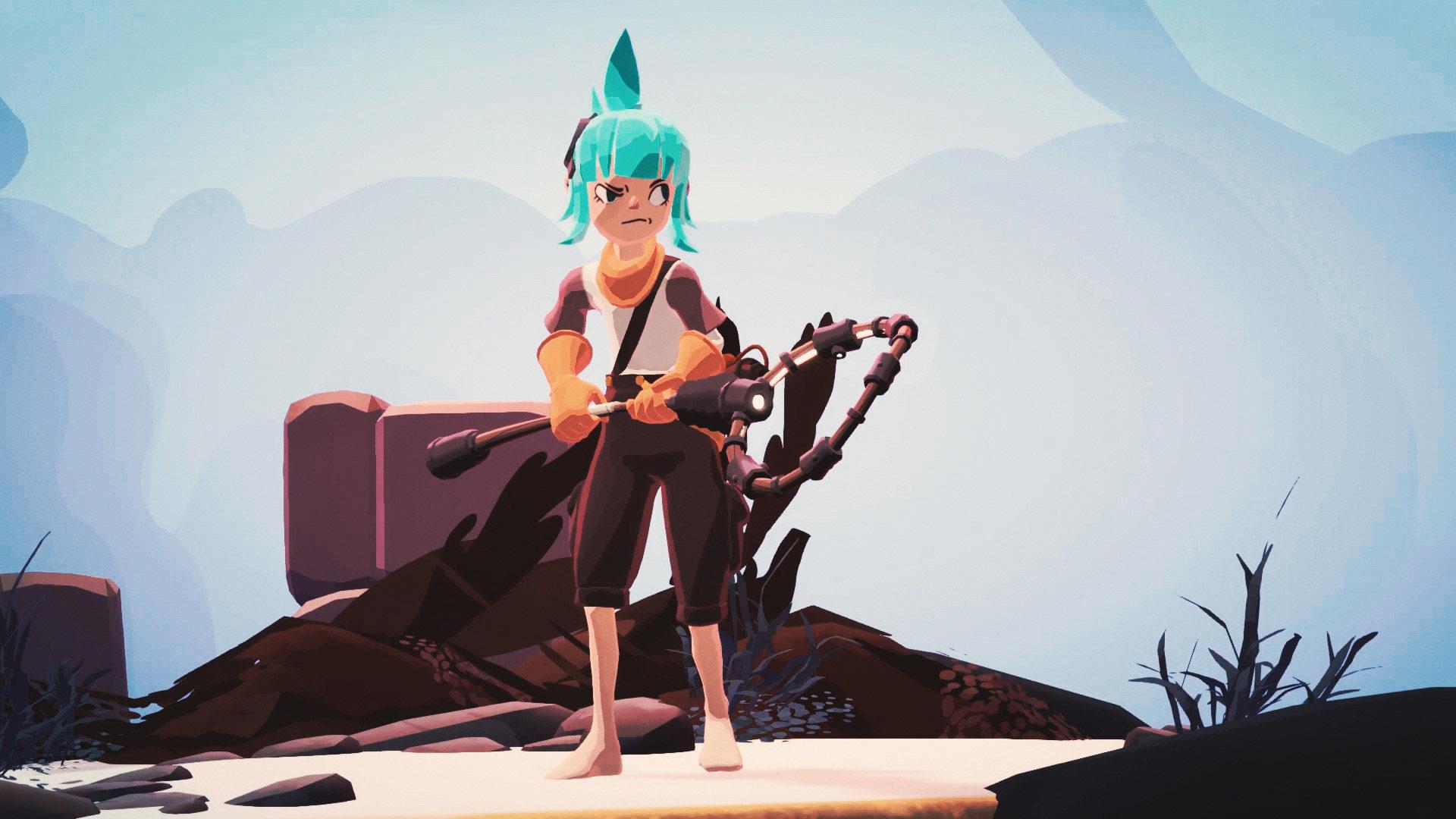 Not all games need to be insanely difficult to be rewarding, and not all gamers are constantly looking for the next big challenge. Sometimes you just want to run through a little adventure for an afternoon to feel like you accomplished something instead of just sitting and watching dumb Hallmark Christmas movies. If you find yourself in that sort of mood this holiday season, you could do far worse than firing up Stadia and checking out Wavetale.

Wavetale offers players several hours of low-stress fun, with a great traversal system and non-taxing combat. Along the way, it tells a sweet story about family. With pleasant visuals, beautiful music, and gameplay that most gamers will be able to autopilot through, Wavetale offers a fun way to while away a quiet afternoon.