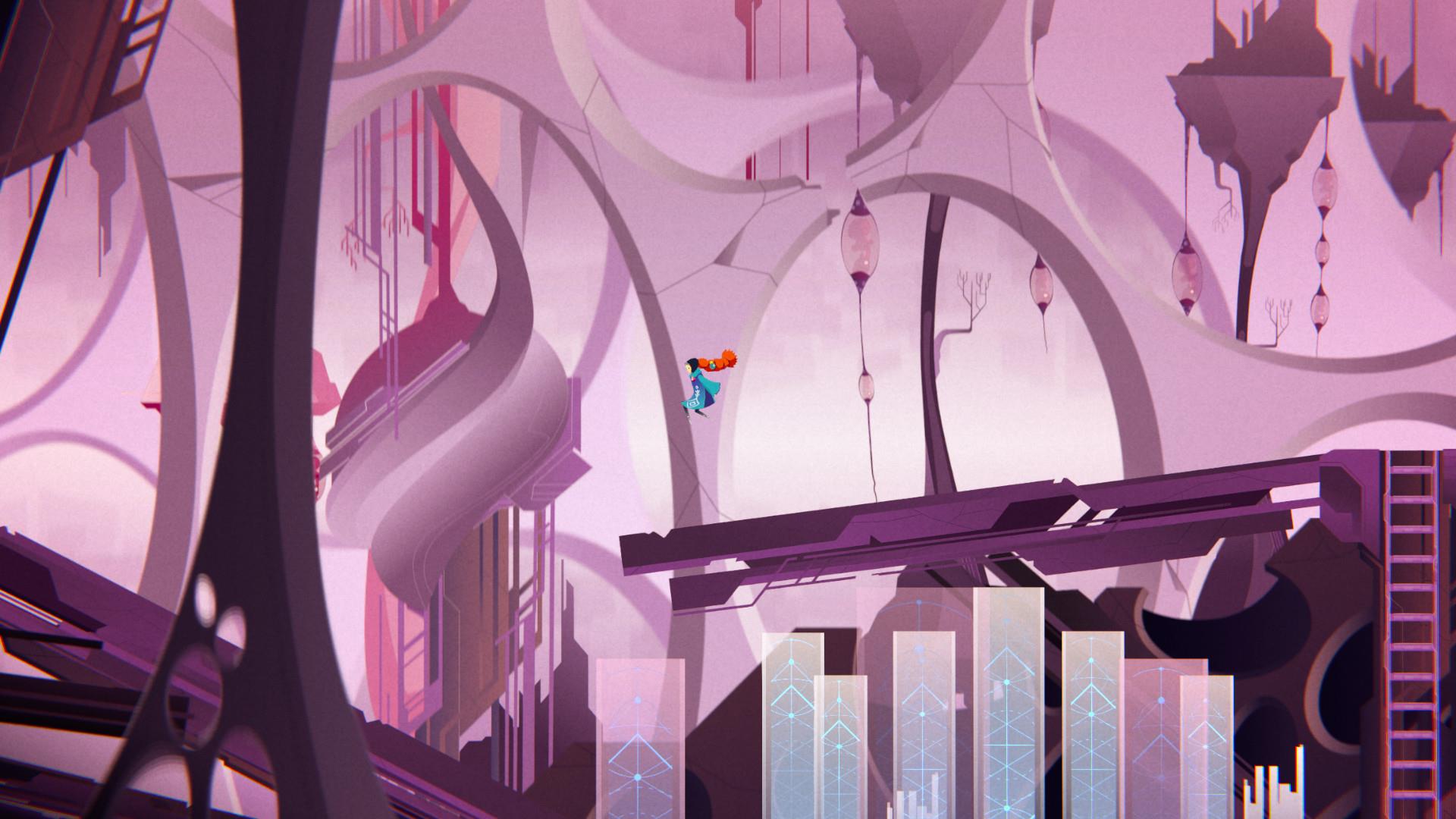 Sometimes a game doesn’t have to be long to be good. While a game may only take a few hours to complete, how it engages the player is typically what matters. That doesn’t mean that a game gets a free pass just because it engages the player in a fun and meaningful way, but that’s where a lot of opinions can differ. Today’s review is one where I played through the game, and then had to sit and think a bit before writing it. While my time with the game was short so to speak, how much of a lasting impression did it leave on me? 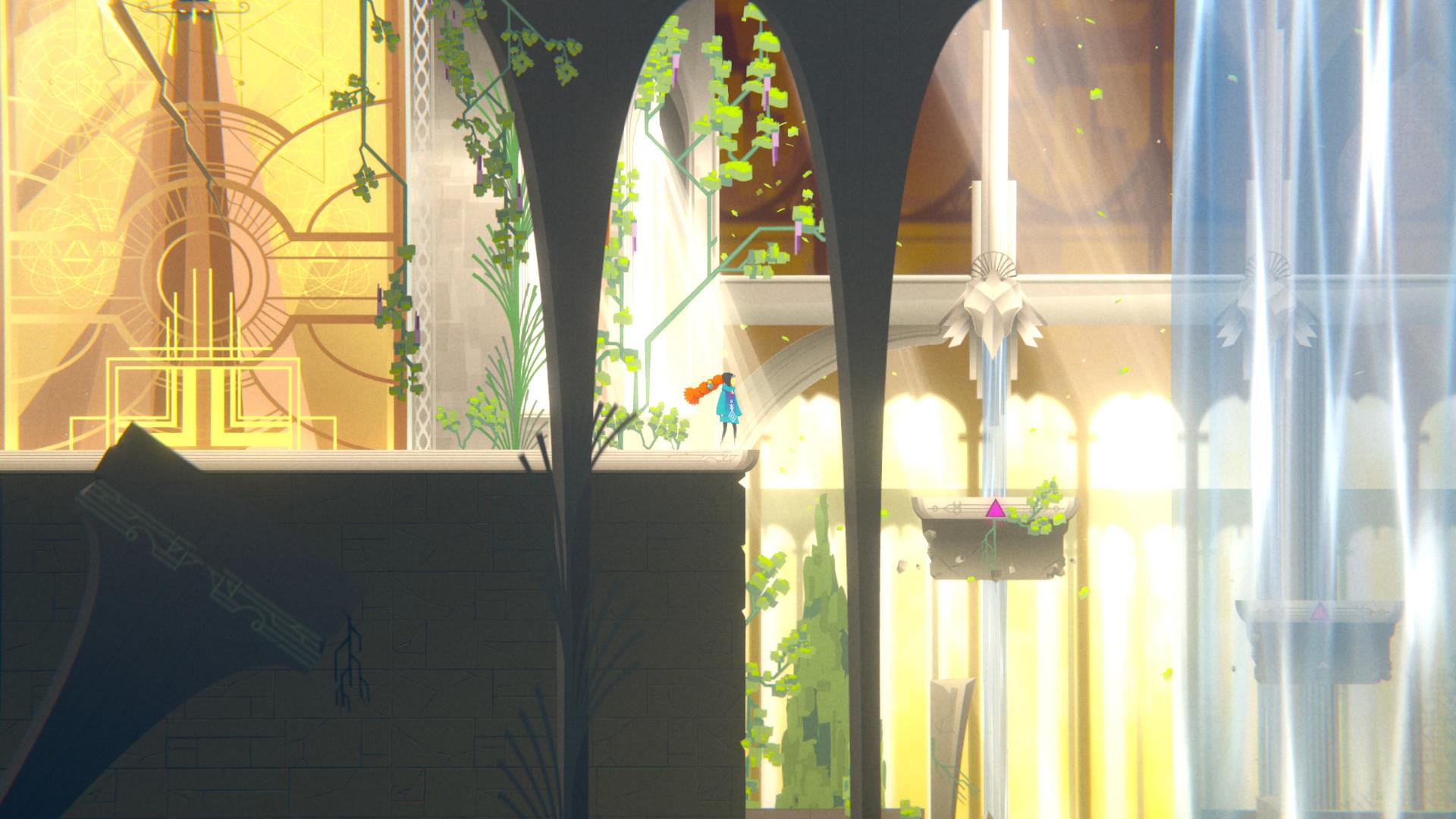 You play as Ina, a young girl who has been asleep inside of a tower for a long time. After waking up she has no recollection as to how she got to the tower, so she sets out in search of answers, meeting other inhabitants of the tower as she goes. Along her journey to escape the tower she collects memories of the others within the tower and gains new abilities from several spirits she comes across as she learns she has more power than she thought. As the game’s intro states, “this isn’t a story about how the girl was saved. This is the story about how she discovered she could be so much more.”

Aspire: Ina’s Tale is a puzzle-platformer where your goal is to escape the tower. You begin in the Heart of the Temple, learning the basics before moving onto the Dungeon. While there are a few places in the Heart of the Temple that had you moving blocks around, the Dungeon is where you gain access to the main mechanic of the game: spirits. You’ll come across a few different spirits throughout the Tower that give you a specific ability within that area such as placing a ball of light in a block to make it light up a certain radiance, make a platform move vertically or horizontally in the air, and make certain blocks increase in size. Once you obtain these spirits you’ll have to use them in their specific section of the Temple to solve the puzzles you come across. 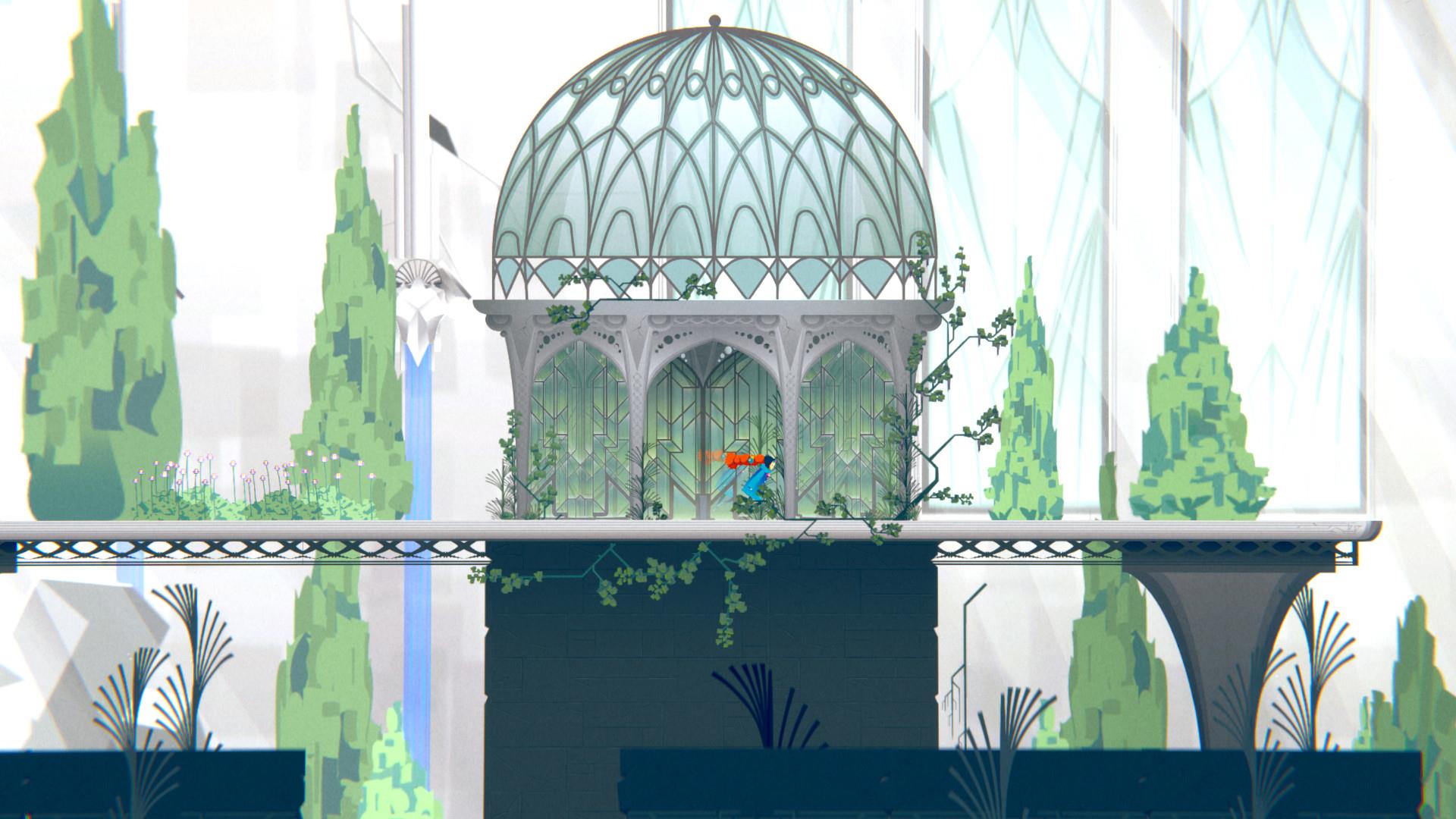 The puzzles themselves aren’t incredibly complicated to solve, but the solutions themselves can be interesting, even a bit tricky if you don’t think too far ahead. One example of this is early on when you get a spirit that lets you light up certain blocks and have them emit a radiance of light. You can move those blocks near switches to open gates, but you might have to grab a smaller light to chain these blocks of light together, covering a wider range of the area you’re in. Another room has you lifting platforms into the air, but they don’t quite reach the room’s exit, but you can pull a lever to move a platform left or right, so when a vertical platform comes back down, it’ll stop on the horizontal platform. Now you can make it rise higher. Again none of the puzzles are incredibly complicated, but do require some forward thinking.

There aren’t many enemies in the game. Early on you’ll have some sort of wolf-like creature that’ll kill you if it catches you (each room tends to have a checkpoint at the start so if you die you won’t lose much progress) and you have to either out-run it or find a clever way to block off its progress somehow. The other enemy you fight is more towards the end of the game so I won’t spoil that for you. There are also pits that you can fall into and die, but as stated you don’t lose much progress, so you have plenty of freedom to experiment with the different rooms and puzzles to see what works and what doesn’t. I’m pretty sure there were one or two rooms that I either solved in a way that wasn’t intended, or I almost did and then finally found what I was supposed to do. Or I would just completely overthink something really simple.

In terms of aesthetics Aspire: Ina’s Tale is a beautiful game. The graphics look nice and the soundtrack is pleasant to listen to. In terms of controls the game is pretty smooth, though there is a bit of a learning curve for how Ina turns. Basically if you just tap the opposite direction you’re facing Ina just takes a small step back instead of turning around. It’s not much, but it can throw you off a bit if you just want to turn around to jump up to a ledge or rope.

However, there is one thing I want prospective players to be aware of when it comes to the game: it’s length. Going through the game for the first time took me roughly three hours, and that was with a few of the puzzles making me scratch my head for a bit. 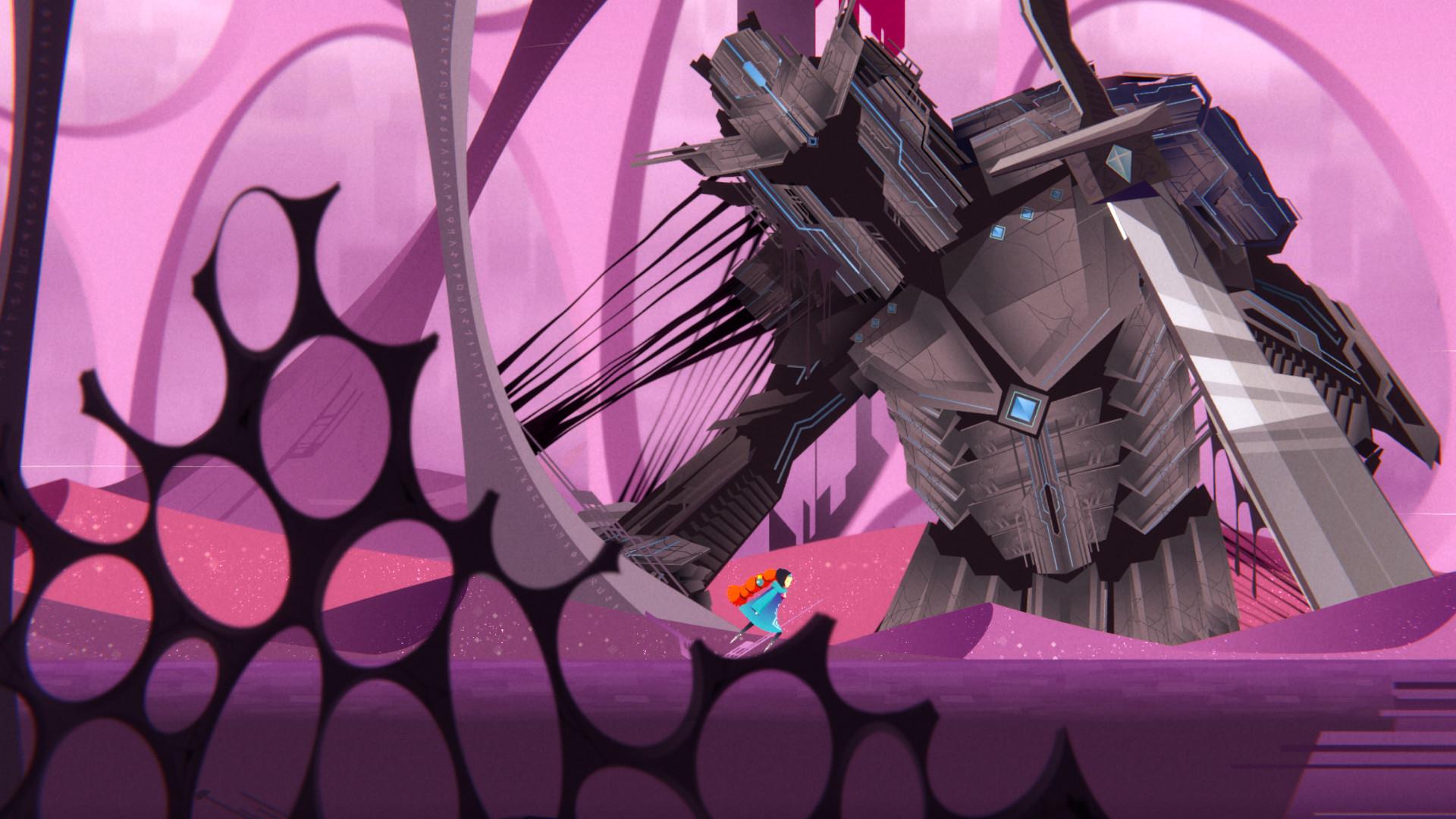 Again though, this isn’t necessarily a bad thing. Some games, even more recent titles, can still be good while being a bit on the shorter side if they’re engaging. As Ina makes her way through the tower you learn more about not only the tower and its inhabitants, but about Ina as well, gaining more power with the spirits she finds until she has one final confrontation where she must use the powers of the spirits she found along her journey, learning that she is so much more than who she thinks she is. The deciding factor for each player is whether you think its worth it to play a game that can take you only a couple of hours on a first playthrough with not much replayability? 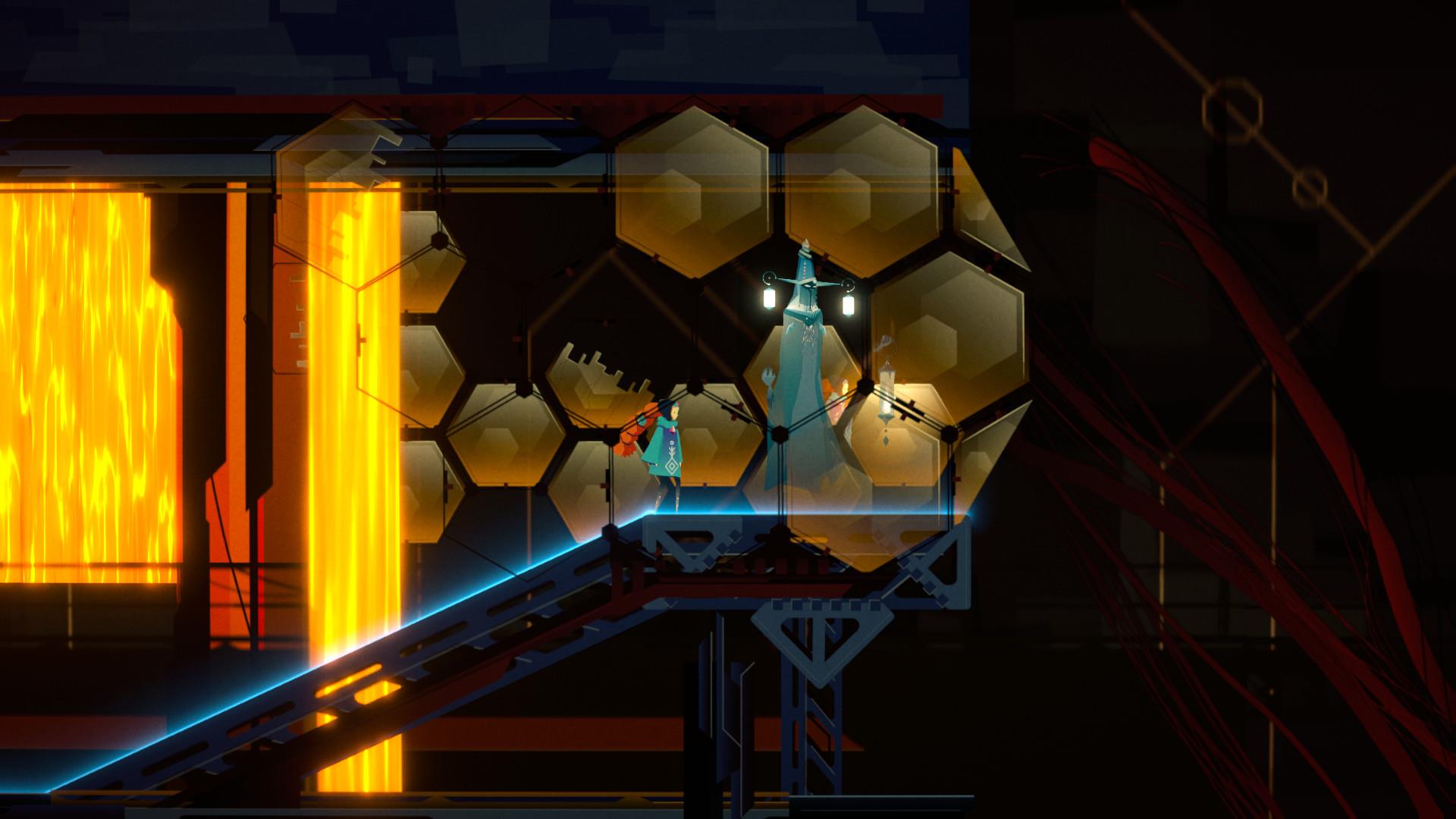 The answer for me is…kind of. Platformers and puzzle games are two of my favorite genres, and I’m always up for a game that combines the two. I enjoyed my time with Aspire: Ina’s Tale but it did feel like it was over kind of quickly. I won’t spoil anything for those wanting to check it out for themselves, but the final encounter where you put everything you’ve gained along your journey to one final test, combining the different spirits to finally escape the tower, is really engaging and can be quite the challenge. Everything before that though does feel like it goes by too quickly. That being said though, while I would have liked to have seen more areas to explore or maybe a couple more spirits to find and acquire, what we got was really well done; it just felt kind of short. If you’re up for a relaxing platform-puzzler with a great story and atmosphere and don’t mind the short length, Aspire: Ina’s Tale is worth checking out.

Aspire: Ina’s Tale is an enjoyable platform-puzzler with a great story and a relaxing atmosphere, but it’s one drawback is its short length.  If you know what you’re doing or are pretty good at solving puzzles that involve platforming, the game should only take you a few hours to complete.  If you don’t mind that though, Aspire: Ina’s Tale has a great story and a relaxing atmosphere that’s worth checking out.