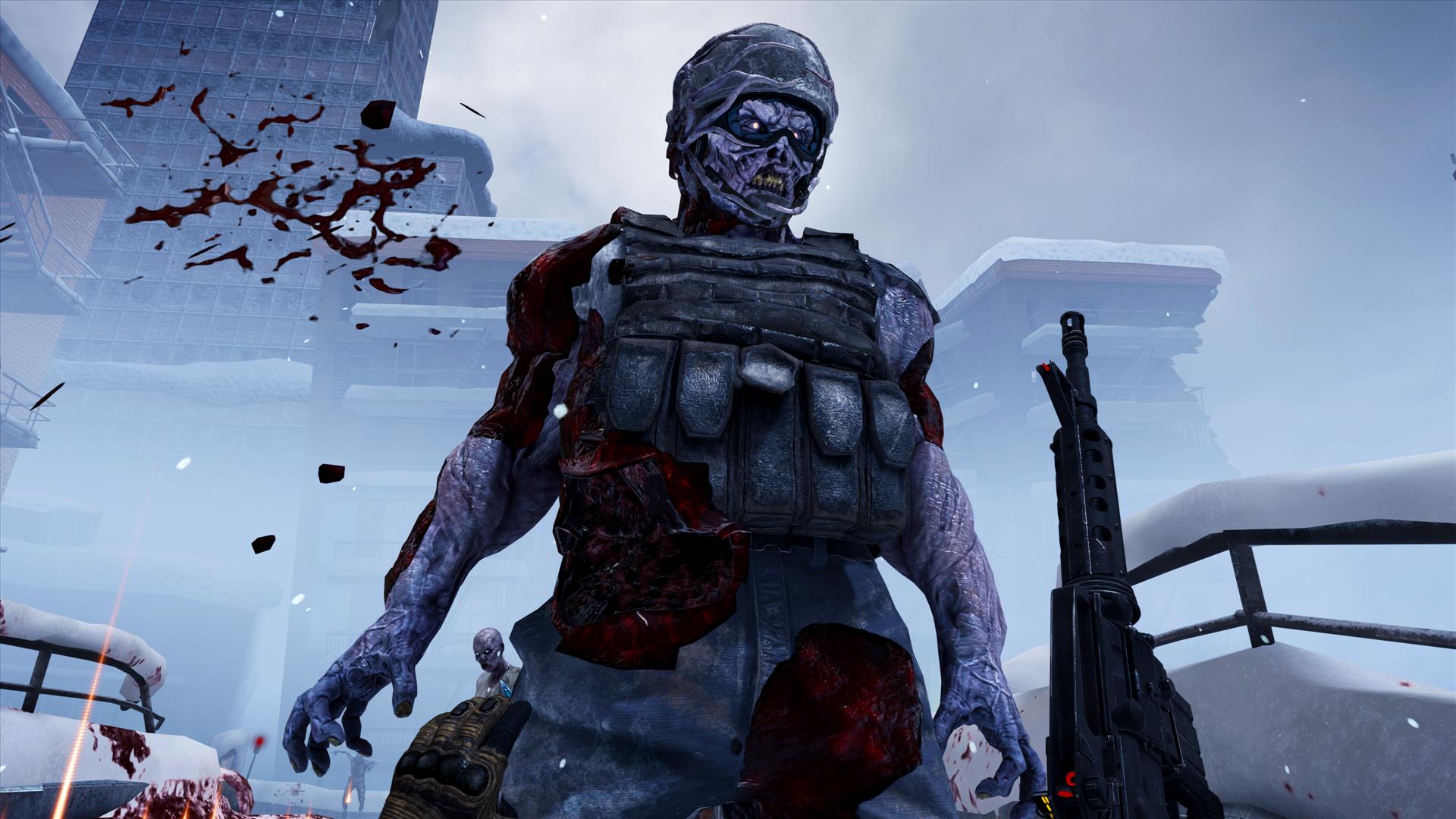 “All right, look,” the kid says, peering over a ledge. “When we jump down there, they are going to swarm on us. Don’t freak out. Just keep moving, and don’t let them pile up on you. There are a few ammo crates down there, so if you get low, don’t forget to fill up.”

The kids sounds like he is about eight years old.

“Are there any bosses?” asks a guy who sounds like he is around fifty. He is nervous.

“Yeah,” the kid says. “At the end, when we get through most of the little guys, a boss shows up. Different areas of his armor will glow. Just shoot him in the glowy parts, and don’t let him grab you.”

“What happens if he grabs you?” the nervous guy asks. 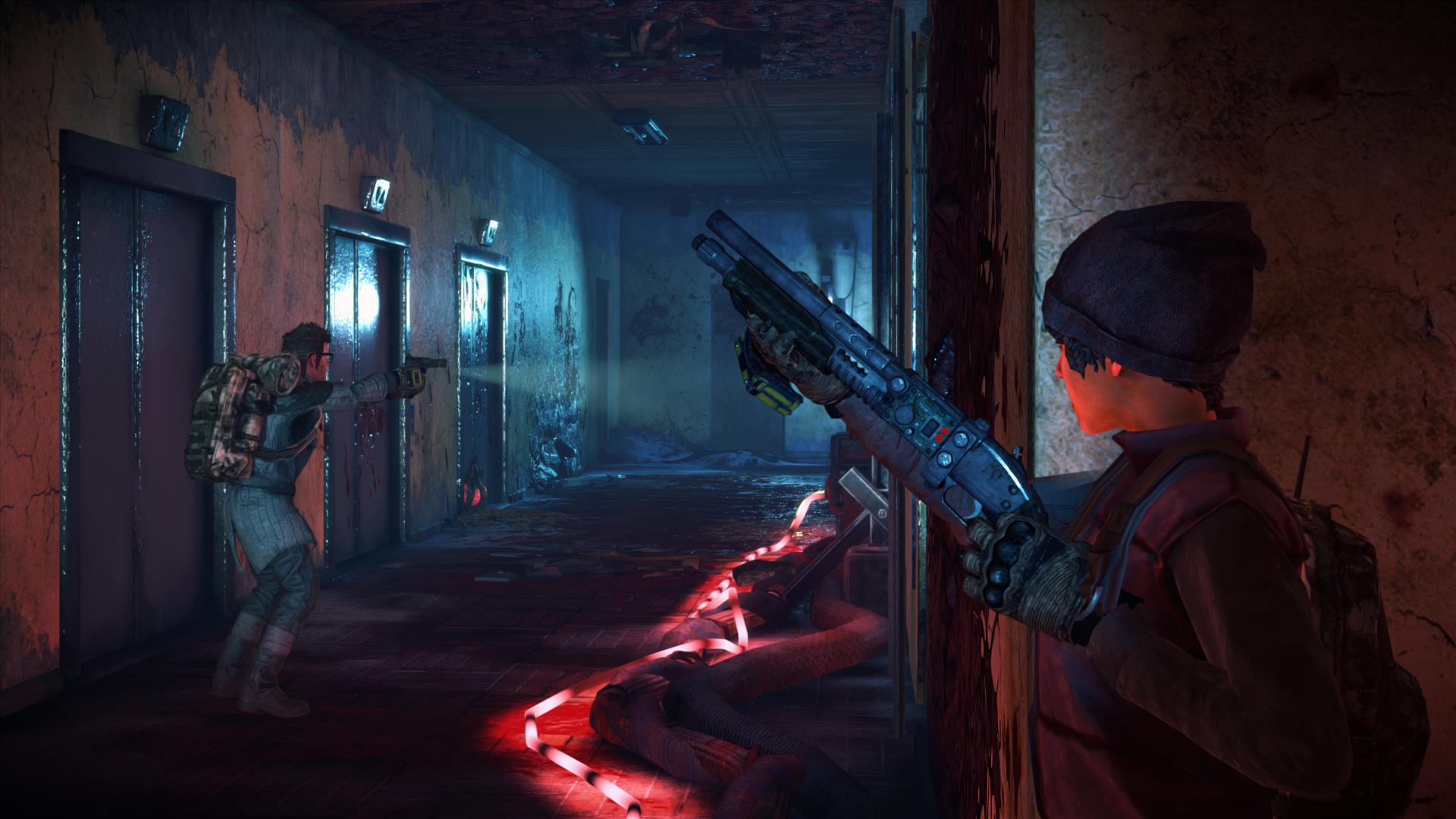 We jump down into the open courtyard, and things play out exactly as the kid said they would. I have no problem keeping away from the boss. I’m using the teleport locomotion option, so I’m relying on skills that I honed in DOOM VR, teleporting out of danger and whipping around to unload both of my weapons on the bad guys. I’m dual-wielding a pistol and an AK, taking short, controlled shots with the AK to keep the recoil under control. It’s not the best, but I can’t figure out how to put my pistol down.

And that’s how a little kid walked me and three other adults through the entire campaign of After the Fall. The game had been out for a couple of days, and this kid absolutely knew the game inside out. He was confident and assured, and was a pretty damn good game guide.

Of course, it only took a couple of hours for him to shepherd me and the other adults through the entire game. The kid said that this was his fifth or sixth time through most of the levels. After a couple of days, he was already an expert. If there is one major gripe that most players seem to have with After the Fall, it’s that the game is short. Really short. 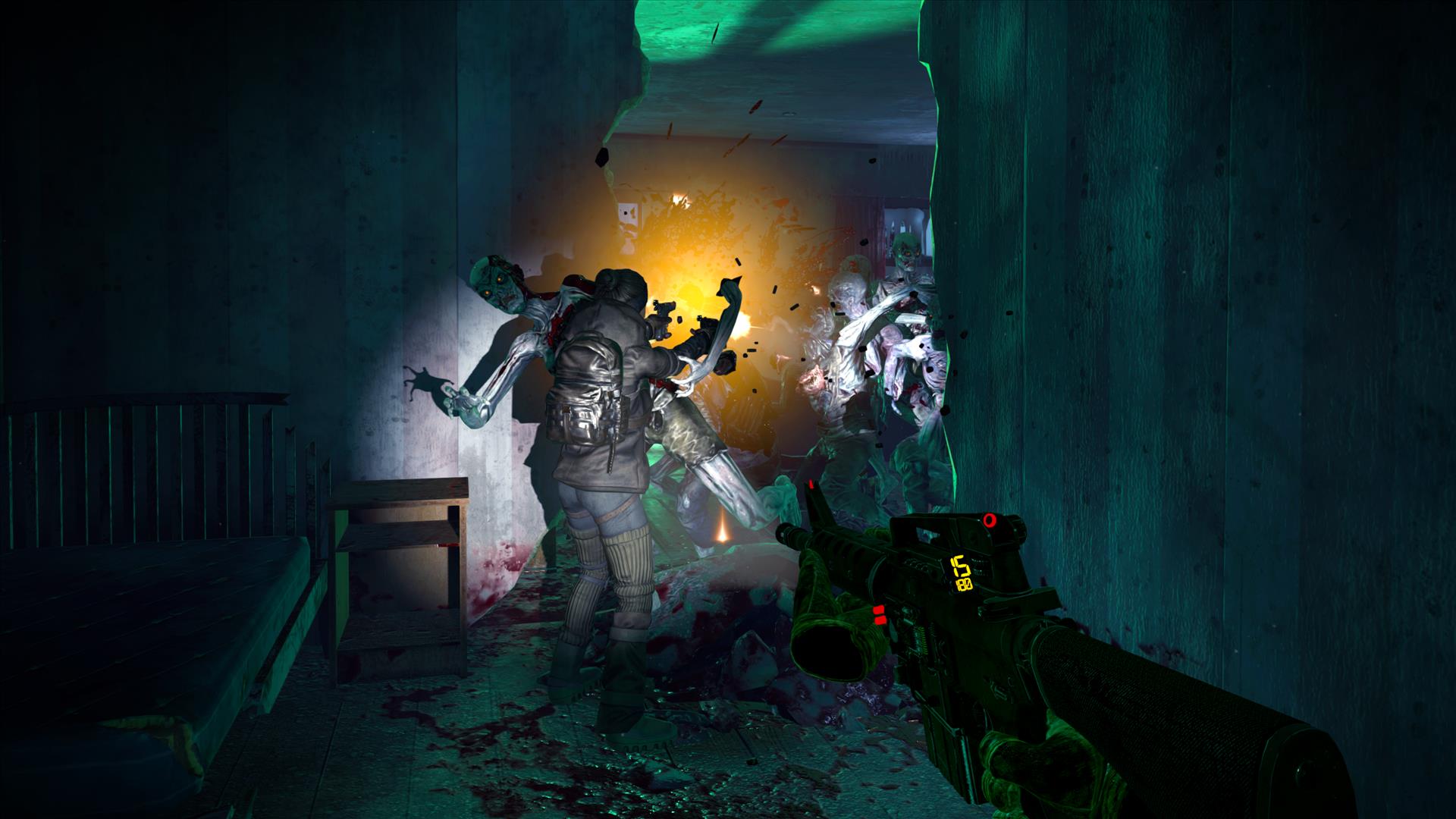 There are only five “levels” in After the Fall, and each of them takes about twenty minutes to get through (thirty if you are pokey and thorough). You can blast through the entire game in one sitting, especially if you find a friendly little kid to walk you through. I’ve been through the game twice now, once with the kid and once playing by myself with a team of bots – which allowed me the space to freely explore without the pressure of keeping things moving forward for a team of real players.

After the Fall is a four-player cooperative shooter, much in line with games like Left 4 Dead or Back 4 Blood, but played fully in VR. The real achievement here is that After the Fall has full cross-platform capabilities, which means that you can play with your friends whether they are on Quest 2, PSVR, or any of the myriad PC VR rigs. That means that despite the more limited graphical capabilities of some systems, developer Vertigo Games was able to cram the entire game onto the more modest VR consoles. I played on a Quest 2, and though the game looked a little muddy in places, I was shocked by how many enemies could appear on-screen at once - and they explode really well. 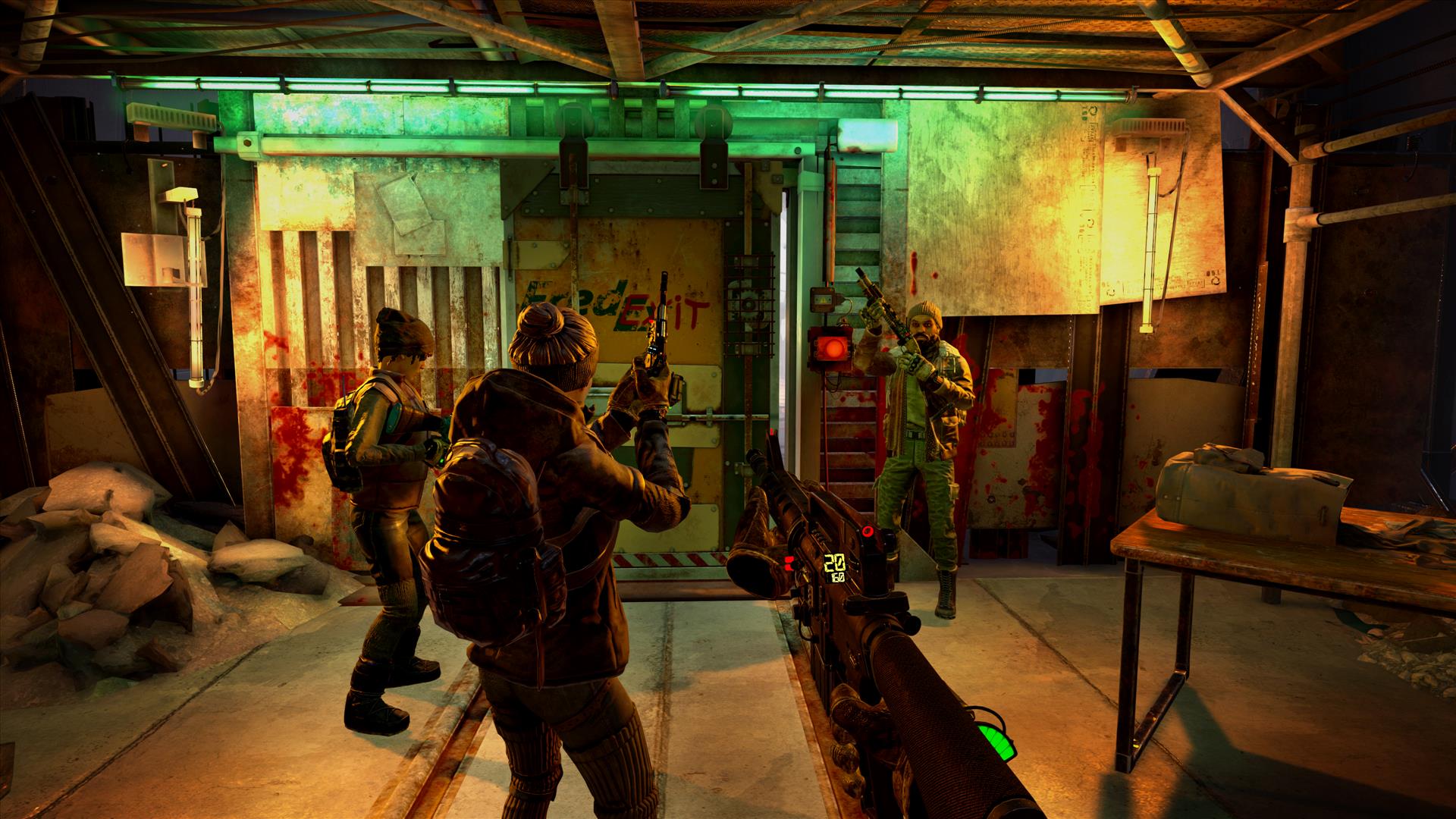 The game’s levels are well designed, but don’t pack a lot of surprises if you’ve played this sort of game before. Guys run up behind you when you would expect them to, and if you think that there will be zombies waiting around the next corner, well, there probably will be. After the Fall likes locking players into little enclosed areas, and then tasking them with cleaning that area out before moving on. It’s a heavily repeated mechanic, but it does work to increase the tension. Though most games of this type try to place players into to bodies of "characters", most of the folks running through the game just seem to be random "survivor" types, with no special abilities or specialties. What you look like is totally random, so no need to put any thought into it - or into building up any of your guys.

Each level comes complete with a couple of safe rooms, where players can stock up on ammo and healing items. These offer a welcome respite from the action, and give new players a place to catch their breath and ask questions of the eight-year-old guiding them. The “freak out – rest – freak out - rest” cadence works pretty well to keep players engaged in between bouts of fighting for their lives.

After the Fall works best if you think of it as “Left 4 Dead Lite but in VR”. Don’t go into this one expecting a huge variety of baddies – there are only four major boss types beyond your garden variety zombies, and raising the difficulty on the game only serves to make them spongier. Instead of zombies, you get zombies in ice armor. The levels remain primarily the same from run to run, with slight variations on enemy and item placement. 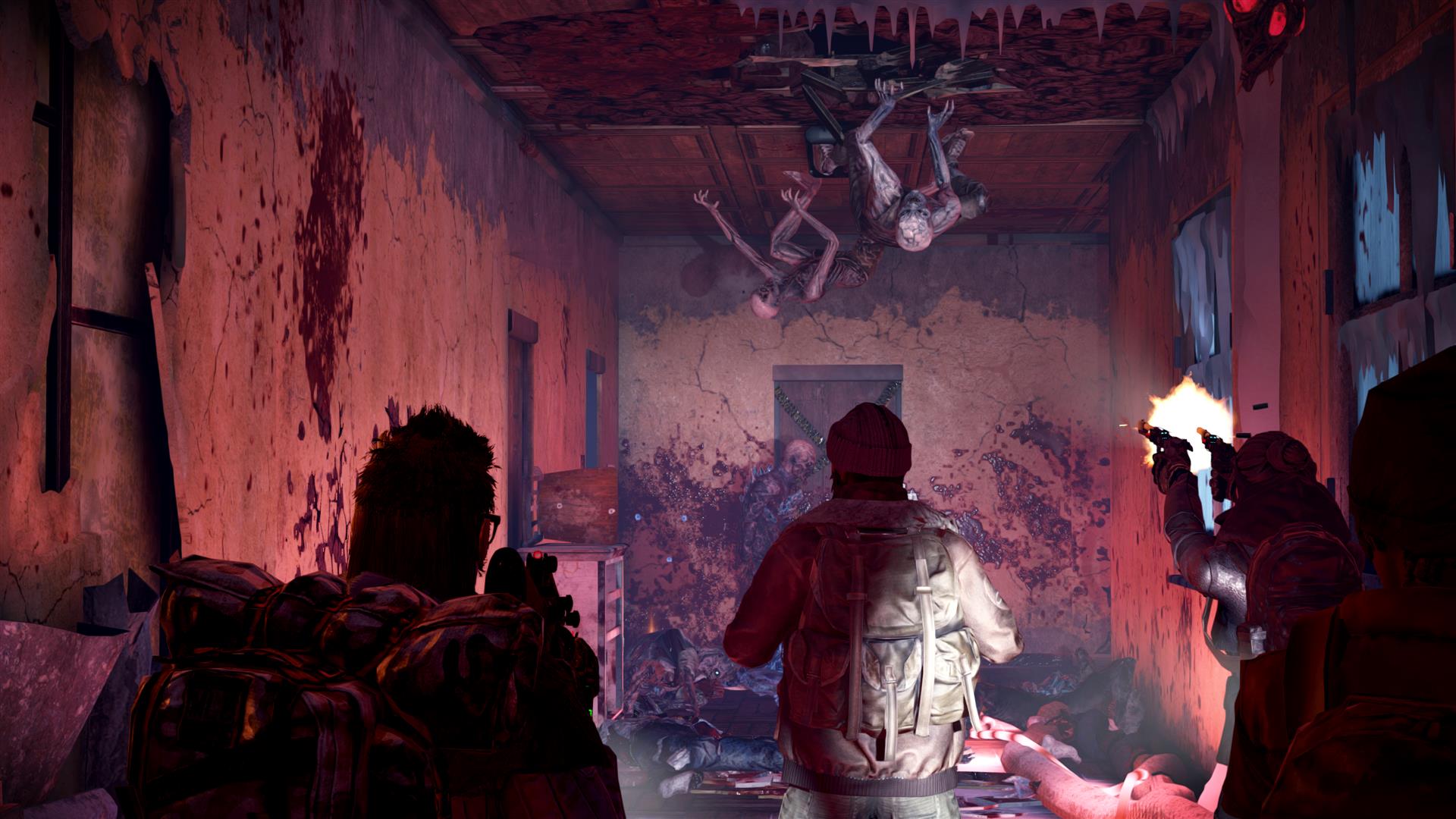 That doesn’t mean that the game isn’t a ton of fun with other players, it just means that once you’ve seen it and been through it a few times, you likely won’t return for another look until developer Vertigo Games gets a little further into its promised roadmap. There aren’t a lot of reasons to keep running these maps, as the progression system is based entirely around the fiddly weapon upgrades – which is an okay motivation, I guess, but not exactly earth-shattering.

Gathering resources from downed baddies and finding hidden floppy discs in levels allows you to unlock new guns back at base, but when the guns you find laying around work just fine, there isn’t much driving you to push on. If you engage in the mechanic that allows you to upgrade your weapons, increasing the difficulty is pretty much a wash. I should also mention that I’m normally a guy that like to play games on “Easy”, but the easiest setting in After the Fall was too easy, even for me. Crank it up one if you want any sort of challenge at all. 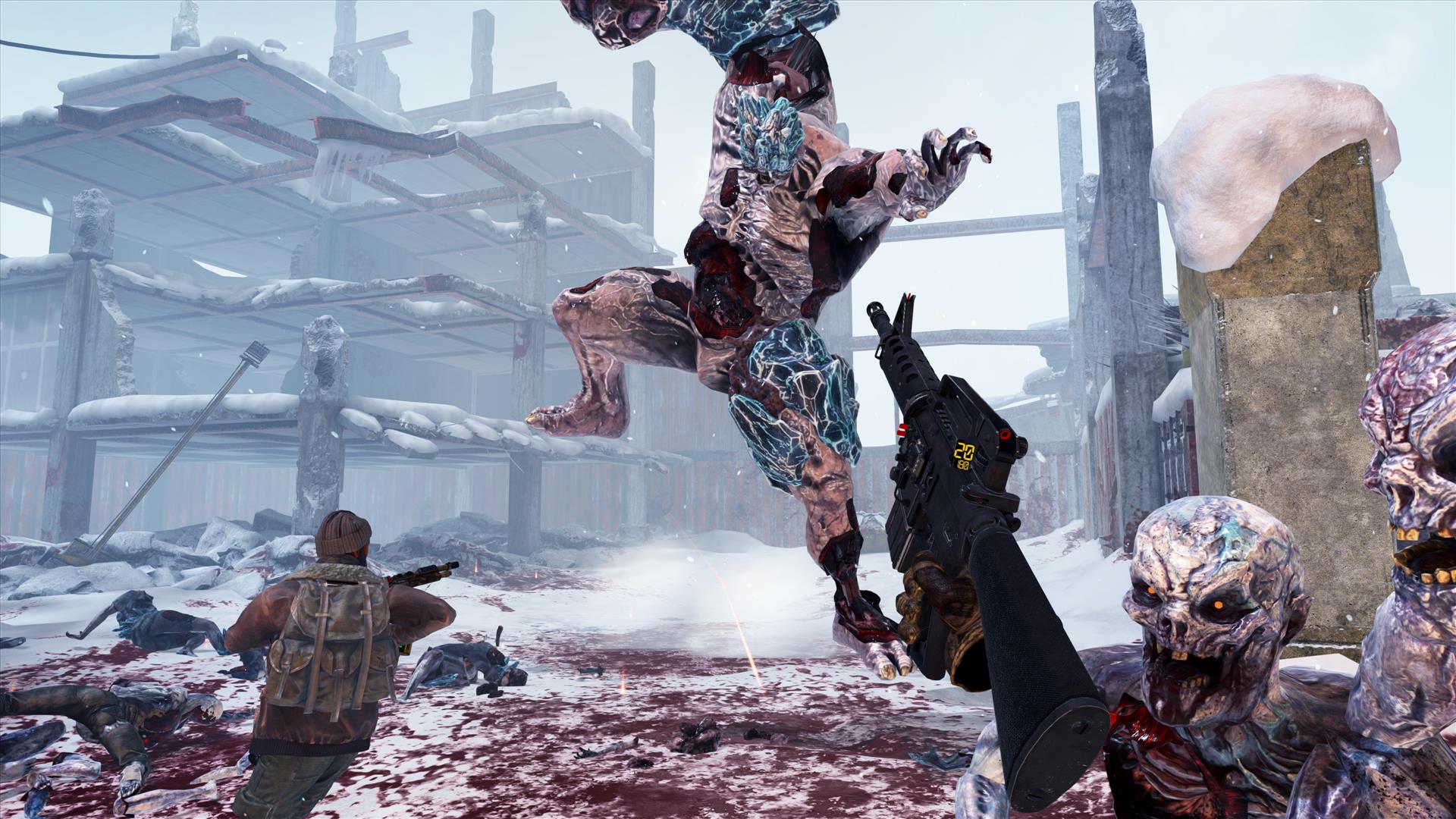 Beyond the repetitive (but again, fun) levels, my only other grievance with After the Fall is the sometimes-finicky UI. The player has two storage slots for stuff they find out in the wild, which feels like not nearly enough. And I still haven’t figured out how to put weapons down or away, which led to my aforementioned AK dual-wielding situation. The UI for upgrading your guns is also a little rough, tasking players with manually removing and adding parts to their weapons. I know its VR and everything, but I would like at least the option to upgrade my guns with a menu. I end up dropping stuff all over the floor, and mixing up the new and old parts.

But the vast majority of After the Fall works like a charm – there is more here that succeeds than does not, which is saying a lot for a game of this complexity. The shooting feels great, the baddies swarm appropriately, and everyone screams hysterically when things start to go wrong. While the ride is short, it is still entertaining, and there is more promised content on the horizon. The future is pretty grim for the survivors in After the Fall, but for players, things are looking up.

After the Fall works best when four players are working together against hordes of swarming baddies. The shrieks and gun shots are exactly where you want them to be. But the game is held back some by a limited number of levels and some fiddly UI design. Still absolutely worth a look, but with the understanding that some refinements and more content are still on the way.