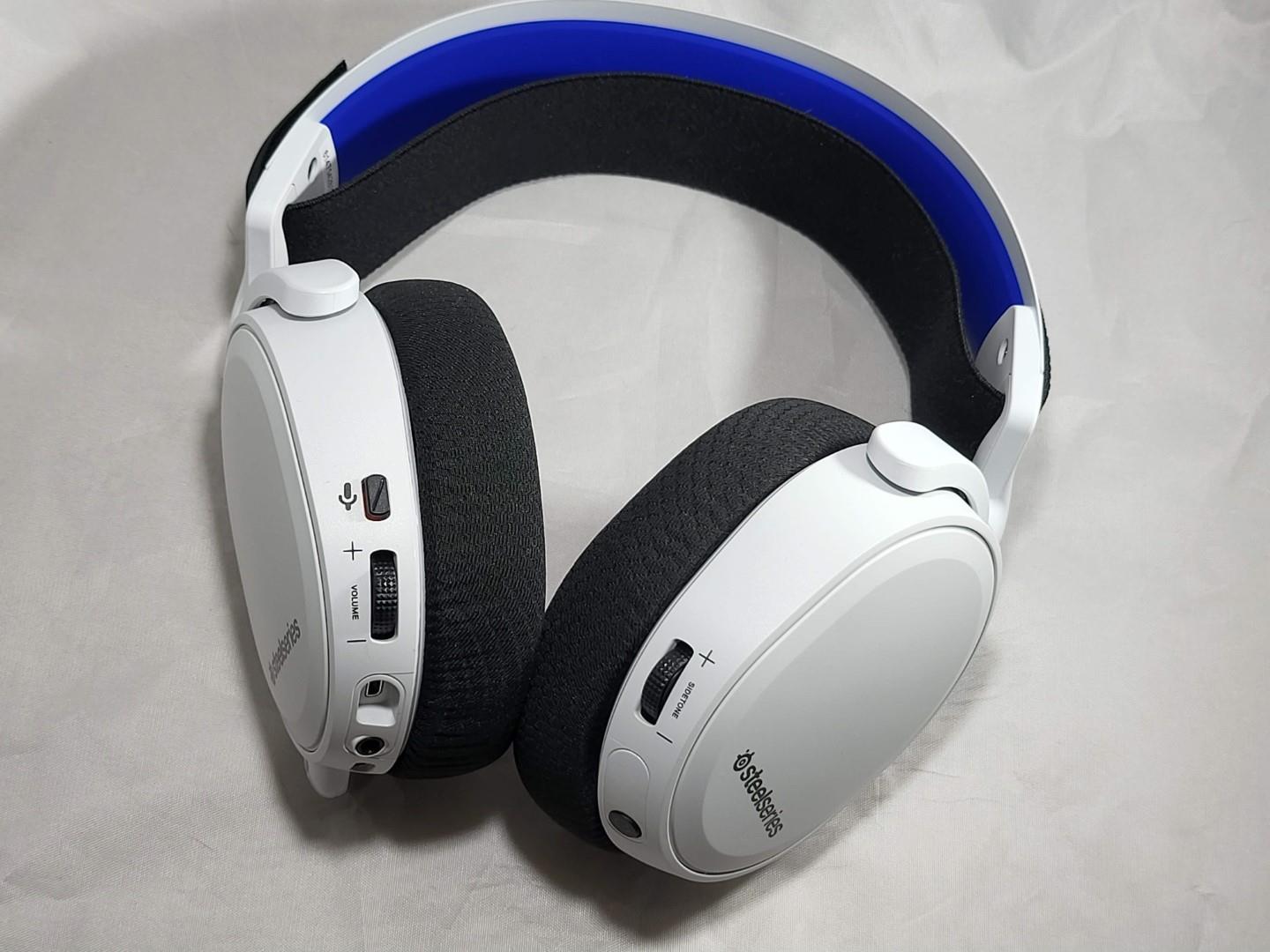 It’s been a while since we’ve looked at SteelSeries headphones, but they’ve always been solid choices for gamers in need of a good headset. A few weeks ago, SteelSeries announced the Arctis 7+ and 7P+ and they were kind enough to send along an Arctis 7P+ for review. Is it a good performing wireless headset?

The SteelSeries Arctis 7P+ headset comes in both black and white. The one we have today is white, which matches the PlayStation 5. SteelSeries touts it as designed for the PlayStation 5, but you can use it with the PC, Switch, PlayStation 4, and tablets wirelessly. For the Xbox line of consoles, you can use the included wire to plug it into the controller, but it won’t be completely wireless like the other setups.

If you have the previous Arctis 7P, you can pretty much skip this review. The update includes improved battery life and USB-C for charging. The rest is the same, so for those who own the previous version, it won’t be an upgrade for you unless you want those two features. If it’s working fine for you right now, you’re golden. For the rest of us who haven’t used the Arctis 7P before, here’s what it has.

You have 40mm neodymium drivers with a frequency response range of 20 to 20000 Hz. They are enclosed in some memory foam pads that are covered in a soft cloth that are comfortable over the ear. If there’s one complaint I have about the ear cups is that they aren’t deep enough. For my ears, they were fine, but I can see people with larger ears than mine having the depth of the ear cups hinder the comfort of them.

On the right side is the power button and a dial to adjust how much sidetone you can hear. I’m glad SteelSeries decided to add a sidetone adjustment, as I reviewed a few headsets that didn’t let you adjust the amount of sidetone either on the headset or in software. With this physical dial, you can make it so you can hear yourself loud and clear, not at all, or steps in between.

Most of the controls and inputs are on the left earcup, including the USB-C connector for charging. The 3.5mm jack is only used for sharing audio where you can daisy chain other headsets to it. SteelSeries is unfortunately sticking to their proprietary connector for connecting to an analog 3.5mm source such as a phone or computer. I would’ve liked to have seen SteelSeries use a standard 3.5mm jack for this, but at least you can easily get replacement cables from them should yours become damaged and unusable. There’s also a volume dial here to easily adjust how loud the headset is and a quick mic mute button. 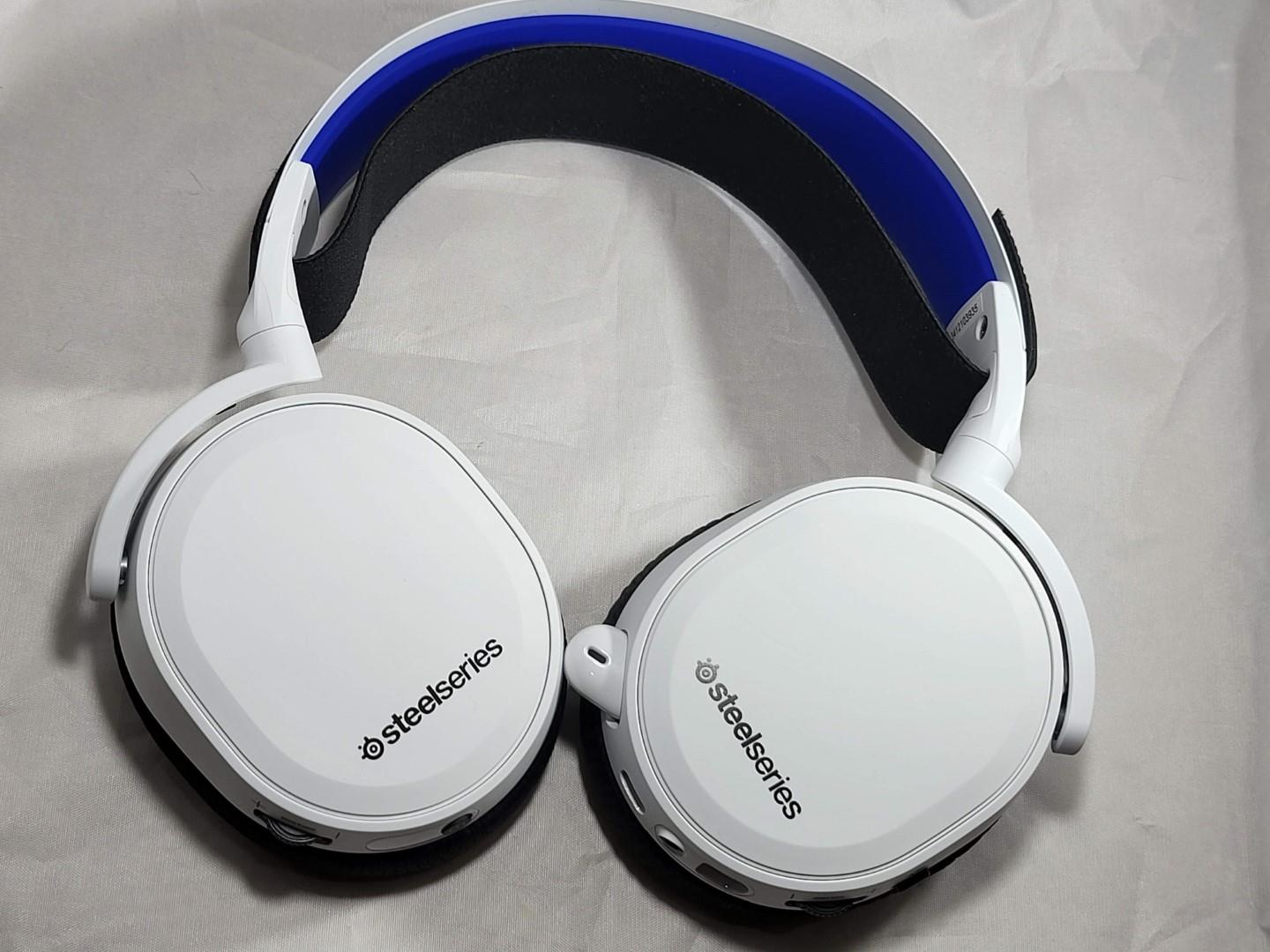 One of my favorite features of the SteelSeries line is their retractable microphone. On the Arctis 7P+ it’s housed in the left ear cup. With a nice satisfying pull, you can extend the mic and position it easily. There’s a nice little red light on the end to let you know if your headset is muted. You can’t see it though with the mic fully retracted, but I’m one that appreciates any visual indicator of whether you’re able to talk or not.

SteelSeries uses what they call a ski goggle band style that makes it pretty comfortable when it sits on top of your head. The band adjusts easily by undoing the Velcro and pulling it where you need it to be. I’ve always liked how it lets the headset sit on top of the head with a band that conforms to your head making it feel like it’s almost floating. If you’re one of those that like to personalize their peripherals, there are some colorful band replacements that you can pick up to make it more appealing to you.

On top is a very solid wide metal frame that’s firm but a little bit flexible. The points where they connect to the earcups aren’t metal though so if there’s a weak point this area would be it. The earcups can rotate 90 degrees flat to place on a table or against your shoulders. The rotating mechanism and ear cup connection area to the frame is hard plastic but it does seem pretty thick all around. 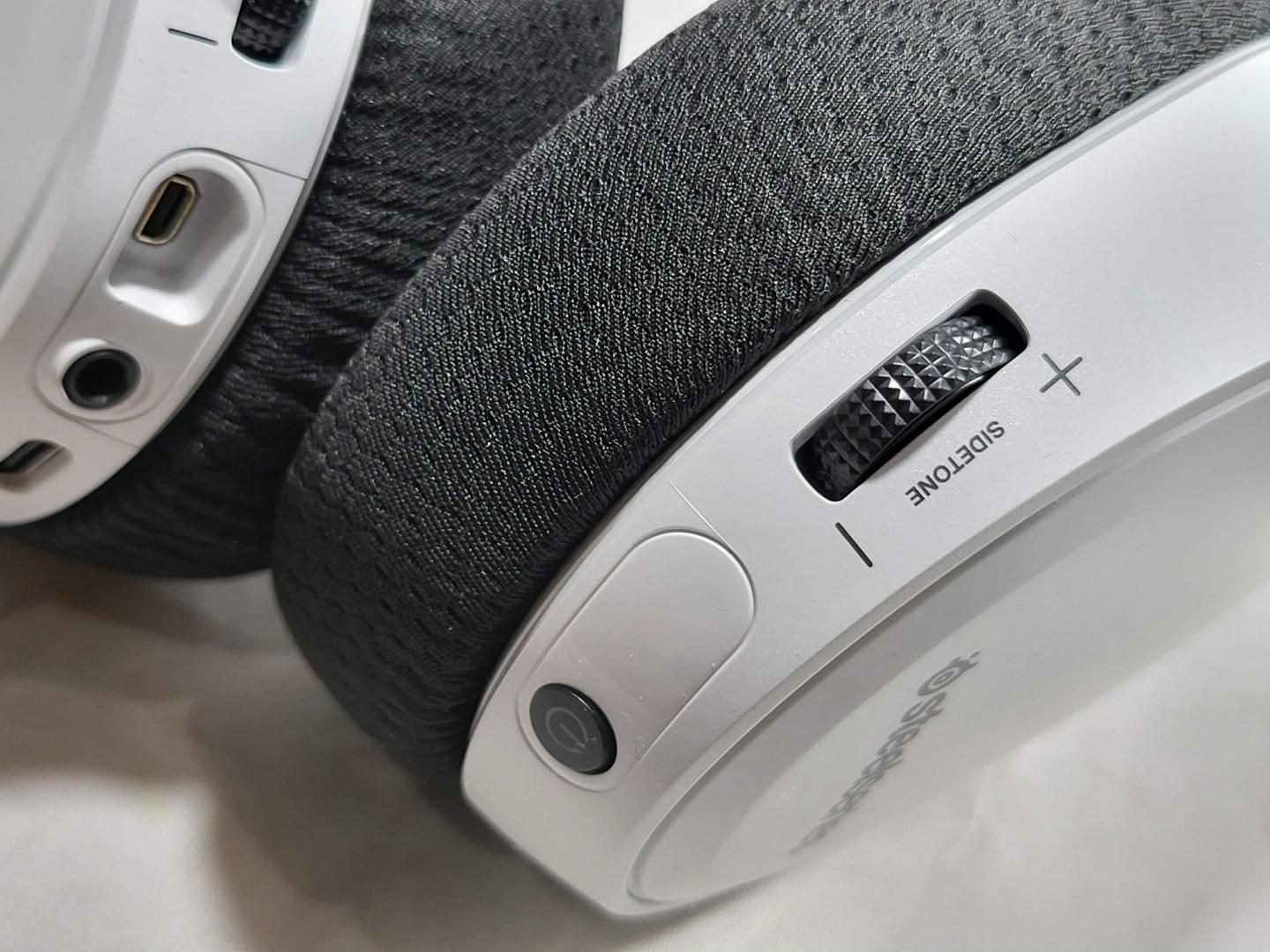 Wireless connectivity is achieved via 2.4GHz wireless band via the USB-C dongle. The dongle is a bit wide though and will cover the secondary USB connector on the front of the PlayStation 5. Luckily, you can use the included USB-C to USB-A extender cable if you want to keep it out of the way, which is what I suggest so as to not block the other USB port. I was able to use the dongle on my PC without any issues as well.

SteelSeries has an app that will do firmware updates and EQ adjustments for the Arctis 7P+. You can adjust the sound to your preference and have it saved to the headset for use on other systems. Only one preset can be saved though so if you want to change it up, you’ll have to reconnect the dongle to the computer to save a different preset to the unit. I would’ve liked a way to have multiple presets saved to the headset with a way to flip through them like a few of the other headsets I have, but if you don’t do changes to presets like me, this won’t be an issue.

Sound wise, the SteelSeries Arctis 7P+ is really, really good. It’s well balanced with solid mids and highs and a good but not overpowering bass. Listening to music, mids and highs such as voices, hi-hats, cymbals, and the likes were clear and pleasant sounding. Turning to more bass heavy music, I liked the punch that the drivers delivered while not drowning out the rest of the music.

Moving to video games, the SteelSeries Arctis 7P+ delivered great gaming sound that should please many gamers out there. With the emphasis on it being a PlayStation 5 headset, I popped the dongle into my PlayStation 5 and played a few of the titles I owned. The sound was very, very good as well and the 3D sound of the PlayStation 5 delivered nice positional audio. I didn’t have the Sony Pulse 3D to compare it with, but I was able to discern where some of the sounds in the game were coming from - like the various robots doing their thing around me in Astro’s Playground and the crowd that walks around me in the streets in Miles Morales. 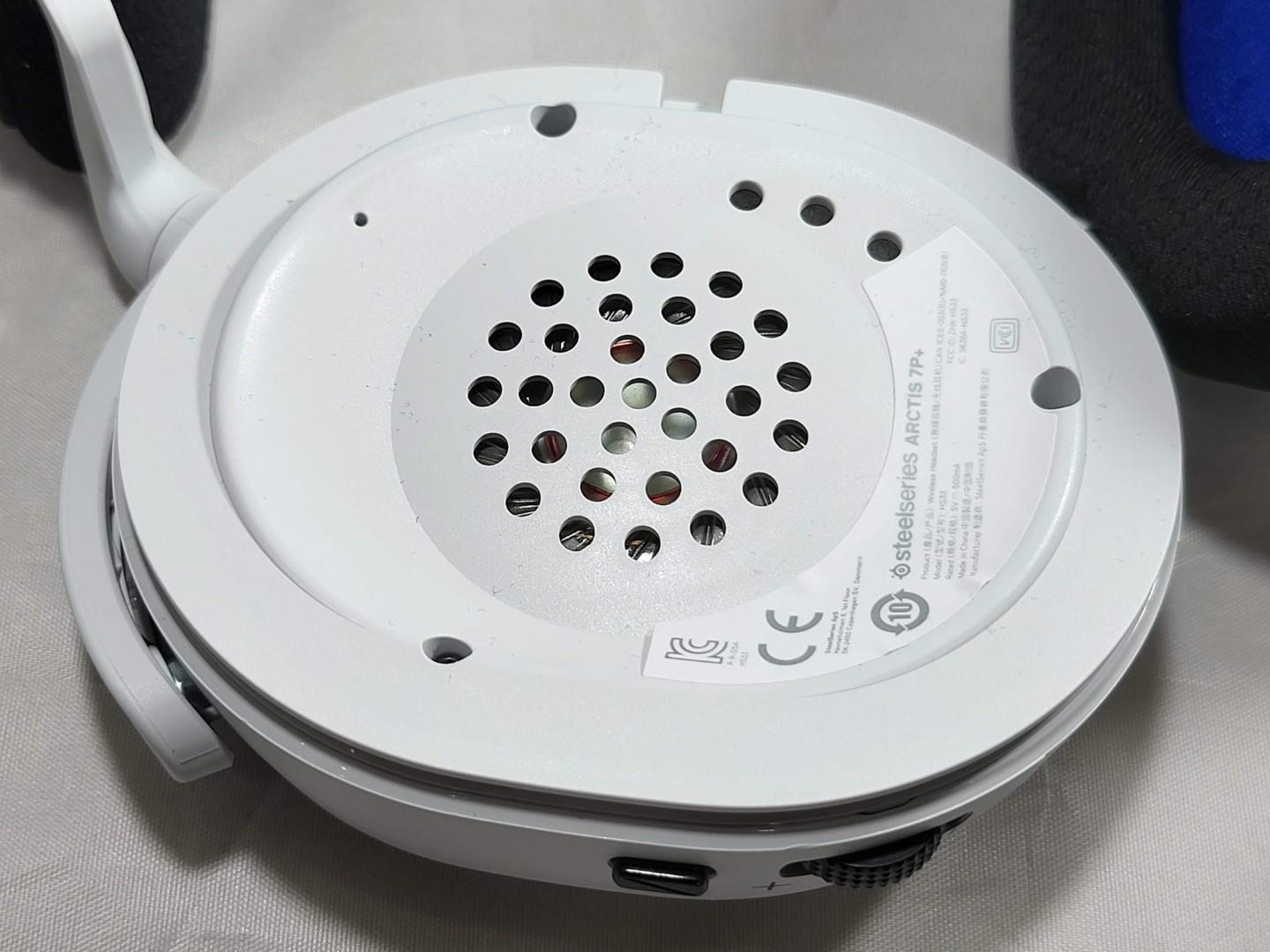 The one thing I didn’t like when connected to the PlayStation 5 was that even when you turn off the Arctis 7P+, it doesn’t change where the audio is piped to. So if you expect your TV or entertainment system to take over the sound once you turn off the Arctis 7P+, you’ll have to change it in the menu or just pull out the dongle. I don’t know if SteelSeries could upgrade the firmware to make it so if the headset isn’t connected to it wirelessly it changes the output of the audio, but this is my only complaint about the Arctis 7P+ on the PlayStation 5.

On the PC, it worked really well and it was what I used mostly with the Arctis 7P+. My PC is running Windows 11 and I was able to just plug the dongle in, switch to that audio device, and use it in both games and meetings.

Speaking of meetings, the mic on the Arctis 7P+ is really good as well. It features some noise reduction and while it sounded a little bit compressed, my colleagues said I was coming in pretty clear. What’s funny is that if you do use the side tone function, you’ll hear the background noise around you, but that won’t be transmitted through to your friends. It’s really weird at first because I thought they could hear my typing on my mechanical keyboard or the hum from my computer, but when I listened to a recording, none of that was heard.

The mic also does a good job at eliminating any popping sounds from your voice. Whether you’re breathing or saying words that would produce a pop, the mic on the Arctis 7P+ filtered all that out. And having it retract into the headset is a plus as it keeps it out of the way easily. It’s too bad it doesn’t mute itself when retracted though.

At around 30 hours of wireless operation, the Arctis 7P+ did last around that time before I had to do a recharge. The long battery life will be great for those who forget to charge or go through a few long sessions of gaming.

Overall, the SteelSeries Arctis 7P+ is not just a solid PlayStation 5 headset, it’s a solid headset overall. With the ability to use it on multiple devices and having solid sound and a good mic, as well as being very comfortable to wear, the Arctis 7P+ delivers the goods and overall is a great buy. There are just a few things I found that could be improved upon, but overall, I think SteelSeries has a good product here with the Arctis 7P+.

A few good updates to the original, the SteelSeries Arctis 7P+ outputs good sound, has a good mic, and it's really comfortable to wear.