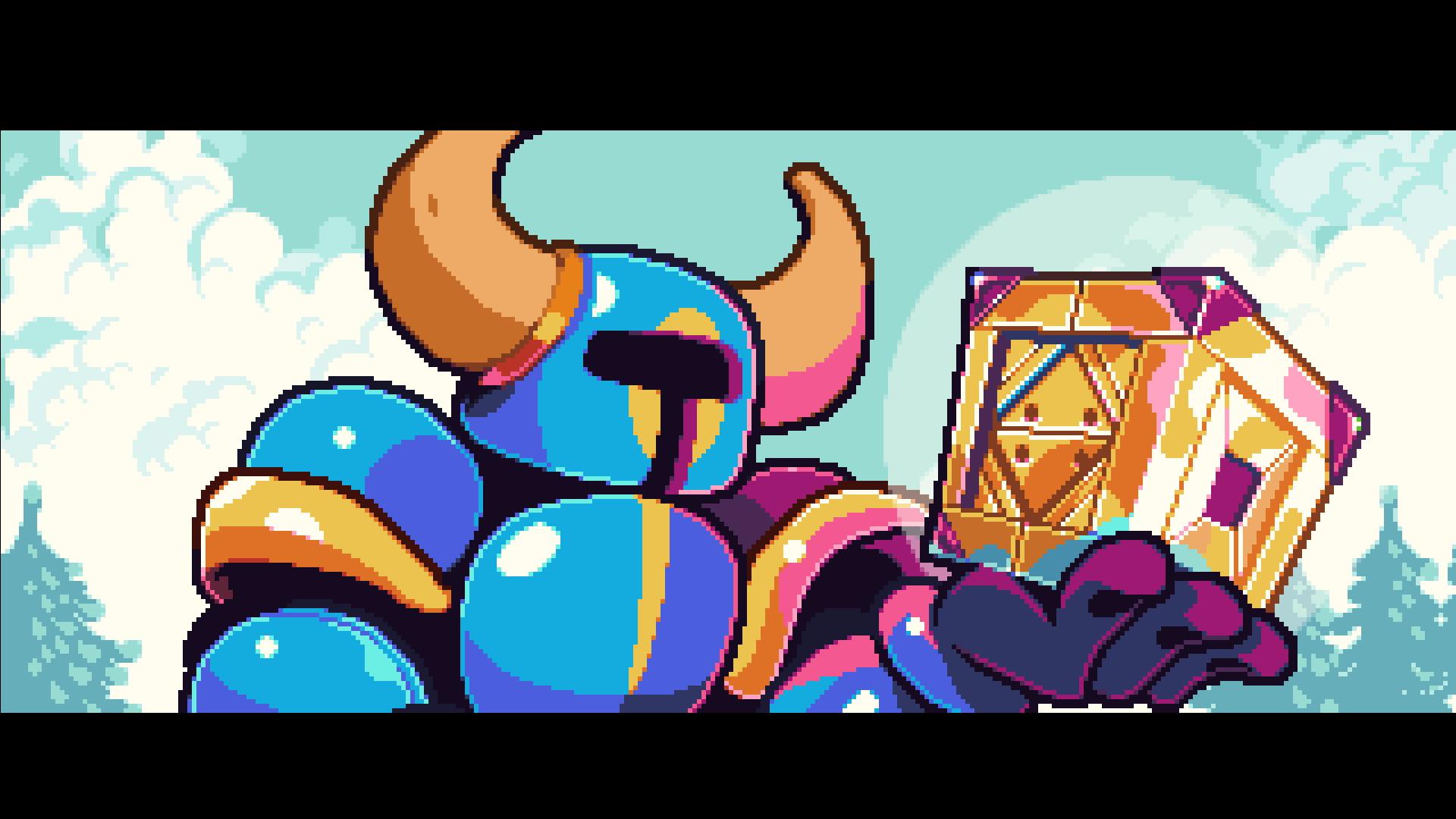 I’ve had a handful of puzzle games that have become cornerstones in my gaming life. Finding something that I feel I will go back to throughout my lifetime isn’t easy. But I think I’ve found another one. Shovel Knight Pocket Dungeon isn’t your average falling block puzzle game by any means. The combat/puzzle solving aspect is done in a way I haven’t seen and feel will become replicated by others very soon. On top of mechanics that feel perfect is a polish by Yacht Club Games that seals the deal. 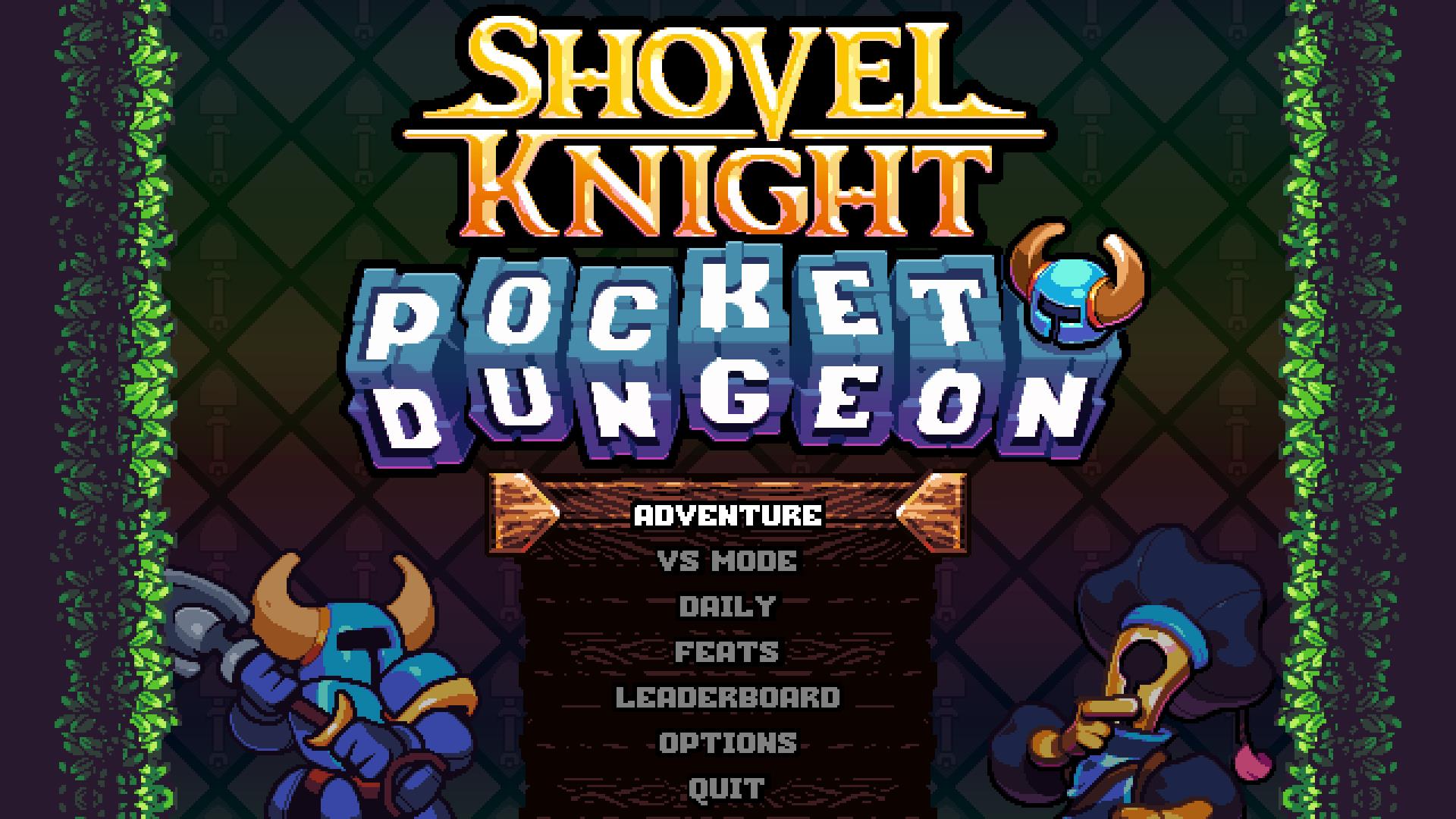 Like everyone, I’ve played puzzle games before. While this one might not look too different from the common styles seen in a lot of places, once you start playing you can detect the differences right away. I’ll admit that I was a bit skeptical at first with Pocket Dungeon. I’ve seen game after game that is nothing more than a popular franchise slapped with something like a match three style puzzler. I’ve also seen plenty of falling block style puzzles. Even when slapped onto a franchise that I care about, those games hold my attention for a session or two at best. I find myself moving on without giving them a second thought. The mechanics of Pocket Dungeon are something new entirely. 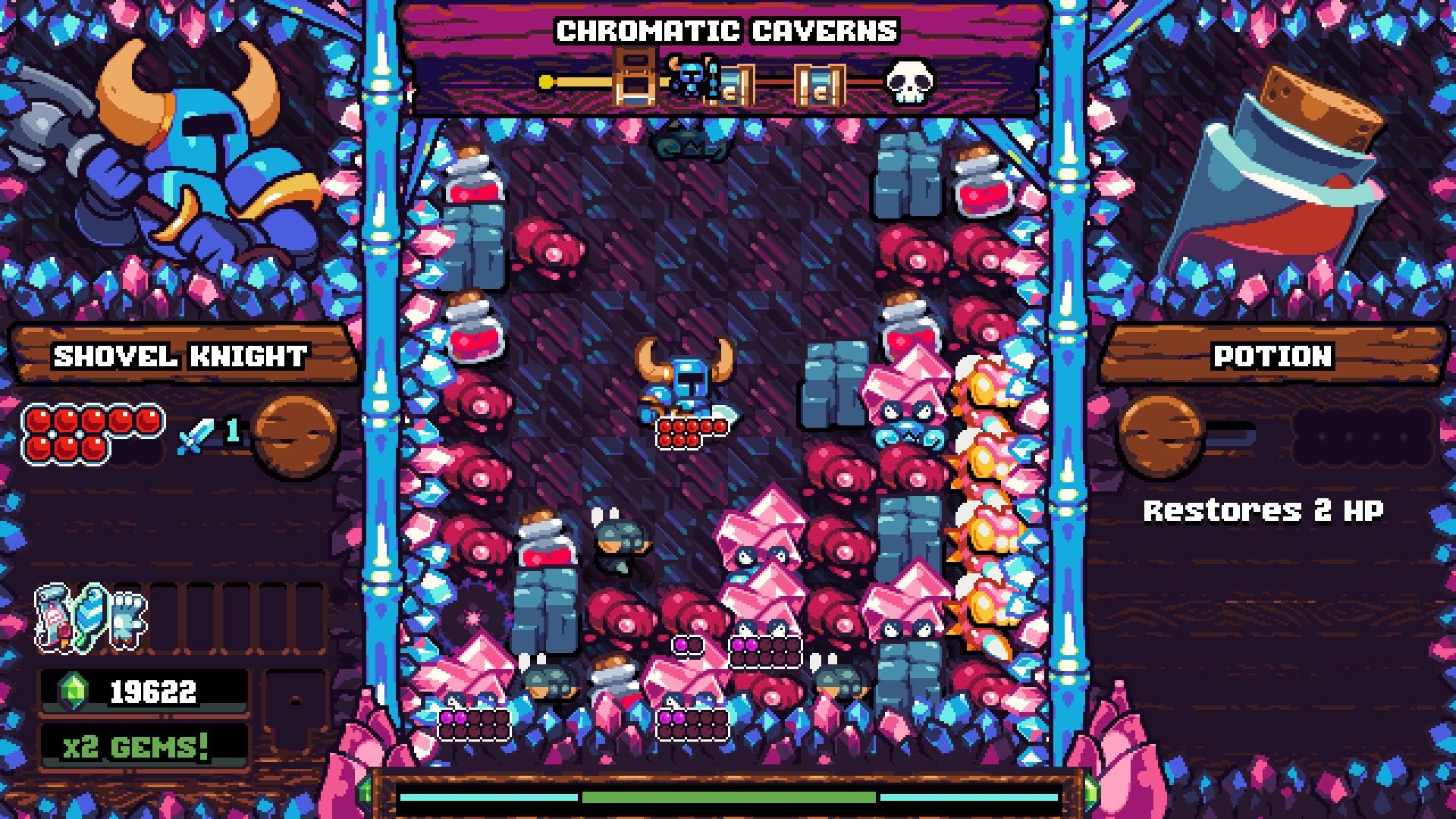 Blocks and creatures fall down. Your job is to clear them off the screen before becoming overloaded, while also trying to not die. You can clear the screen quickly by chaining your attacks. When you hit a creature or block and it is next to another creature or block of the same exact type you can damage them both. Clearing the board allows more creatures to fall. If you fail to clear the board then you become overloaded and the game is over. When you attack the creatures, most will attack back. On top of clearing the board, you have to stay alive to be able to do so. Do you wait till there are more of the same creature coming down to have a bigger combo? Or do you clear them out as soon as possible, and risk running out of health by doing so? The solution can be situational, it can also depend on the character you are playing. There are a handful of different ways to approach it each time you play. And playing as different characters changes your approach as well. 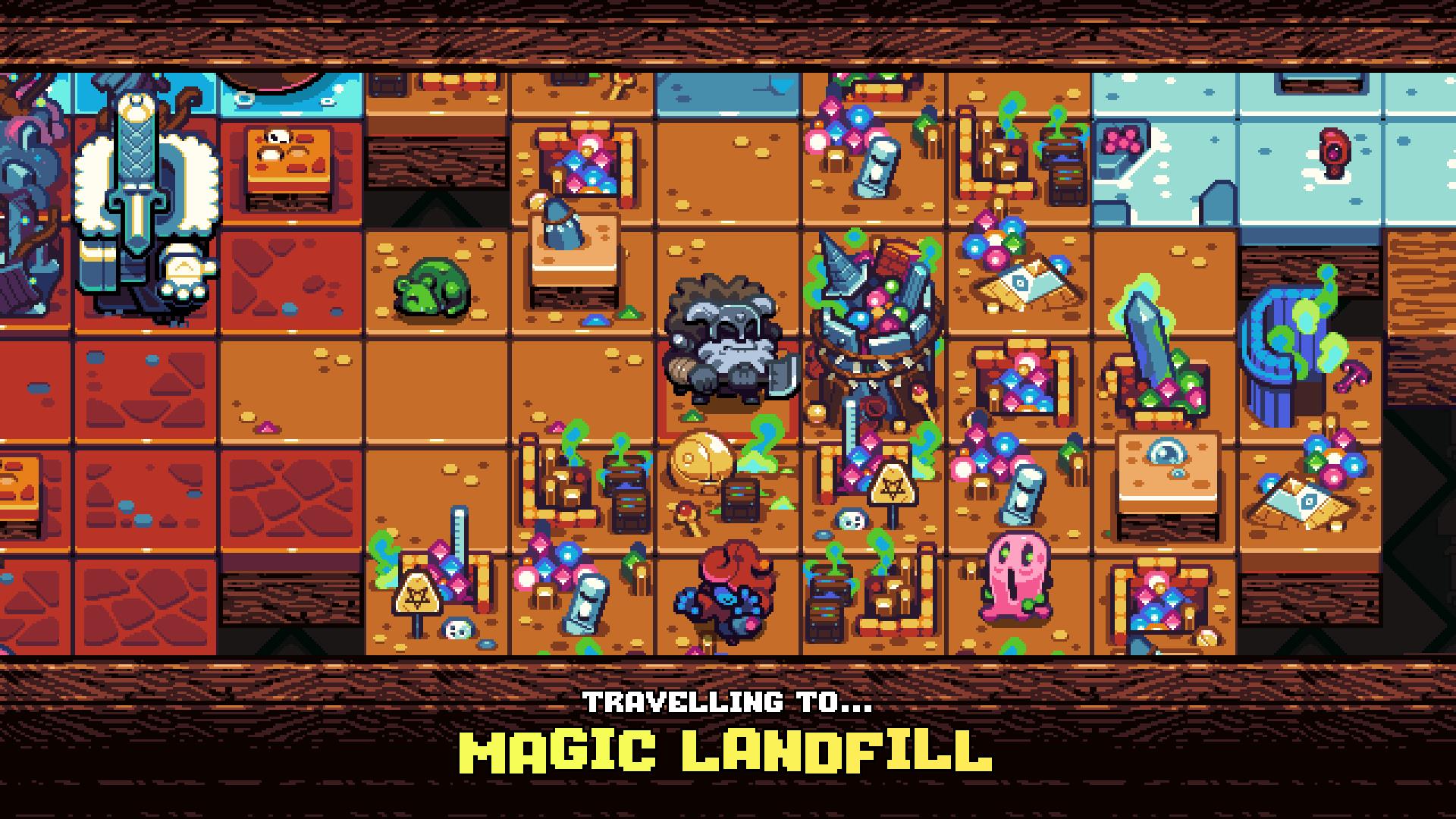 On top of solid gameplay mechanics is the great looking 8-bit style Shovel Knight games are known for. Throw in some catchy music that never feels like it’s overbearing, and you have exactly the game I want. My first time playing I sat in front of my computer for nearly two hours before getting up.

Shovel Knight Pocket Dungeon is simple to play but hard to master. I hate to be that guy, but it’s true. There’s no big learning curve to overcome. Once you understand the fundamentals you can beat the adventure mode. Besides the easy to understand mechanics, there are also patterns to master. It didn’t take long to understand the pattern of creatures. Which enemies I can let stack, which ones I can’t. Learning when I need to search out health, when I can afford to be a little careless.

Once I felt the game was becoming a little too easy to beat I could easily change that. Pocket Dungeon allows you to change some of the rulesets to turn it from more of a puzzle game with endless lives to a roguelite with one life. There are a few more elements that make this feel like a roguelite, such as relics that change the rules of that run. You even have a base of operations to start. This allows you to choose which character to make your run with. The game holds steady with more traditional roguelite elements of not being able to upgrade your character before a run, only while you are on it. And no one run is the same as the previous one. 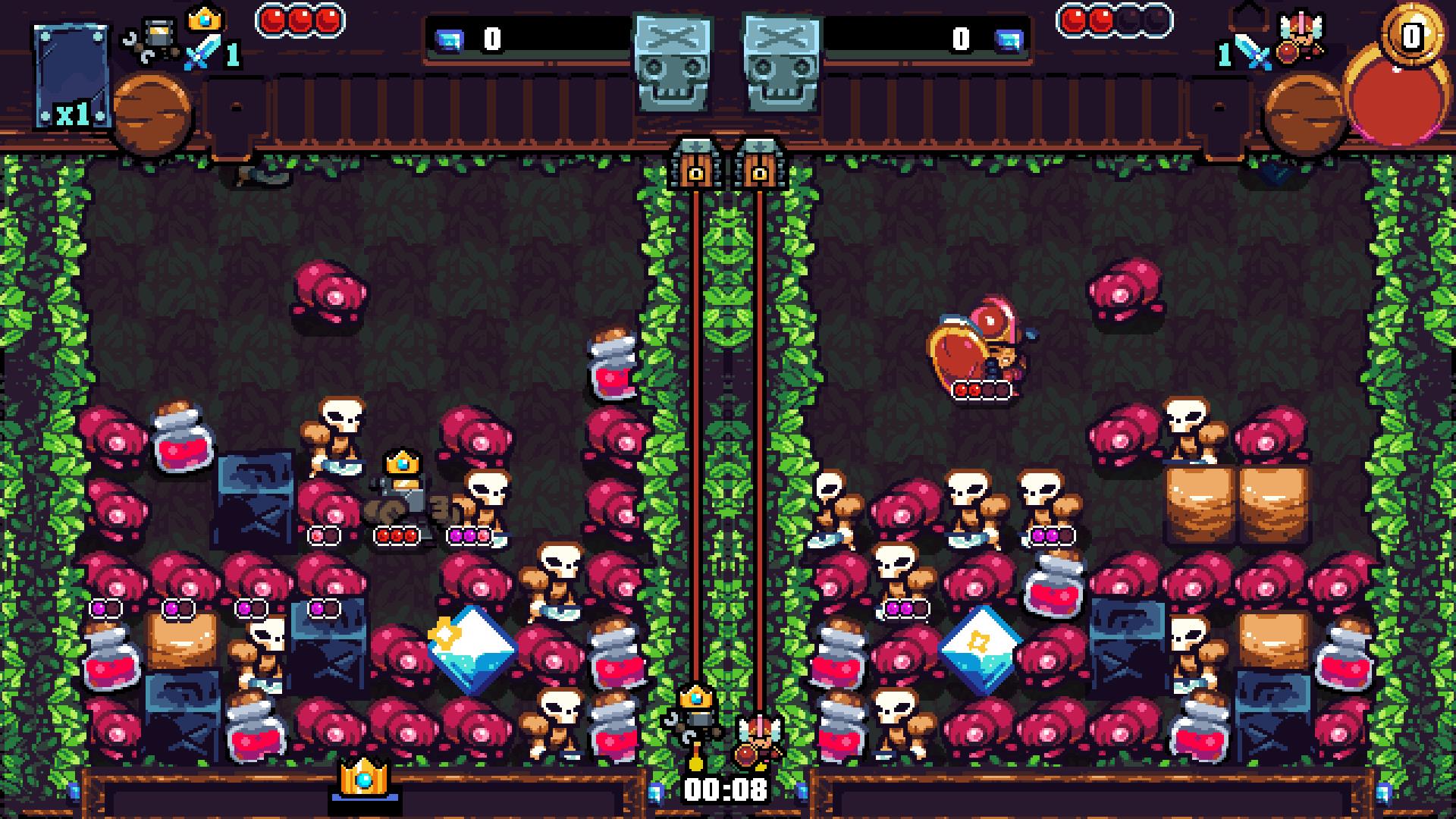 The only bit of disappointment I found was with the items and relics. These alter small rules or add bonuses to the game to make gameplay different. Items have a durability to them and leave after a while, while relics stay with you on the run. A few of the relics felt game-breaking to me. I found myself not taking the health potion relic, as it makes it so you don’t chain your heals. Doing that made dying almost impossible.

The pacing in the adventure mode was excellent. As you progress through the biomes you will eventually run into a boss fight. Defeating the bosses will unlock them for you as playable characters, making replayability stronger. Boss fights come along at just the right time. Whenever I feel like I’m getting a little bored with gameplay a boss fight would appear. Not to spoil anything, the last boss fight is a crazy intense mess that I loved every time I played it. 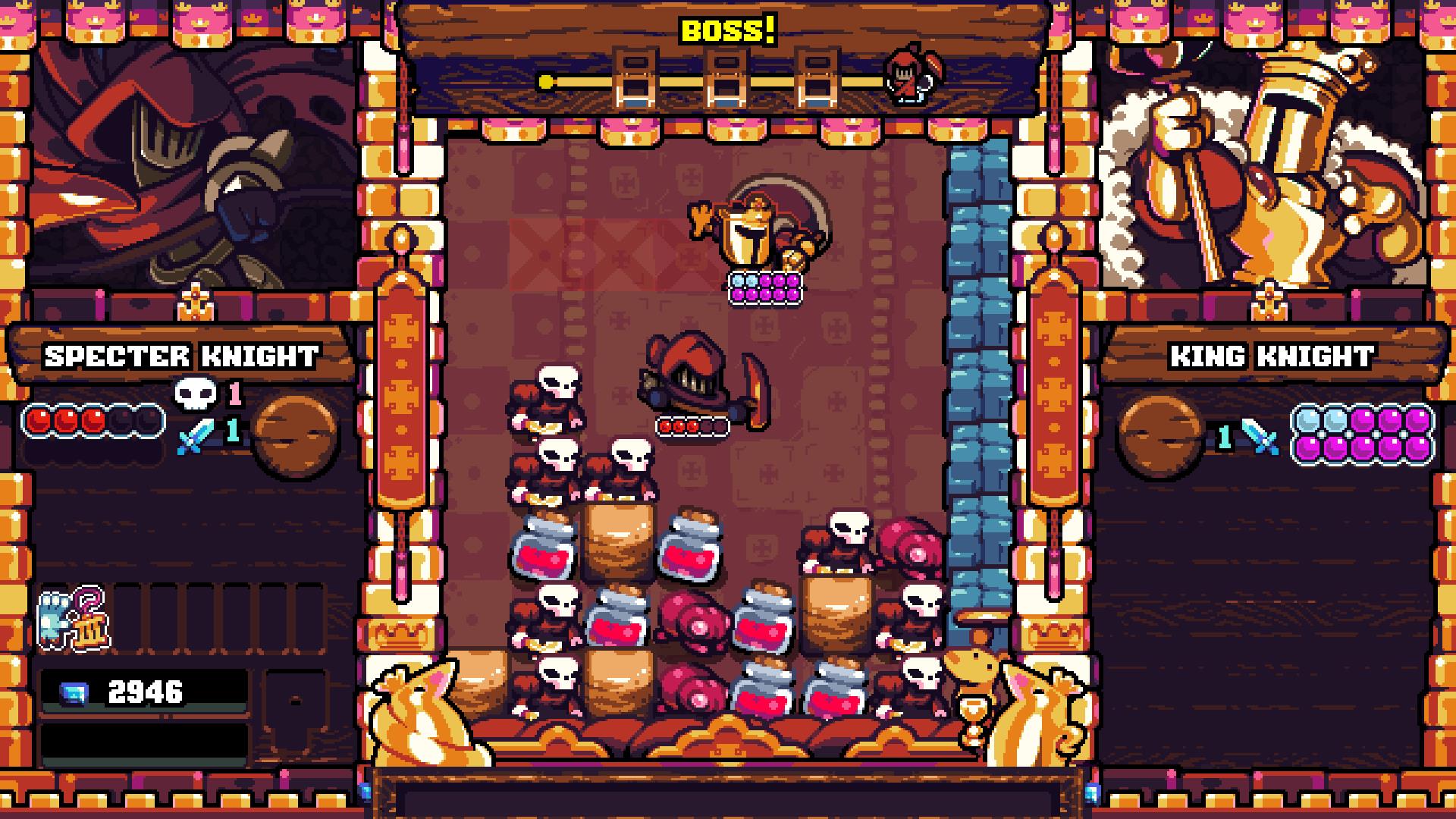 But having said all of that, the most important part to me with a puzzle game is being able to play it again, and again. Starting a run and finishing it in one sitting is pretty easy to do. My first time getting all the way through took about 38 minutes. Some runs have been longer, some shorter, but around 40 minutes to get through the adventure mode feels satisfying. Having a handful of characters, all with different abilities makes it easy to want to play again, but with a twist. 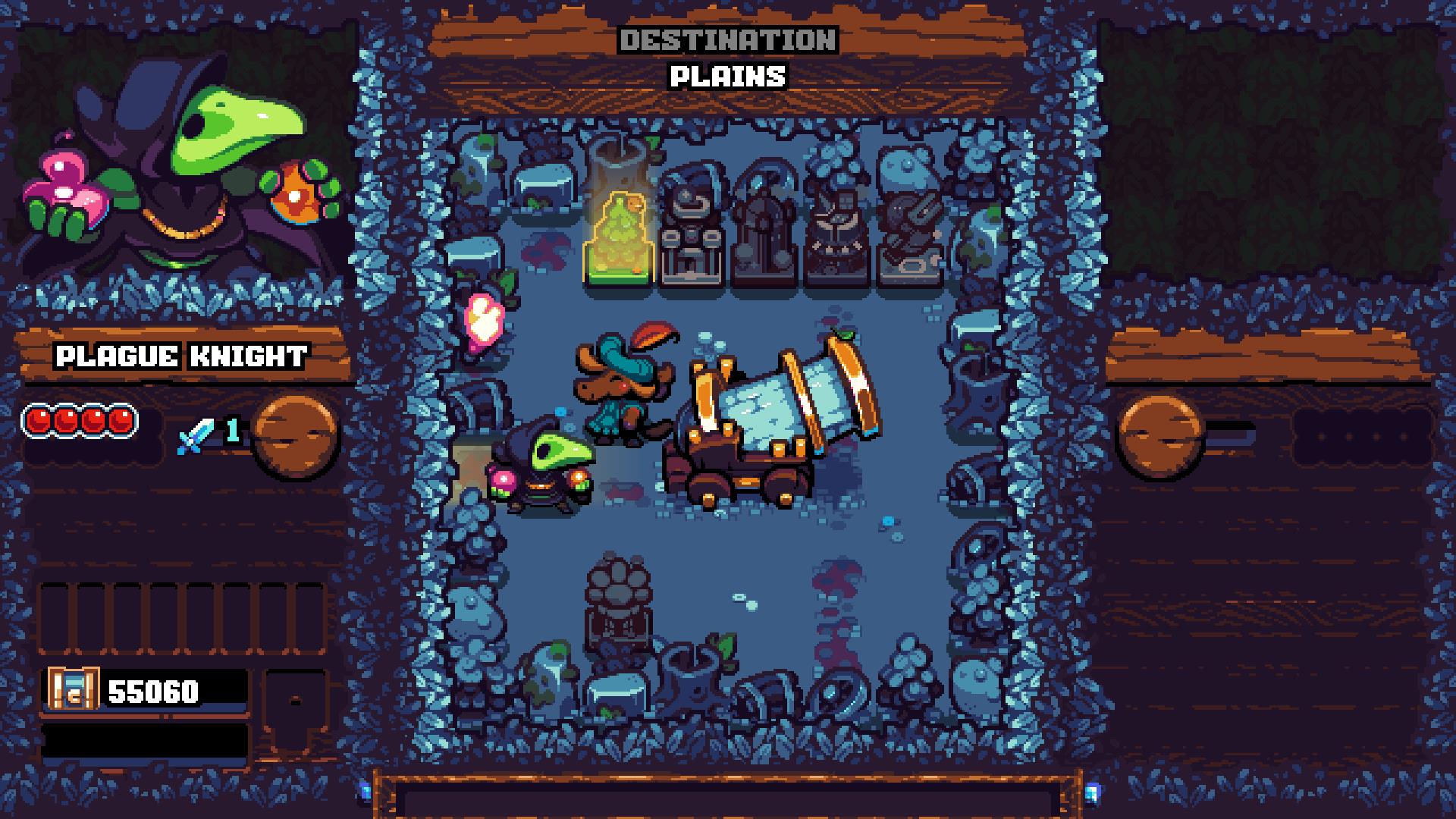 Having a lot of replayable elements - and enough that can change from run to run - kept Shovel Knight Pocket Dungeon from ever getting stale. I found myself pulled into the game instantly with its easy to understand gameplay. Learning how the game works didn’t take long, but trying to master it with additional characters is something I still haven’t completely done. Shovel Knight Pocket Dungeon has become part of my nightly ritual before bed. I hop on and try the daily challenge, or attempt a run with a character I don’t feel I’ve mastered. Some nights are more successful than others, but I’m never frustrated with the outcome of a run.

Pocket Dungeon grabbed me immediately and hasn’t let go. Everything in this puzzle game works; the aesthetic, controls, modes, bosses, replayability. A puzzle game that has this level of polish will stand the test of time with the likes of Tetris.