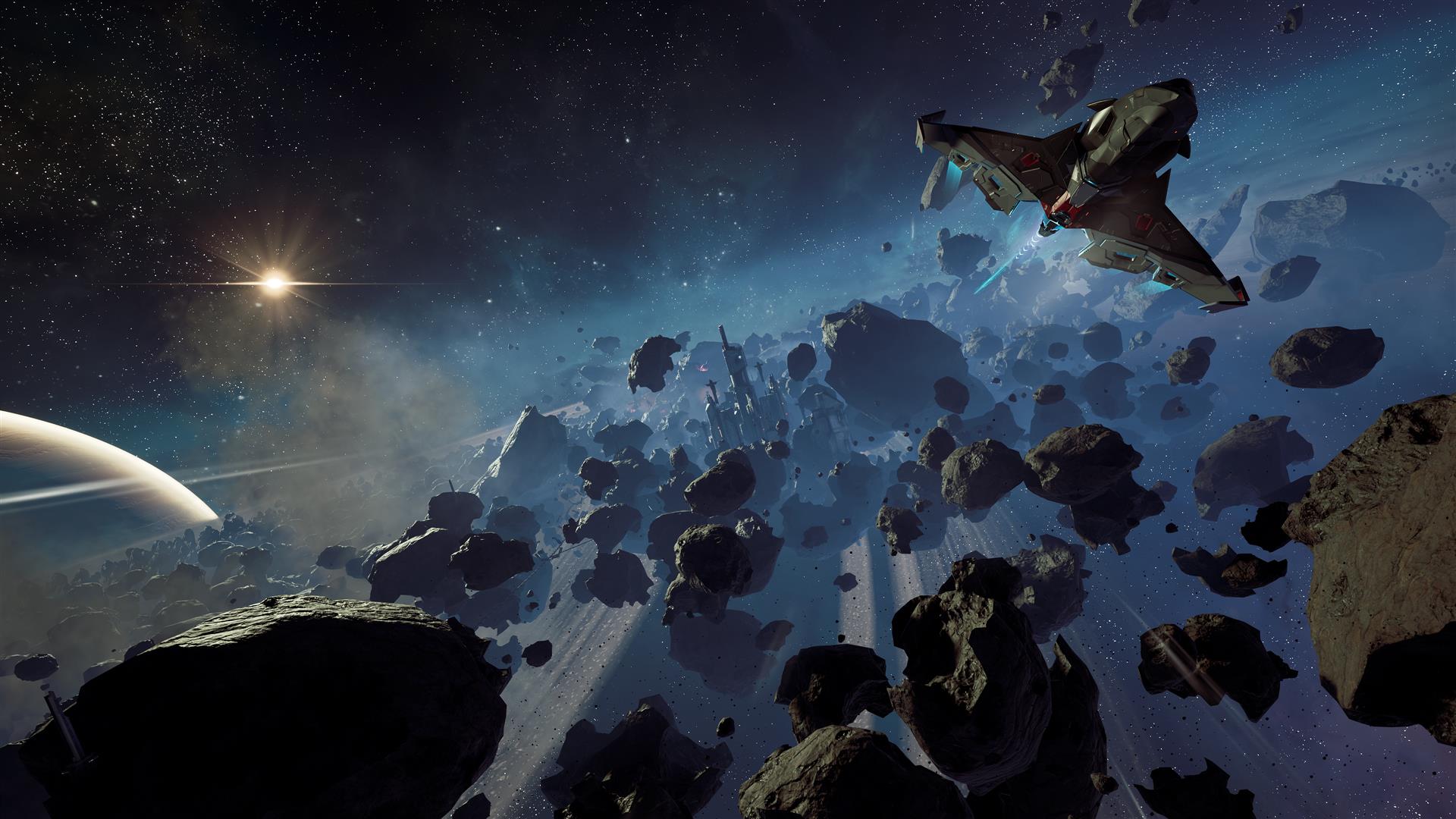 I’ll say one thing for Chorus – it is a rollercoaster ride. My emotions were all over the place while playing this game. One minute I was rolling my eyes at the impenetrable story, which makes itself known about every thirty seconds or so. The next minute, I was gasping in exhilaration while I was ripping through space, blasting bad guys with some of the best and tightest flight controls I’ve ever experienced in a game. Then I was swearing at Chorus’ ludicrous difficulty spikes, yelling out at my wife from three rooms away “How do they expect any human being to do this?”.  I was up, down, and all around with this thing.

Chorus, developed by FishLabs and published by Deep Silver, is a gorgeous game to look at. I played on a PS5, and some of the incredible space vistas this thing puts up on the screen are truly stunning. Players never leave their spaceships, so your ship is “you” as you go skimming between asteroid-belt outposts and delving into underground caverns. As the game progresses and more areas open up to the player, the art direction really takes center stage; who knew that an outer space videogame could have an ice world?

Players take on the role of Nara, a former ace pilot for a religious space cult known as The Circle. Nara was going along just fine, blasting infidels out of the sky quite happily in partnership with her sentient ship Forsaken, until the duo was commanded to destroy an entire planet. This broke something in Nara, sending her fleeing from the cult into a life as a scavenger and mercenary. When the game opens, Nara is slowly being pulled into the battle against The Circle, as her experiences with them – though scarring – give her insights into how the cult operates.

Now, I was able to convey that set-up pretty clearly in one paragraph. Nothing too complex going on there. But the way Chorus explains all of this is absolutely interminable. The storytelling in Chorus feels weird, stilted, and somehow just off, with cutscenes and dialogue sounding as though they were written by someone for whom English is a third language. Nara often speaks out loud to other characters, then hisses quietly to herself in what I assume are Chorus’ version of thought bubbles. The effect is incredibly off-putting and jarring. Most of the time I would have preferred a silent protagonist over Nara’s incessant whispering. 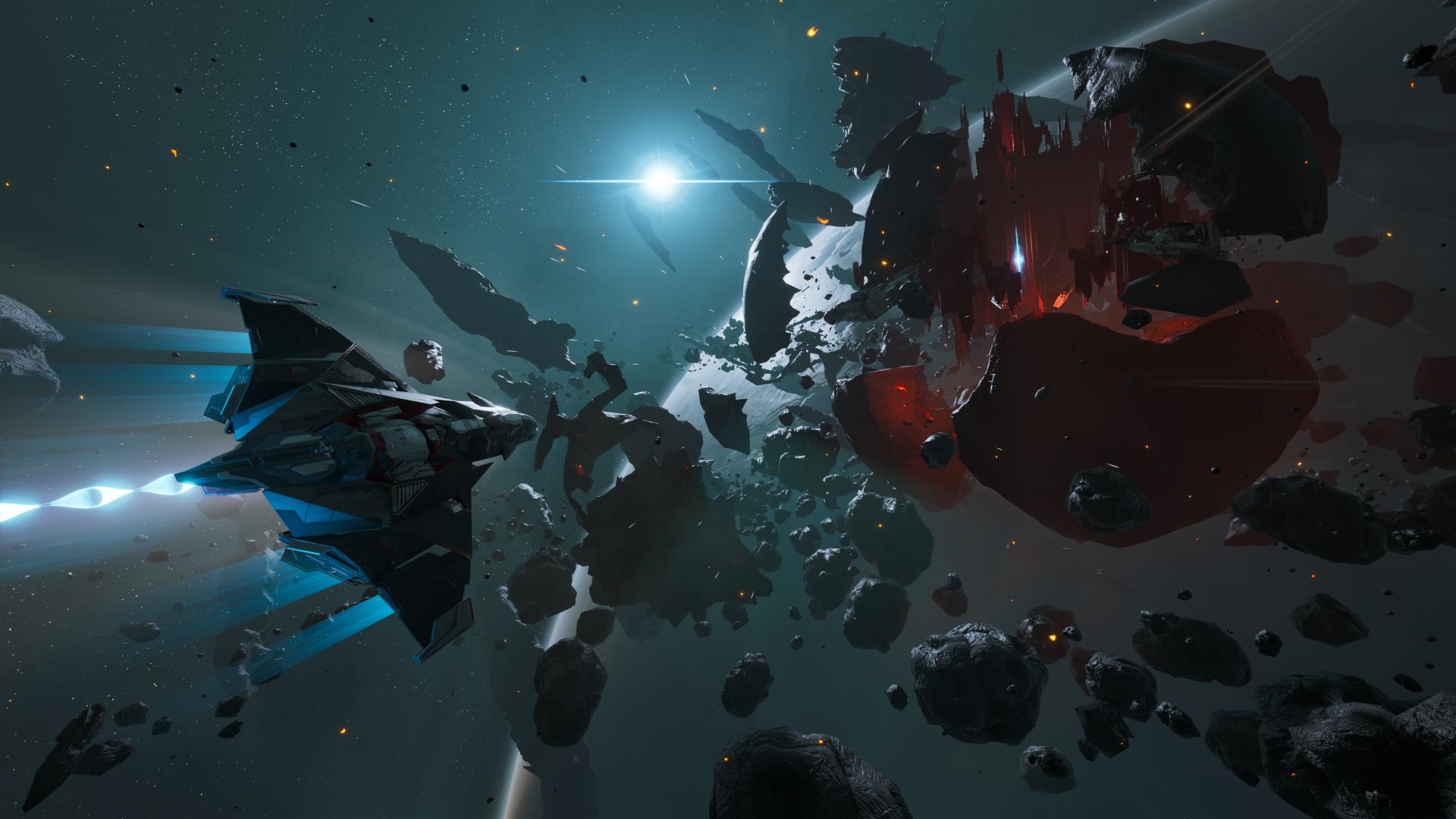 The only other performance of any significance in the game is that of Forsa (Nara’s nickname for Forsaken). As a self-aware spaceship, Forsa is prone to opinions and snit-fits, regularly expressing its feelings about Nara’s choices while somewhat reluctantly going along with them. This is expressed through what I can only call “robot speak”, with each syllable enunciated so it sounds as though it is human speech filtered through an AI. Beyond that, everyone pretty much sounds like a GI Joe character. Do your best overly-serious military voice and say something like “I need you to get back in line, Nara.” There. You’ve got it.

For most of the game, my eyes glazed over when it came to story moments – which are near-constant. I was either bewildered at what anyone was talking about, or completely unengaged emotionally in Nara’s arc. Many of the characters that appear seem to have some history with Nara, and they all want to judge her for having once been part of The Circle, but none of that carries any weight once she does some ship blasting on their behalf. They simply offer their thanks, and send her off on the next mission. This leaves the flow of missions feeling empty, malformed, and utterly humorless. 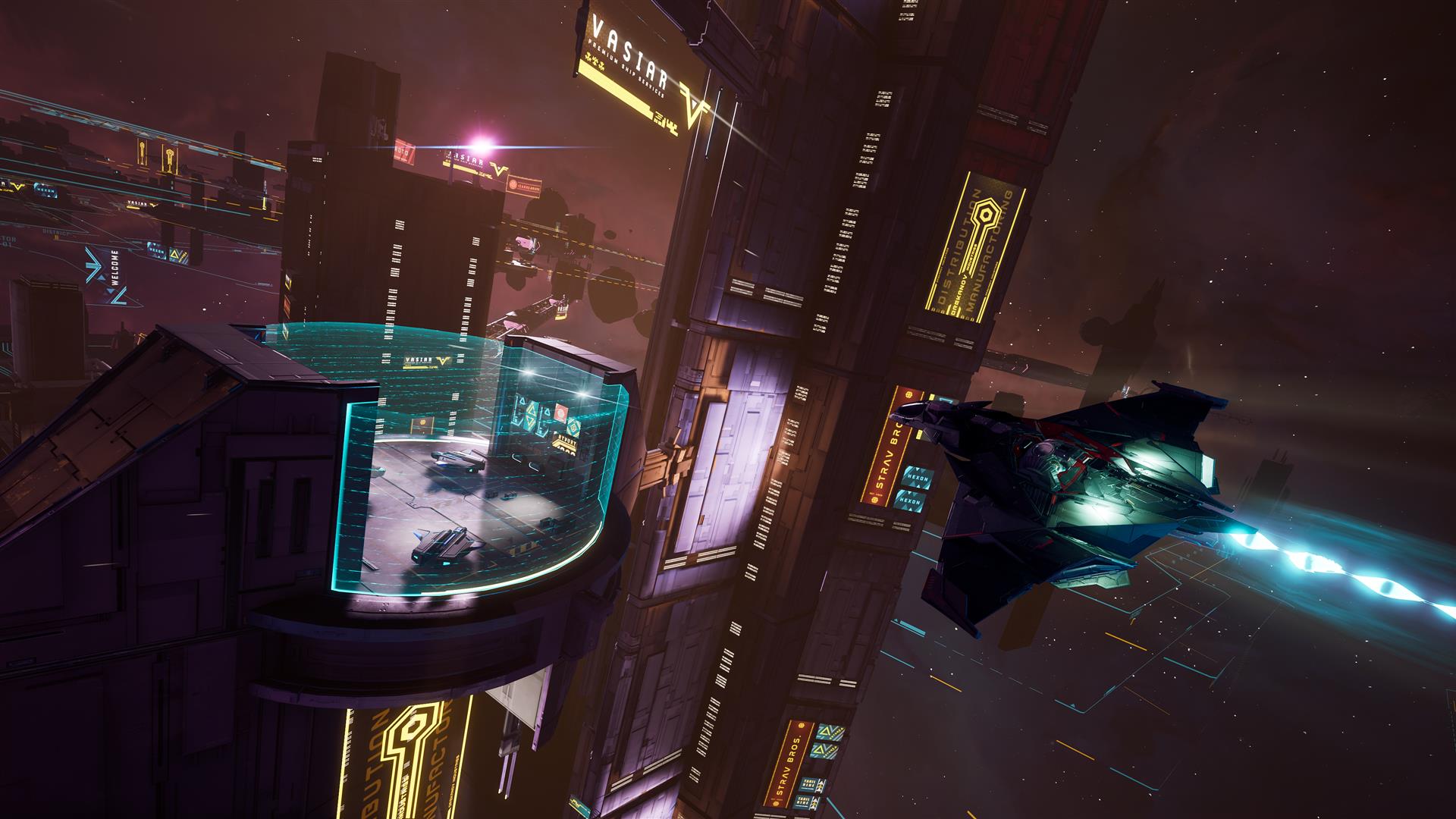 The story didn’t really work for me, despite some cool world building and the amazing setting, but some of the side activities are pretty cool. As Nara goes about the business of defeating The Circle, she is regularly sidetracked by incoming communications – distress calls, requests for help, old beacons, etc. Tracking down many of these will simply result in a short little escort mission, or even worse, a quick fuel transfer to get a stranded ship moving again. But every now and then, one of these will blow open into a side mission that takes Nara back and forth across the system in some of the best narrative arcs in the game. Chorus uses an open-world-style mission structure, so you can always come back and clean up any unfinished business by selecting something from your quest log if you wish.

Chorus is at its best when it gets out of its own way and just frees up the player to fly around and blast fools. The FPS-style ship controls took me a few moments to get used to, but once they clicked, I realized that they were some of the best and tightest flight controls I’ve ever used in a game. Your ship is crazily responsive, and as the game moves forward and Nara unlocks more powers (known as “Rites”), you become a veritable superforce in space battles. 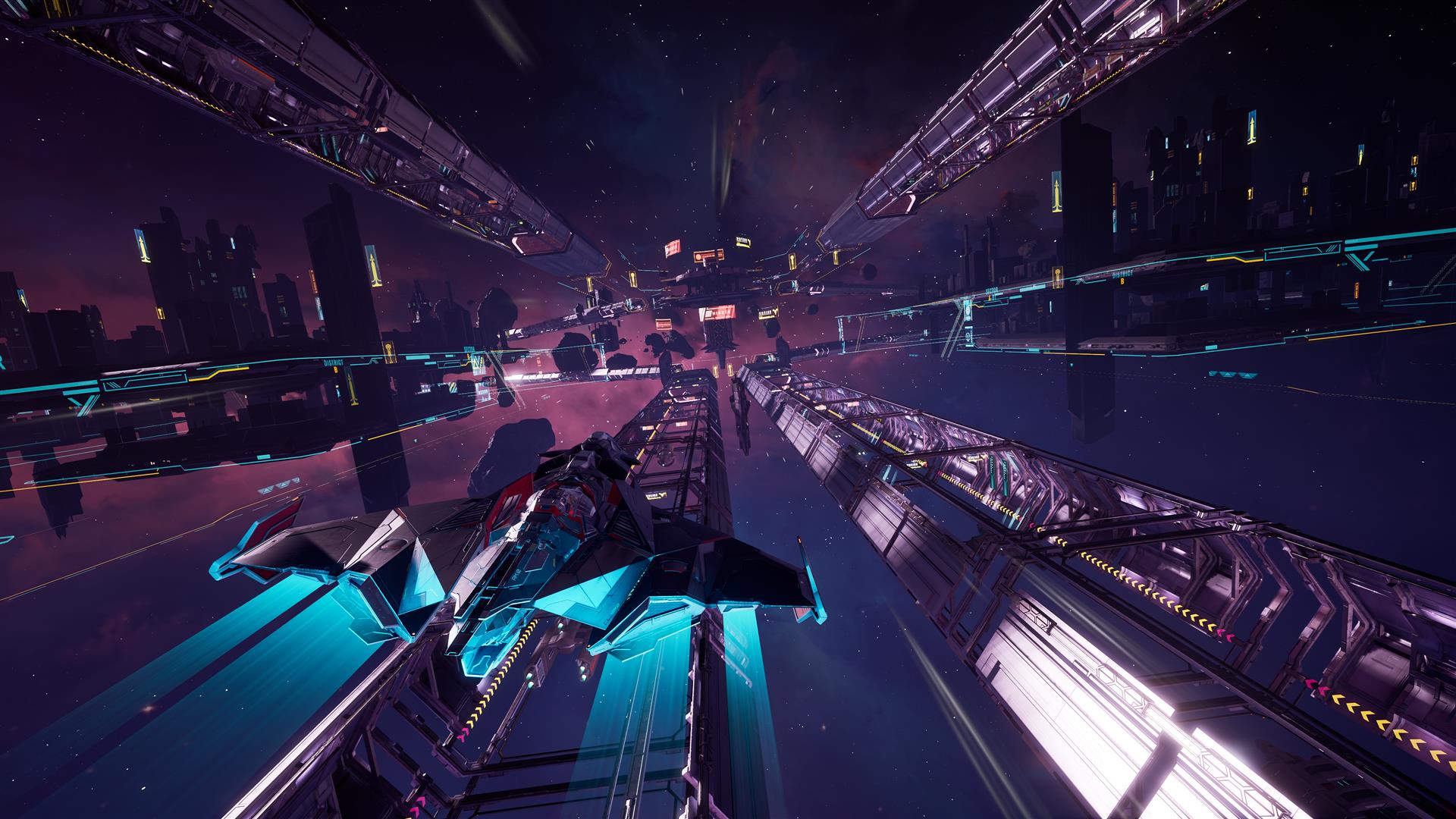 Each newly unlocked power completely changes the way you fight in battles. A drift mechanic lets you slide past enemies and whip around on them, blasting them from behind. Nara eventually gains a warp, which will allow her to blip across the screen to be in prime firing position behind an enemy. A lightning-style ability gives her the power to instantly drop an enemy’s shields. Nara is strong in the force, and the combat in Chorus is fast and fun, allowing the player to pull off some amazing Han Solo-style moves that will have them whooping in glee.

Enemy types are slowly unveiled as the game progresses, allowing Nara to go up against some truly devious foes. While these enemies are great fun in open battles, some of the unveiling moments can be extraordinarily difficult. It almost feels like every time a new enemy type is revealed, Chorus asks the player to fight a super-powered version of that baddie in an enclosed area without enough room to maneuver – resulting in some of the most controller-snapping battles of the game. 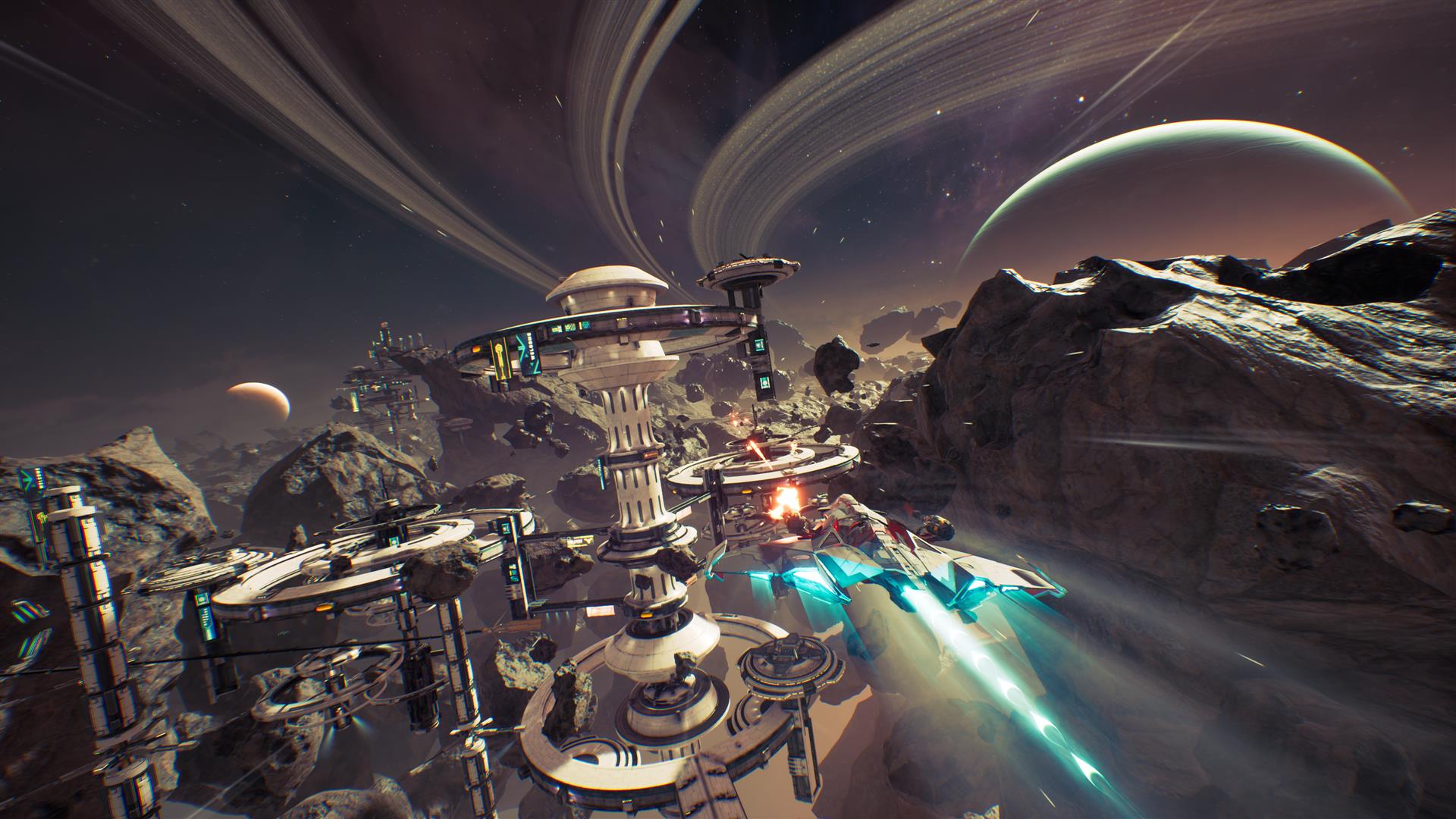 There is nothing else in Chorus that is as difficult against these initial battles against new enemy types – which at several points made me want to just put down my controller and walk away. Once you have beaten them initially, these enemies will show up in other battles and will be total pushovers, leaving me wondering why they had to crank up the difficulty the way they did, which creates artificial barriers to progression.

I would love to see a sequel to Chorus that scales back on the story and focuses more on the open-space combat. Nara and Forsa are absolutely at their best when they are threading the needle between tumbling asteroids, listening to the dying screams of enemies as they gun them down from above. The space combat in Chorus is so damn good, but everything else is just disjointed enough to make it weird and exasperating. Chorus is a miss, but it is so close to a hit that you can taste it, which makes it all the more frustrating.

Chorus’ controls and awesome powers make its space dogfighting some of the best, but the convoluted story and frustrating difficulty spikes hold it back from greatness. I would love to see a sequel with more interesting missions, where it just gets out of its own way and allows players to soar.