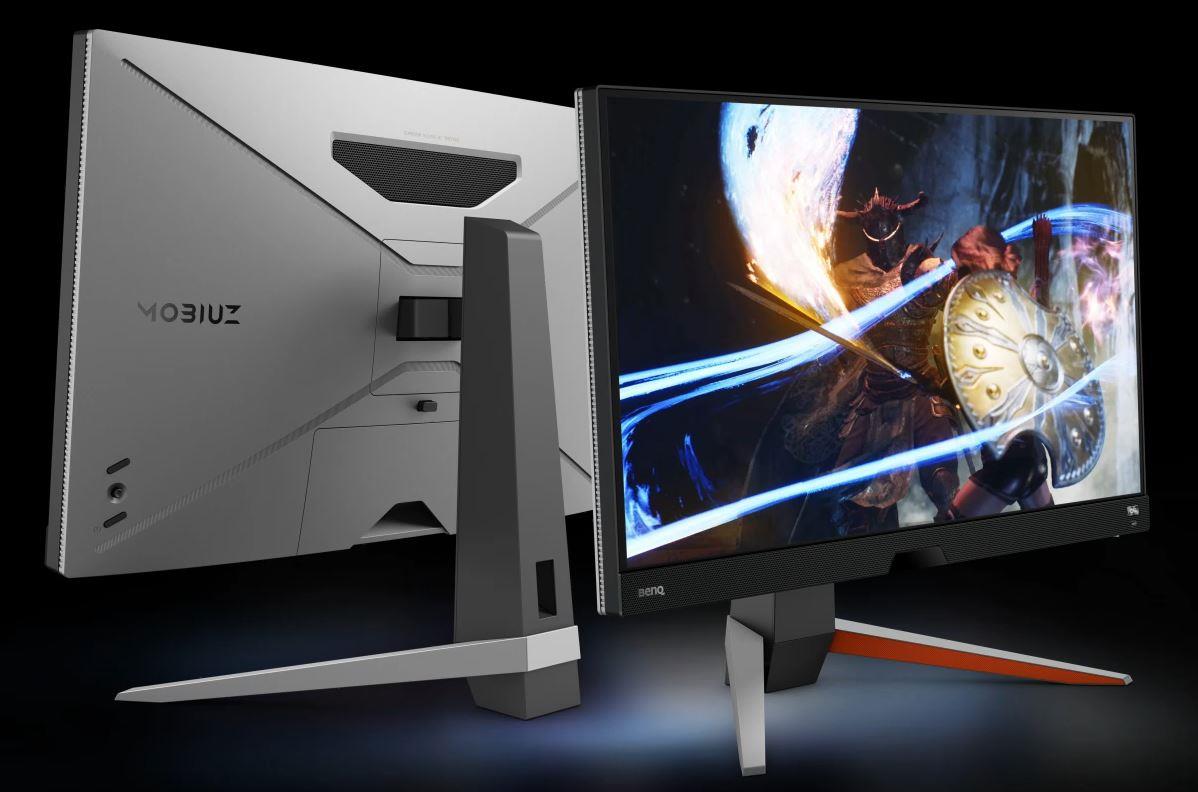 Frequent readers know that I’m not the techiest guy on staff at Gaming Nexus. Sure, I can understand what I’m reading when looking at a tech site’s review of this gadget or the next. But when I’m actually using a new product, I’m far more concerned with how it is making me feel than how many blip-blops are showing up on the screen. There are plenty of technical reviewers on the internet, so if you are especially stat-minded, I would recommend seeking one of those out. I will of course dip a toe into blip-blop territory in this review of BenQ’s Mobiuz EX2710Q monitor, but I’m really going to focus on my experience using this thing.

And my number one observation from my time using BenQ’s EX2710Q as my primary gaming monitor is this: thank the lord in heaven above that I had this monitor on my desk when it came time to review Forza Horizon 5. My go-to monitor is great, but it is 1080p – which in most situations absolutely meets my gaming needs. Generally, I don’t think that resolution is that big of a deal in monitors 27” and under, and keeping the resolution down lets my mid-tier rig push a lot more frames per second without bursting into flame. However, my standard monitor also doesn’t support HDR, which is becoming more of a sore point. I didn’t realize just how sore that sore point was until I fired up the EX2710Q. 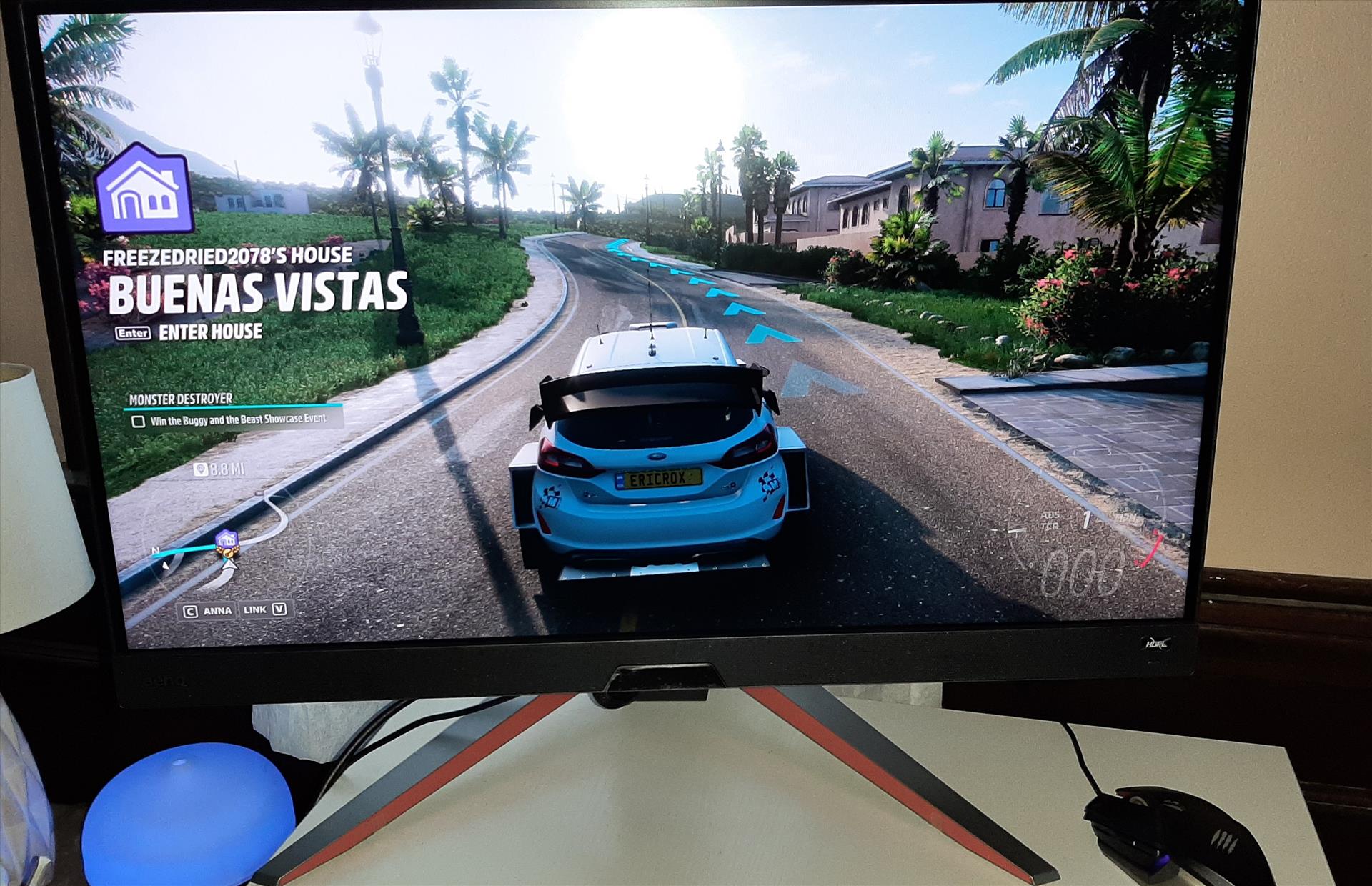 Playing Forza Horizon 5 one the EX2710Q was a bit of a revelatory experience. I knew my PC was super sweet, but I wasn’t aware of just how fantastic the visuals it can produce could look until I saw them on this monitor. For the blip-blop crew, the EX2710Q's stats are as follows: the brightness is 250 cd/m2, there is support for 1.07 billion colors, the contrast ratio is 1000:1, and about thirteen HDR features are listed in the monitor’s tech specs (HDR10, DisplayHDR 400, Cinema HDRi, DisplayHDR, Game HDRi, HDR). For the rest of us non-blip-bloppers, this means that in Forza, the sun shines brighter, the oceans sparkle clearer, and the depths of the jungles look darker. And the cars themselves, of course, are sleek and gorgeous.

The EX2710Q boasts a refresh rate of 165Hz, which means that it can put a lot more frames per second into my eyeballs than my PC can produce. I used the benchmark feature in Forza to push my PC to the absolute limits of its abilities, which produced some jaw-dropping moments. Frankly, for the 4K true believers, I have a hard time believing that visuals can get much better than what I was seeing on the EX2710Q. Yes, a lot of this is due to the coding in Forza Horizon 5, but damned if the combination of that game and this monitor don’t make my set-up sing like a gorgeous tropical bird.

Speaking of singing, for the entirety of my test period with the BenQ EX2710Q, I disconnected my standard speakers and headset and played sound only through the monitor’s built-in treVolo audio system. I haven’t used built-in audio on any of my screens for years, so I was wondering whether I would be able to accept sound produced by the two 2W speakers (and the little 5W sub) chirping out of my monitor. But I’ve actually been pretty impressed with the sound quality the EX2710Q has been able to produce. There are a few different sound settings available, but I generally found the default to be pretty sufficient. 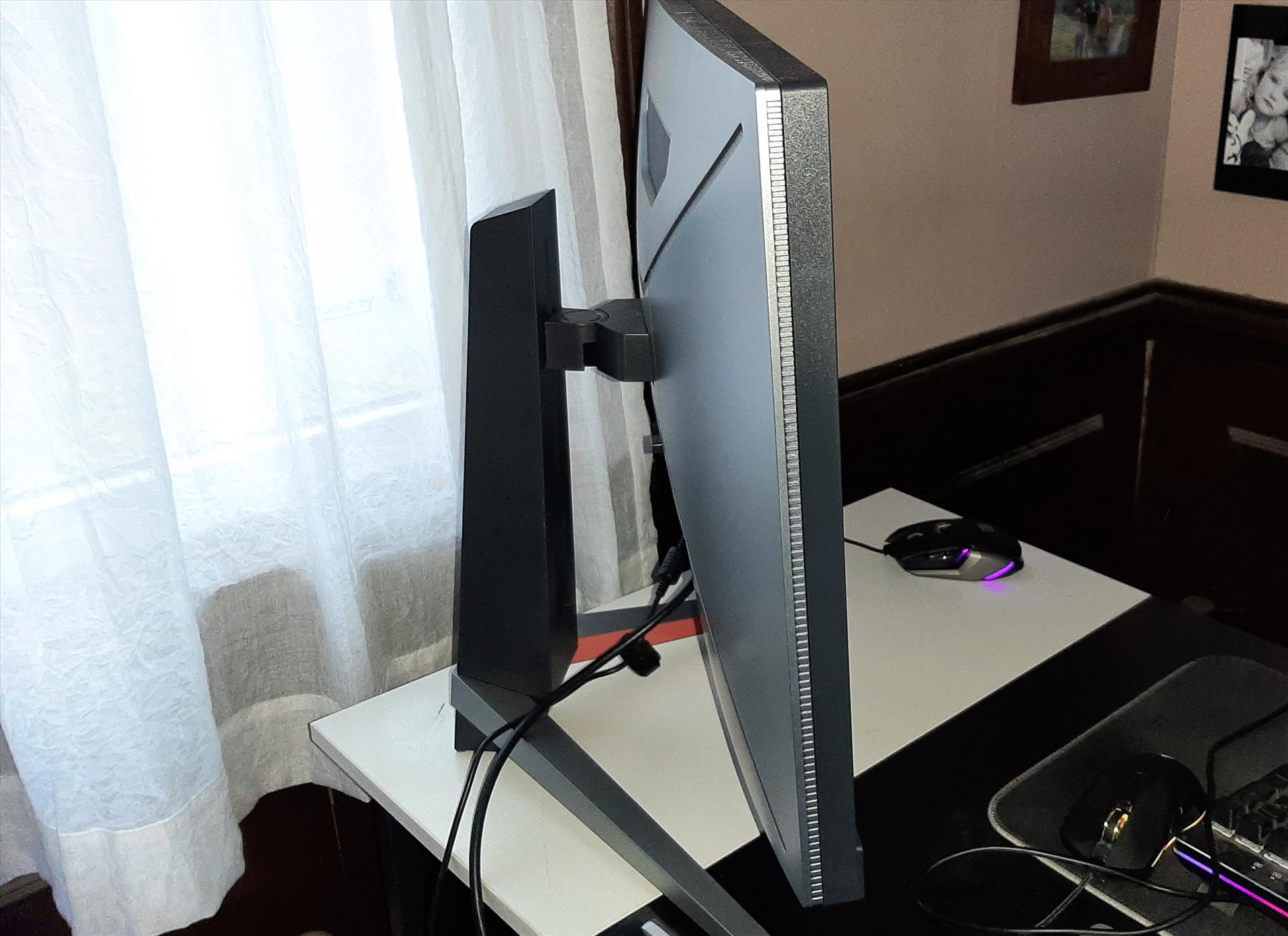 I have the monitor sitting on a desk in my bedroom, and at about half volume the sound system does a reasonably good job – to the point where I forget where the sound is coming from and just accept it as “normal”. I did have a few qualms about how difficult it is to adjust the volume on the panel via the single catch-all joystick widget on the back right, but once I settled on what I considered the correct volume, I just left it alone and didn’t worry about it (a power button and source-select button round out the little control panel). Audiophiles will still want to go with a sound bar or a decent headset, but for everyday use, I was surprisingly satisfied.

In addition to Forza, I spent quite a bit of time playing Far Cry 6 on the BenQ EX2710Q. I played most of the game on my old monitor, and here I need to be very frank. My PC has the oomph to run Ubisoft’s texture pack for Far Cry 6, but on my 1080p monitor, I could not see enough different to worry about it. The game just looked the same to my untrained eyes, so I turned the textures off and focused on other cranking every other setting to the maximum. But with the higher resolution (2560 x 1440, if I forgot to mention it above) of the BenQ EX2710Q, I was able to instantly see the difference the texture pack offered. On my old monitor, Far Cry 6 looked great - but on the EX2710Q, Far Cry 6 looks truly “next-gen”. So dang it, I’m going to have to upgrade. 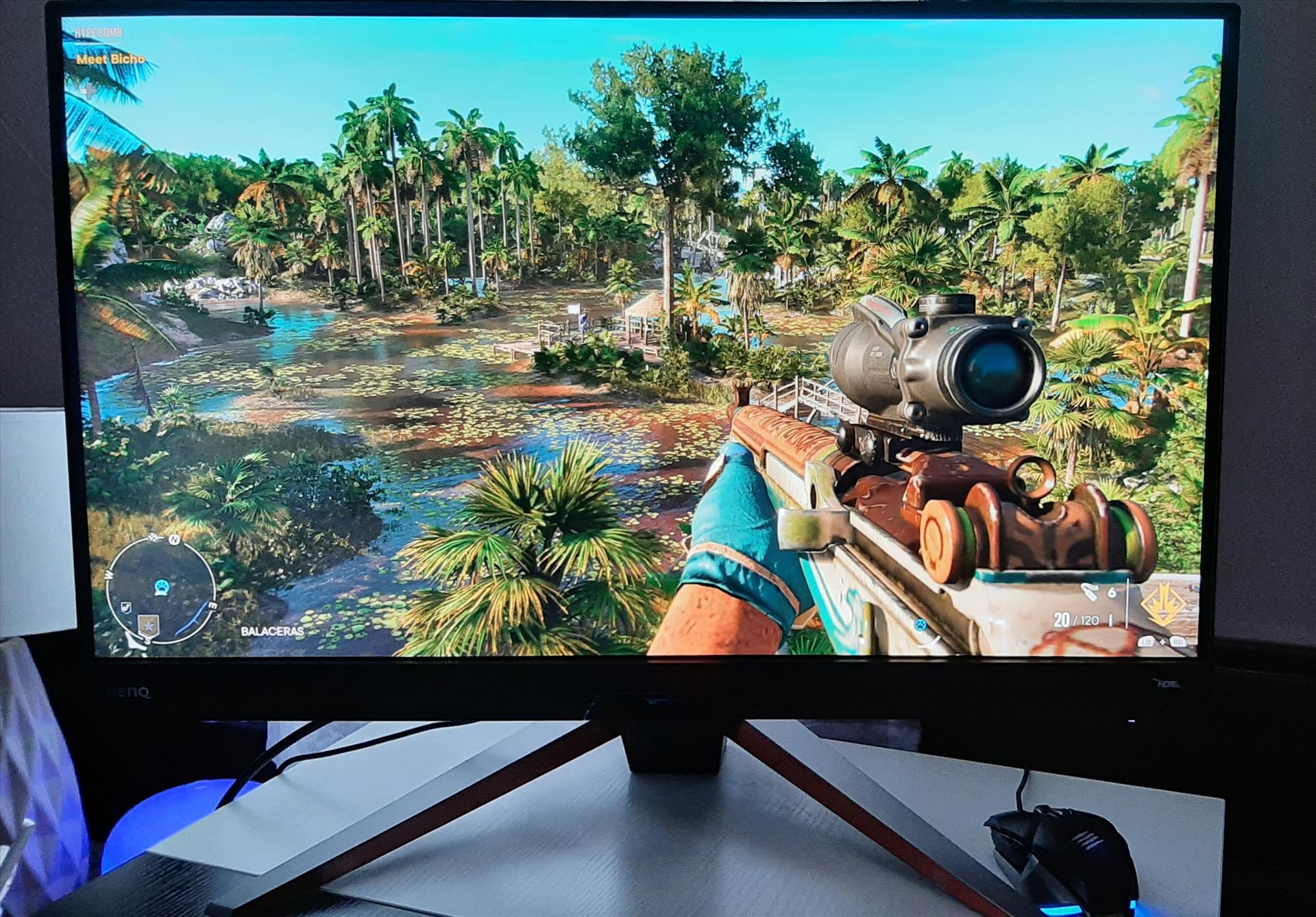 Design-wise the BenQ EX2710Q is…well…a monitor. It is attractive enough, but what does one really need in monitor design besides a thin border and a nice, black viewing space? The monitor is appropriately sleek and rather thin from the side, cutting a fine figure in my bedroom where no one cares what it looks like. The back panel offers two HDMI ports, one DisplayPort 1.4, a headphone/speaker jack, and several USB ports. Once you have your setup complete, a lovely little detached panel snaps into place to hide unsightly cables from any bedroom invaders.

One area in which I immediately noticed some slick design thought was in the easily-assembled V-shaped stand (very futuristic, with a sporty orange stripe). Once you slap the monitor on the stand (which literally takes about three seconds), you can raise, lower, tilt, and swivel the monitor at will, with a very nice-feeling smooth motion. The monitor stays right were you put it, solid as a rock, making me ponder the many white-board sessions that must have gone into the stand design. So – though they are often ignored by press and consumers – lets take a second and give the stand folks a bit of appreciation. 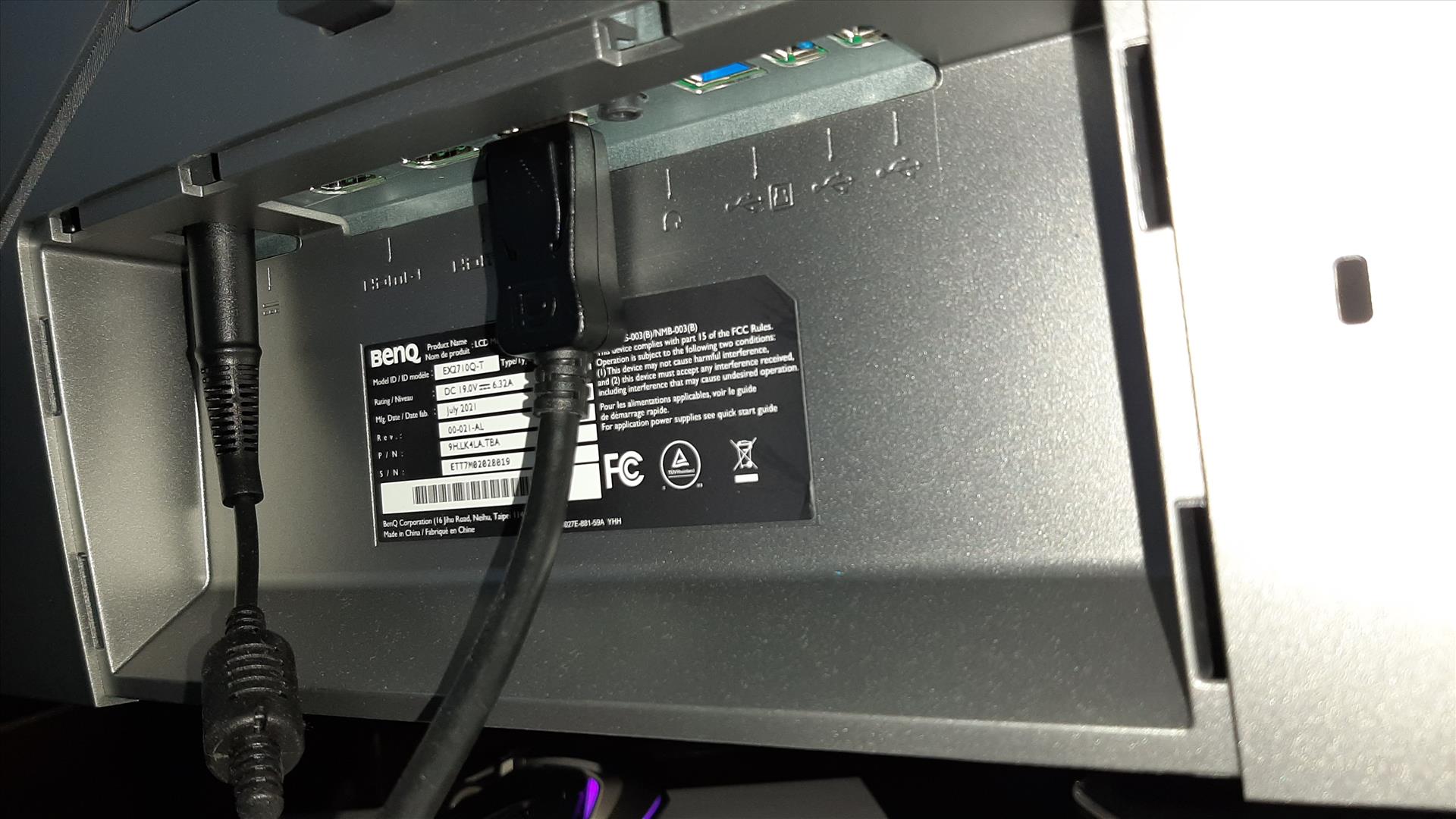 As someone that is relatively new to PC gaming, my experiences with the BenQ Mobiuz EX2710Q have been both eye-opening and educational. Replacing my pretty-good monitor with a beast like the EX2710Q has made me realize that having all of the bells and whistles on my PC doesn’t mean a thing if I don’t have an appropriate monitor to let me see them. Due to the size limitations of my set-up, I don’t want anything bigger than 27”, but it has become clear that I can pack a lot more performance into those 27” than I have been.

Without having experienced the monitor for an extended period, I might have found the list price of $599.99 to be pretty steep. But the time I’ve spent with the EX2710Q has made a believer out of me. I’m going to save my pennies for a few weeks and make this monitor a permanent part of my set-up. If that isn’t a resounding recommendation, I don’t know what is. This monitor is simply stellar.

The BenQ Mobiuz EX2710Q is a great upgrade for those that have been using 1080p monitors for gaming and don’t really understand why they should step it up. With clear, brilliant visuals, crazy simple setup, and a surprisingly decent on-board sound system, the EX2710Q has made a believer out of me. I am hard pressed to think of a single reason not to recommend this monitor.