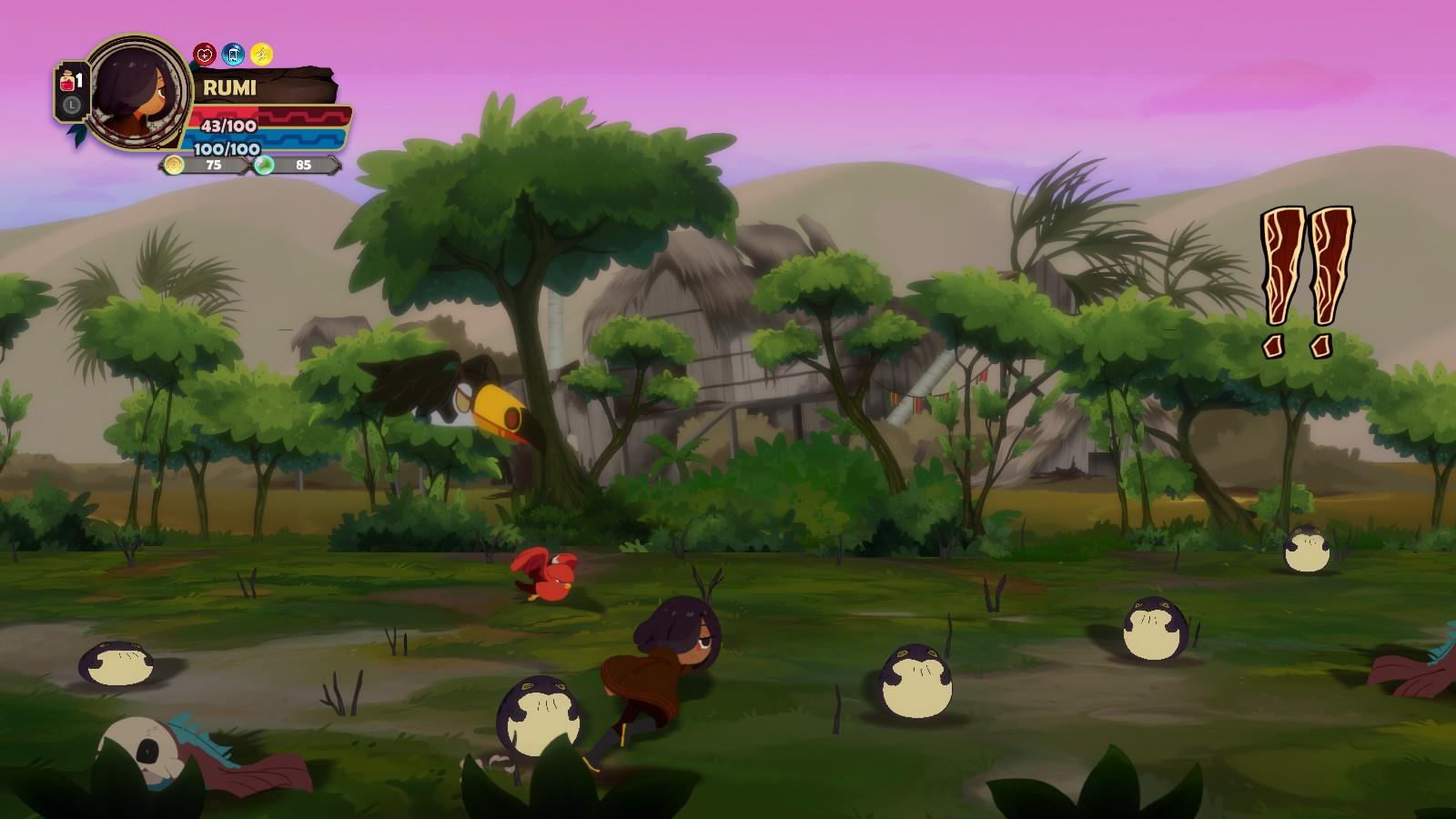 Several years ago I checked out a game called Vertical Drop Heroes, which was a rogue-like vertical platformer. In Drop Heroes, once you died you had to restart the game again, save for various checkpoints, but any items and personal progress you made stayed. In that way you were getting more powerful over time, and in doing so you would be able to progress further and further each time. Several other similar games have come out since and today I’m checking out one that adds in some beat-em up elements as well. Let’s dive into the jungle with Tunche.

The game doesn’t give you much of a story to go off of, mainly that monsters are appearing in the forest and they’re somehow connected to a creature called Tunche. I tried looking up any sort of story that I may have missed somehow, and it turns out that the story of Tunche is actually from Peruvian legend. The website livinginperu.com has a page for El Tunche with the following sentences: “No one knows for certain what the Malignant Tunche looks like. There is only one thing that everyone knows: it reveals its presence by a whistling sound, a sound people fear throughout the Peruvian Amazon.” I’m not one to explore these kinds of stories but having a game based on a Peruvian legend? That’s a pretty interesting way to get people checking out the game if they’re into that kind of thing, but while the story itself might be interesting on that front, how is the actual game? 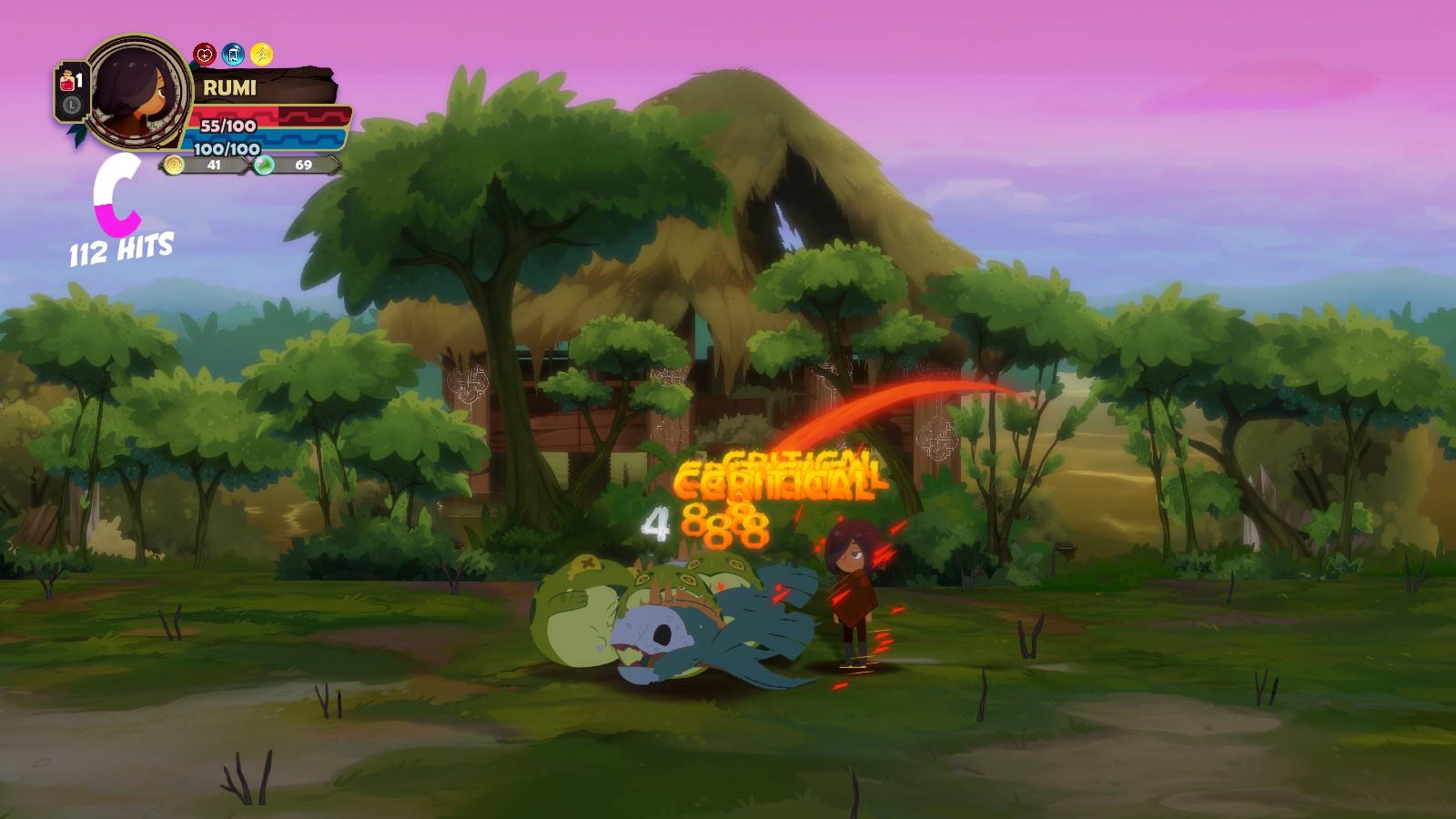 When you first start off, you can choose from one of five characters, one of which is Hat Kid from A Hat in Time…for some reason. There’s not much you can do at the camp to start with except for begin your adventure. Each stage consists of multiple rooms, most of which consist of numerous enemies to defeat, before moving onto the next room. Each character has their own normal and special attacks they can use to defeat the enemies and once all of the enemies in a room are defeated, the screen darkens and you’ll get your reward for that area before moving onto the next one. Rewards can consist of coins, essence, light blue orbs, and cores that can give you certain enhancements such as healing a small bit of health and mana between rooms or adding poison to your special attacks that use mana. After the first few rooms you’ll start getting a choice of rewards for the next room you play through; going for either experience points or a new stone for example. 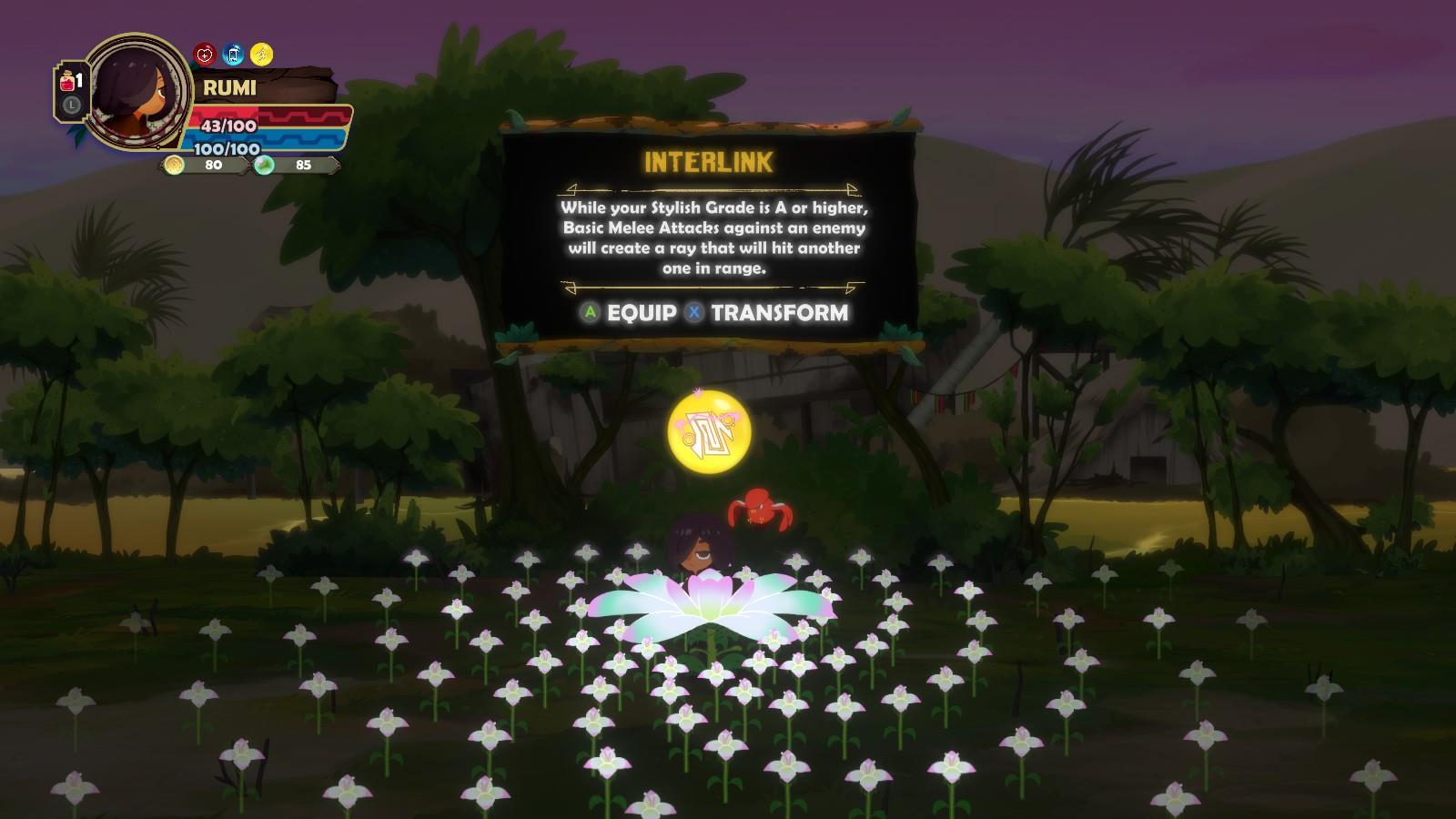 Once you die (and early on this will happen quite a bit), you’ll go back to camp but you’ll retain everything you’ve collected for the most part. Throughout your journey you’ll eventually come across different characters that will be at the camp the next time you die. Go back there and these characters will help you in your journey. You can spend essence to gain new abilities and skills for a character, spend the light blue orbs to increase the power of the orbs you find, and another kind of special item that you can use later on to either place healing shrines in each area or alter the rewards you can obtain.

There is a bit of a catch though: the orbs to power up cores and the items to place those healing shrines (basically whatever you can spend at the camp with a character named Ogi) are shared among all characters. However, gold and essence are character specific, meaning that if you want to play as different characters, you have to level them up individually. In addition, when you die and restart your adventure any progress you’ve made on the character you were playing as stays and you can freely swap characters in camp. However, when you restart you won’t have the cores you found the previous run, though they are permanently available to upgrade at the camp with Ogi so when you find them again, they’ll be more powerful. 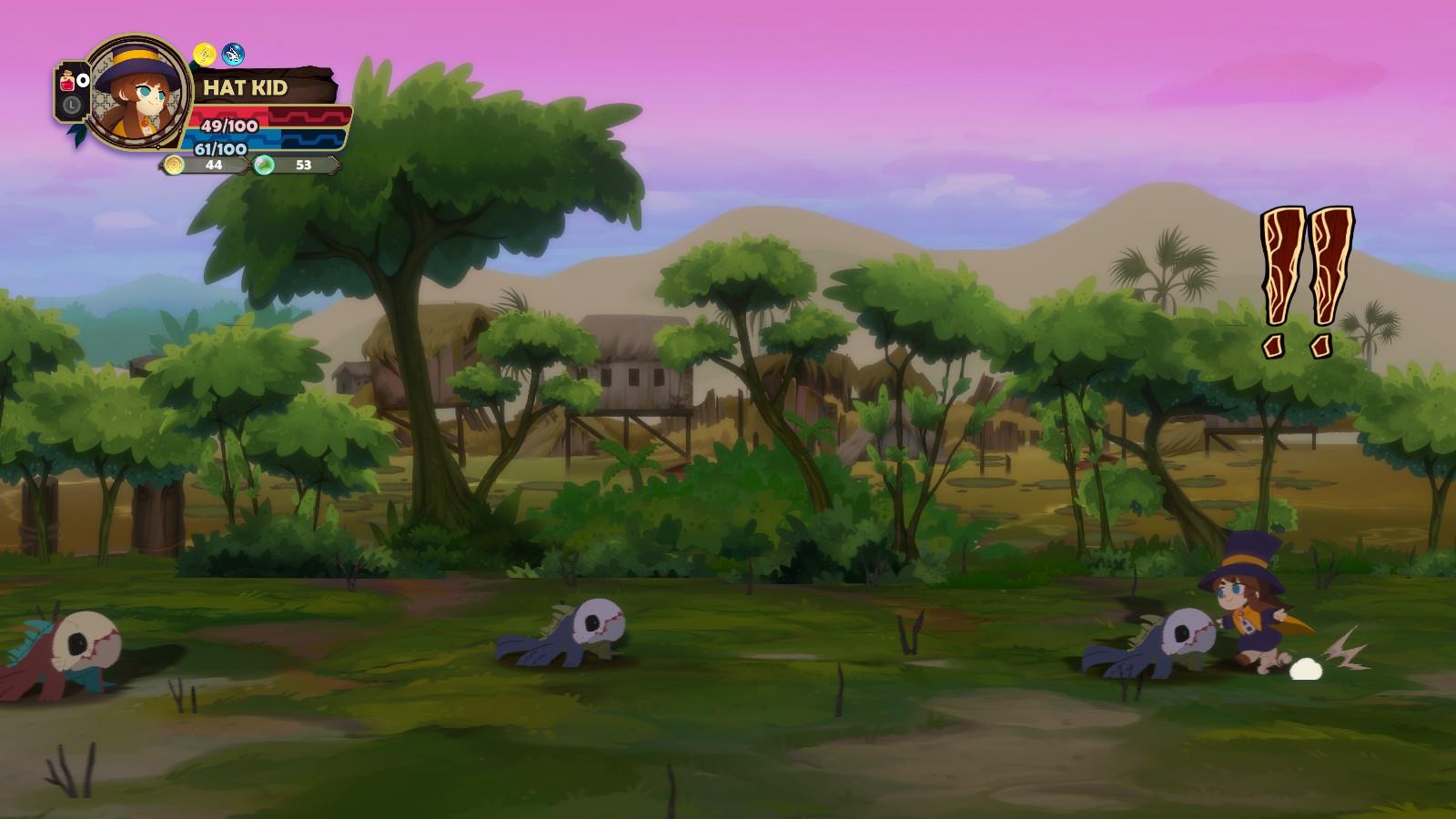 I compared Tunche earlier to games like Vertical Drop Heroes where you make a bit of progress, die, retain some of that progress, upgrade yourself, and then try again only this time a little better equipped for the challenge. While the same can be said about Tunche, here it feels a bit more repetitive. In other similar games, you can reach certain checkpoints so you don’t have to start over from the start of your journey every time you perish unless you want to grind out just a bit more resources. With Tunche, you have to restart from the start from the beginning of the journey every time though it does get a bit faster as you improve your skills. Each character has a couple of basic attacks and a magic attack that consumes mana, and you can spend essence to open up new attacks and combos. In addition, you can unlock new abilities to purchase by defeating bosses that can improve your maximum health and mana. If you have a friend to play co-op with you can level up the characters faster as you’re basically working on two at once. 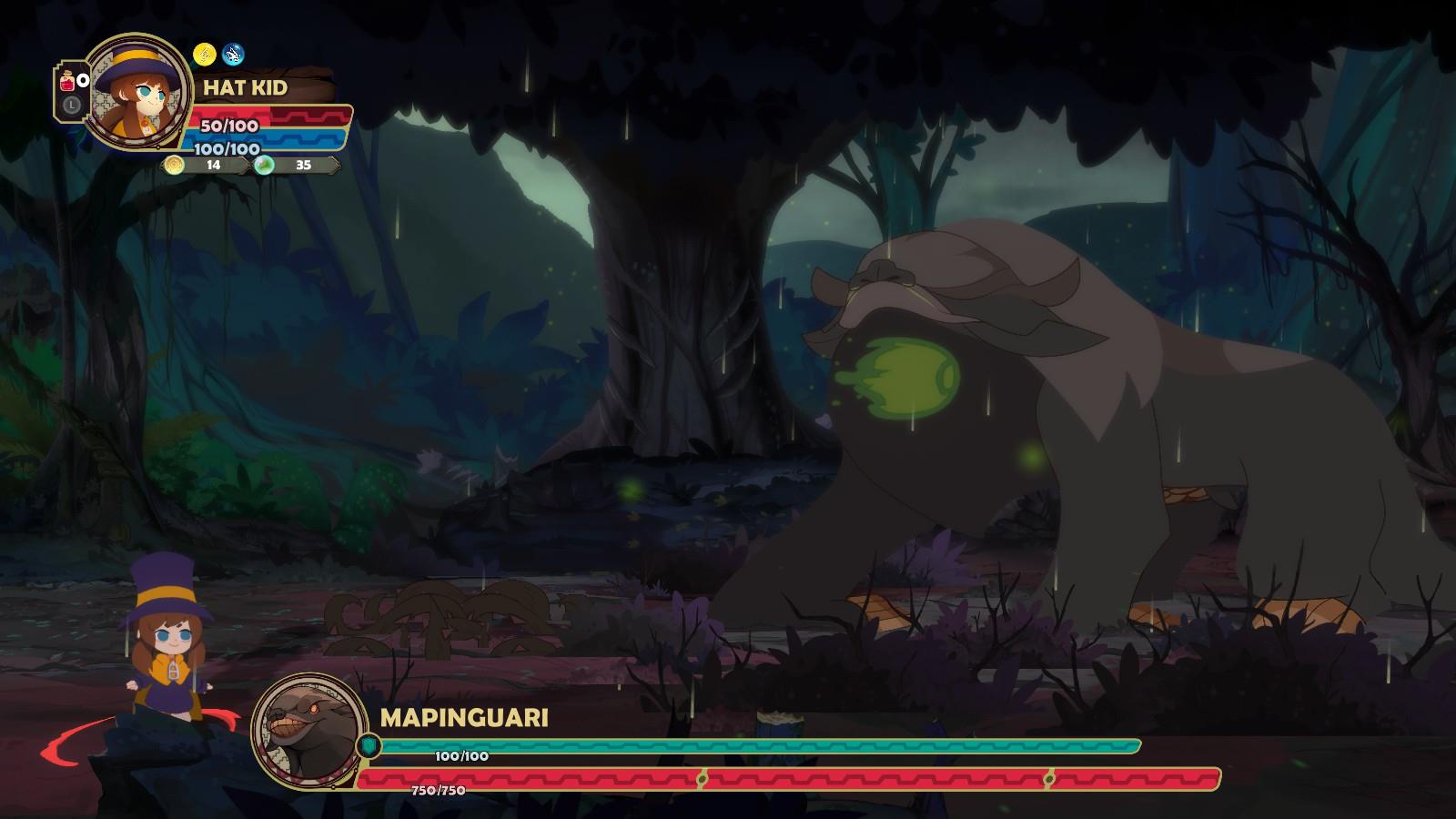 The combat itself is okay, but it can get repetitive early on until you unlock more combo options. You can typically hit the attack button two or three times, plus you’ll learn the ability to launch enemies into the air to extend your combo. The more varied you make your attacks the more your combo rating goes from D all the way up to A and then finally S.  Some core abilities and character abilities depend on getting the rating up to A such as randomly having lightning hit an enemy when attacking them. After a while I unlocked an ability that’s basically two normal attacks and a special attack, then I launched the enemies into the air and did another three hit combo.

Even after learning a few new combos the enemies can be damage sponges even early on, and that’s basically where the repetitiveness comes in: you can mix up your combos but it seems like it takes a long time to wipe out each wave of enemies. It doesn’t help that some enemies can spawn off screen; particularly irritating are monkeys that can throw projectiles from off screen giving you very little time to react. Thankfully, all enemies telegraph their attacks giving you time to move or dodge out of the way, but it still doesn’t take much for enemies to just swarm you rather quickly. 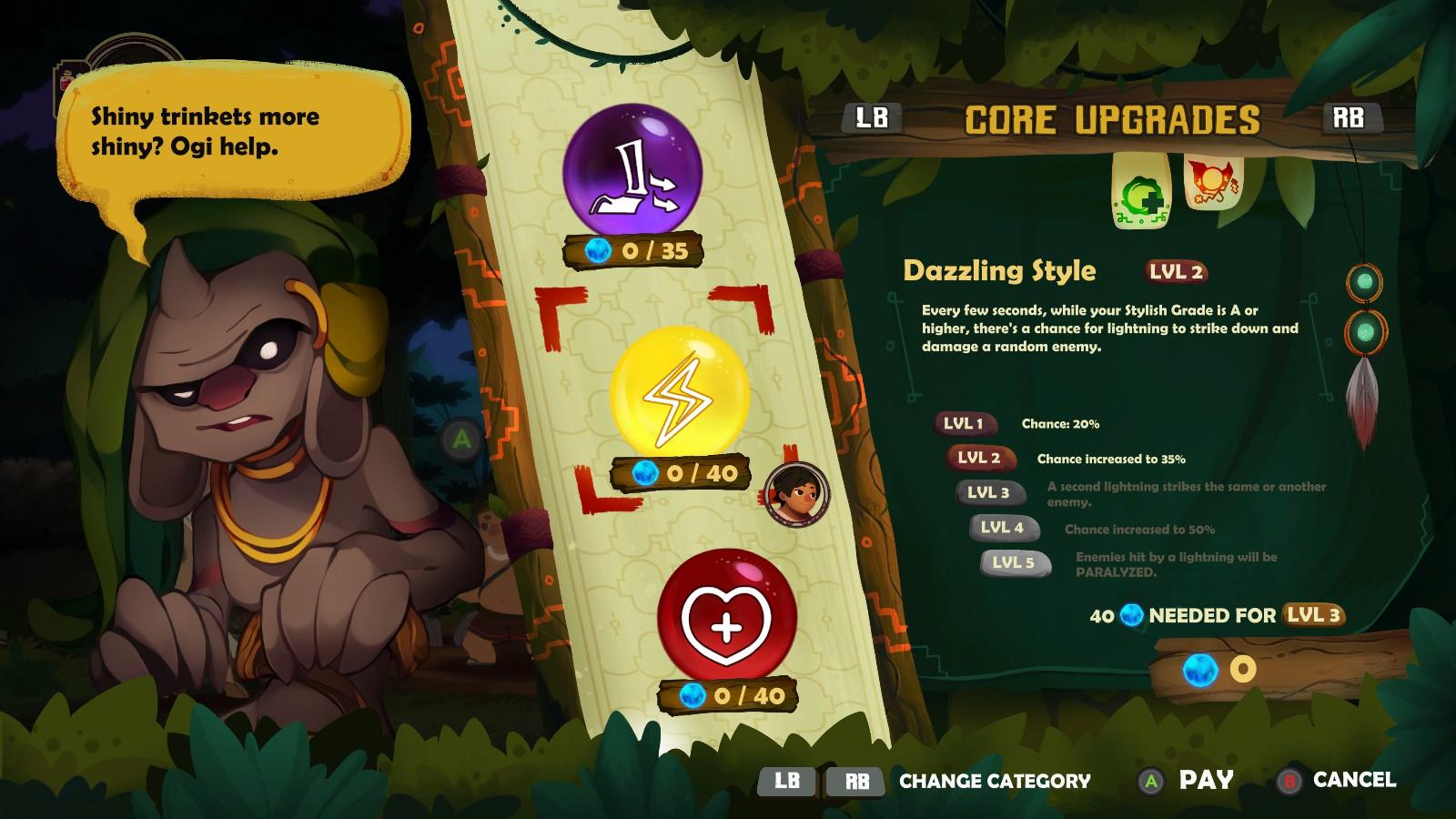 Tunche is an enjoyable game, but it might take some time to get there. Thankfully the art and animation style is really well done and the music is enjoyable to listen to, though that may just be because I’ve gotten so used to the first area’s music after hearing it a lot over time. Once you get going and start to unlock more combos and abilities the game does start to become more enjoyable. Tunche also feels like it lends itself more to co-op as the game becomes a bit easier with more than one person taking on the hordes of enemies that attack you each wave. Plus some special rooms you come across such as mini-games and healing shrines require coins to use and you can pool your coins to share the cost. If you’re looking for a decent beat-'em up challenge and typically play solo, Tunche will eventually get you there.  As long as you're patient, your patience will pay off.

Tunche can be an enjoyable game, but it may take some time to get there.  Early on the enemies can be damage sponges and you don’t have a lot of attack options available, making combat somewhat difficult and quite repetitive.  As you level up each character and unlock new abilities and options for the cores you find, the game itself begins to open up and become more enjoyable.  Tunche looks and sounds great and after some time, the gameplay itself will become pretty good.  You just have to be patient a bit for it to get there.