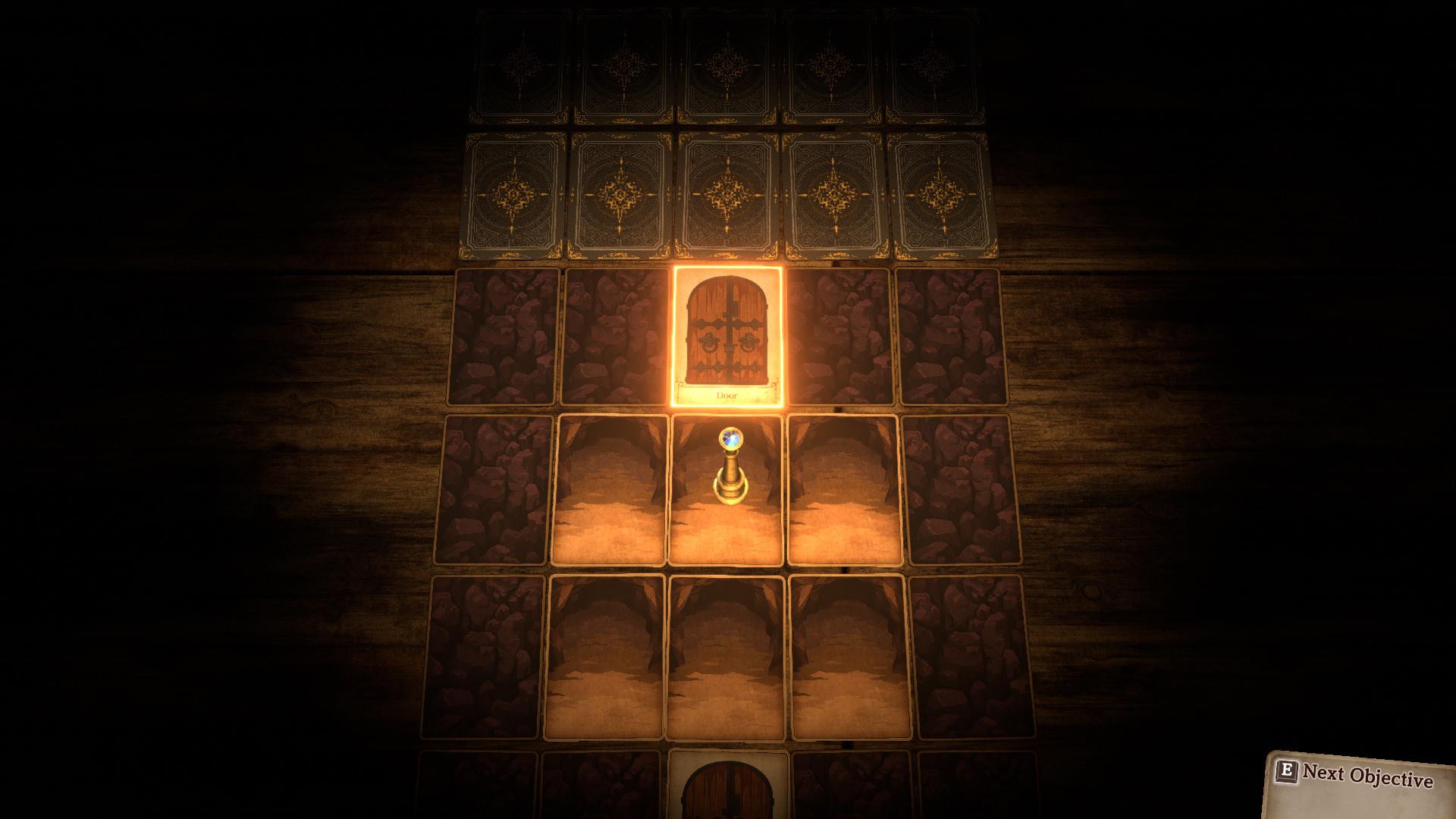 "Square Enix did a card game? I'm in. Send the code." I wrote that in the Gaming Nexus Slack merely 25 seconds into the trailer below. I was already hooked.

Square Enix games were foundational in my childhood gaming life, none more influential than the Final Fantasy series. Collectible Card Games (CCG) are a genre that, while perhaps not the entire foundation, are at least a cornerstone of my present gaming circles. Champing at the bit to experience a Square Enix CCG, things only got more exciting when learning that the actual development team behind Voice of Cards: The Isle Dragon Roars were the same people that created the incredible NieR:Automata. But let's get one thing straight: Voice of Cards is not a CCG.

CCGs follow a format. You collect cards and use them in turn-based battles, typically either running a gauntlet of some rogue-like dungeon or going head to head in a primary PvP-focused affair. The crux of the games are in the combination of crafting a coherent deck, the skill to play the cards at the right moment, and the stark luck required to pull the cards needed from the random draw of the deck. 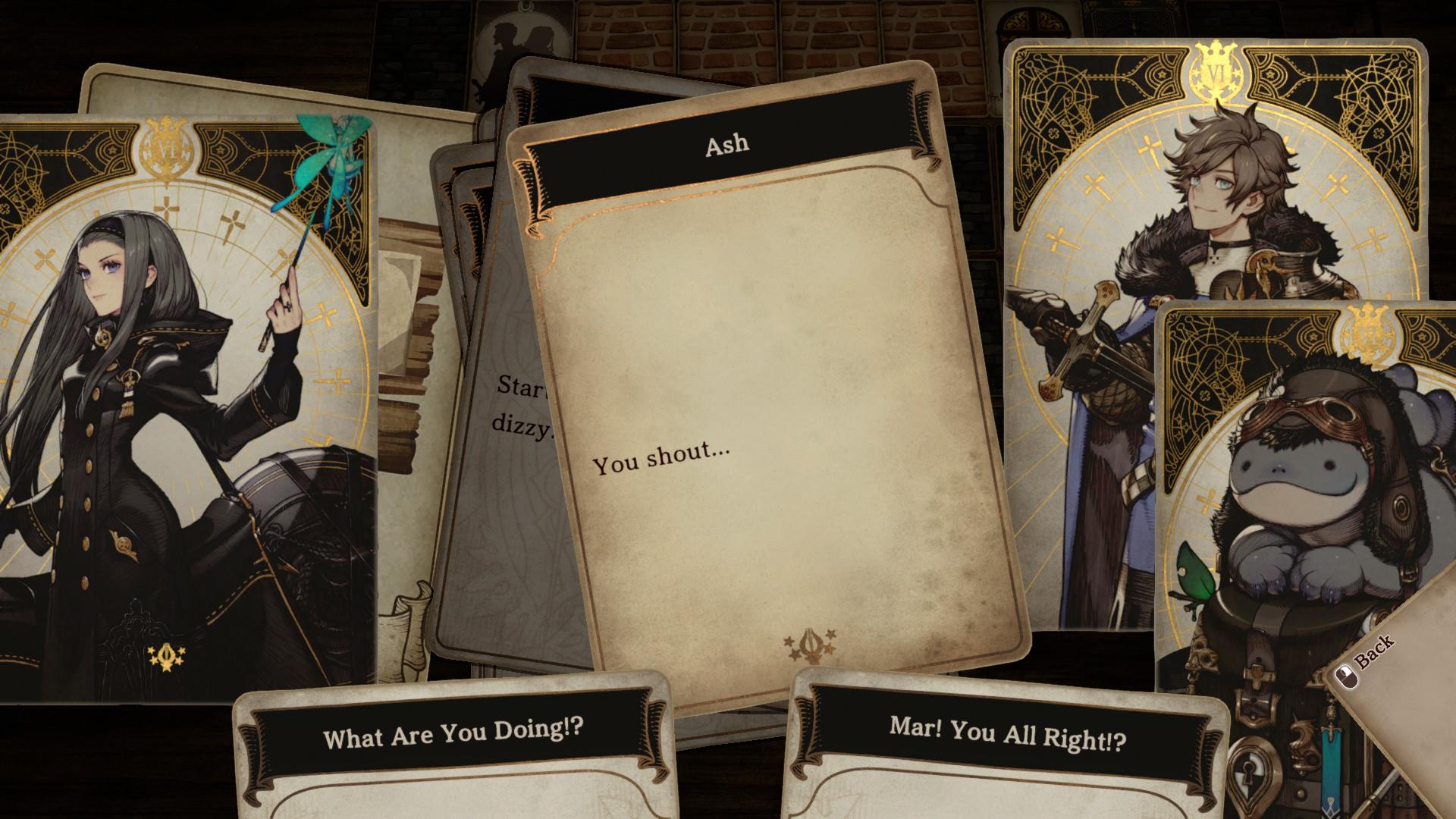 Voice of Cards has, basically, none of this. Voice of Cards is an RPG, pure and simple. It uses cards to create its world. The characters, enemies, NPCs, actions, even the map itself, are all created and animated with cards. But in no way does it adopt gameplay elements of a card game. It's purely a unique presentation style, nothing more.

What Voice of Cards does offer is all of the classic elements of an RPG; and not these action-RPGs that seem to dominate the space presently, but the old-school turn-based Final Fantasy and Dragon Warrior-type RPGs from decades ago. So there was a pang of disappointment initially at the realization that I did not have a CCG in my hands, but there was also that nostalgia of dipping back into a classic RPG as comfort. 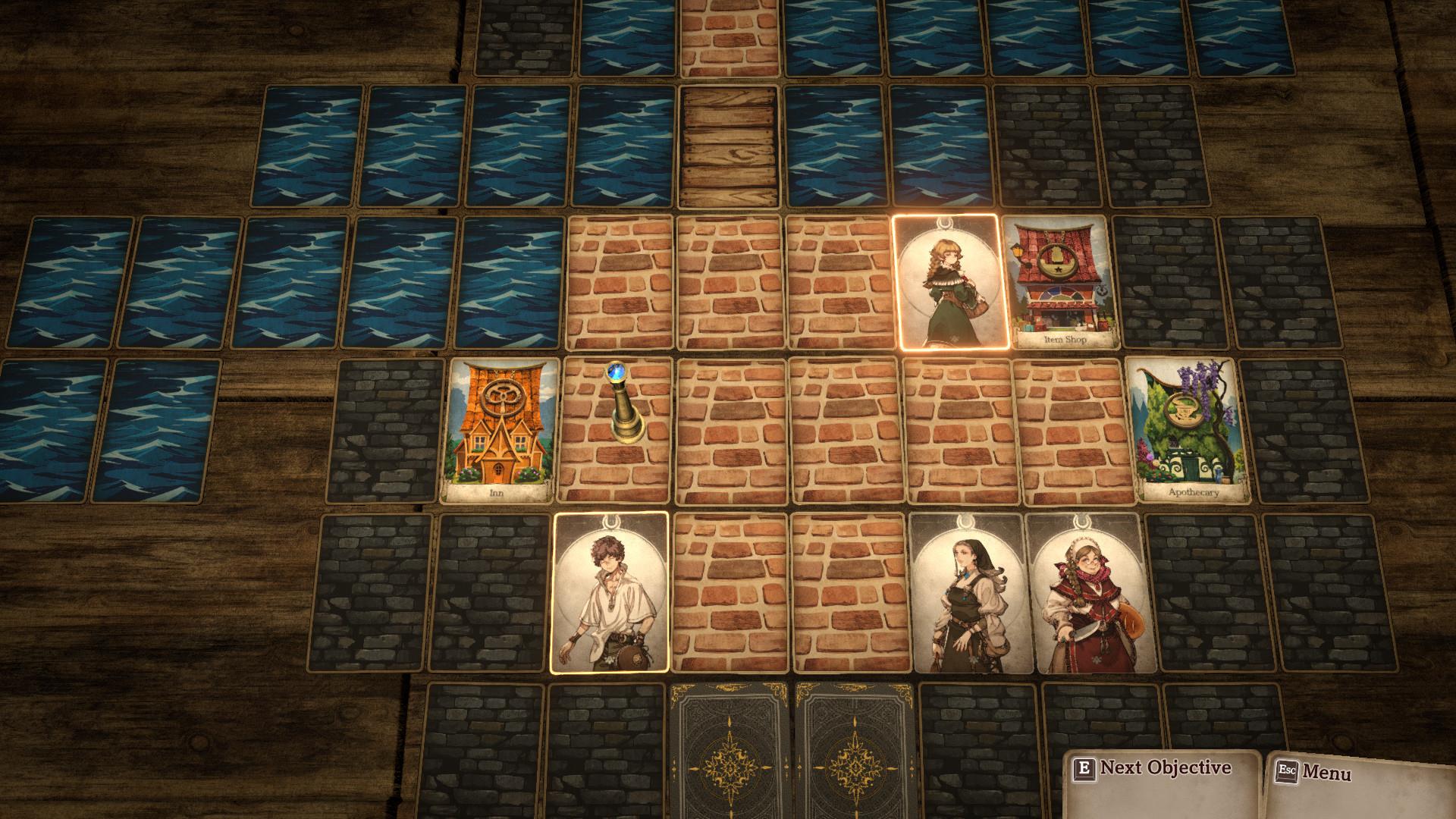 So, put correctly into the context of a classic turn based RPG, how does Voice of Cards fare? A little below average, actually, as it does miss a few tricks. The entire affair is presided over and narrated by the voice of cards no less. The narrator does a fine job and the storytelling is a strength, but at times the pacing can be a bit plodding because everything just about has to be voiced, not shown. The creators get creative with the way the characters are presented in the cards and even the way a little rectangle with a drawing on it can act out its actions, but the voice is left to do most of the heavy lifting. While they constantly deliver a good performance, sometimes you really want to skip through the dialogue quicker than is afforded.

Combat is especially classic. Each character gets a number of actions, some are basic attacks and other more powerful ones require gemstones (think action points) to perform. There is nothing telegraphed in the combat, however. While this creates an opportunity to test a player's memory, it mostly just ends up offering very weak strategy overall. Enemies might be weak to a certain magic, but there is no indication what that might be, other than trial and error and a little big of logic (trees burn, use fire). But turn order in nowhere to be understood. So deciding whether to stick or twist with the current attack is a blind choice when you don't know who is actually going next. Should I kill off this single enemy now or do an area of effect spell where my next hero can follow up with their own and kill them both? I have no way of knowing before the first round whether my second hero is up nest in the order or if that enemy left alive is going to sneak in there next. 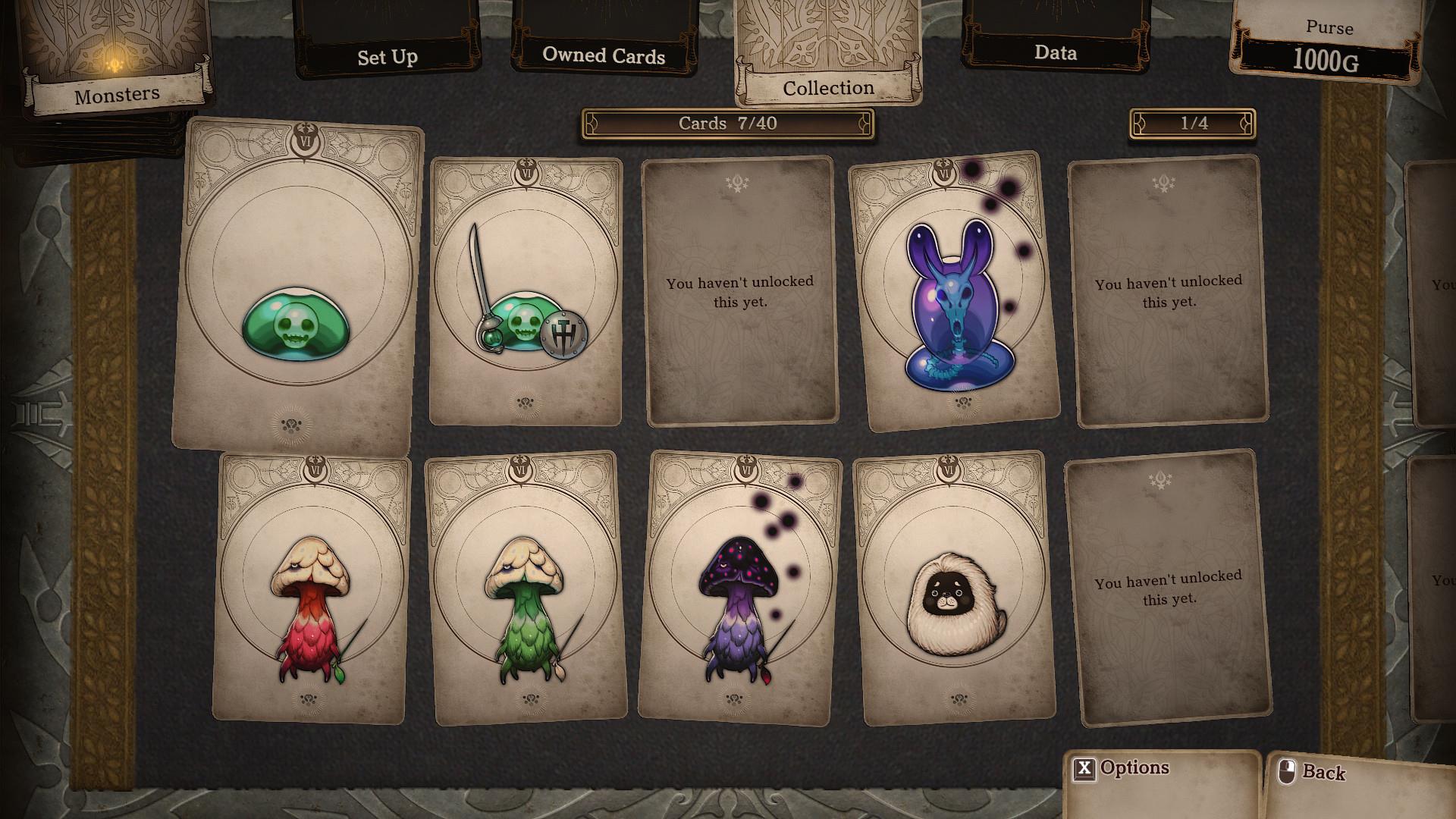 There is also some wonky RNG going on as well. There are misses and criticals on actions that occur randomly. That's all fine. But what doesn't add up is how attack and defense actually cancel each other out. Sometimes an enemy takes more damage than expected, sometimes less, and I couldn't make heads or tails of it because most times it is exactly attack minus defense—until it's not. I saw this plenty of times live and never put my finger on why, but in my notes captured two such events: hitting for 12 attack on 4 defense and still kill an enemy on 9 HP remain, or another time 10 attack on 8 defense only dropped 1 damage...

Dungeons and overworked areas also quickly become rote. The same few combos of enemies with the same few attacks rotate quickly in each area. The first battle or two you're blind, but then it becomes a choreographed set piece to advance. I soon found myself spending an entire dungeon running the same three attacks and wiping the slate clean in every encounter: basic magic strike, spinning ray, roundhouse. Wash, rinse, repeat. Mid bosses provide a small measure of difficulty, but not really anything to sweat over. And then there is a giant ramp up for the final boss that ends rather anticlimactically as the poor opponent AI ends up being your biggest path to victory. You quickly learn the powerful arsenal of attacks at the final boss's disposal and are left aghast as, at the moment when the final blow on your team is possible, they instead choose to level a useless spell against a character immune to its effects. 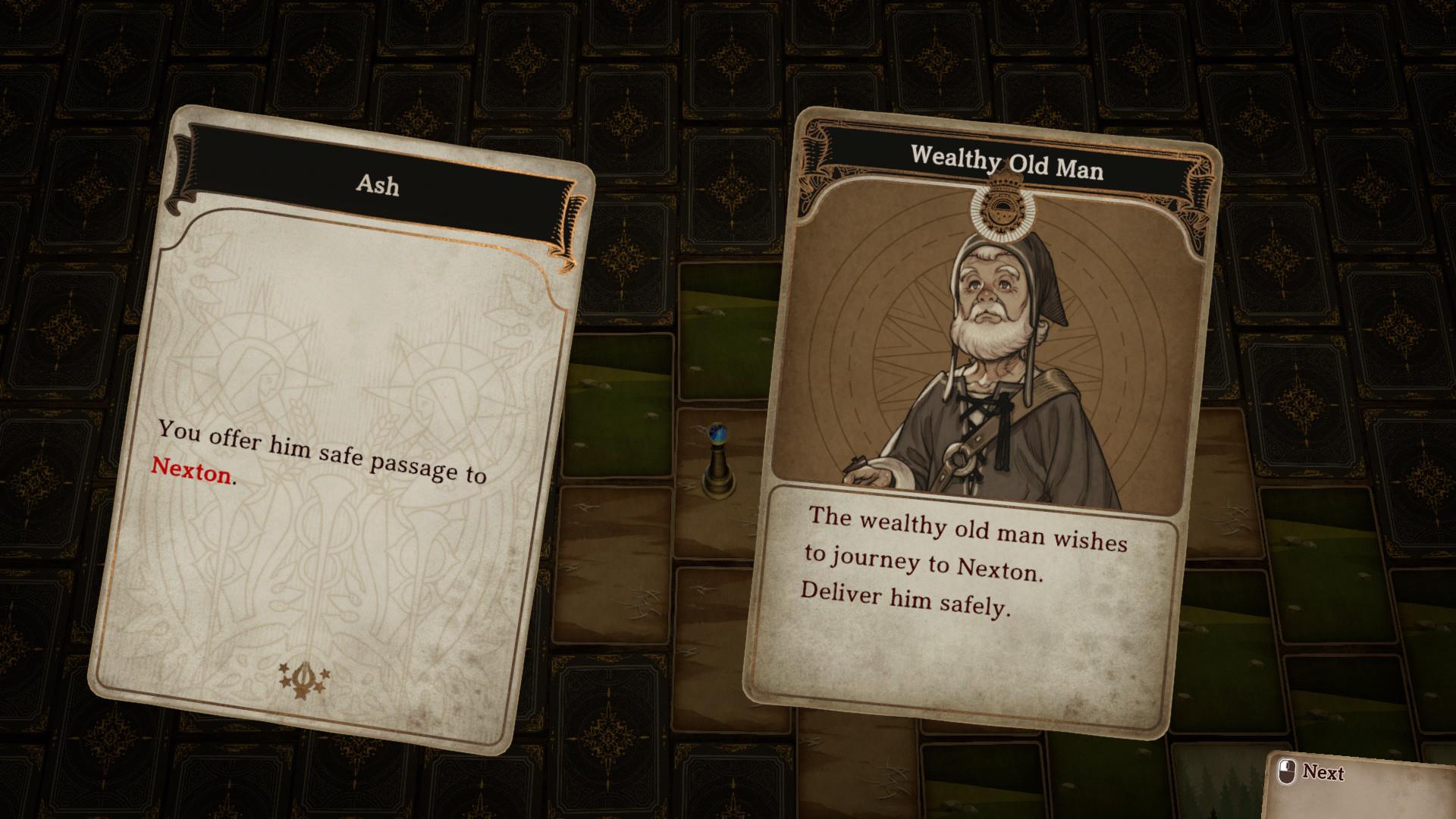 The whole thing just ends up feeling overly simplistic. There is a chest dead center along the only route to the dungeon's end. You can’t miss it and it contains the key to the exit door. Why? Why not search for key along a different route? Why even have a key at all if the chest is unmissable? Who said the door even needed a key? Why just put it in the path? Much of the game ends up feeling like this should be a game for children, easing them into an introduction to the gameplay elements of classic RPGs. After all, the game is chock full of classic RPG tropes: scores of items you never need to use, your backpack full of potions you never need (except for those revive ones in the final battle; hold on to them... they're a lifesaver...)

Each new town has one new armor set with better stats than the one you are wearing. But what the game doesn't have: more than one new armor set, or armor synergies, or loadouts that do anything more than tick the attack and defense numbers up a few notches higher. Ultimately, however, the main storyline dispels any naivety that could lead to the logical conclusion that this is a child's introduction. It takes rather dark and gritty turns that, while I did enjoy as an adult, would be out of bounds in a kid's game. It's not a kid's game. It's just a simplistic one for adults. 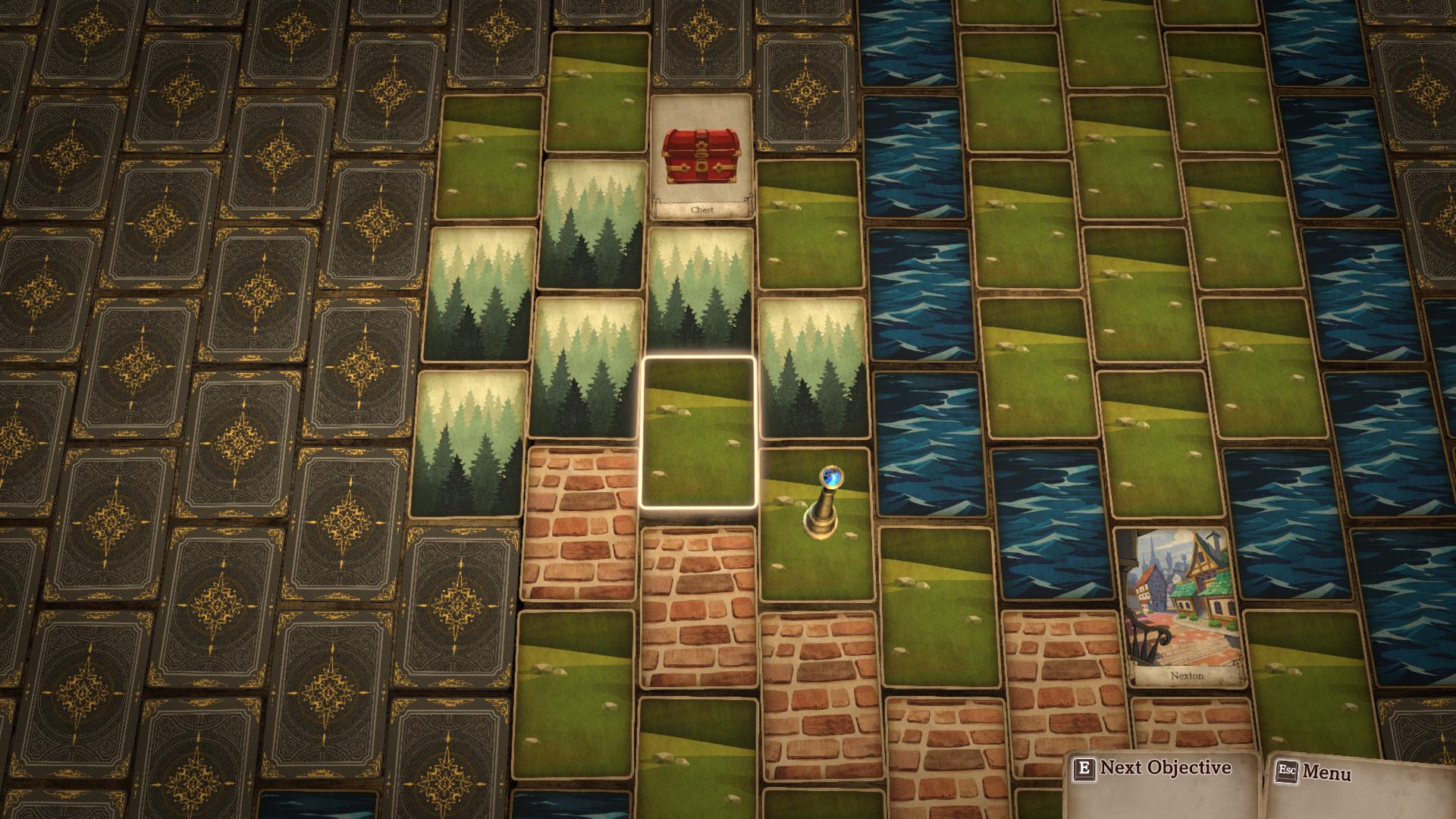 And while that story actually is rather excellent (except for the part where they lean in heavy to that other RPG trope: not being able to remember the main character's past) the characters themselves are extremely functional, but rather unlikable. There are five to chose from to make your party of three at any given time. While their abilities vary and they can be useful in different combos for different scenarios, they are pretty much all a band of weirdos I'd much rather not follow on this journey. I think the attempt was for some comedic purpose, but it falls flat. And even that excellent story, when it's not being ruined by the sad sack of main characters, or the illusion of choice in dialogue options that all lead to same obvious end, ends up getting its best plot twists spoiled a step or two too early by the voice of cards himself revealing too much just ahead of the actual shock.

And then there is the length, the lack of which is probably the biggest betrayal of the classic RPG. Just when things start getting good, just when the characters are reaching redemption of a sort, the end credits roll and it's all over far too quickly. The main campaign can be bested in a weekend. There is a new game plus to unlock any secrets mixed, and the new game plus is actually remarkably clever the way they weave in some NPC elements and even give you a magic ring that can skip all random enemy encounters and only make you fight the boss levels. But I'm am still left to plod slowly through an entire world of content I've already experienced just to try and get 100% progress and some vague promise of a better reward, or maybe even a better ending. 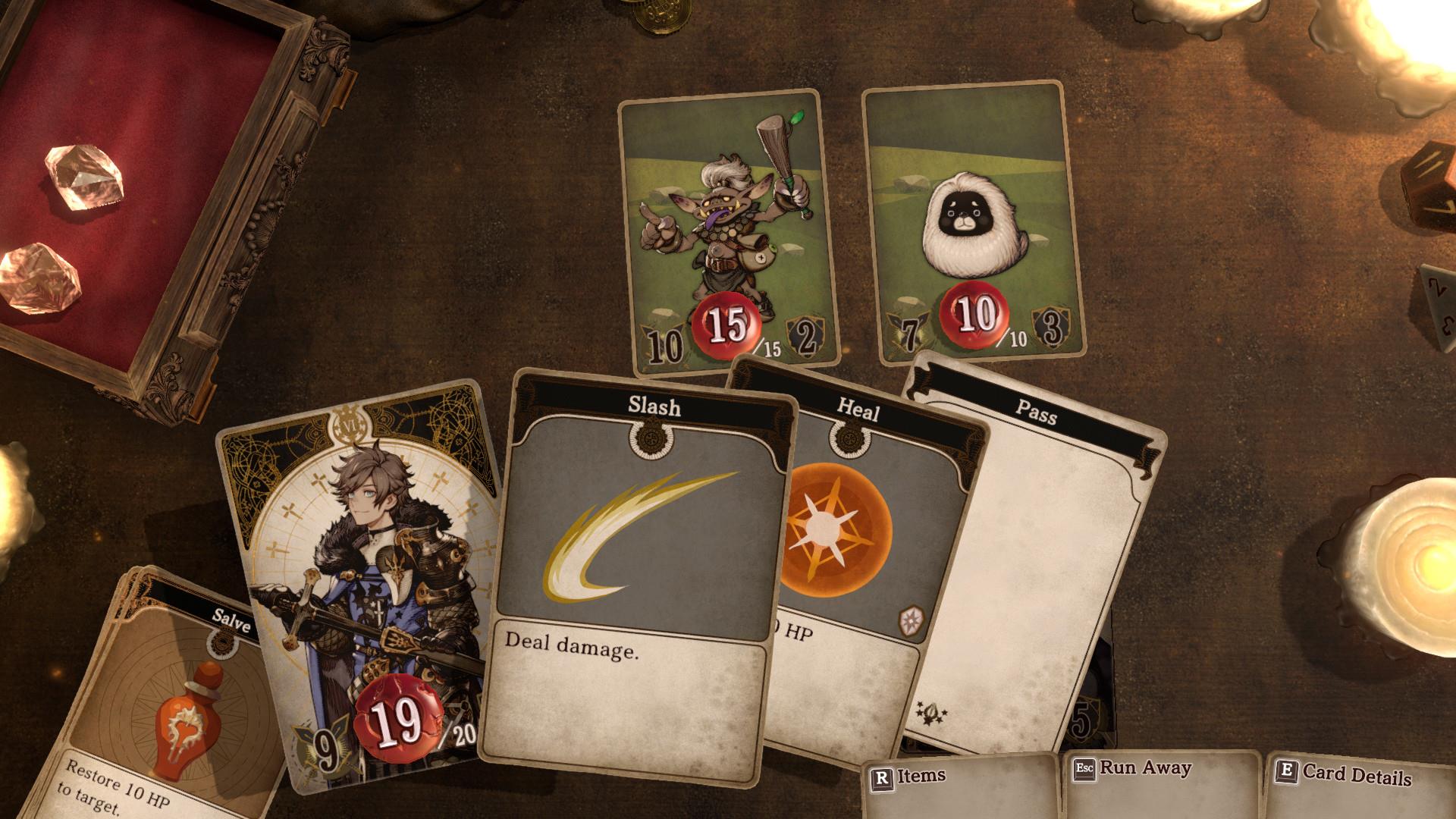 Expedited route to the goal or not, I'm not sure I can be bothered to really even go back to try to slog through Voice of Cards: The Isle Dragon Roars a second time. It's not a card game, it's a classic RPG; but evaluated as a classic RPG, while it does many things right, it is too rough around the edges and runs too shallow to really stand above much in that field.

The Voice of Cards: The Isle Dragon Roars is not what I expected and ultimately not what I wanted. I was hoping for a card game but a card game it is not. It's a classic RPG, simply presented solely in the medium of cards. But even taken for what it is, it falls too short of the running time of a good RPG, fails to deliver the challenge or strategy to make itself stand out in that genre, and tarnishes and excellent story with characters that struggle to redeem their faults.