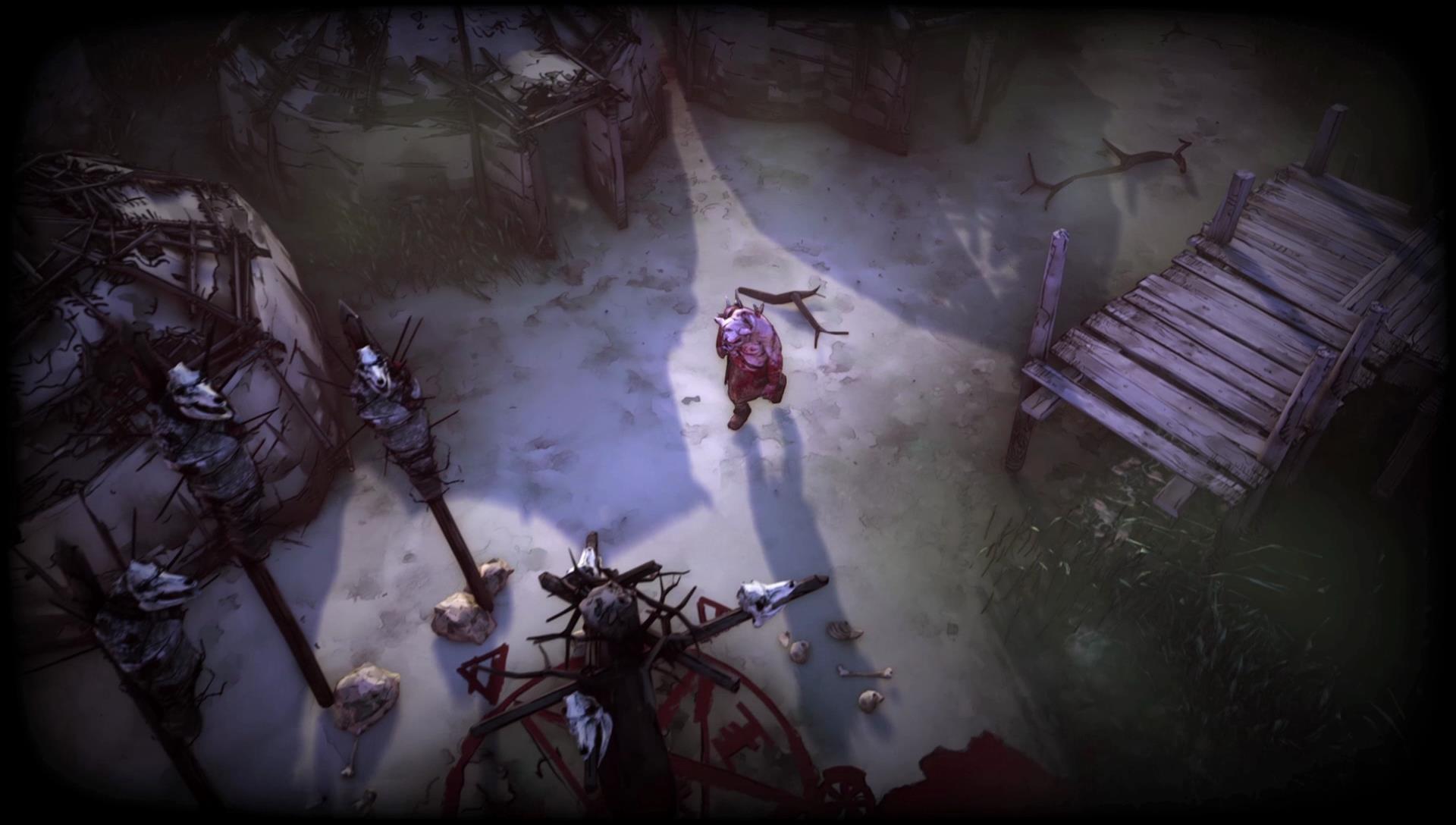 Playing a preview build of Weird West, the new RPG from Devolver Digital and developer WolfEye, I had to keep reminding myself that this was just a preview build. I didn’t need to chase down every little side quest that popped up in my quest log. It wasn’t necessary to hunt every single bounty I found on the board outside the sheriff’s office. I was burning through my time, as I would just need to do all of this again when the final game releases in January, because my save data is very unlikely to carry over. 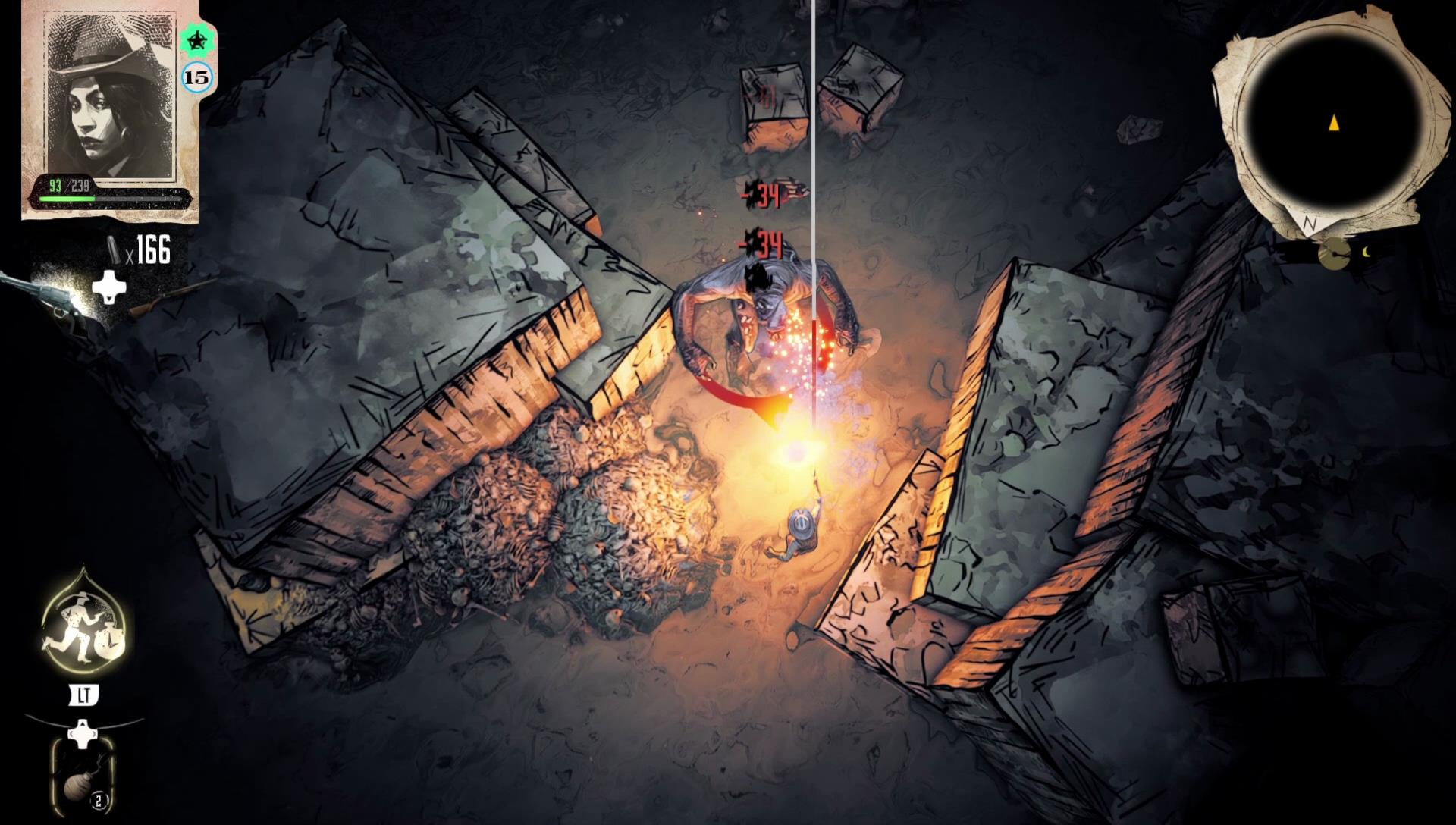 But there I sat, playing through an entire rainy Saturday afternoon, following one wild side story after another, making little deals with myself like, “Okay, I’ll only do three side quests in between each main quest.” Deals that I would completely backstab myself on, by the way. WolfEye estimated that it would take about five hours to play through the provided content for the preview version I was playing. I’m not going to admit how many hours I put into this build, but it was more than double what was predicted, and I’m still not done. Weird West has some hooks.

I referred to Weird West as an RPG in the opening paragraph, and it is, but I don’t want to give the wrong impression on the type of game this is. More than anything, Weird West reminded me structurally of the recent Wasteland titles. Players move from site to site on an overhead map, with travel being indicated by a little icon sliding across the countryside. Upon arrival at a location, the game shifts to a top-down isometric view of your destination, and the player takes control of their character and gets down to business – whether that business is exploration, assassination, negotiation, or an all out brawl with pig-men (pigilation?). 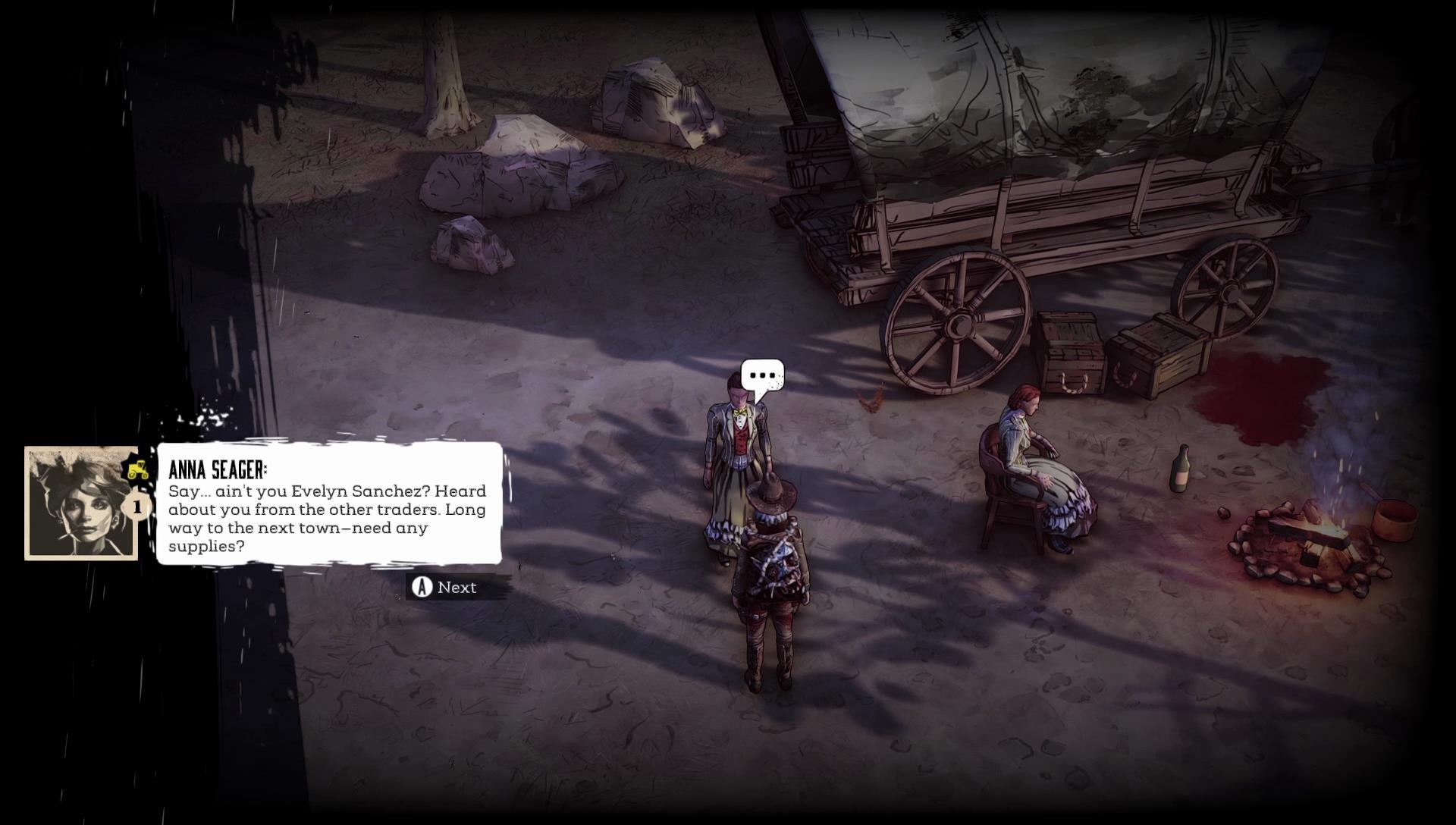 The final build of Weird West will include five very different storylines. My build of the game only included one of these – the Bounty Hunter story – but this subsection of Weird West felt so rich and full that it left me as satisfied as a full game. My guess is that the full game will provide between 20 and 50 hours of playtime, depending on just how deep you are willing to go.

To keep things as spoiler-free as possible, the Bounty Hunter starts the game in retirement at her homestead, where she is eking out a meager living with her husband and son. As the game opens, bandits raid her farm, killing the kid and kidnapping the husband. Little did these dummies know that they were awakening a slumbering beast, as the Bounty Hunter had buried her guns in the backyard when she retired, but you know…she has shovels. 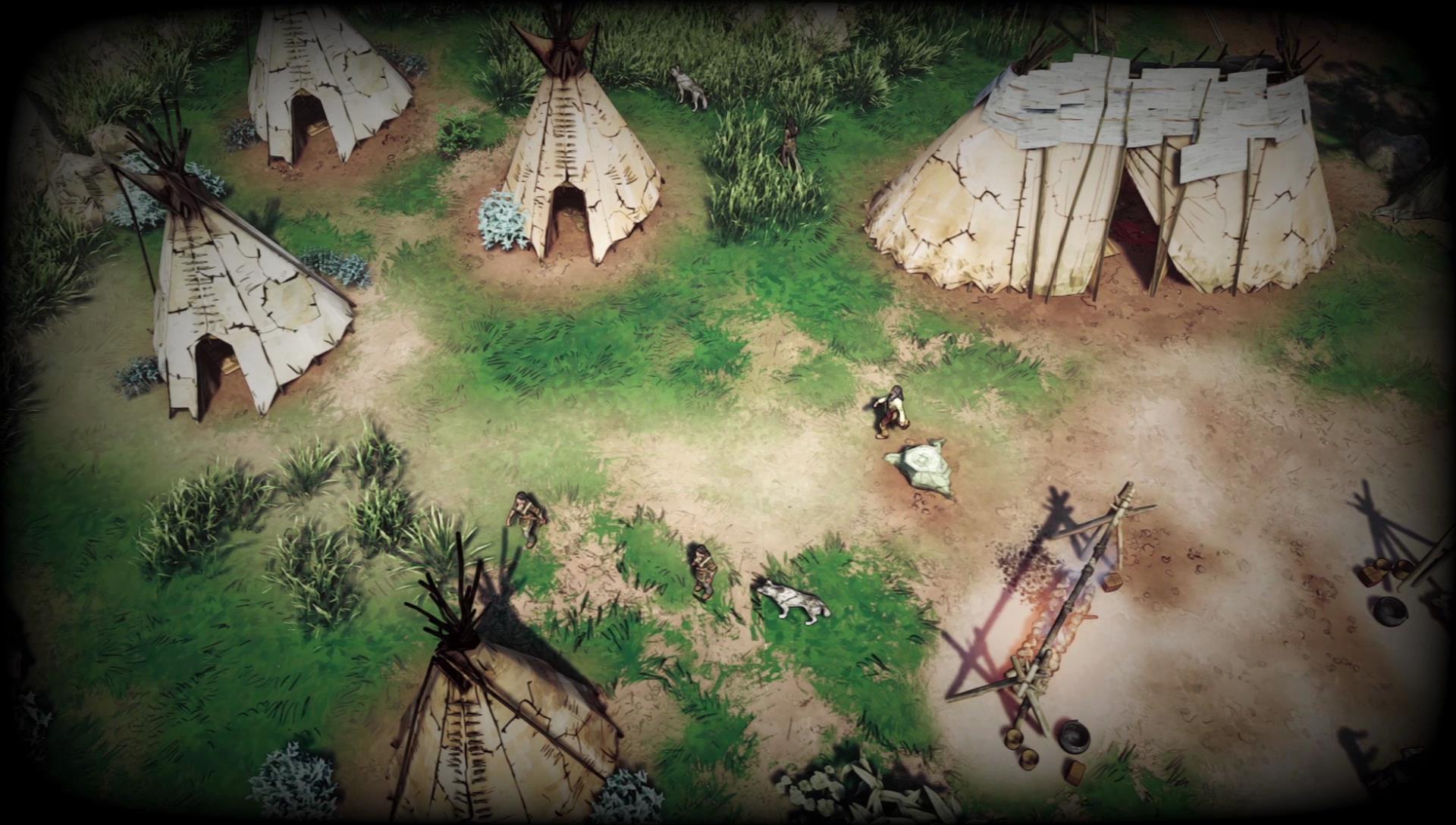 Before long, the player is moseying through the Weird West in search of the fools that took her husband, and man, weird is an understatement. I won’t spoil who kidnapped her husband or why, but I will say that there are repeated insinuations that he is being moved around by his captors with a few other folks, collectively known as “the good meat.”

Along the way, the Bounty Hunter encounters any number of weirdos and gets pulled into a bunch of wild side stories – some of them weird, some of them just good western scenarios. I found myself cringing every time the load screen appeared, as I never knew what crazy stuff would be waiting for me when the load finished. This time, it’s a simple coyote attack. The next, it’s some crazy lady that wants me to carry around a mysterious box (“But don’t open it! Never open it!). The next, it’s a gaggle of nightmare creatures that want to chase me around in circles while I burn through all of my ammo taking potshots at them. 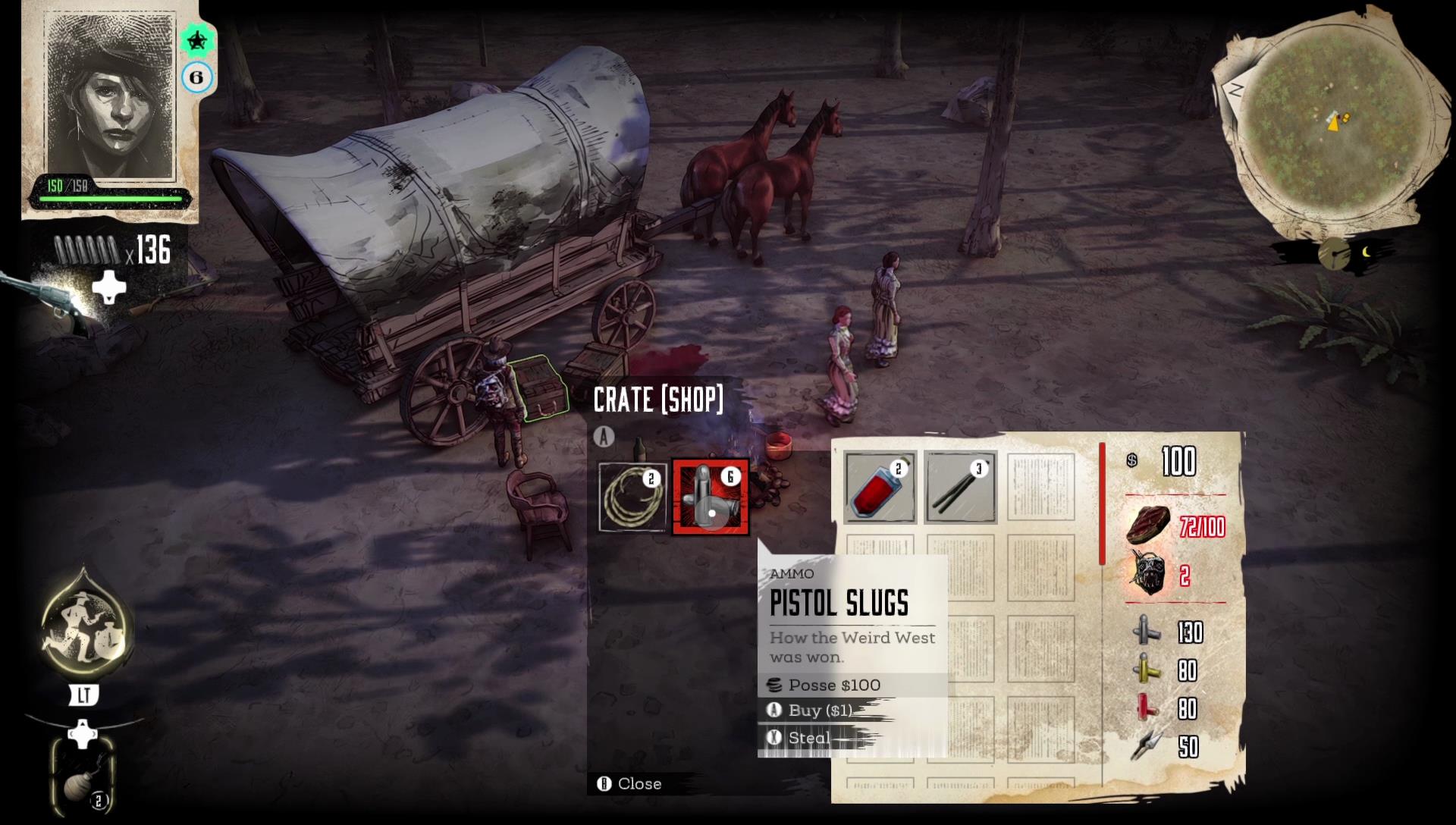 Combat is handled very well with twin-stick mechanics. A tap of the left stick puts the player into stealth mode, which is very effective in clearing out a crowded area – choking dudes out really helps thin the herd before a fire fight. You can also recruit or hire helpers, characters that will follow you around and assist when the going gets tough, which is fun. Don’t get too attached though, because these folks don’t exactly have strong constitutions.

Every action the player takes results in rewards. This is a game absolutely overrun with loot, and before long the player will be picking and choosing among a ton of viable weapons. For those interested in buying legitimate weapons (as opposed to stripping them off of corpses) Weird West offers the player open-ended earning potential, whether that’s through selling junk at the general store or taking on delivery missions or bounty hunts. 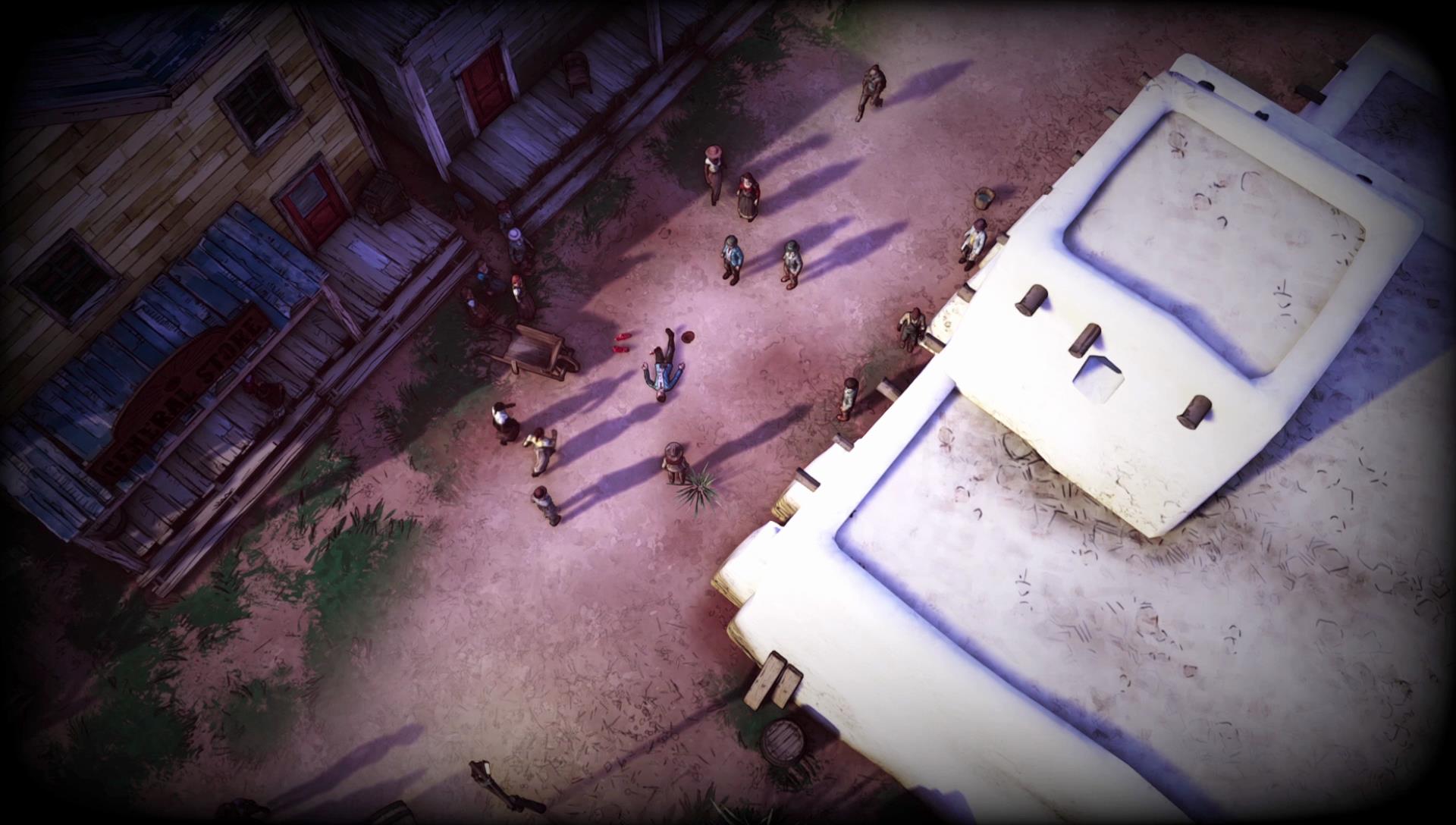 I was shocked at how much content is available in just this small slice of Weird West. As I mentioned at the beginning, I had to eventually pull myself away from the game before I ruined the final release for myself. This game absolutely upholds Devolver’s recent run of quality off-beat hits. By everything I've seen, Weird West is just so cool, and I think I have barely scratched the surface. Fans have a lot to look forward to when Weird West drops on January 11, 2022, and I’ll be right there with them, popping off shots into pig men.