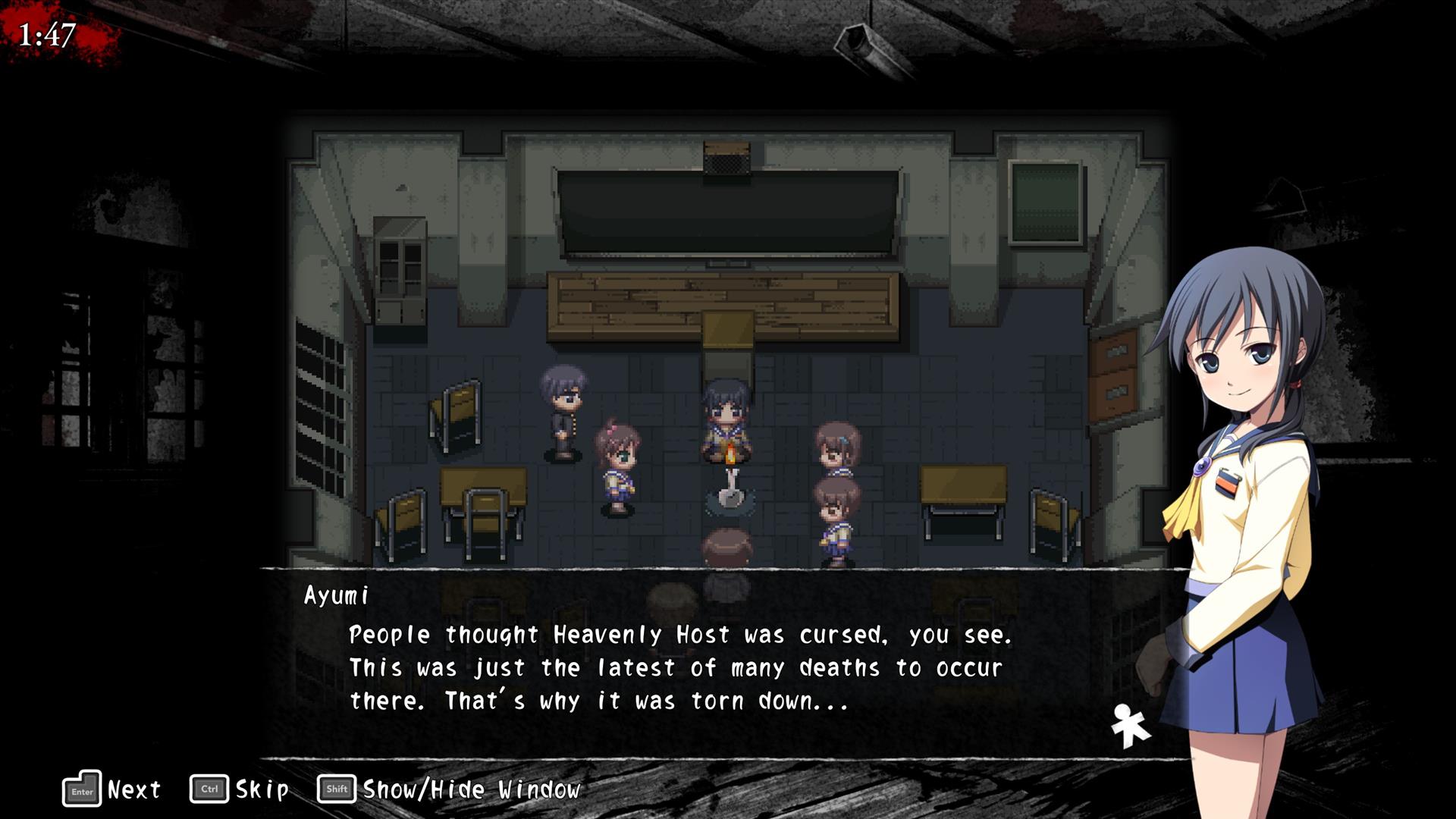 Corpse Party is one of those games that has been remade so many times that it would be inappropriate to not deem it a cult classic. It’s also quite confusing to keep track of all the differences between the handful of re-releases. The first original Corpse Party was developed with RPG Maker and released for the PC-9801 in 1996. Since then, there’s been 2 remakes, Corpse Party Blood Covered for Windows PC in 2006 and Corpse Party Blood Covered: Repeated Fear for the PSP in 2010 and iOS in 2012. Now developers XSEED decided to release the complete definitive edition for all consoles and PC with Corpse Party 2021, which contains all previously released content, enhanced character portraits, full Japanese voice acting, 3D binaural audio, and 2 extra chapters.

For those unfamiliar with the series, Corpse Party is a pixelated survival horror doujin soft video game that also contains visual novel-esque features. This re-release of the first entry in the series is played through 5 chapters and 16 bonus episodes. The game centers around a group of high school students who get mysteriously transported to Heavenly Host Elementary after a friendship ritual goes wrong and an earthquake hits. The group is split, with some injured from the earthquake and some scared after the discovery that they are no longer in a world that they know. Heavenly Host Elementary used to be a school that was built in the same exact spot as the protagonists’ high school, but due to mysterious disappearances and other supernatural events, the school was closed and demolished. Now, the protagonists find themselves trapped in this haunted elementary school that was only spoken of in urban legends.

Each chapter is played from the perspective of a different subset of the main characters as they discover the truth about the school and find a way to escape. It’s not long before each group of characters find out that the school exists across several planes and dimensions, and that even though their friends are also at Heavenly Host, they are in a different time and space. I’ve never played the original Corpse Party, so I wasn’t too sure what to expect given that this is a horror game but with pixelated and anime-esque visuals. It turns out that Corpse Party meshes seemingly innocent illustrations with scary narrative writings extremely well. Even though it’s 2021, the pixel art graphics do not seem outdated and fit quite well with other indie games of similar style today.

I’ll just come right out and say it. Some of the writing is straight up messed up and grotesque. Spirits of murdered children stalk you, dead skeletons are scattered around the floor, someone’s guts are flung onto a wall, and a note on cannibalism is discovered. The plot is filled with twists and turns, diving into the insanity of the main characters as they tread the halls of Heavenly Host Elementary. XSEED does try and inject some lighthearted humor that can be appreciated in Corpse Party as well, with the occasional “I need some butt lotion” and “you have some nice baby-bearing hips”. It didn’t seem the most appropriate, but then again, nothing is appropriate in Heavenly Host Elementary. 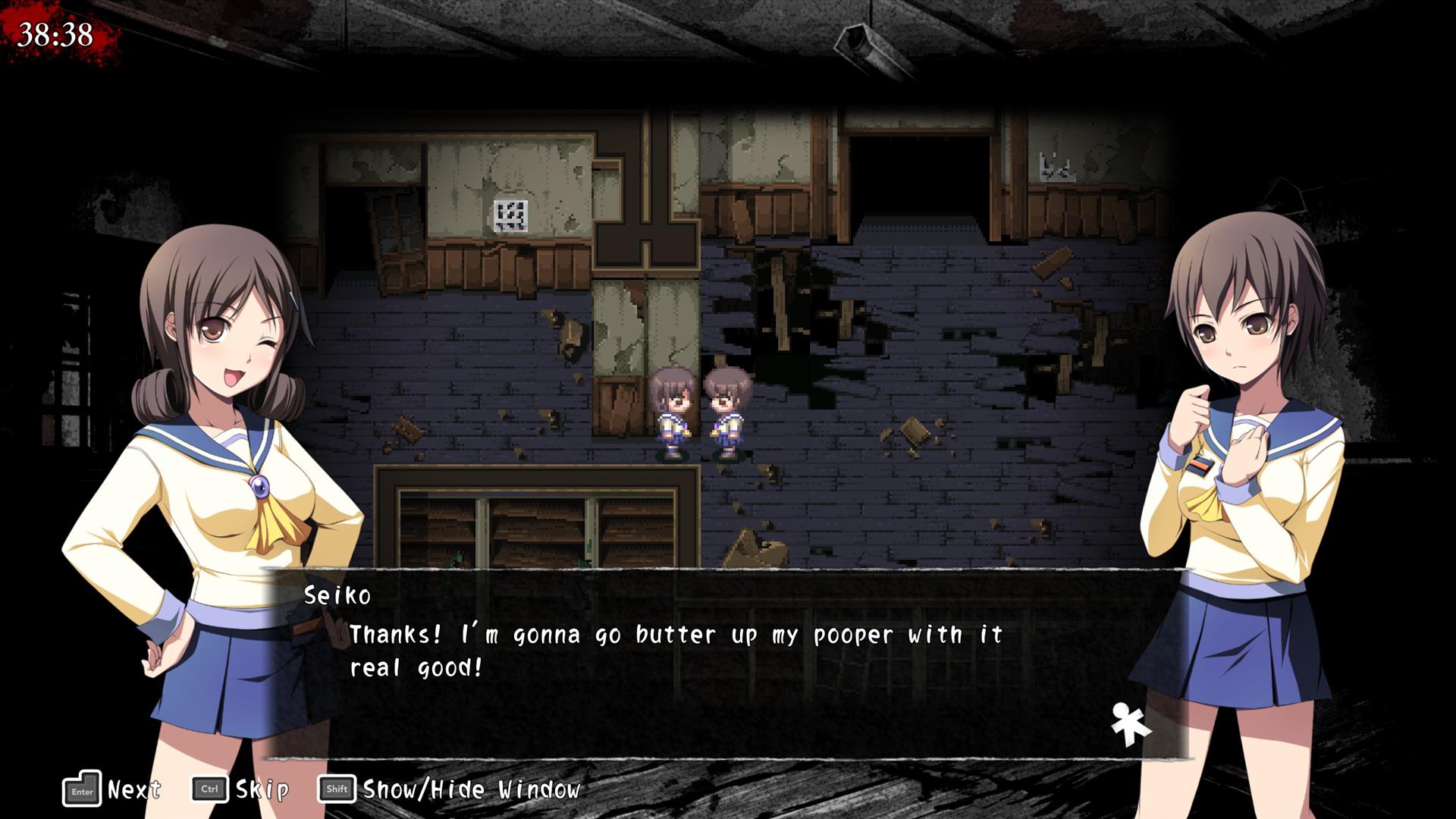 Gameplay of Corpse Party contains searching the environment for clues, items, and lore. There is the occasional puzzle solving and light combat, but given that it is a narrative driven game, there is a lot of dialogue. Dialogue is fully voice acted in Japanese and is done exceptionally well. XSEED also made it convenient to skip through the dialogue if you wish to do so. The background music does more than just set the environment and mood, but also cleverly institutes fear and chills down my spine. Certain dialogue scenarios have branching choices that lead to different outcomes and endings. There are “wrong choices” in Corpse Party, as saying or doing the incorrect thing might lead to a character’s premature death, and ultimately a Wrong Ending screen will appear, forcing you to restart from a previous save.

There’s a surprising amount of character development in Corpse Party, as each chapter focuses on a few characters at a time. While playing as a particular character, you often get a glimpse at their personality through the way they talk and react to situations, but sometimes also a bit of their background through flashbacks. Many of the characters you undeniably get invested in can and will die in Corpse Party. Certain objects you see in the perspective of one character were actually put there or occurred in parallel with another character, contributing to the immersion of the “different dimension” factor. 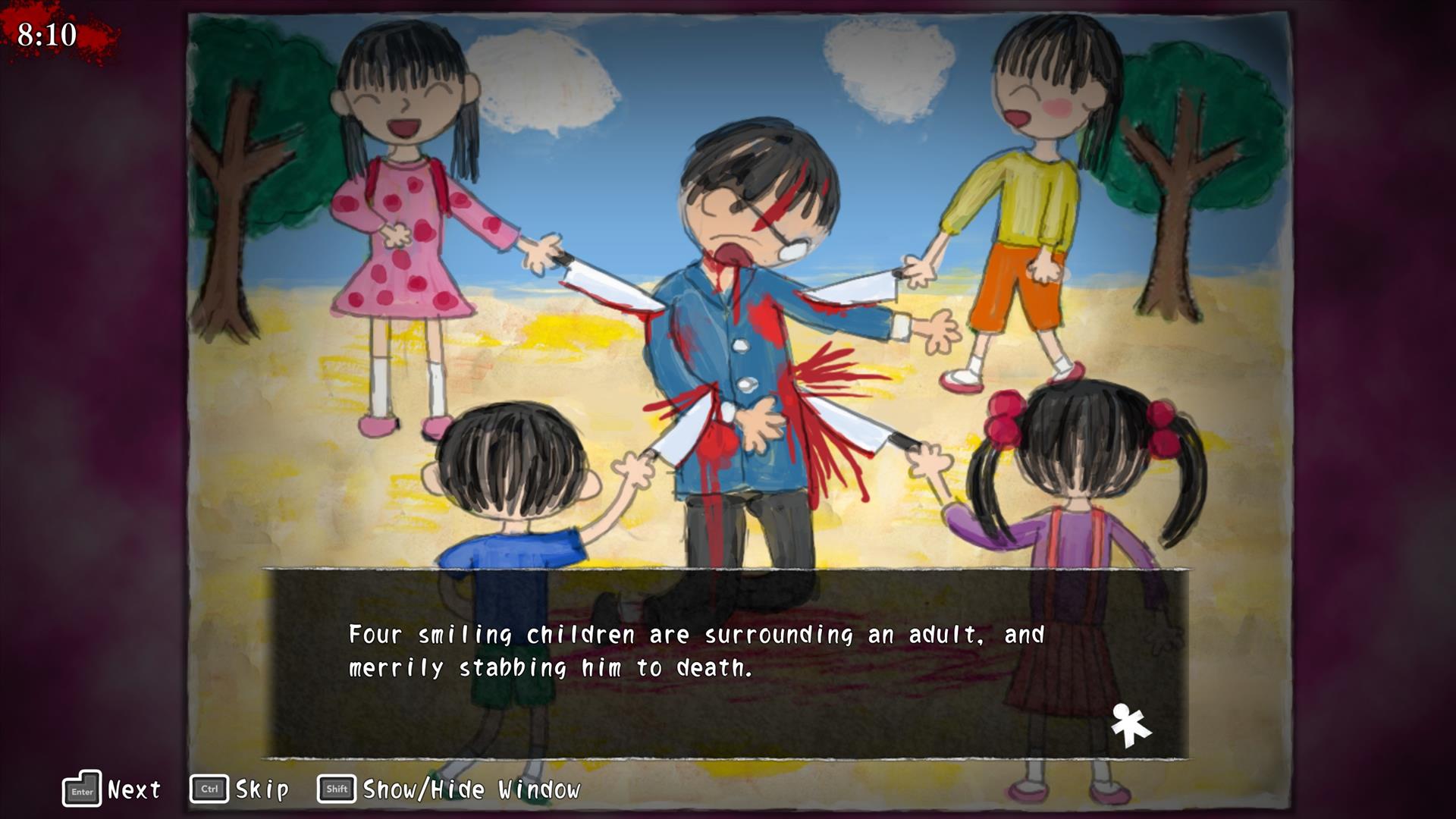 Given that this game was originally created over 20 years ago, there can be some slack cut for design choices and gameplay elements. Corpse Party 2021 is indeed a faithful re-release of the original, with none of the original content changed. However, these grievances still need to be mentioned and talked about. The previously mentioned “wrong choices” can sometimes be more frustrating than refreshing given that you might run into them more than a handful of times. Most times, these choices that result in a character's death come out of left hand, without any warning or expectation. Map design and layouts all utilize reused assets, but understandably so considering the setting is in a school. Most characters tread the same maps as well, forcing you to revisit previously visited areas with a new set of characters.

The game comes at a very generous price point, at $19.99, compared to the $29.99 when it was re-released in 2016 on the Nintendo 3DS. Corpse Party 2021 is definitely the best way to experience the first entry in the franchise that is considered one of the best indie horror games. The game probably does not warrant enough new content and improvements to play through again if you have already played the previous releases, but this is definitely the way to go for newcomers. It’s amazing that a game released in 1996 can still be at the forefront of the indie game market today. The high quality of writing and voice acting, in addition to the extra content and enhancements added, make Corpse Party a must have and a must play for all horror fans.

Corpse Party 2021 is the definitive way to play the first entry in the Corpse Party series that made its rounds over 20 years ago. This game is a must have for horror fans, especially now that Halloween is coming up around the corner. Just keep in mind that there are some frustrating design elements that accompany what is otherwise an impeccable, immersive and frightening story.