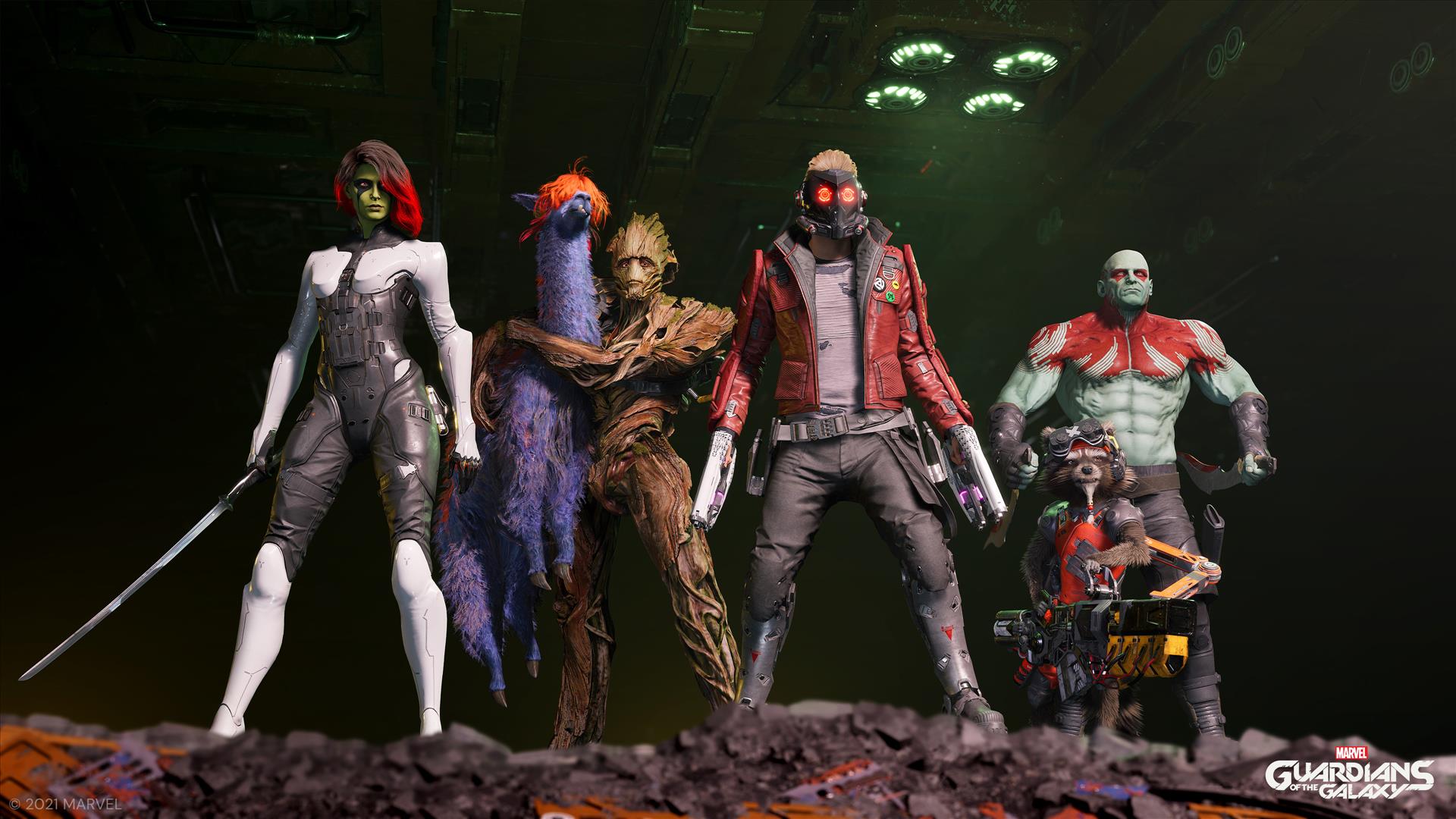 Guardians of the Galaxy

Guardians of the Galaxy made me laugh out loud – many times. The writing in this game is some of the best I’ve ever seen, and the banter between the different group members flows naturally throughout every moment of the game. At one point, Drax makes some sort of crack about Peter Quill’s mother, and Rocket snorts back laughter, muttering, “It’s funny because his mom is dead.” This was so unexpected that my bark of laughter made seltzer water shoot up into my sinuses, turning me into a hacking, snorty mess. This is a game that knows its characters, and goes all in on the humor, heart and foibles that the Guardians are known for, not holding back in the least on their darker impulses.

To be clear, these are the comic book Guardians of the Galaxy, and though they will surely be recognizable to fans of the MCU film franchise, some characters hew more closely to their cinematic counterparts than others. Rocket, Drax and Groot, for example, walk the line between the ways they are represented in both mediums. But Gamora is looser in this game than in the films, quicker with a quip, and more prone to moments of strong emotion. Frankly, she’s more fun. And Peter Quill…well…though I eventually became accustomed to the way he is represented in this game, it certainly took some time for me to get on board with the performance—which is far more “Owen Wilson/whiney surfer guy” than “quippy leader.” If I had a nickel for every time he says, “Guys! Come onnnn!” then I would have a lot of nickels. 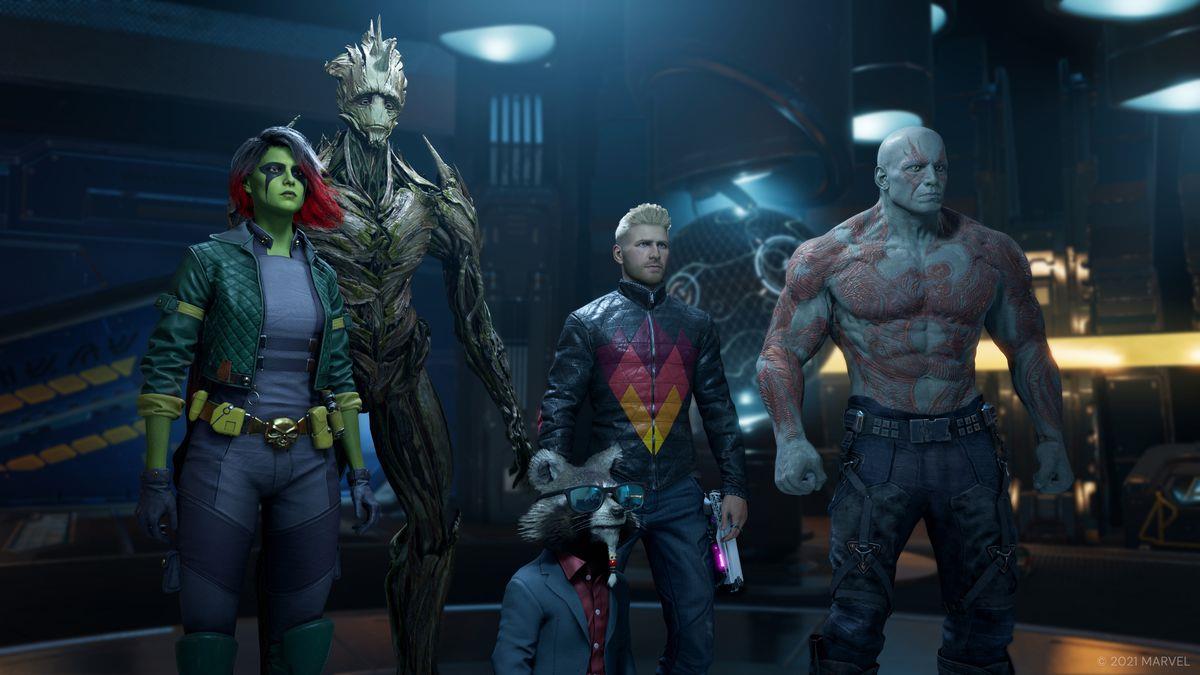 But regardless of the performances’ adherence to the characters as portrayed on film, the events depicted are definitely drawn from the comic book’s storyline. The Guardians regularly reference events that never took place in the MCU, though not so much that casual fans will be lost. And once the story kicks into high gear, thoughts of the MCU will disappear from players’ minds, as these video game Guardians are more than capable of delivering a story of twists, turns, and unexpectedly complex emotion. This is a game that had me looking forward to the next cut scene, as opposed to rolling my eyes every time one started. The character work in this game rocks so hard that it easily rivals that found in the films. (Special shout out to Mantis, who—as a standout among an incredibly strong cast—totally owns the screen every moment she is on it.)

The story in Guardians of the Galaxy definitely comes early in the team’s career, a time before the bonds between them were set in stone. The team has been assembled, but they don’t exactly trust each other yet. Indeed, towards the beginning of the game, Drax the Destroyer regularly refers to Gamora as “The Assassin” and “The Betrayer,” and dismisses Rocket constantly by calling him “The Rodent.” Though the Guardians of the Galaxy will always be made up of strong personalities, the team as shown in this game is constantly on the verge of splitting up. When Rocket gets mad and walks away, the player is left with the feeling that he fully intends to stay gone. 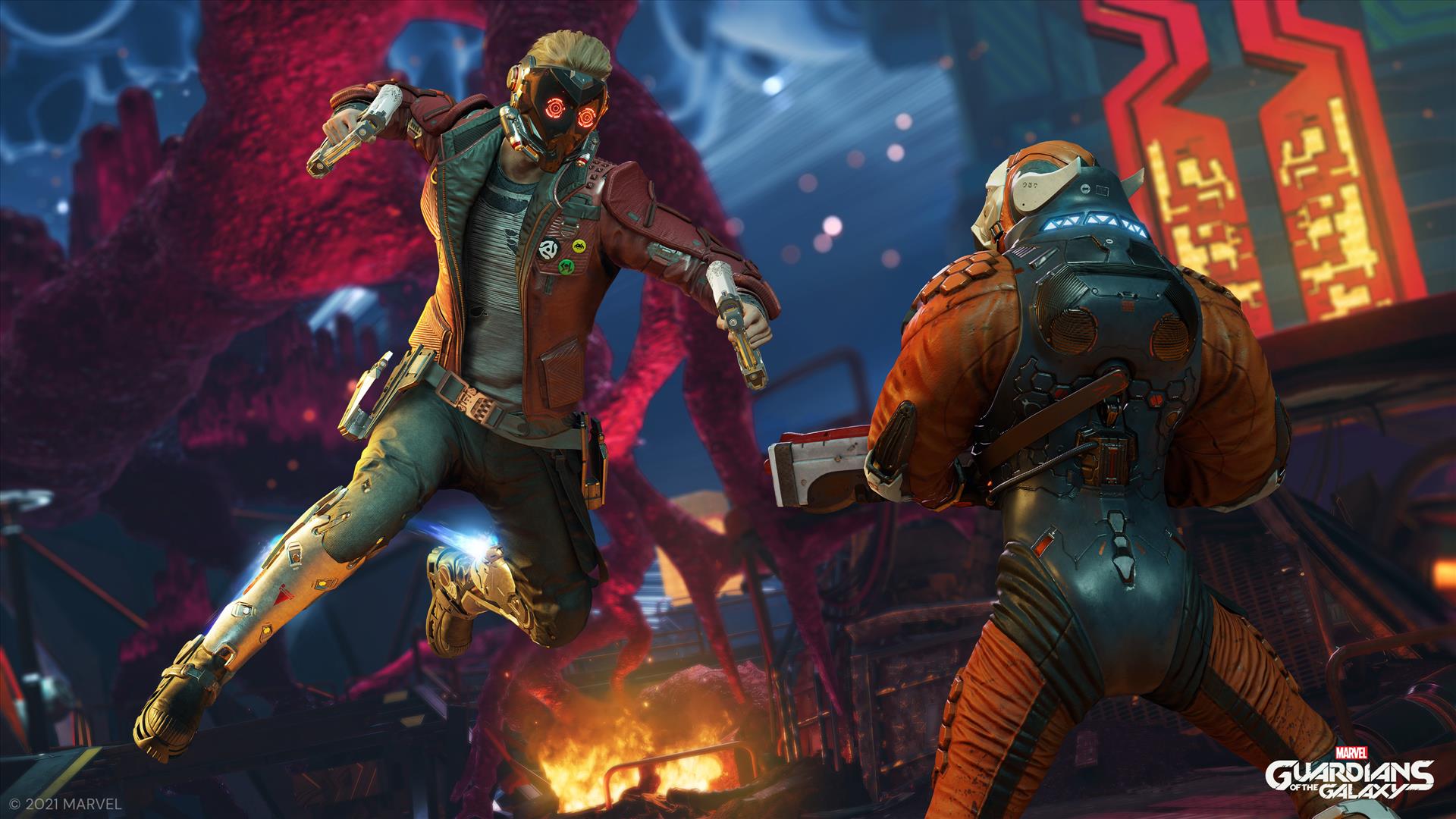 Without getting too deep into the actual story, I will say that it is very, very well written. Indeed, whoever wrote this thing needs to be put on a spinning pedestal so the rest of the gaming industry can throw roses at them and applaud. This is a game that people will point to for years and say, “That’s how you do storytelling in video games.” Guardians of the Galaxy has running gags that pay off hours after they are set up, characters that feel achingly real, and surprises that literally caused my jaw to drop.

Peter Quill and his gang of misfits find themselves caught up in an ever-escalating celestial crisis that may or may not be of their own making. After a recovery mission goes off the rails, the Guardians inadvertently free a being that is hell-bent on destroying the entire galaxy, though not through any conventional means. I won’t go any further than that, other than to say that the story rollicks through heists, jailbreaks and space battles, requiring each Guardian to dig deep into their reserves and confront their individual pasts—with all of the pain and unwanted self-reflection that comes with the territory. Each of these characters lives with some suppressed heartache, and through the course of this game, they will each be forced to examine how those scars shaped them into the people they are now. 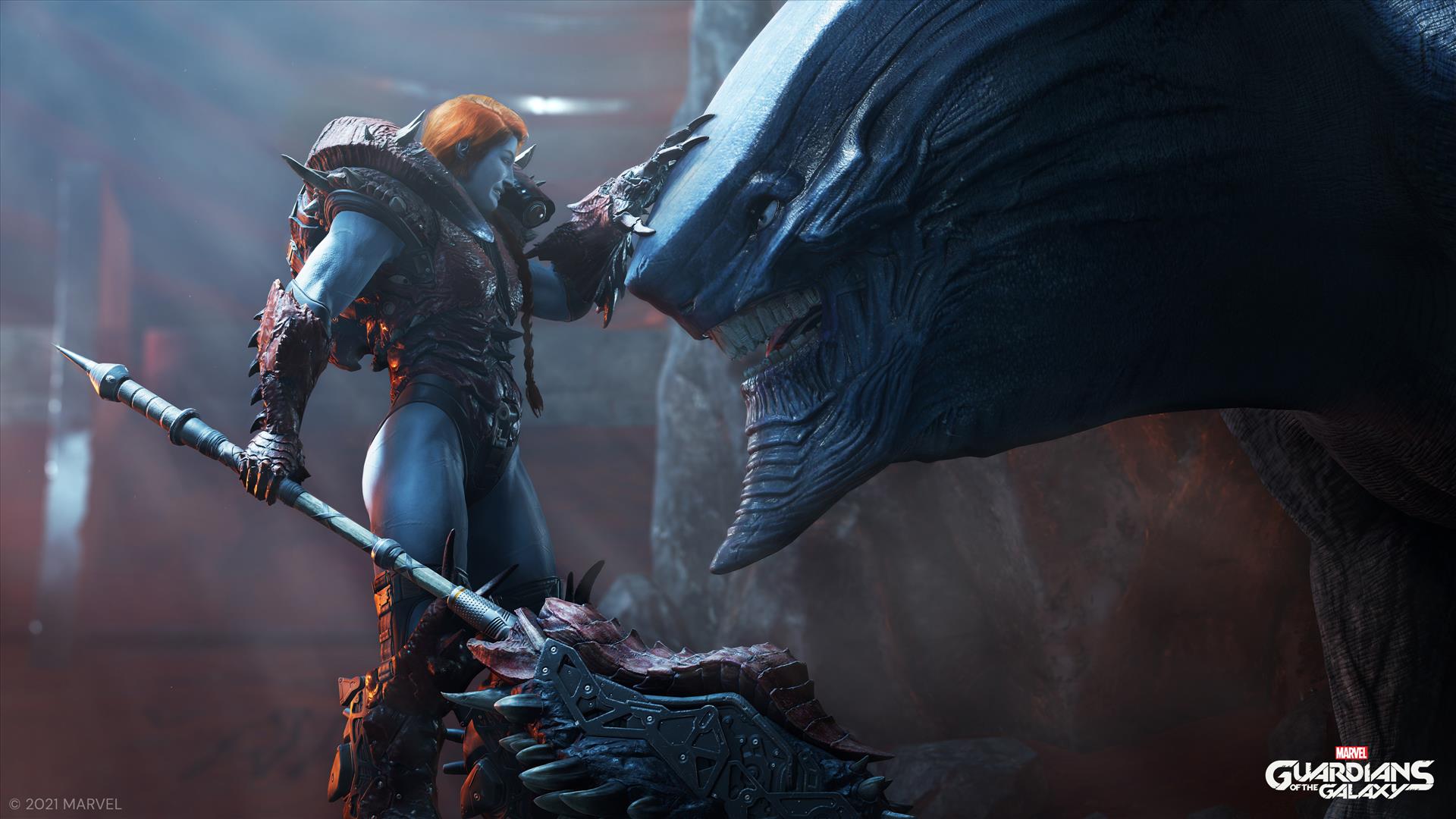 So yes, I obviously really enjoyed the story, and I also want to give credit to the animators bringing that story to life. I played Guardians of the Galaxy on a PS5, and for the first time, I was really happy to be playing a game in 4K. There is a richness of detail here that simply has to be seen to be believed. Each character is believably rendered in a way that simply wouldn’t have been possible 10 years ago—showing a subtlety of expression that rivals the best Hollywood animated films. There are so many little touches that elevate Guardians beyond other games of this ilk. Just keep an eye on whatever Groot is getting into in the background and you will see what I mean.

But all of this praise for the story and visuals leaves a rather large elephant in the room. How is the actual gameplay? And that’s where Guardians of the Galaxy stumbles a bit.

Guardians was developed by Eidos Montreal, and you can feel that team’s Tomb Raider games’ fingerprints all over this thing. The majority of the time you are in control, you will either be a) solving light puzzles to figure out how to move forward through the linear environments, or b) shooting an endless flow of faceless dudes. Neither of these activities is bad, per se, but the interactive parts of Guardians pale in comparison to the stellar story; towards the end of the game, I just wanted to move through the battles as quickly as possible so I could see what happens. 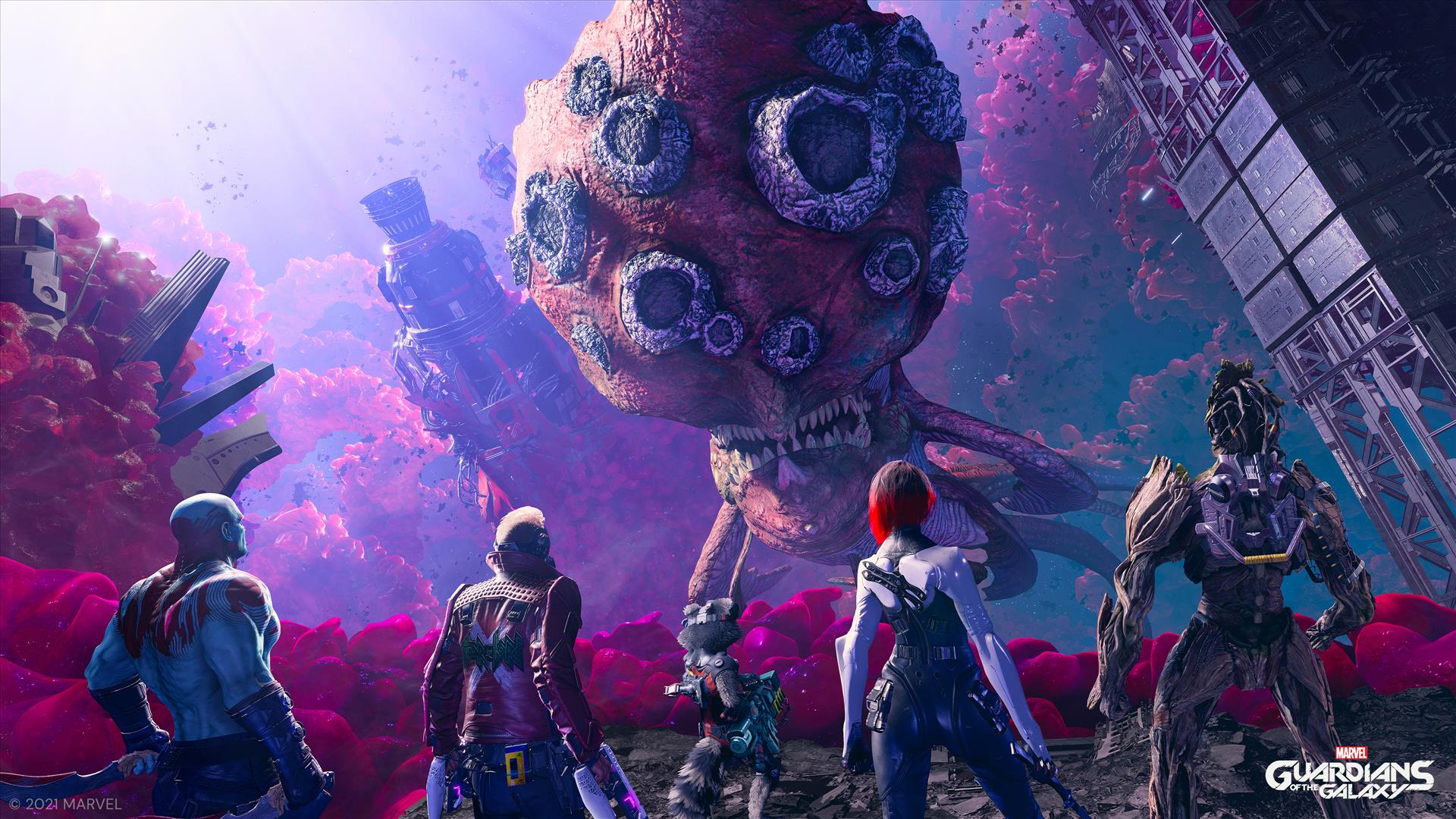 Guardians makes the choice to put the player soundly in Peter Quill’s boots, which was an immediately questionable choice. Sure, Star-Lord is a funny, likable guy, but he’s the least interesting of the Guardians when it comes to battle prowess. Players spend almost every battle pew-pewing at enemies with Quill’s blasters. The other characters all have up to four special moves on cooldowns that can be fired off to help turn the tide of battle, but for the majority of the game, the use of these powers was unnecessary. Until the game progressed far enough for me to unlock the really spectacular stuff, I would go for hours forgetting that my team could help at all, beyond just letting the game’s AI run them around.

I ached for the ability to jump into the shoes of the other characters—especially after seeing how spectacularly satisfying that dynamic was in Final Fantasy VII Remake. The tap of a button to jump into the shoes of Drax, flinging bad guys around the battlefield, or Rocket blasting people with ludicrous weapons? Could I spend some time as Gamora, flipping around with my twin blades, slicing and dicing through the crowd? Or could I be Groot…um…Grooting dudes? Forget about it. That would have been too cool. But that’s not the game this is.

As a result, the player just runs around as Quill, shooting baddies in the game’s too-frequently-the-same battle sequences (and towards the end of the game, there are far too many to count). To be fair, Quill does gain some interesting skills as the game progresses, able to manage the battlefield with some neat powers his mysterious blasters manifest. His freeze-ray was one of my favorites, and I also enjoyed the skill that would draw enemies close and then stagger them, allowing for a good old-fashioned fist-powered beat down. But for most of the game, the battles are simultaneously chaotic and kinda boring. Your teammates call out observations on who you should take down first, so just do that and you will be fine.

A few other ideas the game offers simply come off as unfinished. The Telltale-style notes that appear in the corner, informing the player that “Rocket will remember that you defended him” appear far too infrequently, and as far as I could tell, had zero impact on the storyline. If the game was displaying alternate scenes depending on my choices beyond a few alternate lines of dialogue, I certainly couldn’t tell. 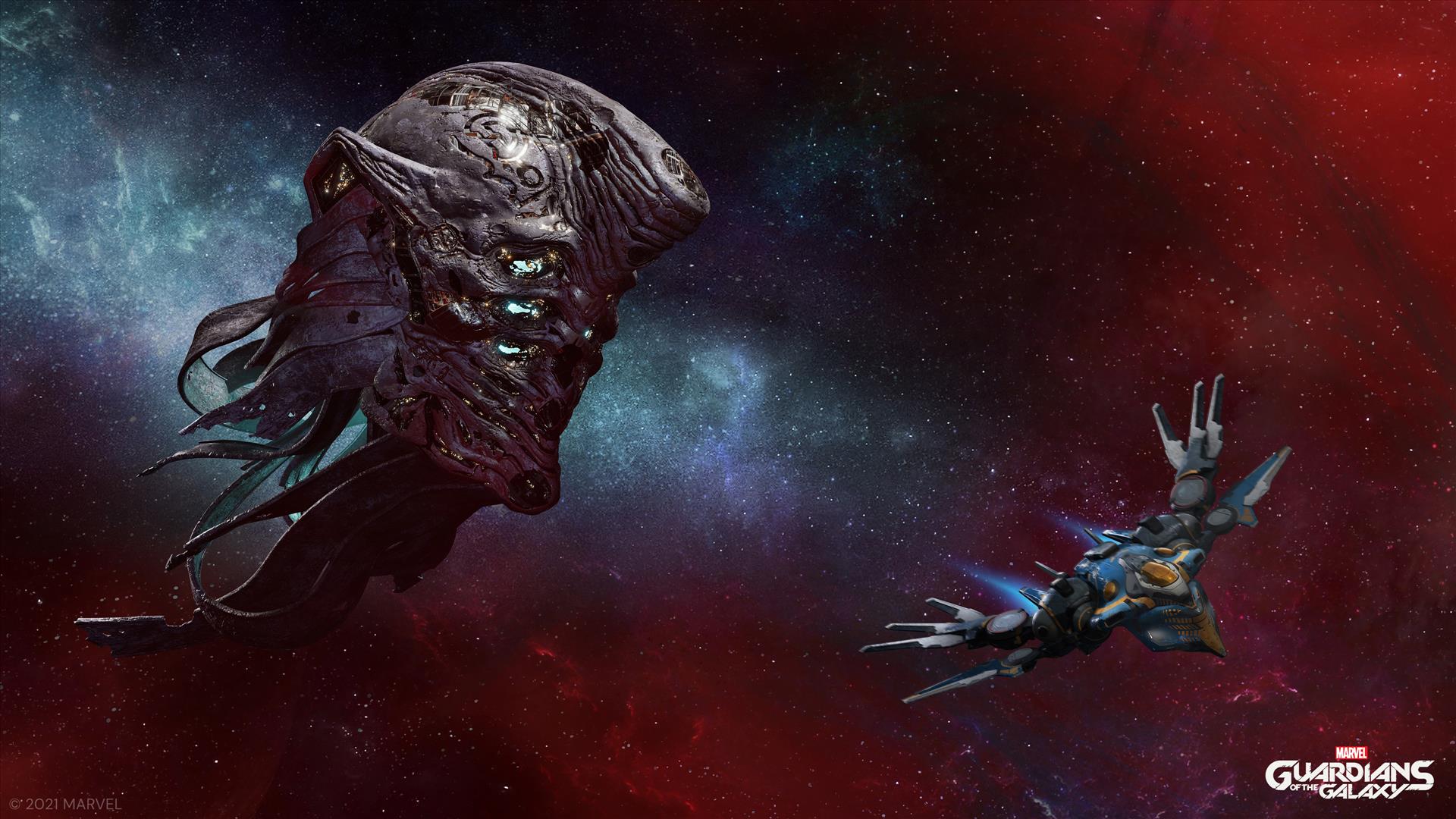 The weird “huddle up” mechanic also plays strangely in practice, with Quill pulling everyone together in the middle of a battle to chat about how it’s going. There is some chatter about how things are going (which may or may not really be related to the battle at hand), and then Quill will select between two choices, one of which will inspire his team for a short period of time all amped up and invulnerable. While helpful in some situations, I found these moments to be generally nonsensical—though I did like the way they started one of the soundtrack’s '80s hits playing in the background. I fought most of the game’s tough penultimate battle to the tune of Wham’s “Wake Me Up Before You Go-Go.”

Despite my distraction with the sometimes-uninspired gameplay, Guardians of the Galaxy is not a missed opportunity. It is a gorgeous AAA game that tells an amazing and surprising story through god-tier writing and some of the best graphics and animation I’ve ever seen. But it is also a game that succeeds in spite of itself, overflowing with half-baked ideas and sometimes unintelligible combat. Guardians is well worth playing, but players should go in understanding that the joy the story brings is paid for with a modicum of gameplay tedium.

Guardians of the Galaxy sets a new high bar for interactive storytelling and jaw-dropping visuals. With an unparalleled attention to detail, Guardians tells a rollicking sci-fi story rooted in true human emotion. But the gameplay sections of this narrative masterpiece sometimes bog down the proceedings with merely okay combat and exploration. Definitely play this game, but with the understanding that Peter Quill just isn't that exciting in a firefight.