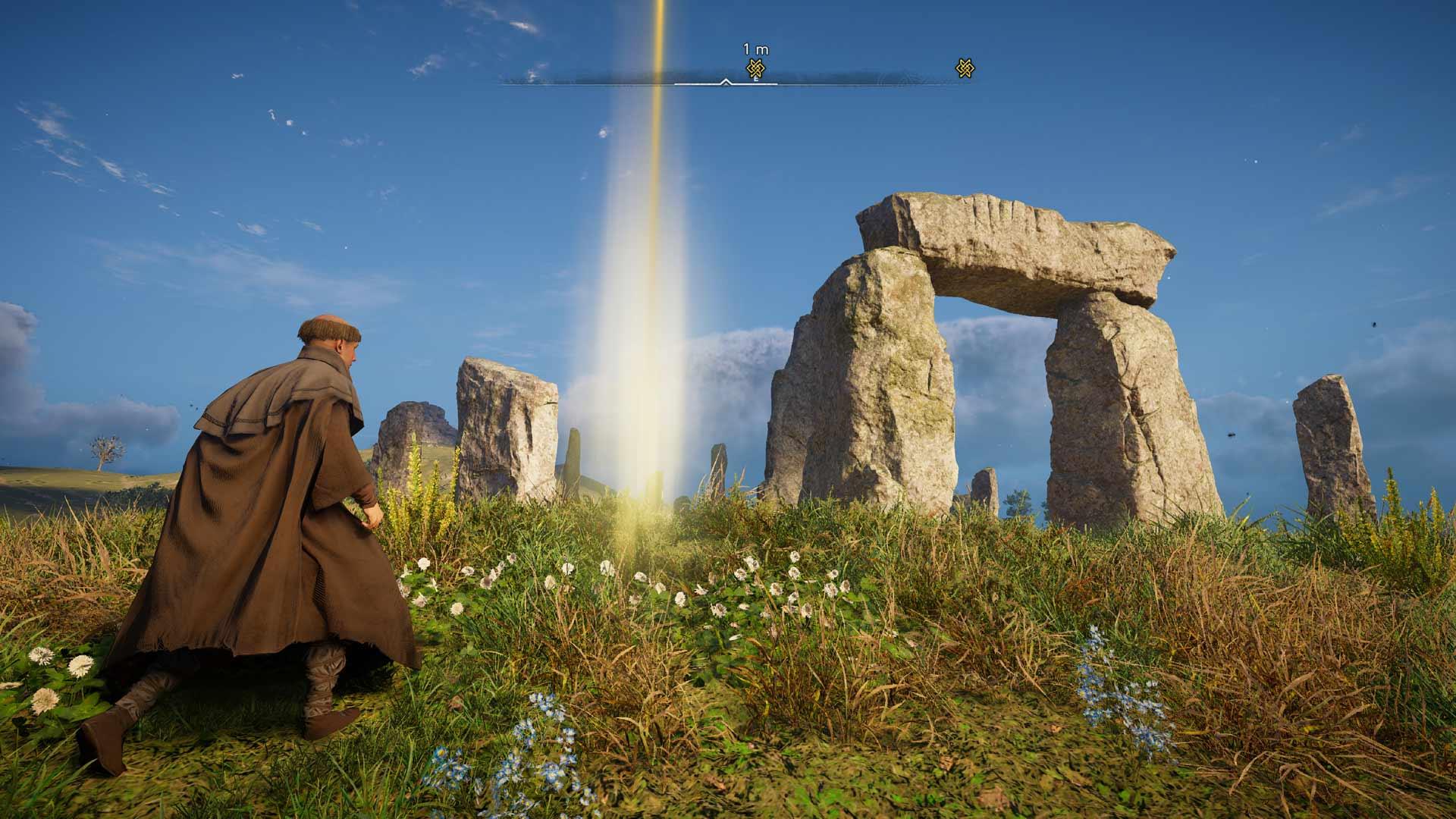 Discovery Tour is what Assassin’s Creed calls its Museum Mode. Okay, maybe Assassin’s Creed doesn’t call it “Museum Mode,” but I’m sticking to it. Developer Ubisoft started doing something interesting with this latest trilogy of Assassin’s Creed games. By the latest trilogy, I’m talking about Assassin’s Creed Origins, Odyssey, and Valhalla. Origins takes place in Ancient Egypt, Odyssey in Ancient Greece, and Valhalla in the Viking Age—Norway and England. This is where Ubisoft introduced Discovery Tour as a teaching tool. It’s non-violent. You stroll, climb, and leap through these incredible recreations of the ancient world without stabbing a single person in the neck with a wrist blade. Some people count that as a plus. I don’t know who those people are.

Just kidding: One of them is my daughter. She’s 11. For months now, she’s been asking me for the walking simulator version of Assassin’s Creed Valhalla. “It’s called Museum Mode,” I correct her, drunk with the power of parental authority. 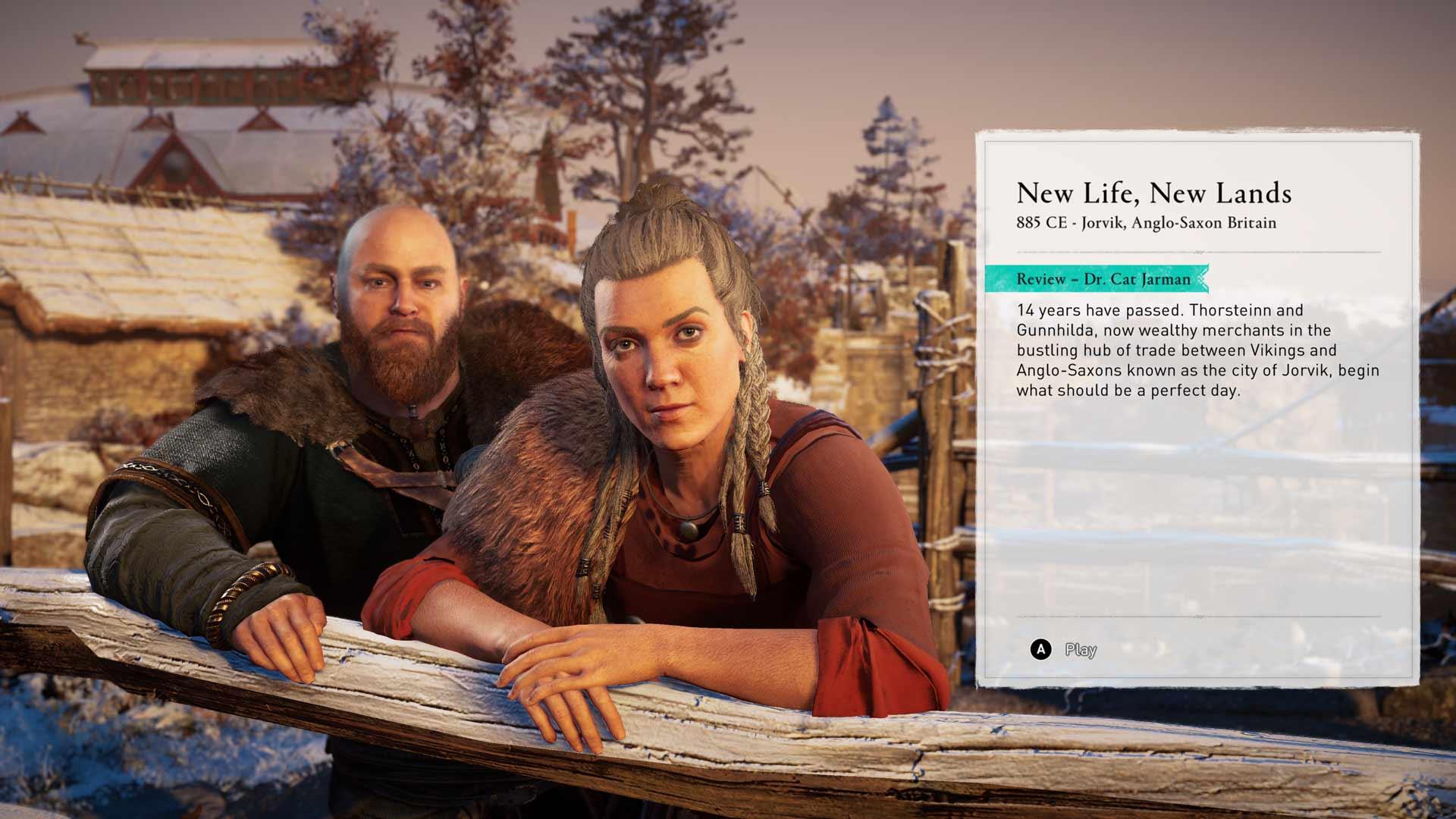 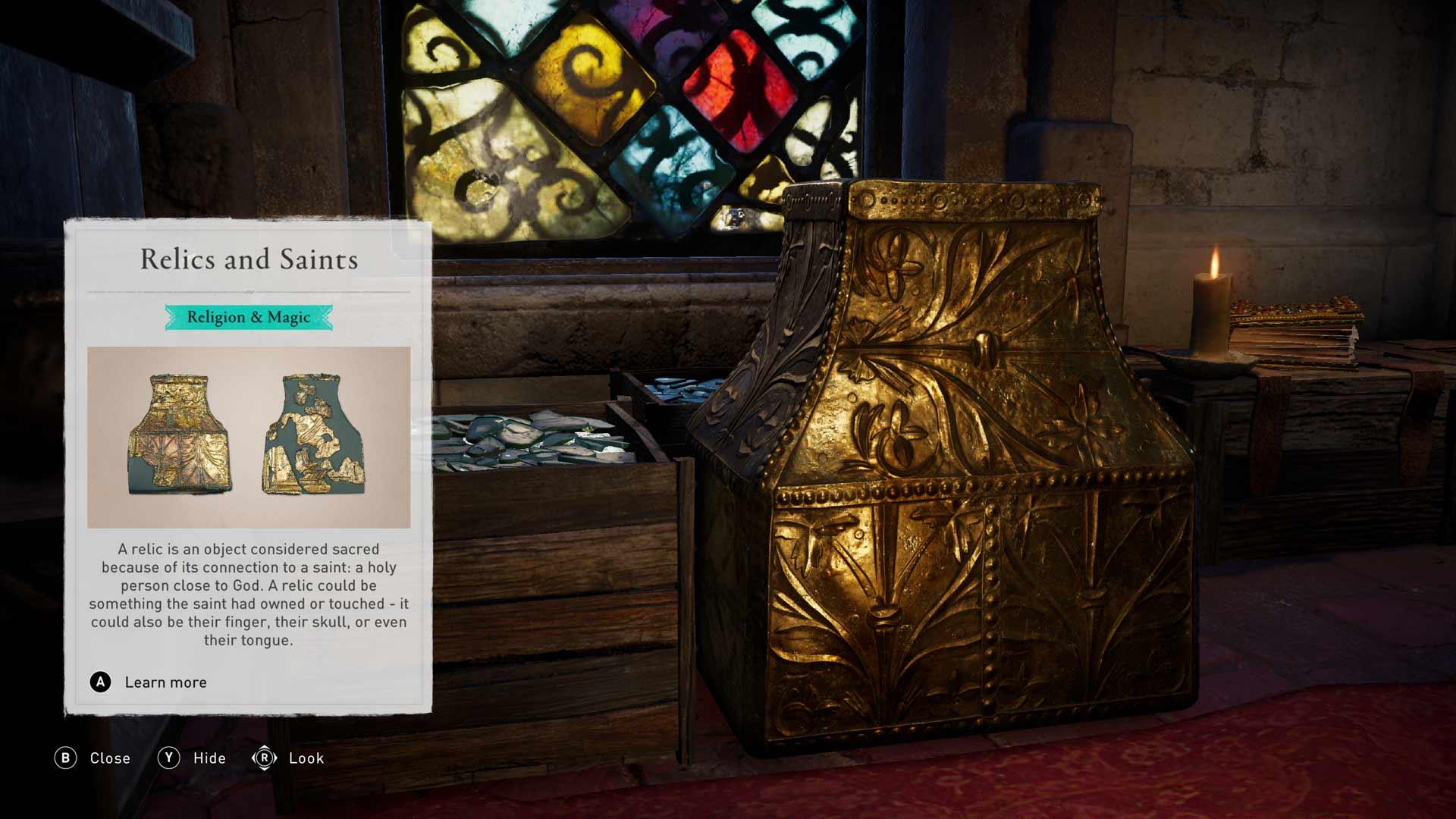 You’re not just doing reskinned Assassin’s tasks either. You’re doing new stuff. Like shaping wood to build a longship. Like throwing Friar Tuck over your shoulder and getting him to an infirmary. Like getting into rap battles with Viking rivals and friendly bards. Okay, you bust rhymes in Assassin’s Creed Valhalla, too. But I can’t get enough of it either way.

The exhibits are good, but these character stories are great. They should’ve been in Origins and Odyssey, too. Instead, it’s an idea that’s only been implemented into the latest one, Valhalla. All of it is made better and better because Ubisoft works with field experts on everything from social studies to religion, from architecture to...whatever you’d call the person making piles of coal on the outskirts of town. 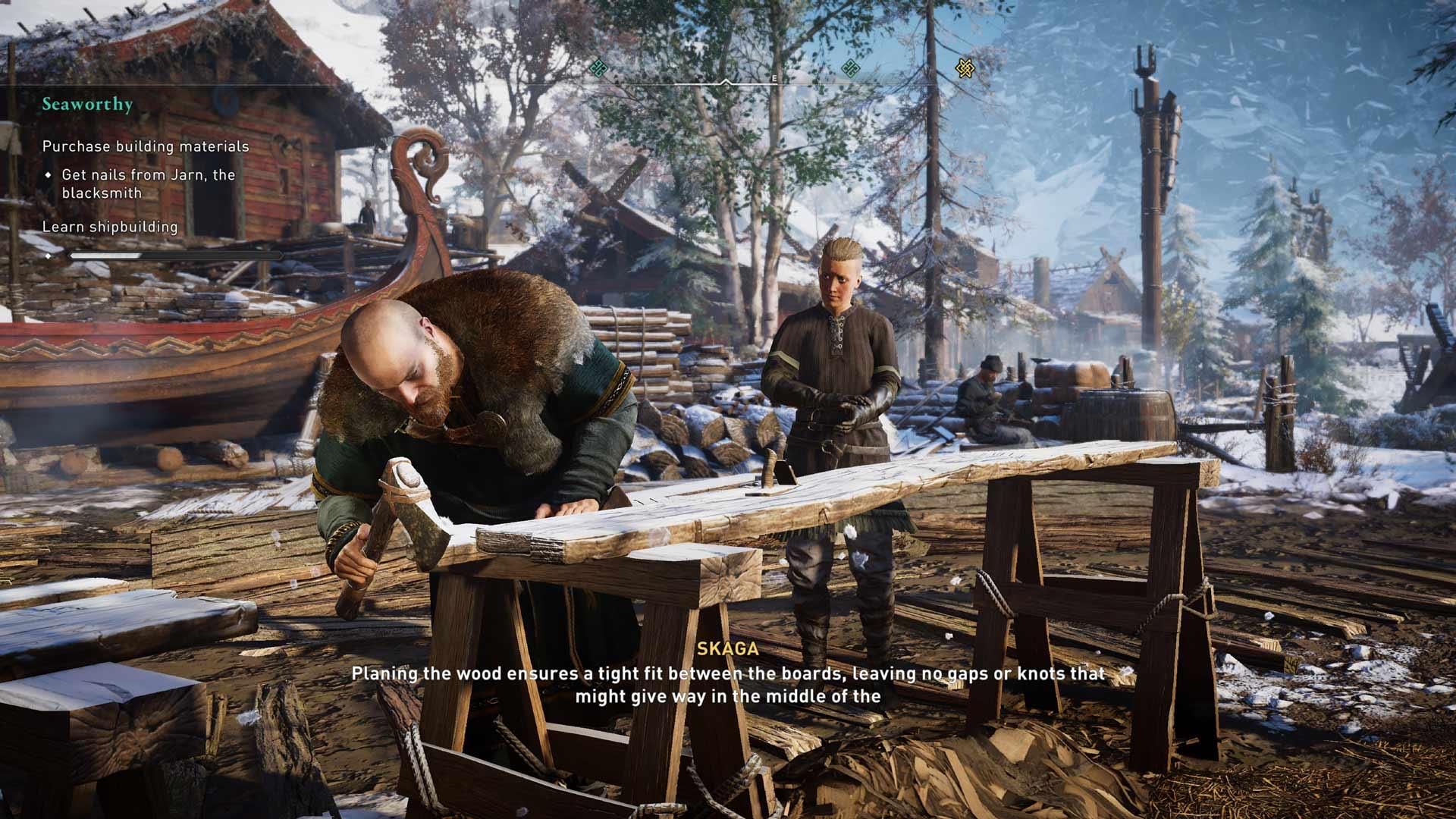 So, while I absolutely like Eivor, the main character in Valhalla, I really like Thorsteinn, too, a young man trying to get out of the raiding business and go full-time as a merchant—for himself and his square-jawed wife and business partner, Gunhilda.

The Discovery Tour begins in the Rygjafylke region of Norway—same as where you begin in Assassin’s Creed Valhalla—in a chapter called Oaths & Honour. “Thorsteinn and Gunnhilda are a young ambitious couple hoping to gain the attention of Harald Fairhair. The day before Thorsteinn is to set sail on his first raid, however, a jealous rival threatens all their carefully laid plans.” That’s a decent hook. 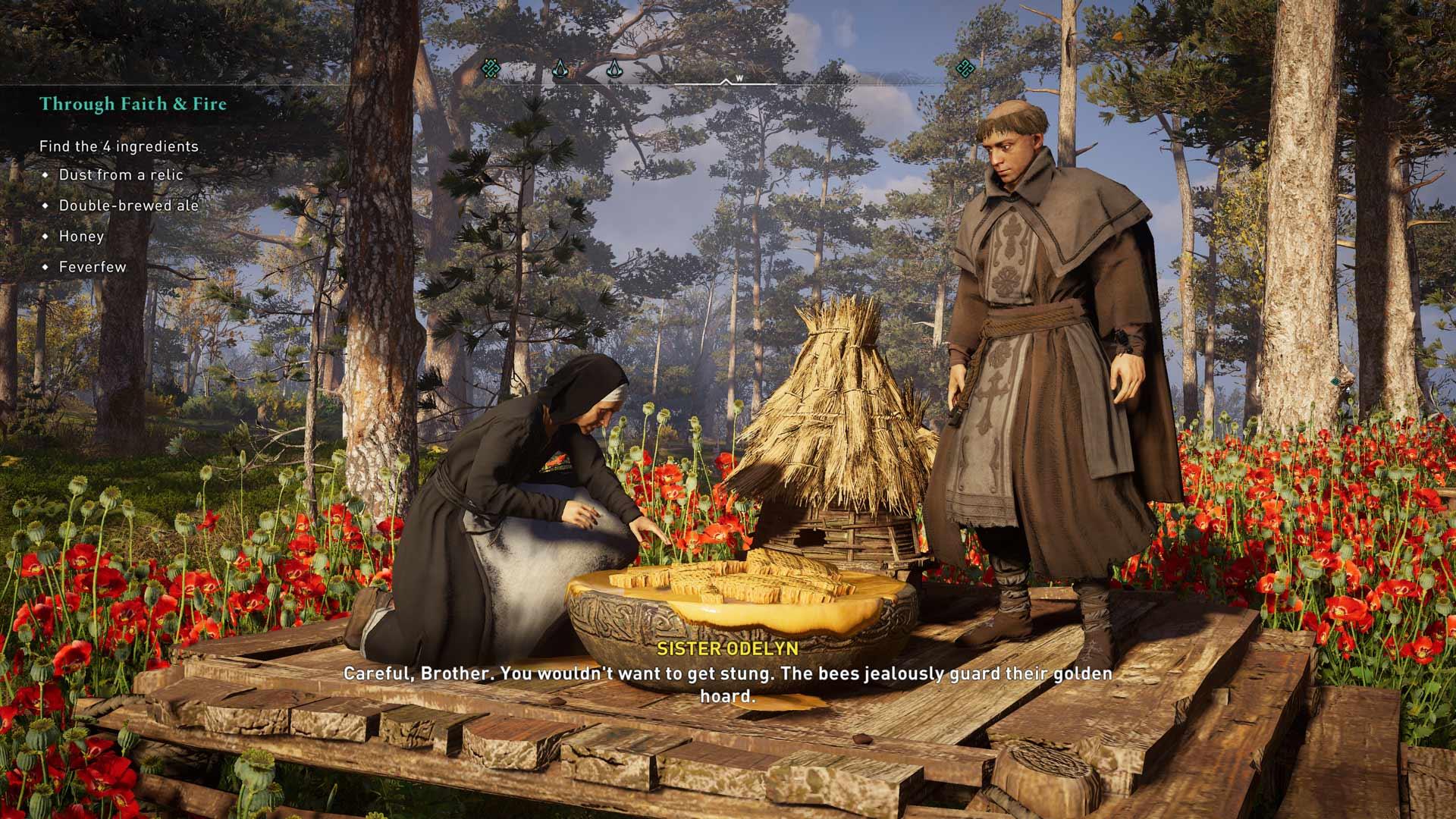 I didn’t think I’d be able to climb anything taller than a low stone fence, but your Discovery Tour characters are nimble. They can scale those fort walls, longhouses, ship prows, whatever you need. Certain spots around the scenery afford panoramic views, too. Clicking the panoramic button, the camera swings out, minimizes the HUD, and gives me a sweeping visual gesture of the surrounding landscape.

There is much put into the worldbuilding of an Assassin’s Creed game, and the Discovery Tour sheds light on the thousands of man-hours that go into the production of one of Ubisoft’s behemoth game series. 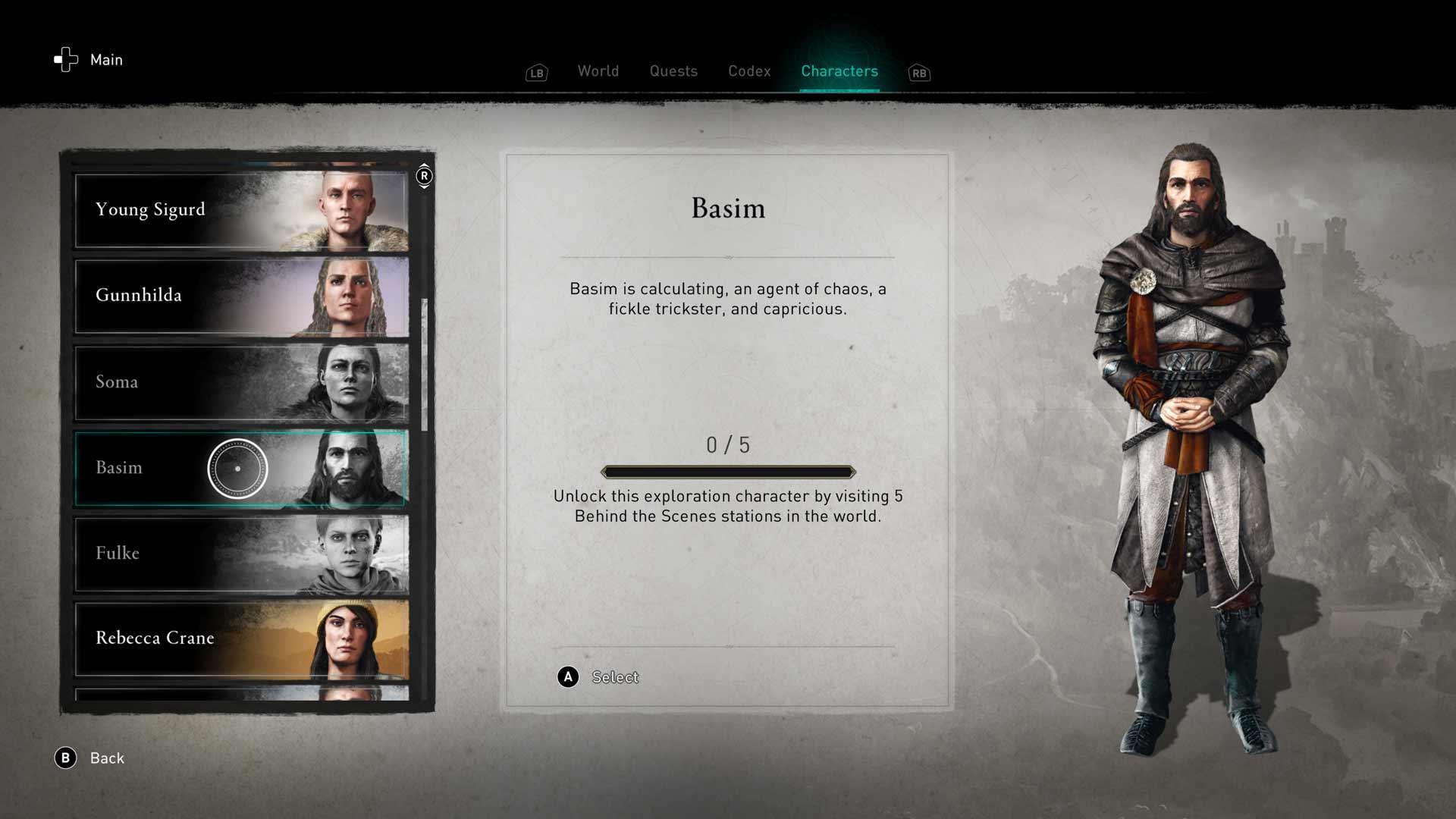 I enjoyed walking through the snow as a Norse merchant, relishing the time with my partner, having my honor spit upon, and then finishing off the offender with a few well-selected rhymes. Then I enjoyed running through a monastery, from morning prayers to breakfast, and then sprinting off to help a fellow monk because he’s experiencing “fire in the veins.” Remember, you play from a few different characters’ perspectives, from Norway to England and back.

Each location is deliberately made to look, act, and feel vastly different from the other. The Nordic people, of course, get ice, wind, and snow, along with warm hearth fires and muscled brethren. Whereas the English people get mist and sparkling sunlight, rose gardens and green grasses, but cold stained glass windows and stony interiors. That’s simply more praise for the art team, as opposed to talking specifically about the Discovery Tour. But it’s wonderful that all of the assets that go into the creation of an Assassin’s Creed game can find a new educational lease on life in the Discovery Tour. 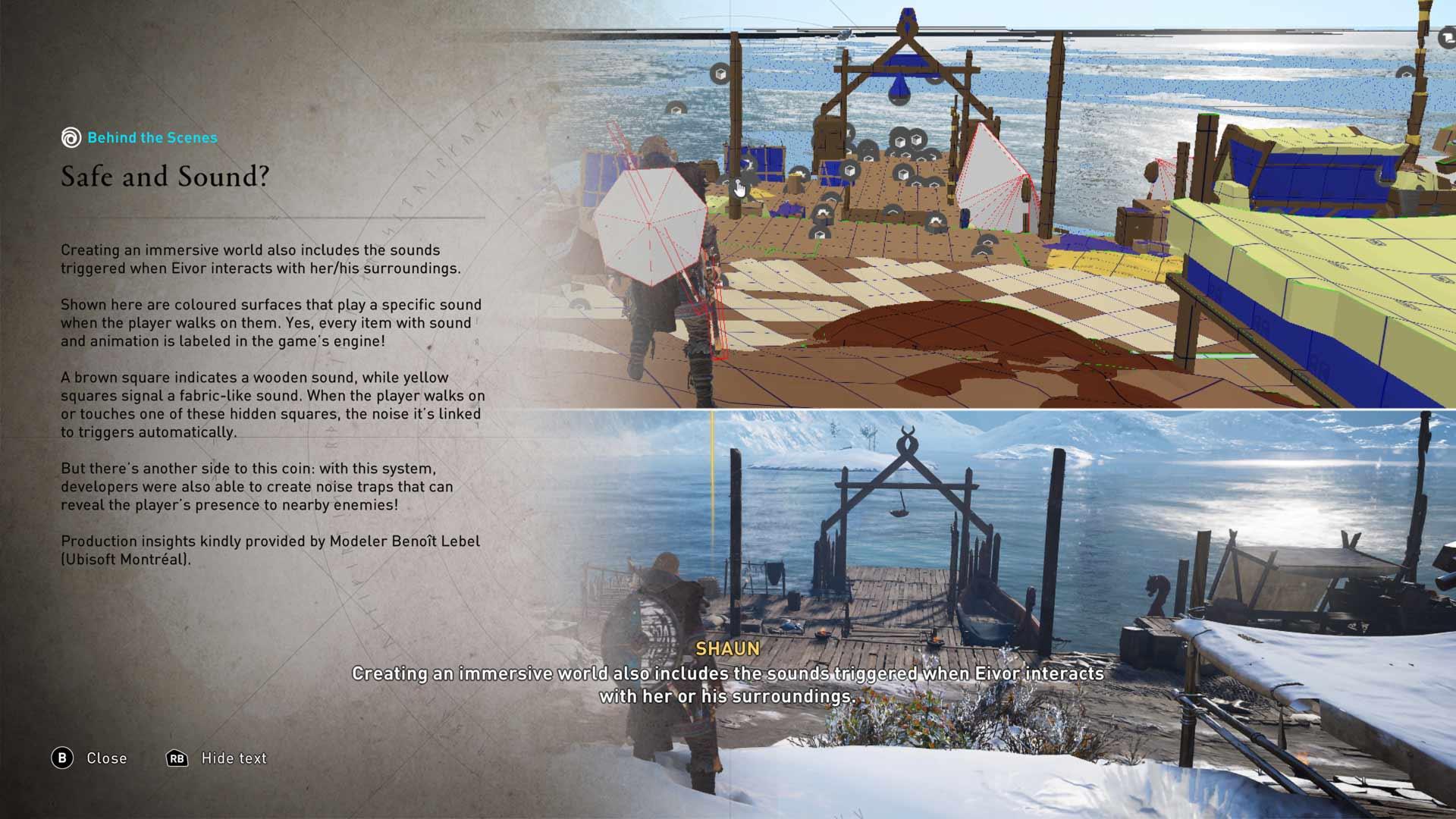 Not going to lie, some of the voice acting here sounds like a (very good) text-to-speech app. Some NPCs spoke with the stilted, almost-backwards quality of a bot piecing together the sounds of words without the benefit of a voice actor being in the booth. I could be imagining things. Perhaps a Norwegian accent simply has a different tone, pitch, and delivery than I’m used to.

But being the victim of a Viking raid—and enacting a strategic retreat from the perspective of a lowly monk? That was more intense than half the scenarios I faced in the Assassin’s Creed half of Valhalla. Smoke rising up. Angry Viking voices yelling invectives that I’d heard during the Nordic portion of the Discovery Tour. Not having a weapon to defend myself with. The Discovery Tour might be combat-free, but that doesn’t mean it doesn’t bare its teeth. The 9th century was a complicated time. I’m not going to declare either the Anglo-Saxons or the Vikings as the good guys. I’m just going to enjoy this Museum Mode and its excellent contemporary photography interspersed with enough period drama to keep me sprinting between Exhibit A and Exhibit B.