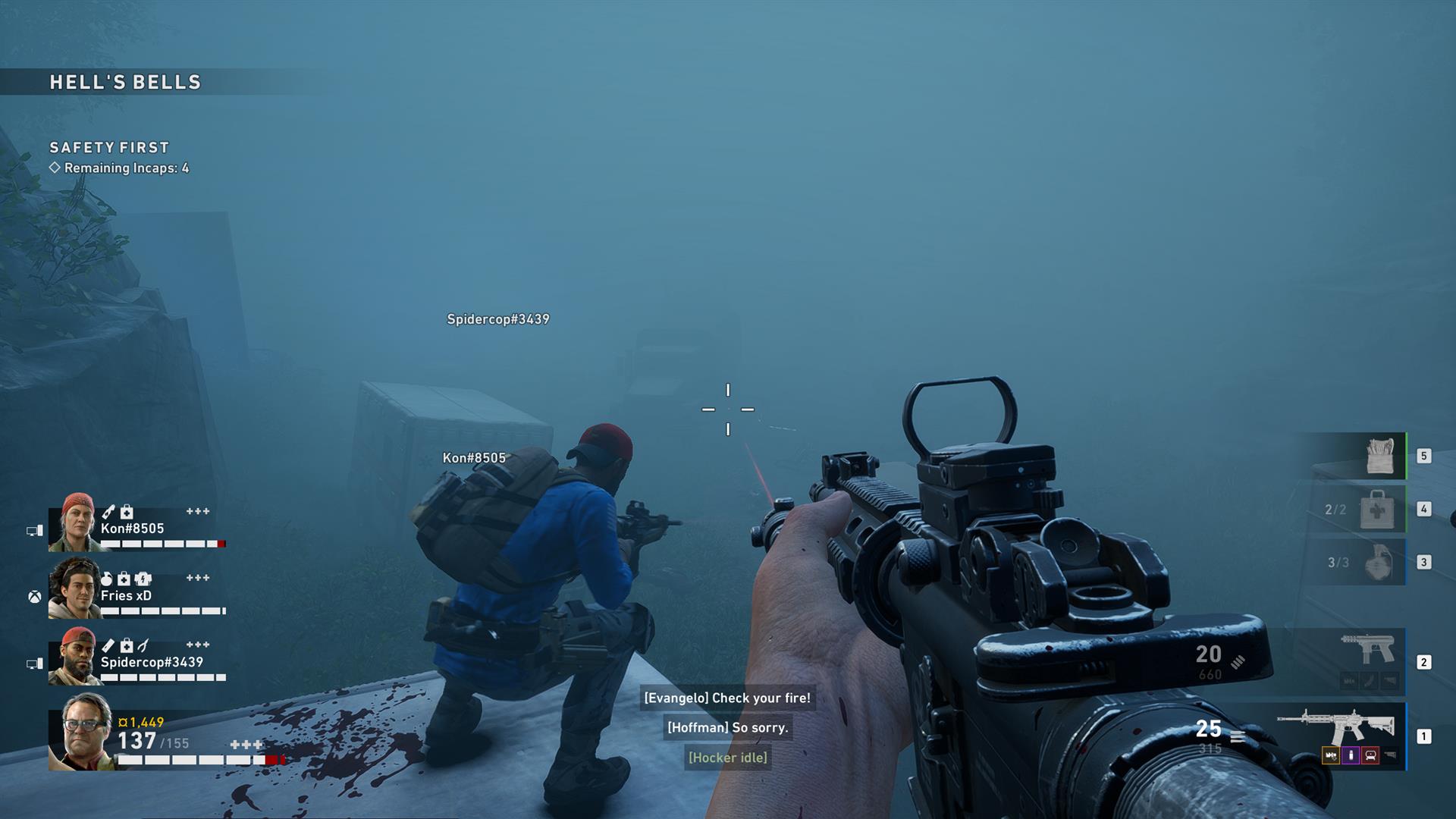 It’s been 11 years since Valve released their cult classic Left 4 Dead 2. Since then, the only things that kept the fans going were the countless efforts made by the modding community. Now, the long awaited Left 4 Dead 3 has arrived in the form of a different yet similar name. Back 4 Blood is the spiritual successor to the beloved, definitive, cooperative zombie shooting experience developed by Turtle Rock Studios, formed by the developers of the original franchise.

The classic formula of Left 4 Dead makes an unsurprising reappearance in Back 4 Blood. You and three other friends team up in a fully cooperative campaign divided into four acts. Guns and gear are scattered throughout the map and designated safe rooms act as checkpoints. Special infected, called Ridden in this iteration of post apocalyptic Earth, make their return, with the added addition of bosses as well. Back 4 Blood introduces enough of its own flair to stand out quite a bit from its decade old predecessor.

Graphically speaking, Back 4 Blood looks gorgeous and runs smoothly. During my entire playthrough of the campaign, the game only crashed once on me. But to my surprise, I was actually able to jump right back into my cooperative session without losing any character progression. Voice acting is superbly done, with enough crude jokes cracked by all the characters that bring the same sense of personality back from the original Left 4 Dead.

Back 4 Blood introduces a central hub called Fort Hope, where you can purchase different outfits for your characters, skins for your guns, test out weapons in a shooting range, and select which mission to take on. Funny enough, the shooting range happened to be one of the most fun aspects of the game. When playing in cooperative mode, friendly fire is allowed in the shooting range, allowing for some humorous PvP action among your friends with infinite ammo at your disposal. 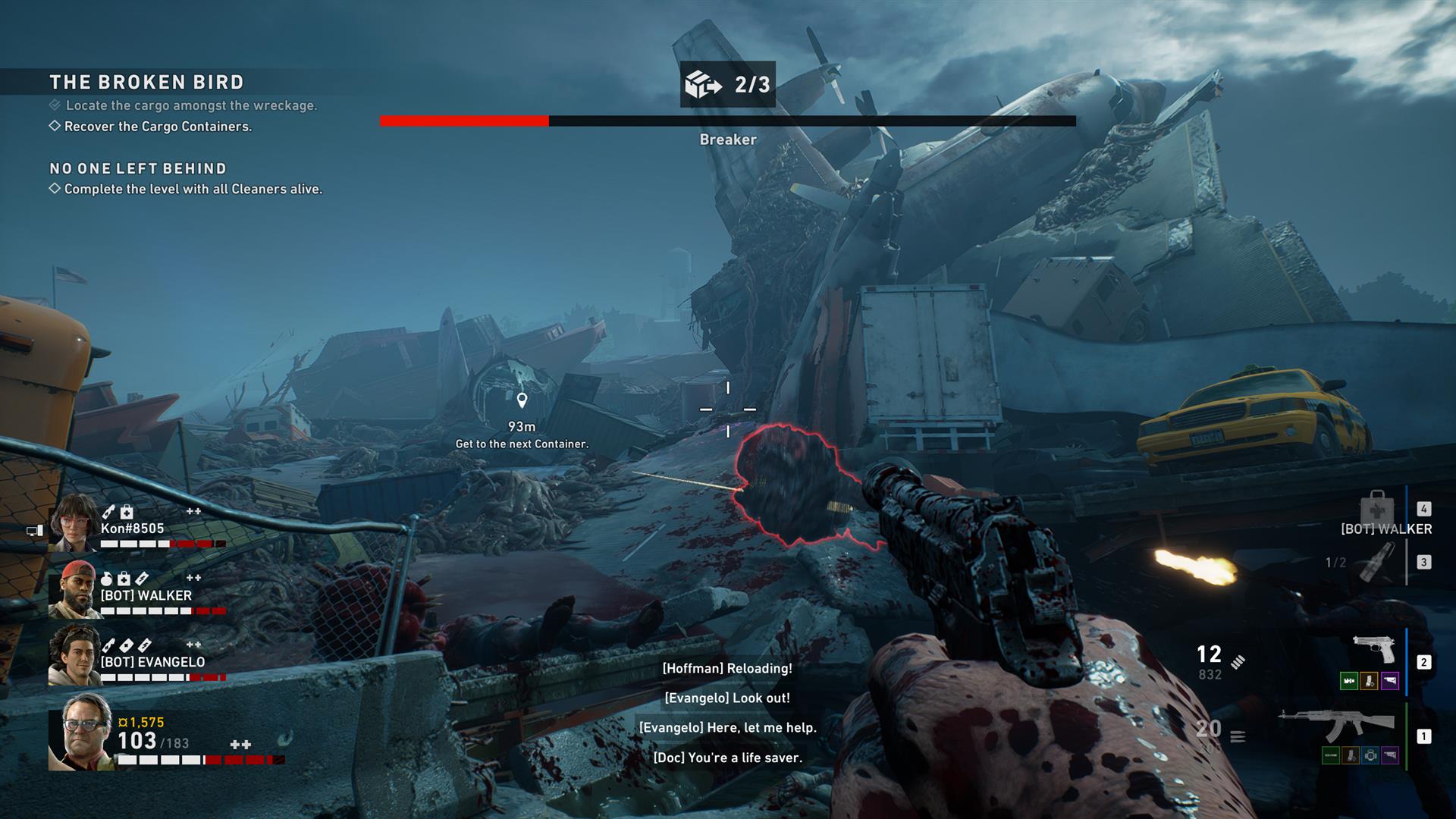 Perhaps the greatest difference that Back 4 Blood brings to the table is its unique take on progression, something that did not exist in the original Left 4 Dead. Back 4 Blood establishes progression through the use of a roguelike deck-building system. A deck of 15 cards can be created that offer a variety of buffs and perks, including specific builds such as increased melee damage and speed, faster weapon swap, or team-oriented buffs such as faster revive speed and overall team ammo. Some cards also have a negative tradeoff namely more armor for a move speed penalty or greater weak point damage for greater damage taken by yourself. A card is drawn at the start of each level, which stack up as you push your way through an act. If you die and fail, you lose all your current guns and cards, much like that of a roguelike game. After completing each level, you receive supply points which can then be used to purchase supply lines that contain cosmetics and better cards.

There can’t be only cards for you and your team though! The AI Director makes a grand return as well, and brings along corruption cards that cripple and deter your team. Every run is randomized, so item layouts and enemy spawns differ each time. No two playthroughs feel the same. Corruption cards change the way a mission is played out, spawning special variants of existing Ridden, adding immense fog, or placing alarmed doors everywhere that will trigger a horde if tampered. These corruption cards get increasingly more dangerous and stack the further you progress in an act, sometimes allowing 10 or more corruption cards being in play at the same time. This is probably where the balancing in Back 4 Blood begins to be somewhat questionable. There are three difficulties: recruit, veteran, and nightmare. Sometimes when the corruption cards are fully stacked, even recruit mode feels insanely challenging. Trying out veteran mode for the first time felt borderline masochistic and impossible to complete. I can’t even imagine how nightmare mode would play out. 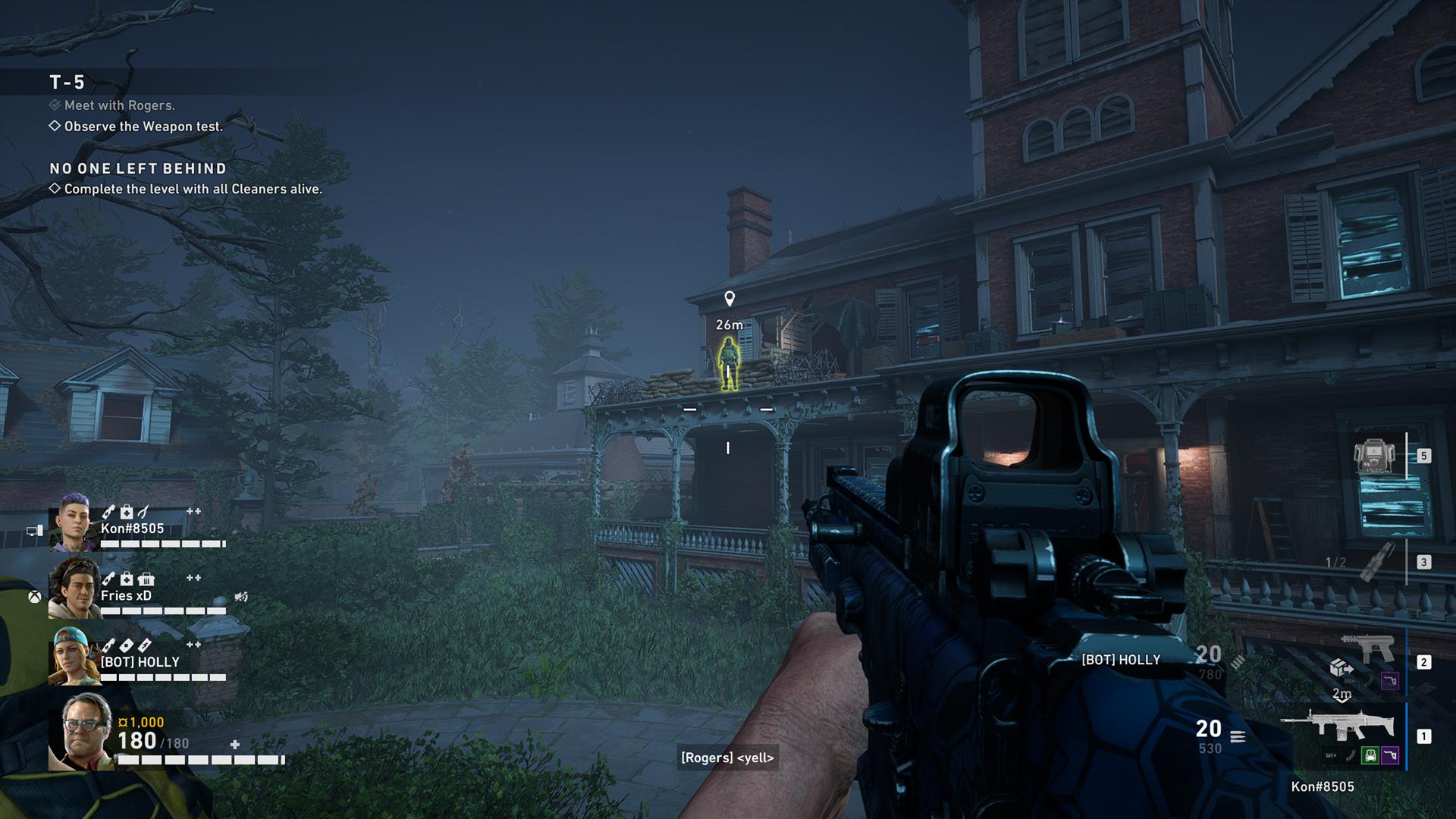 While playing through a mission, you come across currency called copper, which you can use at shops at the beginning of a level to purchase gun modifications, health kits, grenades, or team upgrades. An iffy design choice from the developers is that you cannot unequip a modification from an existing gun. Say you decked out your Scar rifle with a legendary scope and magazine, but you found a way better AK-47 later on. The attachments to your Scar cannot be detached and are rendered useless and wasted if you choose to switch it out for the AK-47.

There are a total of eight characters, or cleaners as the game calls them, that can be played in Back 4 Blood. Each playable character has their own unique personality, class ability, and team perk. Hoffman, for example, grants the team 10 percent more ammo capacity while granting himself one more offensive slot for an extra pipe bomb. Doc, on the other hand, can heal her allies once per level and gets 20 percent better healing efficiency. Paired with the robust deck-building system and the wide range of characters to pick from, Back 4 Blood truly offers an insane amount of customization and strategy building. 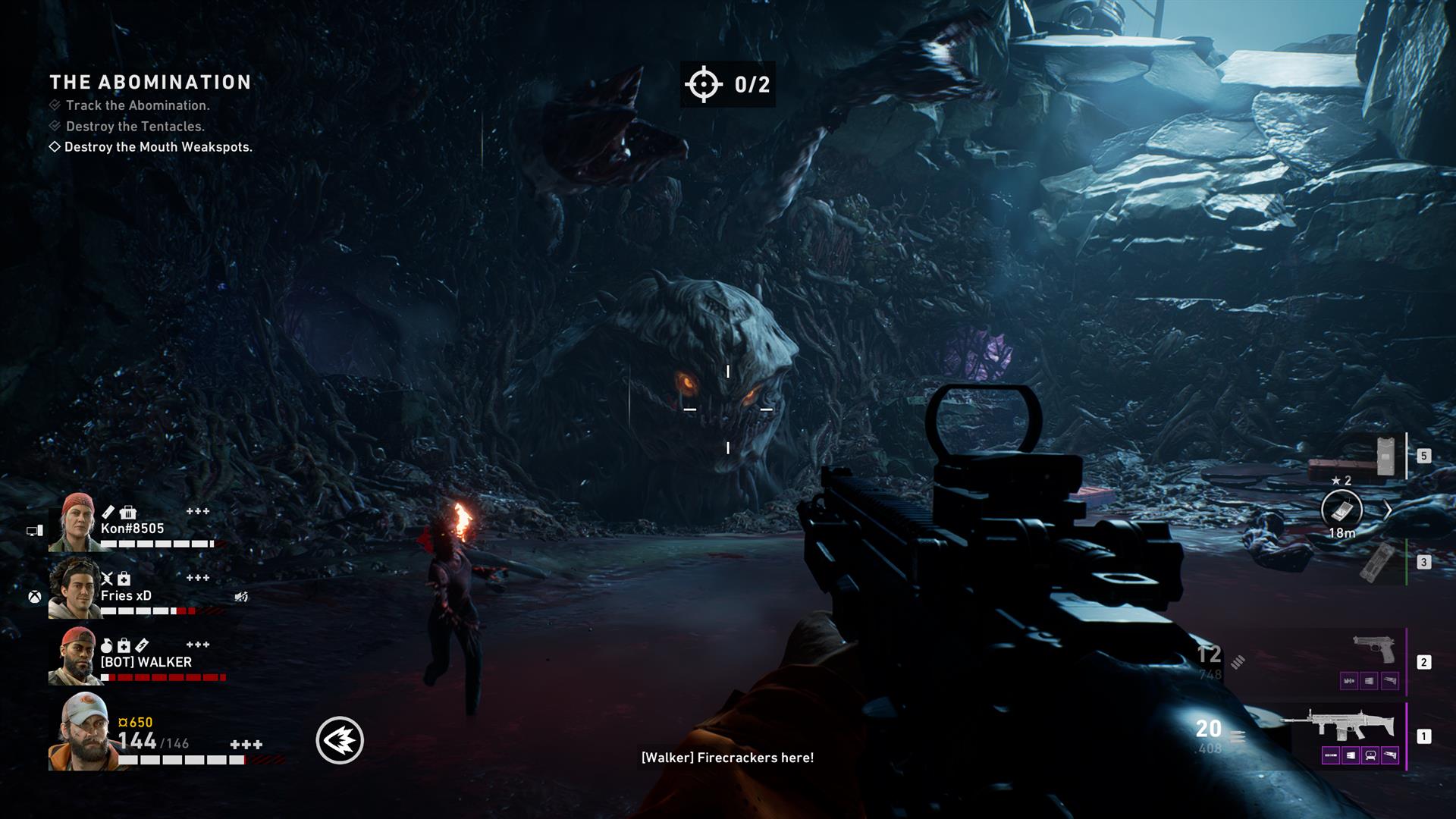 A big component of the original Left 4 Dead formula was its sense of repetition and tedium, running the same maps over and over. Back 4 Blood greatly reduces the feeling of this as the maps spanning across four acts never feel the same. Sure, some areas are revisited again, but there’s always a different area you are exploring in an otherwise previously visited location. This not only makes the game more immersive, but keeps the narrative familiar and fleshed out as well. Though the narrative aspect in any cooperative zombie shooting game takes a back seat most of the time, the locations in Back 4 Blood aren’t random and are cohesive with the overall flow of the story. Level designs in each area are also very well done, with maps big enough to promote exploration, but not small to the point where it seems too linear.

In addition to the cooperative campaign mode in Back 4 Blood, the game also offers a 4v4 PvP mode called Swarm. This is similar to the original PvP mode in Left 4 Dead but with its own twist on it. Players take control of either humans or Ridden and battle it out in a “Who survived the longest?” mode. The only goal is to survive longer than the other team. After a round, the sides switch, so the side that played as humans now plays as Ridden. While the humans have no way to upgrade their weapons or gear, the Ridden side earns currency that can be used to beef themselves up. This Swarm mode seems half-baked, with clear balancing issues between humans and Ridden and doesn’t quite live up to the hype of the original PvP mode in Left 4 Dead. 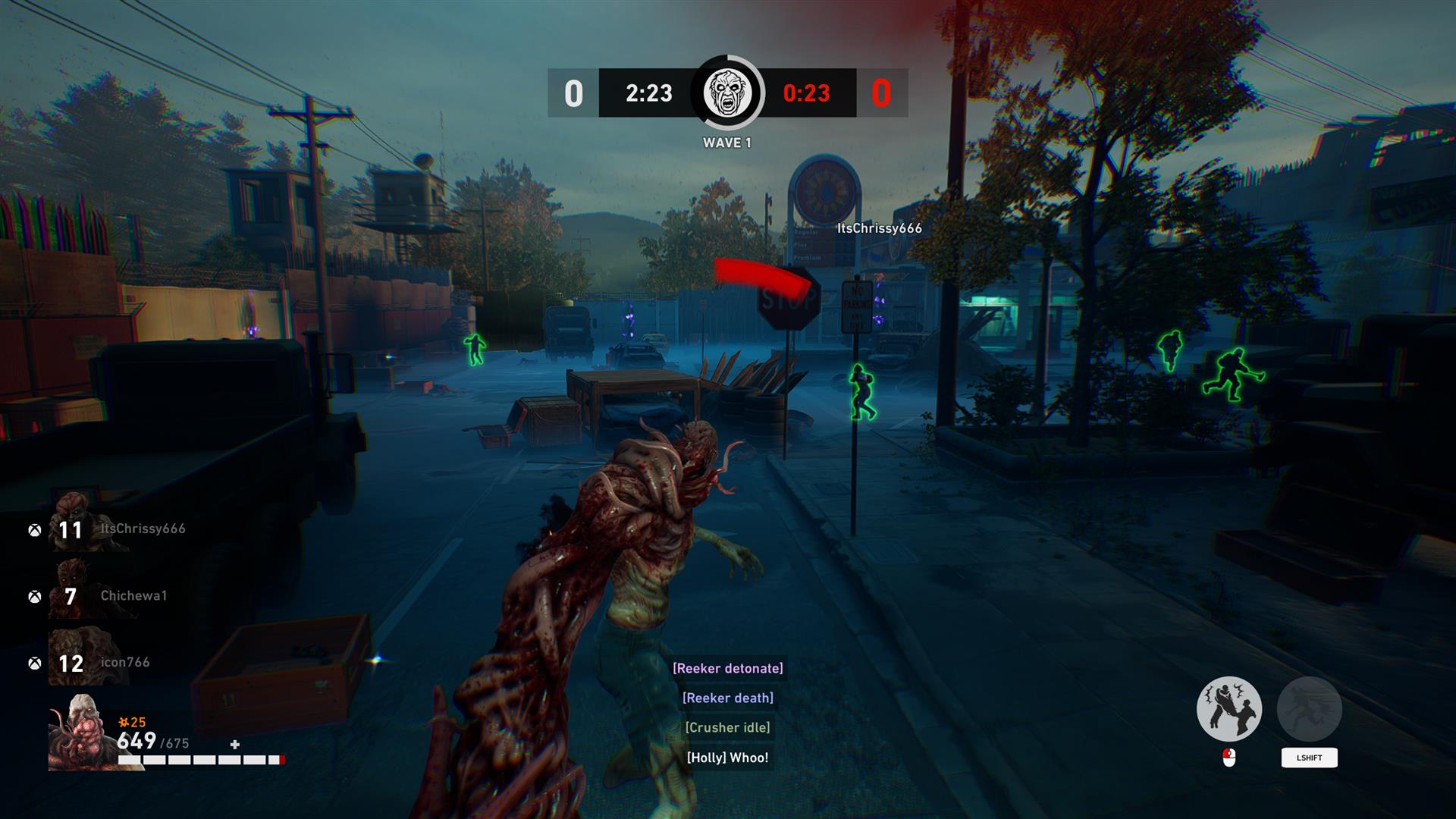 On the topic of balance, Turtle Rock Studios also made a poor choice when it comes to solo play. I get that Back 4 Blood is a game meant to be played with others, but there is definitely a set of people out there that prefer to play their games alone, at their own leisure and pace. Back 4 Blood severely punishes you for playing solo, with poor AI companions and absolutely no character progression. Matchmaking with randoms online is also janky as there is no public lobby system. You queue up for a particular mission and hope that a current game exists or you will be waiting a long time. Back 4 Blood is best played with a full group of friends, so that everyone’s on the same mission in the same act.

The only part that I can’t see past is the price tag that Back 4 Blood carries. For a game that essentially plays as a multiplayer-only game, it costs a beefy 60 dollars to purchase at launch. Honestly, the game is probably more worth playing on Xbox Gamepass for those who own it. There are many other reputable zombie shooting franchises out there that offer a similar experience at a fraction of Back 4 Blood’s price tag.

While Back 4 Blood isn’t the exact Left 4 Dead 3 that fans of the series were hoping for, it does enough to satisfy the formula they were craving for so long. Even with its poor solo campaign mode, unbalanced PvP mode, and various minor annoyances, Back 4 Blood is the best modern Left 4 Dead experience to date. The excellent campaign, unique roguelike deck building system, and wide cast of character personalities and abilities made the game a blast to play with a group of friends.

Back 4 Blood is a worthy successor to the Left 4 Dead franchise. It maintains the fundamentals of what made the original so addictive and satisfying while adding its own little flair with the rogue-like deck building system. What holds Back 4 Blood from getting a better score is its high price tag and lack of solo play progression.