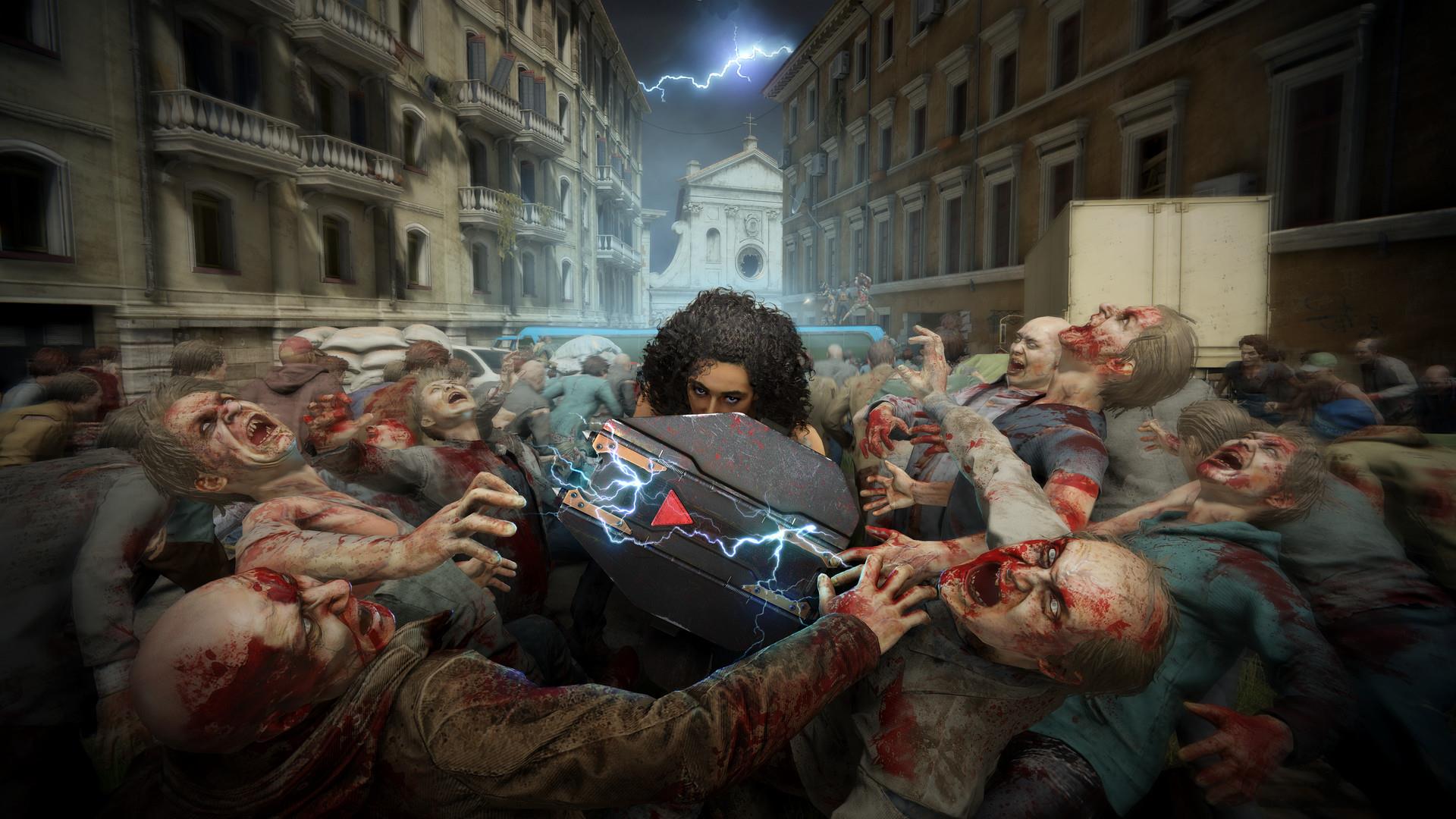 When you think of World War Z, you probably think of the 2013 action horror film starring Brad Pitt. What you probably didn’t know is that the movie is actually based on the 2006 novel of the same name. The novel's success warranted a four-player cooperative zombie shooting video game with the same title. Set in the same universe as the movie and novel, World War Z: Aftermath is a major expansion of the original release in 2019 that adds an optional first-person perspective mode, two new classes, revamped melee combat, new enemy type, two new story episodes, and support for 4K and 60FPS on next-gen systems. Saber Interactive also announced that Horde Mode XL is coming as post-launch content later this year, which is a more difficult version of the original horde mode that contains endless waves of zombies to survive against. There are a total of six available difficulties in World War Z: Aftermath and can be played both online or offline with bots.

It is without a doubt that the formula World War Z: Aftermath derives from is none other than the Left 4 Dead franchise. As such, World War Z: Aftermath is a cooperative team-based shooter that emphasizes teamwork and replayability. However, Aftermath adds enough of its own flair to compete with other games of the same genre. The biggest difference between Aftermath and Left 4 Dead is Aftermath’s inclusion of progression via classes and upgrades. There are now a total of eight classes to choose from, ranging from medic and slasher to the newly added vanguard class. Equipped with a special shield, the vanguard acts as a tank to carve a path for your team to follow. Each class has its own unique abilities, starting weapons, and skill tree. Aftermath also boasts a beefy variety of weapons to choose from, from machine pistols, shotguns, and sniper rifles all the way to katanas and rocket launchers. Every weapon can also be leveled up and upgraded to unlock more powerful variants. 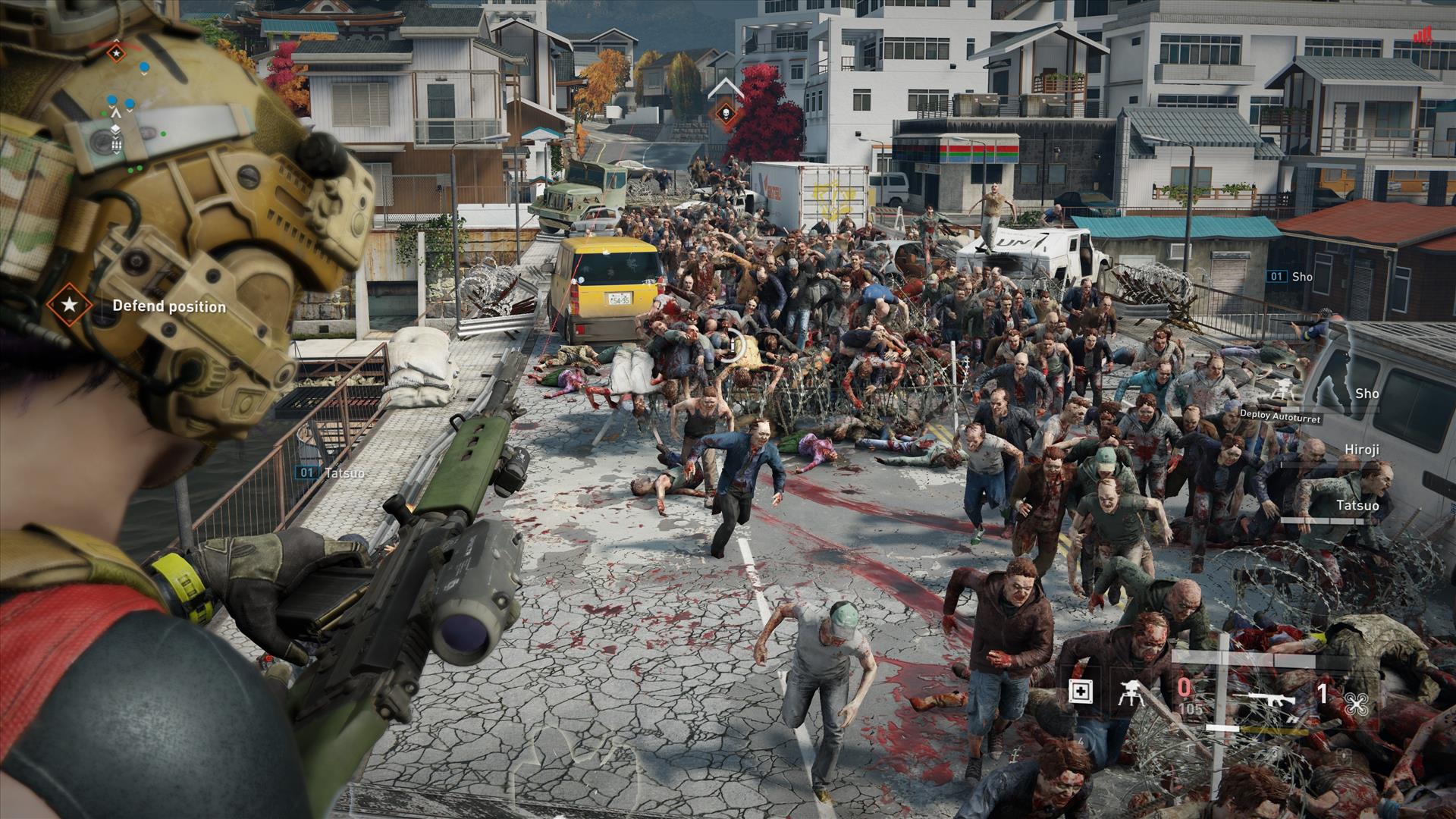 Another aspect of World War Z: Aftermath that sets itself apart from Left 4 Dead is its signature use of zombie hordes that was originally seen in the movie. The sheer sight of thousands of zombies running towards you puts a sense of fear and excitement down your spine as you reload your guns each time in preparation. Like in the film, the hordes pile up and form zombie pyramids to get to higher ground, which creates a spectacle to see and mow down with a machine gun. Thousands of zombies that fill up the screen don’t seem to tear up frame rates either, which is a pleasant surprise. An addition added in the Aftermath update are swarms of rats, which are very similar to the ones found in A Plague Tale: Innocence. Not only are these rats hard to spot, they are extremely difficult to deal with as they are resistant to bullets. The rest of the special zombies in World War Z: Aftermath are akin to ones found in Left 4 Dead, including a brute charger, a bomber, a screamer, a lurker, etc.

World War Z: Aftermath is visually stunning, with detailed renderings of real-life cities and locations. Gun designs are intricate and look incredible, in addition to the zombie hordes as they rush towards you. Sound design is also excellent, with characters fully voice acted and weapons sounding impactful and crisp. 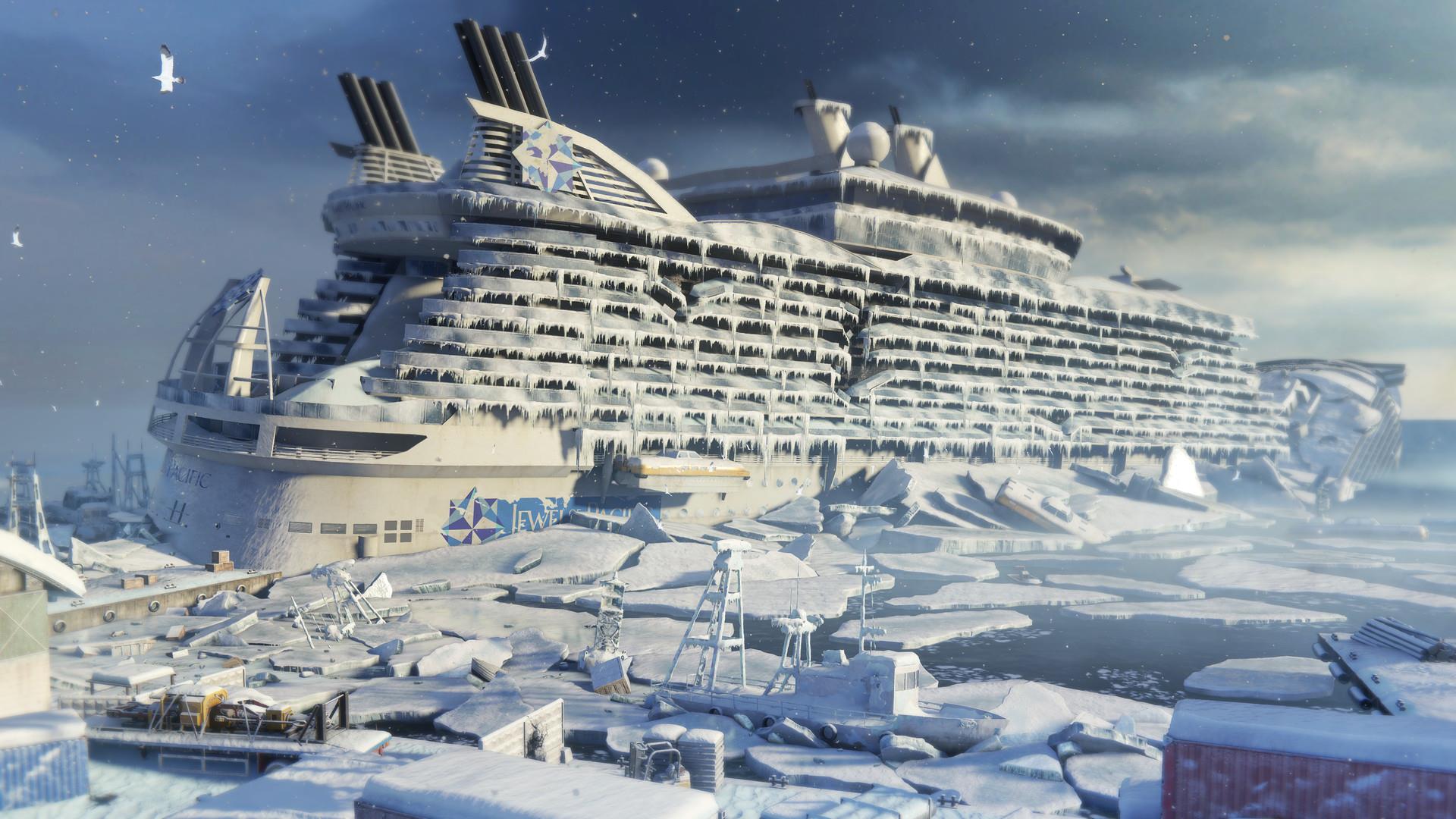 With the addition of Vatican City, Rome, and Kamchatka, Russia, World War Z now contains seven locations, with the original cities of New York, Jerusalem, Tokyo, Moscow, and Marseille. Each new map not only encompasses the title and narrative, being a world at war, but also feels refreshingly different. From the concrete jungles of New York all the way to the frozen ridges of Russia, each location emphasizes the difference in setting, both visually and aurally. A major design flaw of highly replayable games are their inevitable sense of repetition and tedium, but World War Z seems to keep this at a minimum. Keep in mind there is inevitable “copy and paste” content in any co-op zombie shooter. There is the typical point defend missions and such, but Aftermath contains a slew of other gameplay elements that make the game feel a bit more distinctive.

Each location follows four different characters and their mini arcs, allowing for a change of faces, in addition to setting. The two newly added story episodes add some new gameplay elements that differentiate itself from the original five locations. The Vatican City arc has you escort and defend a vehicle attached with an auto turret throughout the city. The Kamchatka arc introduces freezing cold temperature as a risk factor and forces you to find heaters scattered throughout the map to warm yourself. To further emphasize the need for teamwork, the Kamchatka episodes contain some communication-heavy puzzles that require the team to find and flip switches before the cold catches up to them. For a zombie shooting game, these added mechanics definitely amp up the immersion of actually living in an apocalypse. 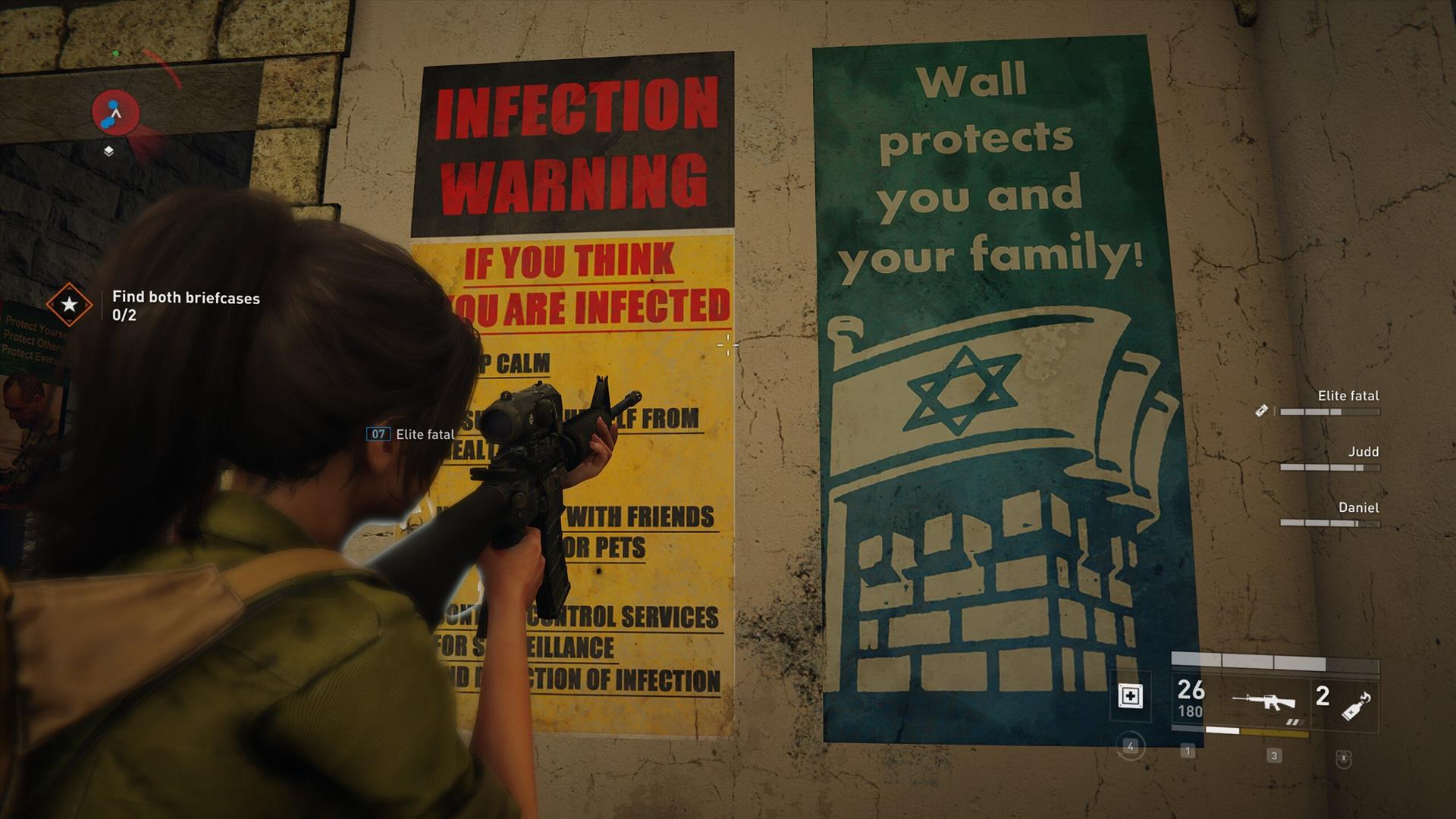 Aftermath introduces an improved melee system with the addition of the dual sickles weapon. In the base game, melee attacks simply hit zombies to push them away. Now, melee attacks can string combos depending on which weapon you use. The dual sickles are quick and can combo multiple times while providing life steal. Heavier weapons such as the sledgehammer or axe are slower to hit but do area of effect damage.

A major complaint about the vanilla game is its poorly designed online play. There still is no region-specific server, so you could be playing with someone halfway across the world with horrible ping. Public lobbies do not exist and you join games by queuing up for a particular mission to see if someone random is also queuing up for the same one. The developers added private lobbies though, so you can play with a group of friends with ease. Running the game on a GeForce GTX 1070, I did face some stuttering and frame drops, albeit minor. The game also crashed once when playing cooperatively online, but for the most part ran without issue.

The Aftermath update to World War Z magnifies an already solid cooperative zombie shooting game. It possesses a staggering amount of replayability that doesn’t quite come off as repetitive due to its vast selection of difficulty levels, maps, modes, and classes to choose from and progress in. There are some odd design choices with the first-person perspective mode, and a few minor bugs, but none of that took away from my positive experience. With a humble price point, World War Z: Aftermath can very well compete with triple A titles of the same genre. If you are a fan of Left 4 Dead or are just looking for a new game to play with a couple of friends, this game is a must play.

With its deep progression system, vast array of locations and classes, World War Z Aftermath is an excellent play for anyone looking to shoot up some zombies with their friends.