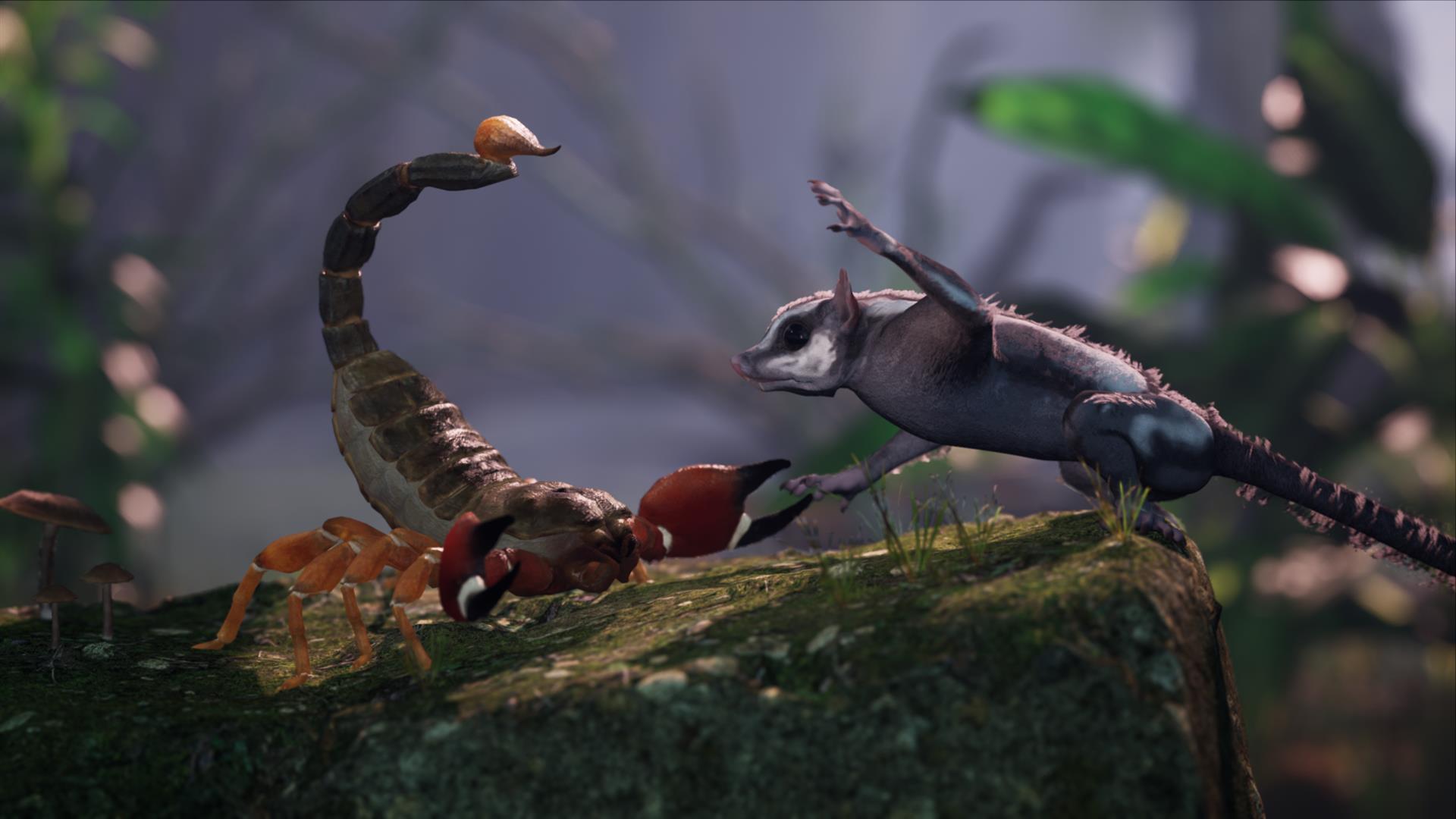 AWAY: The Survival Series

“What if you could play a nature documentary?”

This is the question that greets players on the homepage of the Away Series. Truth be told, I’ve been a fan of documentaries such as Planet Earth, Mission Blue, and anything with the legendary David Attenborough narrating the program. Away: The Survival Series captures all the feeling of a nature documentary while providing players an interesting protagonist in their action-oriented game, the lovable sugar glider. It’s a bold choice of a genre, and while it’s not without some faults, there’s a quiet elegance to this game that made me enjoy my experience overall.

Right out of the gate, Away hits you with some rather startling news as you’re taking control of a young joey: Earth has suffered a catastrophic event and the island your sugar glider is inhabiting is all that’s left. Without getting into spoilers as there are a couple of plotlines going on, it’s strongly suggested that mankind is the reason for the downfall of the planet. 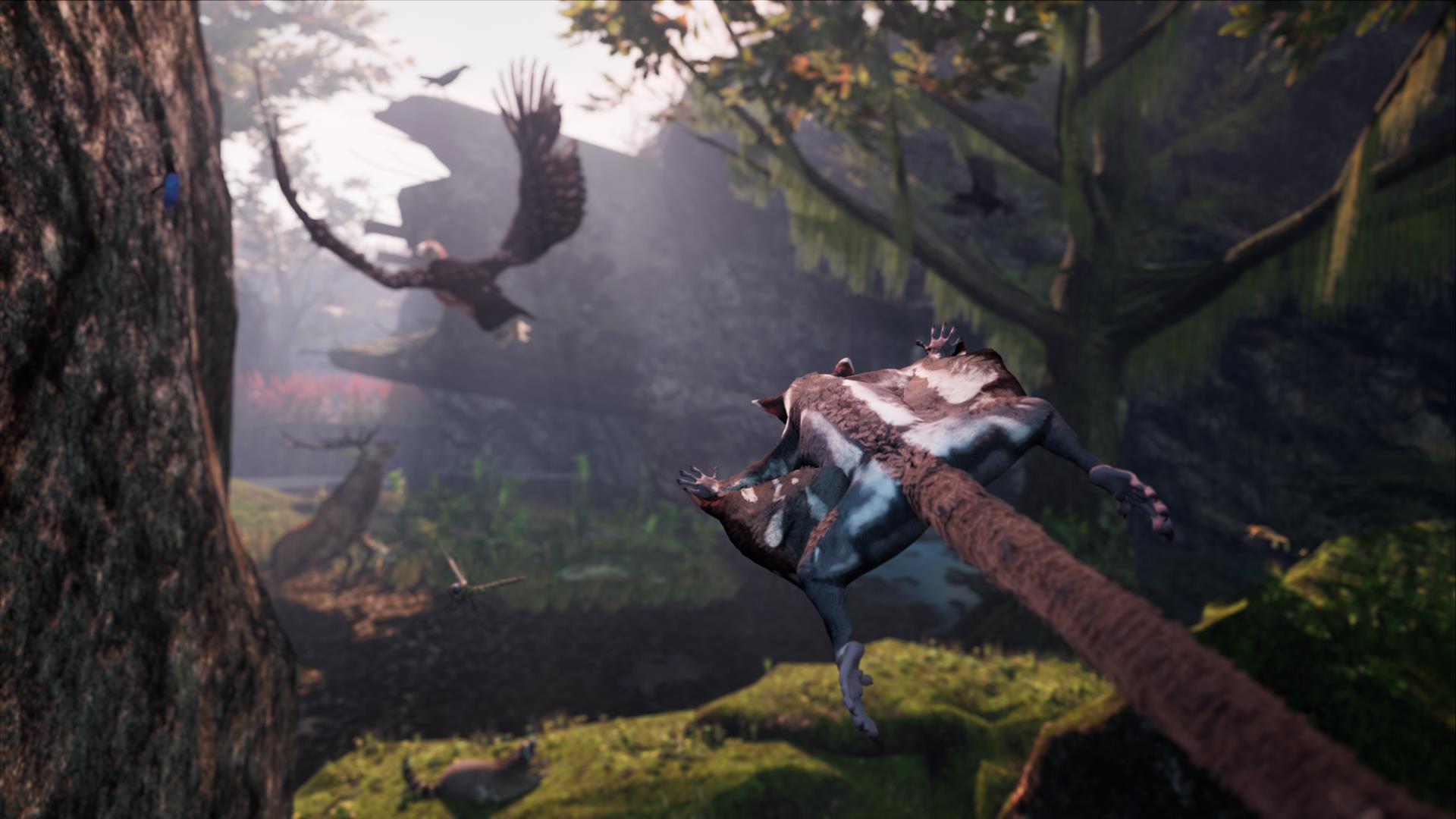 Away throws you into the mix right away: The opening thirty minutes lets the player get used to the controls, which are fairly simplistic: Running, jumping, climbing, gliding and attacking. There are a couple of advanced controls such as quick dodges and higher leaps that are utilized, but it’s nothing I would call difficult. This game doesn’t have the feel of an overly difficult title and falls under the category of “pick up and play” action.

The documentary feel of the game comes into play from two sources: The orchestral soundtrack that has some wonderful pieces to set the tone of the game from Mike Raznick, who has worked on pieces that are included in Planet Earth II and Life. While the narration isn’t provided by the aforementioned Attenborough, it certainly made me double check the credits to confirm it wasn’t. The English commentary is provided by Andrew Robinson, and he does a great job telling us about the sugar glider, the enemies it encounters, and the world surrounding the player.

Gameplay started out buggy, but an update has helped.

As previously mentioned, the controls are simple. You’ll find yourself running more than anything while the attacks with both claws and mouth are accompanied by the accurate yelps and barks of the glider, including growls that I couldn’t help but giggle at because even those sound adorable. 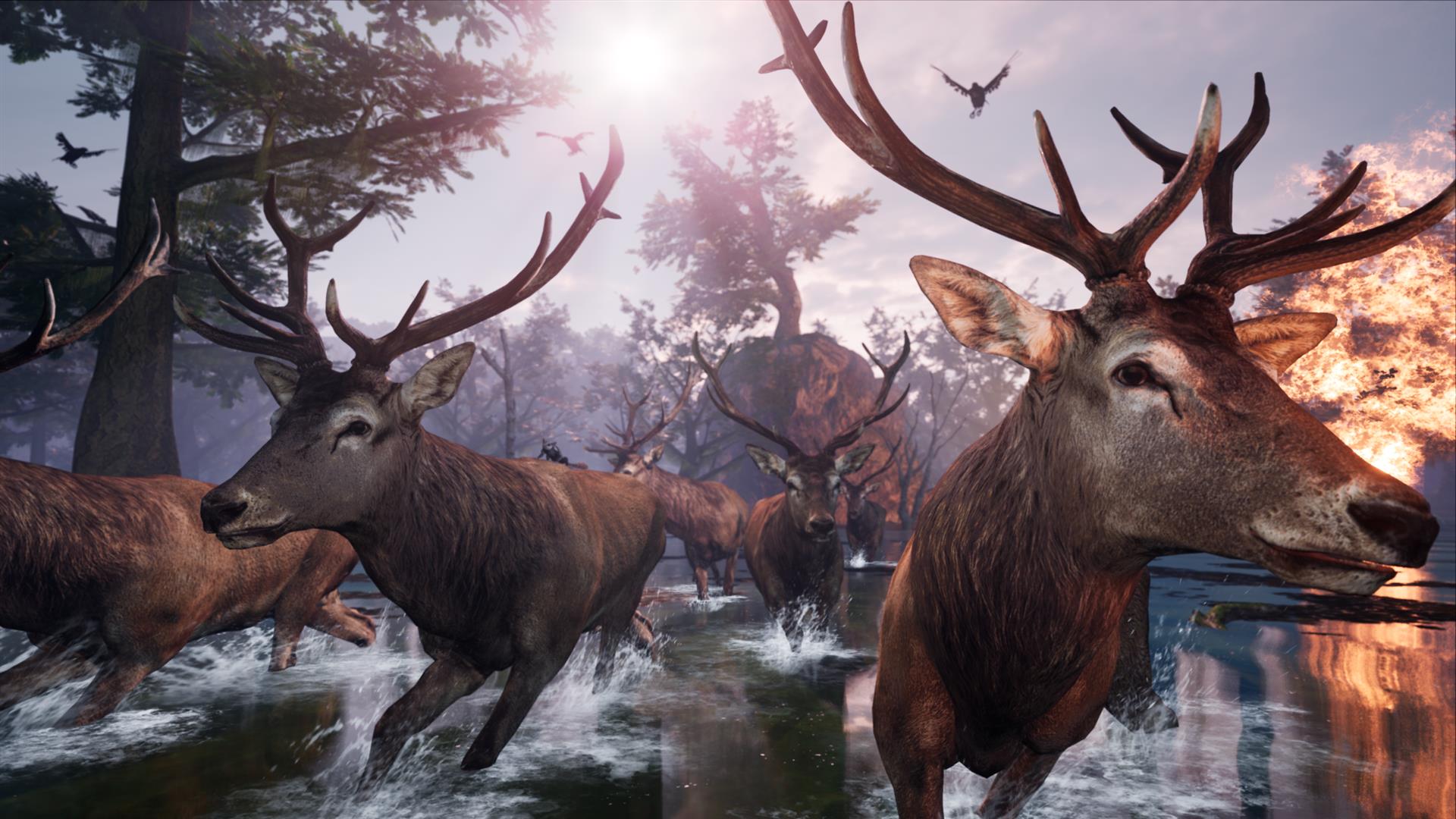 My first couple of hours were rough, though. The gameplay had quite a few bugs, including mushrooms getting launched into the air upon eating one and sending various insects into orbit doing attacks. Food got stuck to my sugar glider and it took getting damaged or trying to eat another one to get rid of it. Another bug was with the sugar glider randomly getting tossed off of trees, as can be seen by Twitch streamer Fossilphase below. Be sure to give her channel a click as she’s an entertaining V-Tuber who took a keen interest in this game as she has sugar gliders as pets, and they are adorable.

Fossil played through the entire game and overall enjoyed the experience like I did, but the bugs were still there.

While that one was quite entertaining just for the flight factor involved, this one was more egregious, with a wolf clipping through a tree while Fossil attempted to escape.

My bug experience was primarily with leaping and combat, but a patch has gone through since my first playthrough and the overall feel of the game is cleaned up. It still has some issues, but the patch certainly helped.

Gliding with the sugar glider is easily the most fun in this game. There are several times where gliding will save you from a sticky situation, but the sequence in chasing after a vulture while going over a river was not only difficult but beautiful and enjoyable. Away ramps up the difficulty only a few times, but it does it when it counts.

The gameplay, as I mentioned before, is nothing difficult. The goal is to keep the joey alive by eating bugs and mushrooms while progressing through the island on a mission to save your mother and sister. Combat only gets tough when facing predators, including scorpions, spiders and snakes that you can kill. However, as you saw in the clip above, there are times when you have to use stealth and strategy to bypass an area with wolves, foxes, and other larger predators. They can’t be killed by your adorable glider.

It took me roughly five hours to get through the story. While the main goal is saving your mother and sister, there’s a plot going on that explains what happened to mankind. The narrator gets personally involved at one point when discovering holo-videos of scientists who are trying to save mankind. Admittedly, I did not find all of these videos and I feel I missed some vital information, which will make me go back and play it again to see if I can track them all down. Finding these are purely extra and can be bypassed without penalty, but the extra story narration is worth it.

Exploration mode is different from the story as it allows players to go through the same world as many different creatures besides the sugar glider. It requires finding them along the way to take control of them, giving players an extra goal if they’re looking for 100% completion. Do you want to play as a praying mantis? That’s something you can do! You’ll get some narration in the exploration, but not as much as the primary story.

Should you play it?

This game is catering to a niche audience and it’s not going to be for everyone. If you’re looking for fast-paced action and death-defying stunts, this won’t be for you. This title is directed at those looking for something more relaxing and even educational while enjoying a beautiful world. It’s currently on Steam for $29.99 but I’d recommend waiting for a sale or another patch to come through. It’s rough around the edges still, even with the first big patch that hit. 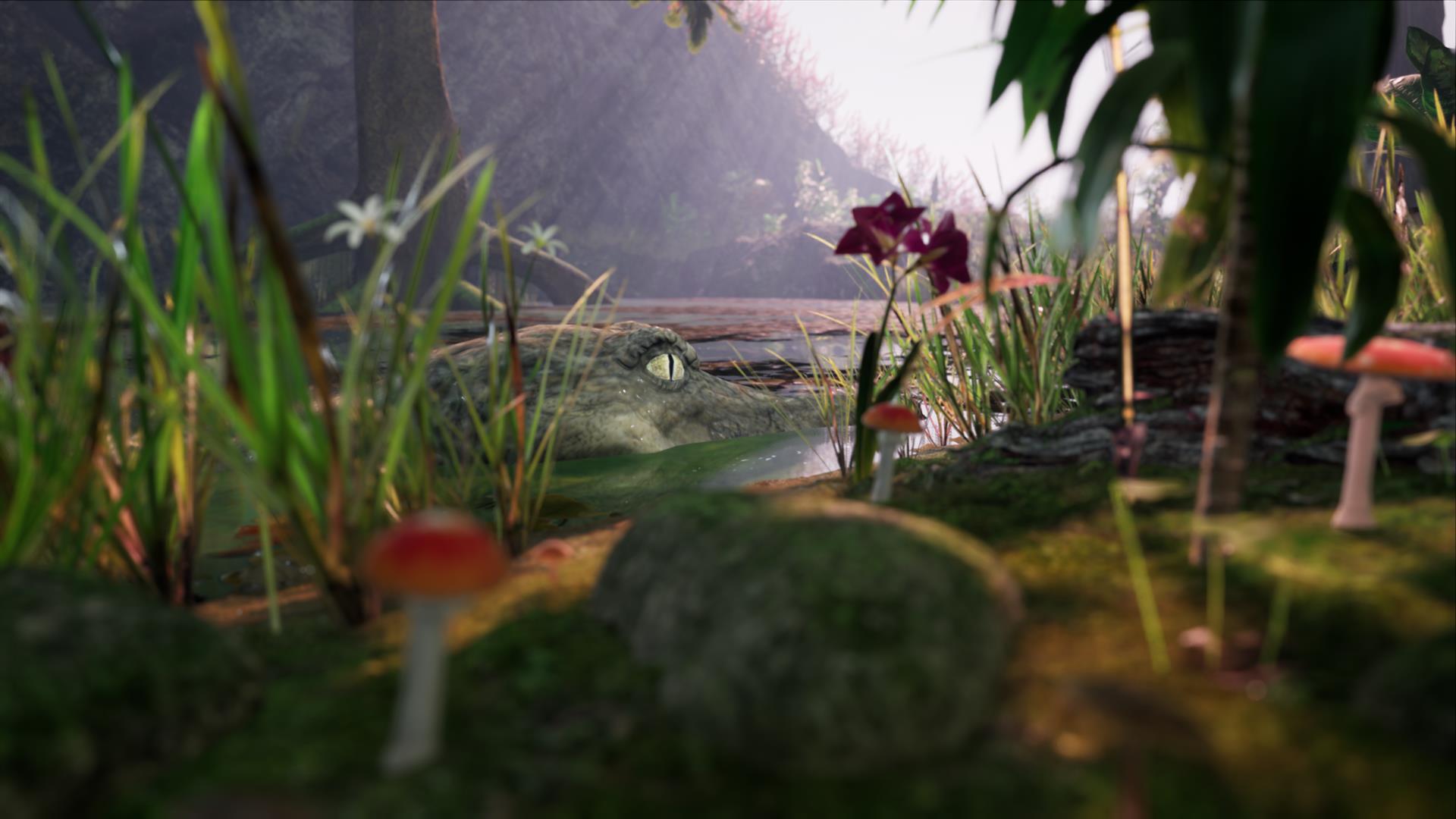 If you can get this game on sale, perhaps with the upcoming Steam Winter Sale, then it’s worth pulling the trigger to try it out. Between the story and exploration mode, you’ll probably get ten hours out of the game but I can see how people could get lost in the world for longer if it really latches onto them.

It’s far from perfect and still has some bugs that create humorous moments, but there’s a simple elegance to a title such as Away. It’s certainly not for everyone and those who love documentaries will get the most out of the game. Honestly, I feel like this game caters not only to those who love documentaries but perhaps children who are interested in nature and want to learn. It’s a far cry from the simplistic learning games I grew up with and far prettier.

The beauty of Away: The Survival Series isn't the gameplay but the journey itself. While it has it's problems with bugs, the environment itself is lovely and the narration and musical score at least give the short expedition a quiet elegance.