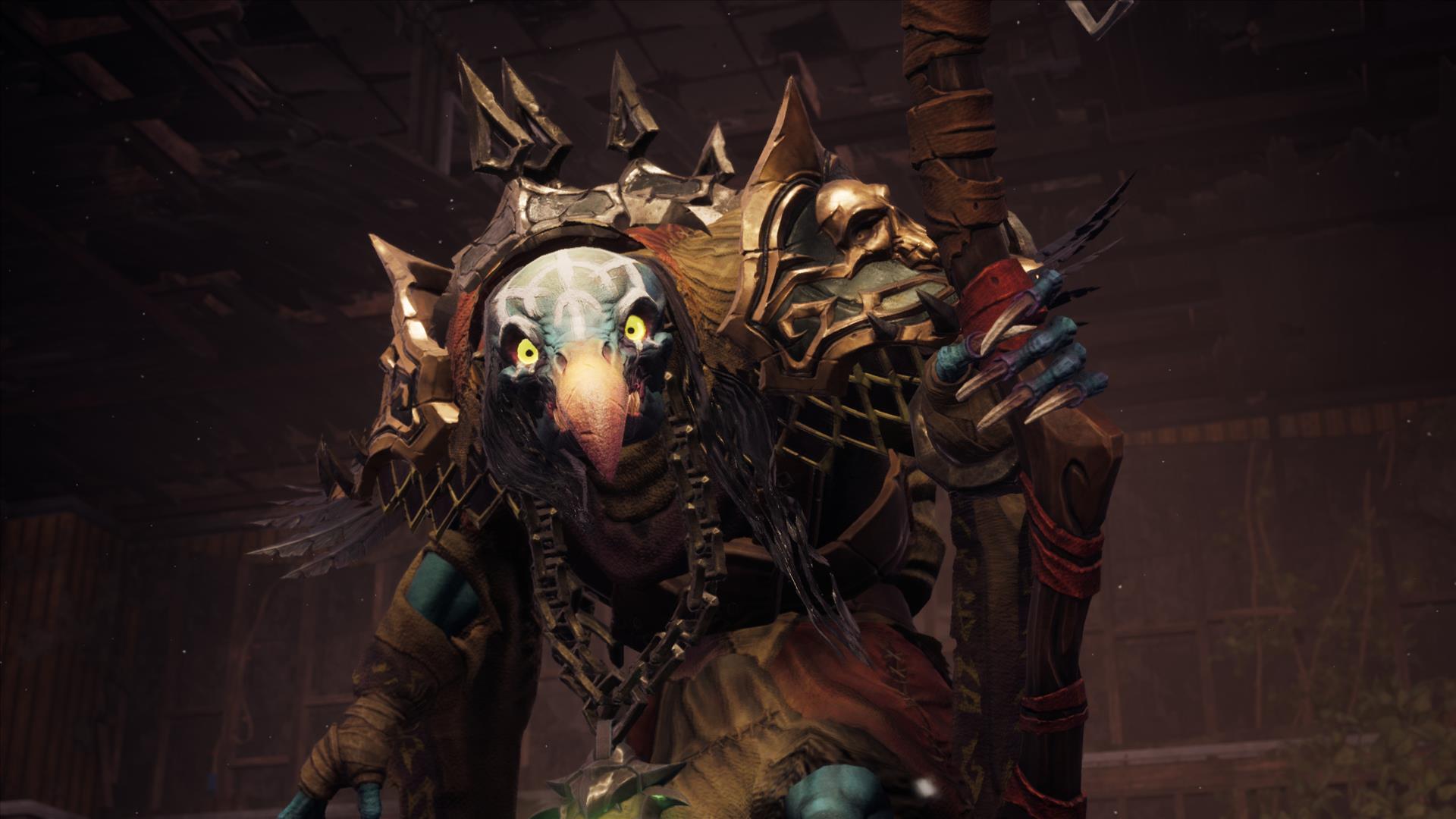 Written by Elliot Hilderbrand on 10/22/2021 for SWI
More On: Darksiders III

I want to give you, the reader, a little bit of behind the scenes when it comes to reviews. At least here, at Gaming Nexus we aim to beat the game we’re reviewing, within reason. Some games just don’t quite work that way. An example of that was my review of Tribes of Midgard. I tried, but I was not successful in defeating the seasonal boss before my review came out. But I feel that I put in enough time and gotten pretty far into the game to be able to judge almost all of its content. We aim to beat the game whenever we are able to. With Darksiders III I was able to beat the game, but at no point did I really want to. In fact I felt like the game did everything it could to prevent me from enjoying it.

As with the first two games in the series, you play as one of the four horsemen (or in this one a horsewoman) of the apocalypse. In the first two games, players take control of War and Death, both of their stories playing out parallel to each other. The same is the case here, this time with Fury, this time being tasked with taking down the Seven Deadly Sins. I love a sequel—or sidequel if you’ll allow the pun—that doesn’t require me to know exactly what took place in a prior game, especially one that originally came out in 2010. 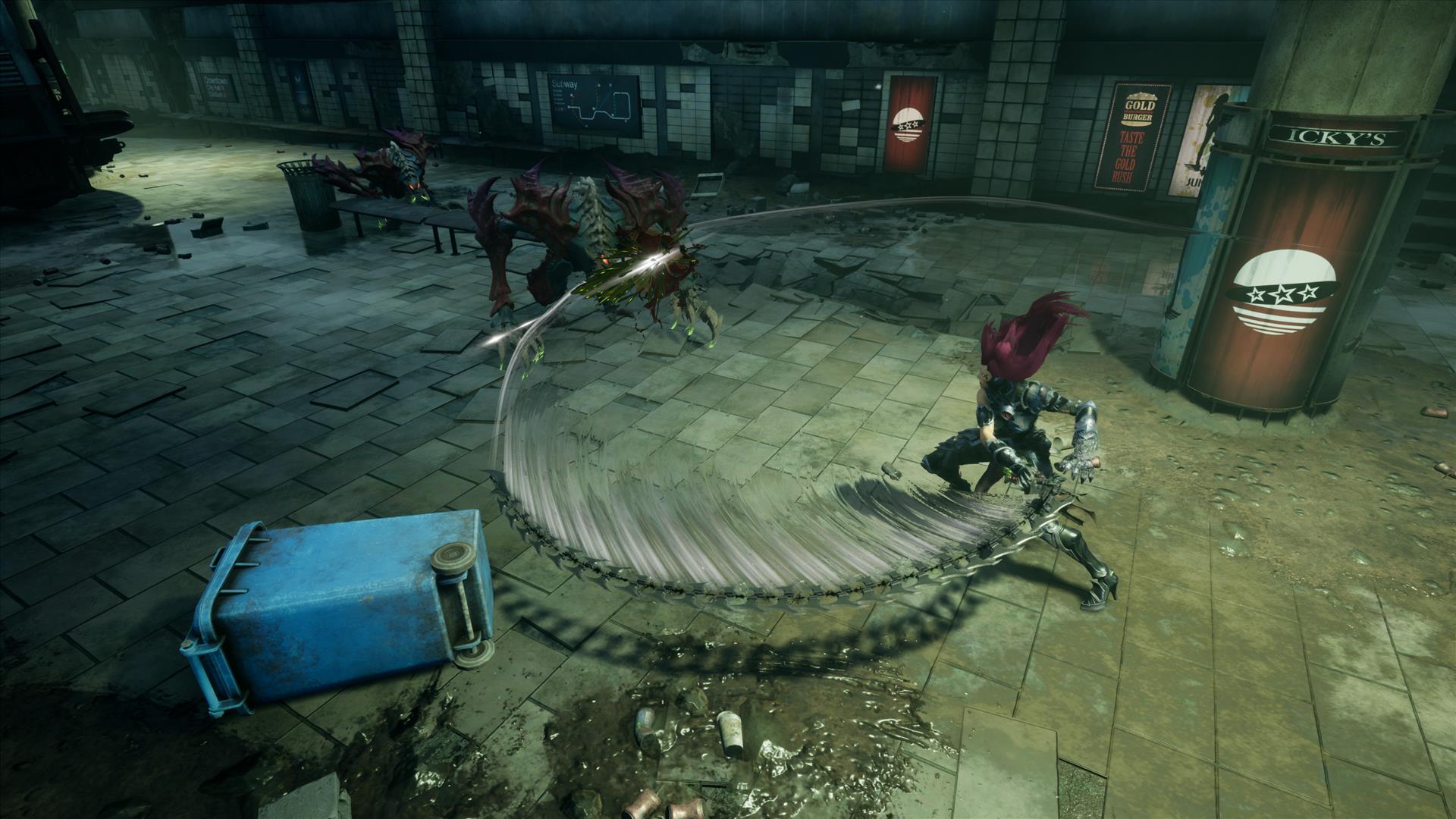 As the story plays out, you see that not is all it appears to be. As I said, Fury starts out with the task of taking out the seven deadly sins: Pride, Gluttony, Lust, Sloth, Avarice, Wrath, and Envy. I enjoyed the uniqueness of each one and got a little excited to see what the next one looked like when I encountered them. I found the twists and turns made throughout that game were one of the few things that kept me continuing my playthrough.

Darksiders III plays out as a handful of genres. Previous titles came off as a hack and slash game, but Darksiders III wants more than that. It wants to be a thinking man's hack-and-slash. The game wants you to dodge attacks and then counter them, punish enemy AI for doing something stupid. It’s akin to another popular style of game, Dark Souls. I personally found it very off-putting. I think my biggest gripe with this style of combat was the lack of tight controls. I feel I would push the dodge button in enough time to actually dodge, only for the screen to show me getting hit. It turns out I’m not alone in thinking this style just doesn’t work because the developers created a whole new playstyle for this release: a “classic” mode that harkens back to the original two games. Players are able to to go back and forth between either style, the “classic” or “default,” as they choose. Moving to the classic did make the game more enjoyable, but I still struggled with the controls overall. 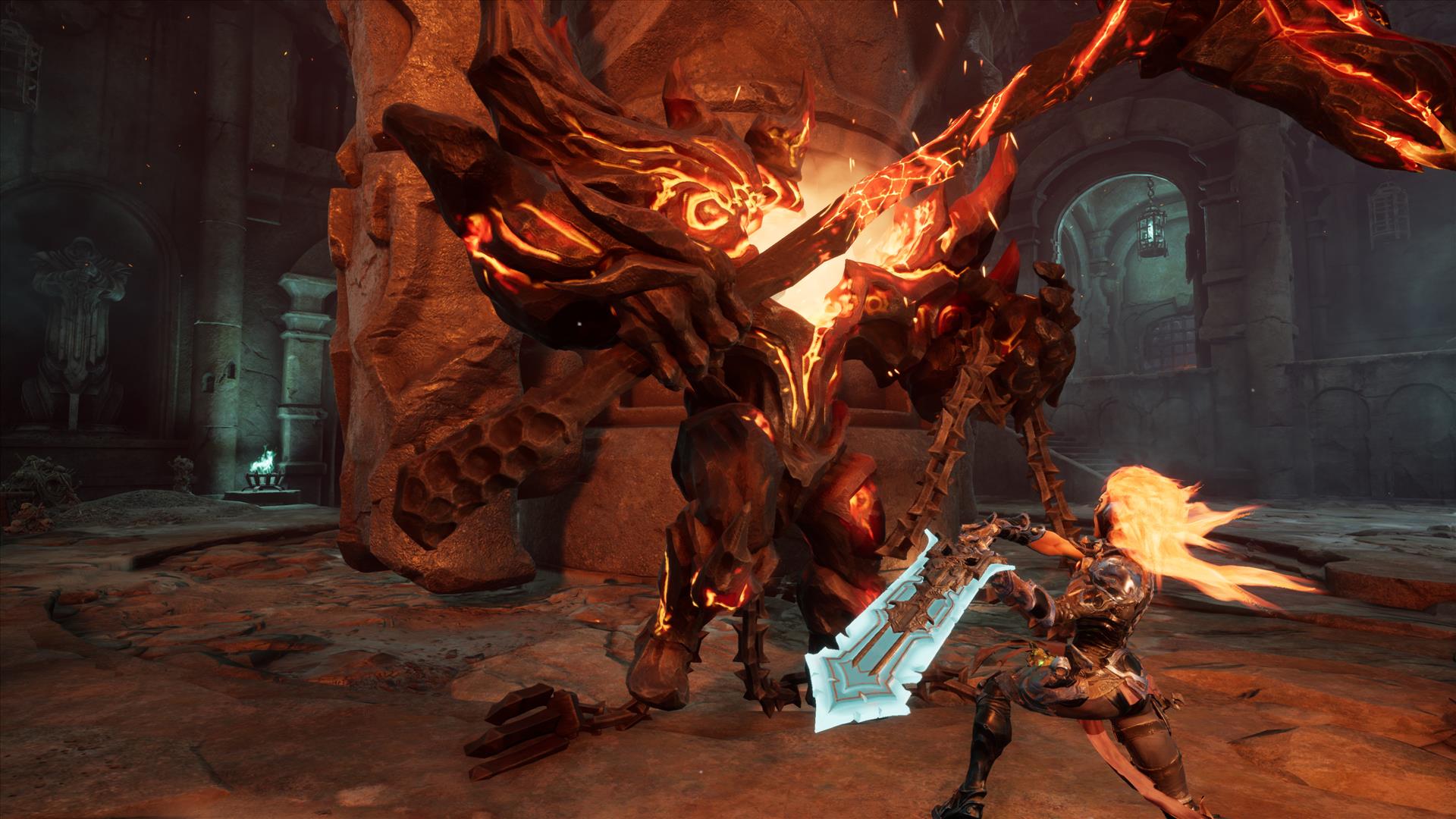 Besides moving Fury around, the overall control scheme left me constantly frustrated and angry. One of Fury’s weapons is a whip that allows her to Indiana Jones her way around maps, grappling onto objects and rope swinging around. But the problem was the input connection between when I told the controls to grab ahold of a tree and when Fury would actually try to grab ahold of it. I found myself jumping to my death over and over again. I would come to the conclusion that I needed to push the button earlier, when that didn’t work I would try later. It seemed as though it didn’t really matter, and would be random luck at times if I pushed the button at the correct time or not.

Along with swinging comes the other important mechanic to the game, dodging. Fury is supposed to dodge and retaliate against the opponent. But the dodging is so wacky that I found myself just spamming the dodge button instead of watching the screen for an incoming attack. When a mechanic is part of the foundation to the gameplay, I need it to work without much problem. This was simply not the case. Thrown on top of that is a frame rate that occasionally goes bonkers and the recipe for disaster is right there. 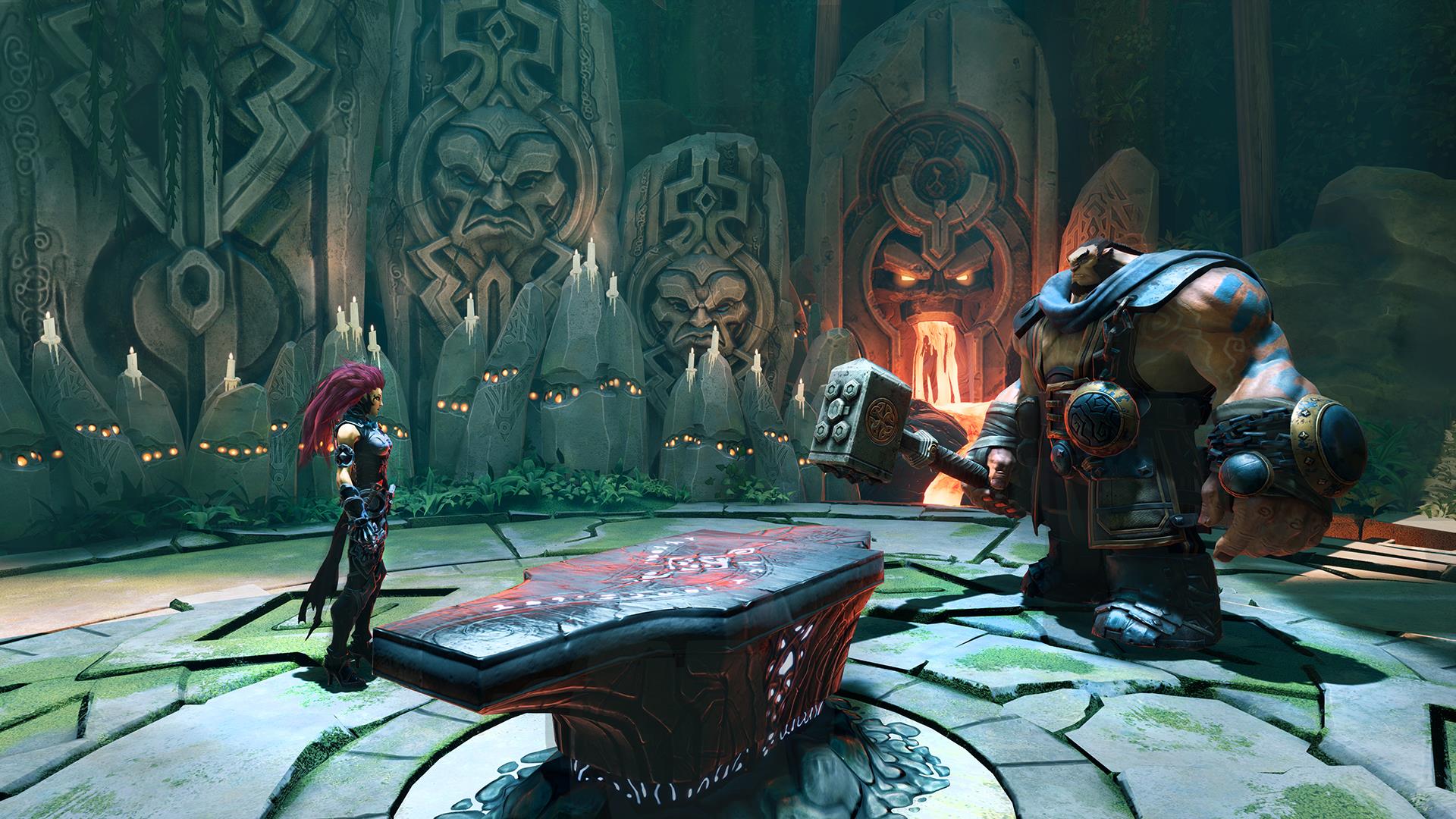 I have said earlier that Darksiders III wears many hats when it comes to the genre department. Another one of those would be Metroidvania. The game wants to feel like it’s an open world, that you can go out searching for whichever Deadly Sin you want, just use the map as your guide. However that simply isn’t true.

In order to progress to certain areas you need certain moves which you learn as you go. Eventually I learned this, but not before I spent 20 minutes trying to cross a bridge I was never going to be able to pass at that time. 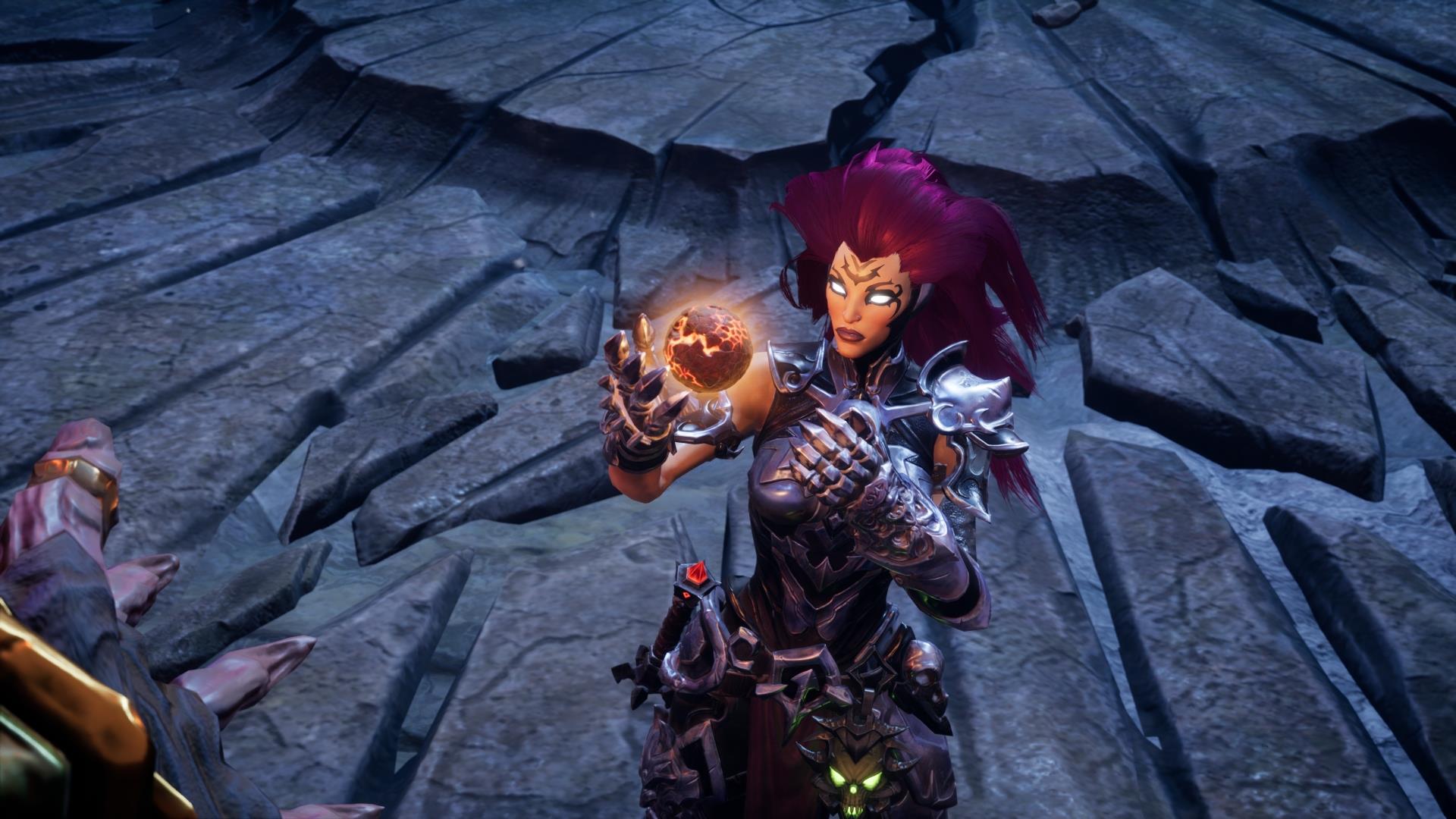 Darksiders III also doesn’t hold your hand in any way at all. Normally I would love to figure things out on my own. But when I’m supposed to know that I need to knock a hive down off a ledge and then let a bug come and eat the hive and then pick up that bug and throw it so it will explode into a web to progress without teaching me this in any way before hand, I can’t do it. I’m not a smart man.

On top of the lack of showing you anything, there is also a ton of backtracking to be done in game. I would constantly go as far as possible, only to find something blocking my way because of some special move I haven’t learned yet. I would then have to backtrack to find the small hole I didn’t crawl through when I should have, or some puzzle that gave me no indication it was a puzzle to progress. I spent hours just trying to figure out the correct direction to go rather than fighting baddies. 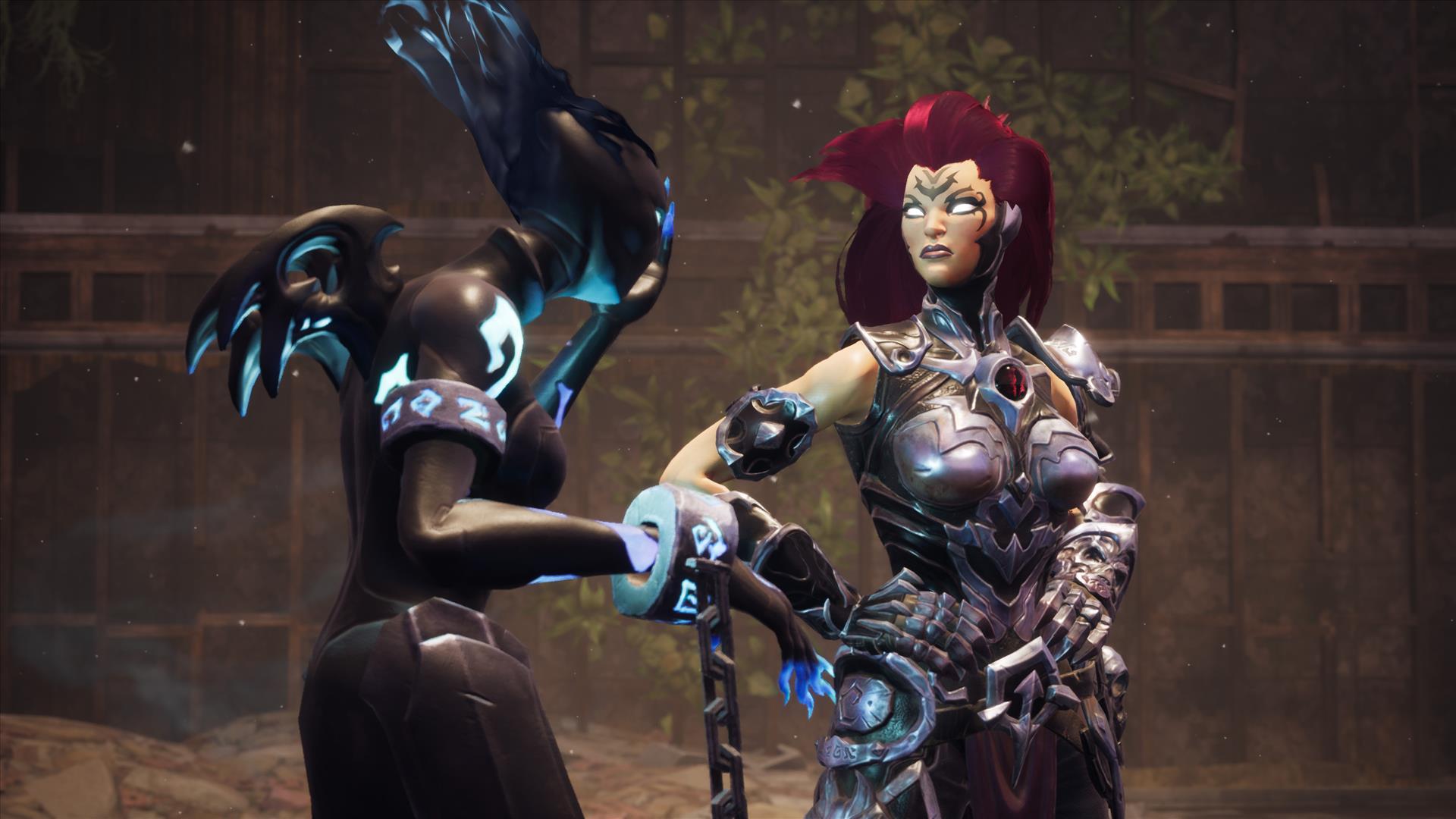 I was over the game within the first hour. I struggled to have Fury do what I was inputting on the controller. I would fall off ledges, if I even made it to them. I was getting hit left and right regardless of when I was dodging. The frame rate would jump me forward at just the wrong moment and I would fall off a ledge. I couldn’t find where to go next after clearing an area, and even when I did find someplace to go it would turn out that it wasn’t the right place, because I hadn’t unlocked the special move that would allow me to progress.

Darksiders III has a great story, and characters that are just cool to look at. I also enjoyed being able to switch between the default and classic playstyle whenever I felt like it. I didn’t enjoy the lack of direction given, often backtracking and spending too much time finding the right way to head. If I wasn’t trying to complete the game for a review I don’t think I would have found the energy to finish.

The art and story of Darksiders III is engaging and beautiful to look at, even in this remastered take on the game. Adding a new game option to make the game more like its predecessors was very welcome, but not enough to save the game. Controls that don't respond when you want them to make the game frustrating in times of peril. Expecting players to understand what direction to go, or how to solve a puzzle without teaching them mechanics before hand made my time with Darksiders III unpleasant.