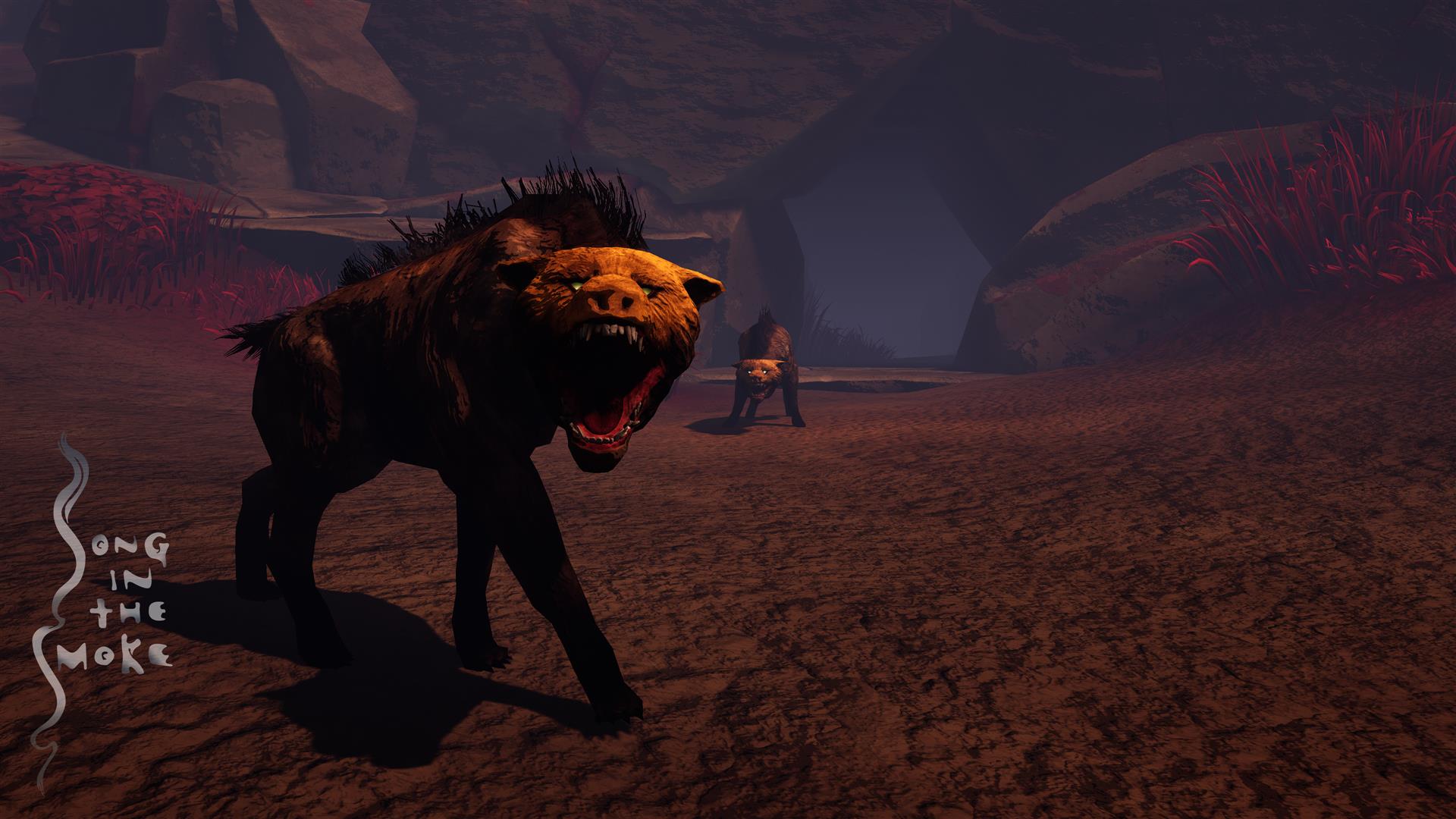 Song in the Smoke

Over the last year or so, I’ve come to realize that I’m kind of over VR. I went hard on PlayStation VR when it arrived, playing almost every game that arrived for the platform. As releases slowed to a trickle, I pivoted over to the Oculus Quest 2, only to find that, for me, the novelty has worn off. With my family buzzing around the house, I just don’t want to spend hours on end with a contraption strapped to my head, living in an alternate world while my wife tends to our kids. It takes a very special game these days to convince me to spend more than an hour or two in VR.

Song in the Smoke is just such a game. While many VR games are brief (likely for the very reasons I mentioned), Song in the Smoke is a full-sized game, pulling the player ever further into its mysterious world through the promise of stellar level and sound design. Song in the Smoke makes me want to live in its world for a while, and it's been a few months since a VR game tapped my imagination quite this deeply. 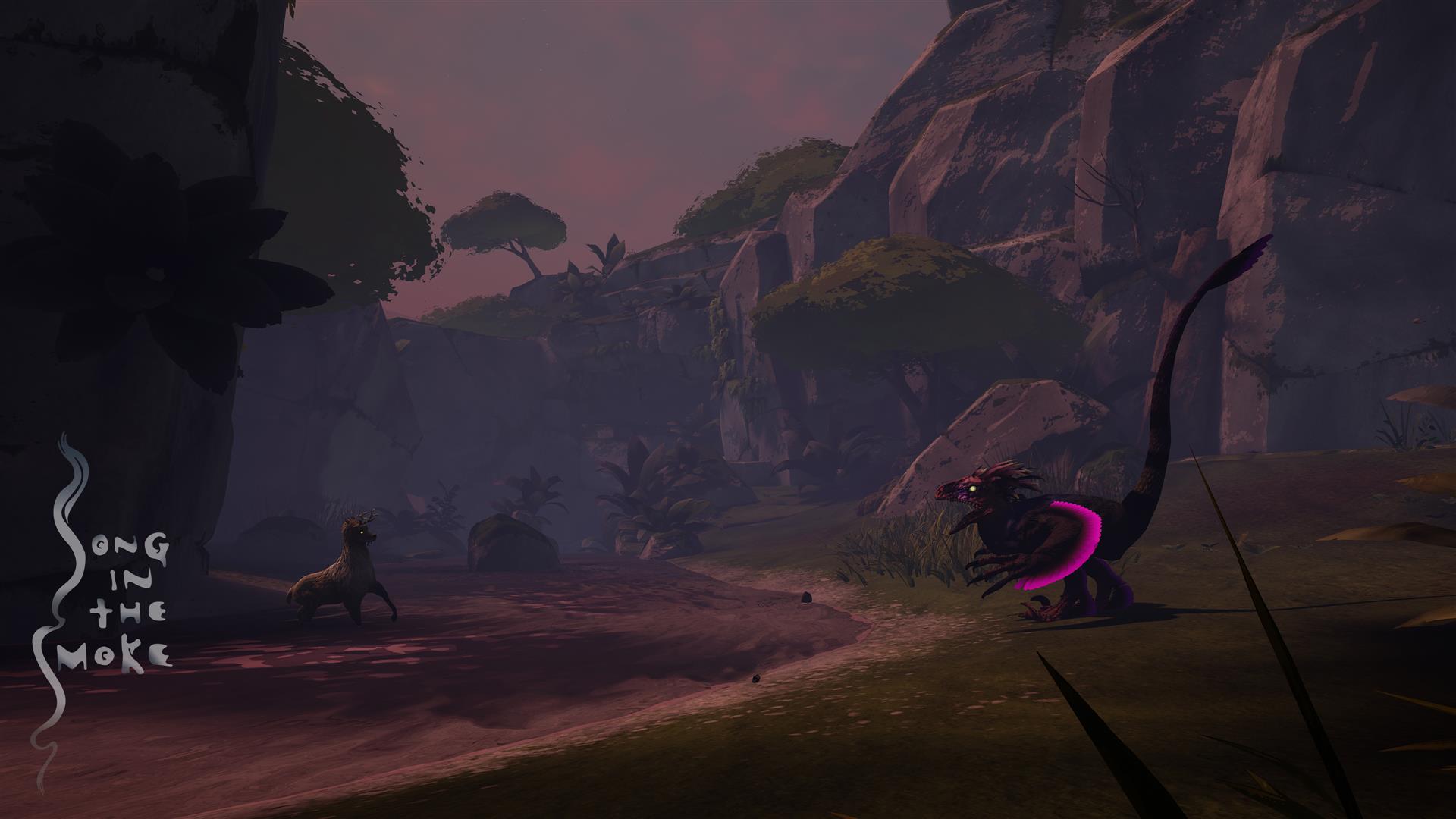 Song in the Smoke is a survival game, set in a beautiful but terrifying primordial world. This is a game that transcends the usual VR boundaries in so many ways, it is almost unimaginable that Song in the Smoke is developer 17-Bit’s first foray into virtual reality. Almost everything that has grown to irritate me about VR games over the years has been remedied here; controls are smooth and effective, worlds are large and immersive, and perhaps most importantly, I can pick stuff off the ground with ease.

It amazing me how often VR games screw up the act of picking up and handling objects. It is the most frustrating thing about playing in VR, a medium that is all about simulating tactile interactions with objects. But Song in the Smoke handles this aspect of VR gaming gracefully, allowing the player to simply point at an object and levitate it up into their hand. And unlike a lot of games that attempt this mechanic, in Song in the Smoke it actually works. Another tap of a button, and–poof!–the object disappears into your inventory. 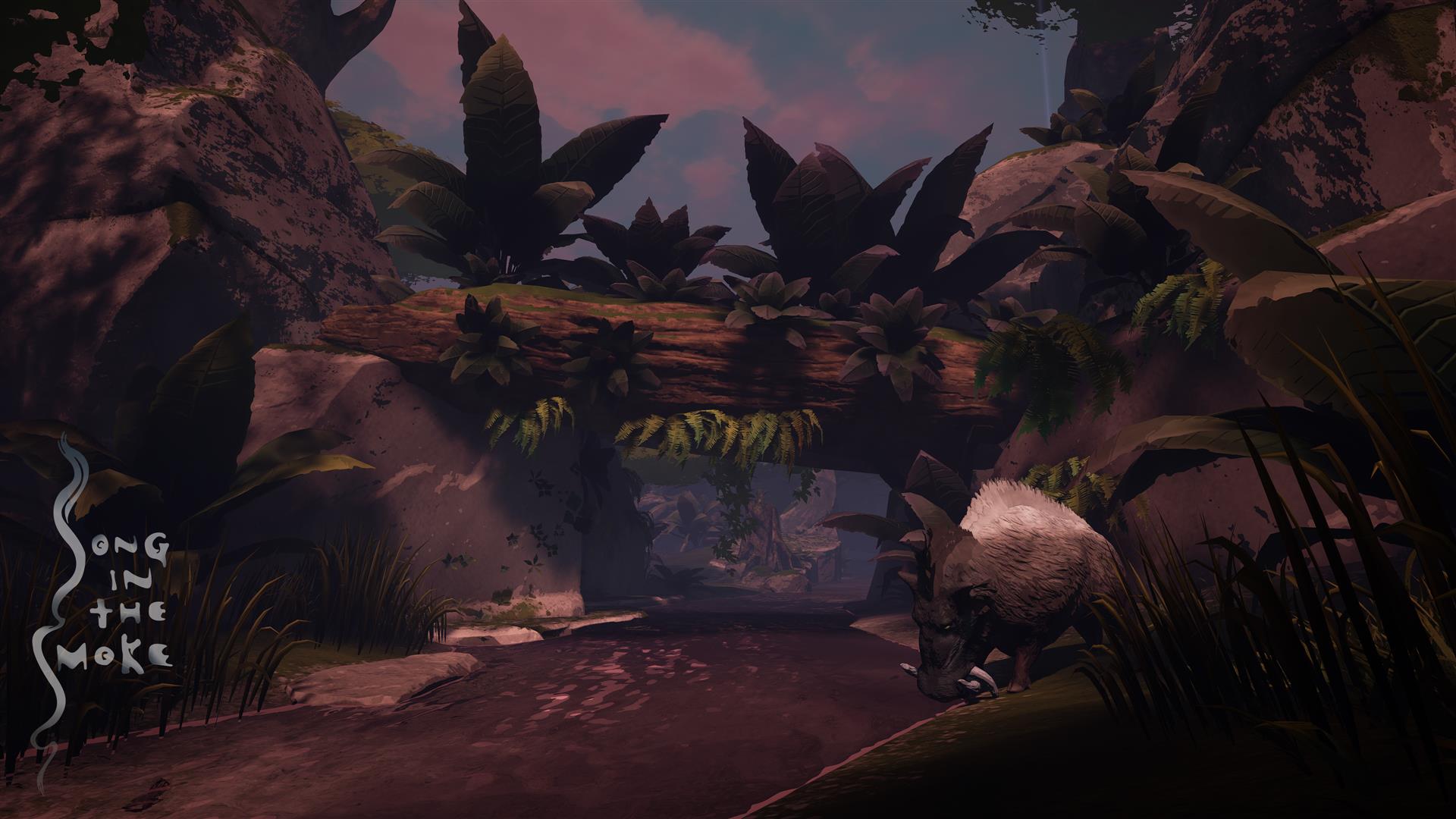 Almost every mechanic in Song in the Smoke works well. Crafting has never been more intuitive than it is here. Grab a stick. Sharpen it with a rock. Now you have a spear. Need a healing potion? Take a flower, throw it on the old mortar, and get to pestling. Assembling items with multiple resources is often as simple as holding them together for a brief time. A little puff of smoke, and your objects have become something new. Everything works just the way you want it to, and there is very little in the way of the usual VR fiddling and fumbling.

Motion is handled with a unique combination of smooth locomotion and teleportation. For wandering flatter areas, you can simply cruise around with the left analog stick, turning with the right (I used 45 degree snapping turns, which worked out well for me; smooth turning makes me a little queasy). For climbing or changing elevation, holding a button on one of the controllers allows you to teleport instantly up or down. The game generally won’t allow you to hurl yourself off of a cliff, so falling isn’t an immediate danger. 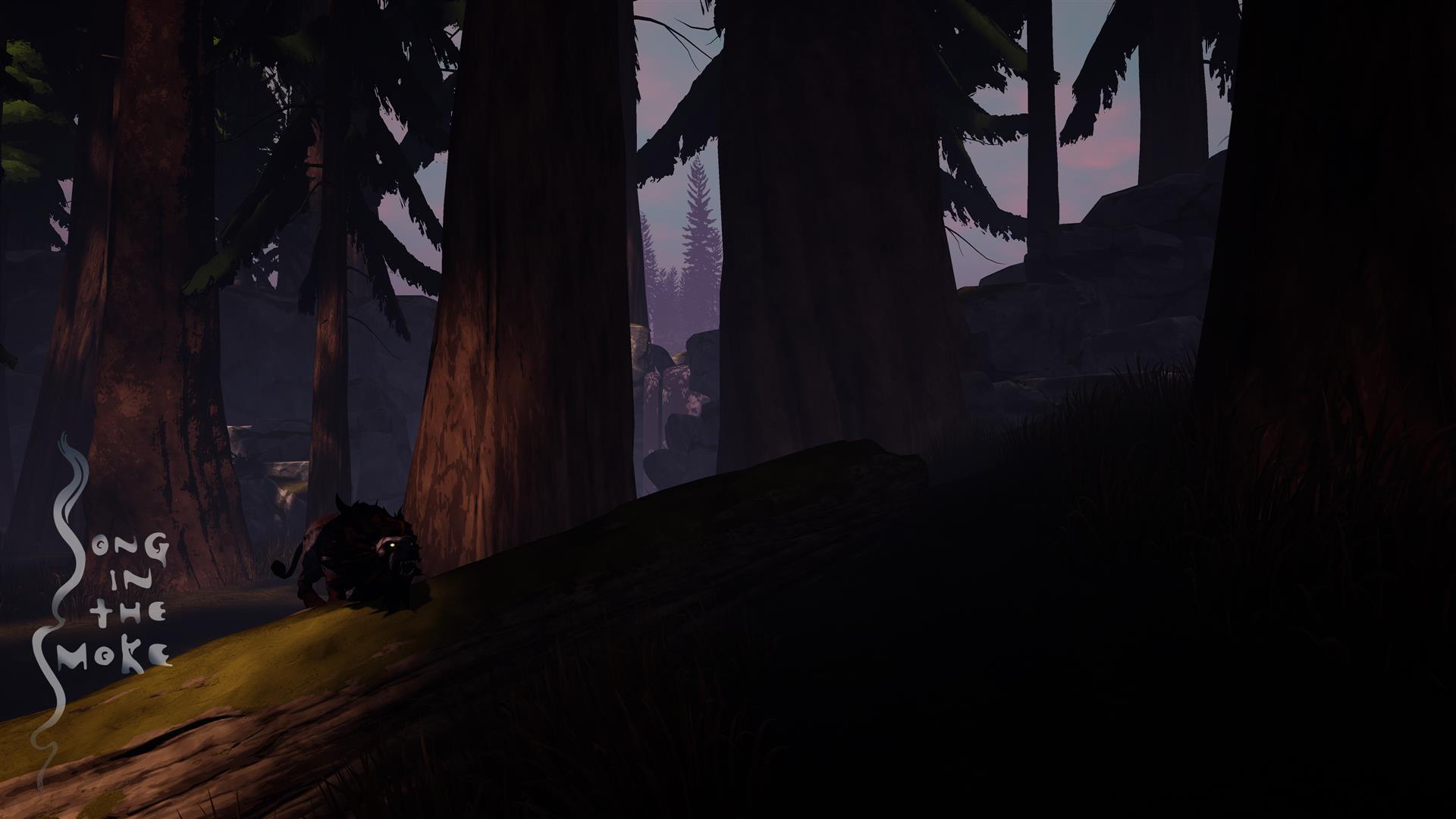 After a brief but thorough tutorial, the game deposits the player into a series of large, explorable areas. The mission in each area is to find three glowing purple-ish stones, which then activate a boss fight elsewhere in the level. Beat the boss, and it’s off to the next area, with each successive level increasing in difficulty. Brief cut scenes tie the experience together.

But laying out the gameplay loop in such simple terms sells Song in the Smoke short. Thankfully, there is no time limit pushing players to get through a level, so as long as you can forage enough food to keep on truckin’, there’s no reason to rush. A day and night cycle encourages the player to rest in the evenings and explore in the day, which is generally advisable due to the dangers found lurking in the dark. I found the exploration in Song in the Smoke to be one of the best parts of the experience, and the game rewards the player for doing so with fun pick-ups and collectables. 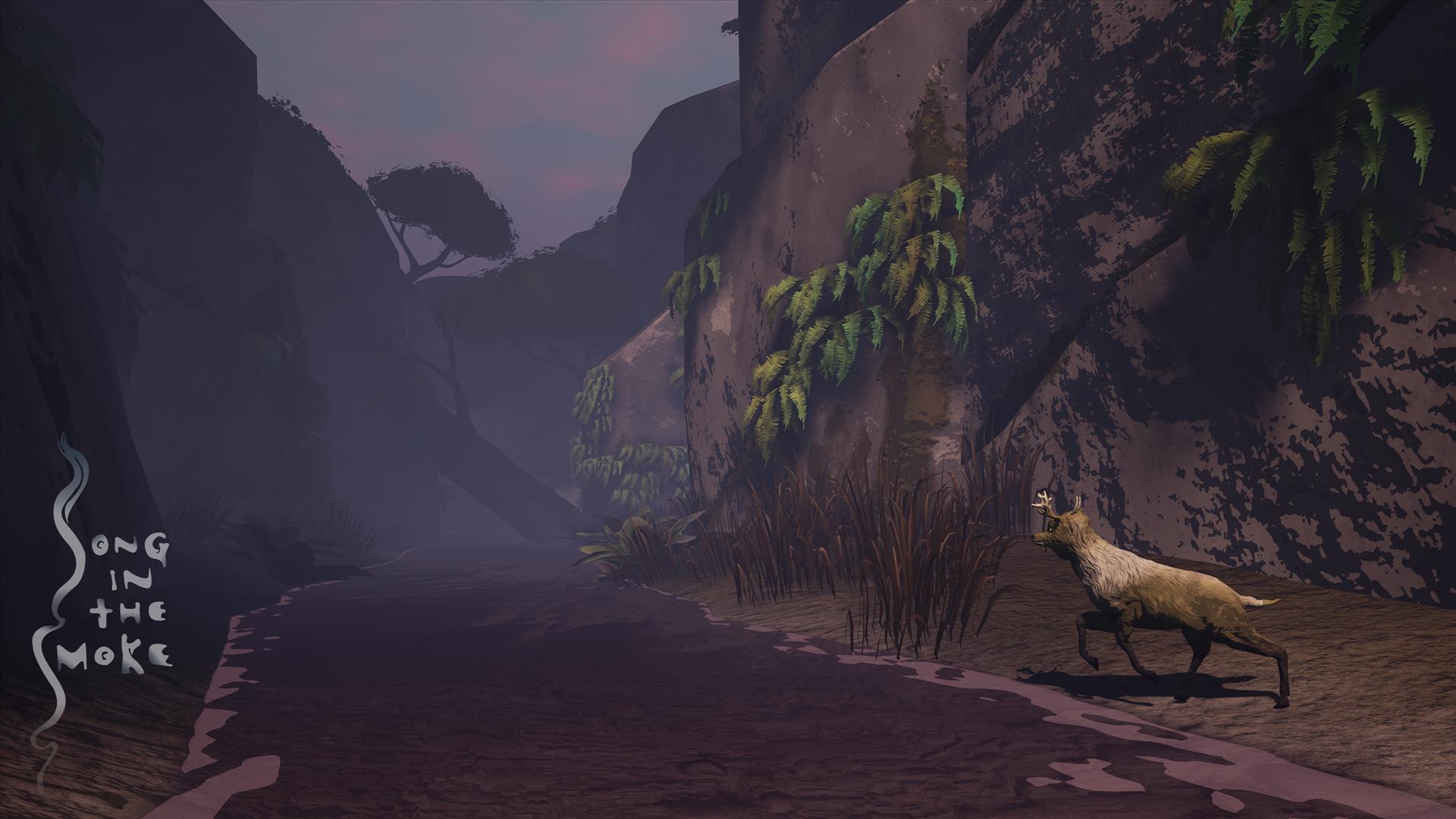 The world design in Song in the Smoke is stylized, but effective. Though the world is rendered with a somewhat cartoonish style, it still feels dank, and oppressively dangerous. Song in the Smoke makes great use of shadow and a light, moist fog, causing the player to feel as though death could be lurking around any corner, crouched in any nearby bush. Much of this is due to the sound design, which signals nearby beasts rustling about in bushes, causing some fairly serious heart palpitations. I get lazy playing on Quest, often just relying on the built-in speakers rather than wrangle an actual headset, but Song in the Smoke inspired me to immerse fully with some noise-canceling headphones.

Hunger and fatigue are tracked via a neat bit of UI strapped to the player’s wrist. Simply look down at your hand for a quick take on what your current needs are, as a number of little, easily read meters there will tell you everything you need to know. Food is plentiful at first, but expect to have your resources stretched to the limit by the end of the game. 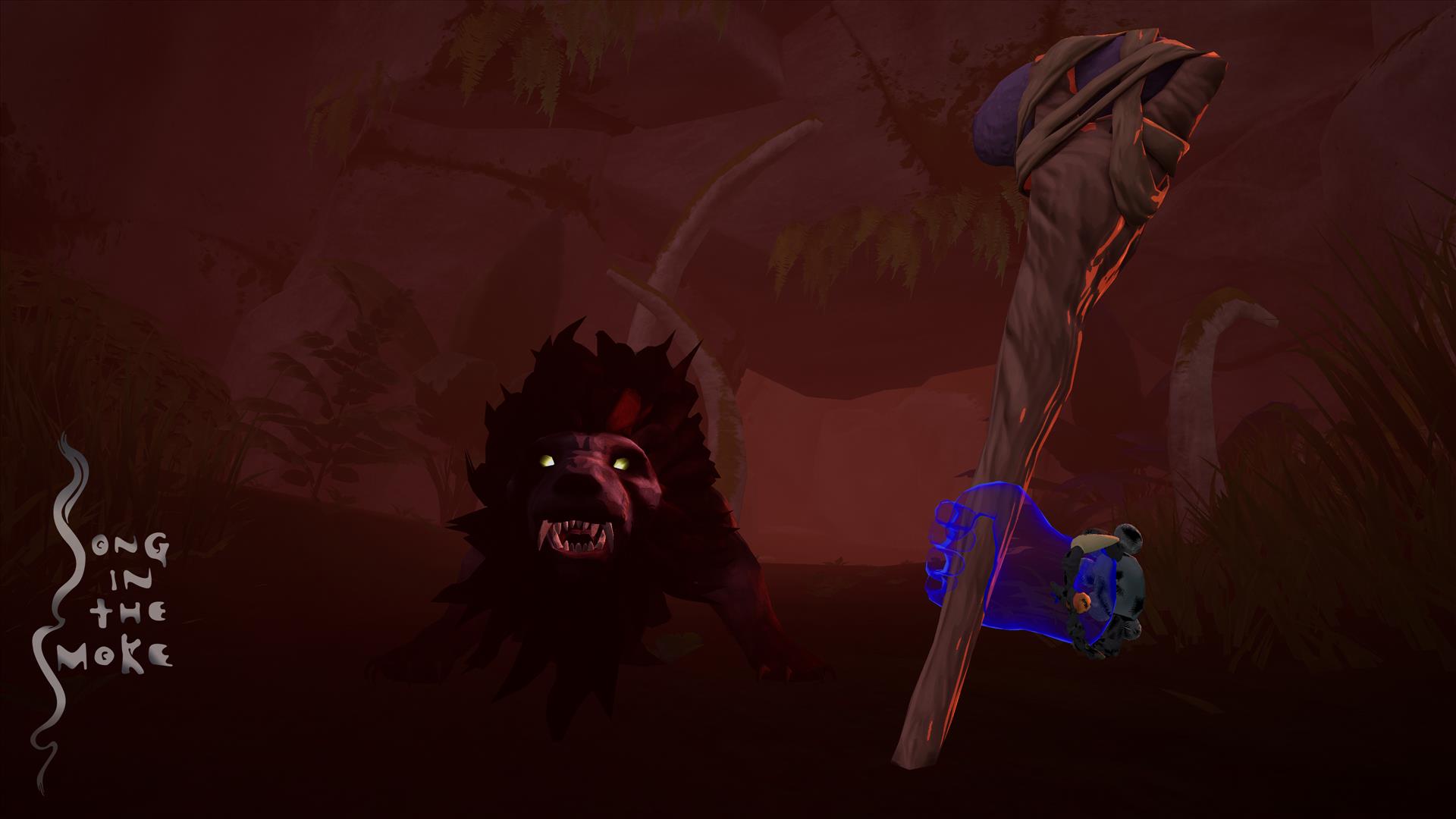 Unlike most modern games, there is no autosave system. Instead, the player must build a campfire to save, with a limit of three campfires per level (though you can return to older campfires if you want to reuse them). This save system feels like a bit of a miss, though I can understand why the developers felt that they should limit saves, as doing so creates a dynamic where the player must think strategically about where and when to create fires and save. Additionally, fires can be used as tools to dry skins and cook food, which makes considering where to place them even more important. Pro tip: try not to create fires where rain can reach them. Just sayin’.

Song in the Smoke feels like a bit of a minor miracle; a polished, full-featured survival game by an indie developer new to the format. The fact that these folks pull it off better than so many others that have been working in VR for the last five years is beyond impressive. I won’t try to say that you’ll have an easy time with Song in the Smoke, but you will have an interesting and enjoyable time. Come for the stellar VR mechanics, and stay for the creepy mood and fun exploration. This one is good enough to break your headset back out if you've been letting it collect dust. Games like Song in the Smoke signal what VR games could be, which has restored a bit of my hope for the future of the format.

Song in the Smoke excels with fantastic controls and VR mechanics, accomplishing some things that veteran VR developers still struggle with. A full-sized, immersive experience, Song in the Smoke is not easy, but it is engaging and fun.