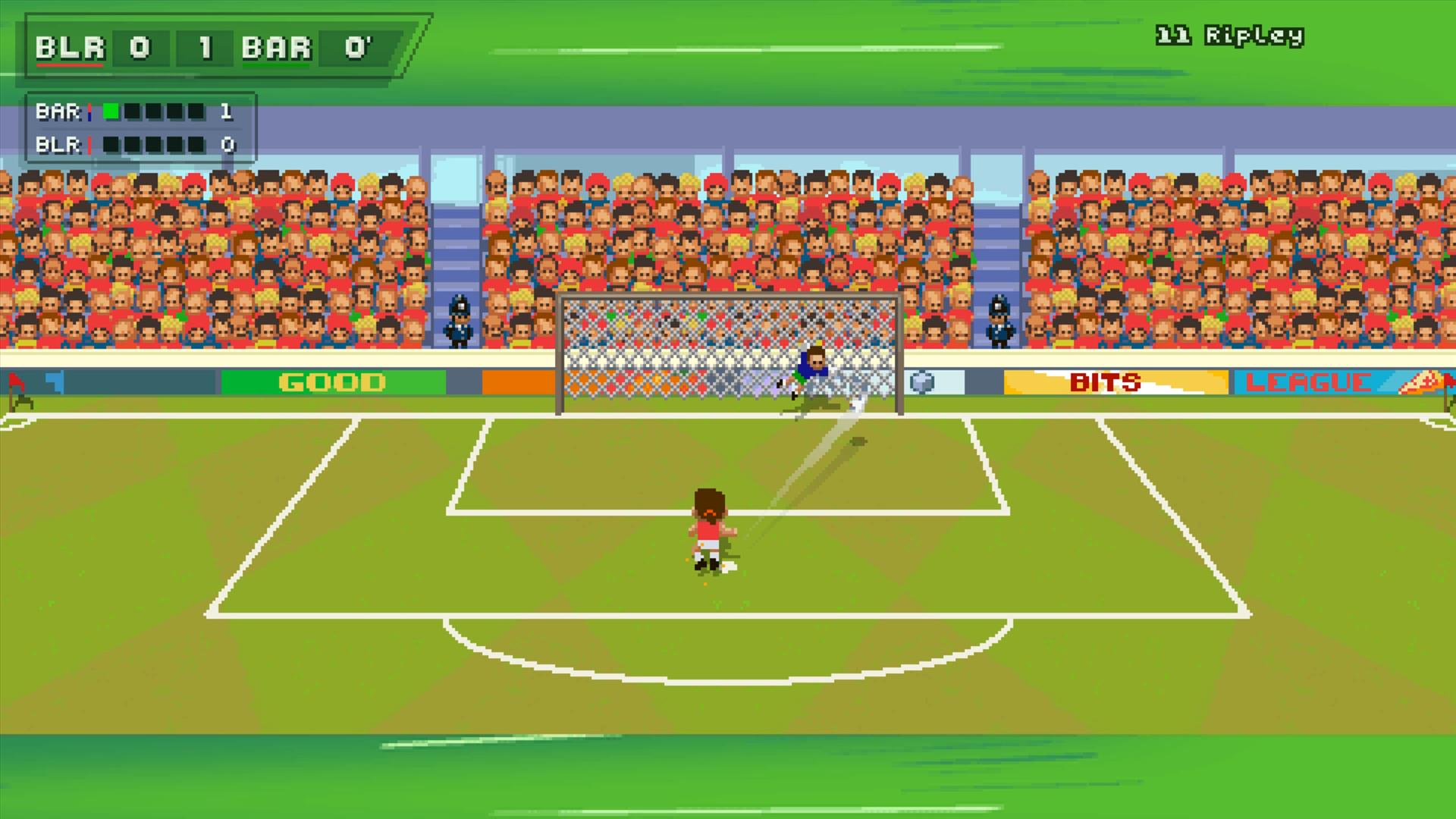 Written by Elliot Hilderbrand on 10/8/2021 for SWI
More On: super arcade football

I love to watch sports. It doesn’t matter what sport is currently in season, I’m at the very least up to date with the big developments, who’s winning the league, how my favorite team is doing in the standings, that sort of thing. Except soccer, it just doesn’t do it for me. When it comes to sports video games, though, it’s a completely different story.

I rarely search out a sports game to play, and when I do it’s usually one with unconventional gameplay. I tend to lean towards sports games that take the sport and add something to it that you wouldn’t find normally: racing to your next shot in golf,  or running so fast in football your legs are set ablaze. Super Arcade Football has enough goofiness in it to have me play till the end, but not enough for me to keep coming back by myself for seconds.

First things first. When I talk about football from here on out I’m talking about European football, better known as soccer to some of us. You’ve been warned.

The campaign for Super Arcade Football starts with a short story intro. Your favorite football club has fallen on tough times, and unless you can take them from zero to hero the rival football club is going to buy up your stadium and turn it into condos, or a shopping center, something. It doesn’t really matter because it doesn’t really get brought back up. You have to play, and win. The absence of a story doesn't bother me. I don’t really need gripping storytelling when I’m playing a sports game. You just play the game. 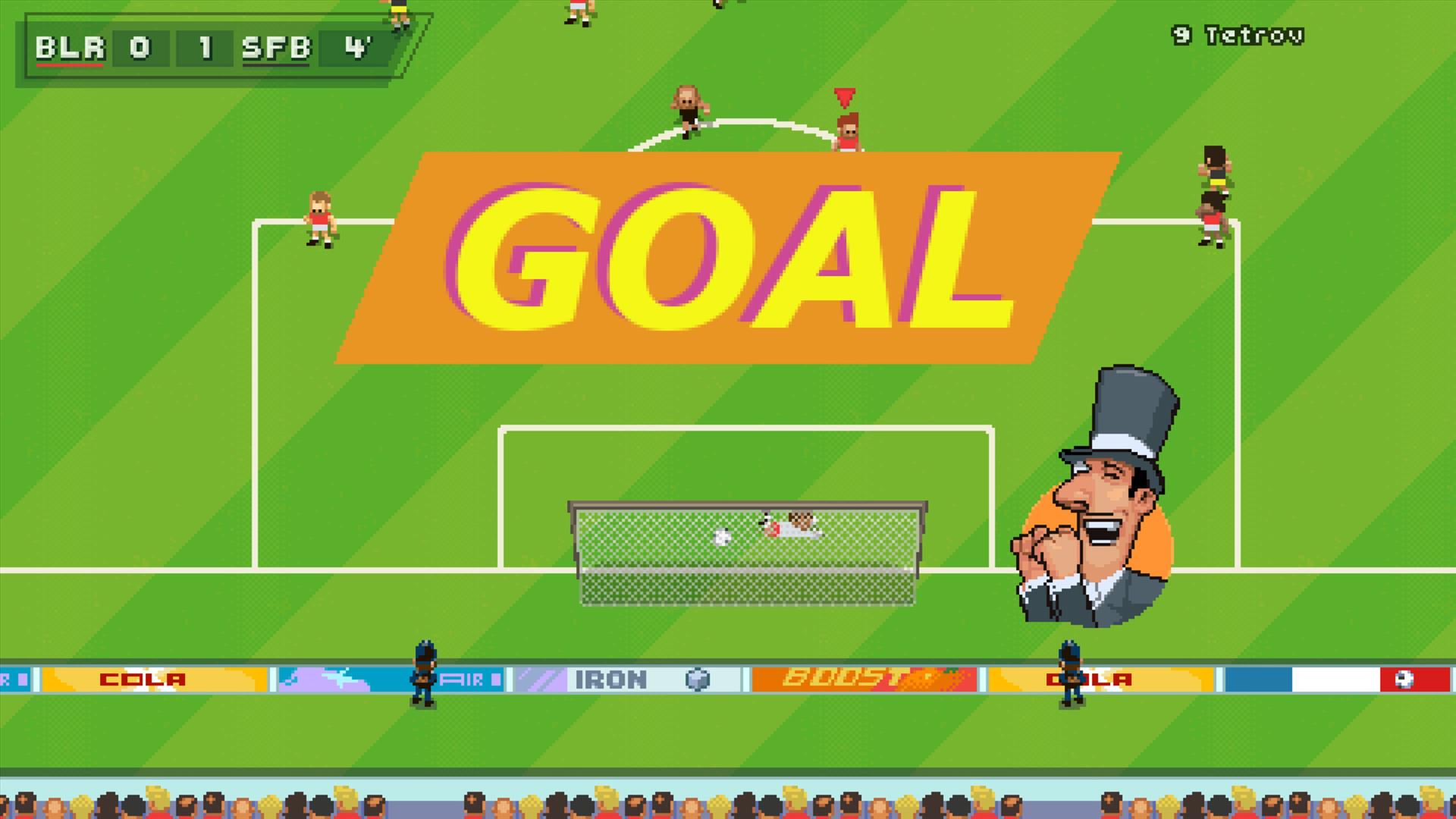 But with the lack of story also comes a complete absence of tutorial. The game does nothing to show you how to play. You are put right into a match and forced to figure it out on your own. Luckily there’s only two buttons for everything: passing, kicking, switching between players.

Learning the controls is quick. You move with a joystick and kick with one button. You don’t do much else besides switch which character you control. Passing the ball works fairly well, as the ball goes where you want it most of the time. While learning the controls didn’t take long, I feel they could have done something, anything, to make the learning process a bit easier.

In the campaign you work your way from the Amateur League through several leagues until you reach the World Cup Tournament. The entire campaign spans a total of 60 matches. Each match plays out as a three minute game, so playing the entire campaign takes less than four hours to complete. In theory the matches should become more difficult the further into the campaign you get, but I did not experience that at all. The game’s AI doesn’t change much at all throughout the course of the campaign. Because of the lack of changes in gameplay and AI difficulty, even that long was a bit too much for my attention span. 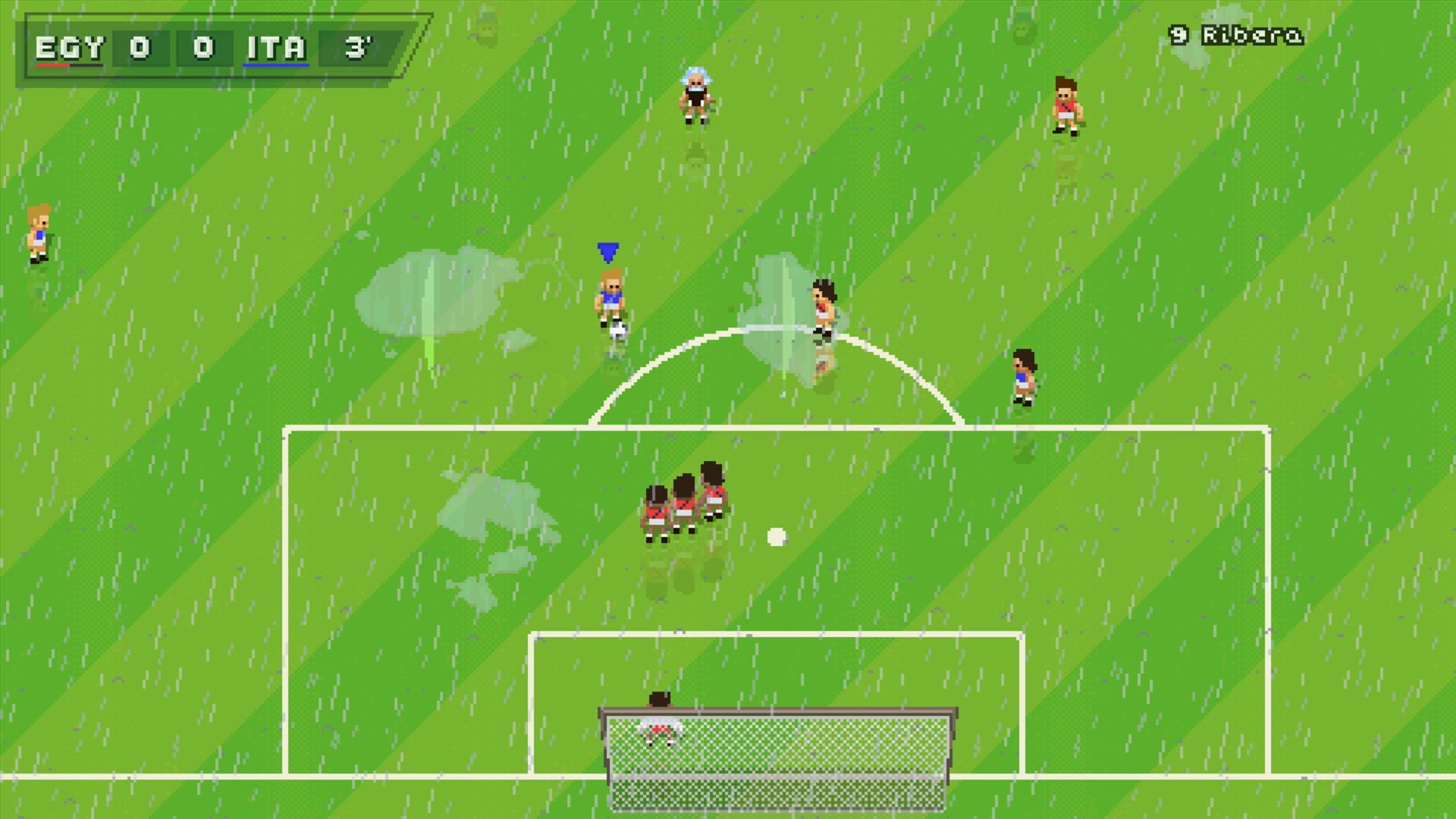 As I just said, the AI in Super Arcade League, is a bit of a disappointment. I assumed in the early matches that I wouldn’t have a problem winning, and that certainly was the case. But as I moved from the Amateur League to the Semi Pro one, and from there to the Pro, and finally the World Cup League, I was hoping the difficulty would grow. But it sadly did not. Even though teams I played against would change the style of game they were playing, become more offensively minded, or defensively, aggressive, how many forwards they would put up—it didn’t really matter. AI teams I played against followed a very similar pattern throughout the campaign and I could easily beat them.

Because the AI leaves something to be desired, matches feel like playing the same game again and again. The small amount of story added in between doesn’t do much. In fact, it would be better off if it didn’t try to add the generic “take the team from the bottom to winning the league in one season” approach that it does. 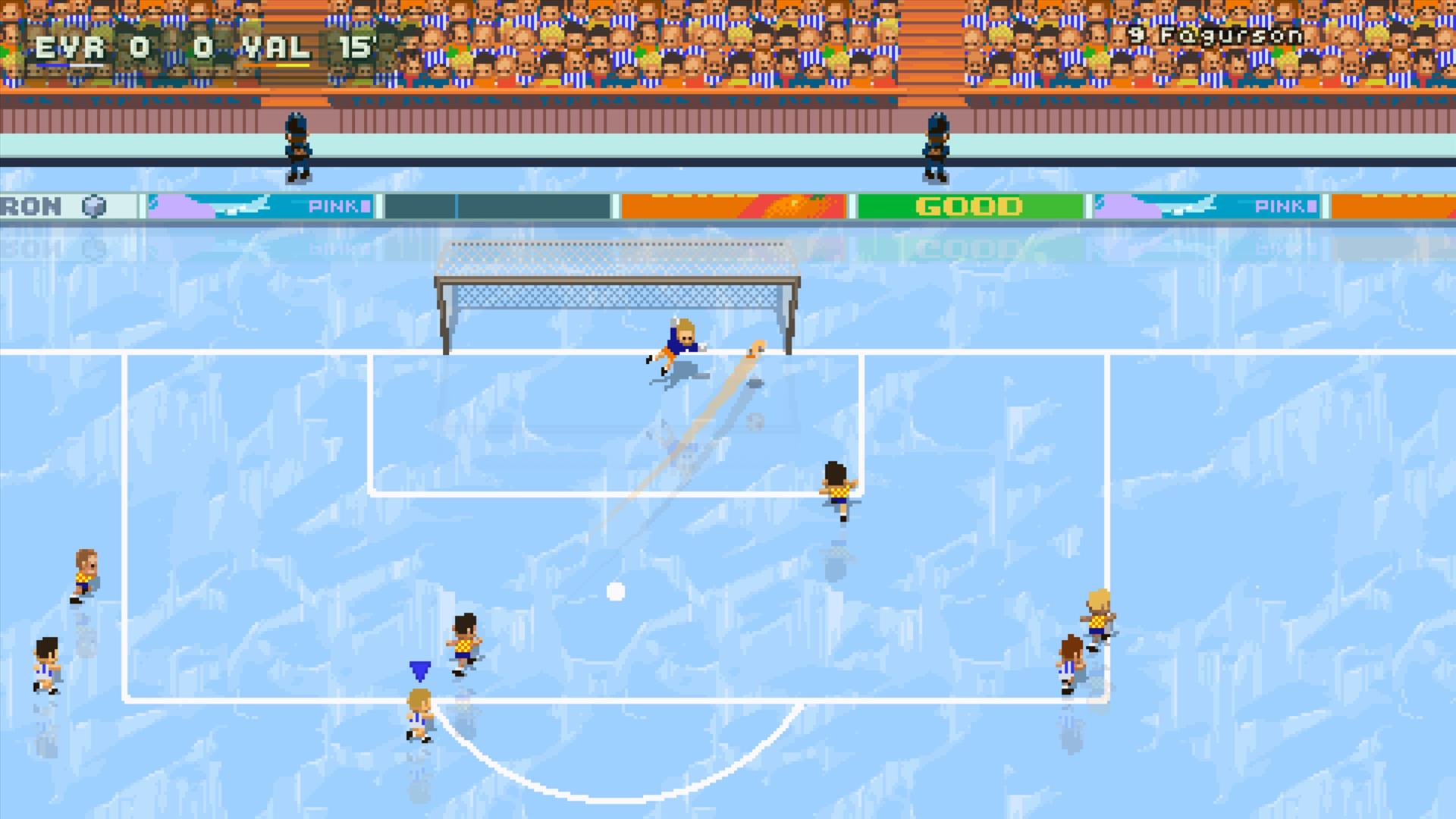 Modifiers to online play are a fun touch without breaking the core mechanics. Adding challenges like random oil slicks, meteors that fall from the sky, or playing the game entirely on an ice pitch, adds a little something after playing the campaign. You can even change the size of the goalposts when playing with friends.

Matches in the campaign are based on a three star system. There's more to matches than just winning. You need to do it in style as well. Adding requirements like scoring so many goals, or making tricky shots adds something to work on while playing matches. The biggest problem with that is that you can usually three star a match just by playing it to win. Even if I wasn’t trying I would usually two star a match, if not get all three the first time I tried. If they made the challenges a little more difficult I would have worked harder to earn them. I have a hard time being motivated to get all the stars when it doesn’t have much to do with continuing the campaign. 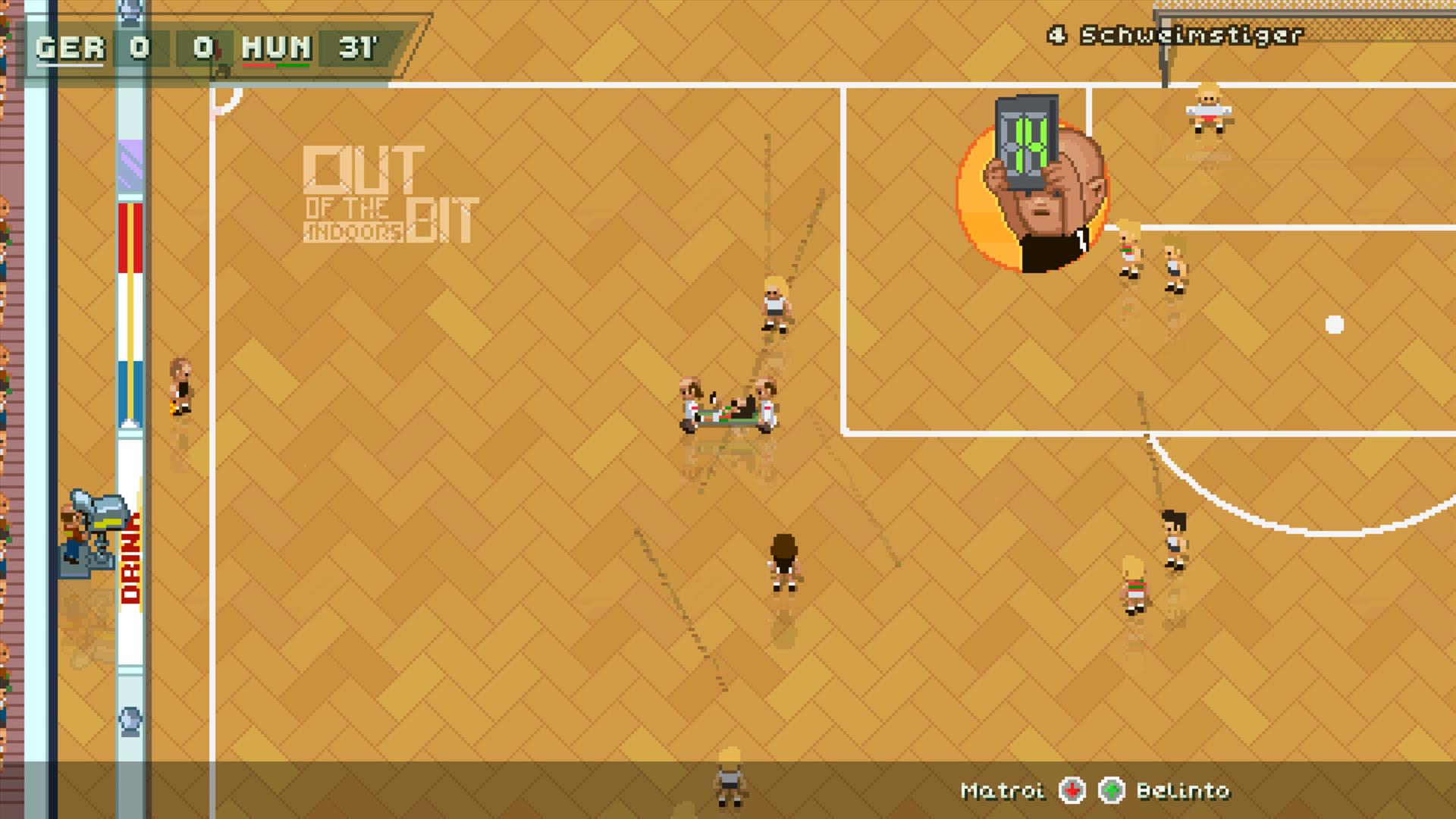 Super Arcade Football is fun by yourself for a while. The simple gameplay makes it easy to pick up and play with a friend as well. I was able to convince a couple of friends to come over and play a few matches with me, and found them to be better at the game than me, even after having played it for a week. Everything's better with friends, usually, and this game is one of those things. We found that three-minute matches just were not long enough. Setting the matches to five minutes apiece made the games a little more high scoring, but also made the gameplay a little more interesting.

My overall time with Super Arcade Football to be pleasant. By not being the biggest video game sports fan I was almost a foot out the door to begin with. The simplistic controls made for an easy opening when trying to find someone to play with. The campaign feels a bit long in the tooth at 60 matches overall. But in a three-minute match it’s easy to pop in and play a few here and there if you’re looking for something that’s not a big commitment. The retro look also harkens back to my Game Boy Advance days, so it was an easy nostalgic trip to take.

While Super Arcade Football puts you into the action instantly, it would have been nice if it would have shown me the ropes before expecting me to win my first match. The retro look and simple controls make picking up and playing with friends who haven't played before easy and welcoming. For a short, fun party game without much on the line, you can't go wrong. But for the single-player experience, while not terrible by any means, it wears out its welcome long before you actually finish it.