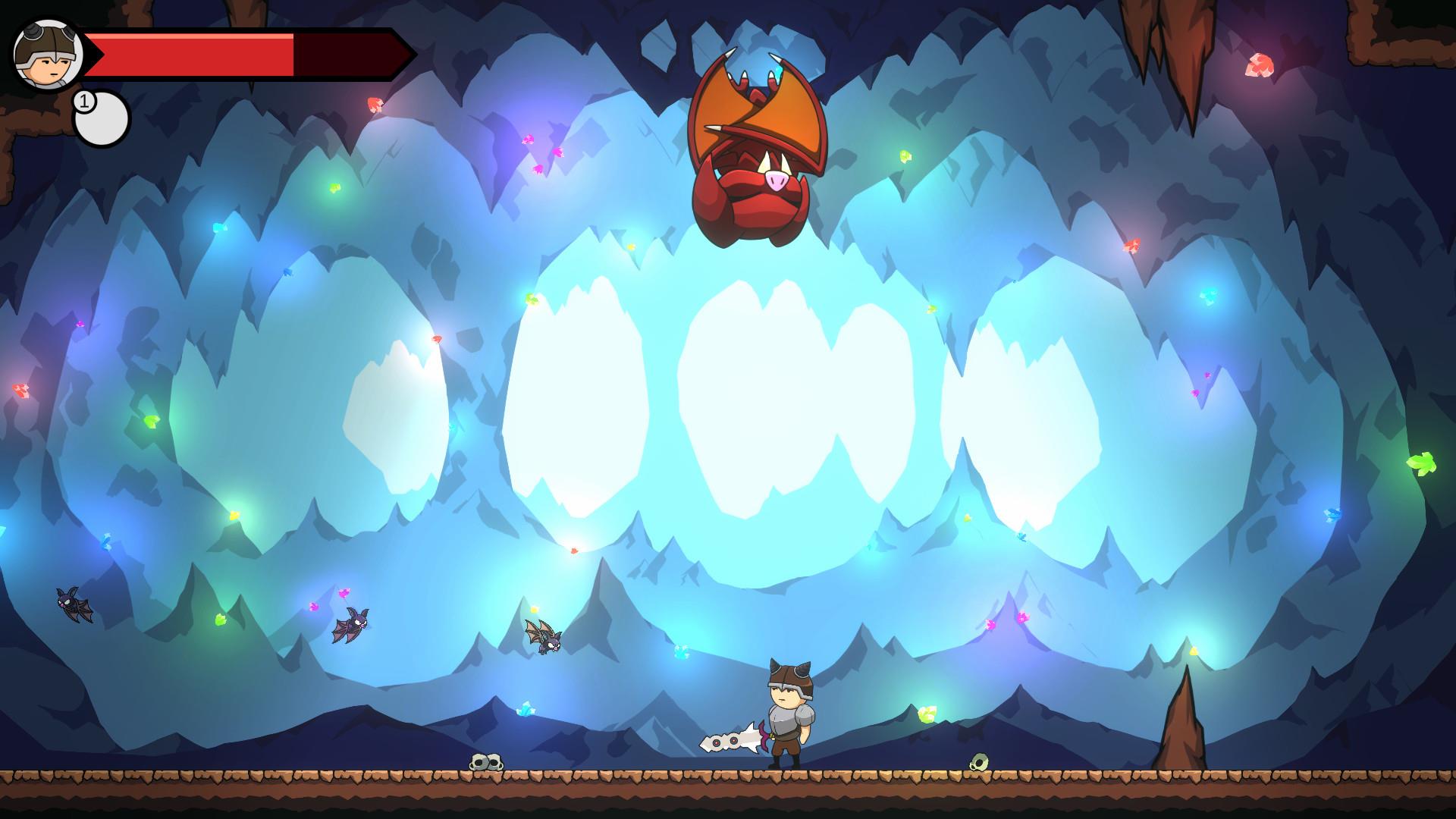 Dungeon Crawlers are pretty simple to understand: go into a dungeon, take out any enemies in your way, collect some nice loot and new weapons, and repeat until you’re so powerful you could do it in your sleep.

A lot of the time you’re equipped with a weapon of some sort such as a sword, but what if that sword wasn’t quite a complete sword? What if you began with a little stubble of a sword and had to find more pieces to make it better? A weird situation to find yourself in but that’s pretty much the main concept behind Broken Blades.

Broken Blades isn’t really big on story. You get dropped into what appears to be a giant cave and you have to find your way out. Seems simple enough, but as I alluded to, your only weapon is a sword that seems rather…short. You don’t really have any range with it, though you can swing it rather quickly. At first this is your only means of attack against the creatures you’ll find in caves which include rats, bats, golems, and more. 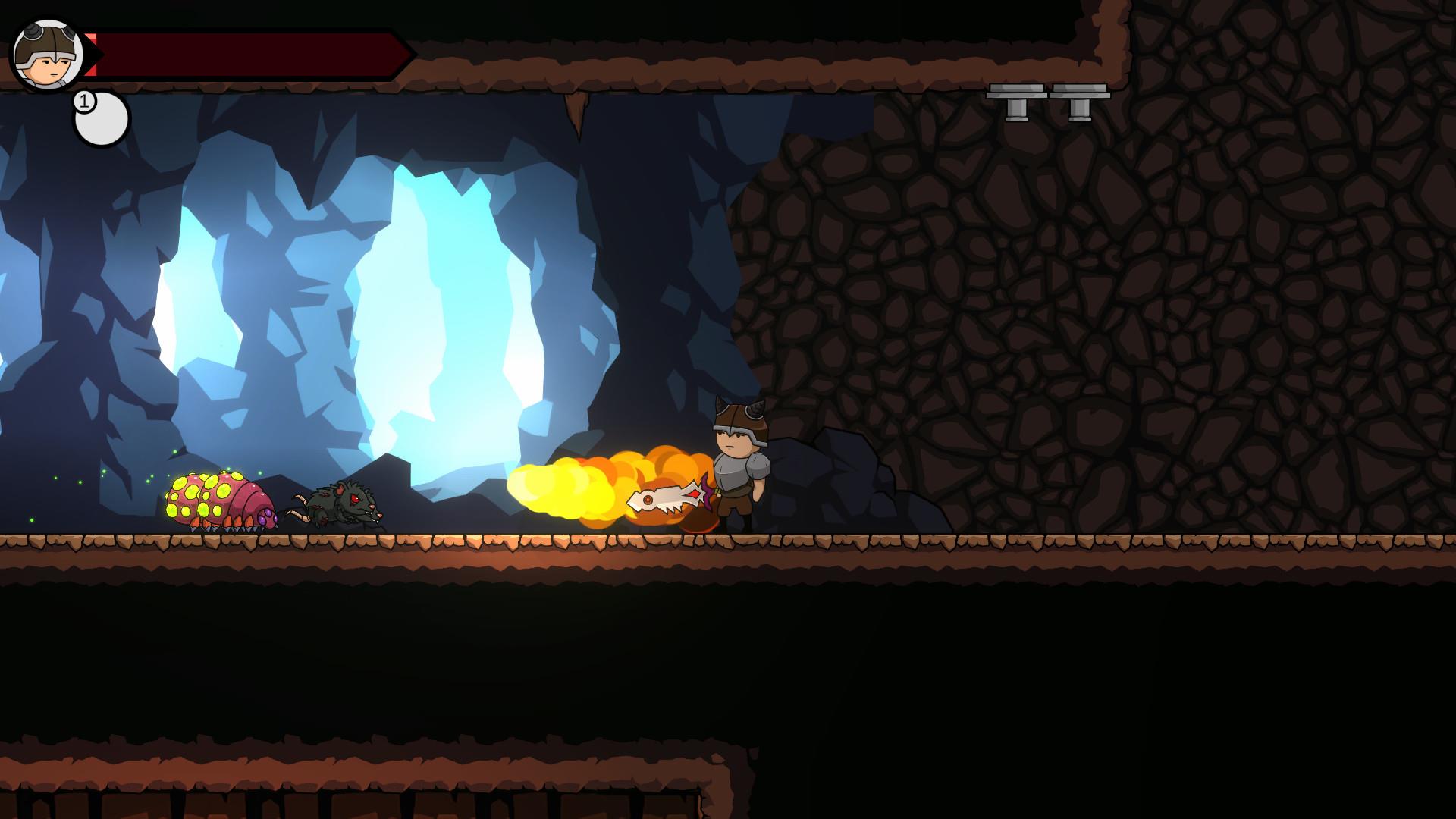 The good news is that you can eventually increase your sword’s length and even give it special abilities. The bad news is you have to find those upgrades either by purchasing them for coins you’ll find or get lucky and have them drop from enemies. The worse news is that it may take you a while because dying will reset a lot of your progress. Thankfully you do have a dodge roll you can use to evade enemies and their attacks both on the ground and in the air.

You’re not completely defenseless, though, as something that can drop from enemies are sword pieces. Your sword can have up to a total of five pieces starting from just a basic piece to pieces that have various effects, such as different types of attacks and damage buffs. These can drop from enemies, though they are rare, and they can be found in the caves as you progress through the game. You can also purchase upgrade types when you find vendors that let you do so. Once an upgrade is unlocked, it’s permanently unlocked and has a chance to appear when you pick up a pieces from enemies or lying around. 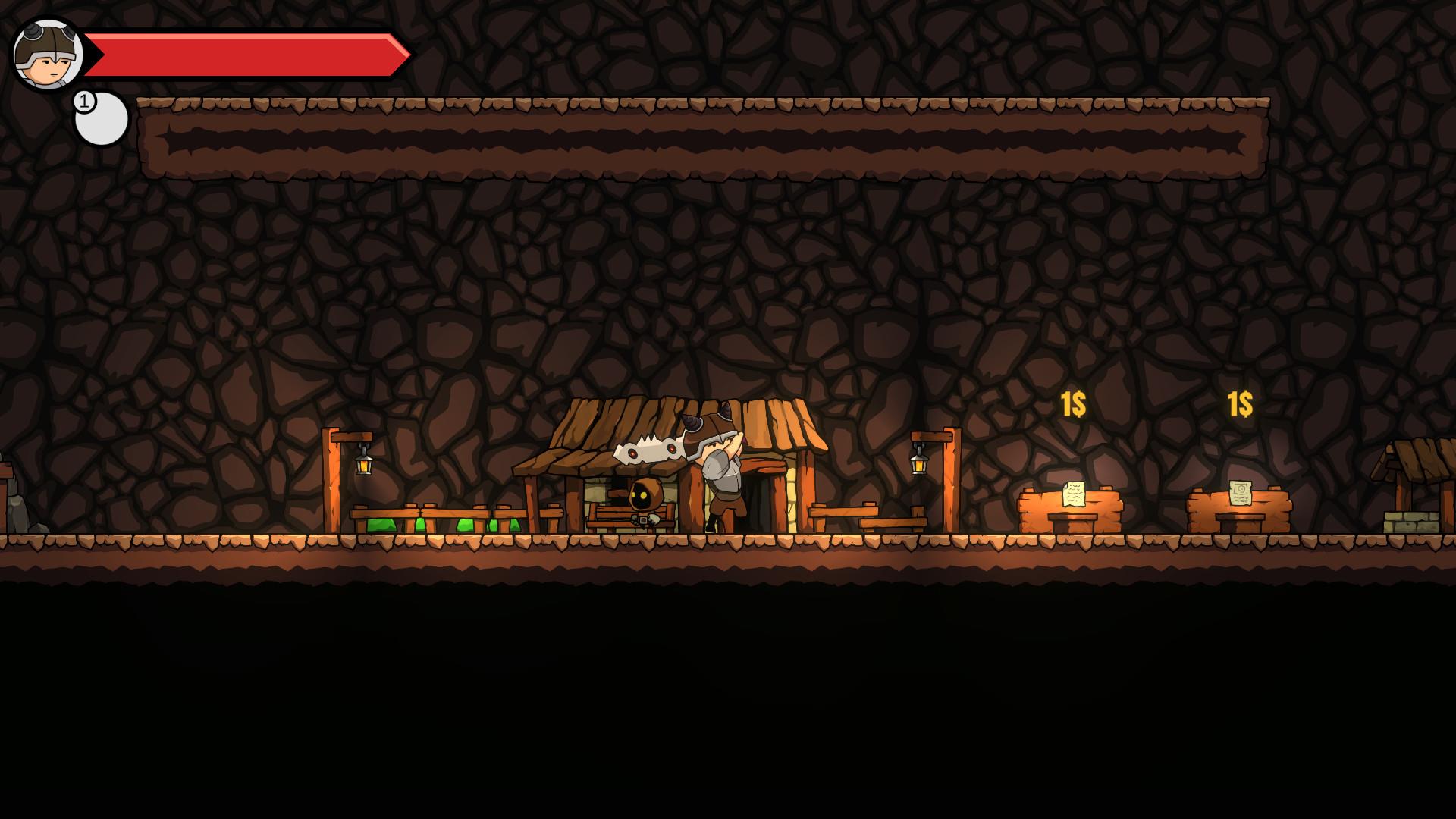 When you pick up a piece you can drop a piece you already have. So, if you happen to have five pieces and you find another, you can drop one piece and replace it with the one you just found. The catch is that when you go to purchase one from a vendor, you have no idea what it does until you purchase it. There is one final catch with the sword. As you assemble more pieces the sword does become more powerful, but also becomes slower to use. You’re basically giving up speed for more power, which can be both a blessing and a bit of a curse—especially against smaller and quicker enemies.

Something else you can find along your journey are scrolls that give you a choice of two (or more) buffs. These scrolls can be purchased from vendors, picked up from enemies that drop them, or occasionally just sitting out in the open. 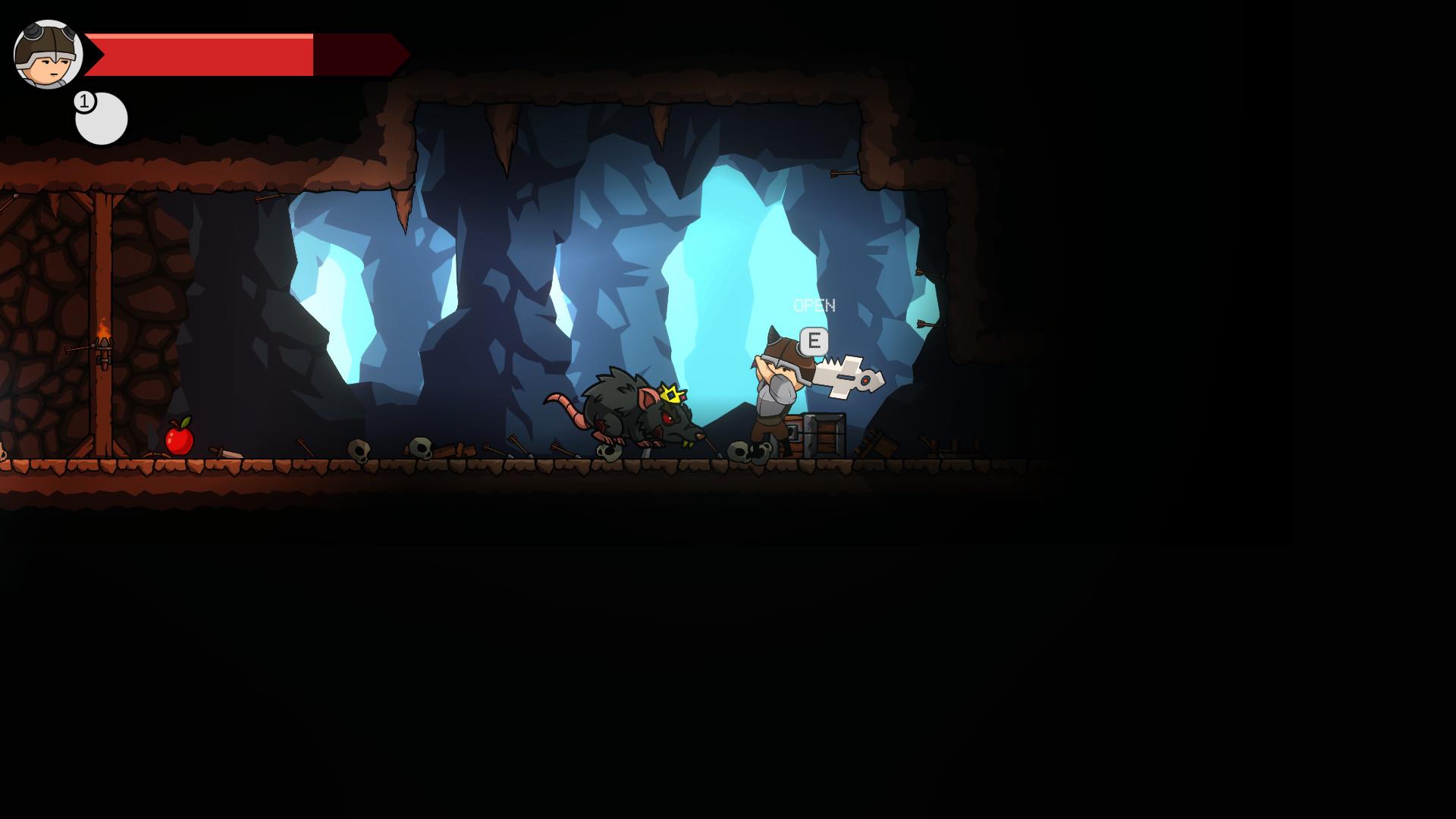 None of the buffs themselves actually say what they do, but thankfully most of them are self-explanatory, such as dealing more damage or taking less damage from certain enemy types, instantly healing you, giving you the ability to auto-heal a bit depending on how low your health is, etc. These buffs can stack, and it’s random which ones you get to choose from when picking up a scroll, including if you buy on. In other words you won’t get to see your choices until you pay up, so it is entirely possible to get the same buff multiple times.

On the surface this all seems pretty good. Start out with a stubby sword, increase its power, gain some buffs, and make your way through the labyrinth of caves. So what’s the catch beyond the one with the sword’s speed? Well, the big one is that this game can be ridiculously difficult when starting out. The game has a bit of a quirk with the enemies and their projectiles. The enemies will only damage you if they’re attacking you. Otherwise you can run right through them (projectiles are always considered to be attacking you naturally). 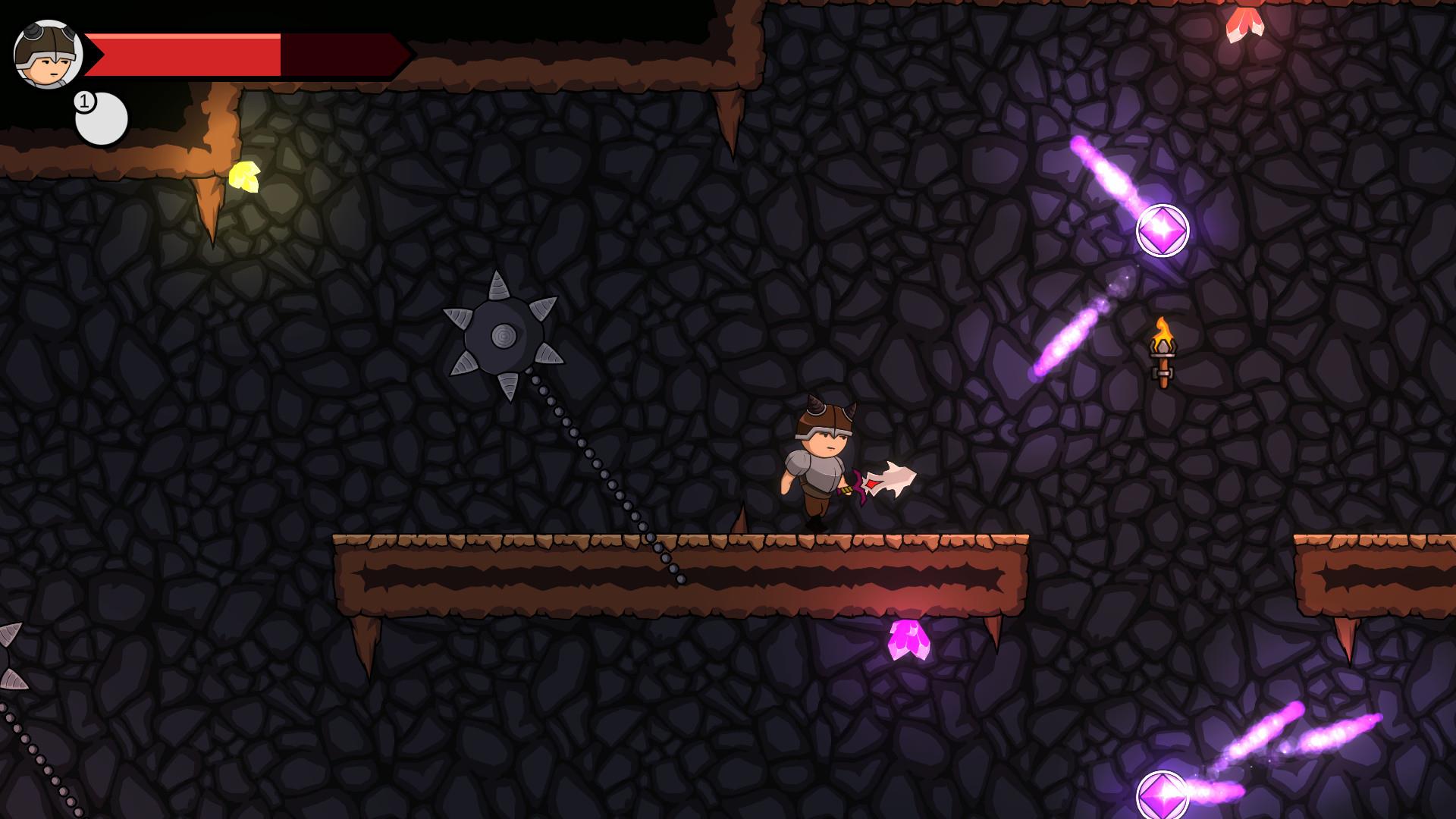 Most enemies will telegraph their attacks because red lines will appear around them right before they do, giving you ample opportunity to roll past them and their projectiles, then get in an attack. Aside from enemies, there are also spike floors and other obstacles that can hurt you, and rather quickly if you don’t pay attention. Then comes the first boss: the King of Bats.

Normally I don’t go into actual boss strategies in my reviews but this is kind of an exception for one reason: I got stuck on this for nearly two hours before I figured out what I was supposed to do. For the record, once you get the opening area down it takes maybe five minutes to get to him, and that’s even with a bit of exploration. Dying resets most of your progress, including any sword upgrades and buffs you may have found. 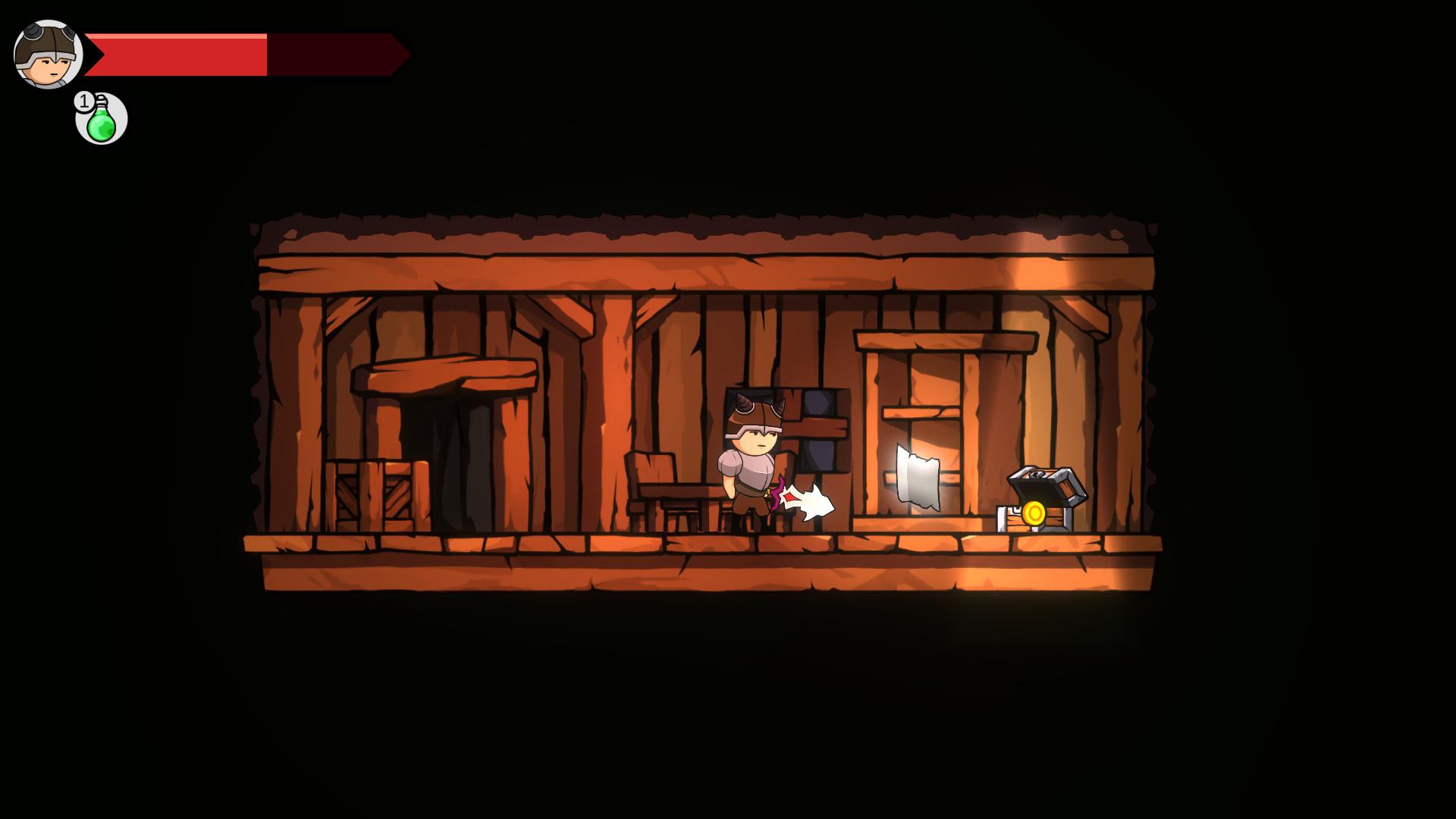 That being said, I spent a good chunk of the early going fighting this bat over and over again, mainly because I could barely get a hit in until I figured out what you’re supposed to do. I never saw the King of Bats give off any alert that he was going to attack and attacking him head-on will only get you damaged quickly. I eventually learned that I had to move towards him and then dodge roll into his sprite to avoid his attack. At that point you can hit his head a couple of times for damage before he’ll fly off and pelt you with projectiles. The worst part about that is that I should have figured that out sooner with how you can roll into enemies to dodge them. But with a giant boss I didn’t think about it.

The game is still rather difficult at times. Enemies can deal a good chunk of damage, especially if you don’t get lucky with the buffs and debuffs you find. Enemy and obstacle layouts are also randomly generated each time you play, so some enemies might not be where they were last time—meaning, you have to be on your toes with how you approach each playthrough 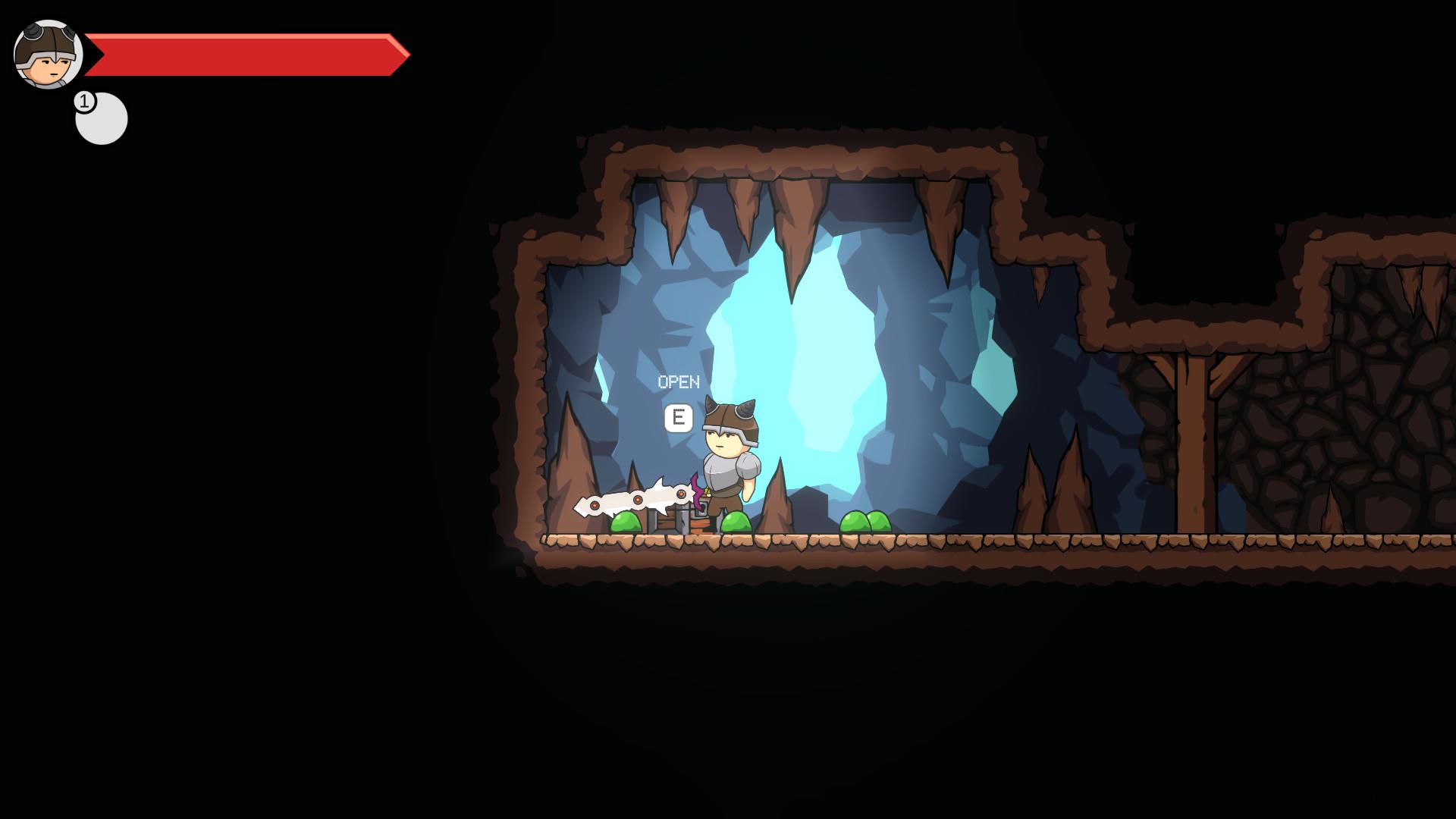 Thankfully, as you defeat the bosses and progress, you’ll get permanent upgrades. One of which allows you to go into side caves to find more items and upgrades to help you out. These permanent upgrades stay with you even if you die. So, if you beat the King of Bats, then find the path that’s now open to get the “go into caves” upgrade, you’ll keep that upgrade even when you die even though the King of Bats respawns.

Overall Broken Blades isn’t bad, though it can be incredibly difficult starting out until you fully understand what all you can do. I started to liken it to games such as Vertical Drop Heroes where you make progress, die, and your level progression restarts, but you keep any upgrades and such that you find. 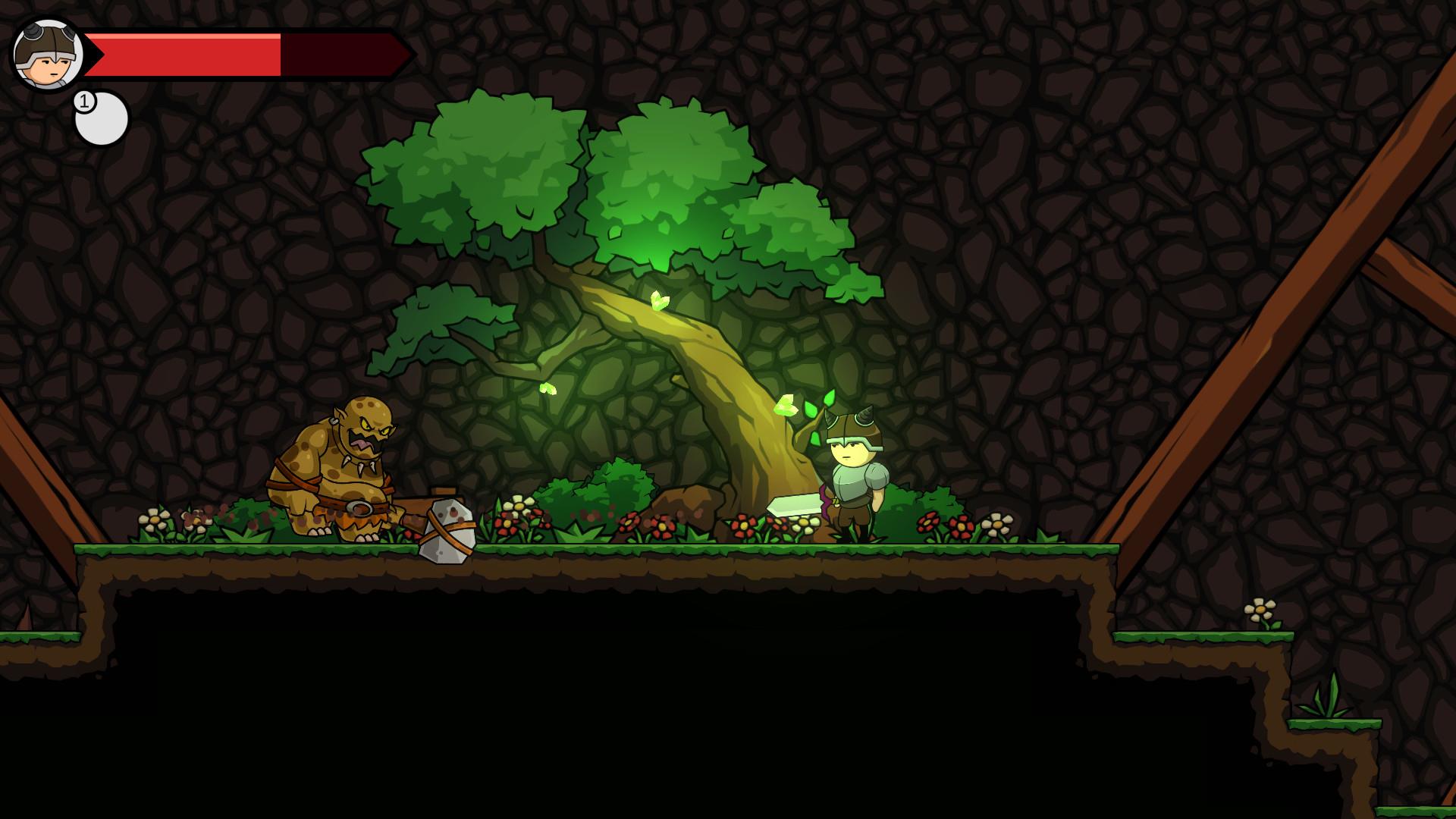 This seemed like that starting out, but you seem to retain very little when you die. Instead of retaining any items you find, you basically retain any major items you find, but everything else resets. I’m not going to lie: this frustrated me a lot when I first played it and, as much as I enjoy dungeon crawlers, this is hard to recommend to someone who’s never played one before. In fact when I got stuck at the King of Bats, the only video I found online of someone beating him was after he had already unlocked more upgrades and fought him on a much later attempt, which doesn’t really help someone who’s fighting him with hardly any upgrades, let alone sword upgrades that grant projectiles.

If you like dungeon crawlers and want a challenge, Broken Blades won’t set you back much at only two dollars. However, even though it’s just two dollars, just be prepared for a rough time at first.

Broken Blades frustrated me in the early goings but did get better as the game went on. However, the biggest barrier for people newer to dungeon crawlers is that the game can be overly difficult, especially since you lose most of your progress upon death, only maintaining major upgrades. Dungeon crawling veterans looking for a challenge might want to give Broken Blades a shot, but even for only two dollars the game can be very difficult and frustrating for newcomers.