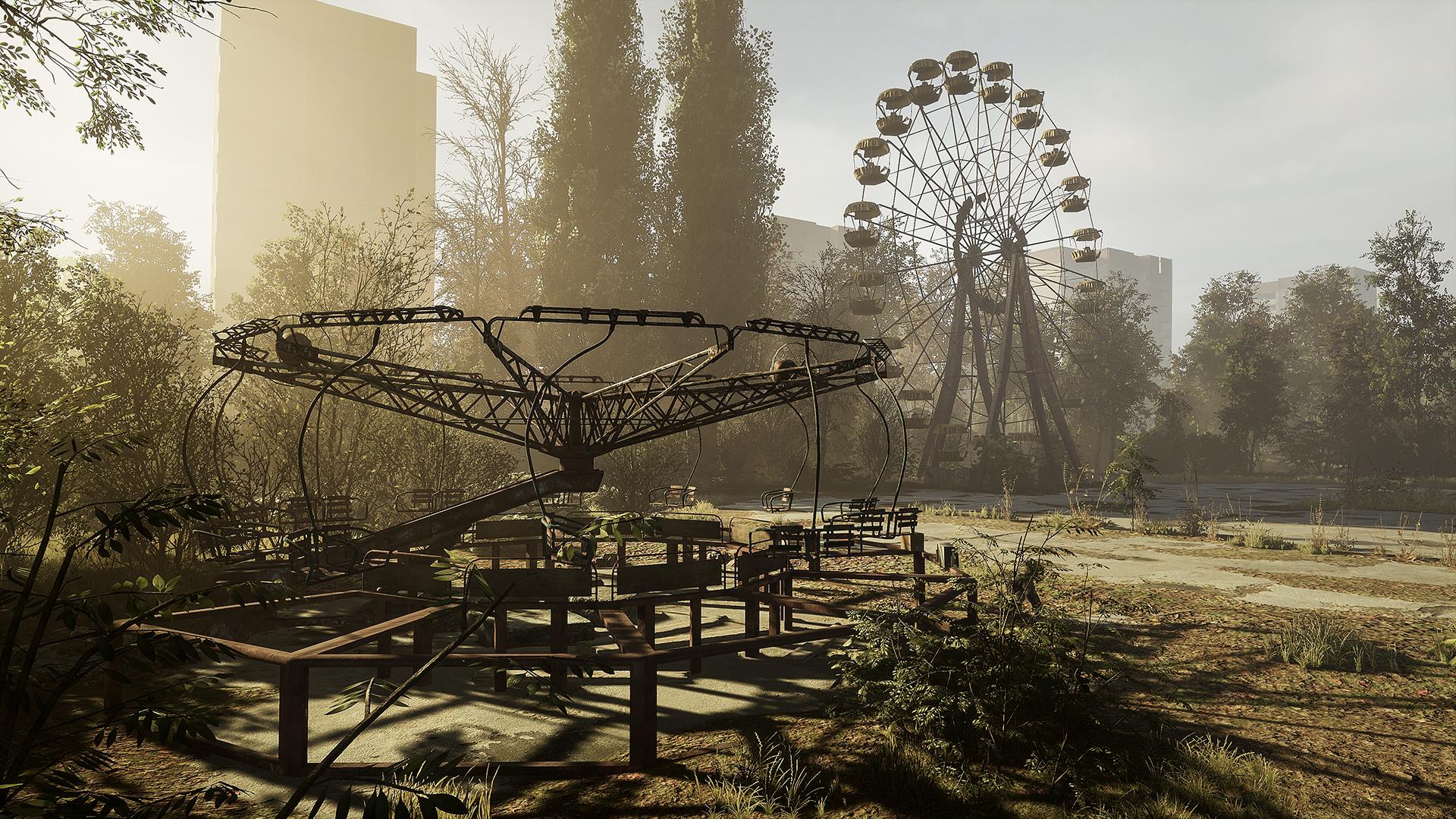 The Chernobyl accident took place near Pripyat, Ukraine, in April of 1986. The accident has been well documented at this point, with books, documentaries and a stellar HBO series chronicling the disaster down to the minute. People are aware of this history, and the eerie area around the Chernobyl plant has taken on an almost mythical status these days, with a strange mixture of ghoulish tourism and horror film production springing up in the blighted area. 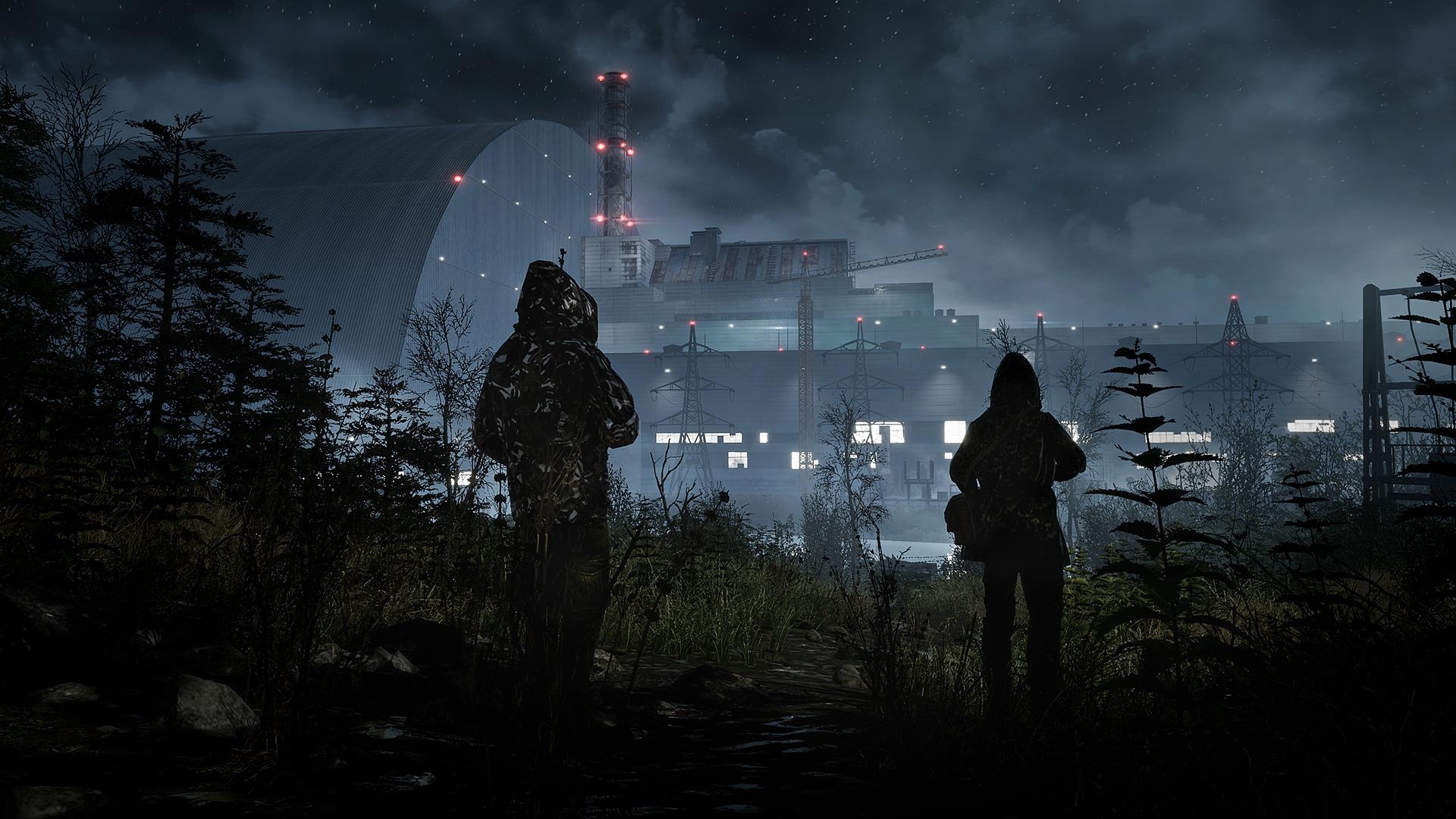 I was in Russia in 1993 when the lesser-known—but still catastrophic—Tomsk-7 accident took place, and I have vivid memories of waiting anxiously by the phone for final word whether my fellow students and I would be evacuated. As a result, I’ve always been a extra fascinated by Chernobyl and other nuclear accidents. I was delighted when I learned that The Farm 51—the same development house behind 2016’s Chernobyl VR Project—were creating a fiction game set in Chernobyl’s Exclusion Zone, and they were using a digitally scanned version of the plant and the surrounding area as the setting for the game.

As it turns out, if the representation of Chernobyl and Pripyat in Chernobylite are truly accurate, then the Fallout series has been doing one hell of a job visually representing a post-human disaster area for all these years. At certain points, squinting at Chernobylite would leave a player thinking they were playing a Fallout game, though the base-building mechanics in Chernobylite are far better than the sloppy mess found in Fallout 4. 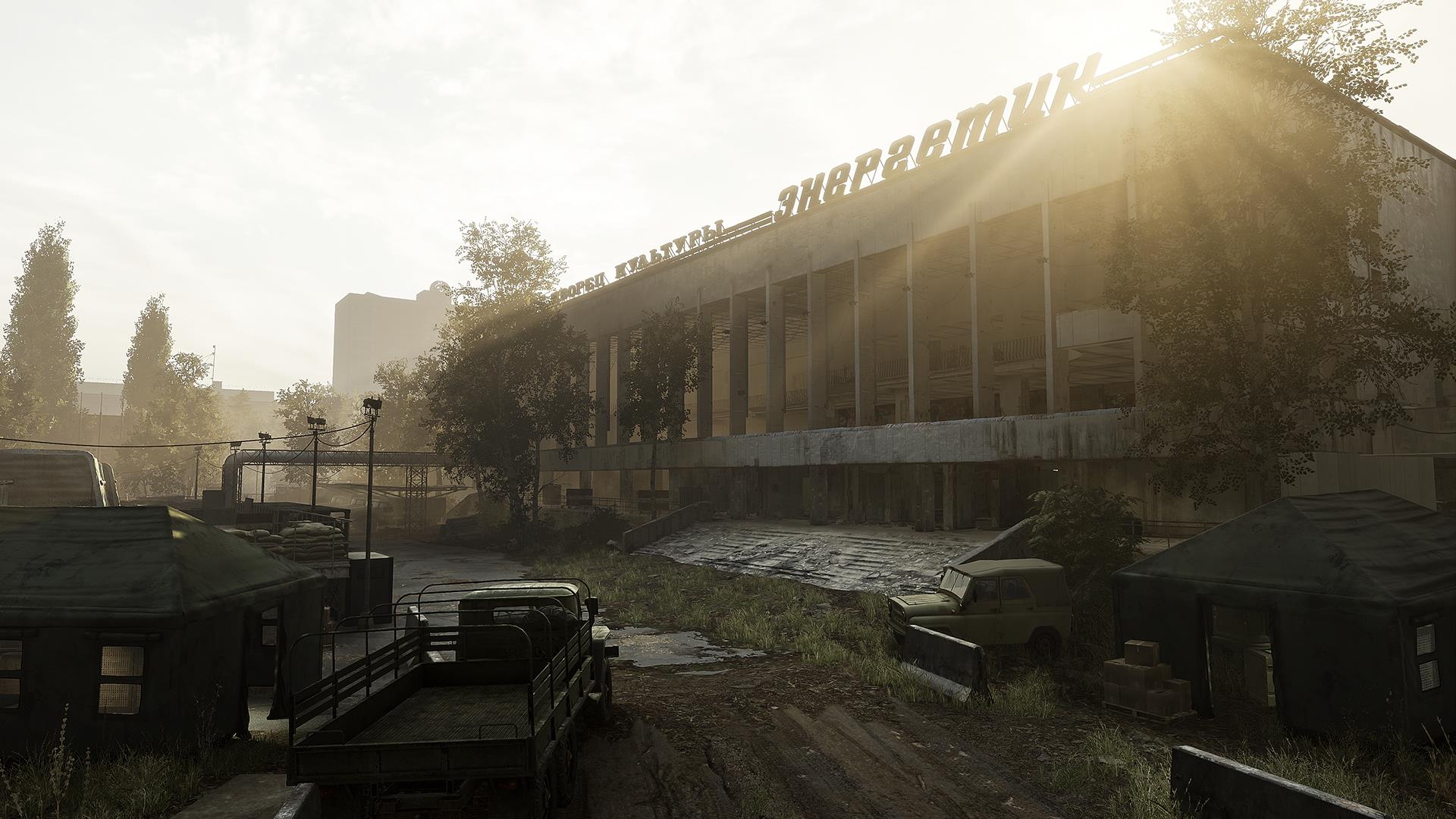 Indeed, though things appear similar on the surface, with the first-person vantage point and weird monsters, the gameplay of Chernobylite is actually pretty far removed from what you typically find in Bethesda’s wastelands. This is not an open world game, though there are some rather large areas to explore. Instead, Chernobylite is a mission-based survival game, with a fairly structured story tying it all together.

The player takes on the role of Igor, a scientist present at Chernobyl before the accident. He is returning in current day to attempt to resolve the mystery of what happened to his fiancée, though your guess is as good as mine as to why he waited so long. Taking up residence in a local warehouse, Igor and his slowly growing staff of military and miscreants set out every day on missions into the Exclusion Zone to salvage for parts, resolve conflicts, and most importantly, look for clues to solve the 35-year-old mystery. 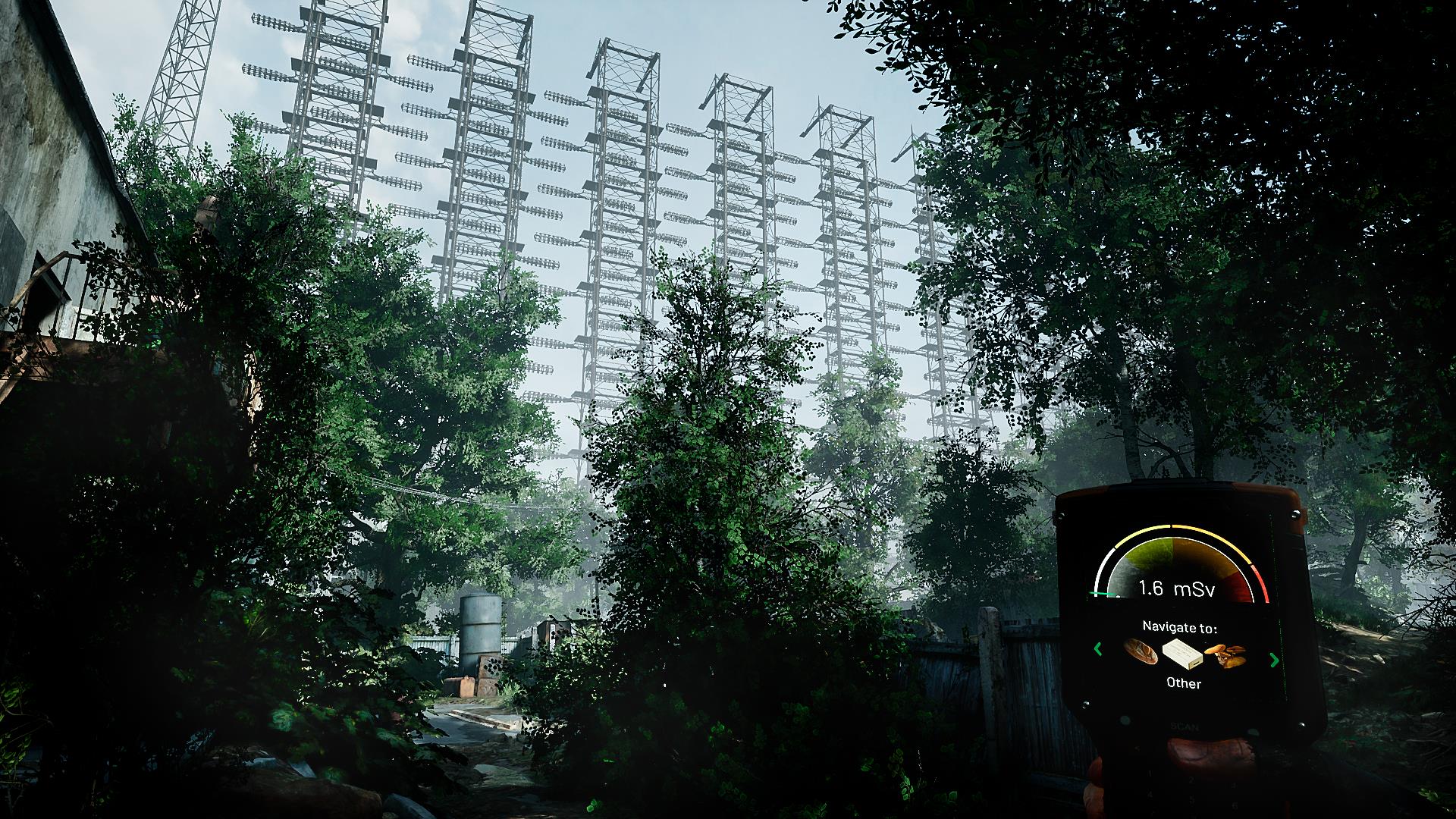 Igor has made a number of technological advancements in the last three decades, including inventing a way to open wormholes in space, crossing through a freaky in-between (upside down?) world when traversing between points. Strange stuff starts going down almost immediately, both in the real world and in this interdimensional space, which challenges the player to uncover how all of this freaky supernatural weirdness is tied together.

The mission-based structure of Chernobylite surprised me, as I was expecting an open world exploration-style game. Instead, players go through a daily routine in Chernobylite. Wake up, take a look at what you can build in your warehouse to help with the mission (or make your team more comfortable), assign missions to each of your followers to go gather food or supplies, accept a mission yourself, go forage around the Exclusion Zone, complete your mission (or fail), come back home, go to bed. 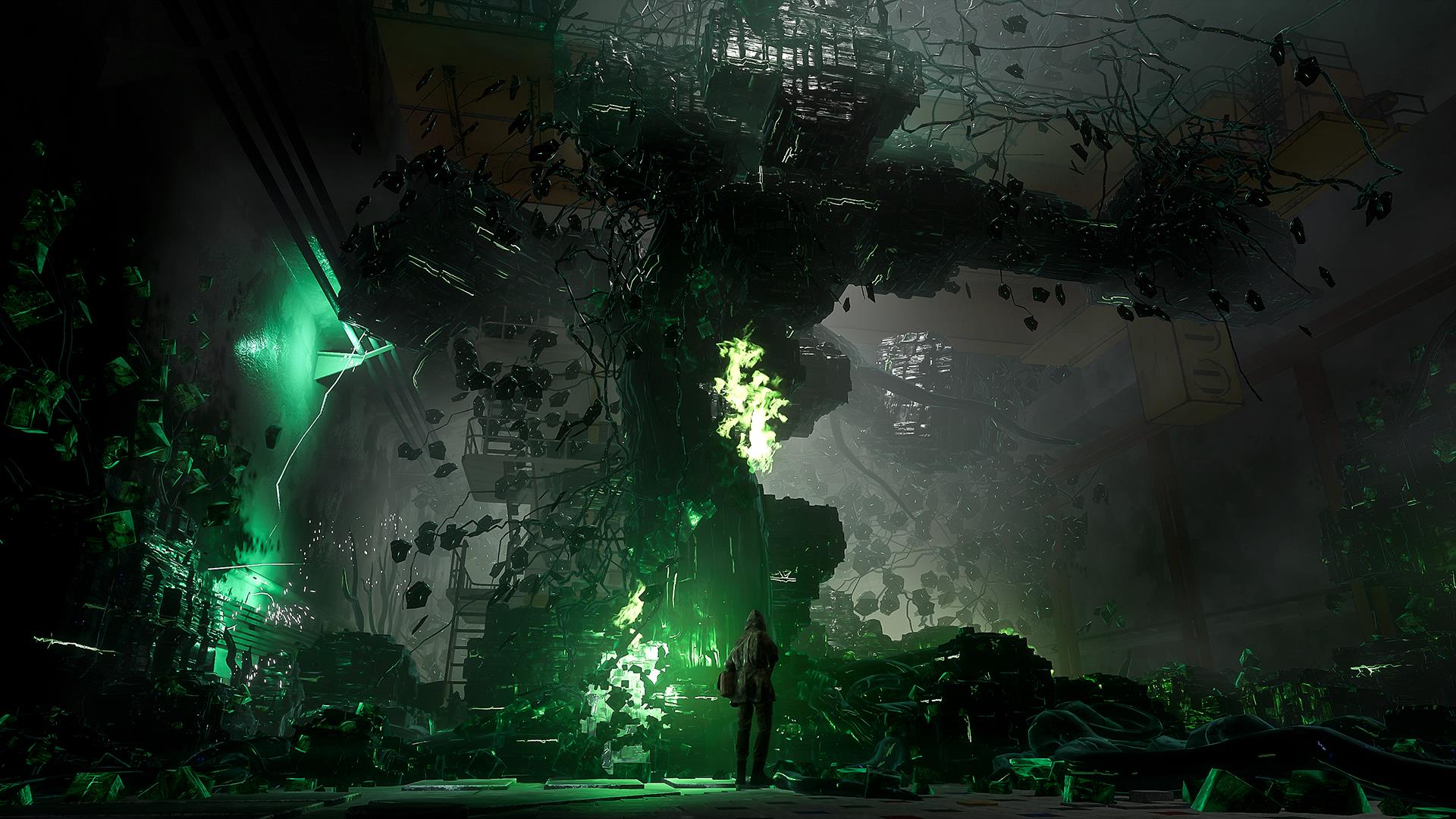 I settled into this routine fairly well once I understood it, and began enjoying the management aspects of Chernobylite quite a bit. You have to keep everybody on your team fed and healthy or they start freaking out, which means a lot of careful planning and resource management. Sure, you want supplies to build that air purifier, but your dudes gotta eat, so maybe it’s smarter to send them after food drops than machine parts. The missions themselves are the meat of the game, but I found keeping tabs on my team and building up my warehouse to be a pretty tasty side dish.

You can build all sorts of stuff in your warehouse with the junk you find laying around while on missions – which motivates players to take their time scavenging while out in the world, rather than simply making a beeline to the objective. You can create energy sources, radiation showers, televisions, all sorts of stuff, and it’s just as simple as picking a spot and plopping the thing into place. I got a kick out of rearranging the stuff in my warehouse into functional areas; the living quarters is over here, the crafting benches are all lined up on the far wall, the chugging generators and air processors are tucked away in a corner where no one goes. It was surprisingly engaging to dork around with the layout, like a dire, radioactive version of The Sims. 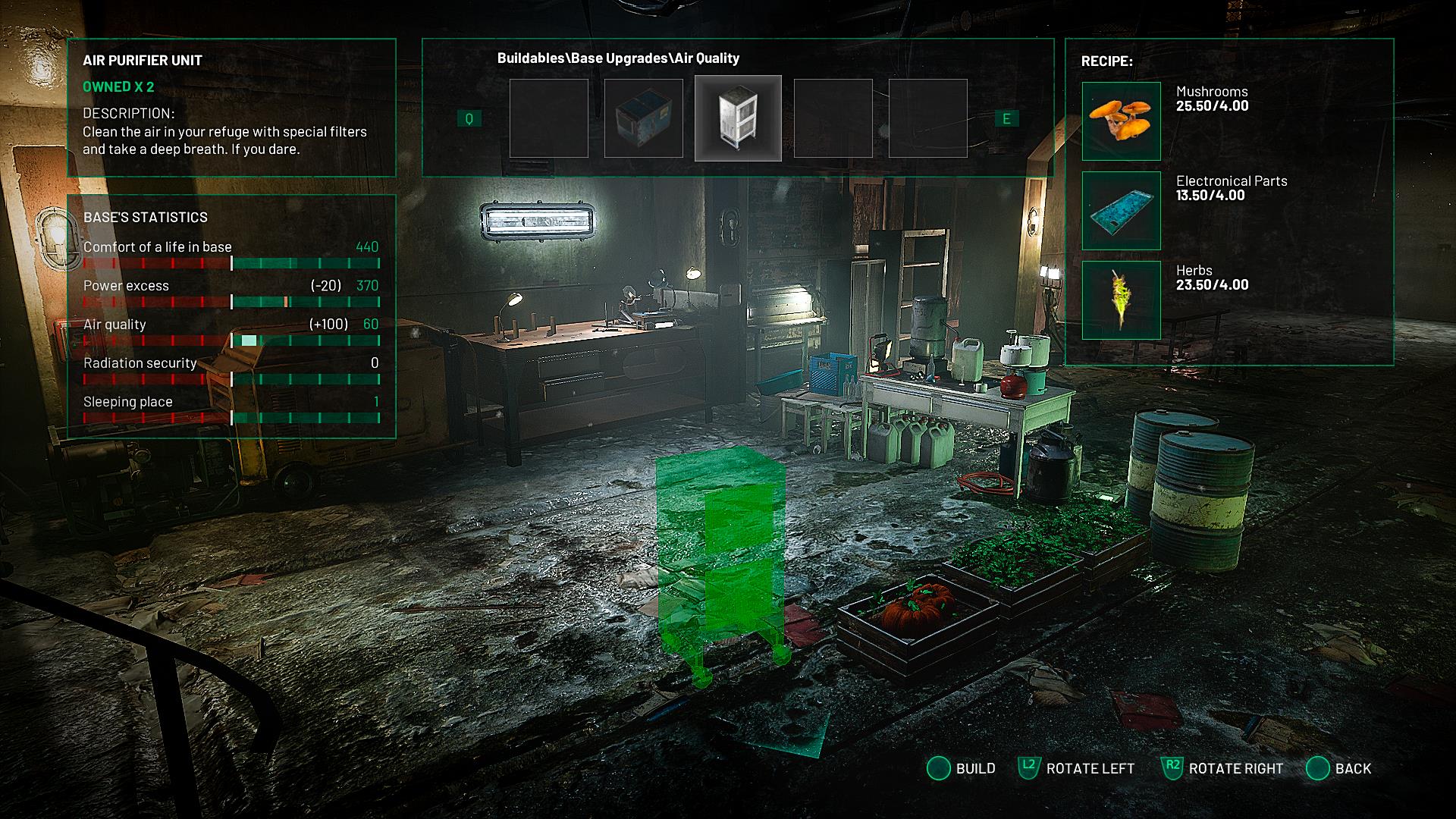 Missions take place on a series of maps that players will become pretty familiar with, as there are five or six primary areas that will be revisited frequently. Many material-gathering missions are timed, and you only have a couple of days to see to them before they cycle out of the queue, but story missions just kinda hang out on the list until you get to them. Indeed, if you fail a story mission, the game gives you another chance to go in and give it a shot.

Mission maps are dotted with areas of interest in addition to the primary objective, and it is wise to poke around the map, as some of Chernobylite’s creepiest moments can be found at these optional waypoints. Players are free to attack missions however they like. When you come across guards, you can silently take them down, engage them in an open firefight, or just crawl right past them. 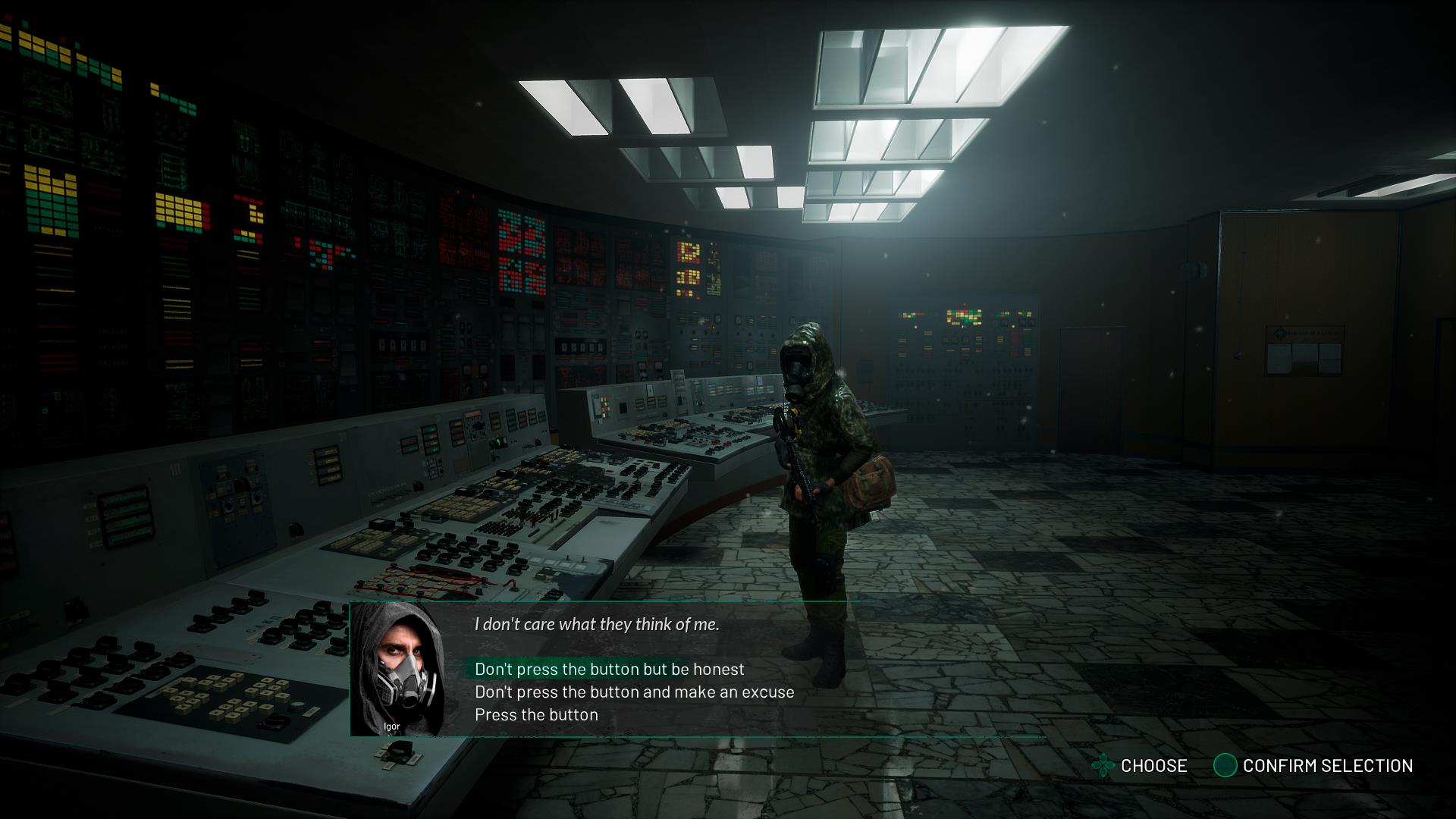 I tended to go the stealth route, as doing murders takes its toll on Igor’s sanity, which must be maintained just as carefully as his health meter. In Chernobylite, it’s best to only kill when you absolutely have to. When I did have to engage in combat, I almost always silently took enemies down, as I frequently had some trouble getting the game’s guns to fire correctly. I would jam on the trigger, but nothing would happen. Far better just to go all stabby-stabby on the guys you need to clear out of the way.

Chernobylite contains a number of critical decision points—moments when the player is asked to determine a path forward between two options, neither of which neatly fits into the “good” or “bad” categories. Interestingly, the player doesn’t need to stick with what they initially decide. Due to Chernobylite’s more science fiction timey-wimey aspects, players can go back and reverse previous decisions, then return to the present and deal with the repercussions of the changes. It’s a cool mechanic, and, to my knowledge, entirely original to this game. 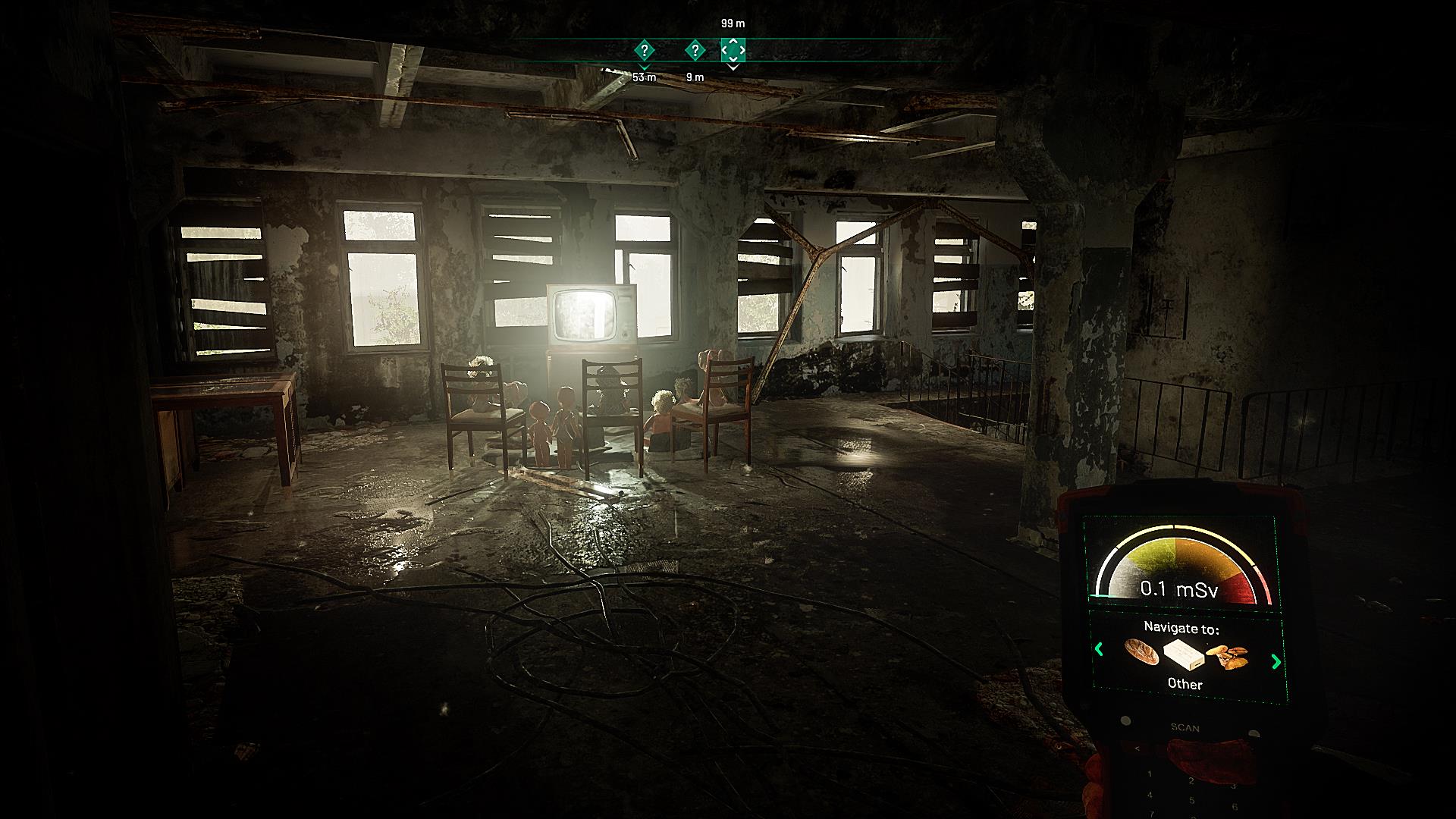 Chernobylite is a remarkably full-featured and solid game for an indie. While it doesn’t quite feel AAA in its execution, it comes pretty close at times. With a ton of interesting mechanics, a surprisingly solid structure, and an intriguing story and setting, Chernobylite gives RPG fans a fascinating look into an alternate universe version of a real-world disaster zone. While I’m certain there aren’t quite this many creepy dolls laying around the real Pripyat, I’m willing to suspend my disbelief to get such a detailed view of the Chernobyl plant’s control room. It’s a bonus that that view comes embedded in an interesting and unique game.

While ostensibly a first-person RPG, Chernobylite surprises with its fun base-building and personnel management mechanics. Creepy, weird, and unique, Chernobylite offers a great story and interesting combat scenarios—even if the gunplay is a bit glitchy. An unconventionally unique game in a very cool setting, Chernobylite is recommended for those looking for something a bit different.