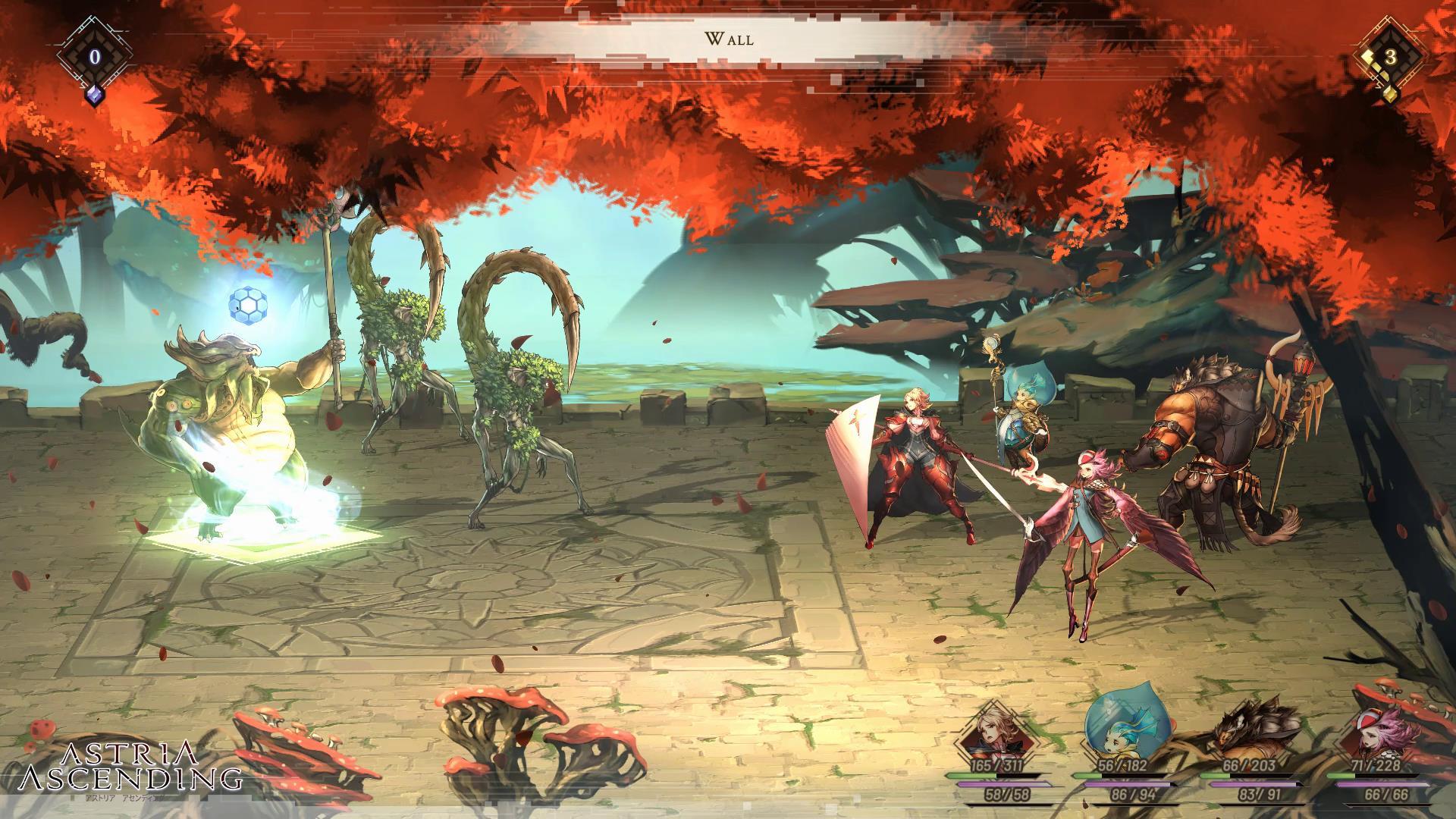 Astria Ascending, the new JRPG releasing this week from Artisan Studios and publisher Dear Villagers, is an unbelievably beautiful game. With a unique, hand-drawn art style, Astria sold me rather quickly on its side-scrolling take on JRPG exploration. The characters in the game are unique and interesting, and though you start the game with a veritable gang of eight Demigods already in place, the game makes quick work of making them all feel like individuals.

Indeed, the world building in Astria Ascending is so strong that I would love to read fiction (or, you know, play more games) set in this fascinating universe. At the beginning of the game, the player takes control of the Demigods, a group of regular citizens from all over the world that have been elevated in status and power to become their society’s trusted leaders and protectors. Demigods are chosen seemingly randomly, plucked out of ordinary life and imbued with special abilities. The downside? Once you become a Demigod, you only live three years. 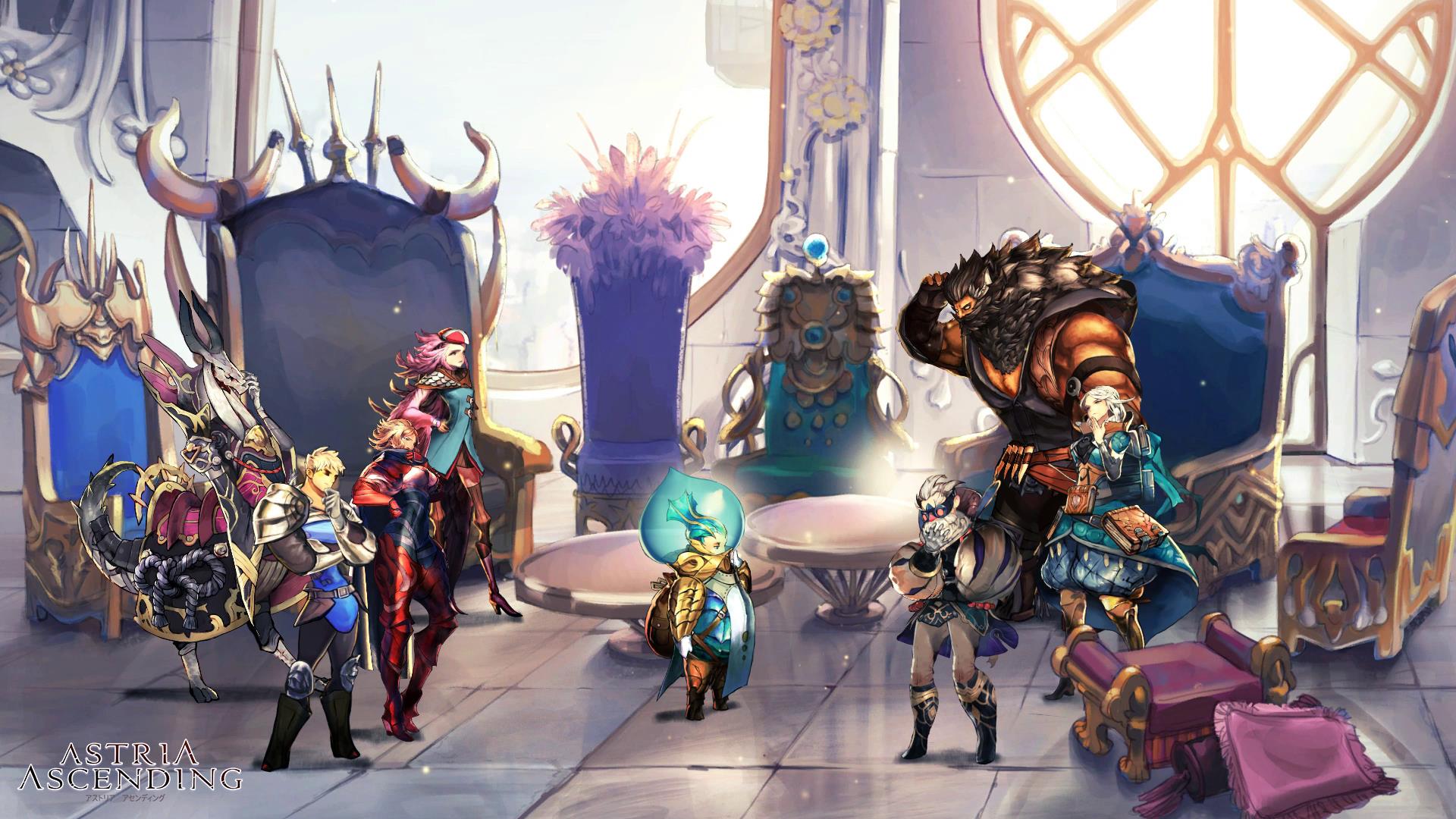 At the beginning of Astria Ascending, your team of demigods is almost done with its term of service – only three months remain before the team is retired to make room for the next group of demigods. This, of course, means that they all will die simultaneously. Everyone seems to take this as a matter of course. Astria Ascending implies that no one wants to be chosen as a demigod, as it is both a glorious honor and a death sentence. But this team seems to be resigned to the fact that they will soon be retired; indeed, some of the members seem to look forward to it.

Obviously, the team behind Astria Ascending has completely broken free from the tired “princess with amnesia” tropes that have plagued the genre for 30+ years. Astria Ascending drops you into its interesting and unique world without much explanation, allowing the player to slowly glean the details through context. The world building is all rather stellar in execution. 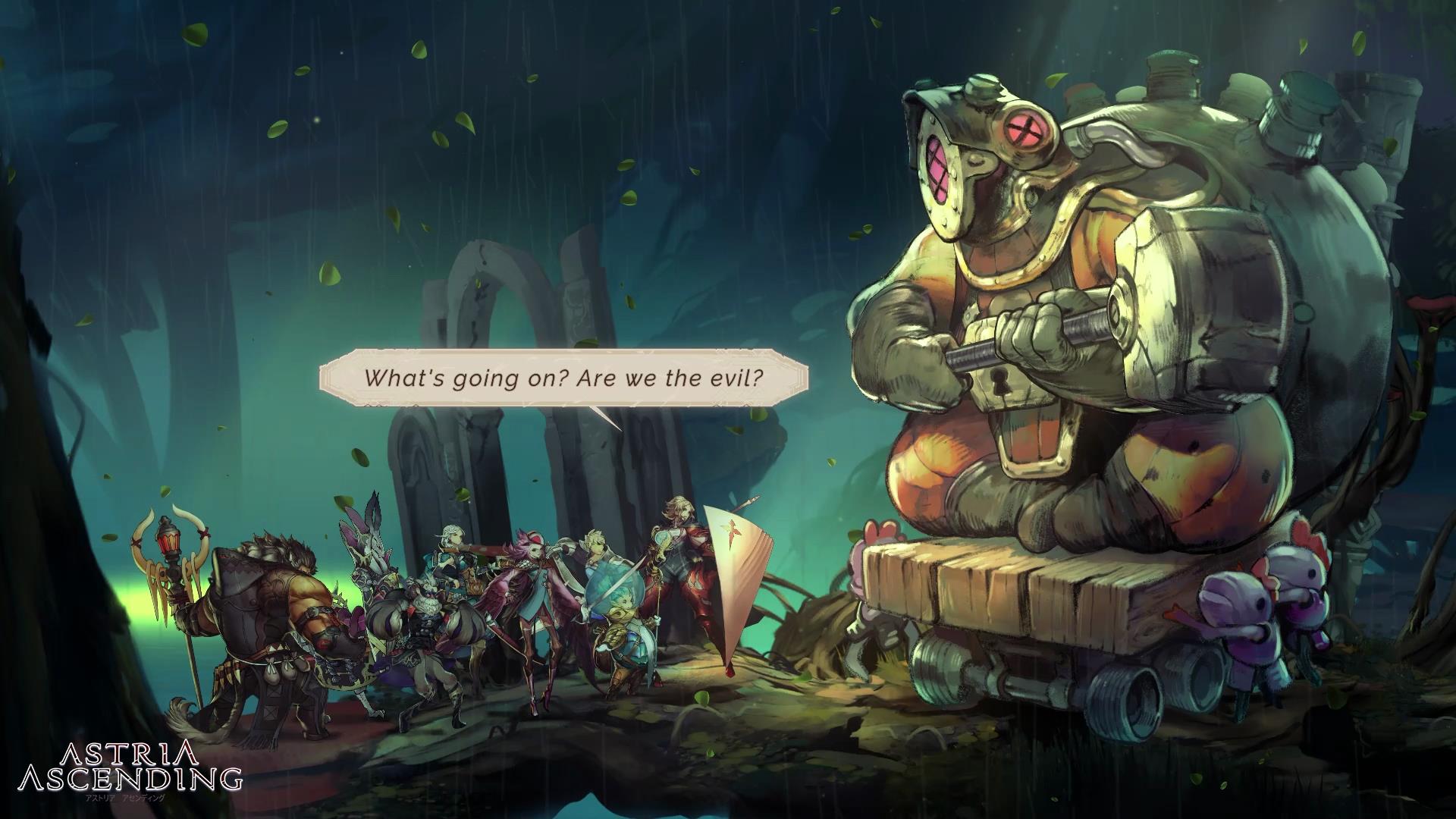 It is against this backdrop that Astria Ascending’s story takes place. I want to specifically avoid spoilers, but I will say that “noises” (this world’s term for roving monsters) begin attacking various districts in the demigod’s home city. Each district is home to a unique race of people, all of whom peacefully co-exist, despite some rather glaring differences. These attacks, which could be coordinated, threaten to disrupt the long-standing peace. There is a mystery to be solved, and the team of demigods needs to get to work quickly, because the situation is dire and the clock is ticking.

Astria Ascending has all of the pieces in place to be a fun, engaging RPG. But in practice, something about the way those pieces are put together felt a little off to me, like going on a long walk with a pebble rolling around in your shoe. Sure, the scenery is beautiful, and the weather is pleasant, and the conversation is engaging, and you would really enjoy it if…not…for…that…dang...rock. 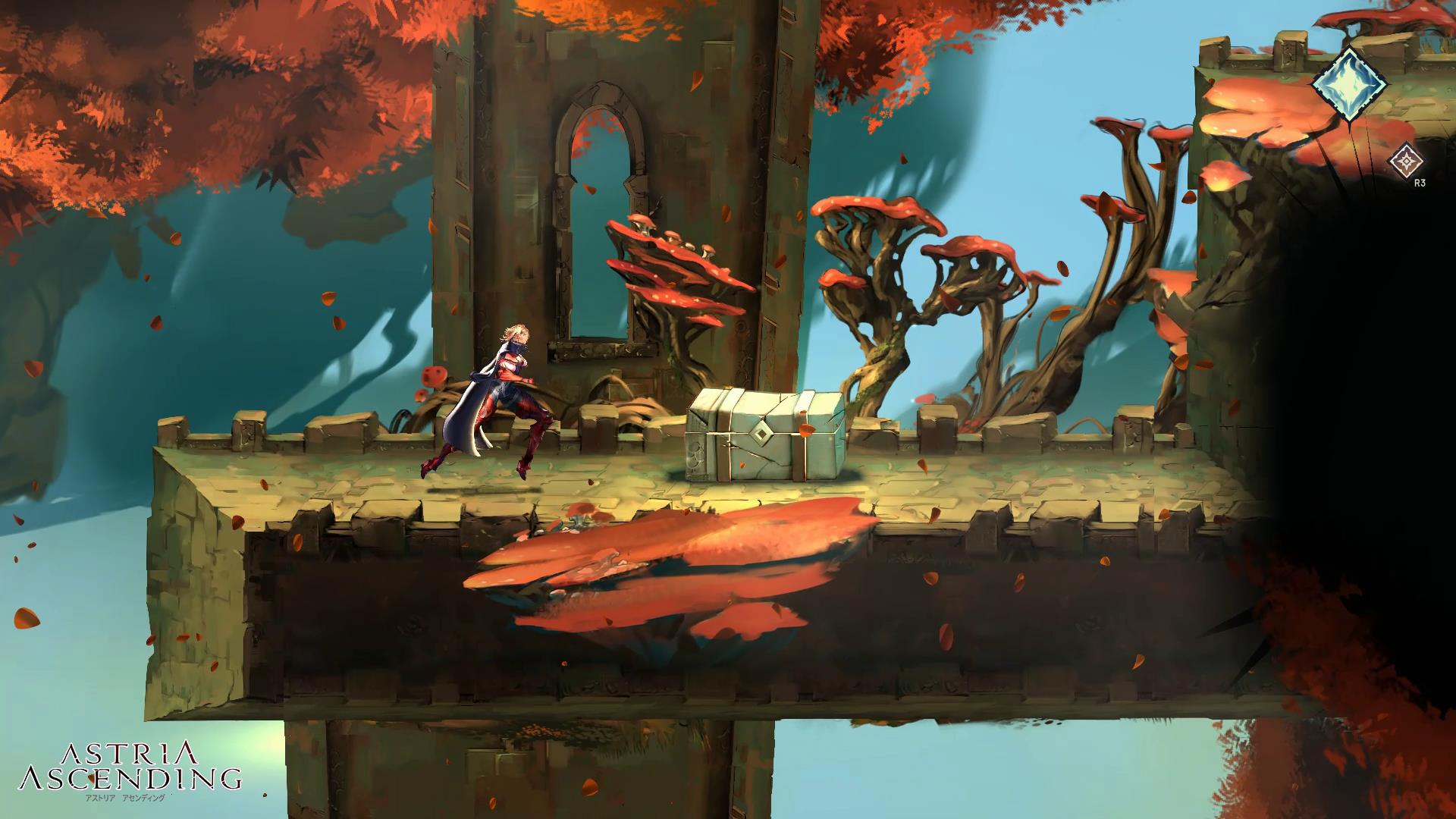 As much as I enjoyed the world building and story, the act of actually playing Astria Ascending was problematic and complex. Too many nagging details kept irritating me until I reached the point that I realized the irritants were outweighing my enjoyment of the game.

For example, the balancing of the combat system seems somewhat out of whack. The battle system is standard turn-based fare, with a fun mechanic that allows characters to build up extra strong attacks by focusing on the correct elemental attacks for foes. Fire enemies, for example, are susceptible to ice attacks, so attacking them with ice builds up some points that can be used to spend on stronger attacks later in the battle. This all should be intuitive and fun, but I could never quite get into a groove that didn’t leave me exasperated. Astria Ascending offers a ton of customization and accessibility options to allow players with different abilities to enjoy the game, but I just couldn’t settle on one that felt good to me. 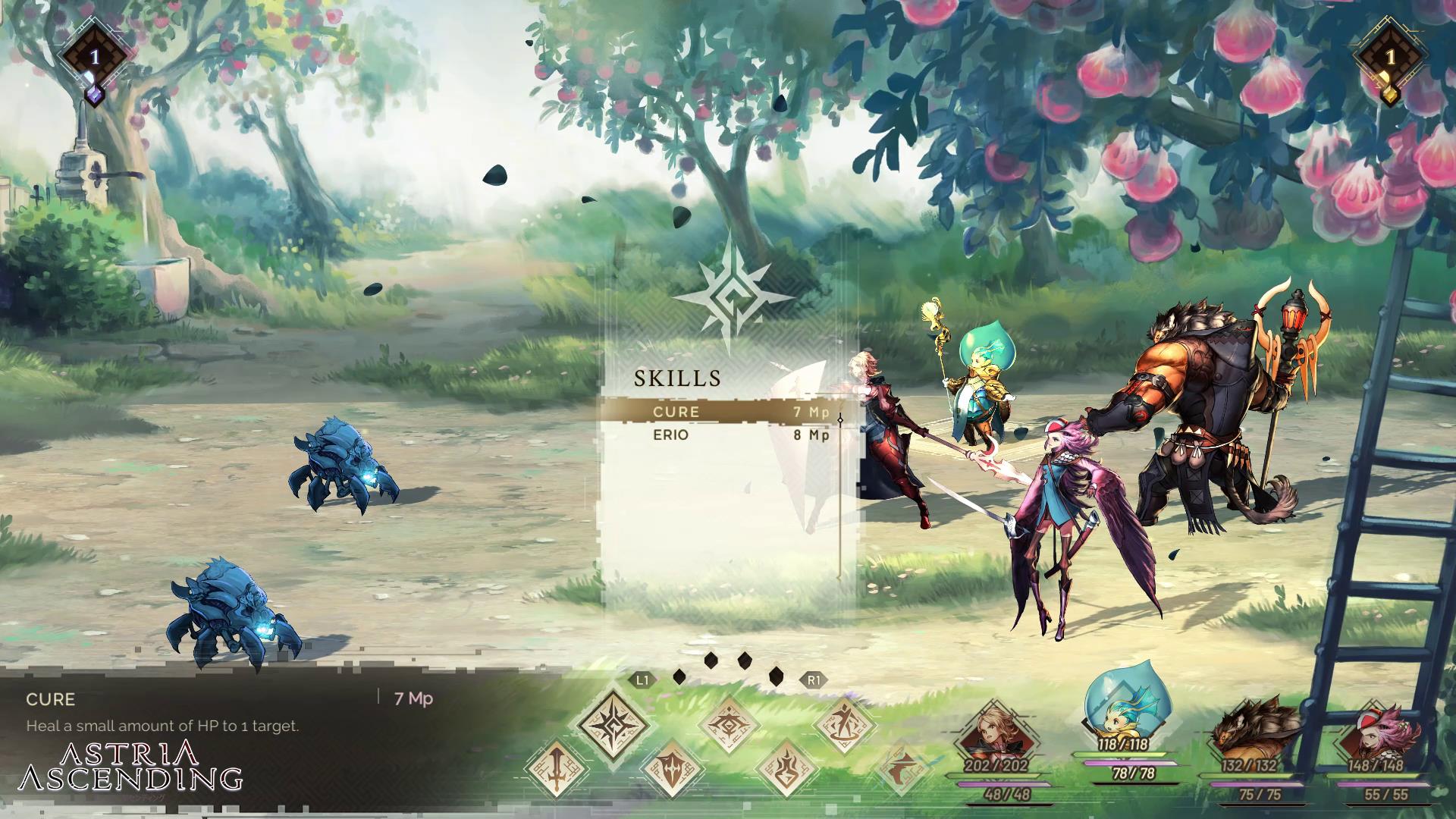 The standard difficulty seemed to skew far too difficult – indeed, when I dropped the difficulty down to “Easy”, I was still regularly facing full party wipes against trash mobs. I found myself dropping down to Easy, backtracking into previous areas and grinding quite a bit to try to build up my party. Then, with my team fully enhanced with new powers, perks, and equipment, I would return to my current mission and try to take it on with the default difficulty restored. And I would immediately get my face handed to me. This constant difficulty juggling eventually wore on my patience. The “Very Easy” mode was laughably easy, so therefore not an option. Sure, you could use it to just walk through the game, but what’s the fun in that?

The combat system feels overly reliant on status effects, which show up early and often. When you have a team of four assembled that relies on spells, and you are facing eight enemies - all of whom can cast "mute" on your entire party, you don't stand much of a chance. Most enemies in the game have a particular point of weakness, and once you discover that, you are pretty much golden going forward. But good luck surviving long enough to figure out what the enemies' weaknesses are without a ton of reloading and retries.

I had similar difficulties with the game’s job/skill system – everything just felt a bit too difficult, overwhelming, and slightly unorganized. Each of the eight characters starts in a base job – there are fighters, mages, clerics, etc. Each of these jobs is accompanied by an ability grid; earn skill points in battle and spend them on the grid to buy new perks and abilities. So far so good, right? 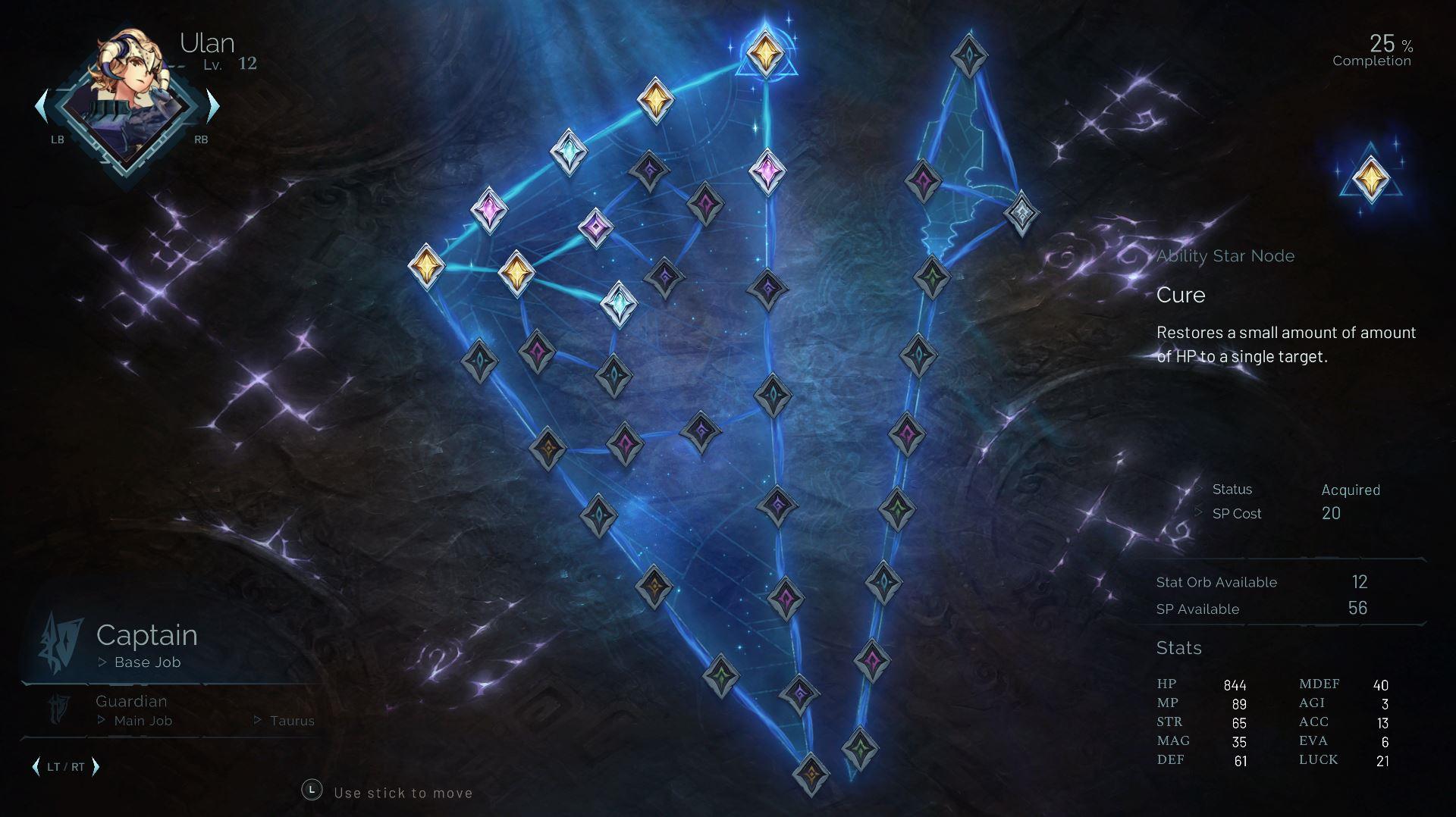 Skills are rather expensive to purchase, making the advancement through these complex “Ascension Trees” very slow. And with eight characters to manage right out of the box, there is a level of complexity that can be daunting. And then some of the skills you can purchase require a special type of “Stat Orb”, in addition to the skill points. The orbs are in short supply, and so through their scarcity the game pushes the player to focus on just a few characters from the eight, allowing the others to fall behind in advancement.  The inactive guys earn skill points along with the rest of the clique, but without Stat Orbs, you quickly run into dead ends.

Then, still in the early hours of the game, Astria Ascending allows characters to pick up a second job. I was maybe 1/8 of the way through my first Ascension Tree for most of my characters, and suddenly I had to manage two trees for each. And then it adds a “Sub Job”. And then a “Support Job”. These jobs don’t take the place of your initial “Base Job”, they are in addition to it. The entire thing is sprawling, messy, and somewhat untenable. Of course, Astria Ascending doesn't make you pursue these other jobs - you can play the entire game with the Base Job. But the other jobs look so cool you want to pursue them, and soon you are caught in skill-point-quicksand. 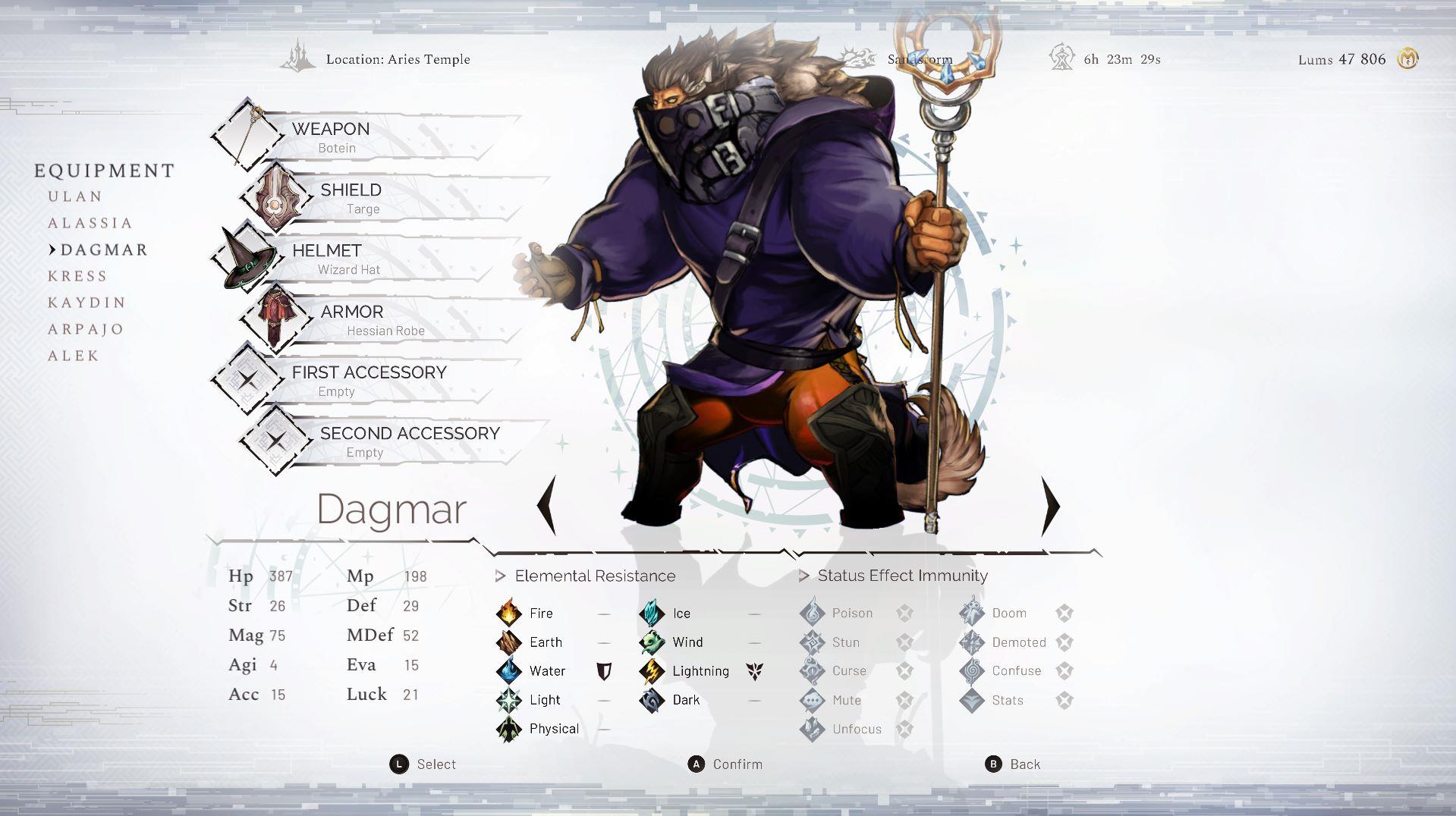 Playing Astria Ascending brought into focus the wisdom of slowly building a party in JRPGs. While it handles the characters stories and backgrounds well, jumping into the management of this crew was extremely daunting. Buying and selling gear, for example, becomes a difficult chore when you can’t instantly equip stuff while buying it. You have to bring up each item, scan all of your dudes to see who can use it, buy the right number of items, then back out of the purchase screen to scroll through everyone to equip the items. When you are managing such a big crew, it’s easy to lose track of what you bought and who should equip it. And treasure found in the field? Forget about it. All you see is the item’s name – not what type of item it is. I would rather just ignore the fact that I found it rather than scroll through 40 possible slots where it could be hiding just to equip it for a minor stat boost.

There are more issues that I’m not going to describe in detail. Maps are difficult to navigate. Quests instruct players to go to certain locations, but don’t specify where those locations are. Navigating the UI feels needlessly cumbersome. 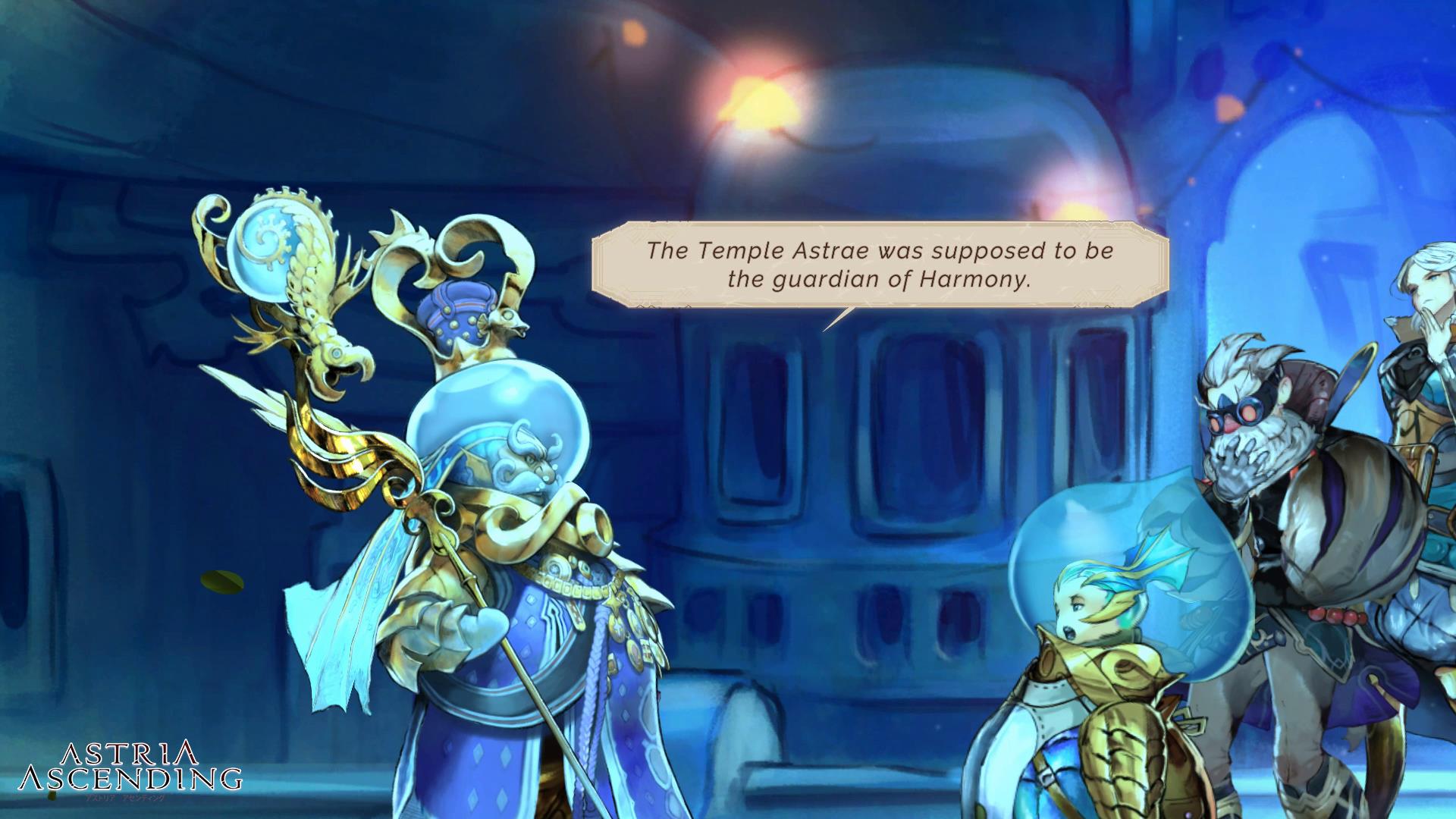 While Astria Ascending is beautiful, tells a great story, and has amazing world building, the act of actually playing the game becomes bogged down in tedium and management. There are so many characters, traits, and pieces of equipment to shuffle around, that at the end of the game, I still wasn’t sure what benefits were gained from actually leveling up. It happened all the time while I was playing, but I had no idea what stats – if any – were impacted. When you are saddled with so many characters, orbs, points, crests, jobs, and pieces of equipment that the simple act of levelling up gets lost in the shuffle, it might be time to take a step back. The game is clearly a labor of love, and is likely worth a look for JRPG fans for its cool characters and visuals alone. Just enter with the knowledge that you will be spending a lot of time in menus, trying to wrangle the game into something you actually want to play.

Astria Ascending is a gorgeous JRPG with wonderful world-building that overwhelms the player with characters and progression systems. With somewhat standard-feeling combat that is overly punishing at the default difficulty, I felt at a loss as far as what to concentrate on to improve my party. Astria Ascending tells a beautiful story, but too often that story is buried behind too many mechanics and systems.