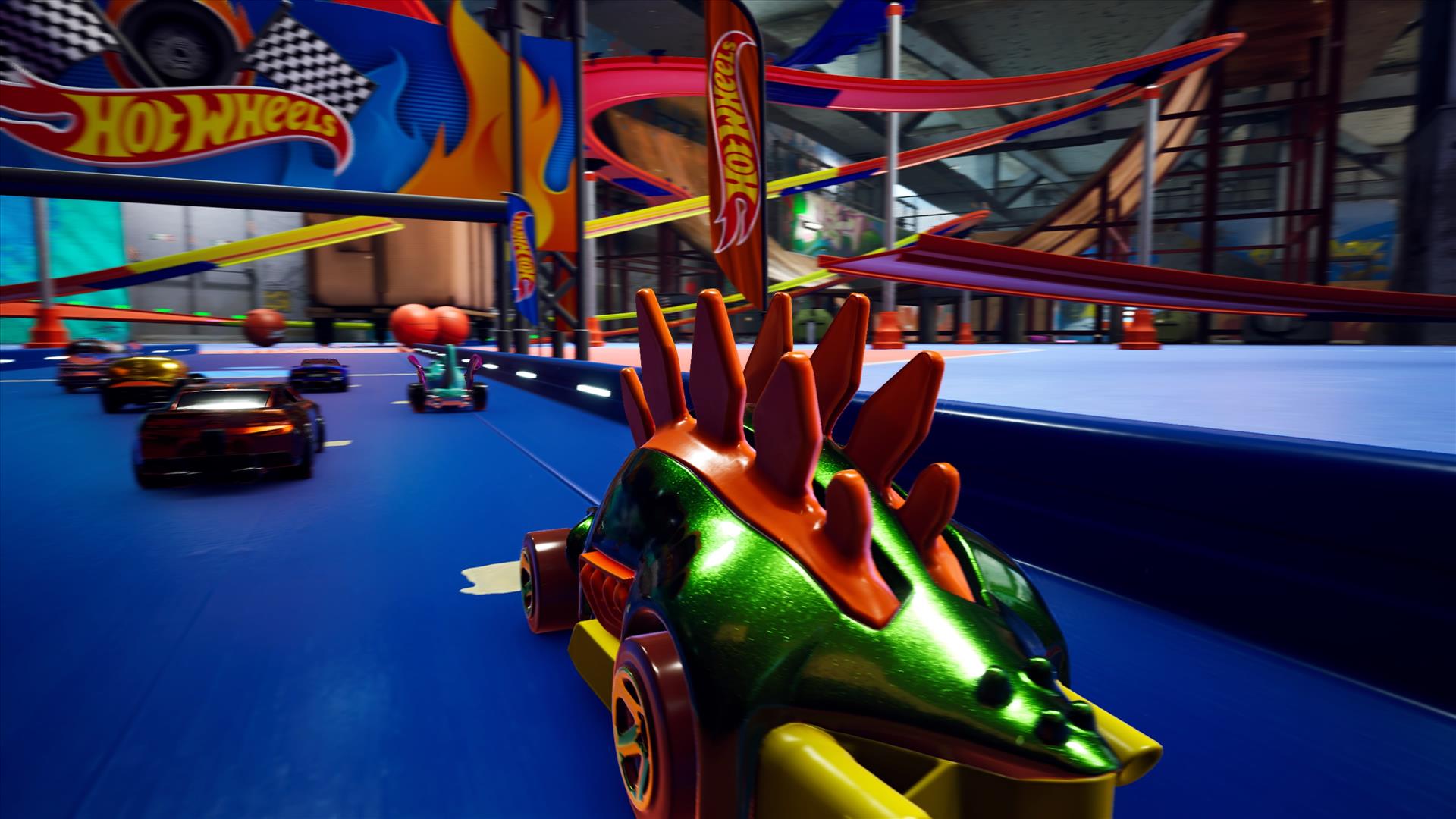 I’ve gone on record many times over the last few years about the fact that I’m intimidated by modern racing games. When racing mechanics became so realistic that I could adjust the air pressure in my tires, I “nope-d” my way right out of the genre entirely. I greatly missed the days of arcade racing, when I could jam on the gas and just go, whipping around corners with little concern for such trivialities as “braking”. 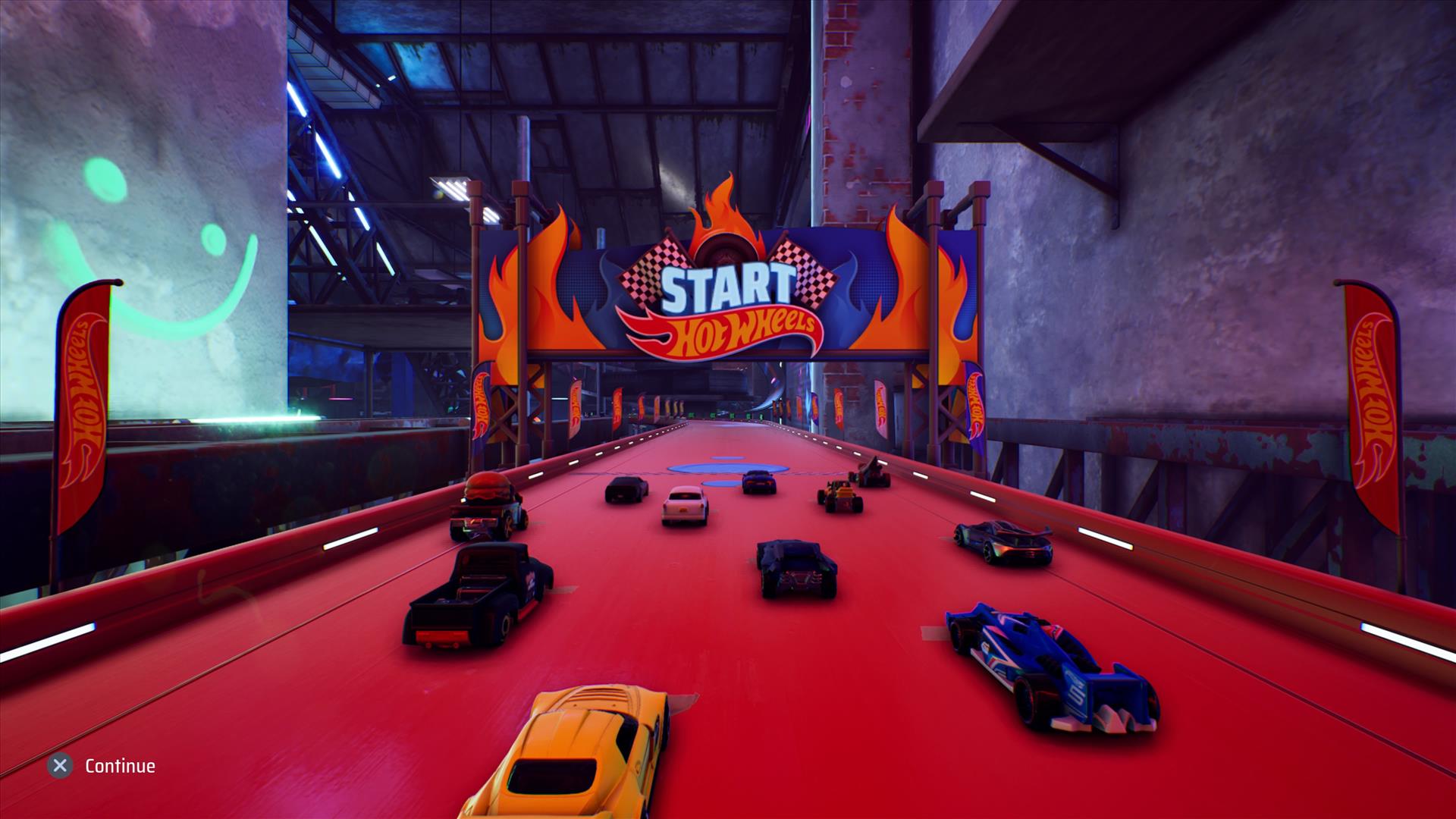 It seems that developer Milestone – the folks behind such franchises as MotoGP and Monster Energy Supercross – have heard my silent prayers. Teamed with Mattel, Milestone has taken a wild swing for the fences, delivering a AAA arcade racing title based on the Hot Wheels property that may very well be my favorite racing experience of the last decade. Yes, damn it, the game based on the collectable $0.99 toys you see at the grocery store checkout is not only good, it is fantastic.

Milestone went for broke with this game, delivering every feature a fan could ask for. Collectable cars. A livery to change the way they look. Wild fantasy tracks. A track builder to make your own nightmare creations. A customizable basement in which to build them. Online play. A robust single-player campaign. Splitscreen races so you can whoop up on your kids. The features go on and on. This is no barebones licensed game; this is a game constructed to be a solid foundation to build upon, and indeed, there is an extremely robust post-release plan to keep the hits coming. 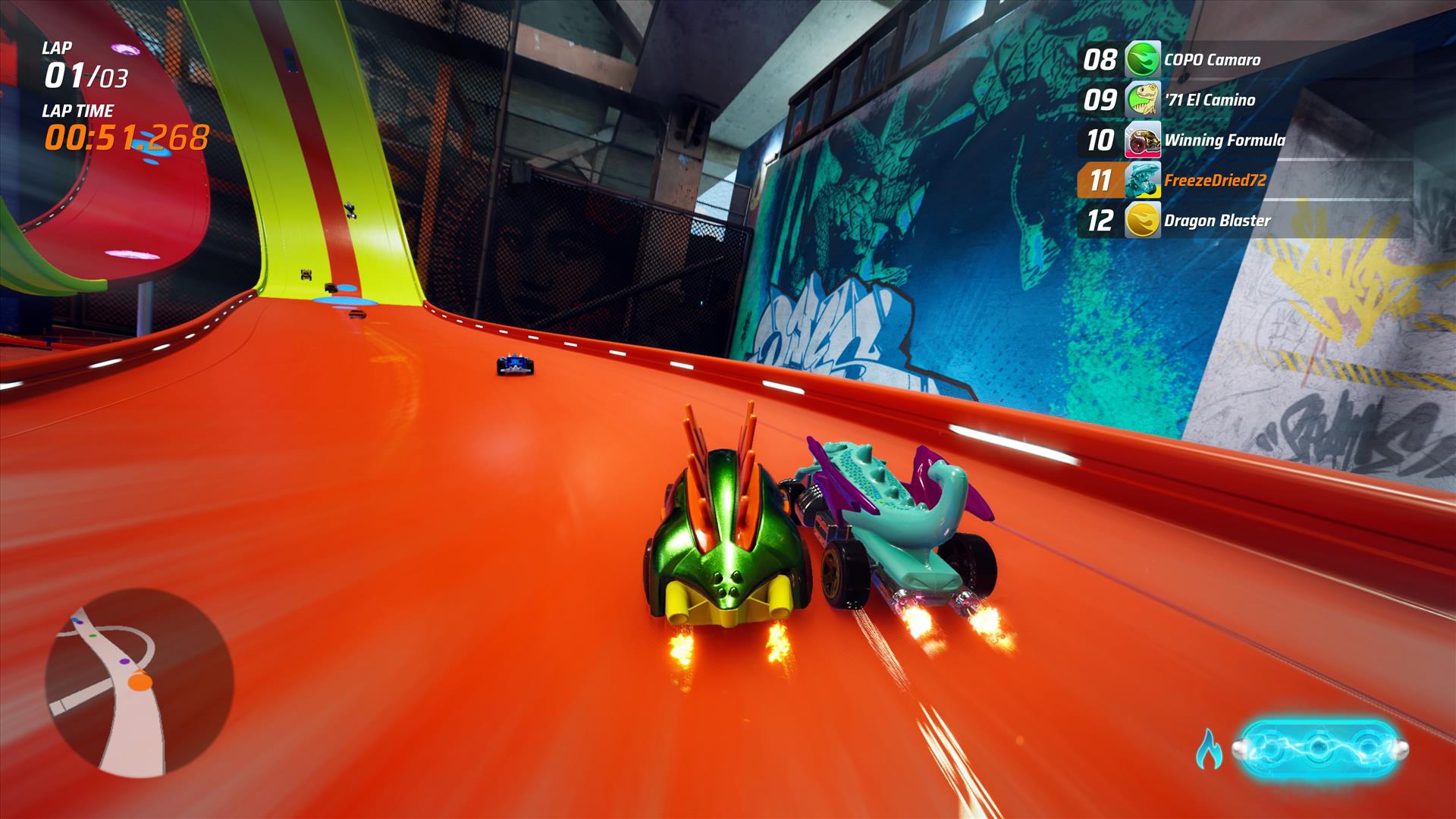 There’s so much here that it can be a little overwhelming at first, so I would recommend just jumping into the single player campaign to get your feet wet. Played out on a sprawling city playmat, the “Hot Wheels City Rumble” mode has players moving from point to point on the map, engaging with single races and time trials. This is the quickest way to learn Unleashed’s racing mechanics, and as a bonus, you can unlock some new cars and start building out your collection.

The racing mechanics are simple, pure, and intuitive. Press the right trigger to go. Hold the left trigger to brake, tap it to drift. Drifting builds up boost, which you fire off with the “X” button. That’s it. Rip through straightaways, drift around corners, deploy boost strategically to get ahead of the pack. And, of course, don’t go sliding off the track. 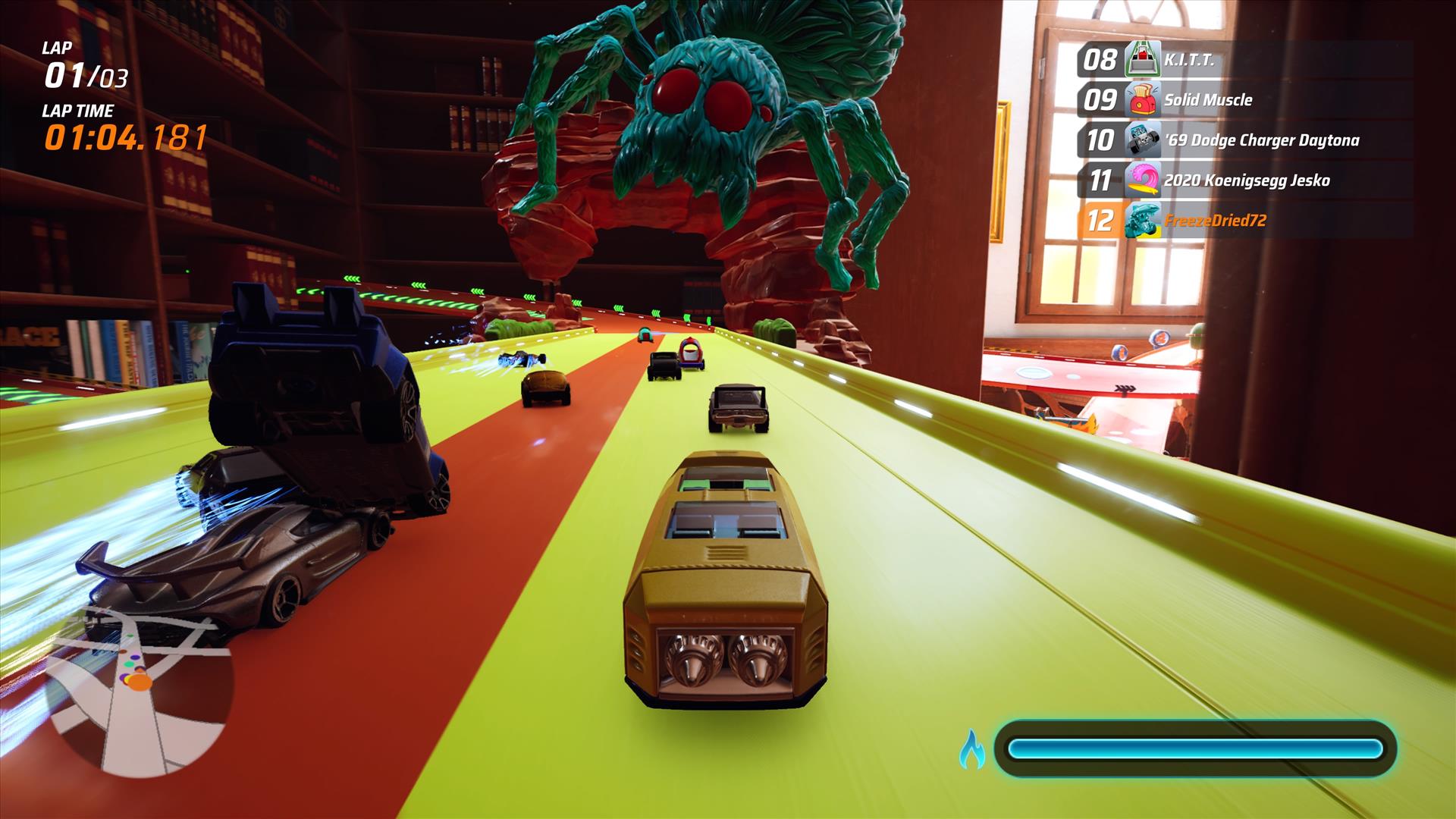 That’s easier said than done. Each race has two levels of reward – one for reaching the podium, and the other for winning. Early in the game, I scoffed at the idea of not winning a race, let alone not reaching the podium. But as Hot Wheels Unleashed progresses, the difficulty ramps up substantially, and by the end of the campaign it will be all you can do to keep your tiny rocket-on-wheels from careening off the track, tumbling across the basement and skittering to a halt off in a darkened corner. Tracks become tighter, sharper, and more insidious, obstacles become more aggressive, and the later time trials in the game will test every ounce of your skill.

Oh yes, Hot Wheels Unleashed will make you curse. When you are heading into the last turn, and you accidentally bank too sharply and go sliding off of an open edge, you will curse. Or when you miscalculate your boost and putter out at the top of a loop-de-loop, clattering to the ground below, you will curse. Or when that daggone spider thing spits a web on your car at the worst possible moment, stopping you cold for a few precious seconds, and Marty McFly comes blasting around the corner in his stupid DeLorean to rip past you and win the race, you will curse. More than once, I howled and shook my fist at Snoopy. I cursed often, loudly, and enthusiastically. 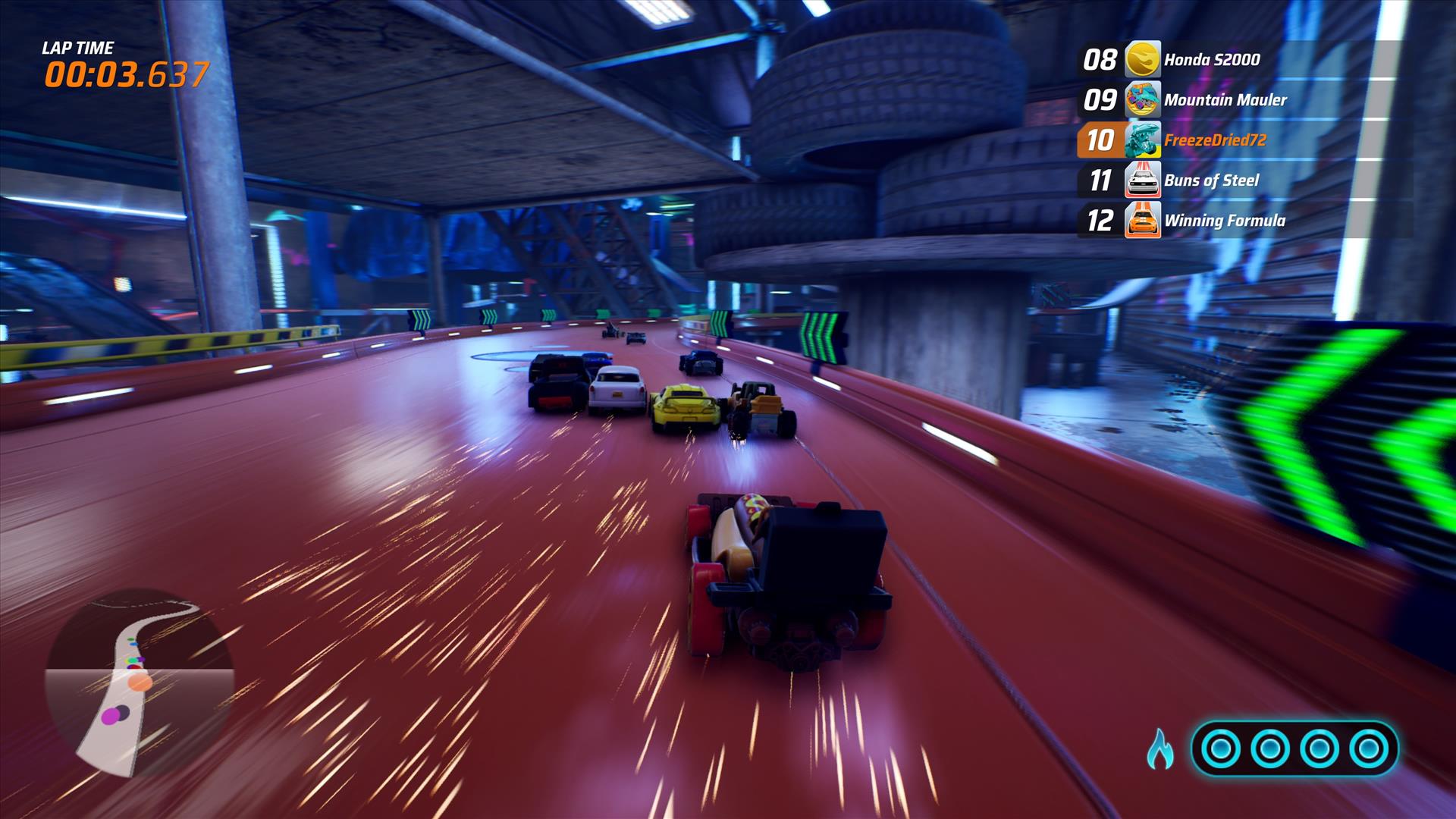 Of course, those curses were just the punctuation on my chorus of gasps, whoops, and laughter. For every flash of righteous anger Hot Wheels Unleashed delivers, it also summons moments of pure joy and something approaching awe at the awesome tracks the developers have concocted for your racing pleasure. Tracks go careening up walls, across ceilings (with the assistance of magnetism), through ducts, across furniture, and out open windows hundreds of feet above the ground. I can’t tell you how many times I was caught off guard by the audacity of the track design in Hot Wheels Unleashed. It is exactly as wild, unexpected, and challenging as you want it to be.

All of this magic is delivered in the most polished, beautiful way imaginable. I played Hot Wheels Unleashed on both PC and PS5, and on both platforms, the game is needlessly beautiful. The devs went above and beyond the call of duty here, delivering crisp, sharp visuals that let you see every detail on the cars, the tracks, and the environment through which you are racing. I played Hot Wheels Unleashed on a 27” monitor, a 65” 4K television, and a 120” projection screen, and it crushed my expectations in every instance. This is a game to show off to your friends if you want a quick way to demonstrate the power of your next-gen system. Sure, Assassins Creed is pretty, but does it have a Batmobile? 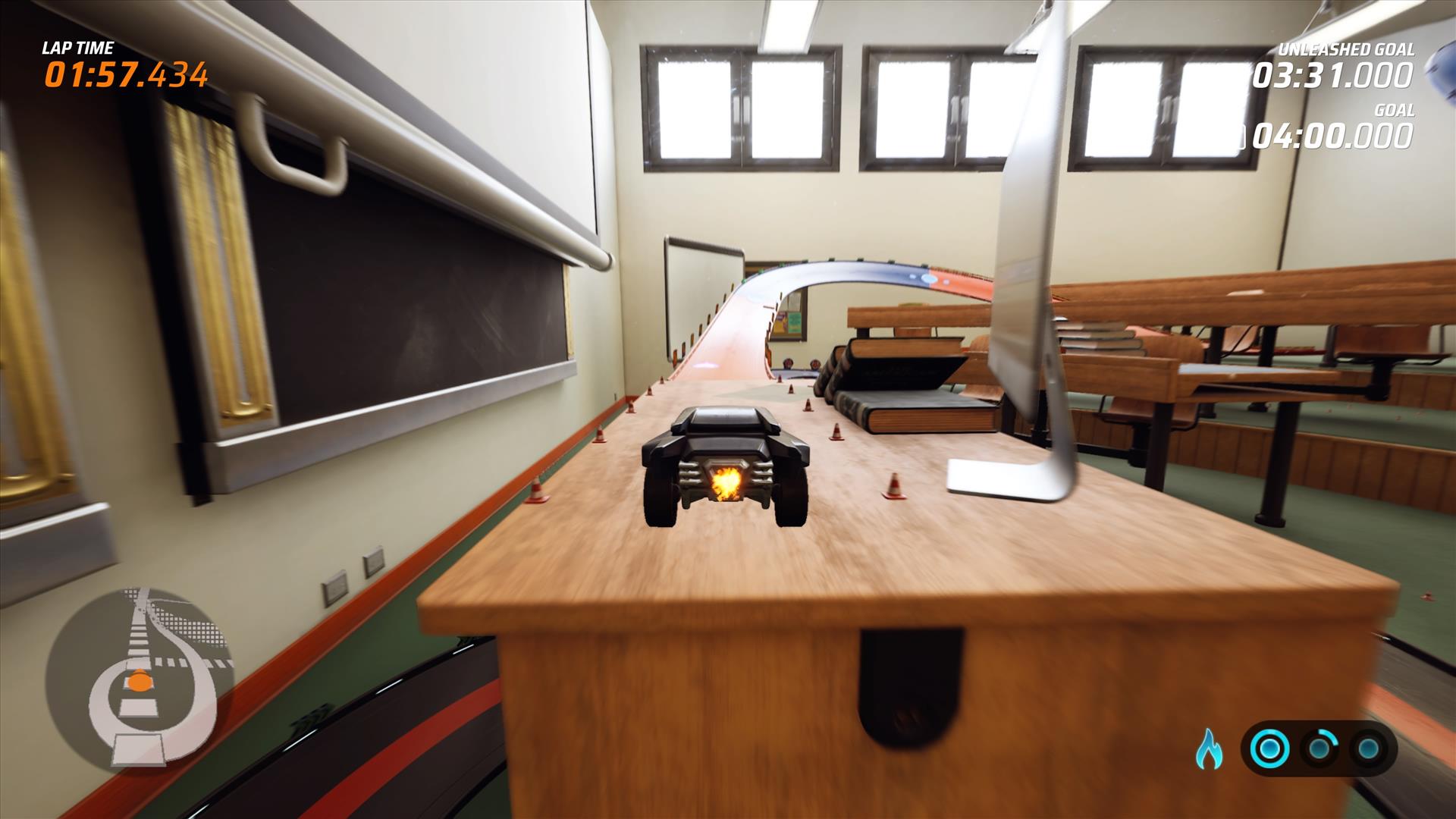 Yes, Hot Wheels Unleashed has a Batmobile (and it shoots fire out of the back when you boost!). It also has a number of other licensed cars, and a ton of cool iconic Hot Wheels cars you will instantly recognize. Playing “I had that one!” is one of the best parts of the game. Cars are either awarded as prized or unlocked through a Blind Box mechanic, which can be purchased with in-game currency. There is also a rotating shop that will allow players to buy particular cars outright, also with in-game currency. A slick upgrade system allows players to improve their cars from Common to Rare to Legendary – though the very highest level, Treasure Hunt, must be lucked into with a lottery-winning Blind Box drop.

The nice thing about this steady drip of cars is that though there is DLC planned, Hot Wheels Unleashed feels like a complete package out of the box. You won’t be tempted to drop more real-world cash immediately to buy the best cars. You have to earn them in-game, which removes any hint of pay-to-win ugliness. 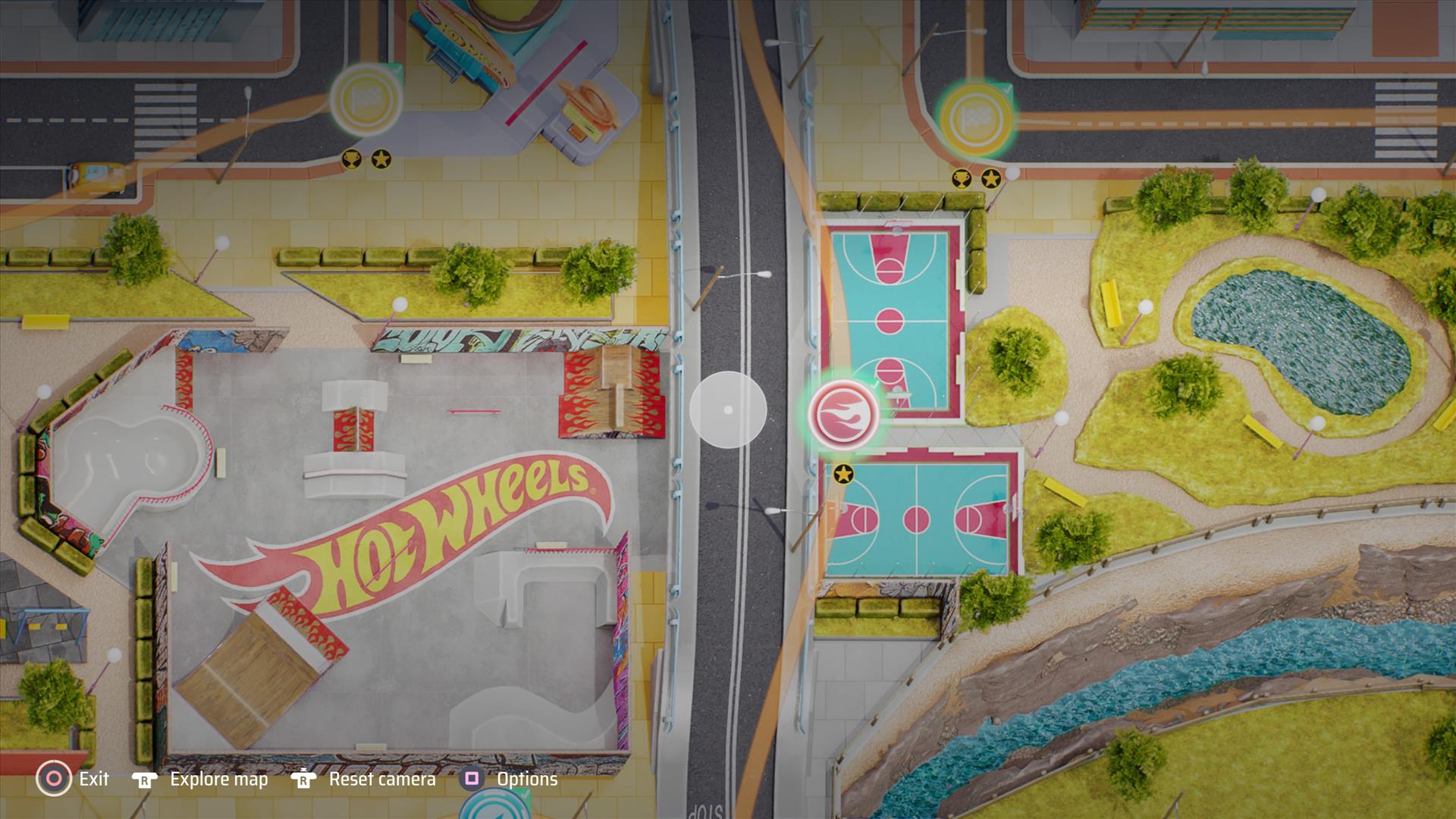 The other features are fun and accessible. I really enjoyed the Livery painter, though I did discover a disturbing proclivity to paint every car various shades of purple. I messed with the track editor for a few hours, but found that I am terrible at planning out tracks that people could actually race on. You actually have to validate the tracks by racing on them yourself before publishing them, and I found that what I thought was “exciting” in design turned out to be “impossible” in practice. I’m looking forward to seeing what the community comes up with; I fully expect some truly wild creations within days of Hot Wheels Unleashed’s release.

I only have two minor grievances with Hot Wheels Unleashed that are holding me back (ever so slightly) from giving it a perfect score. On the city map/mat, there are certain points that the player can’t progress past without solving a little riddle. The game wants the player to race particular races with certain cars to open these points and progress in the campaign, which is indicated by an obtuse little bit of text for the player to decipher. I found that these “secrets” felt a bit out of place and needlessly obstructive. I just wanted to get on with it. 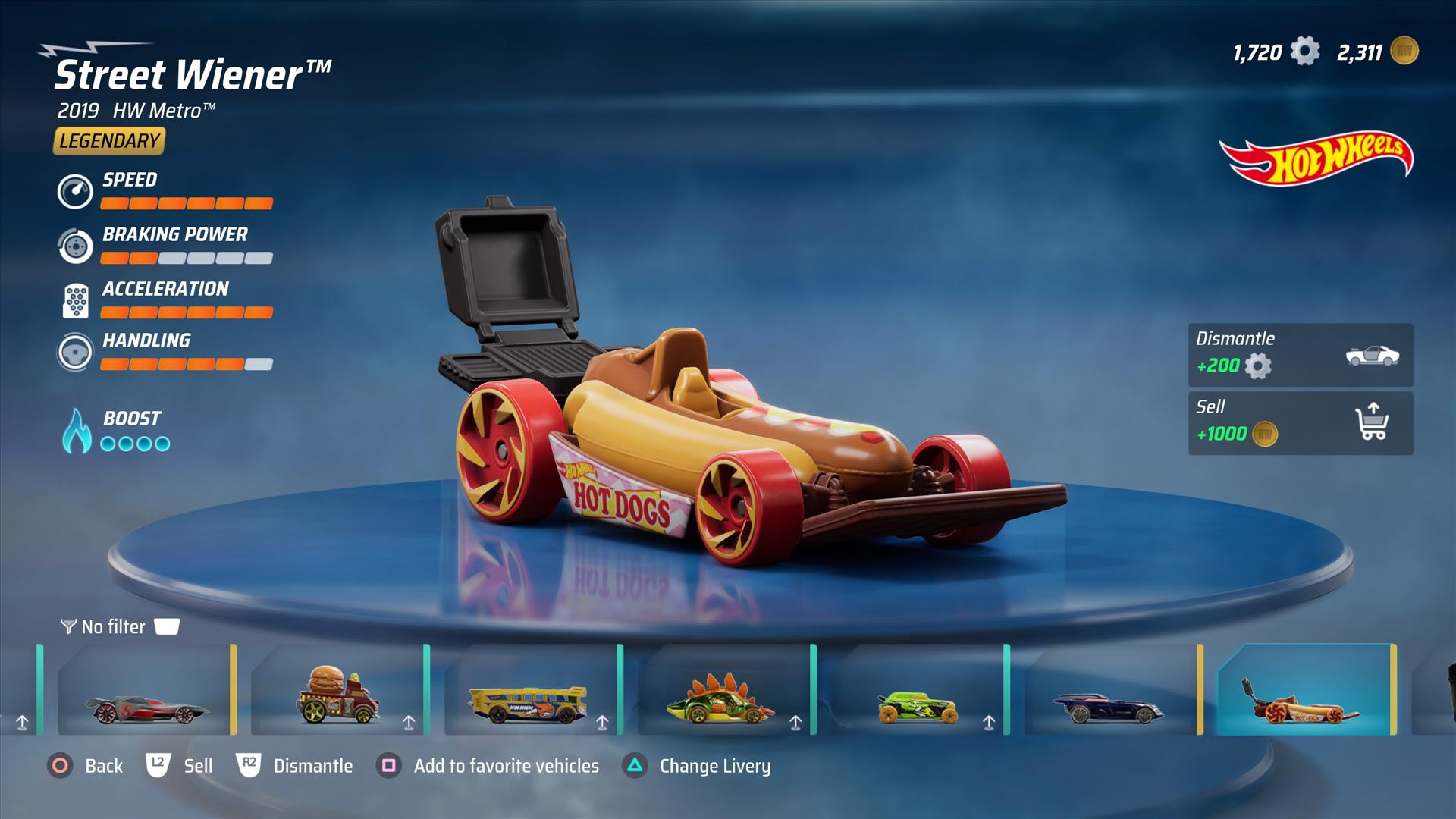 I also thought that a few additional race types could have spiced things up a bit. Most of the campaign consists of Quick Race and Time Trial events, which are punctuated by occasional challenging Boss Races. But a few different race types would be very welcome. Of course, that may come with the extensive DLC that is planned post-release.

But my quibbles are just quibbles, and should in no way dissuade anyone from picking up this fantastic package. Hot Wheels Unleashed is a thrill machine; a blast of nostalgia delivered in the most modern and beautiful way possible. Endlessly addictive, Hot Wheels is fun for all ages, but tough enough to challenge experienced racers – or at least amuse them for a while. This is one of the best games of the year, and one of my favorite racing games of all time. Thanks for building one for people like me, Milestone.