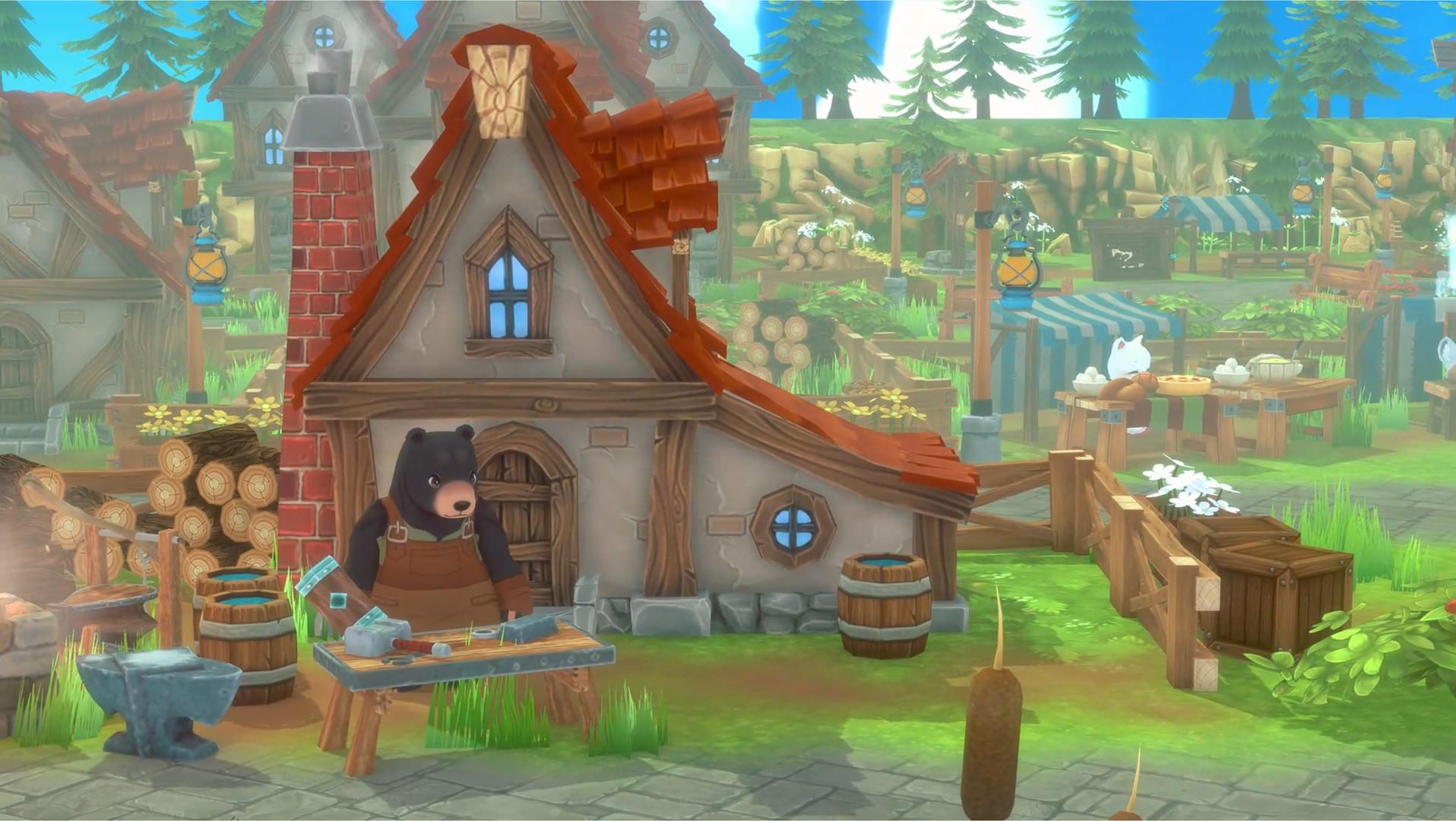 Facing down my debut review for this site, I'm looking through what games to pick. I see a cute anthropomorphic hack and slash RPG and think to myself, "This looks like an easy and safe pick, and when I'm done my kids can play it." Boy, was I in for a surprise. 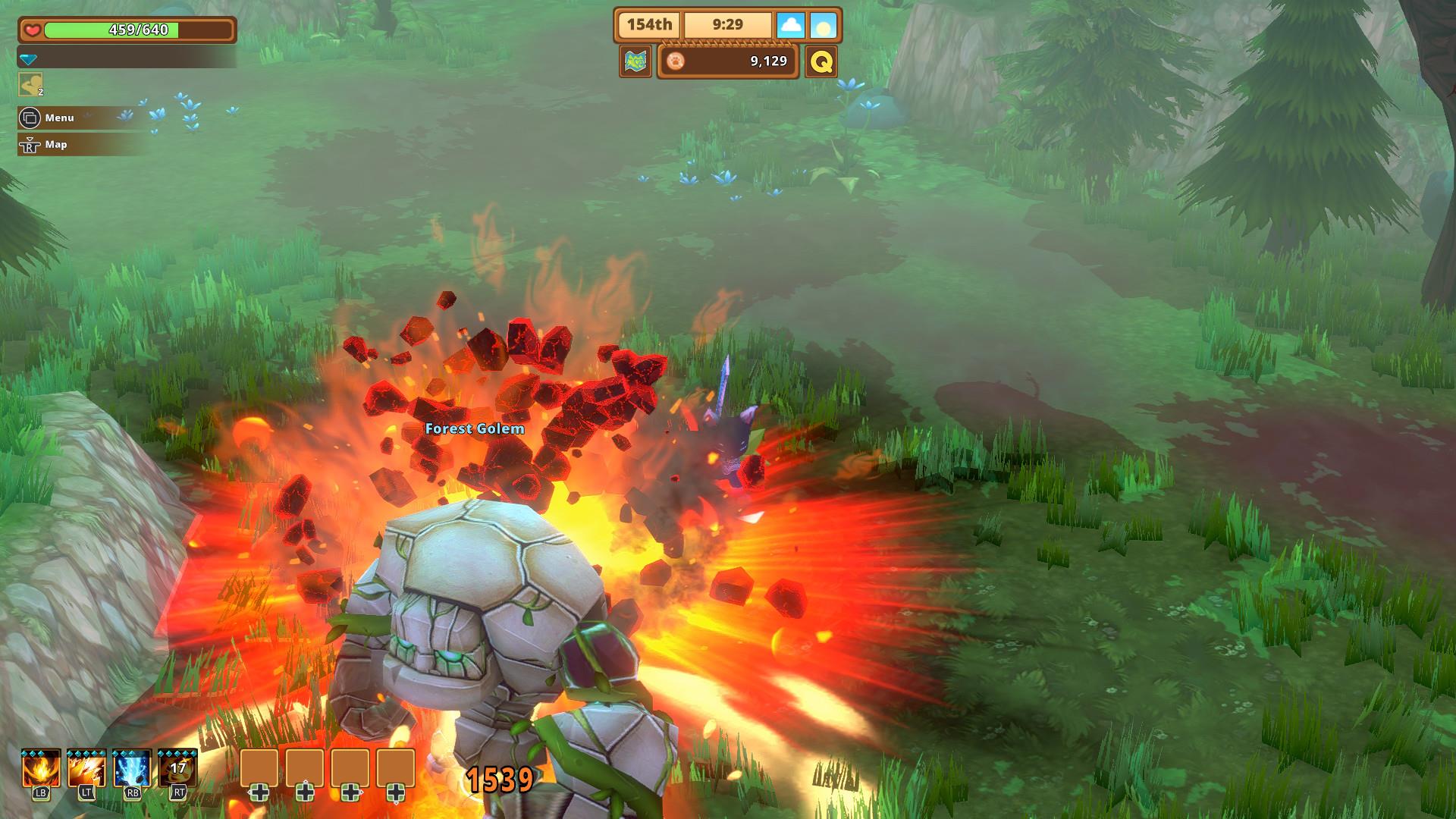 Kitaria Fables, developed by Twin Hearts and published by PQube, stars Naya, a kitten soldier. Our hero has been assigned to the small Paw Village with orders to keep the inhabitants safe from the monsters in the area that have become increasingly more aggressive. This village happens to have been the location where Naya’s grandfather’s farm home was located. How convenient.

The storyline for the game is propelled by numerous fetch quests, some of which don’t open until you’ve completed other tasks. There is a day and night system where time flows very quickly. One second counts as a minute in game time, so that a full day is actually 24 minutes long. Oddly enough, there’s no penalty for staying up too late. Never did I end up passing out from exhaustion after hitting a specified time. 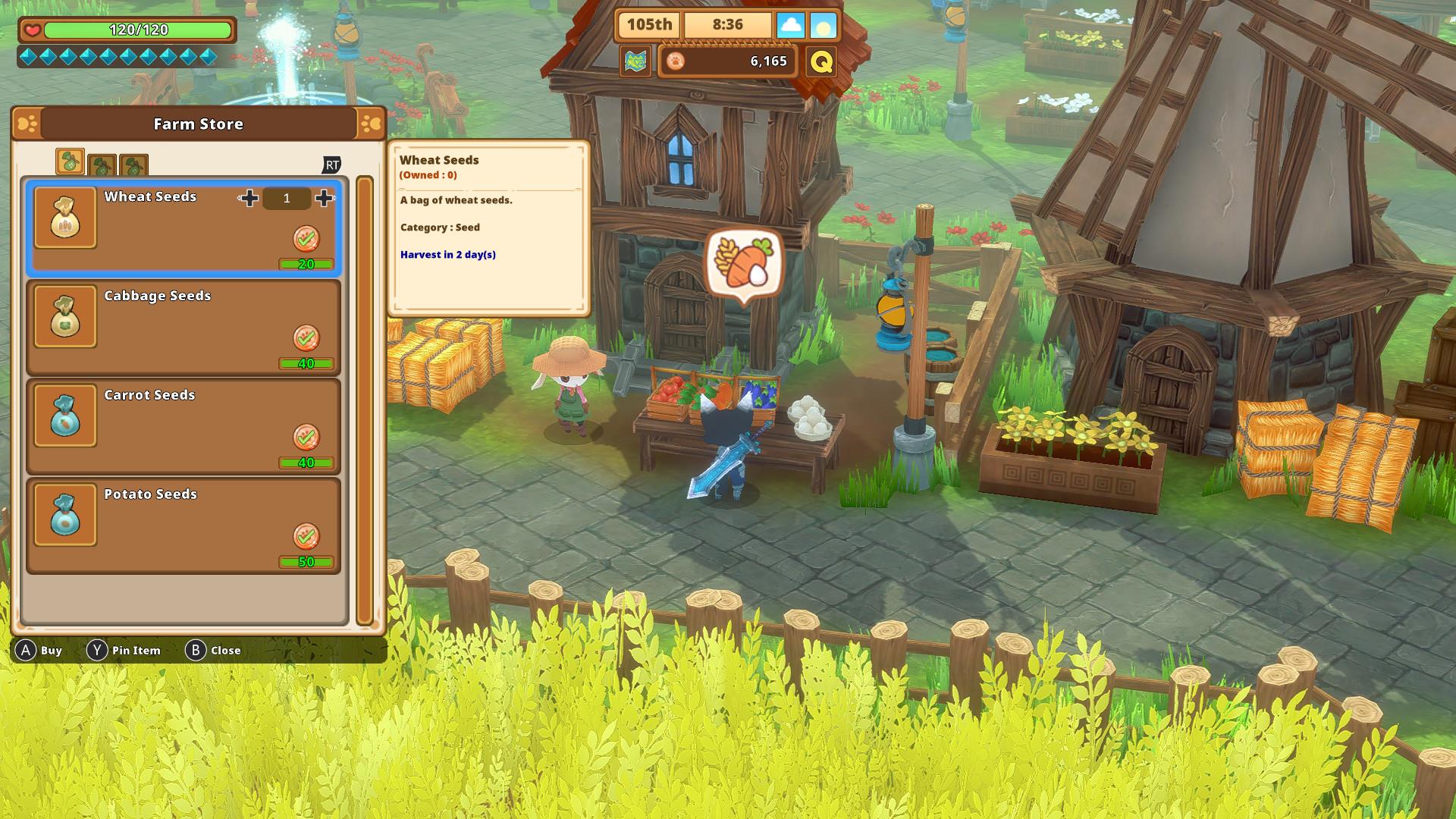 There is a lock-on mechanic for fighting as well as a dodge. You have close and ranged combat, with spells and abilities. There is no leveling system like with a standard JRPG. Instead, all of your character’s stats are linked directly to the equipment. To increase your attack power or defense, you’re required to upgrade your weapon or create armor. You can also create accessories that give you different abilities and stats that boost your character. You can also craft your spells, each spell requiring different elemental orbs to be able to craft.

Farming plays a very important role in the game, as it’s the fastest way to make pawpennies (the game’s currency). If you’re like me, in an attempt to get stronger more quickly it required a lot of pawpennies. Not only  to upgrade weapons, but also the farming equipment and spells. Sometimes it would take money to make the items needed to upgrade, and then more money to make the upgrade. Each weapon upgrade would also require the previous weapon to be upgraded, with the price scaling up for each weapon. 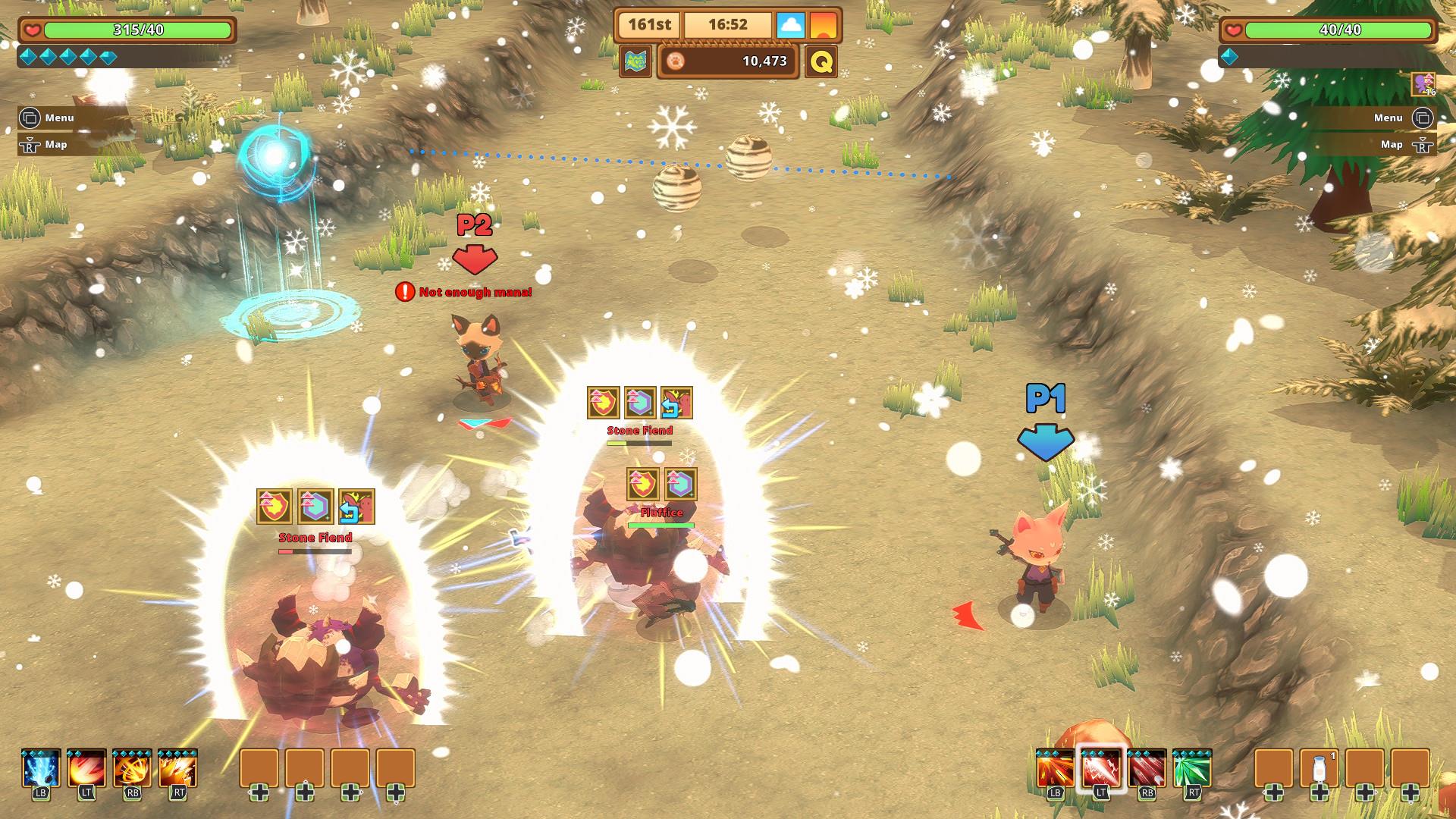 This game shines when it comes to the story. It’s engaging enough to pull you in and keep you wanting more. However, after finishing a quest, the game won’t initiate the next part of the line unless you go to bed or die. Dying will transport you back to your house on the following day as if you’ve gone to bed. I didn’t notice any penalty for dying other than being transported away from an area that I was currently farming for items, and then needing to walk back. 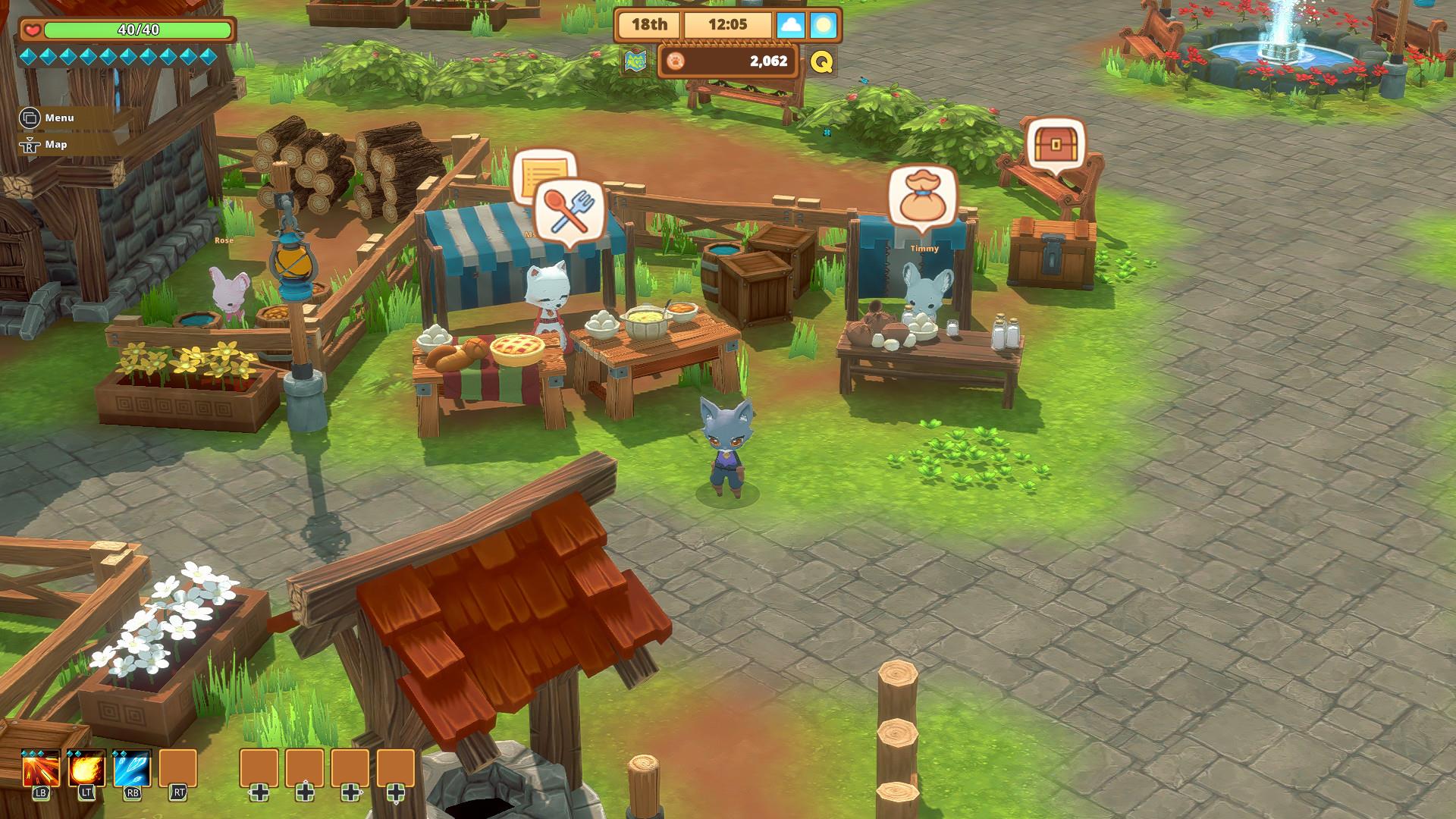 I played on an Xbox One and there were a few things to note about the couch co-op. I noticed input lag when two people were playing, and it was pretty bad. I would tap the dodge while fighting a monster and would get no reaction within the game while my son was playing with me. Also, if your partner opens up their inventory, because the game doesn’t pause while it’s open, there was a chance it would open up directly over where you were fighting monsters and would completely block the view.

Speaking of inventory, you start with a limited amount of inventory but can upgrade it to hold more items. There are various chests around both your farm and towns. None of the chests however are linked so that anything you place into one chest is only accessible in that chest. So you have to mentally keep track of what items are in each chest. Items can be an issue; I highly recommend that you save every item dropped, as at some point in the game you will use that item, whether it’s for a quest or used to upgrade an item or used to make something else. 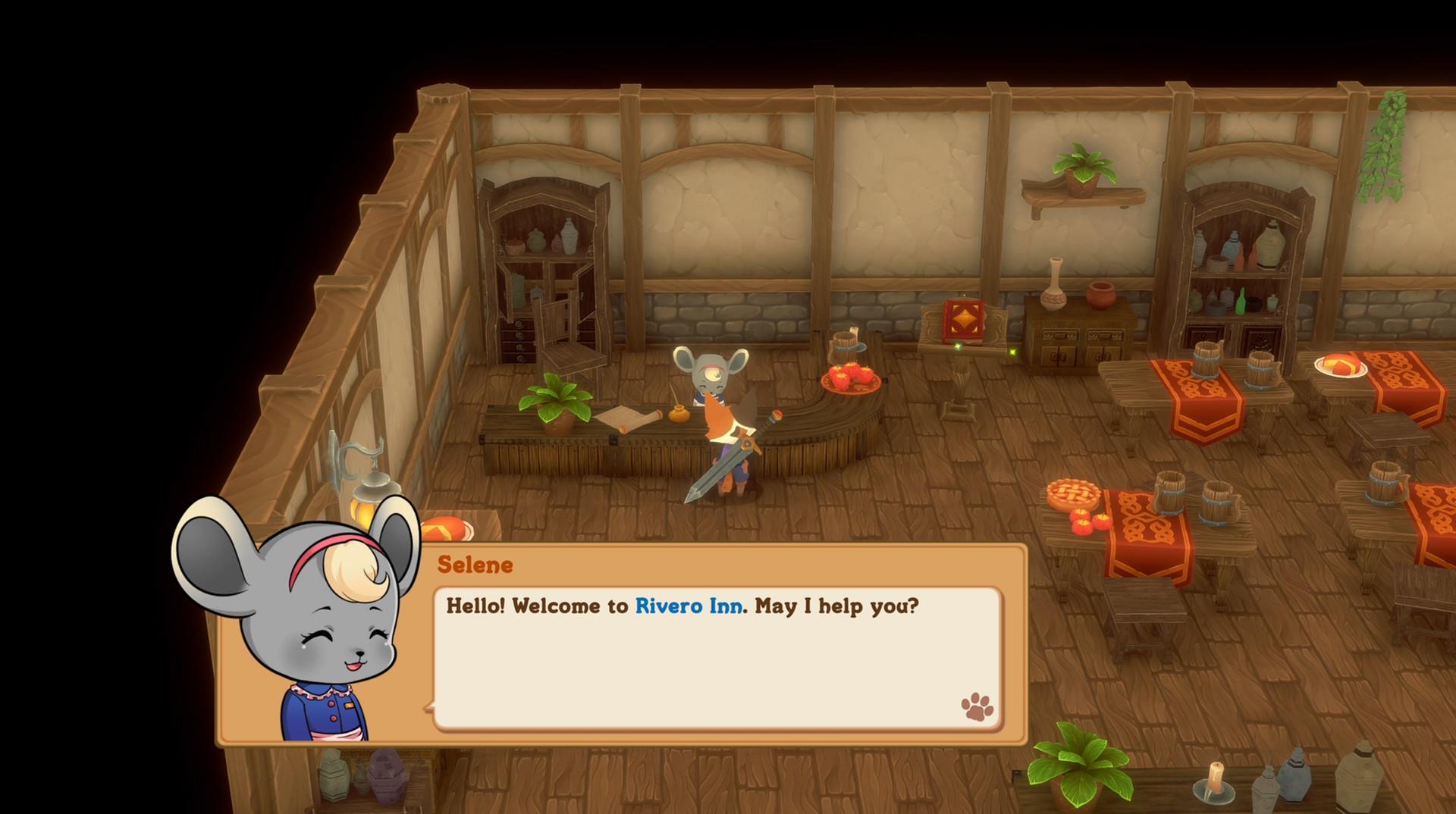 Overall I enjoyed the game. I recommend Kitaria Fables to RPG fans, but with the caveat that you will spend a lot of time farming; so much so that it could get old, turning you off from completing the storyline. But with the ability to effectively dodge all enemy attacks with timing it would be possible to complete the game without ever upgrading a weapon. This would ramp up the overall difficulty of the game for anyone who wants a challenge.

Later enemies are stronger and take a lot of hits from the starter sword. The real trick would be to not get swarmed by a lot of enemies because the amount of dodges you have is limited without letting it recharge. The issues I had with the couch co-op, however, does take the score I would have given down. It made me not want to play this game with my kids, even though I originally thought the game would be great for us to play together.

Kitiara Fables is a fun action RPG, with significant time spent farming in between quests. Though there are some issues with couch co-op, the story is still entertaining enough to recommend a look. 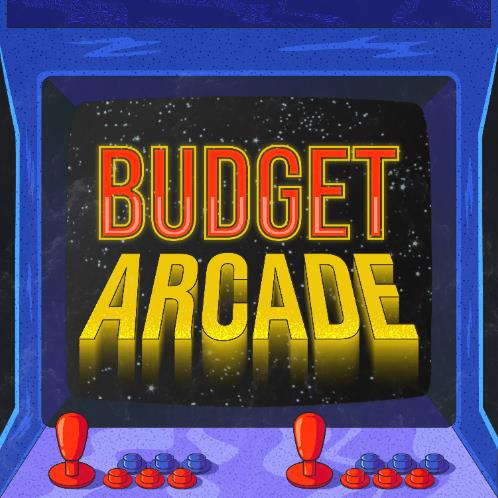