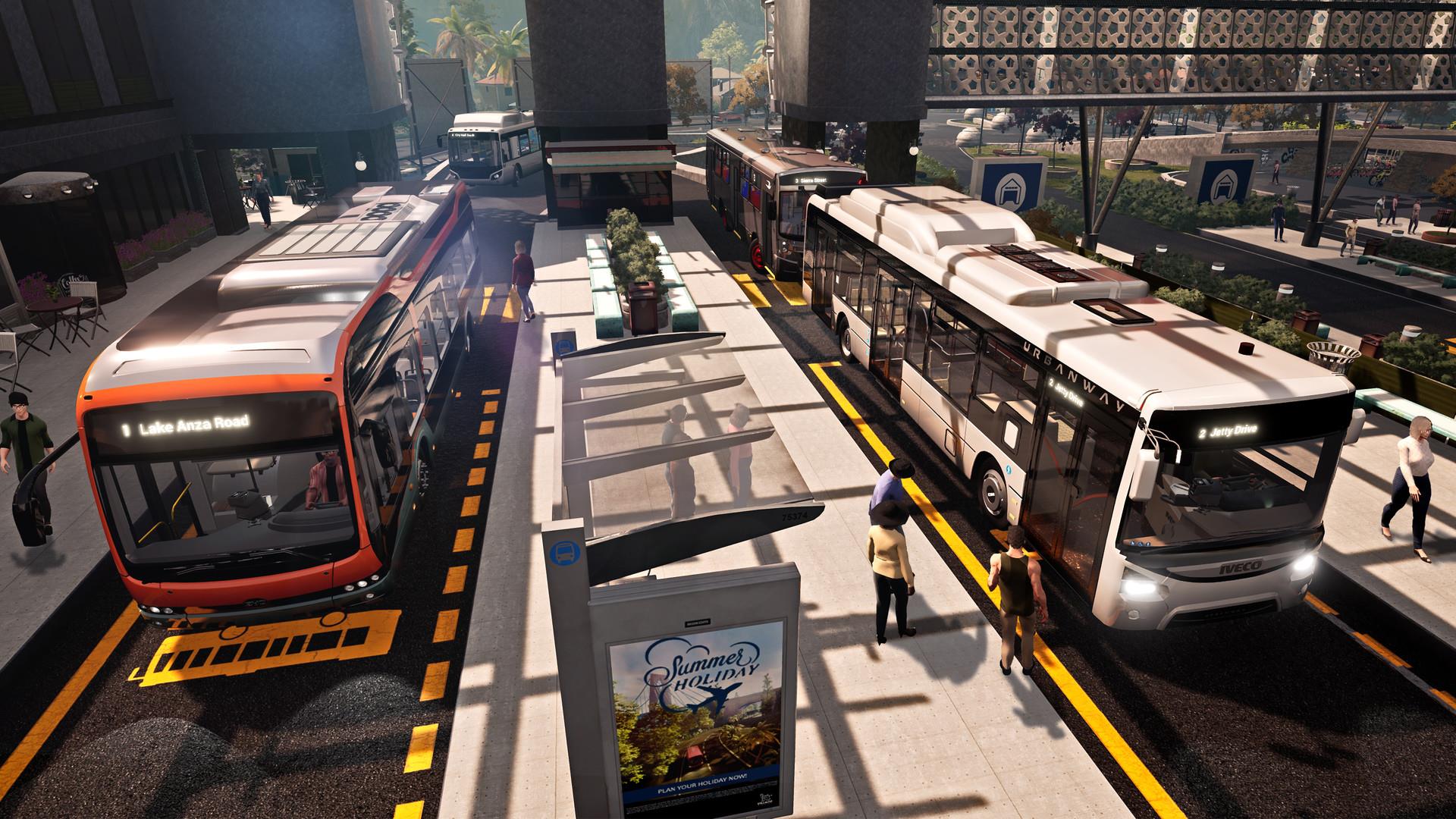 I’ve never been someone who’s gotten into the simulation style of games. I don’t have anything against them, they just never seemed like something I would gravitate towards. Then Microsoft Flight Simulator came out, and the game was pretty, and fun, and pretty fun for the most part. There was something about hopping into a plane and flying around my city. I was able to locate my job, my apartment, my parent’s house, and the football stadium.

The point I’m trying to make, albeit terribly, is this is not a genre of game that I am familiar with in any capacity. My knowledge of them comes from what I see as I’m browsing the internet. I know they exist, in many forms, but I don’t bother them, they don’t bother me. It’s how we coexisted for years, until now. Flight Simulator convinced me to give the genre a try—but does Bus Simulator 21 hold my attention long enough to persuade me to continue down the simulator path? 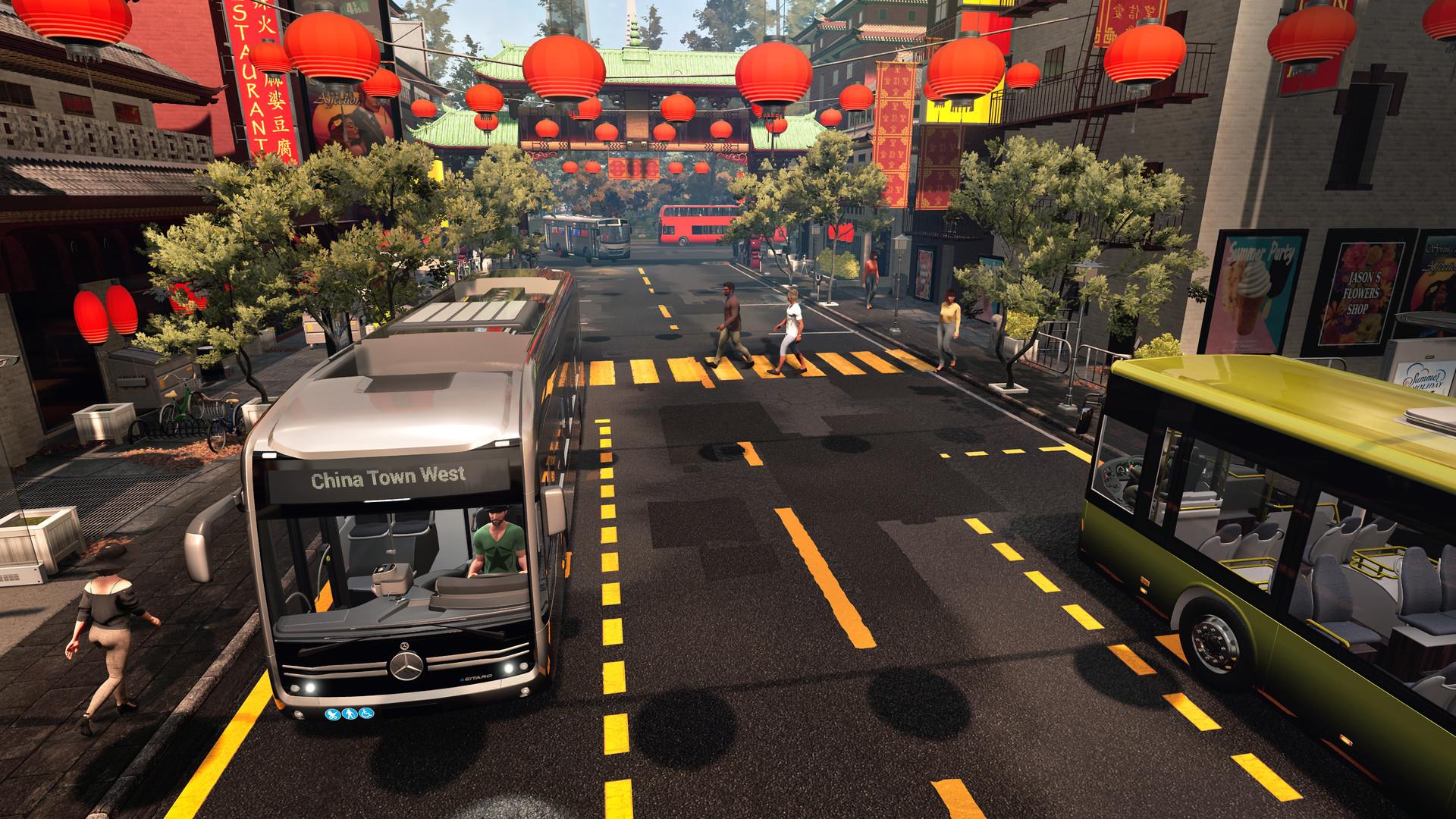 In the circles I run in (more like a brisk walk if I’m being honest) simulator style games are seen as memes. Not that they’re bad games, just that simulating something that can seem mundane just doesn’t have the appeal as skydiving from an airplane to take on 100 other people doing the same thing. But how wrong I was.

You start out in the fictional city of Angel Shores, a place heavily influenced by the San Francisco Bay Area. Never having been to the Bay Area myself, it does appear exactly how television and films show it, with its coastlines, bridges, and Chinatown. The game wastes no time getting you right into the action. You’ve decided to start up a bus system. The last one in town was driven into the ground by poor management. And so you, with the help of Mira, the jack of all trades, you embark on picking your first bus and are thrown into the driving portion instantly. Bus Simulator does not have an engrossing story to weave, but that’s fine, I don’t need it. I manage an up-and-coming bus system for Angel Shores. As my bus line grows in popularity so does the number of buses I own. I create more routes to accommodate the need, and in turn my map continues to grow giving me more places to drive to and from. 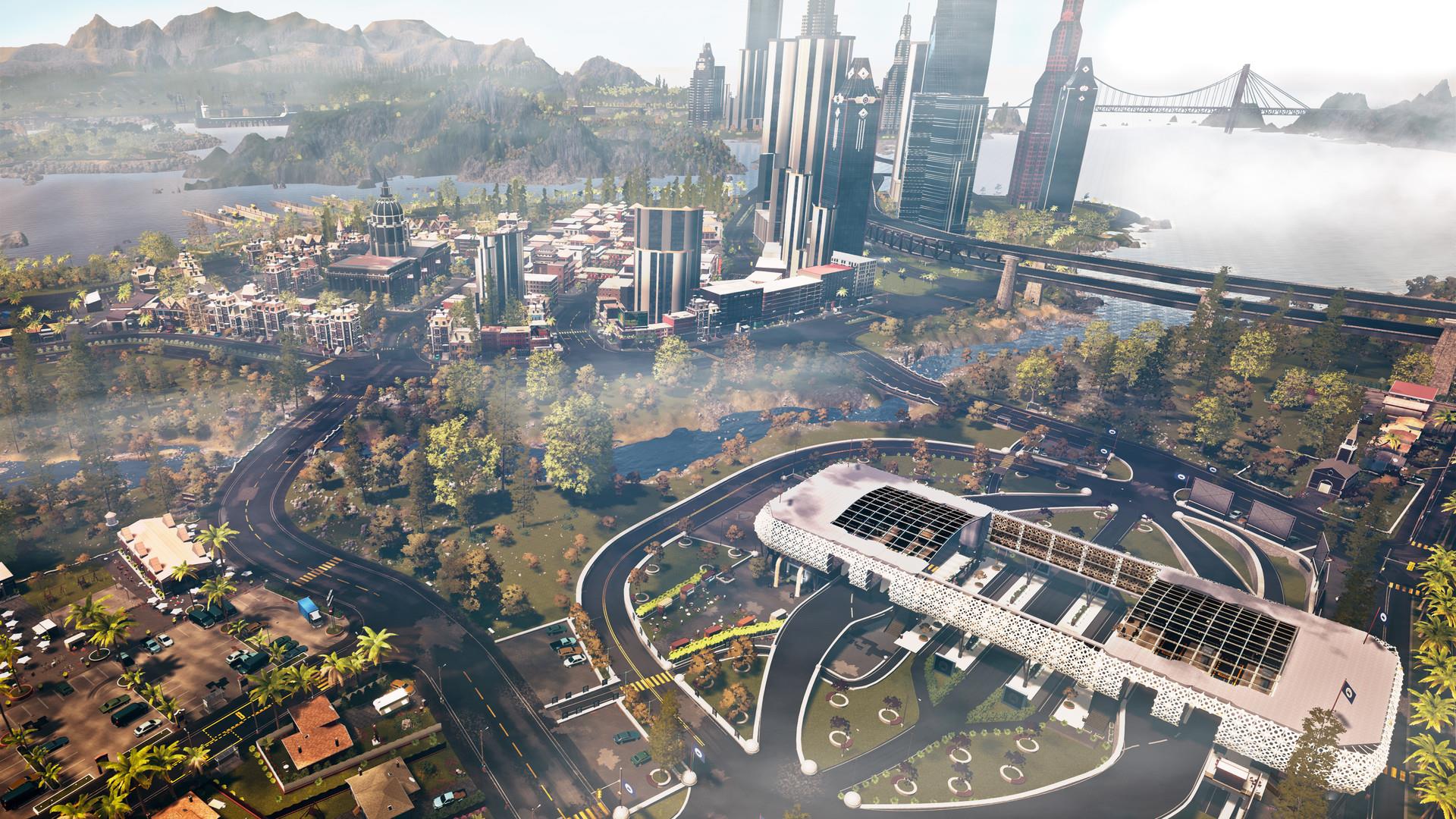 At times I found Mira to be less than helpful. She would tell me what we needed to do next, and sometimes I was able to do so without much problem. Other times it was downright frustrating. An example of this was a few hours in and I needed to take the new bus the city had gifted me, then put it on a route and drive that route. Well I did just that, but that didn’t complete my task. What she really wanted was for me to go into the route tab, and place the bus on the schedule, and then drive that bus through the route. At times the game will hold your hand through some of the confusing menus, which I loved. When it showed me once, I was usually fine to do it myself afterwards. But at times like this I had no idea what’s exactly needed to complete the task, and found myself angry and Mira. After all, she works for me. I should be giving her the directions, not the other way around. I had a few more instances of this happening, but they were few and far between thankfully.

Bus Simulator boasts about 30 licensed real world busses to choose from, and they mean every word of it. Every bus I chose handled a bit differently from the last one. I found myself going for style over substance when it came to selecting each purchase for my fleet. I wanted the cool-looking ones before I wanted the ones with the “better” stats. Turn radius, fuel, passenger size—all of those statistics play a part in how you can choose to select which bus to add. But I threw  caution to the wind, deciding to purchase the awesome-looking double decker bus the moment I was able to. And it was totally worth it, mostly. The third-person camera angle wasn't the best with that monster of a bus. But by that time I was so used to the controls that it only bothered me on my initial voyage. 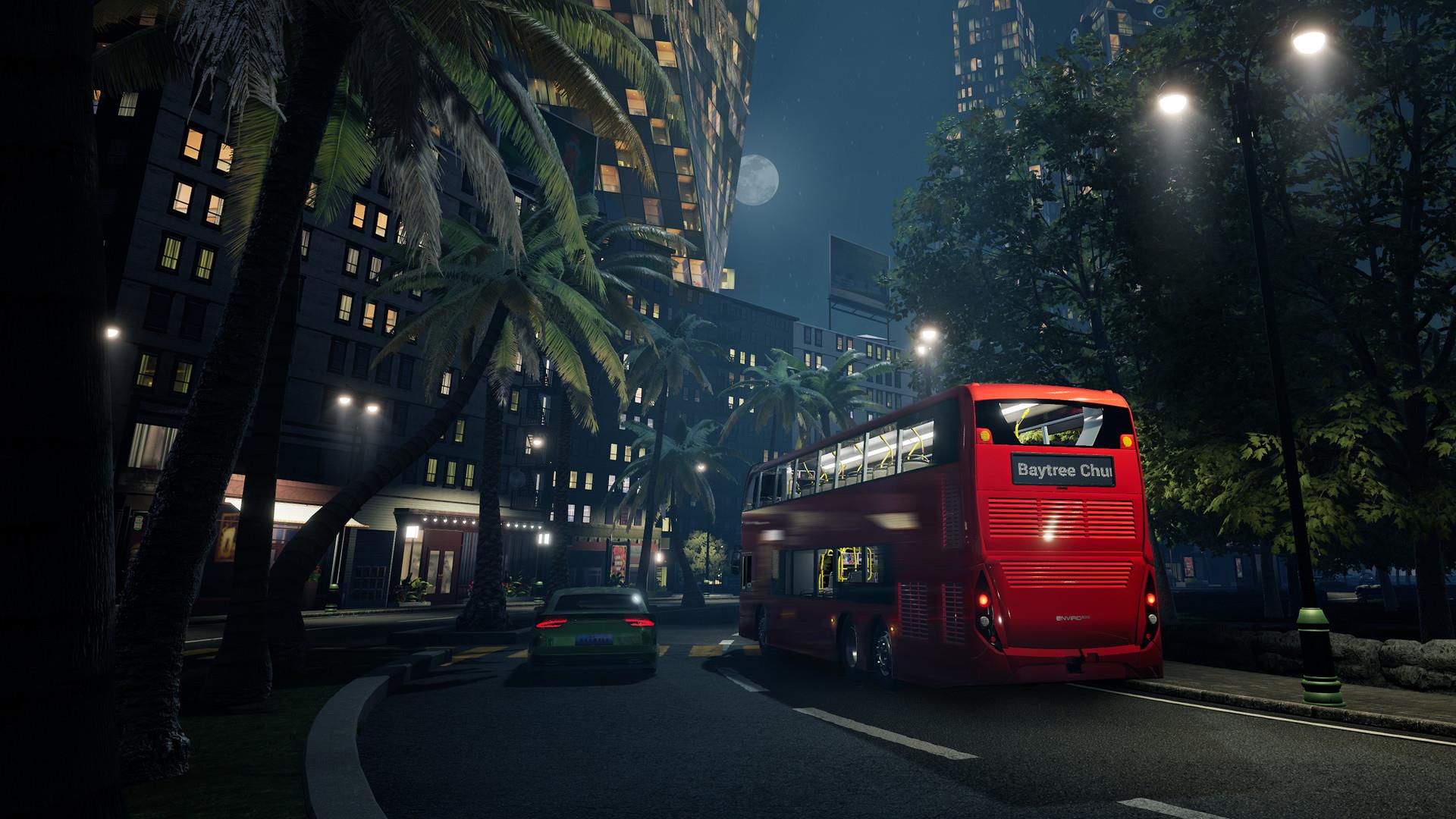 When talking about a simulation style game I feel that controls and realism play a huge part in how much I can enjoy it. The way they implemented the controls works well. Being able to choose your level of realism helped me a ton. I personally don’t mind having to take tickets from passengers, or get up from my driver’s seat to yell at some kid playing his music too loud. But if you don’t want to deal with those aspects, then you don’t have to, and you can simply turn off that style of gameplay and worry strictly about driving.

Choosing your level of involvement helps make this a game that I can play—but also someone like my wife, who doesn’t traditionally play video games. After watching me play for a few hours she wanted to give it a try herself. The bus controls took some getting used to. I would go back and forth playing between the keyboard and a controller, finding that it was easier to maneuver through tough situations on a keyboard. But I enjoyed having action buttons, like opening the doors, setting the parking brake, or using the turn signals on a controller instead of on the number pad. 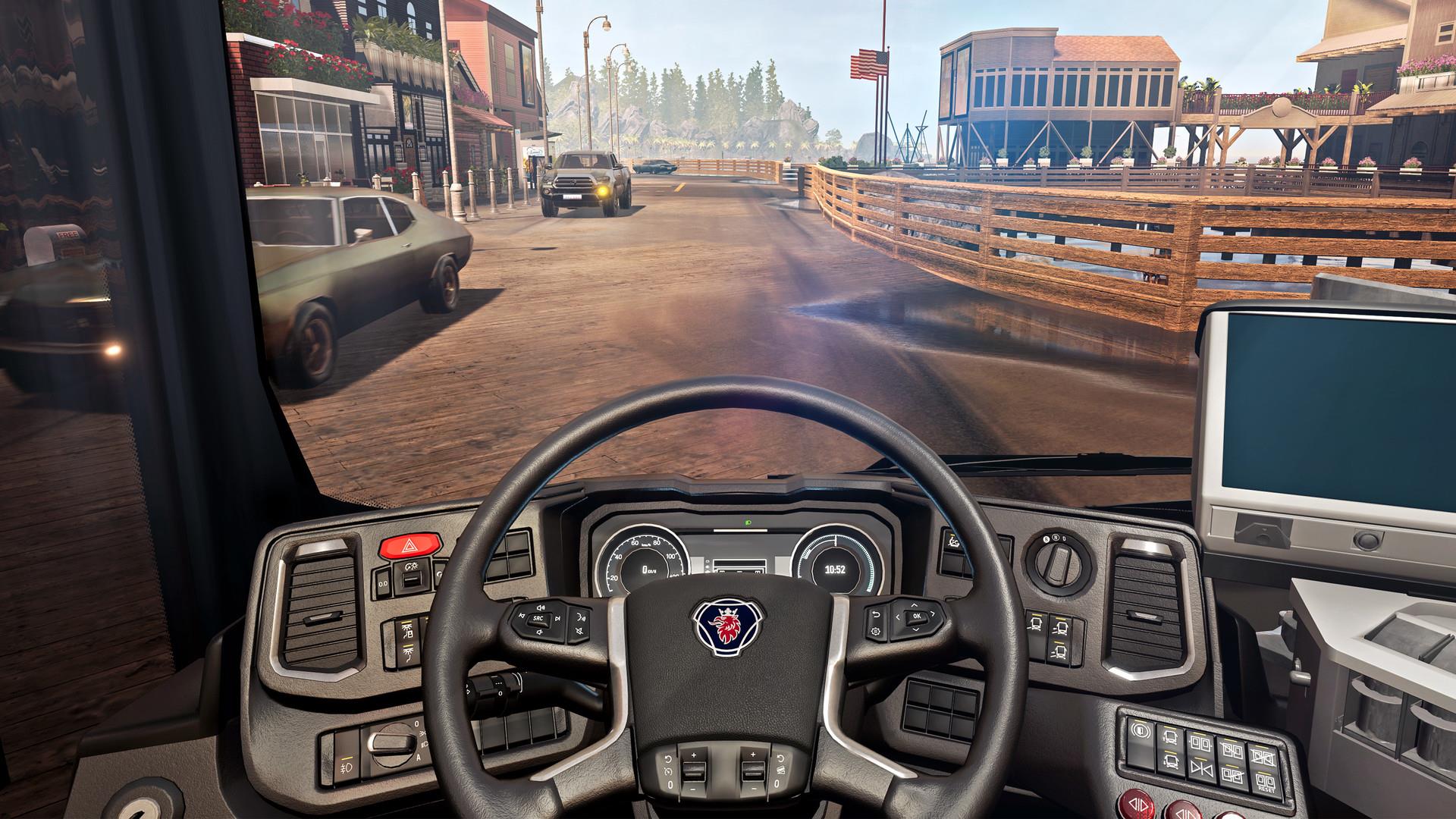 I don’t need Bus Simulator 21 to be 100% realistic. In fact, I don’t want that at all. I haven’t ridden on a public transit bus since my college days, which is definitely not something that I miss. There’s no need to get into the details of it, but I’m sure most of us have a strange bus story or two we could tell. Bus Simulator lets me choose how far down the rabbit hole I want to go. Heck, if I get bored of the route I’m on, I can go into the menu and just switch to a different route instantly, taking the bus I’m driving with me, or just driving the one that’s already on that route. Thankfully there are no real repercussions of just dropping that route and doing something else.

The world of Bus Simulator 21 feels alive and dead inside, all at the same time. The most frustrating part of it came from the AI of the vehicles around me. For 10 years at my real world big boy job I was a driving instructor. Because of that, I find it hard to turn off the instructor that still lives inside me, in the real world, or in Angel Shores. Vehicles in the game do whatever they want. Vehicles always stopped at a red light, but sometimes they would stop at a green one as well. Instead of yielding to the correct lane or direction of traffic people would cut you off when I knew I was in the right of way. There’s also no lane changing by anyone other than yourself, which is just insane to me. I guess you could make the argument that people are like that in the real world, but I don’t think this was what the developer was going for in the game. 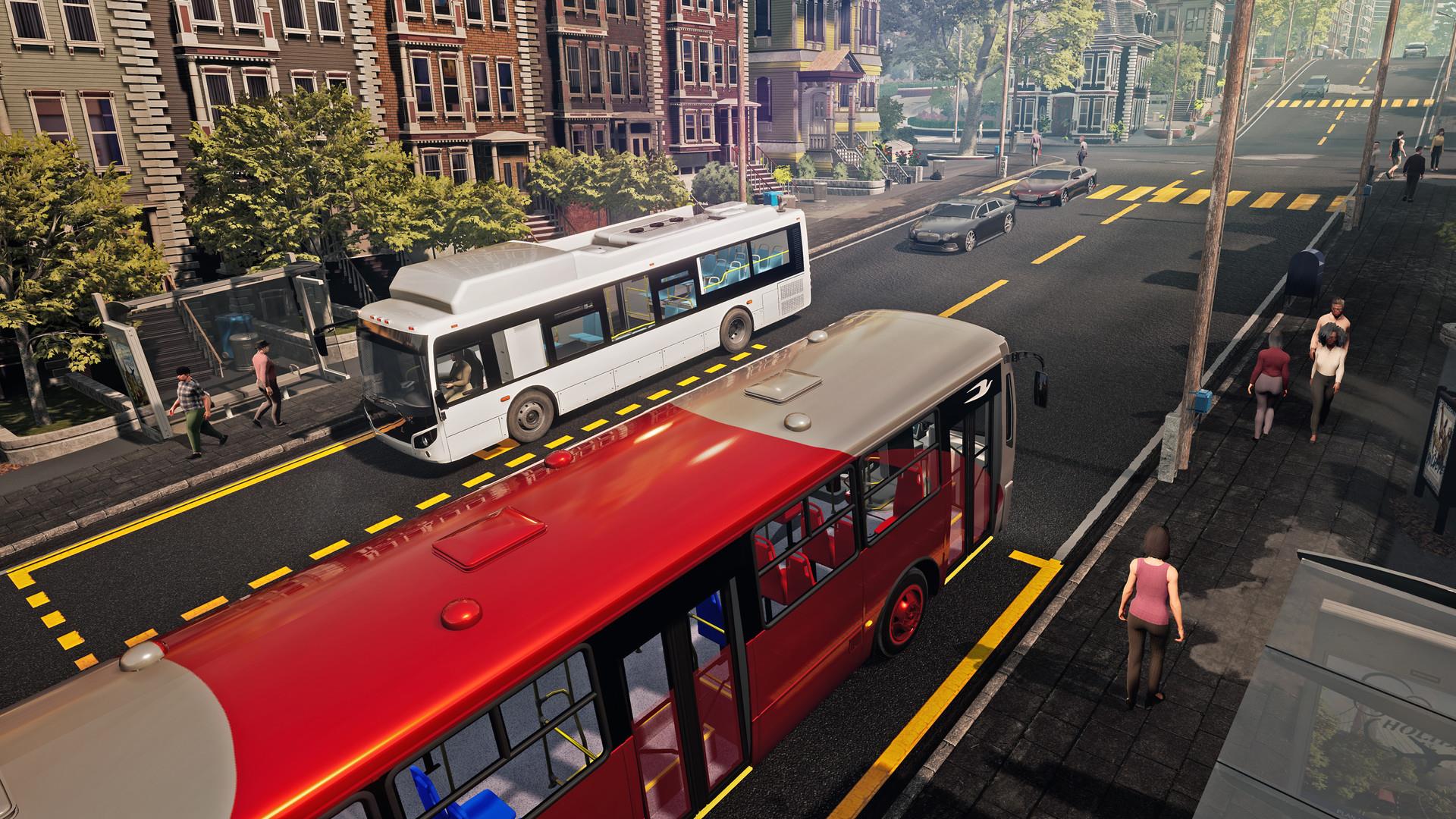 The same can be said about the pedestrians. They would always cross in a crosswalk, but they would do it whenever they felt like it. Anytime I would hit a pedestrian it was always because they jumped in front of me, or they were just stopped in the middle for no reason. The NPCs that would sit in your bus would spout random nonsense every minute or so, in an attempt to bring realism to the game. But after a few hours I had heard all of the dialogue, and I could care less about the frequent cat jokes, or how angry some of the NPCs would get when you didn't lower the  wheelchair ramp fast enough for them. One item I did enjoy was the switching of the day and night cycles of the game, which added an enjoyable element, along with the change in weather.

When I first started my time with Bus Simulator 21 I was expecting a mellow ride. At first I did not find that. I never felt overloaded with too much information to learn, but it was not relaxing. But after a few hours, you learn the moves, the routes, how to stop without having to hit the emergency brake, and Bus Simulator is just a relaxing drive. It never feels like work. In fact I would look forward to opening up a new part of the city to drive in, and was excited to try something different. I enjoyed my time in Angel Shores, and look forward to trying out other simulation style games when something catches my eye.

Bus Simulator 21 is for everyone. Being able to cater to your playstyle from the most basic of set ups to as realistic as they can make it, the game gets its hooks in you after a few hours. I always wanted to run one more route before getting up from a play session. The vehicle AI leaves something to be desired, but we can all think of a few drivers that give us road rage.