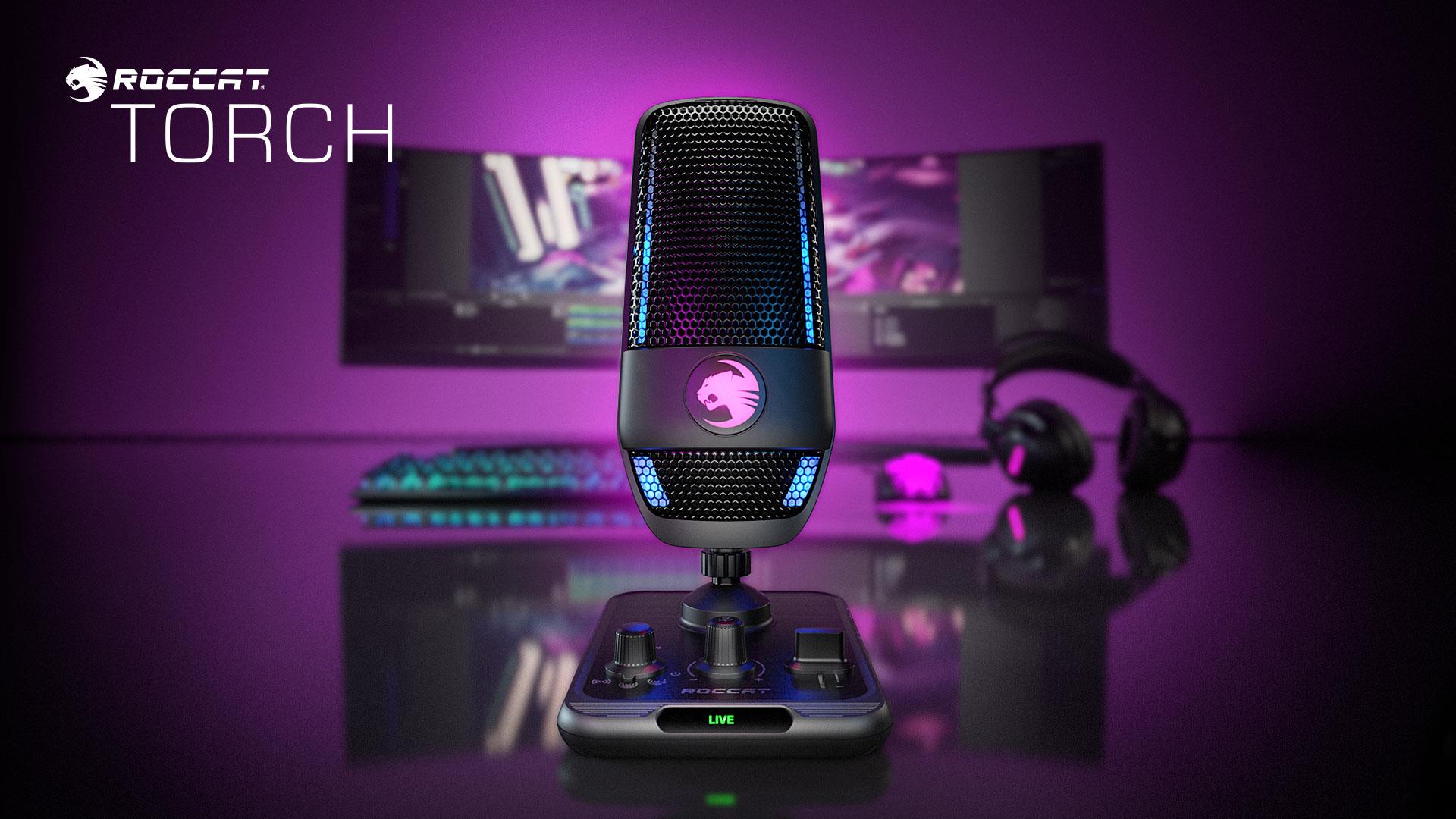 Written by Eric Hauter on 8/28/2021 for PC
More On: ROCCAT Torch Microphone

The ROCCAT Torch Microphone is perhaps one of the most exciting products I’ve reviewed this year. For the average gamer, it might seem a little strange for me to get excited over a microphone. Most folks simply rely on whatever mic is built into their headset to communicate with friends while gaming. But as someone that has recently doubled down on content creation, having a good mic is necessity.

I already have a pretty nice microphone in my possession. The problem is, it’s freakin’ huge. Sitting on my desk, my previous microphone obscures half of my face while talking on Zoom meetings and recording podcasts. There was absolutely no way I was going to be able to use it while recording gameplay videos; it is so big that it blocks the screen and I can’t see what I’m doing. The entire rig is just entirely too bulky. 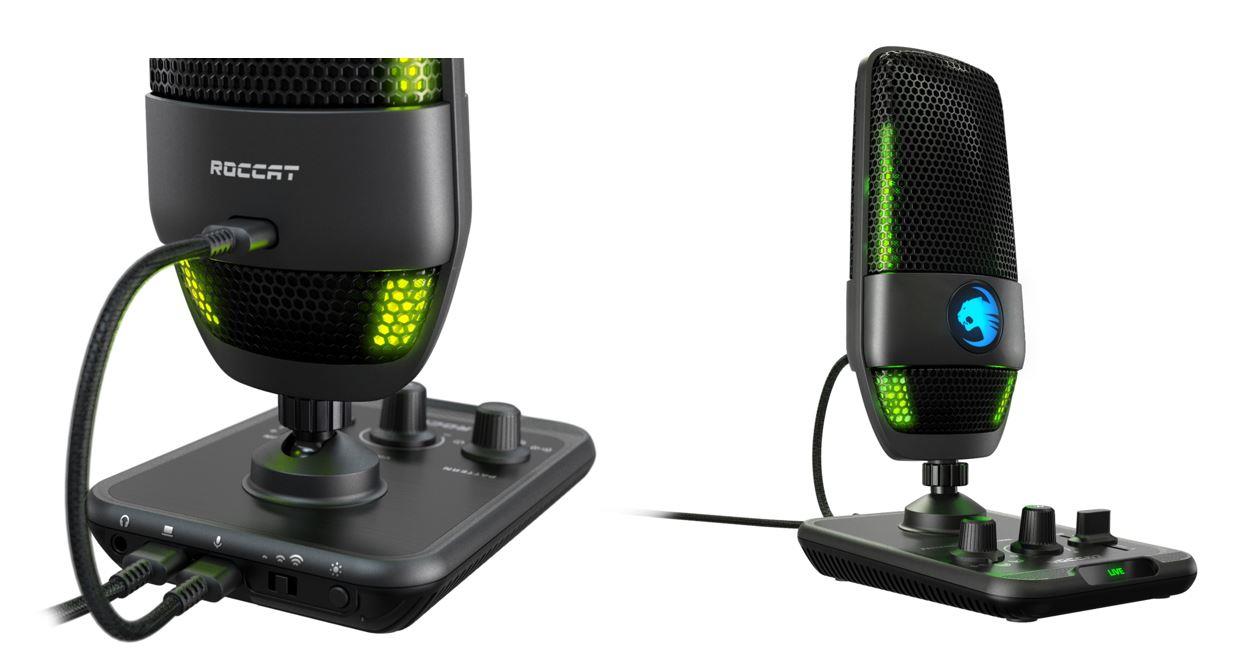 Size is initially what drew me to the ROCCAT Torch Microphone. Sitting on its detachable base, the Torch Mic rises about eight inches from my desk, meaning that it can’t even be seen from the vantage point of my camera. Slick, tidy, and attractive, the ROCCAT Torch Mic does its job without calling a bunch of attention to itself, which is just what I needed.

The base of the Torch Mic has a few built in controls, meaning that the user doesn’t need to install any software to adjust settings. The Torch is entirely plug-and-play; simply stick the USB cord into your PC and you are ready to rock. Setting the mic up and getting started takes about 40 seconds, meaning that you can go from unboxing to streaming in about a minute. 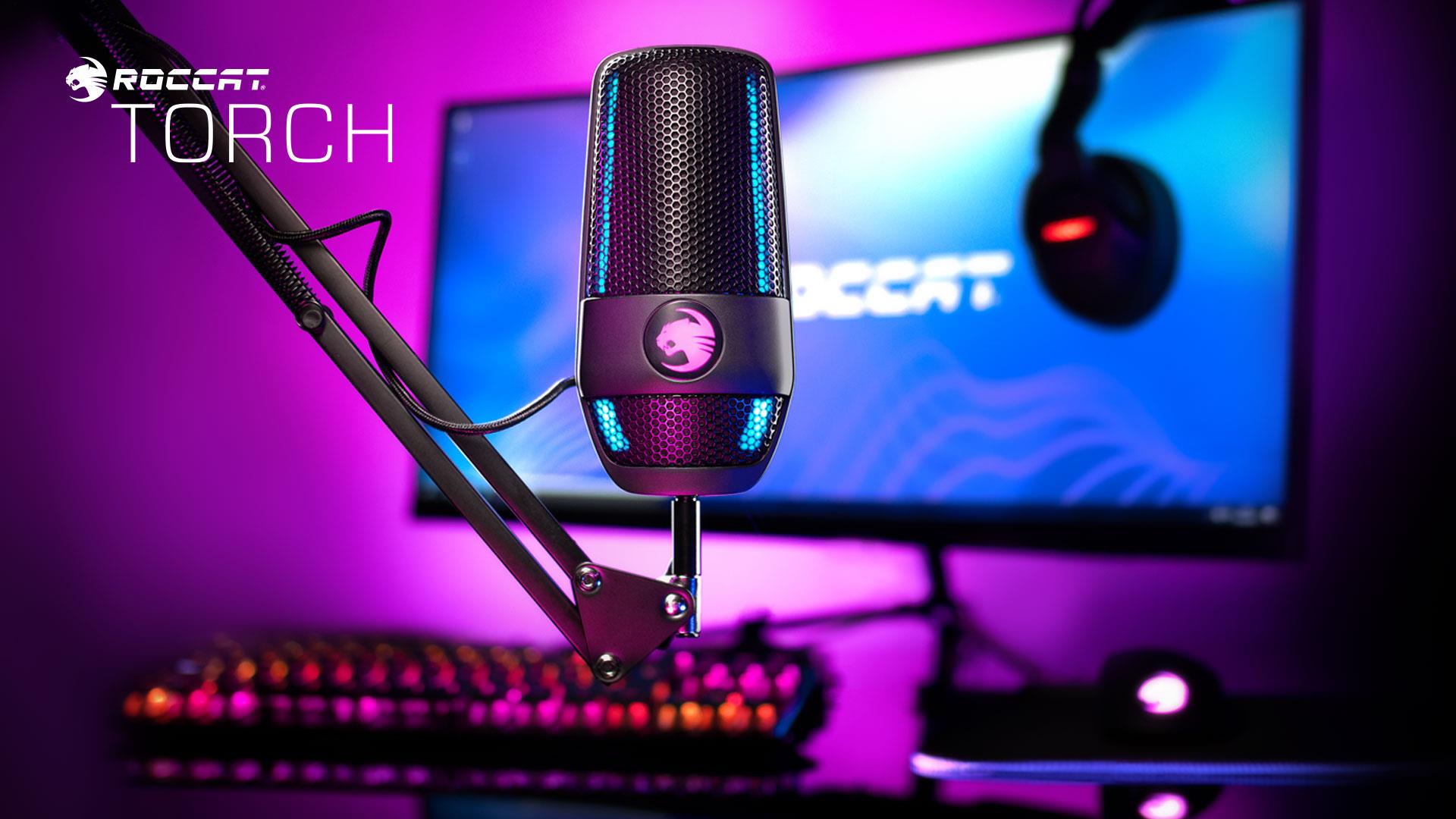 On the base is a switch to power on the Torch Mic and toggle between three built-in modes. Cardioid mode is a general catch-all mode, which is primarily what I stuck with. This keeps the pickup in the front of the mic, which helps cut back on environmental noise – of dire importance to people like me who are sharing their house with a few little kids and their wife’s hair dryer. There is also a Stereo Mode (activates the pickup on the back of the mic) and a Whisper mode, which cranks the gain on the front of the mic, and lets users talk very softly with the assurance that their voice will still be heard. Each of these modes has a corresponding LED color that the mic displays when you switch to them, allowing you to quickly see which mode you’ve selected if you are fumbling around with a controller or mouse.

Also on the base: a gain lever, which lets users adjust the gain without having to mess around with their software settings, and a volume knob controls the volume going out to an external set of headphones, which can be plugged into the back of the base for monitoring. The gain lever is directly tied to the LED lights on the side of the mic, which grow and shrink in correspondence with the gain level. The effect is super slick; something that ROCCAT didn’t have to throw in, but likely did include just because it is fun. I did find that it is best to set the gain level and leave it alone, as moving it on the fly does lead to some crackling being picked up in your recording.

The base itself is as diminutive as the mic, maybe seven inches by five, and less than an inch thick. This gives the Torch Mic a portability and modularity that is pretty tough to beat in its $99 price range. Though the base is small, it is solid feeling enough that the mic isn’t going to topple over if the desk gets jostled. The mic attaches to the base easily, sitting atop a ball joint that lets the user swivel it around however they see fit. For the most part, I just plunked it down on my desk, sorta aimed it at my face, and then totally forgot about it. This advanced methodology worked just fine.

The mic is wired into the base via a USB C-to-C cord, which means that you can easily detach the mic from the base if you have a preferred boom you would rather use. Of course, this would mean that you would lose the fun little base features, but I imagine that some folks already have a setup they would like to use instead.

As far as sound-quality goes, the Torch Mic does pretty well for itself. I did notice that my voice sounded a bit “boxy” in a recent podcast I recorded, compared to the richness and clarity I usually get from my crazy expensive and hulking mic setup. My voice sounded slightly empty, though this was nothing I would have noticed had I not been comparing the performance of these mics side by side.

For comparison (for those that really want to dig in on this issue), the following is a quick snippet I recorded using my regular mic with no filters or digital enhancement:

Then this is a snippet that I recorded with the ROCCAT Torch Mic, also with no filters or digital enhancement:

And finally, just for fun, a snippet I recorded with the mic on my Bluetooth headset (no enhancement, etc):

I used the exact same software and settings for the above recordings, literally just plugging the mics in one after the other and clicking the record button. As you can see, the ROCCAT Torch Mic sounds pretty good for a $99 product that I just pulled out of the box and plopped down on my desk. With a bit of electronic manipulation, I could probably get it to sound as good as my standard mic. The other bonus of the ROCCAT Torch is that I don’t have to get right up on it to be clearly heard. I can comfortably sit back in my chair with the assurance that the Torch Mic will be picking up every little sound I make.

I’m delighted with the performance and economy of design on display with the ROCCAT Torch Microphone. My desk space is at a premium, and the slight trade-off in sound quality is absolutely justified by the reduction in desk clutter. For folks just getting into streaming or podcasting, this is a great entry level mic that will probably earn a permanent place on your desk.

With snazzy good looks and very solid performance, the ROCCAT Torch Mic gives a lot of bang for your buck, while not overwhelming your entire set up. Smart, tight plug-and-play design coupled with a bunch of features that are typically relegated to more expensive price points makes the ROCCAT Torch Mic an great value for those looking to step up their audio game.