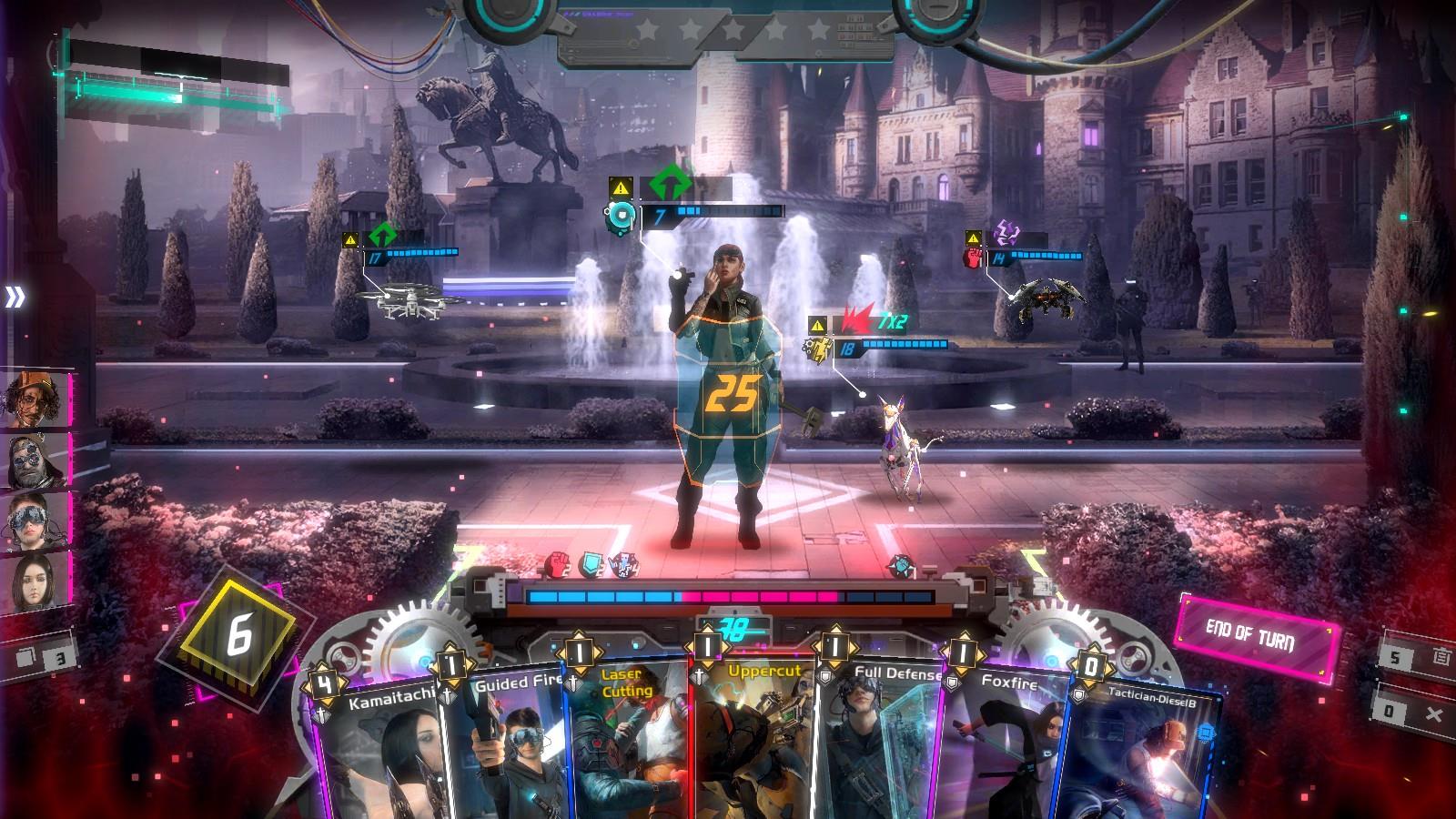 As much as I’ve played several physical deck building games, I’ve never played any digital ones outside of just digital versions of physical games like Ascension or Star Realms. Considering how many are out there that’s kind of surprising, though I’m slowly starting to get my feet wet. That being said, when the opportunity to check out Shadowplay: Metropolis Foe came up I decided to take a crack at it and see if my physical deck building game skills can translate into the digital world.

If you’ve never played a digital deck building game, Shadowplay: Metropolis Foe doesn’t quite play like physical DBGs, which makes sense since games like Shadowplay have a narrative unfolding as the game progresses. The game takes place in the metropolis of Star City, a place full of danger and adventure. A place that never sleeps and could care less if you live or die. A place where your every decision can alter the course of the game for better or for worse. That’s the gist of the game as read on the game’s Steam page, and boy they weren’t kidding because quite a few decisions can actually hinder you before you even get to a fight. 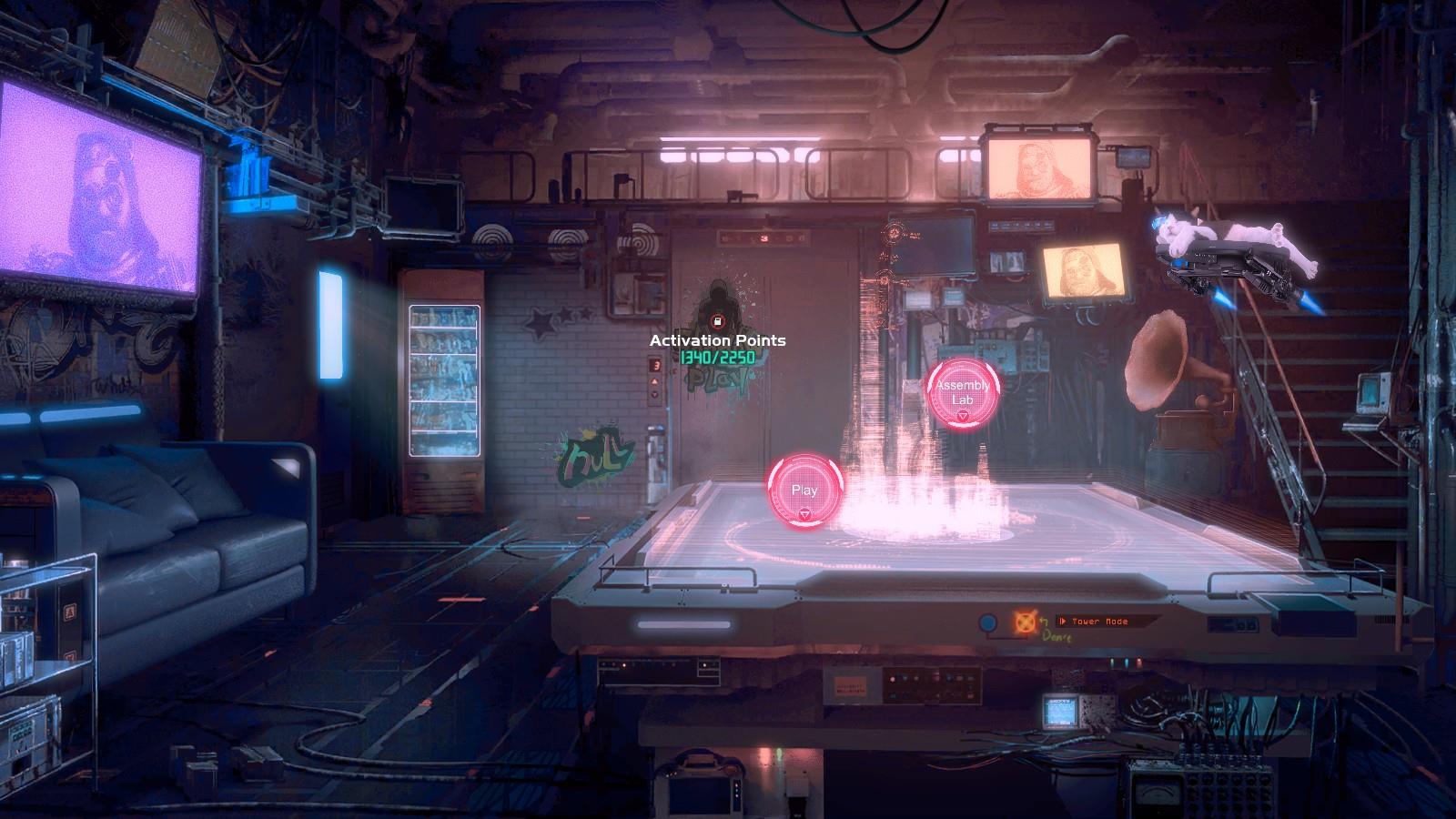 Once you get through the tutorial you have four characters you can take into a scenario. Each has their own special traits and equipment to help you in fights, while the other three characters help out by lending you their cards. As you complete more stages, more characters become available to take into stages with you. You can utilize their cards as well, but you can only take in four characters regardless of how many you have unlocked.

Each character has their own playstyle when it comes to their cards, such as heavy hitting, building up your armor, corroding (or tainting, as the game calls it) your enemies so they take damage every turn, and so on. Each character can also have a couple of pieces of equipment on hand to give certain effects at the start of, or during, a battle. You can even have the game auto-setup your group after choosing your leader. Basically who you pick all comes down to how you prefer to play. 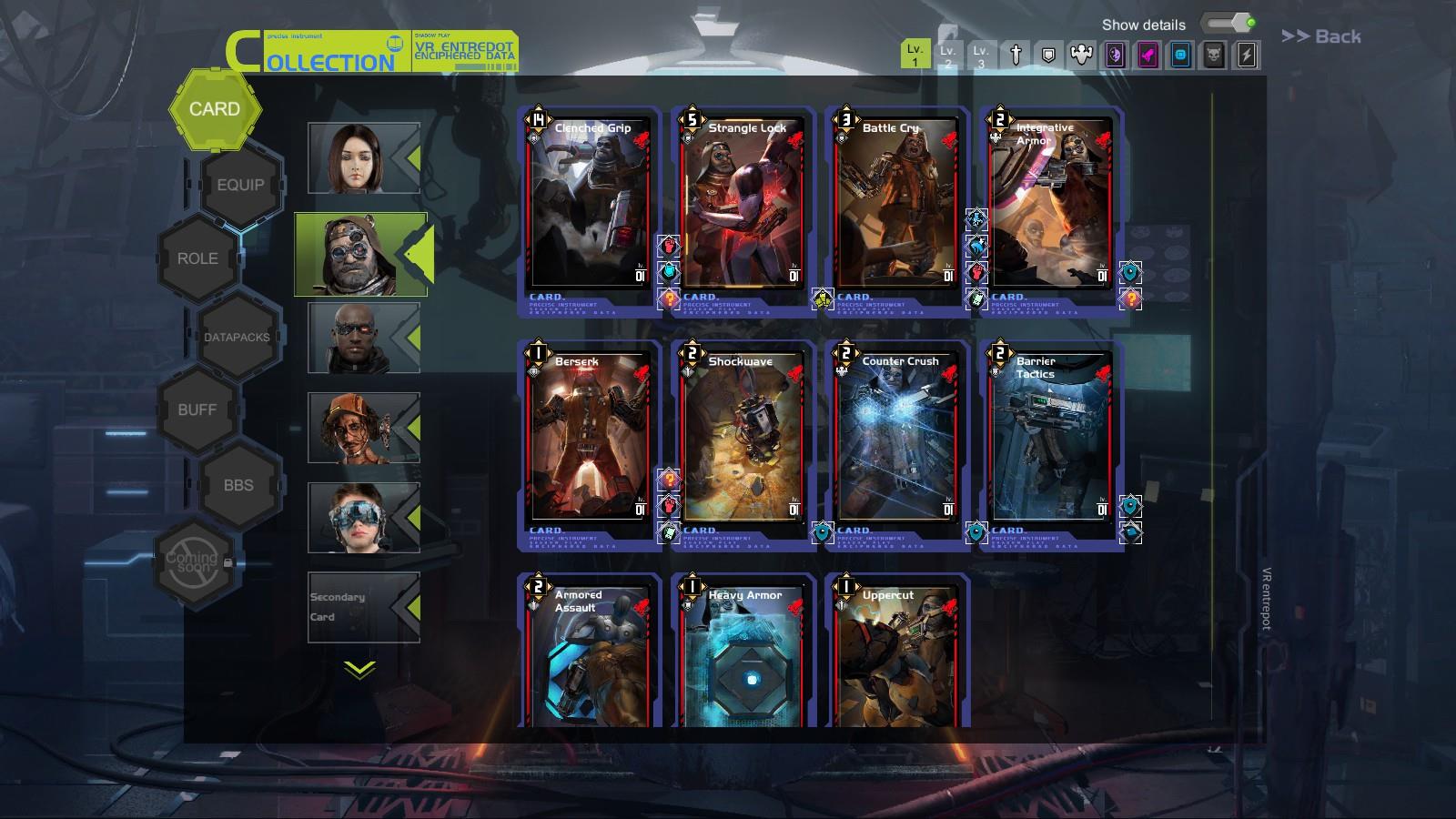 The card battling isn’t too complicated at first. The tutorial walks you through the basics. Each turn you start with an amount of energy equal to the number of teammates you have with you, usually four, and a starting hand of six cards. Each card has an energy cost and an effect such as dealing damage, giving you armor, or giving you various buffs and your opponent debuffs. Other effects include the aforementioned tainting your opponent so they take damage at the start of each turn, healing yourself between turns, and giving you a chance to evade your opponent’s attacks entirely.

There are a lot of effects and the tutorial doesn’t give you much to go on. However, prior to going into a stage when you’re in your “hideout” you can view your collection of cards, equipment, and even a list of buffs and debuffs in the game. Definitely familiarize yourself with these, but you can also hover over their icons in battle to view what they do.

Once you’ve played any cards you wish to play or can play, you’ll end your turn and any energy remaining goes to zero. Then your opponent will act. Thankfully you aren’t going into your opponent’s turn blind, as you can see what each opponent will do by an icon above their head, including if they’ll attack. Any incoming attacks are notated by a red attack icon and how much damage they’ll deal. A lot of their attacks are actually split between multiple shots such as 11x2. While this may not seem like a big deal, given the buff that gives you the chance to evade an attack this means that you could evade the first 11 damage but take the second 11. If you have any armor when your opponent attacks and the attack hits, the damage comes off of the armor first and then your hit points. You begin each chapter with 100 HP and you can increase and decrease this amount throughout the chapter.

However, I did say that some decisions can hinder your progress through a chapter. Each stage has three chapters and the goal is to move around on the map completing storyline elements and battles to get to a Terminal and defeat the boss. If you take too long a particular part of the map will have a red dome and will begin to get taken over. If it reaches 100% (it goes up by 20% each turn) then it becomes a red zone and nearly every space in that zone becomes a really difficult battle where the enemies can easily one shot you from full health unless you’re packing a ton of armor cards. So, your best bet is to basically book it to the terminal. 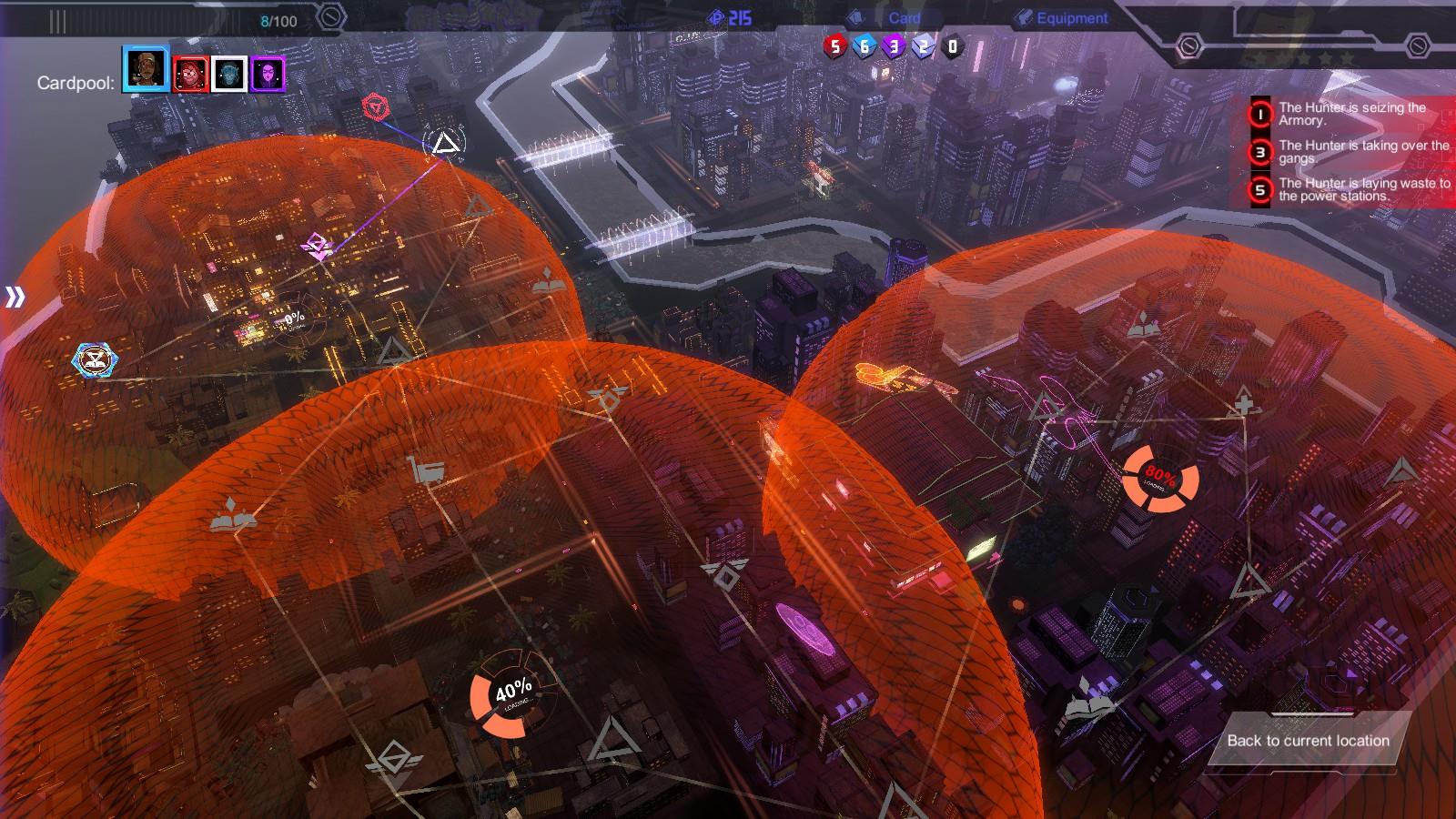 Along the way you’ll come across stores to purchase equipment and cards as well as medical areas to restore some HP and empower cards, both which cost credits (the first 20% of health restoration at each station is free). You also have your battles and elite battles where you can earn credits, cards, and equipment if you win, but then you have the story elements which is probably where most of my frustrations with this game come into play.

When you activate a Story space on the map you’re given a scenario and will typically have two or three options to choose from. Most of the time you can hover over your options and they’ll tell you exactly what they do. Other times picking an option will lead to another choice. More often than not I’m perfectly okay with this as part of the strategy of choosing your options carefully. Should you buy a new card at the shop or pay to remove ones you don’t think you’ll need or don’t compliment your current strategy. Do you want to roll the dice and take a chance on some new equipment or maybe empower a random card? 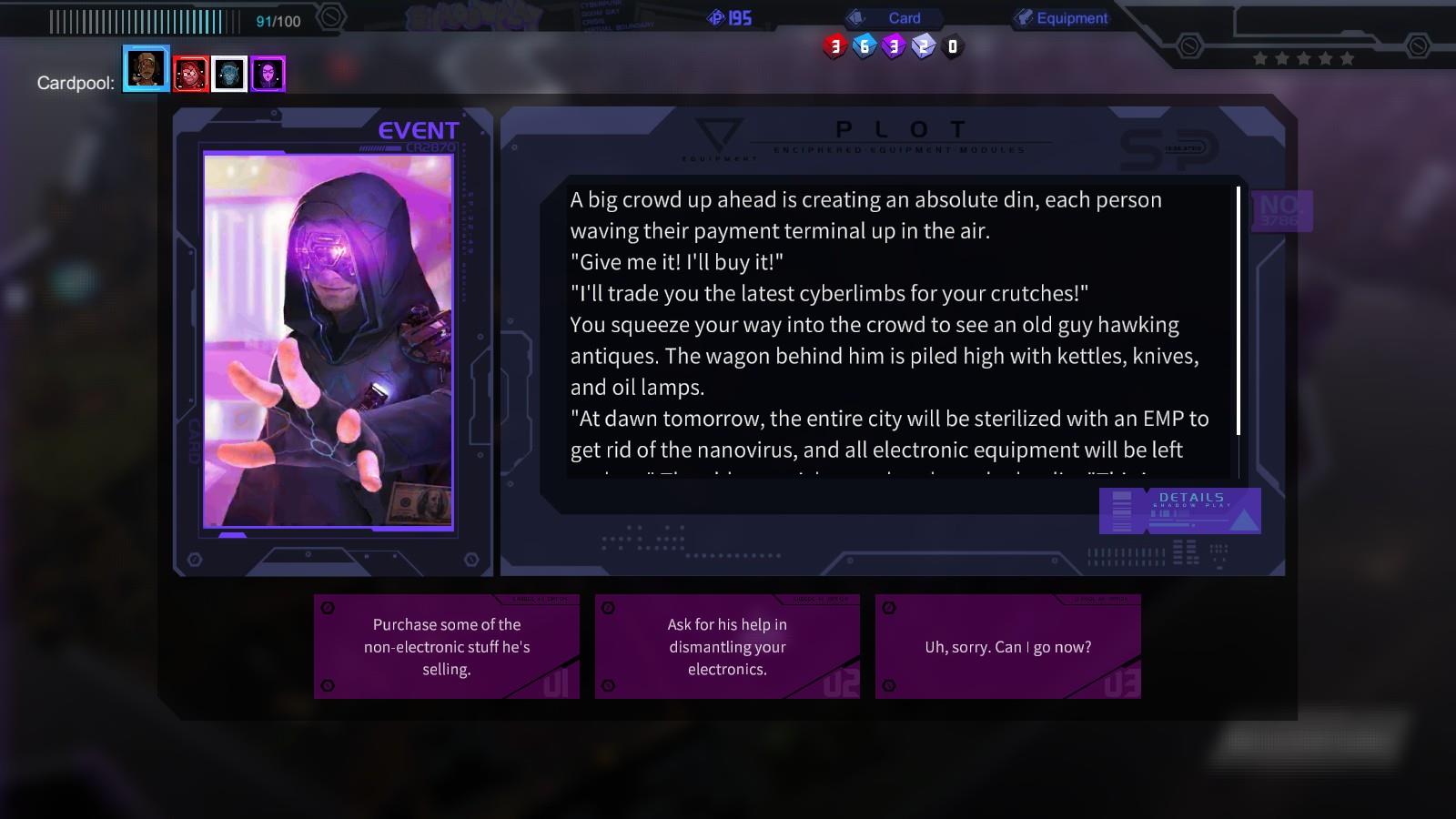 However, there are times where the penalties aren’t given before choosing your option. It could mean the difference between surviving the chapter or getting pummeled in the next battle. One type of mission is a Captain Mission where your captain talks to you and gives you a couple of options. One time, though, I didn’t have enough credits for one of the options and the other one lowered my max HP by 50—I had built it up to 130 so this put me at 80—and you can’t back out of these story spaces. You have to pick an option and live with any consequences it may bring.

While the game looks great and the card battling itself is fun and enjoyable for the most part, it did take a while for me to get to that point. Starting out I could barely compete a single chapter, let alone an entire stage due to how difficult some of the battles can be. Plus being a card game there’s a lot of luck of the draw. If you complete a stage you get a decent amount of points that goes towards unlocking new cards, equipment, stages, and characters. But even getting a game over when your HP reaches zero will net you some points depending on how well you did to that point. And while you retain some items, your deck goes back to what you started with for the most part. 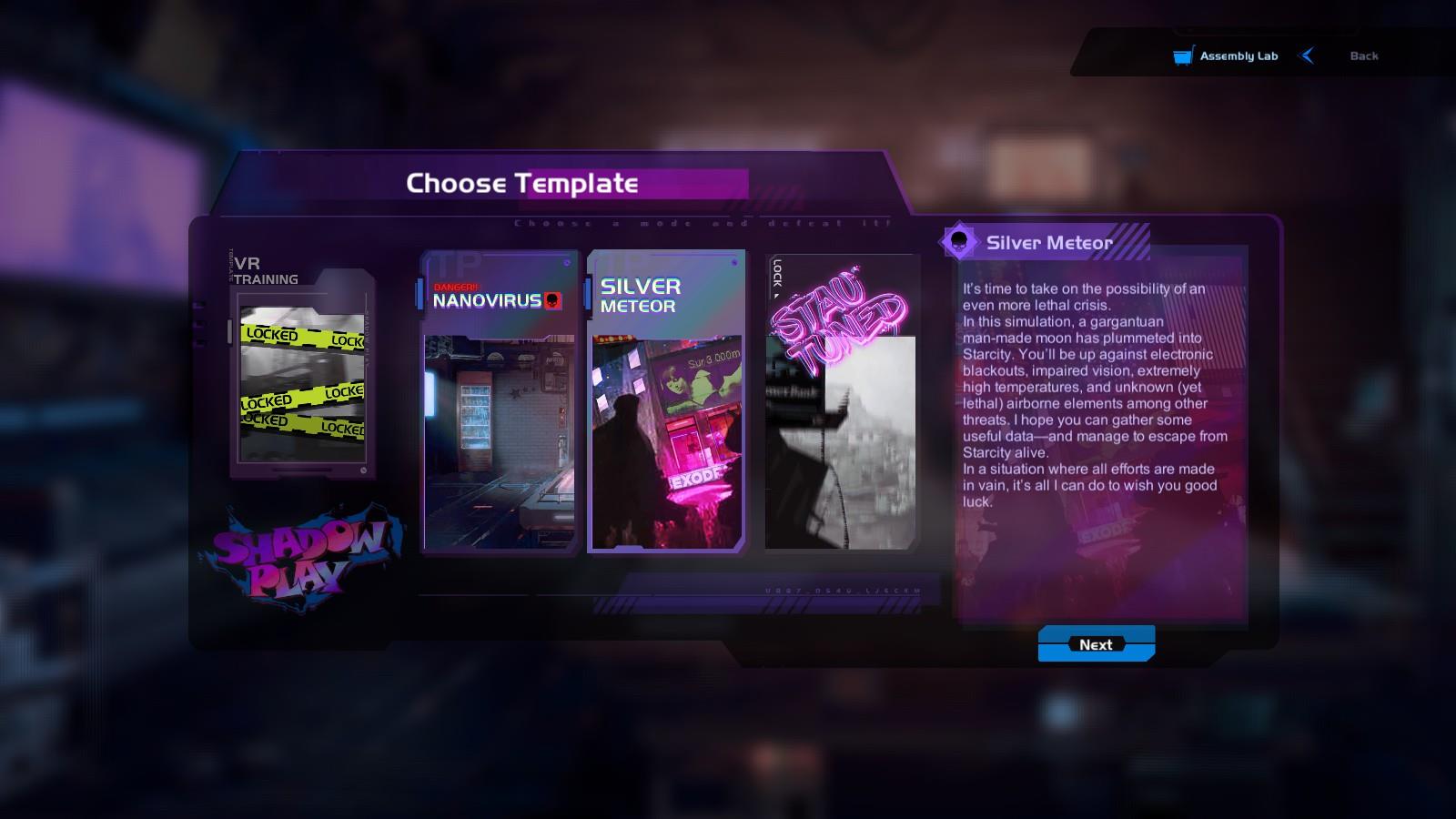 Eventually I unlocked a character who has a couple of cards that revolve around tainting an opponent and activating it right away. They immediately take damage depending on how many stacks they have. At one point I had a boss with over 100 stacks and he went down rather quickly. That is one thing this game has in common with other deck builders: you have to have a strategy going in or you will fail. Concentrate on one or two aspects from the cards you have, then build up credits to get more cards that’ll help you out or to get rid of cards that don't. A card may look fun to play but, just like in other deck builders and CCGs, I recommend focusing more on strategy than playing your favorite cards.

In the end, Shadowplay: Metropolis Foe can be enjoyable—as long as you approach it correctly. The game looks and sounds pretty good. The gameplay itself is definitely challenging. The challenge can be too great in the early going until you get more things unlocked. Once I began to actually focus more on choosing cards and equipment that complemented my strategy, and not just things that seemed awesome at the time, I began to make actual progress and enjoy the game more. That doesn’t mean the game becomes a cakewalk. It's still a decent challenge. If you’re new to deck builders I’d recommend checking out something along the lines of Ascension or Star Realms first to get your feet wet. When you’re ready for a bit more of a challenge that requires a lot more strategy, Shadowplay: Metropolis Foe will be waiting for you…and its price won’t even set you back that much.

Shadowplay: Metropolis Foe is interesting and challenging, but definitely not recommended for players new to deck building games. The amount of strategy needed to progress through even the early stages can be far greater than more basic deck builders such as Ascension and Star Realms. However, deck building veterans should already have the skills needed to properly build and maintain their deck as they play and can work with equipment that goes along with it. If you want a challenging deck-building game, Shadowplay: Metropolis Foe will give you that challenge.