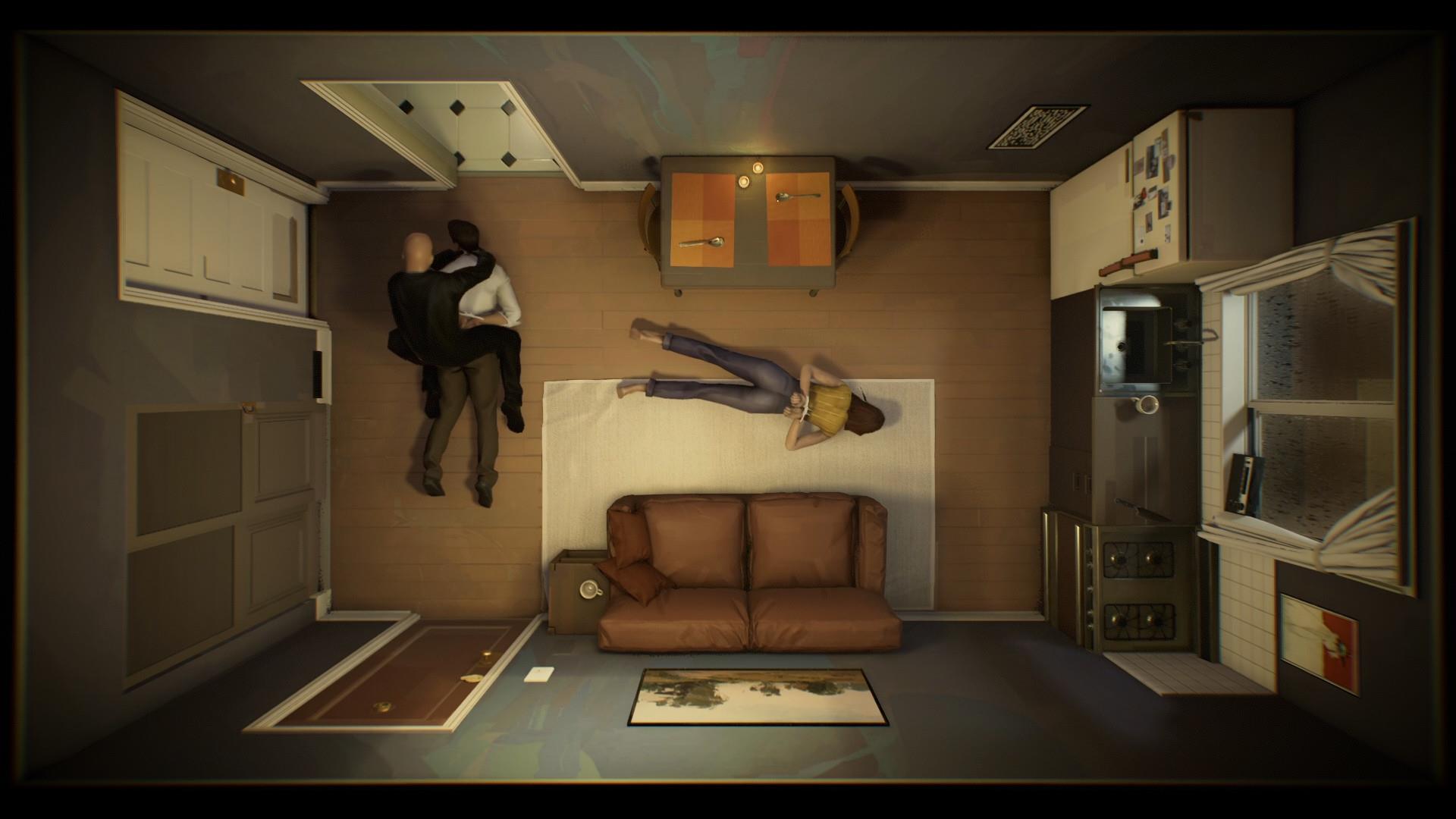 Groundhog Day was a movie about a person reliving one day over and over again. He learns new things during each time loop, some good, some bad. But in the end, he uses the knowledge he gained to better himself and break the loop.

Twelve Minutes is just like that in a tighter time frame—and with a story that takes a much different turn than Groundhog Day.

The game is pretty simple to play. Whether you’re using a controller or a mouse, you just move a white dot over to the space you want to move to, or an object you want to interact with, and click a button. And that’s it. You only need one button and either the mouse or controller. Want to use an object with another? Just drag said object on top of the other. Or drag it onto something in the environment. On PC, I found using a mouse a lot easier. Moving the dot with a controller was more of a chore. Especially when there’s a time limit. I’ll get to that in a bit. At certain stages of the game you want to be quick and decisive and it’s tougher to do so with a controller than it is with a mouse.

You control the unnamed protagonist as he comes home to his unnamed wife who has some wonderful news. The news is indeed wonderful, but things quickly take a turn for the worse when a cop shows up. The situation escalates quickly to a point where…well, the less you know the better.

The puzzles can range from easy to confusing, but most of them should be simple enough to figure out. Only one of the things really had me stumped and that was because of how hidden the area was on the screen. Sometimes you just have the move your cursor around and scan the screen to see where you need to click, and this was one of those times. With only a few places to look, it shouldn’t take too long, but there can be something here and there that can easily be missed because of the environmental design. 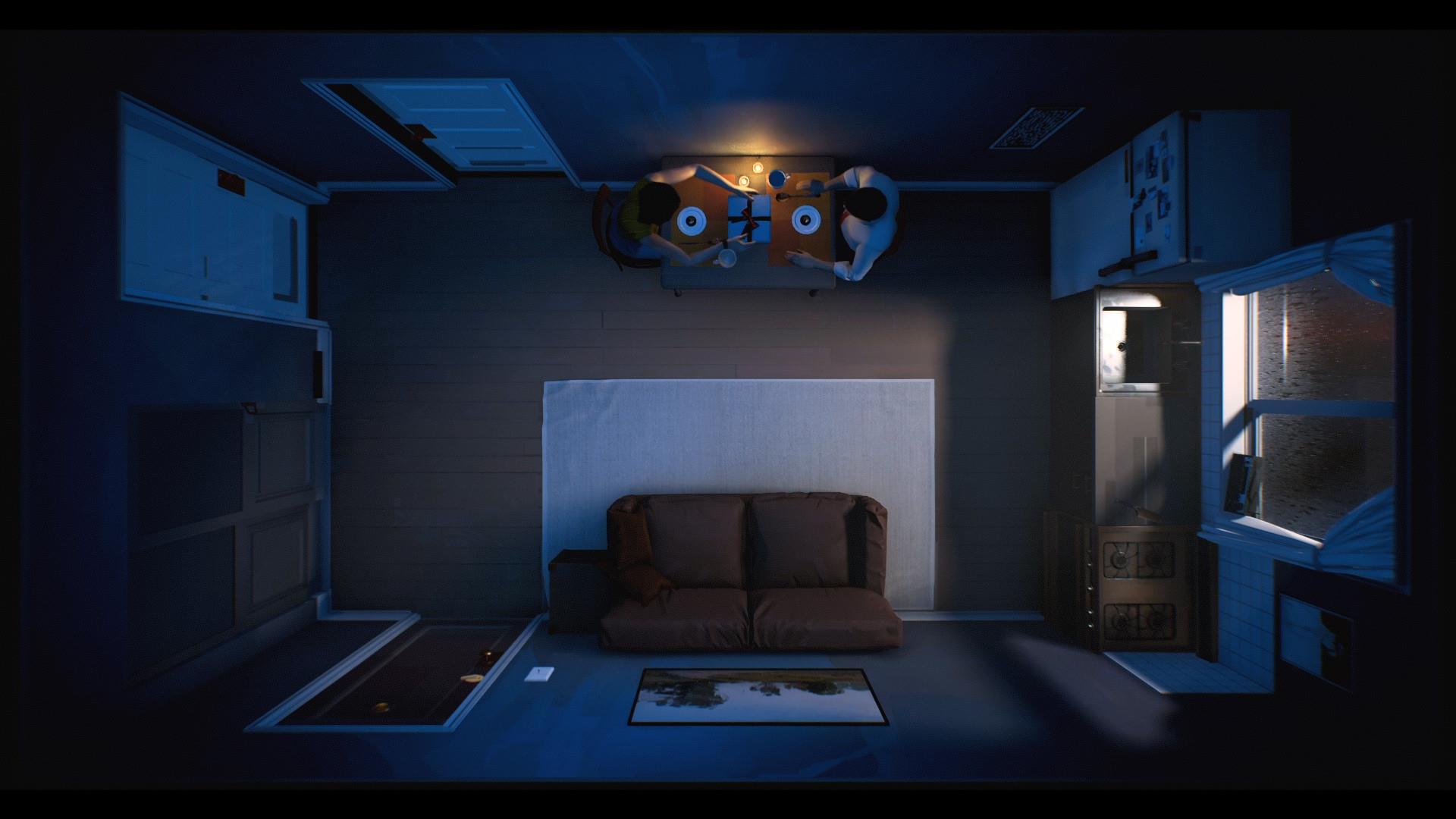 Another area that I got a little stuck in was new dialogue to advance the story that wasn't presented until I clicked on an object. Even though I took an action to pick it up, I wasn’t able to say something to the character until that occurred. So I replayed the loop a few times with similar decisions only to get the same outcome. It wasn’t until I decided to click on the object in my hand that the new dialogue was then presented in the situation. Normally, I was fine with it, but the characters did talk about this particular item in a prior loop so I didn’t think I had to do anything other than use it at the correct time. Frustrating yes, but that was the only time I found myself sitting there wondering why this item wasn’t helping the story progress.

You’ve got roughly 12 minutes or until you are incapacitated, whichever comes first, to get as much information as you can before the time loop resets you to when you enter your apartment. It also resets if you try to leave the apartment. But the new information you glean will open up more dialogue choices between you, your wife, and the cop. And that’s how you progress. Like Groundhog Day, you use the new information from the previous loop to find and do more things until you get to the end. 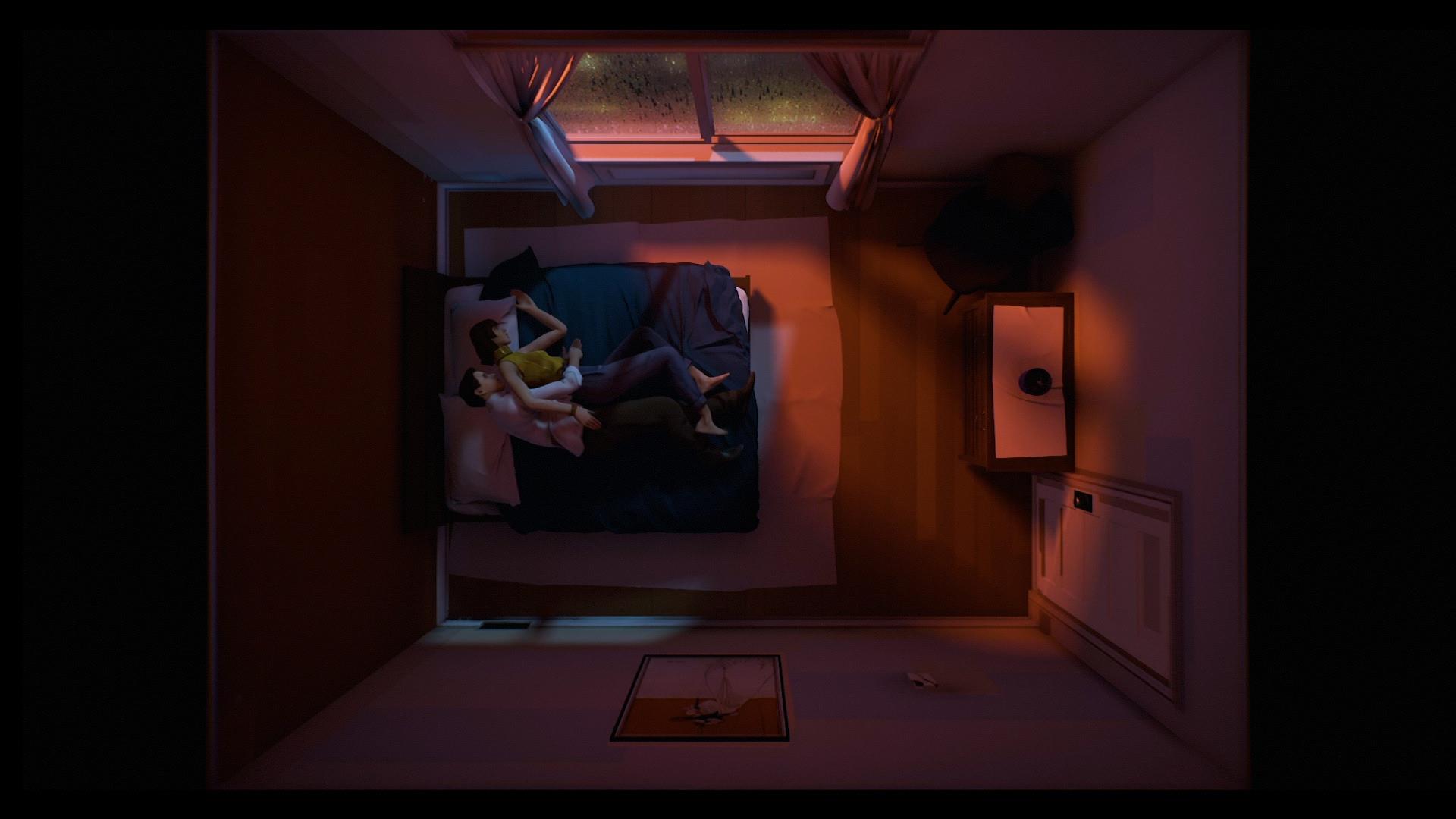 And that ending. Whew! There are a few games that leave me in shock at the end. Spec Ops: The Line is one that pops into my head all the time and one that I recommend to anyone wanting an experience that makes you think, react, and feel by the time it’s all over. Twelve Minutes comes close. Finding out everything left me in a state of shock that few games do.

There are also multiple endings to Twelve Minutes and it’s fun to see how the events could end based on your decisions. I got an ending, though, that was finite but took me all the way back to the beginning of the first loop, not allowing me to continue from where I left off in the final loop to see the other endings based on different choices. Hopefully, the developers will add a way for us to start the game at a certain point, but for now, there doesn’t seem to be a way to “save.” That doesn’t mean you lose your progress if you decide to quit. Once you reload the game, it starts off with the dialogue choices you have unlocked from previous plays. But it seems like if you get a certain ending for now, you don’t get to go back a few loops to change your decision to see the other endings.

Twelve Minutes also does it in a short time frame. I wasn’t perfect in my playthrough, of course, and it took me roughly two hours to complete. You can probably go from start to finish in as little as an hour, but I found the amount of time to be perfect so as to not be tedious or make me lose interest. Considering there are only three rooms in the apartment, two characters to interact with, as well as a few on a cell phone, I can see how people could get frustrated doing the same things over and over again if the game were any longer. Also, I can see people getting stuck in a few loops trying to figure out what they need to do to get that next piece of dialogue. You are working against the 12-minute time limit per loop, so sometimes you can feel rushed knowing you are about to start the scenario over again just as you figure out how to progress. 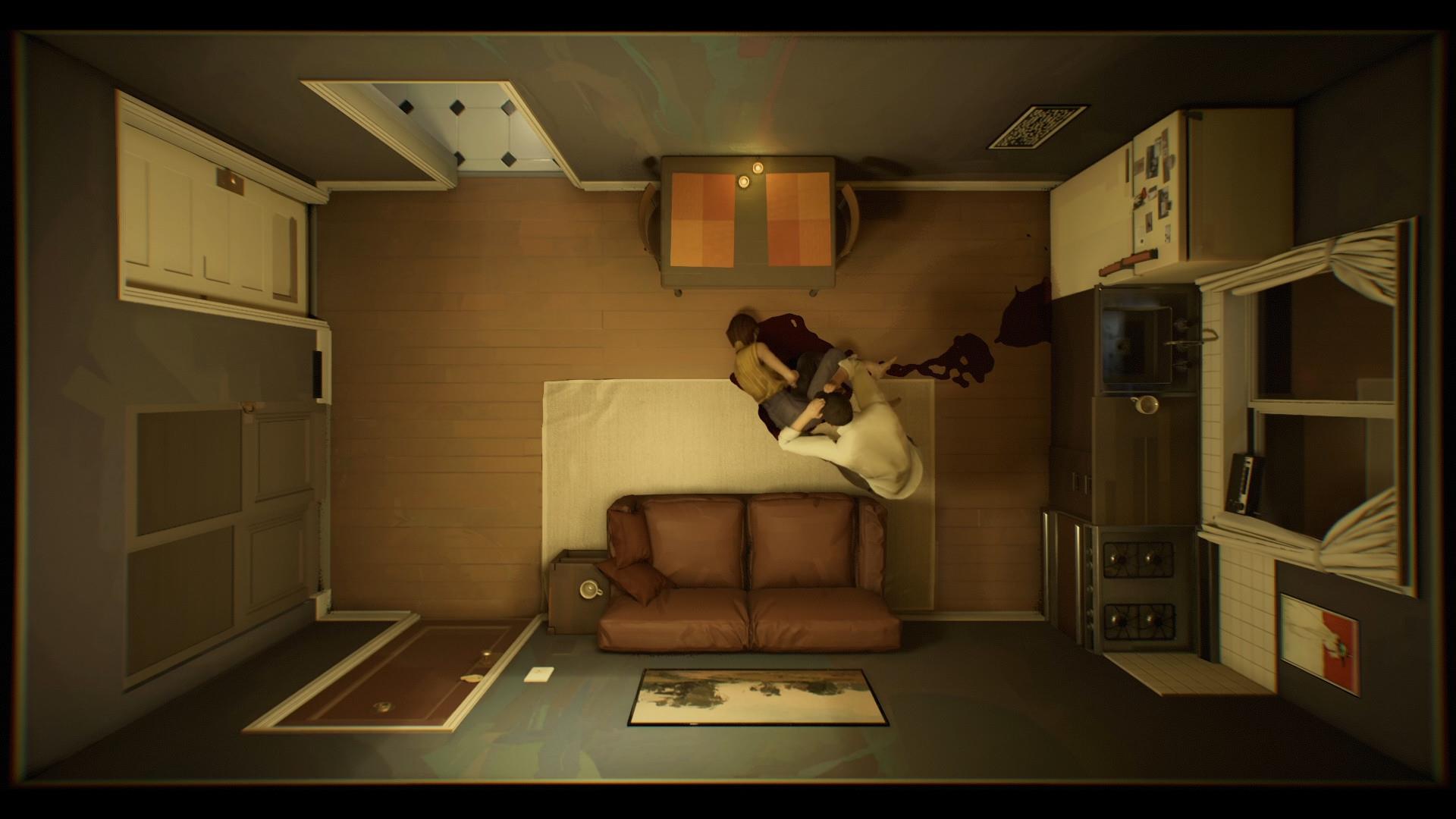 The game is played strictly in a top-down view and the art style is pretty simplistic. It’s not a game to show off the power of your PC or console, but the simple style works here as the story is front and center. There’s very little in terms of adjusting for how it looks, but that doesn’t matter. Like I said, there are just three rooms you can walk around in and there isn’t too much to interact with.

The voice acting is top notch with James McAvoy, Daisy Ridley, and Willem Dafoe lending their distinct and talented voices to the game. They do a good job showing off a range of emotion from loving, worry, sadness, and anger.

In the end, Twelve Minutes is a short, engaging point-and-click adventure that does a great job giving little nuggets along the way—until the reveal that floors you. There can be some frustration in trying to interact with the characters or objects as the game seems to get a little confused sometimes with the character movements, but that’s uncommon. Annapurna Interactive has done a great job in crafting a simple experience with an intriguing story. It’s not something that will take up too much of your time, but can have a great effect on you when you finish it.

Twelve Minutes is a nice little point-and-click adventure game that will leave you stunned. Some points of frustration can make the game longer than it needs to be. Can get tedious at times if you're stuck.