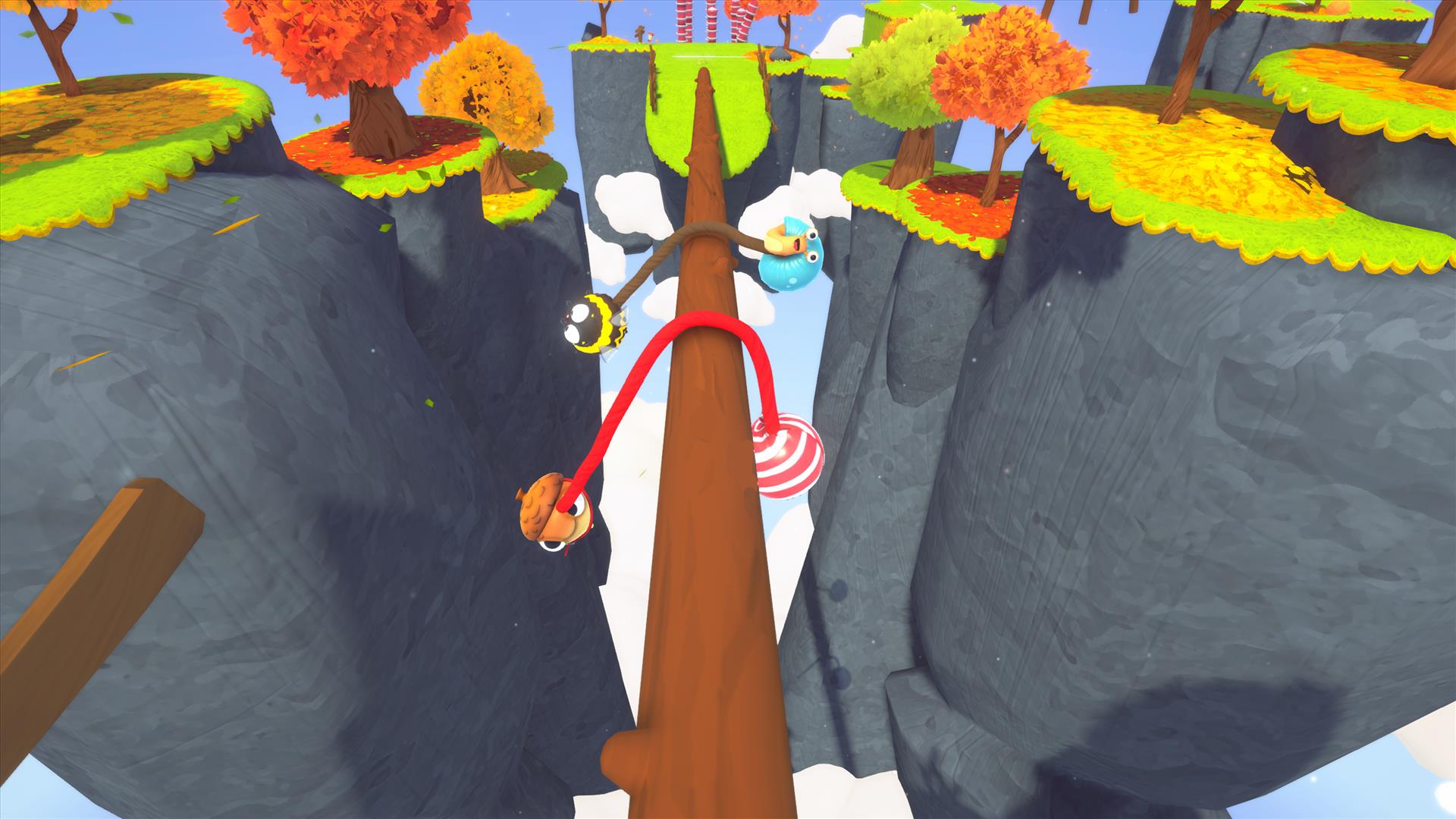 Fling to the Finish

Written by Elliot Hilderbrand on 9/8/2021 for PC
More On: Fling to the Finish

Getting into Fling to the Finish was easy. You control a spherical character, like an apple, or bee, your partner controls one as well, and the two of you are attached by a rubber band. Understanding the controls is easy as well. Besides your basic movement and jumping you can glue yourself to surfaces and fling your partner. And that’s all there is to understanding the basics. Anyone can pick up and play right away. It doesn’t matter if I play video games all the time, or if it's my wife who only plays The Sims and Grand Theft Auto—we both could hop into the game and quickly understand how to play. Fling to the Finish requires little understanding, but to make it through the latter levels requires timing and precision.

Right now Fling to the Finish has two modes: a traditional campaign, and a race. The campaign can be played either solo or with a friend, and you can do that on the couch, online, or if you are daring enough while sharing a single keyboard. Most of my playtime was spent playing with another person, in the same room, my wife and a close friend. While I did attempt to play using one keyboard shared, we did not have much fun doing so, spending too much time figuring out which key did what, and switched to controllers for the remainder of our gameplay. Racing is between one and eight players, and currently there are 12 tracks to race on, with more coming soon, racing can be done in person or online. Racing was fun. I’m sure if I could get eight people in a room to race together that would make for a great party game, but I had no problem finding people online to race against. 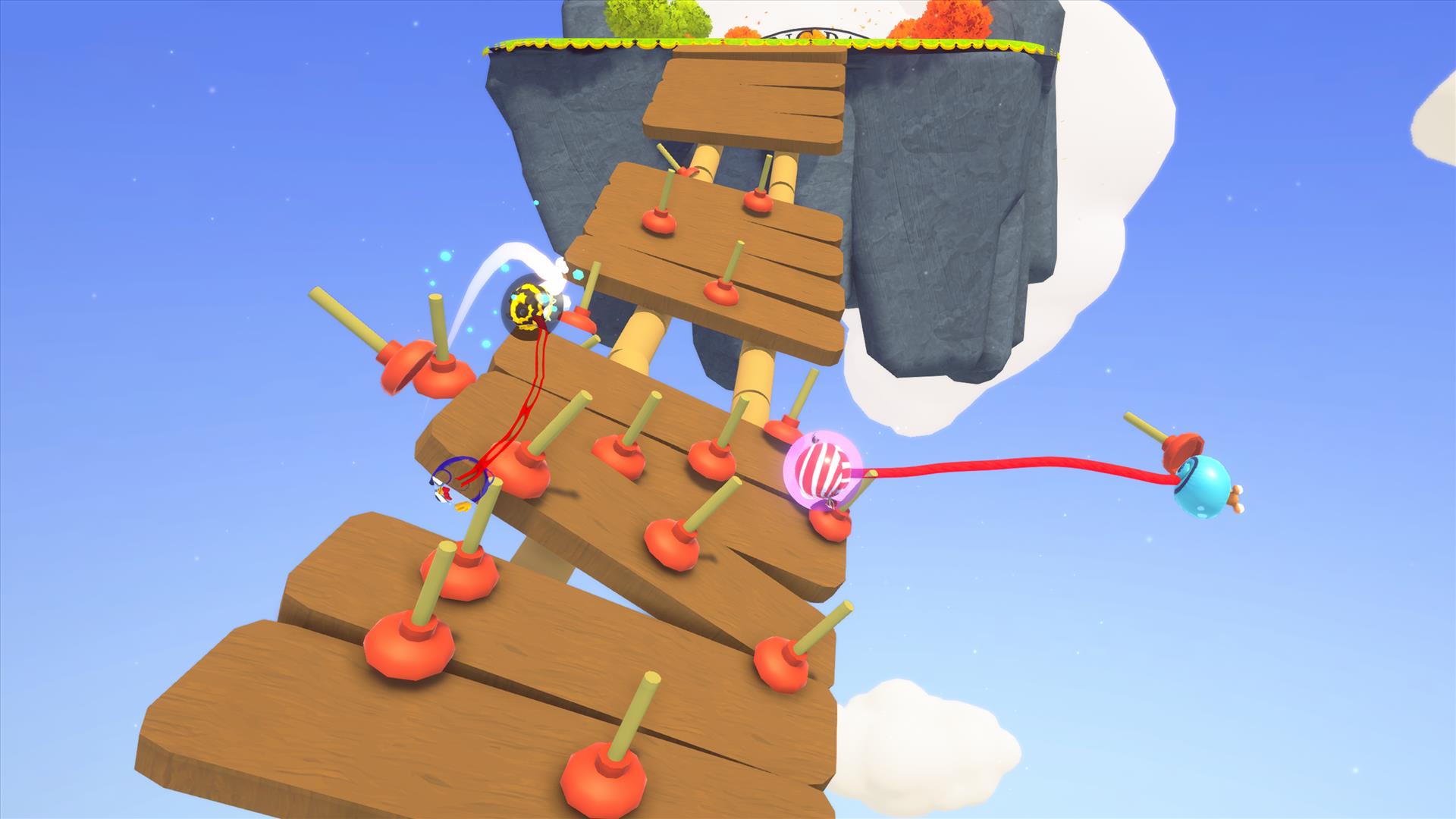 Currently there are three playstyles in the campaign: Duck Hunt, UFO Race, and Coin Frenzy. I can see that there are more styles of play to be had, but are listed as coming soon for the time being. In Duck Hunt you play through the map, looking out for three unique colored ducks as you advance. In the first handful of worlds finding the ducks wasn’t too hard. But as I progressed they really became a challenge, sometimes having to do multiple runs to grab all three. UFO Race is exactly that, racing against three UFOs, trying to beat all of them. Coin Frenzy has you run around the map, Mario-style, gathering at least 100 coins as you go through the level in a certain amount of time.

If you can complete these tasks you are rewarded with ducks. Find all three colored ducks in duck hunt, you earn three gold ducks. Beat only two of the three UFOs, you win two gold ducks. The more ducks you have the more maps you can unlock. Which happens to be one of the downsides to this game: in order to play more of the maps you need to earn more gold ducks. I didn’t find earning ducks to be overly difficult, but it did bog down my experience by forcing me to replay the same map over and over. 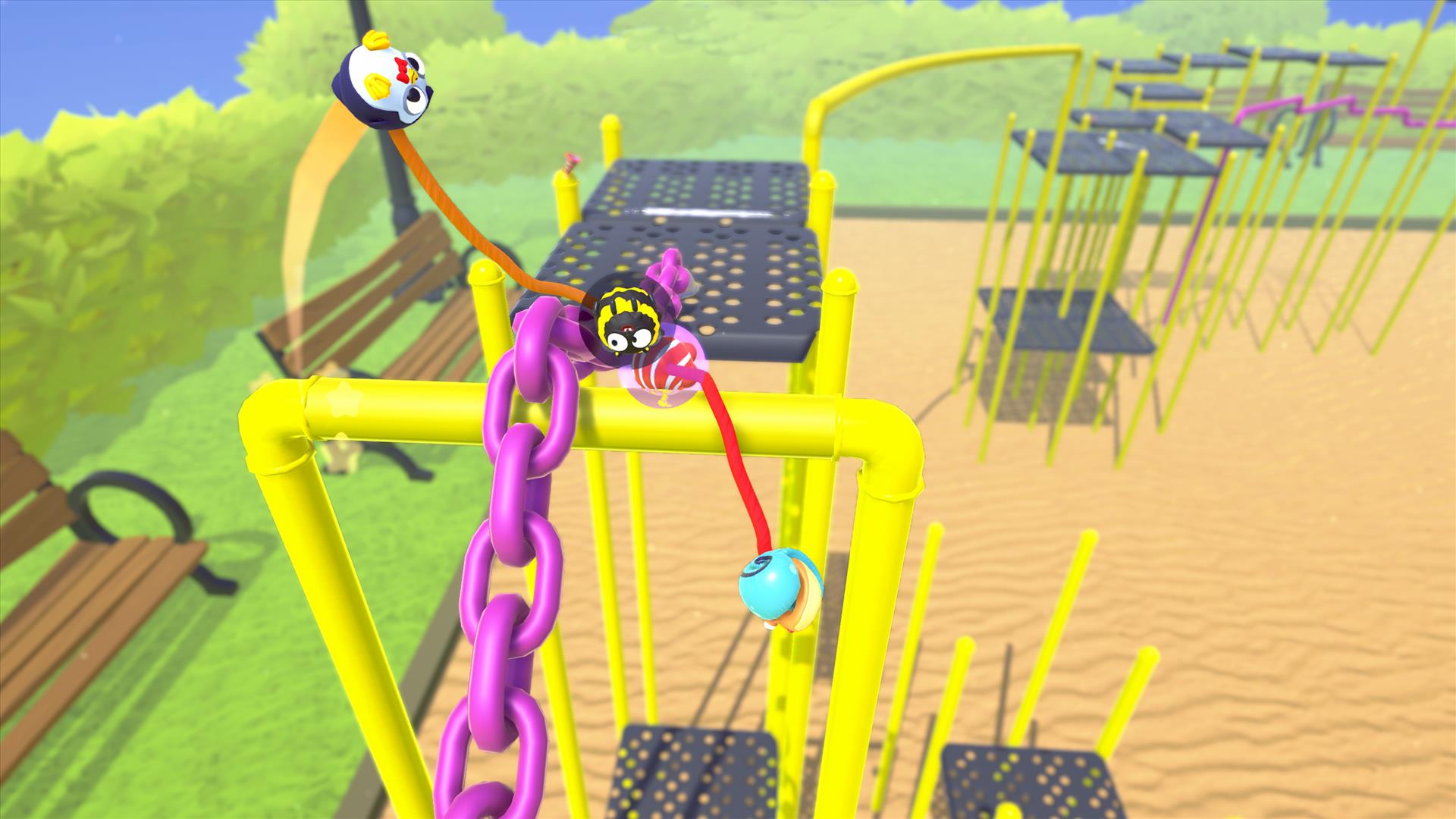 The only other complaint, other than having to grind for gold ducks, were the camera angles. At times my partner or I would get stuck in a corner, on the underside of a bridge, or something, and it would become next to impossible to see one of us. When this would happen we would often not even fight trying to fling ourselves back to safety, instead just marking it down as a loss, dying and trying again. I experienced the problem while playing solo a few times as well, but it mostly seemed like an issue I ran into while playing with someone else.

I wasn't bored with the three modes, Duck Hunt, UFO Race, and Coin Frenzy, but I always chose to play Duck Hunt first, and then UFO Race. Once I had enough ducks to unlock the next level, I would do so, and repeat. Occasionally I dipped into the Coin Frenzy mode to continue on. Fling to the Finish has three different modes, but it is the same map, more or less, with slight modifications. 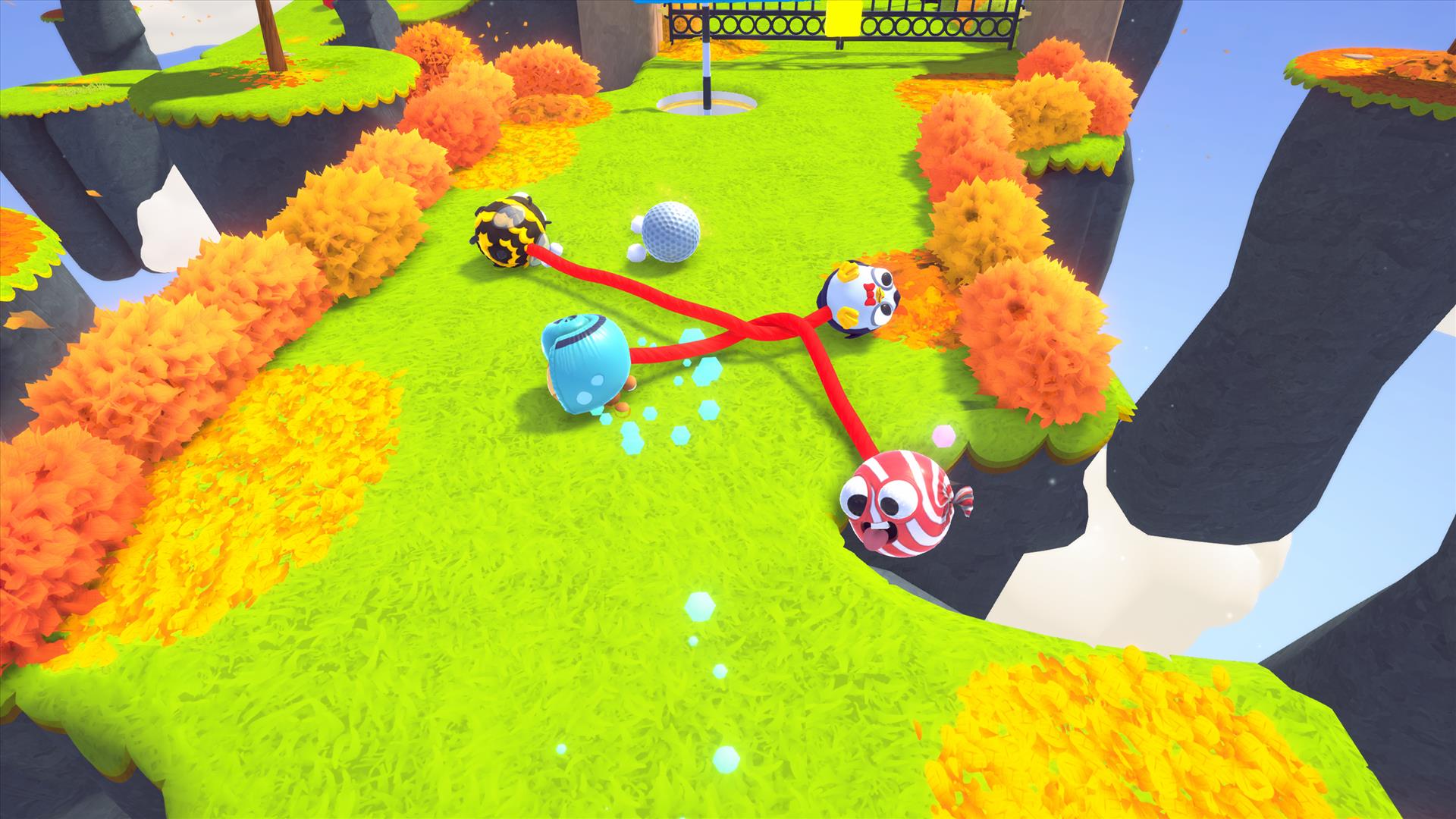 Most of my time was spent playing along with someone, but did try out the campaign as a single player controlling both characters. The biggest difference when playing solo was the difficulty spike that came along with attempting to control both characters at once. When playing solo it really matters knowing which character is on your right stick and which is on the left. Things became much more complicated, quickly, but in a good way. I felt that playing solo was the real challenge, and required more attention to detail, especially when it comes to where my two characters were placed, who I was trying to stick versus who I was tossing. I didn’t feel the same sense of joy when I overcame an obstacle by myself compared to when I was doing it with someone else. There is something to be said about the shared experience of spending five minutes flinging each other back and forth in order to grab a floating duck that sits just out of reach, and the satisfaction of finally nabbing it.

While I did not have the problem of convincing my friend or my wife to play the game with me, I understand how others might not have the same luck. A great feature that Fling to the Finish uses is Discord. If you don’t have anyone to play with you can quickly hop into the game’s Discord server and find someone. While I never had to go that route to find someone, I did look into it and found it easy to use, and the community is friendly. The game also uses room codes, in case you only want to play with select friends online, another simple and welcome feature more games need in my opinion. 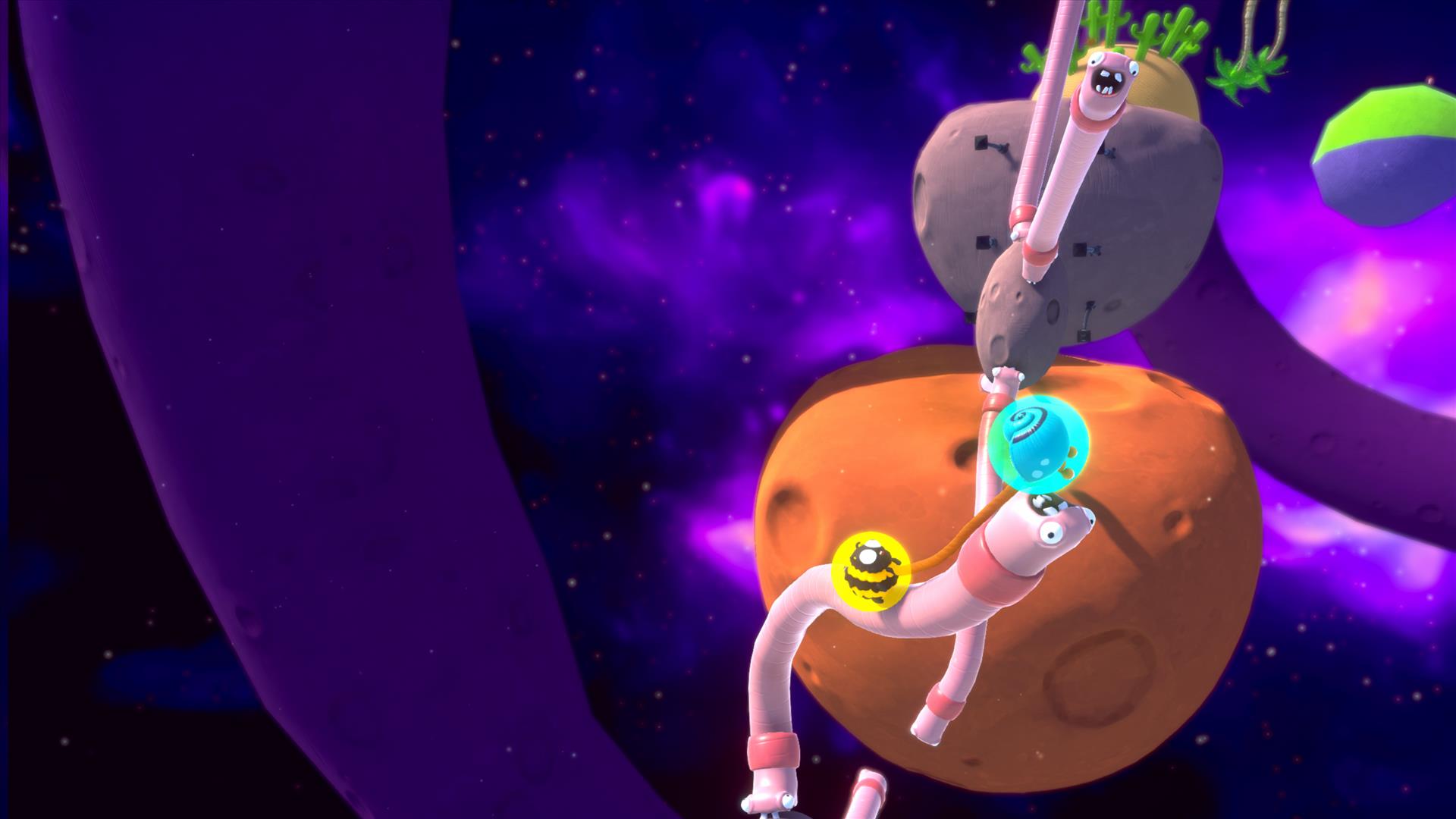 Each world has several levels on it, each one unique from the last. A desert stroll, to a bricked garden, or my favorite, a casino. I eventually didn’t mind playing each map a handful of times because of the ever-changing levels. As I progressed, so did the levels themselves. The level would take five or six minutes to find all three ducks. As the game progressed, new levels could take 12 minutes to work through because of how complicated maps became.

I hesitate to call this a party game, as Fling to the Finish is really a game about you and your partner. But this will be the game I bring out when I have people over for the foreseeable future. It’s simple enough to get into, and advanced enough to not feel like a cheap parlor trick at the same time. Runs usually start out simple enough, and then someone makes one bad move and abrupt chaos ensues as we’re rolling down a hill, dodging lasers, while trying to snatch up the colored duck at the same time—and then we both have to wipe the sweat from our brows when all is said and done.

It's very satisfying when you spend the last five minutes trying to fling you and your partner up a deck of playing cards, and the satisfaction that comes when you reach the top. Fling to the Finish provides plenty of fun, even in Early Access. A fun time can be had with friends, and a challenge awaits anyone willing to try the game by themselves.