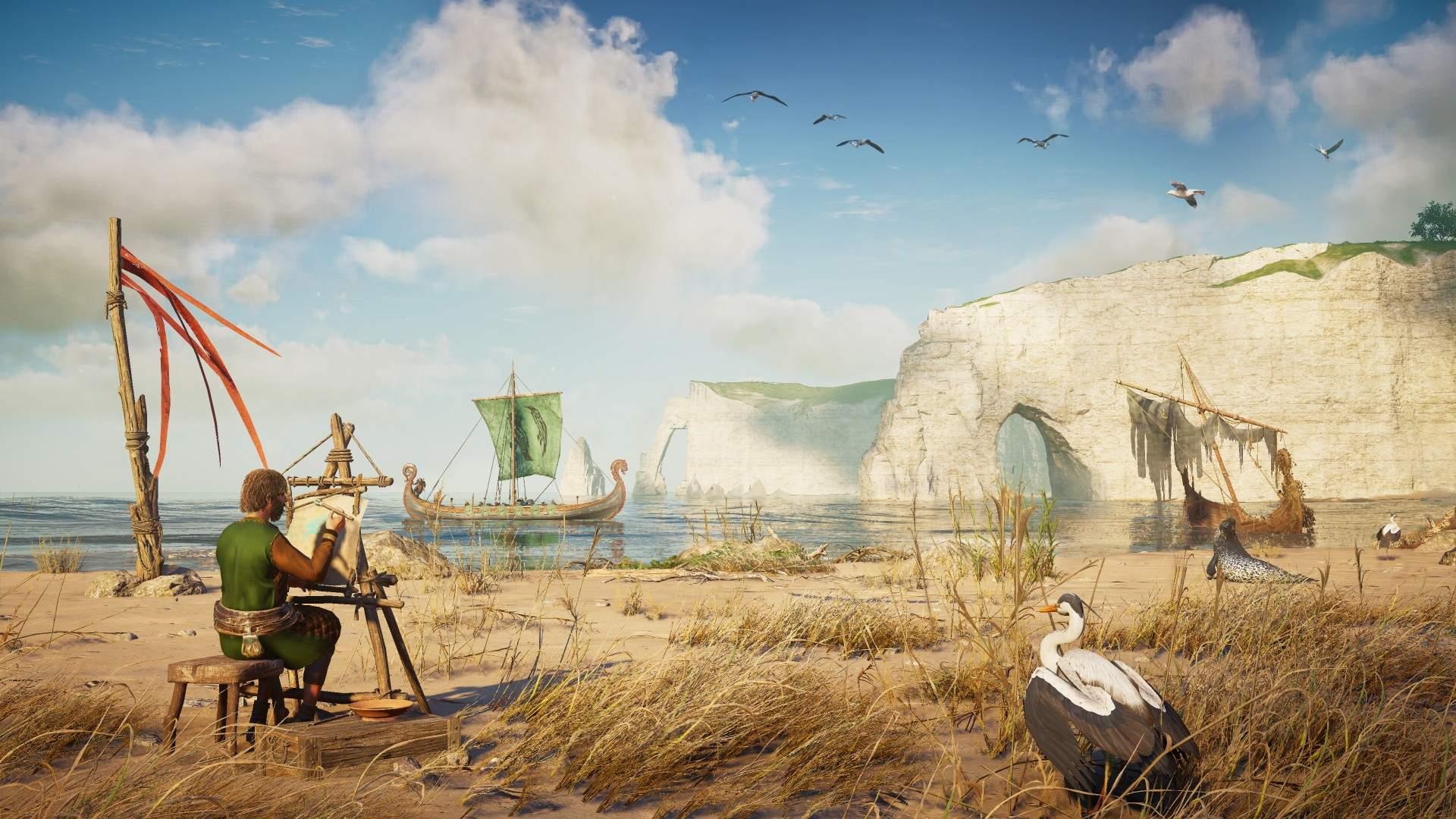 Eivor, where did your common sense go? While diligently scouting the lands of Francia and attempting to thwart a lunatic with a crown, I couldn’t help but continuously ask our drengr this question.

Assassin’s Creed Valhalla’s second expansion, The Siege of Paris, introduces new characters, features, weapons, abilities, decisions, and challenges. However, it doesn’t stray too far from what’s worked thus far. Except for one slight but noticeable wrinkle: our grizzled warrior’s logic and awareness seem to have dulled like a battle-worn axe.

Similar to Valhalla’s initial expansion, The Siege of Paris begins when two visitors make themselves at home on the outskirts of Ravensthorpe. After a thinly veiled attempt at buttering Eivor up with drink and grub, the visitors, Toka and Pierre of the Elgring Clan, alert Eivor of a budding problem in Francia: Charles the Fat (what a lovable moniker) is assembling armies to drive the Norse out of the region. If he succeeds, he may very well come for England next. Toka’s and Pierre’s expedition through England has, thus far, been unsuccessful. Other Jarls aren’t concerned about a foreign monarch, but, of course, Eivor isn’t like other jarls; he answers the call to arms after some keen advice from Randvi. Eivor, the unrelenting army of one, ventures to Francia with his new Norse allies, commencing the expansion’s main story arc. 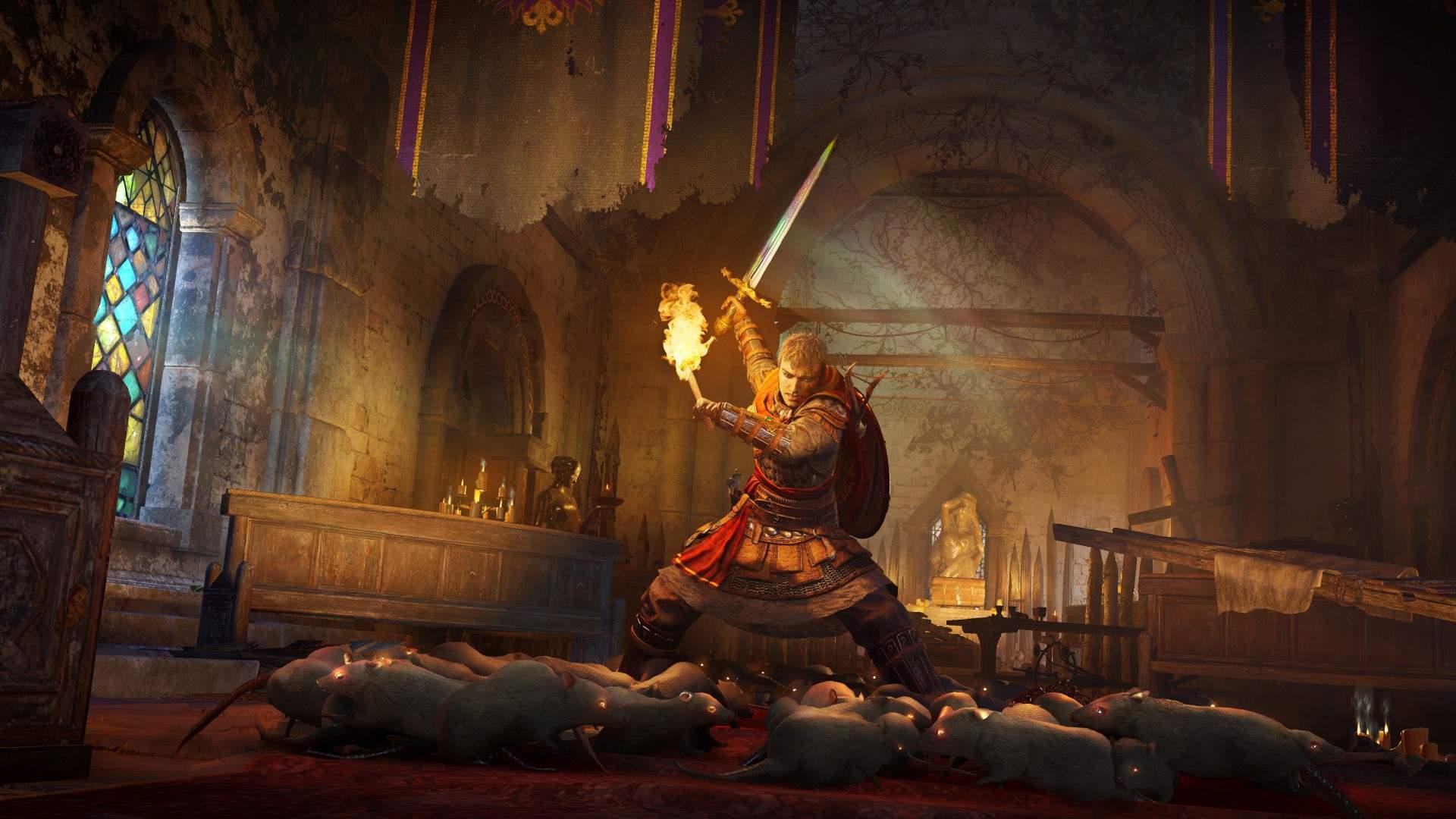 Francia is far from hospitable. This is evident from the moment Eivor’s longship enters her waters, as Norse soldiers hang from the trees along the river’s shore—our first insight into Charles’ domestic policies. Beyond the corporeal welcome signs, the lands of Francia are far from aesthetically pleasing. Ominous darkness seems to hang over the country. No majestic fields and rolling hills of luscious green. The country is bleak and seemingly deprived of human life. That is, until we come across familiar Norse faces.

Our Francia brethren aren’t unlike those scattered throughout England. There’s Toka, who has a clear passion for fighting but also carries insecurities about whether she's equipped to lead. Pierre, who advises Toka, lurks in the background; his demeanor evokes the sense that he has other, unspoken motives. Sigfred, the head of the Elgring clan, is the kind of guy who leaves a trail of bludgeoned bodies in his wake, whether they were innocent and defenseless is irrelevant. He’s burdened with the heaviest emotional weight of them all: his brother, the former Jarl, was brutally executed by Frankish soldiers, which eats away at his soul and spurs a constant existential crisis. This is evident from just about every conversation Eivor has with him. Sigfred’s internal fire fuels the Norse siege of Paris, which is as much about territorial expansion and plundering as it is about avenging his fallen comrade.

Paris itself is in shambles and plague-stricken. Beyond the slums of Paris being riddled with impoverished and sickly citizens, the most consequential byproduct of the plague is the addition of immortal, bloodthirsty rats the size of daggers. Yes, you read that correctly. These rats are more so a puzzle-like addition to Valhalla rather than a beatable opponent. Instead of killing your rodent foes, Eivor must “shoo” them away with flurries of arrows, strikes, and even explosions. Only then will the rat hordes scamper to a nearby sewer grate and stay temporarily hidden. The plague rats of Francia (which almost sounds like the name of a band) serve more as an irksome inconvenience instead of a welcome challenge.

Despite the name, the expansion does not play out like the base game’s traditional sieges where Eivor and his allies fight through armaments and waves of defending soldiers. Instead, the Siege of Paris is a slow burn infiltration, as Eivor attempts to find peace in a haystack of bloodied swords by seeking a civil agreement with King Charles. 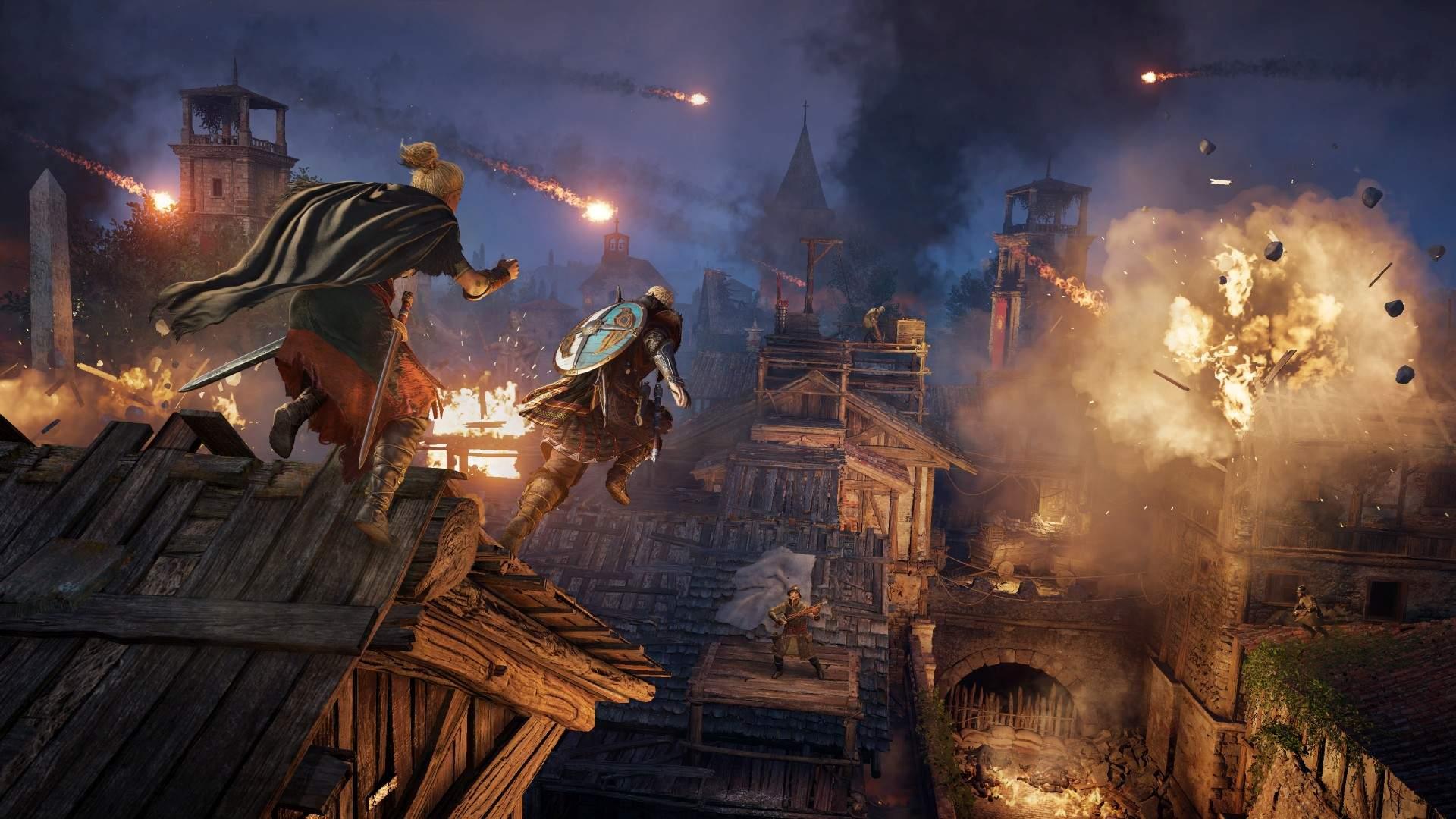 King Charles the Fat’s character, whose presence creates tangible tension, is refreshingly twisted. His mental health has clearly deteriorated to a point of needing extensive therapy—a service that wasn’t exactly prevalent in 9th century France. I say, “Bring on the internal anguish.” Amidst the usual cast of barbaric drengrs and snooty nobles, Charles was a welcome and unique addition.

For all the talk about Francia and Charles being significant threats, the writing on the wall tells the opposite story. Charles seems uninterested in pretty significant political concerns. The Norse invasion advances without much of an impediment. Other than being bound together by religious beliefs, Francia’s leader, nobles, and people seem quite fragmented. The country’s stability is fragile at best. Despite this, Eivor prefers to continuously take (and get burned by) a diplomatic approach to peace.

Eivor seems a little idealistic and naive in this expansion. The “fool me once, shame on you, fool me twice, shame on me” adage seems to be lost on our drengr. Despite his extensive experience as a negotiator, warrior, and clan leader, he seems to be too easily trusting. Eivor goes to great lengths to forge a tenuous relationship with a mentally shattered tyrant, who clearly has little loyalty to people he views as foreign invaders. He puts too much weight in King Charles’s obviously empty words—which are thin promises to consider his requests, much less abide by them.

Eivor’s underlying mission has always been to protect his clan—and he does not hide this fact. But, if anything, he puts himself, his clan, and his countrymen on the volatile leader’s map for conquest. His involvement seems to do more harm than good. 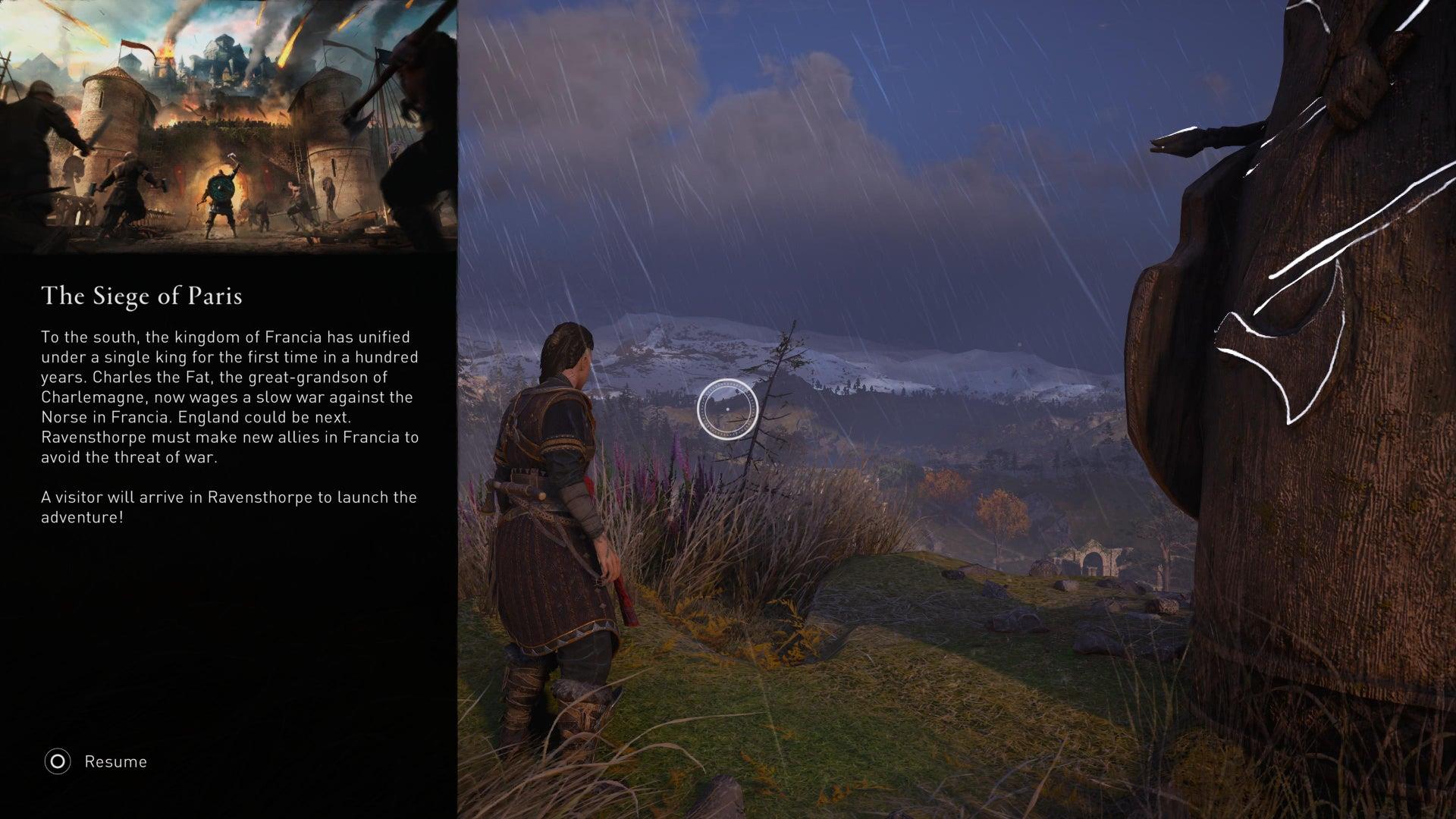 Outside of the main storyline, the Siege of Paris expansion had other notable additions, such as reintroducing a fan favorite feature of Assassin’s Creed: open-ended assassination events. Instead of a strictly linear path to killing a particular target, Eivor now has more flexibility with regard to his killing blow. We must employ an investigative approach to find the most fulfilling assassination, which produces a cinematic execution. There was a sense that cultists would reappear with this feature after an early mention of corruption in the church—and the nefarious acts of “spiritual cleansing” seemed to align with that sentiment. Alas, nothing ever came to light. That was a bit of a disappointment.

Rebel missions are also a “new” feature, but other than a fancy map marker and in-game shop, the actual objectives aren’t much different than before. Pierre and any one of his many colleagues spread across Francia give you a list of potential missions to aid the French resistance’s revolution. The rebels will accompany you on your quests; however, their contributions are pretty inconsequential, as I found myself doing most of the dirty work. Once completed, these missions reward us with deniers, a new currency that can be used to purchase rebel upgrades and armor.

Valhalla’s second expansion also introduces a new weapon class— scythes—and a new foe—heavy cavalry. The former is successfully entertaining, as it’s a lighter two-handed weapon adept at clearing crowds. The latter is successfully annoying, as heavy cavalry function more like mini-bosses that require an inordinate number of blows (spaced between frequent combat rolls) to kill. During each of my encounters, the infamous horse-soldier was the last one to fall. Along the same lines, the expansion seemed to tinker with the base game’s combat system hierarchy. Although my power level was 150+ levels higher than the territory’s suggested minimum, Francia’s enemies were routinely labeled as “hard” enemies. This renewed the challenge of combat since a couple of blows were enough to kill me, but it was still perplexing.

Overall, the Siege of Paris expansion serves as a continuation of what worked in the base version of Assassin’s Creed Valhalla. “New” wrinkles have been added to the fold, but it’s ultimately more of the same. The main story arc feels a little illogical at times, but Charles’ character depth keeps things entertaining. All in all, Valhalla’s second expansion embodies the concept of “if it ain’t broke, don’t fix it.”

Assassin's Creed Valhalla: The Siege of Paris is less of an expansion and more of a continuation, which isn't necessarily a bad thing. While Eivor's character development seemed to take a step backward, fans of the base game will still enjoy another 10 or so hours of gameplay thanks to Francia's new storyline, characters, weapons, and abilities.