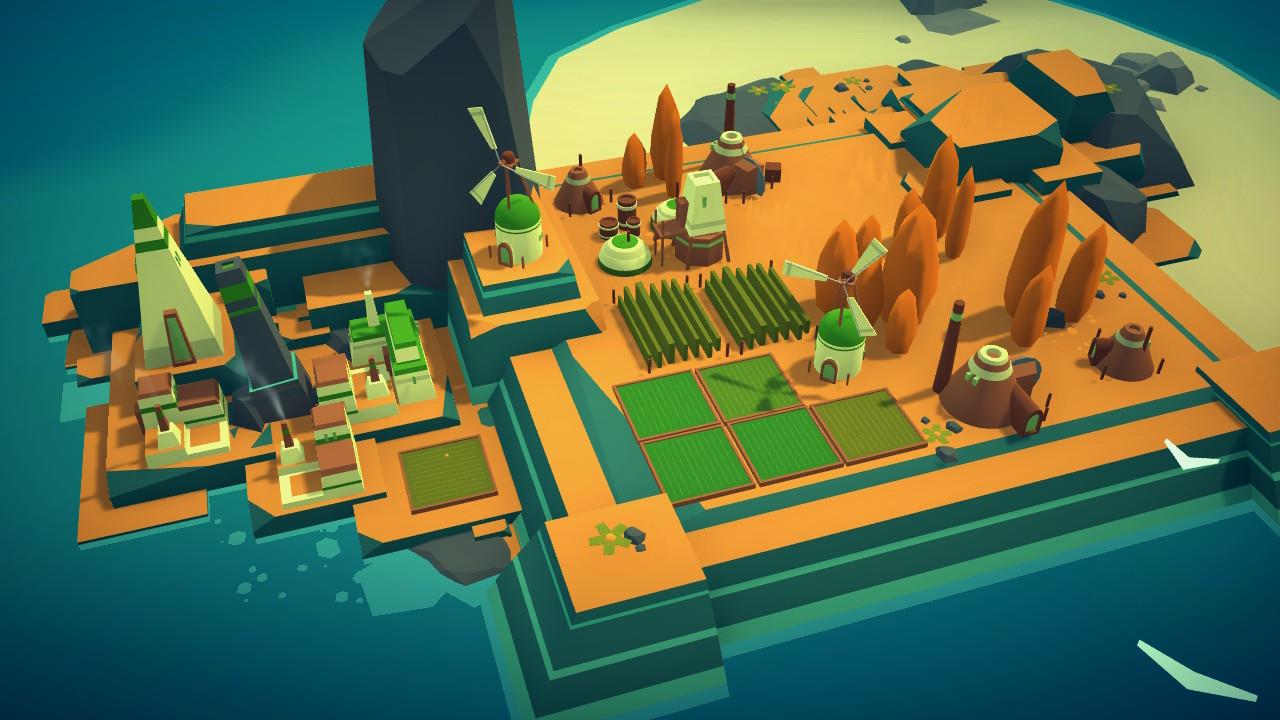 I was on vacation last week, traveling in New England with my wife and kids, occasionally staying with in-laws, and powering through day after day of planned activities and carefully maintained schedules. My vacations aren’t terribly relaxing, so I have to steal little bits of time between outings to sneak off by myself and chill out a little bit. This usually involved me hunkering down in a quiet room with my Switch.

I was struggling to find a game that suited my mood during vacation. Everything seemed too involved to continuously pick up and put down except for arcade games, and they weren’t exactly meeting my relaxation criteria. That’s when I discovered Islanders: Console Edition. 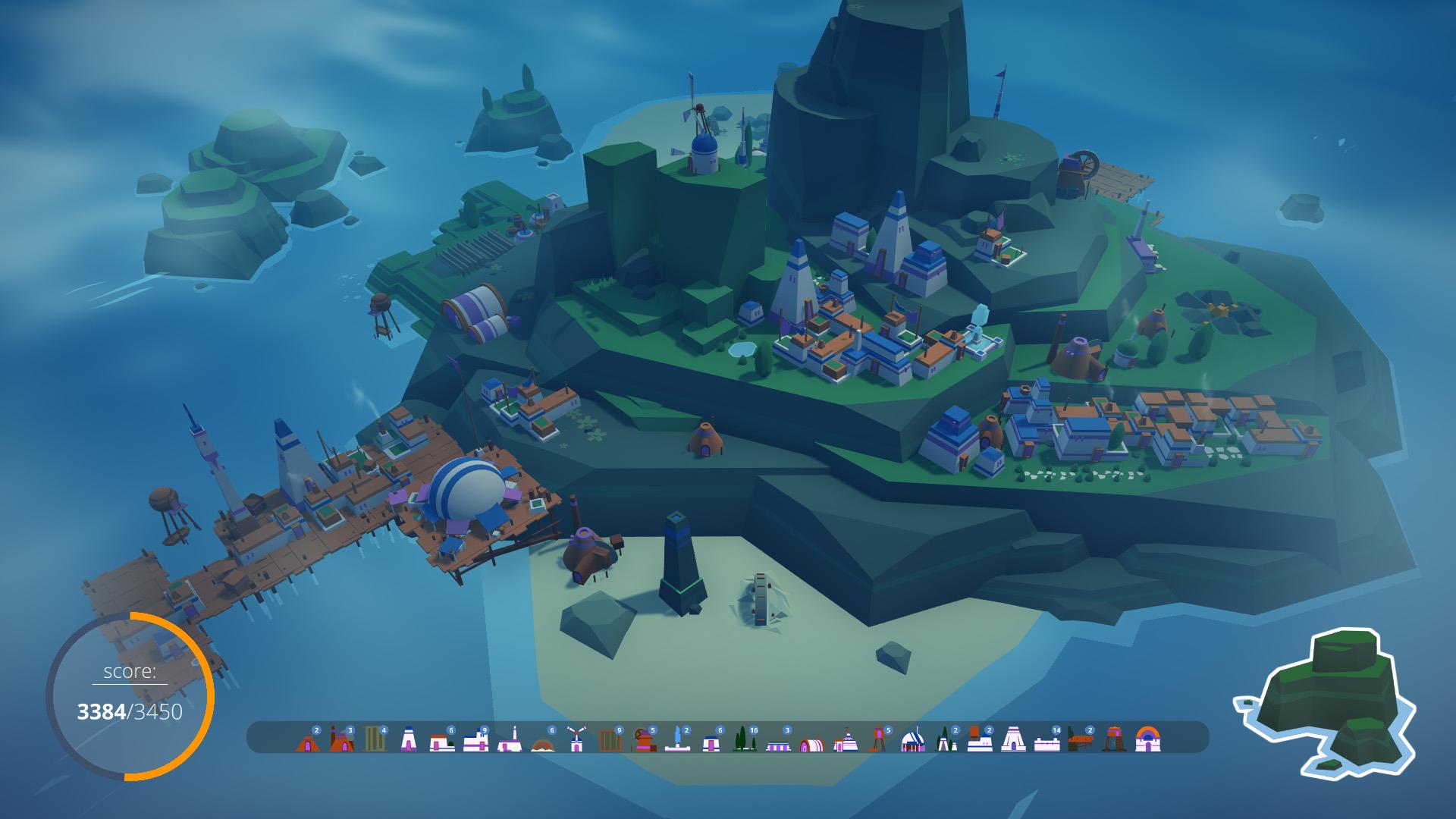 Currently available on Nintendo Switch for five bucks, Islanders: Console Edition is the console adaptation of GrizzlyGames’ 2019 Steam hit. It is a tight, focused game that knows exactly what it wants to do and does it with as little fuss as possible. Sometimes less is more, and GrizzlyGames proves that by stripping out almost every mechanic that players might readily expect to see in a city builder. In fact, the only recognizable activity in Islanders that might merit its inclusion in the city building genre is the placement of buildings. Everything else – from resource management to road building – is left on the mainland as Islanders sets its own chilled-out course.

Islanders is a game of proximity. Players start each game looking down on a pristine procedurally generated island. The islands are fairly small, sometimes rocky and full of cliffs, sometimes grassy and plain. Choosing a small initial selection of buildings, players begin plunking them down on the island, picking up varying amounts of points depending on their placement. 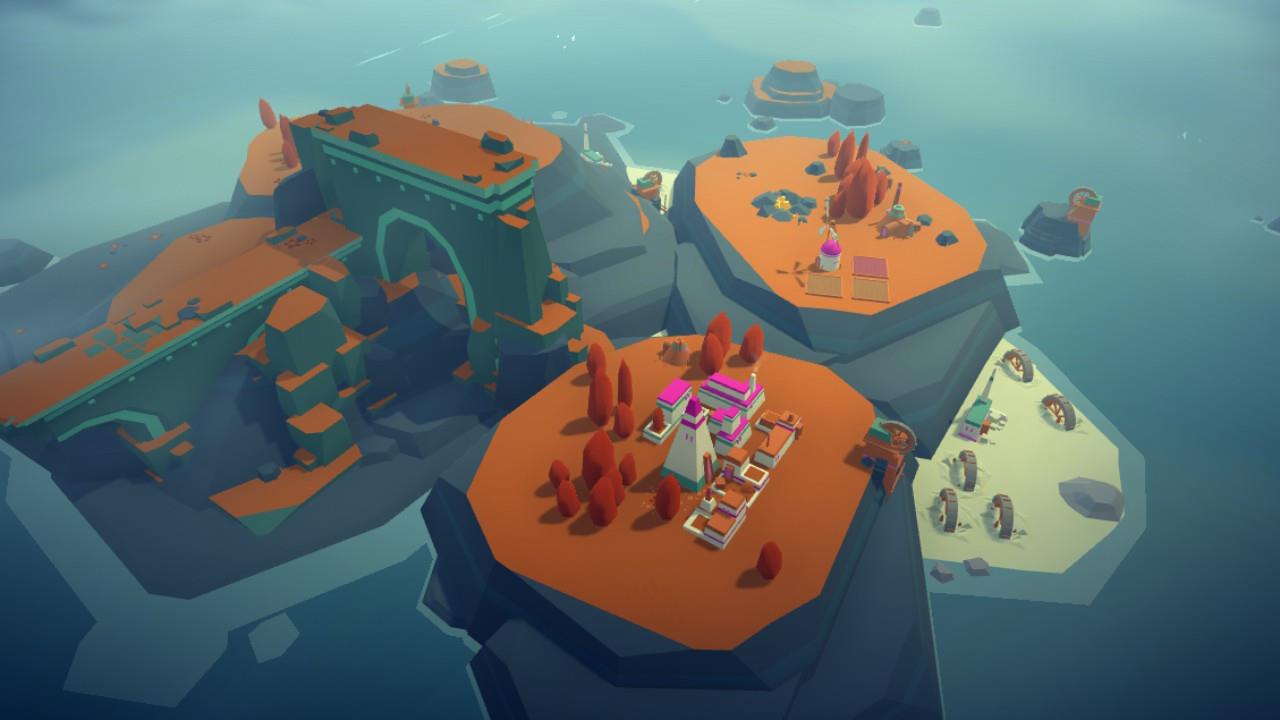 This may sound complicated when I explain it, but in execution it really is not. Each little building is surrounded by a nearly invisible sphere, showing just how close structures need to be to impact each other. Lumberjack huts have a much smaller sphere than the sawmill, allowing players to easily intuit the correct order and placement of each item. Furthermore, you can slide your buildings all over the map before placing them, with the game showing you precisely how many points you will pick up by placing them at each location. All the information you need is right in front of you; you just need to make smart decisions and plan for the future. 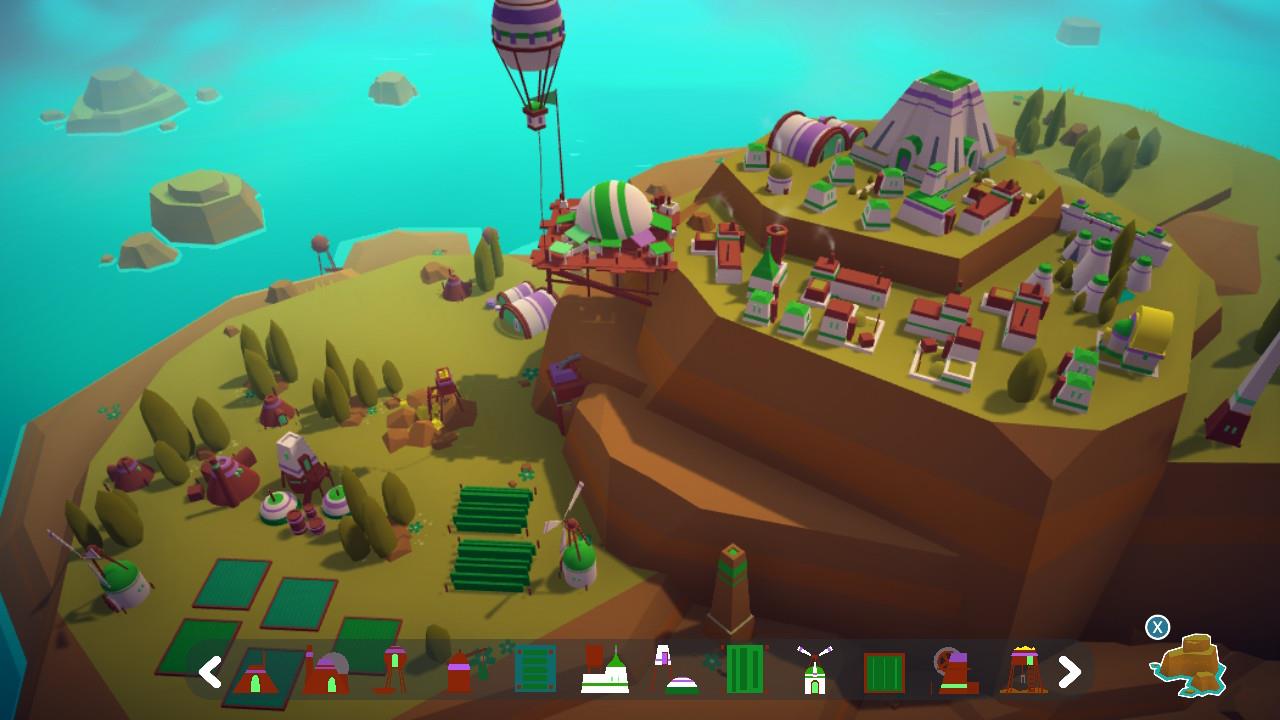 Each island has a series of escalating checkpoints that allow you to unlock the next selection of buildings to plunk down (you get to choose between two options; farm pack vs. brick-making pack, for example). After scoring 20 points, you can grab another pack of structures, then again at 75 points, then again at maybe 200, and so on. After a certain point, Islanders says, “Okay, enough with this island,” and offers players the chance to scoot on over to a newer, fresh island, abandoning their work for the chance at a clean slate with all of their points intact.

And that’s really it. Start an island, place buildings, get points, unlock more buildings, get more points, move on to the next island. There are no further mechanics, no hidden penalties. Resources are meaningless once you place your buildings. Go ahead and plop houses down on those trees that gave your lumberjack huts so many points, that part of the game is over. No need to worry about tending those farms, or even placing any mansions nearby for inhabitants to work them – the fact that they are there at all was enough to win those initial points. 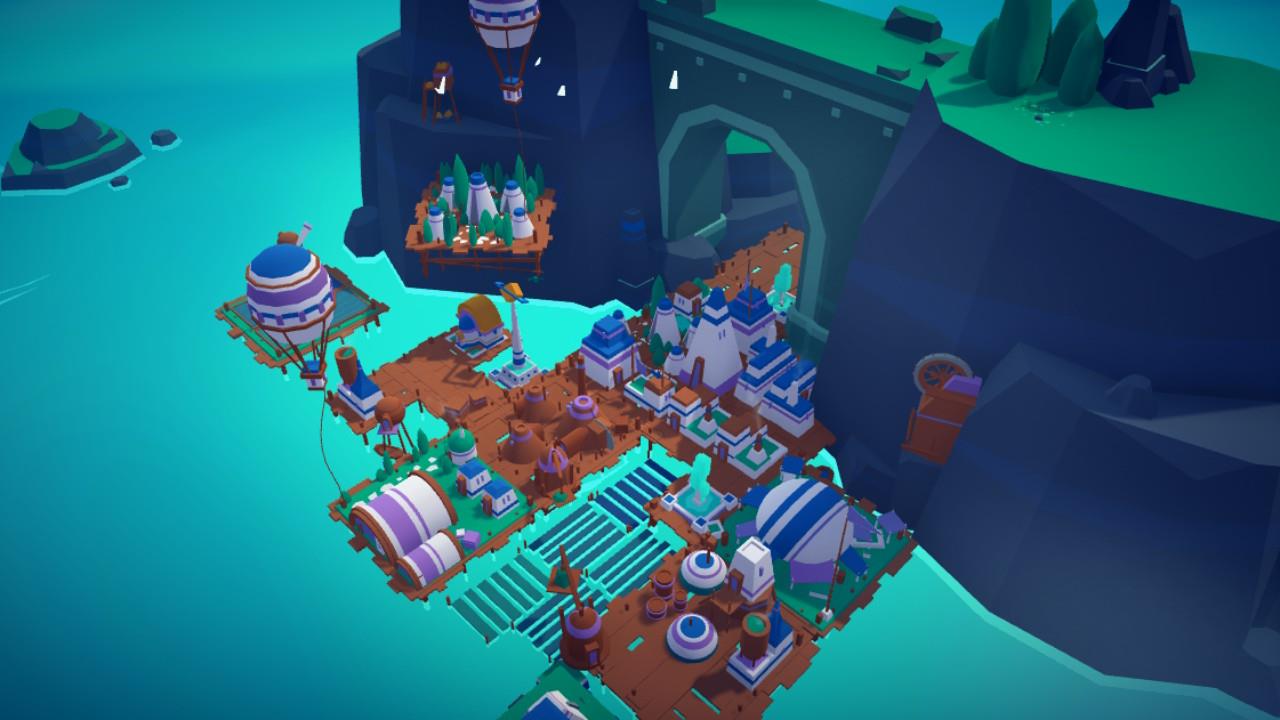 This relaxed gameplay loop all adds up to a super chill high score quest, with very little else to clog up the works. If you run out of structures to place before you hit the next point plateau, the game ends, and you shoot your high score over to the global leaderboards. Click the A button and start again with a little more knowledge than you had last time.

Everything about Islanders feels soothing and low pressure, making it a perfect video game retreat from the relentless family time during my vacation. The music is super lowkey, just kind of thrumming in the background. The transition between islands is accomplished in a wash of clouds and pleasant whooshing sounds. The menus are simple and friendly, and losing the game feels like no big deal when you can just tap a button and start again. 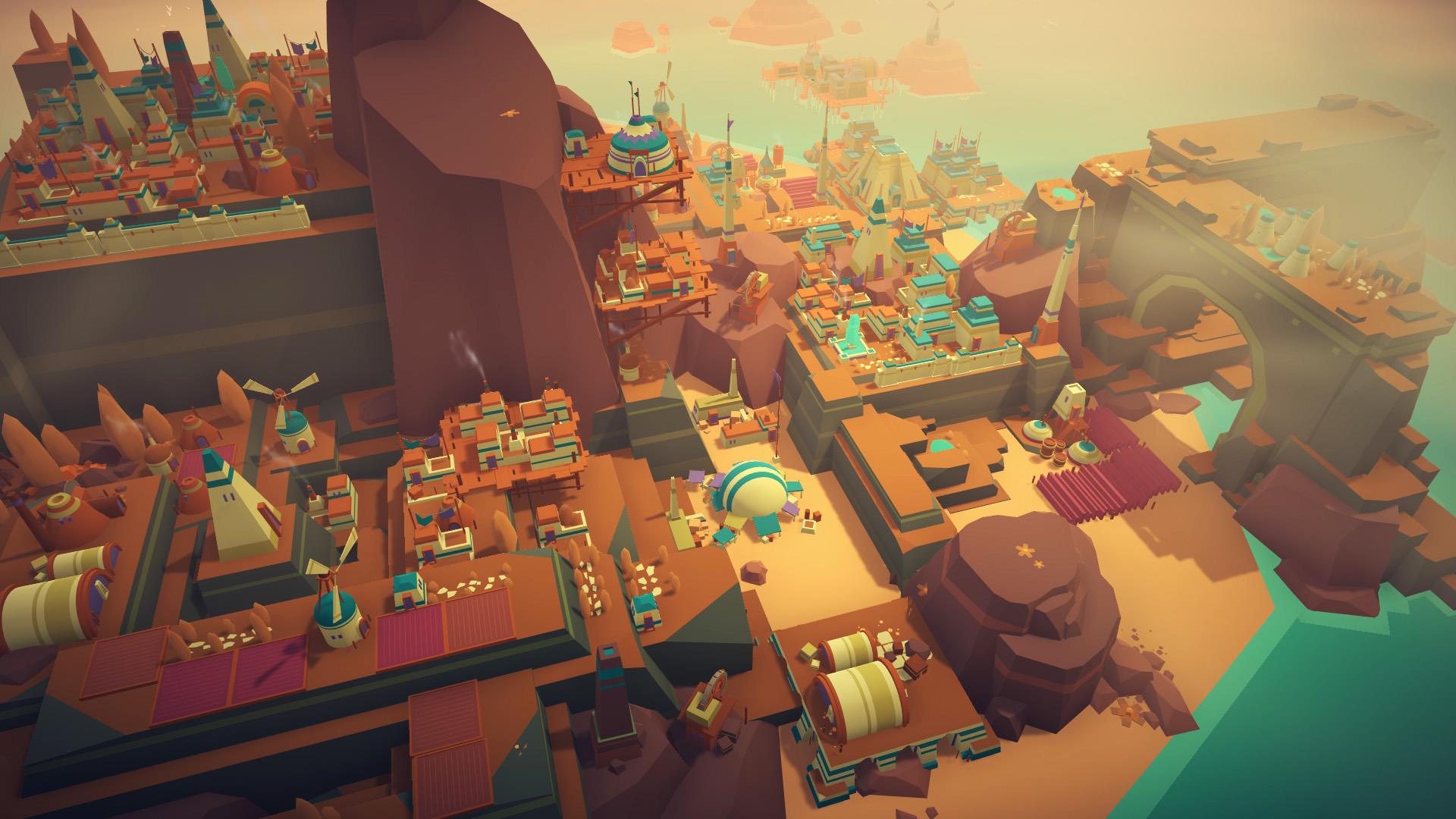 The only real issue I had with Islanders: Console Edition came with the somewhat finicky controls, which made it difficult to place structures with the precision I desired. Things would settle just a little too far in one direction or the other, leaving me constantly adjusting and readjusting my buildings before placing them. This may seem like no big deal, but in a game where land is at a premium, the precise placement of these buildings is kind of the only mechanic in the game. It would have been nice if it were smoother. I kept wanting to tap the touchscreen and drag my structures to where I wanted them, but alas, no touch controls have been implemented.

Even with the control issues, Islanders is about the best five-buck game I’ve come across on Switch. The game gets right down to business, with no frills but plenty of solid gameplay. This is one of the few console games that I think would do really well on mobile – and would be worth playing after the transition. Islanders is just as fun to pick up and play for a few minutes as it is to zone out on for an hour or two. For a non-arcade title, that is a rarity indeed.

Islanders: Console Edition trims every bit of fat from the city-building genre, stripping it down to the core mechanic of plunking down buildings for points. While the controls are a bit fidgety, the chill gameplay and focused mechanics more than make up for it. Play for a few minutes or a few hours, either way, Islanders delivers.