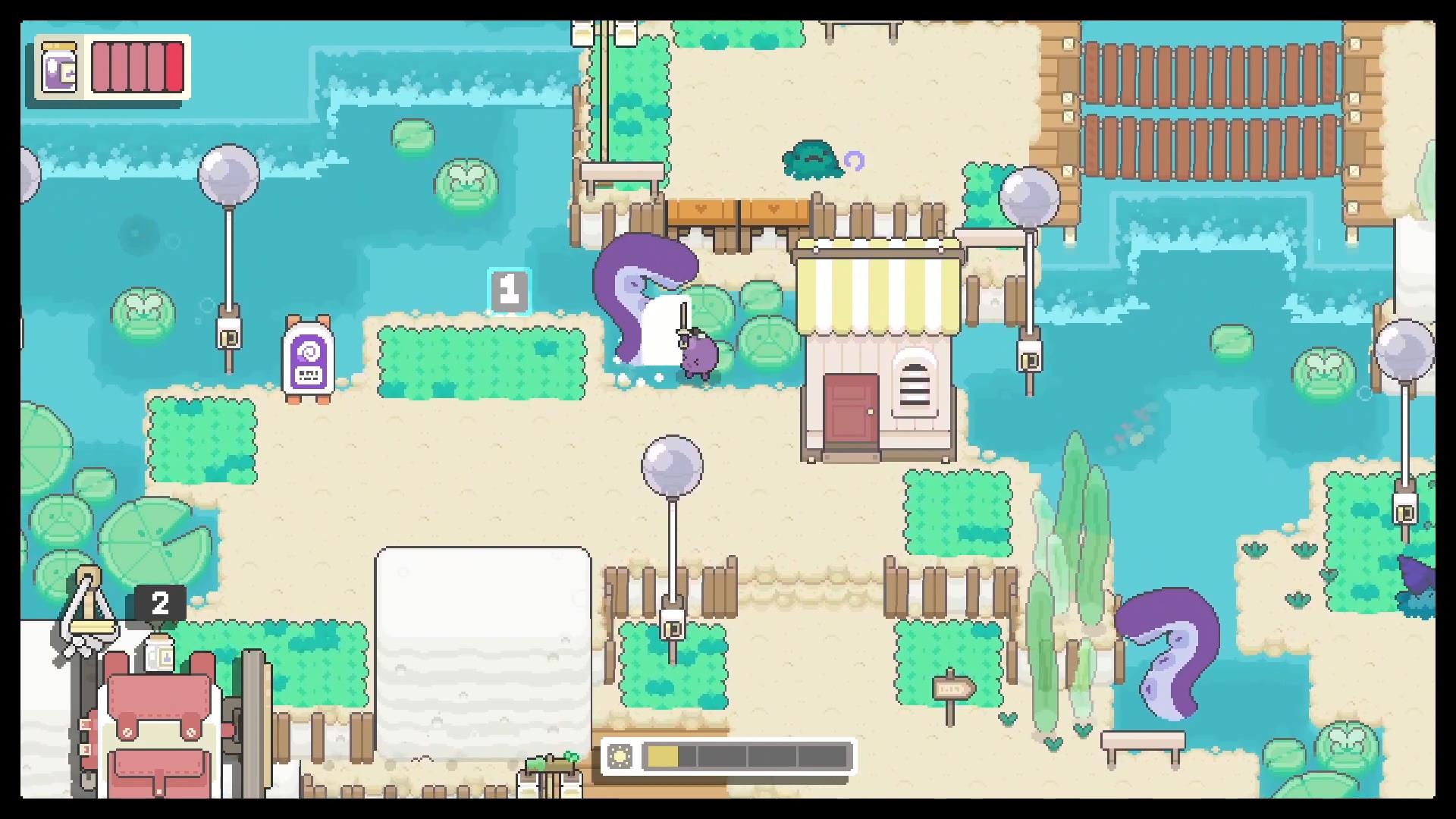 Written by Elliot Hilderbrand on 9/2/2021 for SWI
More On: Garden Story

Garden Story tells the adventure of Concord, a grape who quickly graduates from kindergarten to becoming one of the new guardians, who were once foretold to bring back peace to the region, and fight back against the rot. To be honest, it can be a lot to take in as a brand new grape, but grapeness can be seen just around the corner. (Expect a lot of grape puns to be used here on out. You’ve been warned.)

You are quickly moved out of the kindergarten vineyard and into one of the towns, where Concord must do what he can to make the region grape again. Every morning you wake up to a handful of quests or chores to do for the townsfolk. Daily quests come in one of three varieties: defeat some rot, build or repair a vital piece of equipment, or forage for the livelihood of the village. 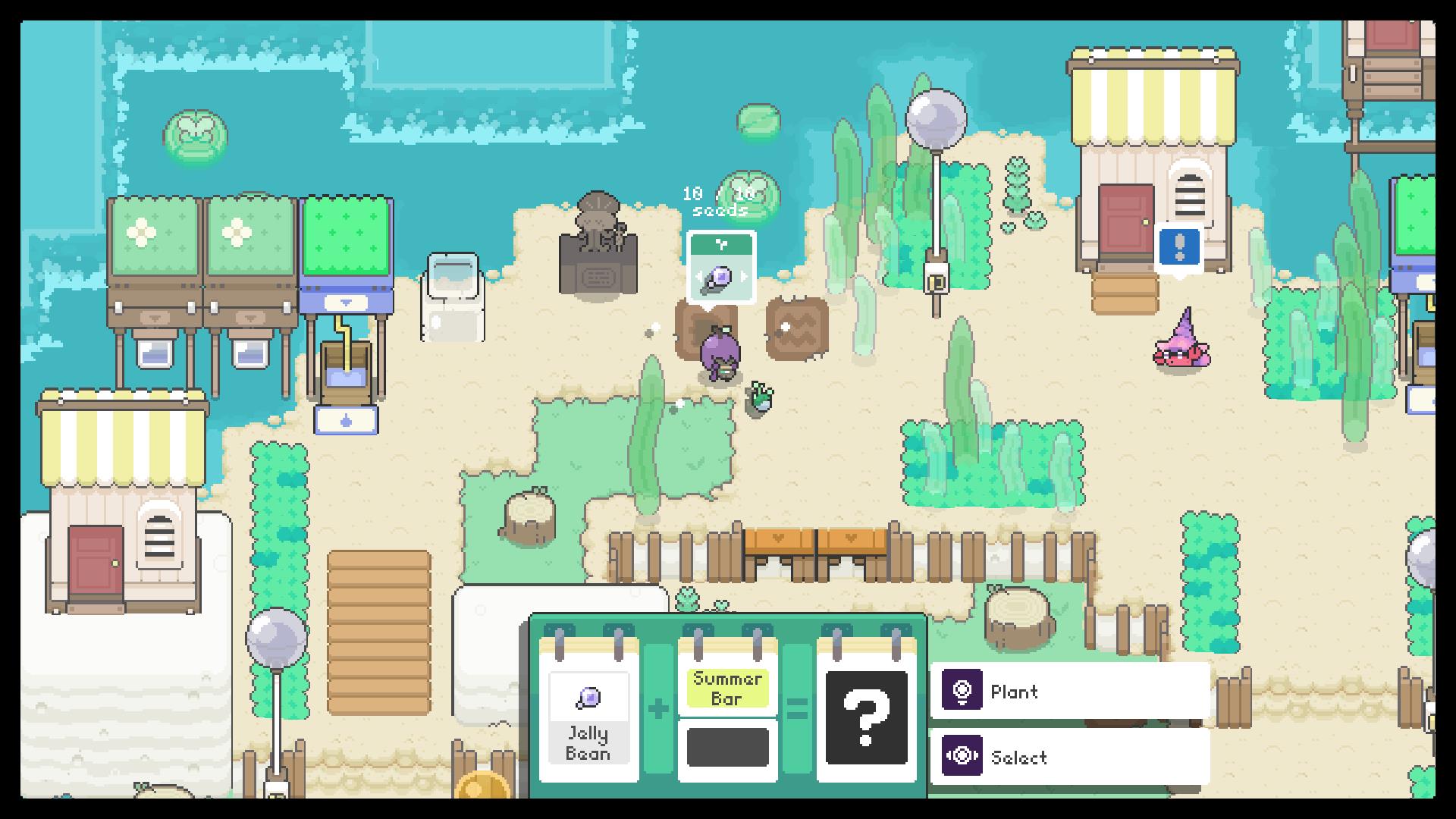 Some of the daily quests advance the story of Garden Story. Others don’t. Some even repeat, like having to fix a bridge again, and again, and again. You can eventually out level the need for the daily tasks. Unfortunately by that time I was a little bored from the repetitive nature of the daily quests. I know I should be grapeful for the chance to help my fellow fruit restore their towns to their former glory, but it was at the cost of my sanity to constantly repair that silly bridge over and over.

Concord journeys through four towns, each with its own different season theme: spring, summer, fall, winter. And in each town the rot has affected them, albeit a bit differently. As Concord makes his way through each town he’ll encounter a dungeon by the end of each stop, where he’s faced with taking down a boss. 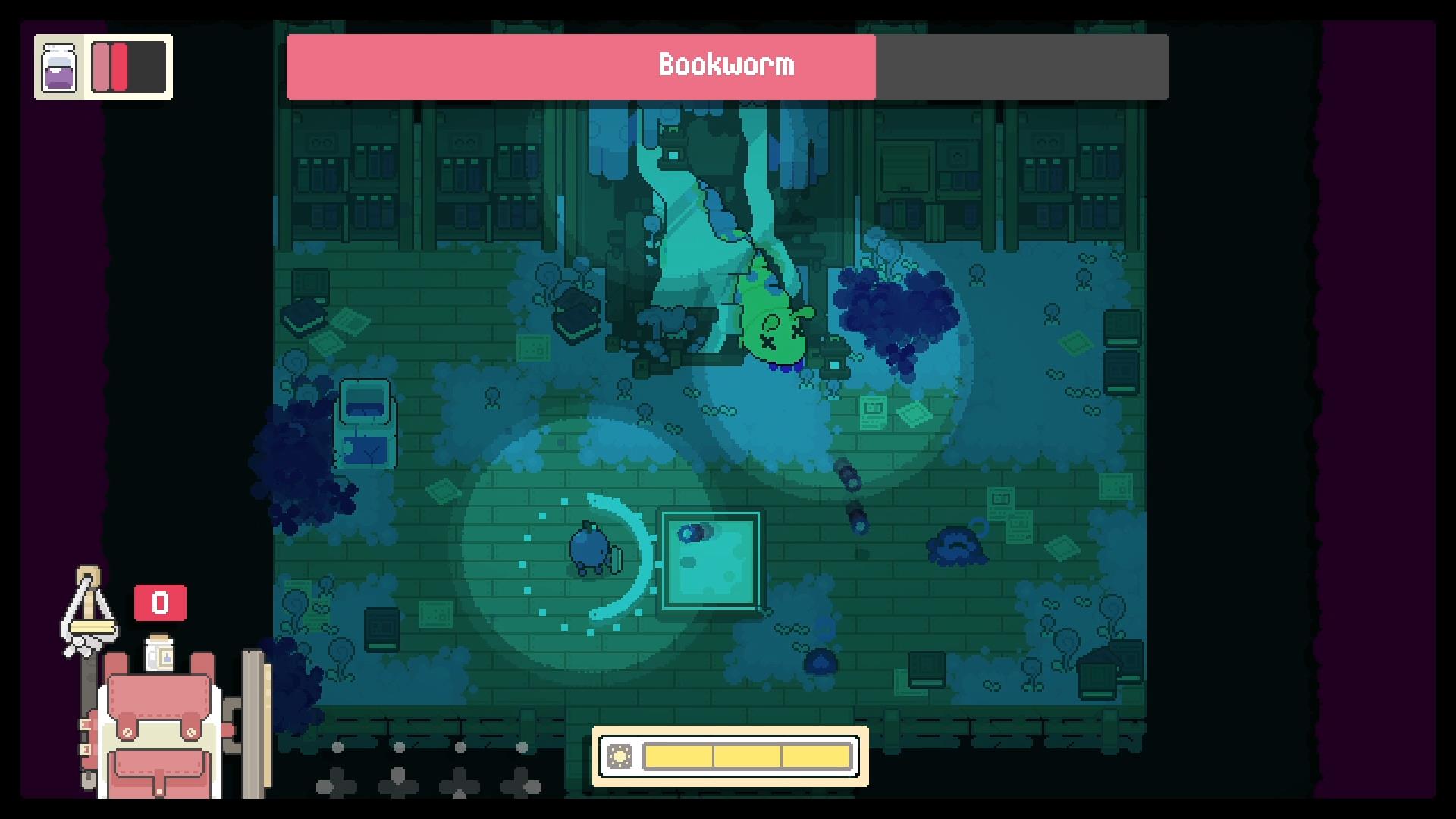 Dungeons and boss battles are a highlight of Garden Story, as combat is given the biggest focus in the game. You’re able to knock out opponents with a handful of tools, swords, hammers, and sickles to beat the rot to a pulp (catch that one?) in whatever style you like. Lime fairly certain that it did not matter which weapon I wanted to use, as most of them felt the same, except for the sickle. Because of that I didn’t see the need to level up more than a couple of my weapons. Having said that, I found the combat to be enjoyable, especially towards the later half of the game where my stamina was higher and I could do more activities.

Concord begins his journey as a young grape, and as such has a limited amount of health and stamina, both of which play a very crucial part of gameplay. Stamina does everything: sprinting, rolling, and attacking all require a bit of it. As you play through you gain memories from past guardians, which allow you to tailor your play style how you see fit. 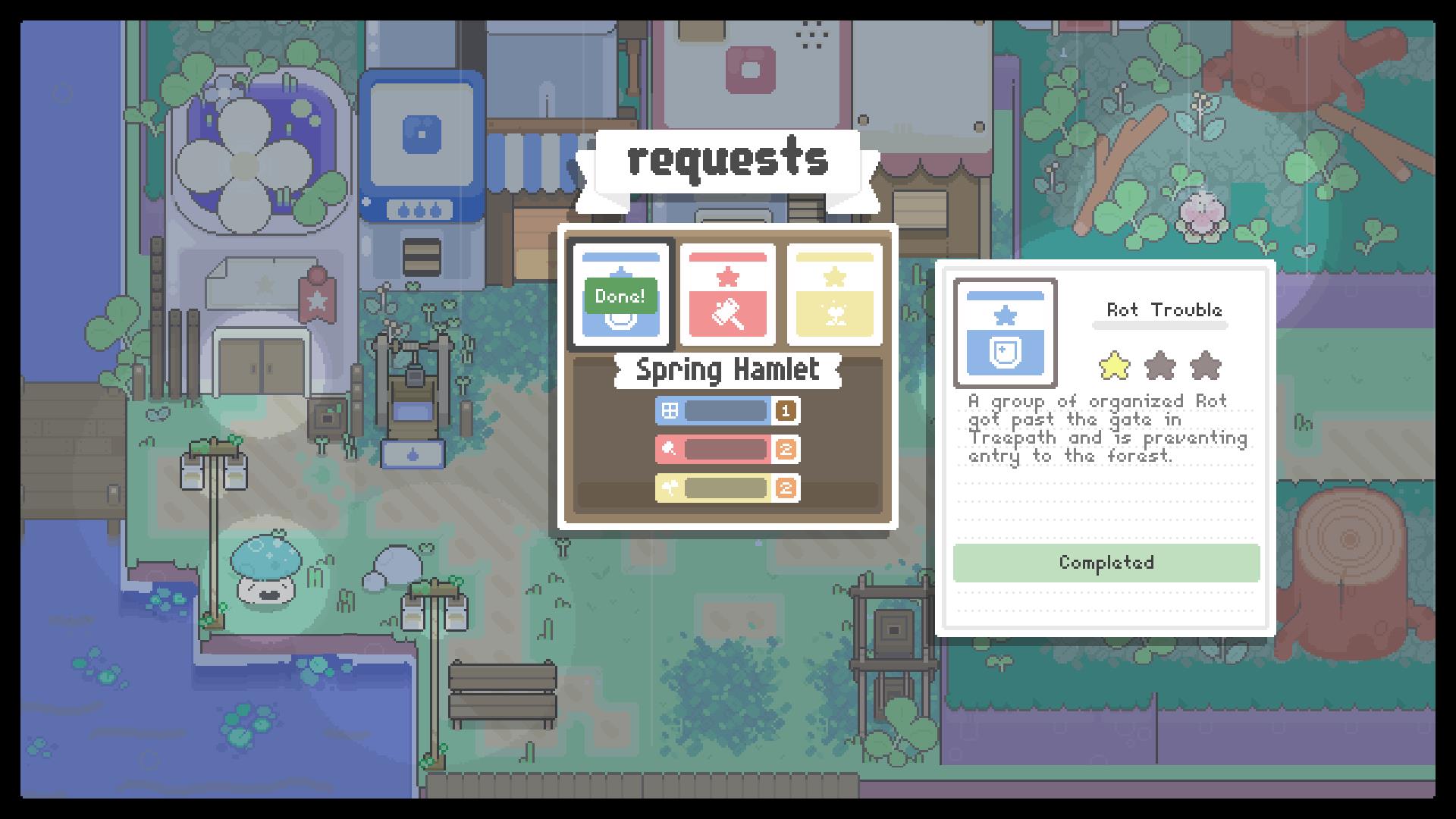 The selections are unique and interesting, I peel that there were a couple of memories that were required, and since you can only carry two at a time, I almost always went with more stamina and health. I liked the idea of drinking a potion to increase a stat for a time, but the boost never felt like it was worth sacrificing my health or stamina. Everything else felt secondary to those two stats. The same can be said for the potion, or dew, system. While not overly complex I feel that it takes itself too seriously. If it was just pruned down to the basics of healing and boosting stamina I would have been much happier.

Garden Story is not just about combat. There’s building, crafting, errand running for neighbors, as well as a day and night cycle. The key is to try and get your tasks done in the daytime when the rot is less active. If you find yourself doing chores come nighttime, then the rot has a much bigger, and more potent, presence. Other than the rot becoming a bit of a pain to deal with, there is zero punishment for Concord to do all his tasks at night. Unlike some games where you can pass out from exhaustion, once it becomes night time, it's endless until you choose to send Concord to bed. 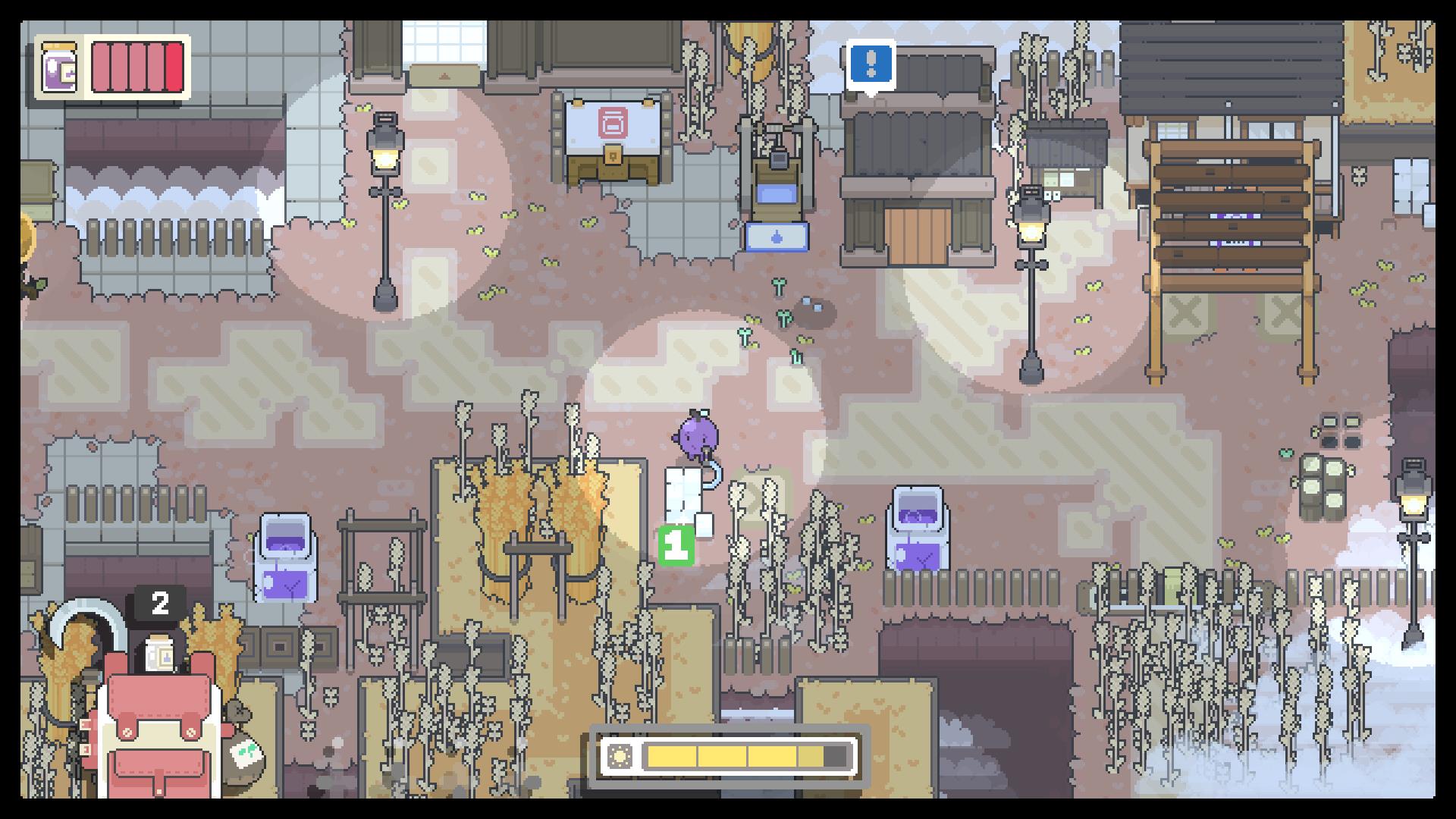 The ability to plant seeds as you play is also a mechanic that seems a bit overlooked. In the story you learn how to plant, and to progress the story you have to do so, once. After that it is left up to you, and there is no reinforcement of the mechanic. Not learning about it until I was pretty far into the game, and then it not becoming a core feature, I was turned off by the thought. Like the daily quests, after a while those became unnecessary chores, and planting never once caught my attention.

And for building it was basically the same story. I did a ton of repairing, but all the building is just an aesthetic. None of it is to progress the story. Apple polish (*a bit of—it’s getting harder for me to come up with new ones, ok?) to these mechanics to make them a bit more necessary would have been nice, but they all felt like a bit of an afterthought, or as a way to create more content to and some length to the game. 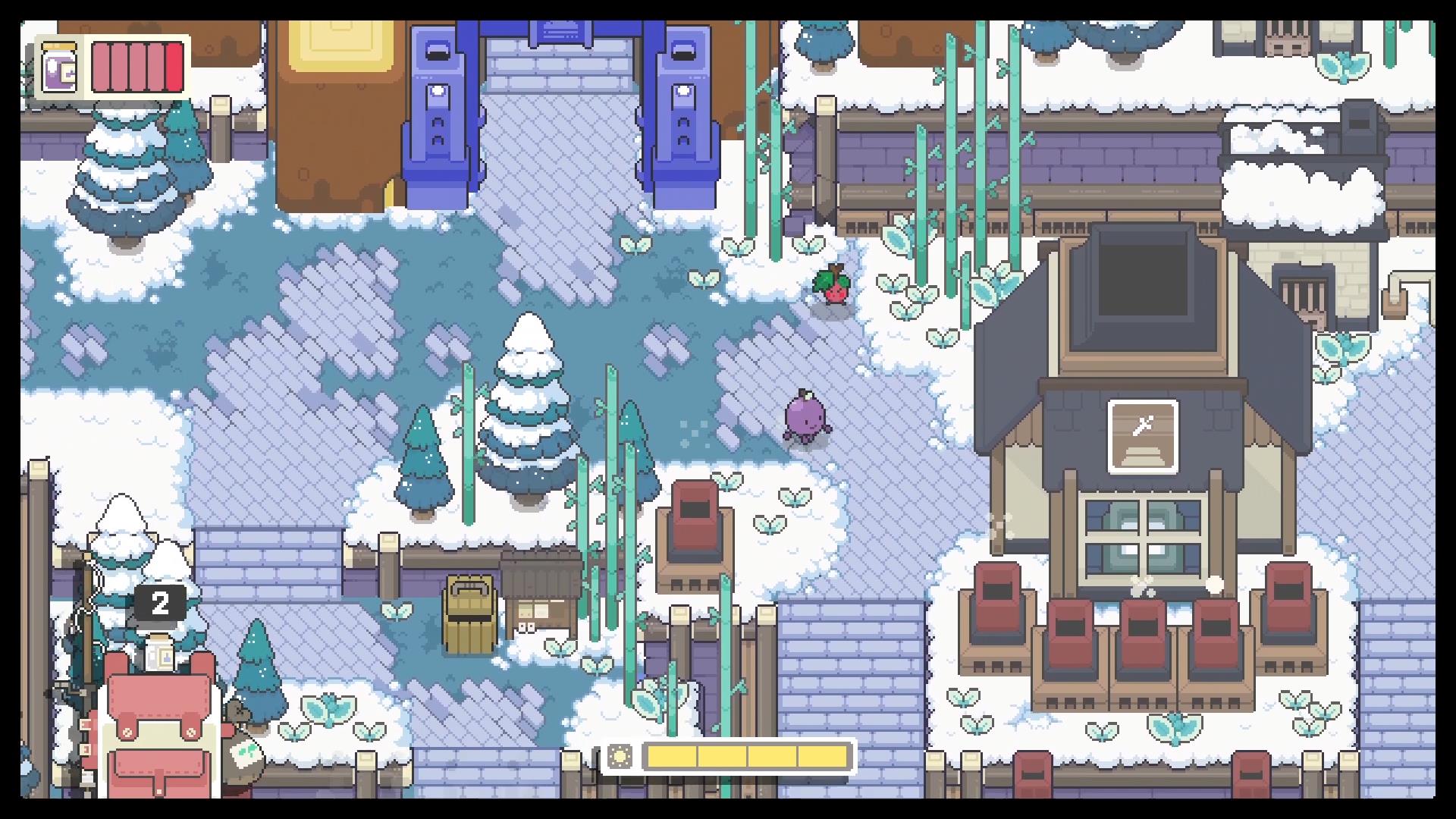 Nothing wilts on the vine when it comes to how Garden Story looks. The look, feel, and sounds are fantastic. The 2D, top down world you are put into is full of color, even at night. The sprites all look great, and even though the rot monsters don’t get much harder as you progress, the art style improves from town to town. Along with the looks is the great soundtrack. Songs are unique and catchy as you travel the world, and I found myself actually taking a second to notice the music as I was playing, which, for me, is something I very rarely do in video games.

Garden Story focuses too much on the combat. While the combat and dungeons are great, there is too little polish on everything else. The building, planting, and memories system are a good start, but not enough to keep me engaged throughout the whole tale of Garden Story. By the third town I'd had my fill and couldn’t raisin enough energy to complete the game with the same enthusiasm I had in the beginning.

Garden Story is not the apple of my eye, nor is it rotten. I enjoyed my time helping Concord clear the rot, especially with the boss fights, but by the third town (out of four) I felt I had picked more apples than I could eat in a week. Dungeons were exciting, but the other mechanics left a sour taste as they were introduced too late to matter and became another mechanic I could easily ignore. Garden Story simply was not my jam.