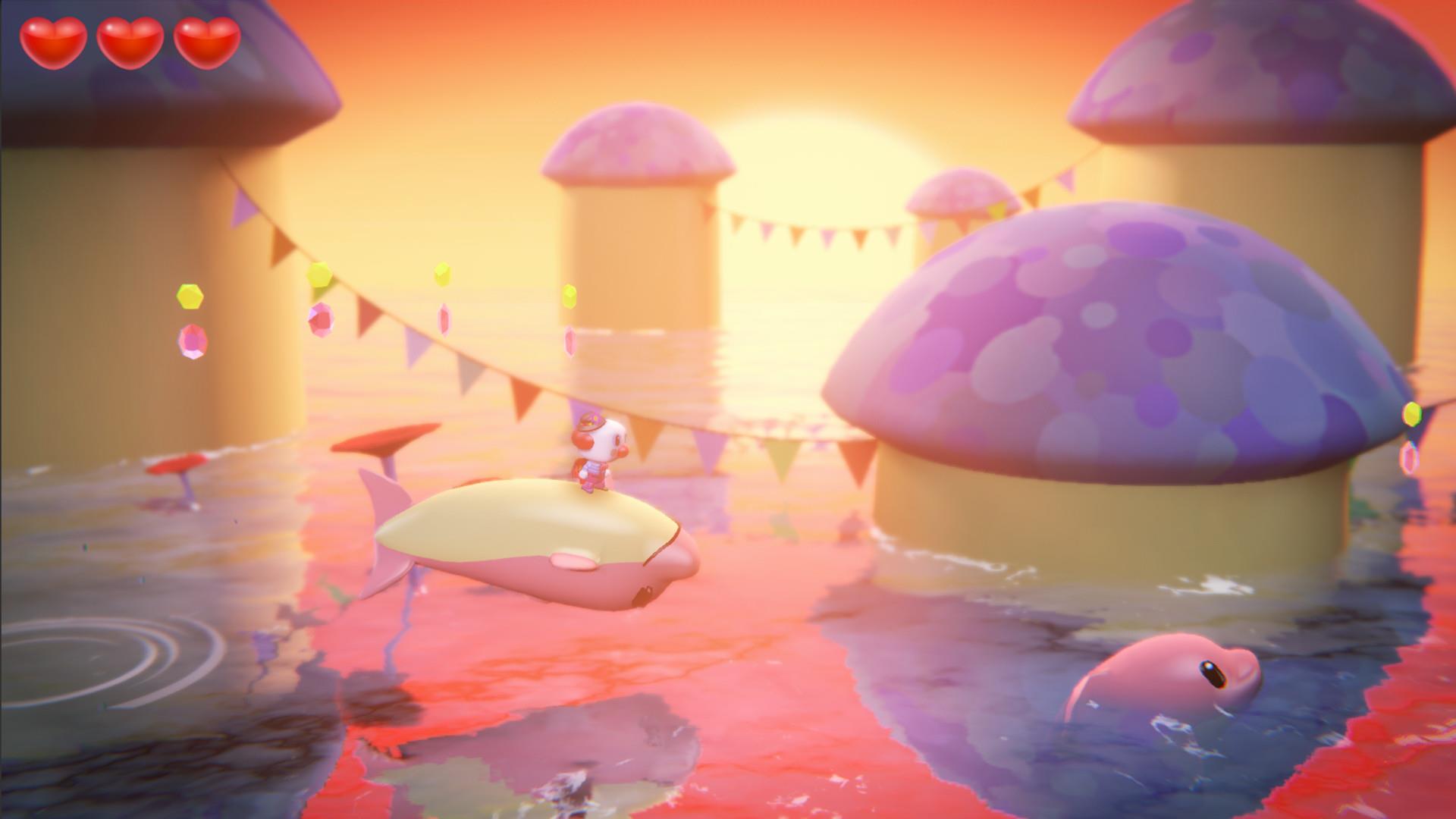 I’ve had a lot of fun with Ayo the Clown leading up to the game’s release, writing a continuing series of little articles attempting to discern whether Ayo is a cute, happy clown or a creepy, murderous clown. Of course, I was given little reason to believe that Ayo would be evil, beyond the fact that he is a clown. But something about the tone of the trailers made me slightly suspicious that Ayo might not turn out to be the sweet, adorable mascot he was made out to be.

It turns out that this was all projection on my part. Outside of a few slightly creepy still images used during cut scenes, there is very little insidious about Ayo, who bops through his little adventure with good spirits, making endearing little cooing sounds when he jumps or gets hit. If anything, Ayo is even more cute that I could have hoped, and his cheerful search for his missing dog only gives him more opportunities to prove his good intentions.

The story of Ayo is communicated in about 15 seconds during the game’s opening. Ayo discovers that his beloved dog is missing, and ventures out into the world to find him. That’s really kind of all there is, but platformers have certainly been built on less. Ayo’s world is full of life and fun, with animated cartoon characters milling about and entertaining new takes on standard platformer mechanics. Tilting ramps, for example, are giant flat baby heads that squeal when your weight tips them one way or another. The entire game feels somehow familiar yet fresh, like a Yoshi game that came sliding in from an alternate dimension.

Indeed, everything about Ayo the Clown should be familiar to fans of Nintendo platformers – from the level-hopping over world map to the sheen of the well-drawn background. Ayo bounces from level to level, picking up new abilities as he goes. Interestingly, Ayo can’t even jump at the beginning of the game, instead relying on bounce pads to get to where he needs to go. 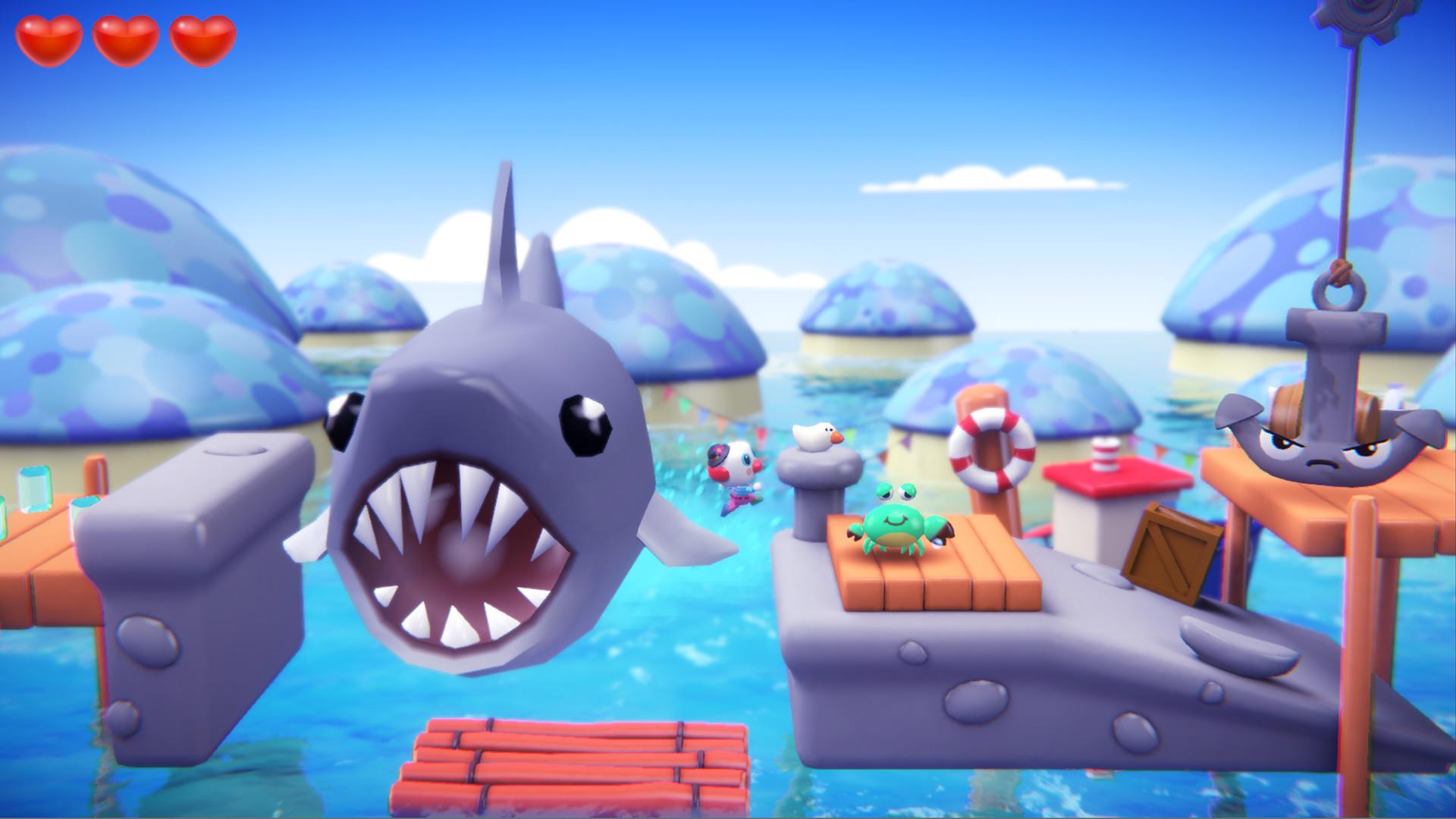 But one by one, new powers are gained as he progresses, sometimes purchased, sometimes given in return for helping some of his clown-world buddies with various short tasks. Before long, Ayo will be wall-jumping, sliding, and ground pounding with the best of them. My favorite of Ayo’s abilities is his red balloon, which gives him the ability to hover after making a jump, or even propel himself slightly higher in an interesting take on the traditional double-jump.

Beyond his inherent abilities, Ayo can pick up weapons that are scattered about the levels. But to be honest, I mostly ignored these weapons as I found them to be more frustrating than helpful. Weapons disappear from your arsenal the first time you get hit, and the animations to use them are a smidge longer than I would have liked, making taking on multiple foes with your balloon sword a bit more dangerous than simply jumping over (or on) enemies. 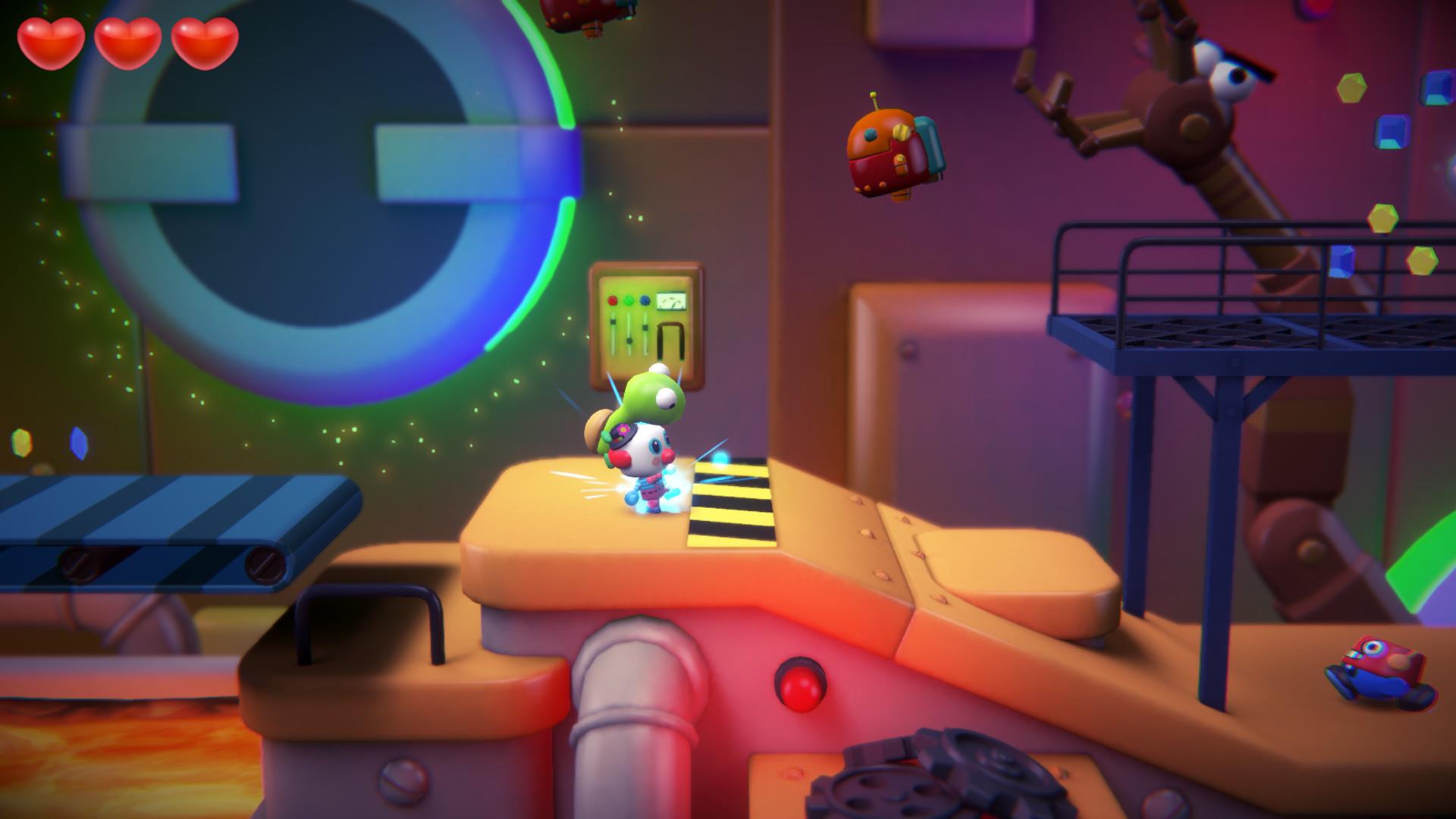 Of course, beyond weapons Ayo also collects jewels (what would a platformer be without some little doodad to collect?). Luckily, these actually have a use beyond simply piling up on an ever-escalating ticker. Early in the game a little town opens up, where Ayo can visit and purchase upgrades. I did find most of these upgrades to be disappointingly expensive, causing me to put them off until very late in the game, which does take away some of the feeling of progression. But it is still nice to have a reason to swoop around picking up jewels other than just amassing digital riches.

Level design is where Ayo the Clown truly shines. Levels are far from linear, tempting the player to explore and use Ayo’s powers to seek out new secrets. Everything in the levels is bright, fun, and attractive, with entertaining environmental obstacles sprinkled throughout. Goofball storybook characters abound, making the game absolutely appropriate for smaller kids to watch. 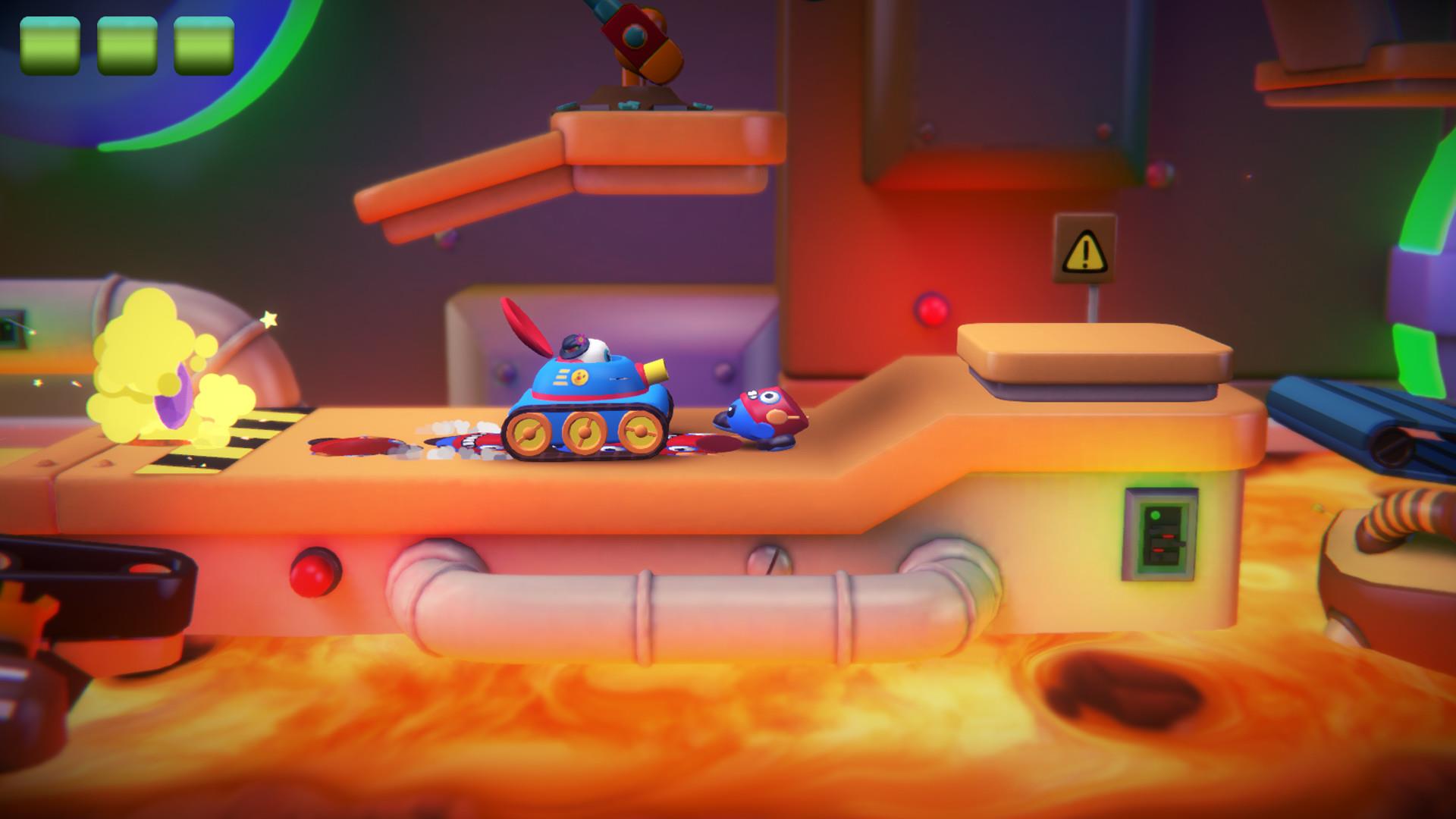 I say “watch”, because despite its kid-friendly appearance, Ayo the Clown does escalate in difficulty fairly quickly. While the game is on the short side (probably about six hours for an experienced player), I could see younger players becoming frustrated with some of its challenges and bouncing off. This is not a knock against the game; difficulty isn’t inherently a bad thing. More a word to the wise for parents – you probably won’t be able to just hand your kid the controller and let them play Ayo on their own beyond the first five levels or so.

Ayo can take three hits before losing a life, and he has three lives before he gets punted from a level and back to the world map. In-level checkpoints only work so long as you have lives left; otherwise, it’s back to the map. This can lead to situations where a player rails against a level and reaches a boss fight at the end with only one life left, and then has to run through the entire level again when they are killed. This is standard procedure (maybe even a bit lenient) for old-school platformers, but modern games might flinch when they can’t just keep going from the closest checkpoint. 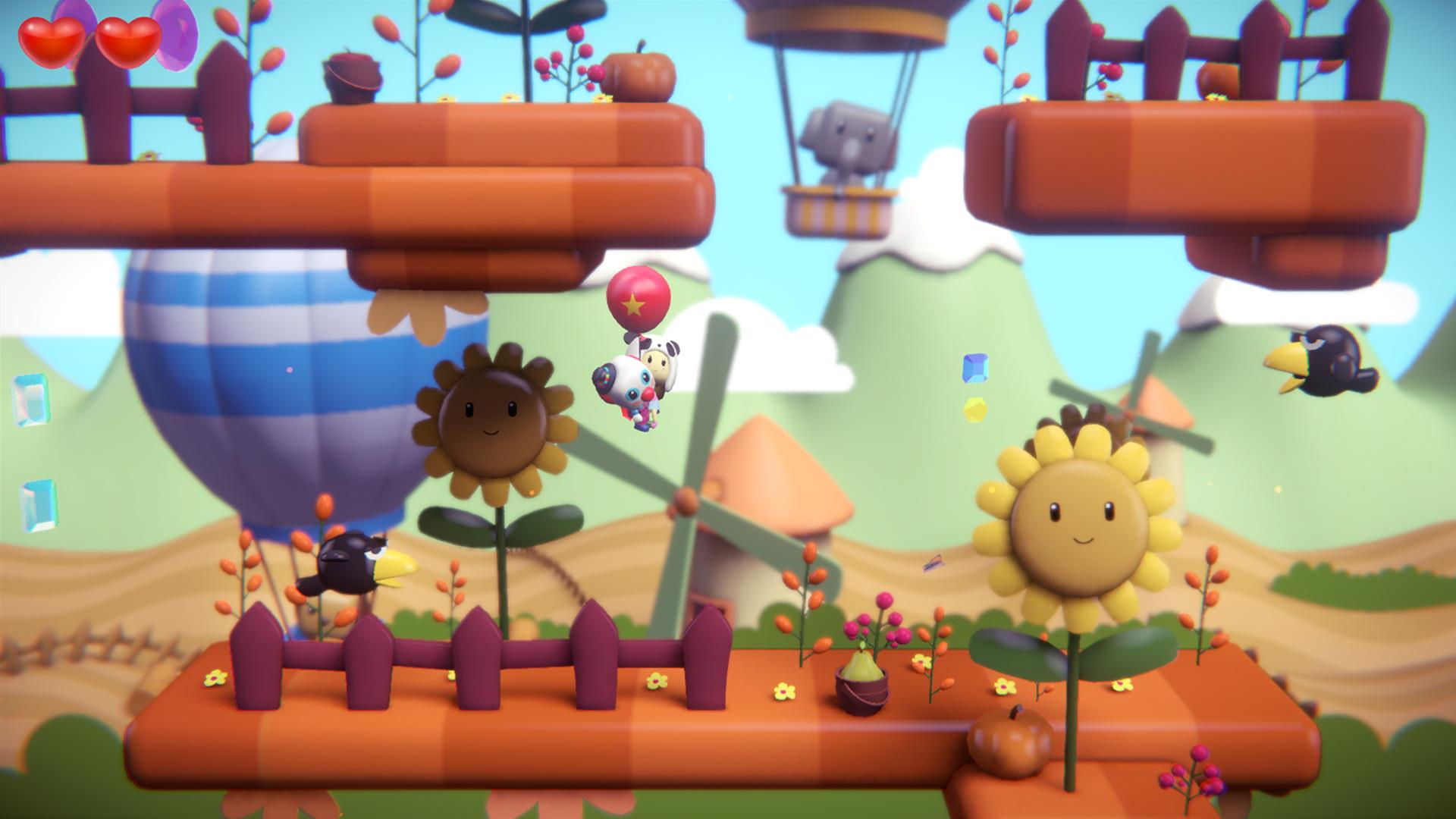 Despite (or maybe because of) its adherence to old-school tropes, Ayo the Clown is a surprisingly solid first effort from developer Cloud M1. Squint, and you could believe you were looking at a Wii-era Nintendo game, which is no small achievement for an indie developer. If you are a Nintendo fan that enjoys SNES through Wii-era platformers, sitting around wondering why they don’t make them like that anymore, then Ayo the Clown might be here to rescue you AND his dog.

Ayo the Clown is a fun, light platformer with origins that can be traced directly back to any number of Nintendo classics, putting it in esteemed company. Though the difficulty might be a bit much for the smallest kids, Ayo the Clown is a light-hearted, family-friendly game that deserves attention from platformer fans.