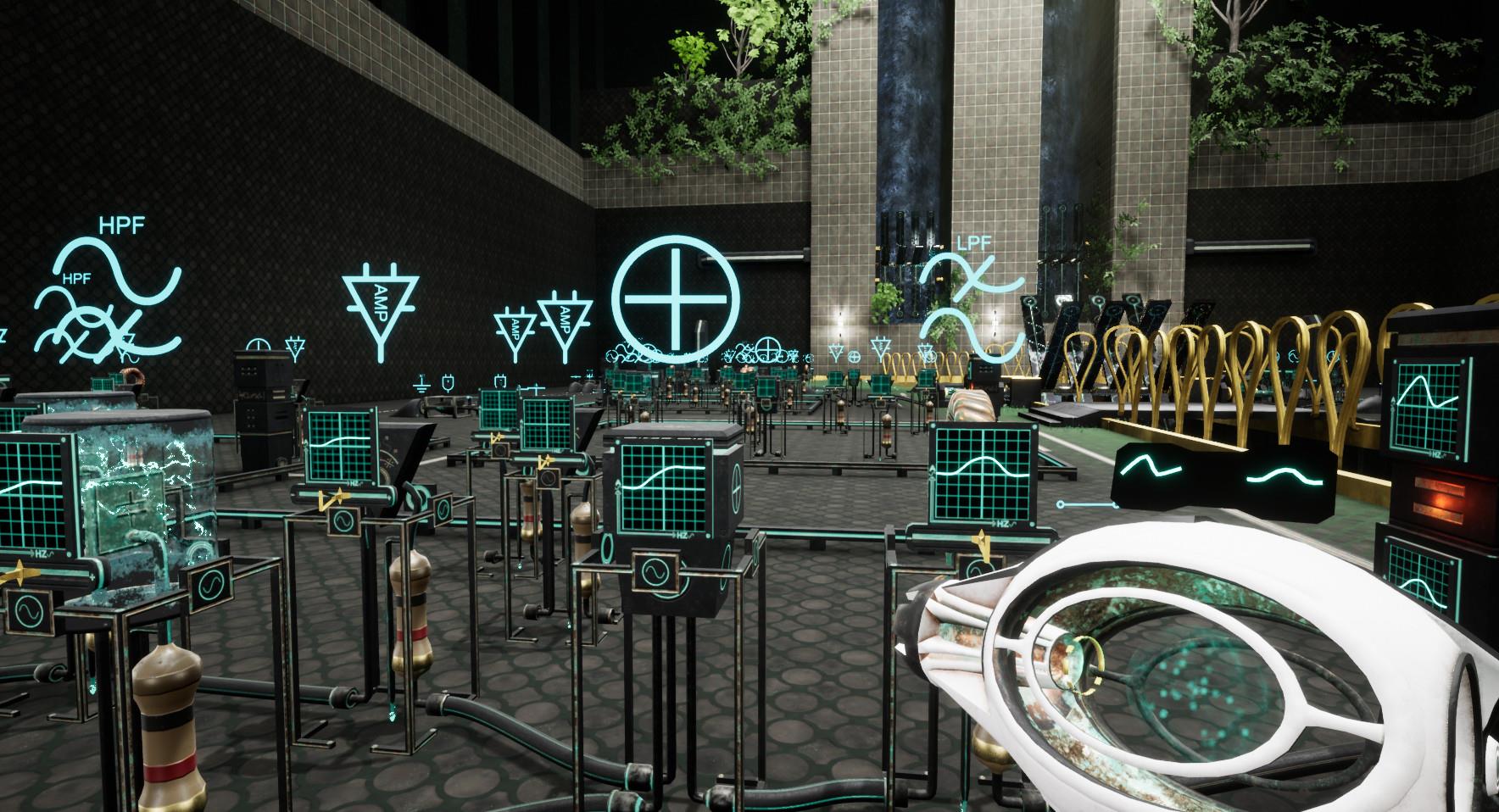 Logic puzzles were some of the more interesting and enjoyable diversions I remember from my Computer Science bachelor's degree. Sure, I learned how to program and turned it into a career. But logic puzzles, binary multiplication, and learning to count to 1023 on ten fingers were probably my best takeaways. Logic puzzles, or more specifically logic gates or logic circuits are the core of The Long Gate. For a CS nerd like me, it's right in my wheelhouse. For the uninitiated, the rules are fairly easy to understand, they're logical (obviously), and the game will walk you through the objects that make up this new world as it introduces them. In it's simplest form: 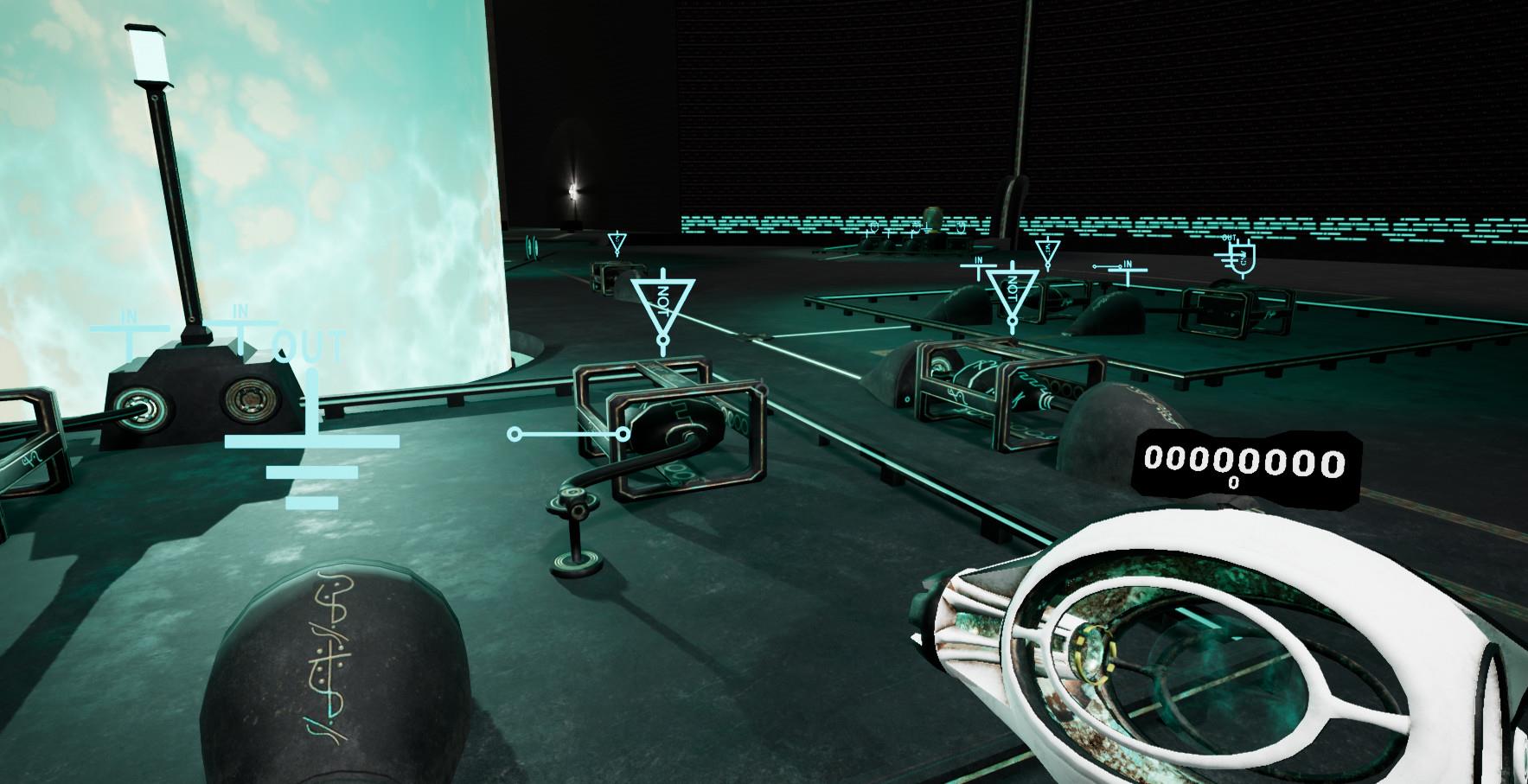 Think about 1 is on, and 0 is off. On the other end of the AND gate, for the gate to be on, then both must be on. For an OR gate, you just need one or the other. NOT gates just switch 1s to 0s and 0s to 1s. NAND and NOR are NOTs combined with one or the other. The rest flows from there.

If all this game was to be were logic puzzles, then it would be a nice little brain teaser playing by consistent rules into a neat, but niche, package. But it tries to be so much more because this core logic loop is wrapped in this vast, fantastical world. The puzzles do not exist in isolation but as larger mechanisms of this expanding space. One puzzle opens the vault and behind it an elevator with a new puzzle required to ascend each level. Everything is adorned in a mix of Tron-like fantasy in neon highlights wrapping the familiar comforts of block, stone, tree, and earth. It doesn't try to lose itself in narrative because it lacks the facility to actually narrate, but it does expand the space and present this feeling that you are part of something mysterious and larger than yourself. It does both of these things individually well: intricate puzzles and creating an atmosphere of wonder. What ultimately fails is the marriage of the two. 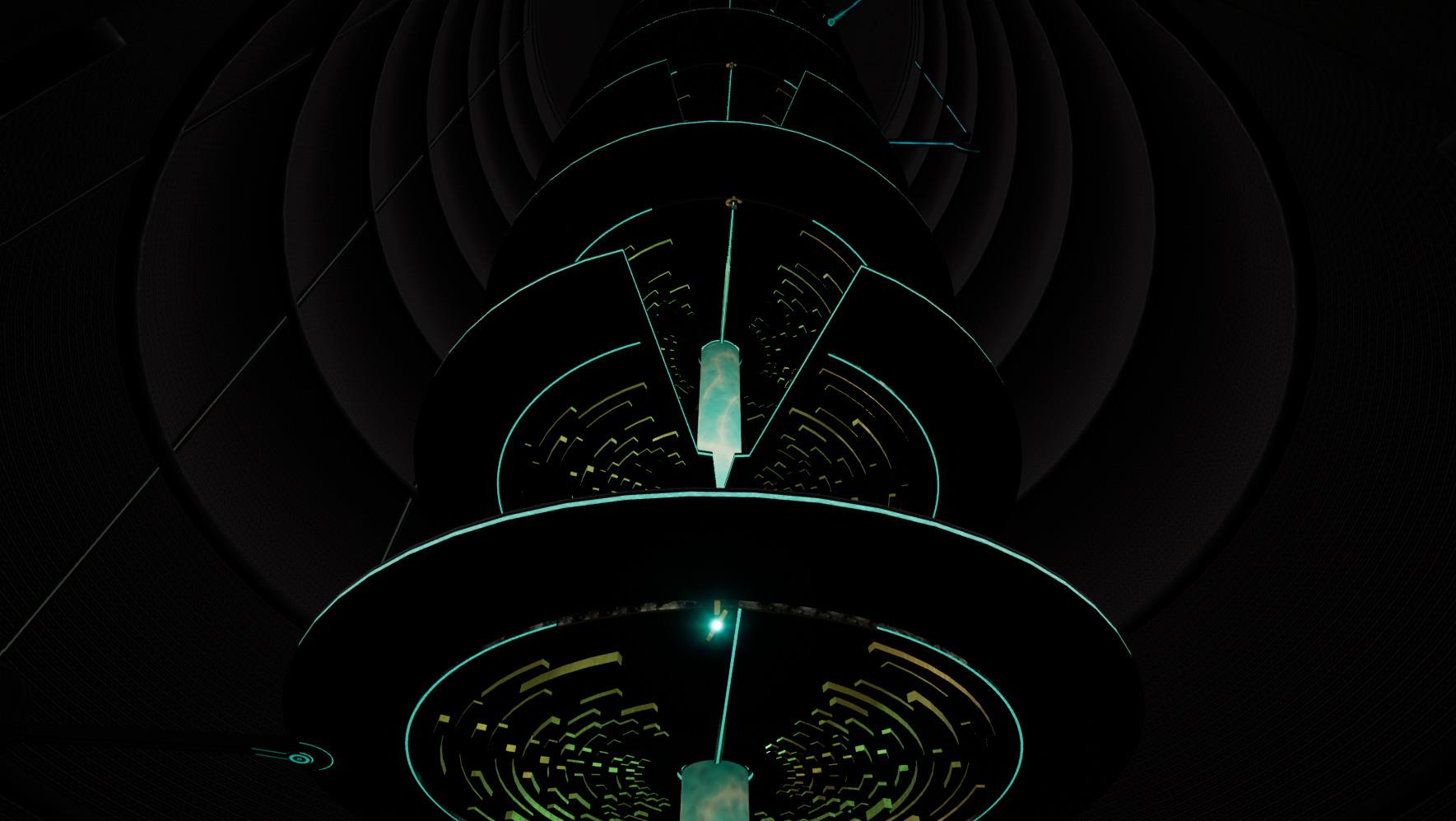 Because logic puzzles just shouldn't be the sole focus of a first-person adventure game.

Whatever this genre is—FPP? First-Person Puzzler?—It is, at best, simply not for me. The first cracks began with my first puzzle, and the realization the the control scheme is a constant source of awkwardness. I think my primary frustration stems from my dedication to inverting my y axis on all first-person games. This is the way. But this becomes the awkward way when staring down at the floor to place a gate. You've transitioned from a first-person experience into a top-down puzzle within that experience. When every first-person game you've ever played cries out for one control scheme and every puzzle game you've ever played employs another, there is an inevitable clash when the two meet...and it just doesn't feel good.

Maybe I'm just spoiled of late. The last three games I've been playing have been Doom Eternal, Hades, and DeathLoop. Three games that have all scored as some of the top games in any library; but with the Long Gate, I kept finding myself struggling even to jump back in. I kept reaching for those others as the experience of opening up The Long Gate started feeling more a chore than a joy. Eventually, I settled in. I started to not notice the control scheme so much and digging in to the puzzles, but that's when I ran into the next wall—the great distance some of the puzzles transpose themselves over and the pains it takes to cross those distance.

Puzzle games are meant to hide the solution through thought, analysis, and clever combinations of game rules. And while The Long Gate does follow this maxim, it also hides its solution behind the vastness of its world, and that becomes cheap. What I mean is, because these circuits are splayed out across such a large space, you artificially obscure part of the circuit by placing the feed far enough away from the next step or stage.

For example: there is a button to click that toggles two beams. I have to jog half a football pitch one direction to find the next step on the one track or the other half of the pitch in another direction for the next step on the second track. Now I'm not only figuring out the logic of the circuit—the true task at hand—but I'm also tasked with figuring out a way to keep these three locations in mind and constantly wasting cycles jogging back and forth to work out the solution. I forget my place, backtrack, re-test, and find myself doing all sorts of mental gymnastics that just feel artificial as a standard part of the play loop. 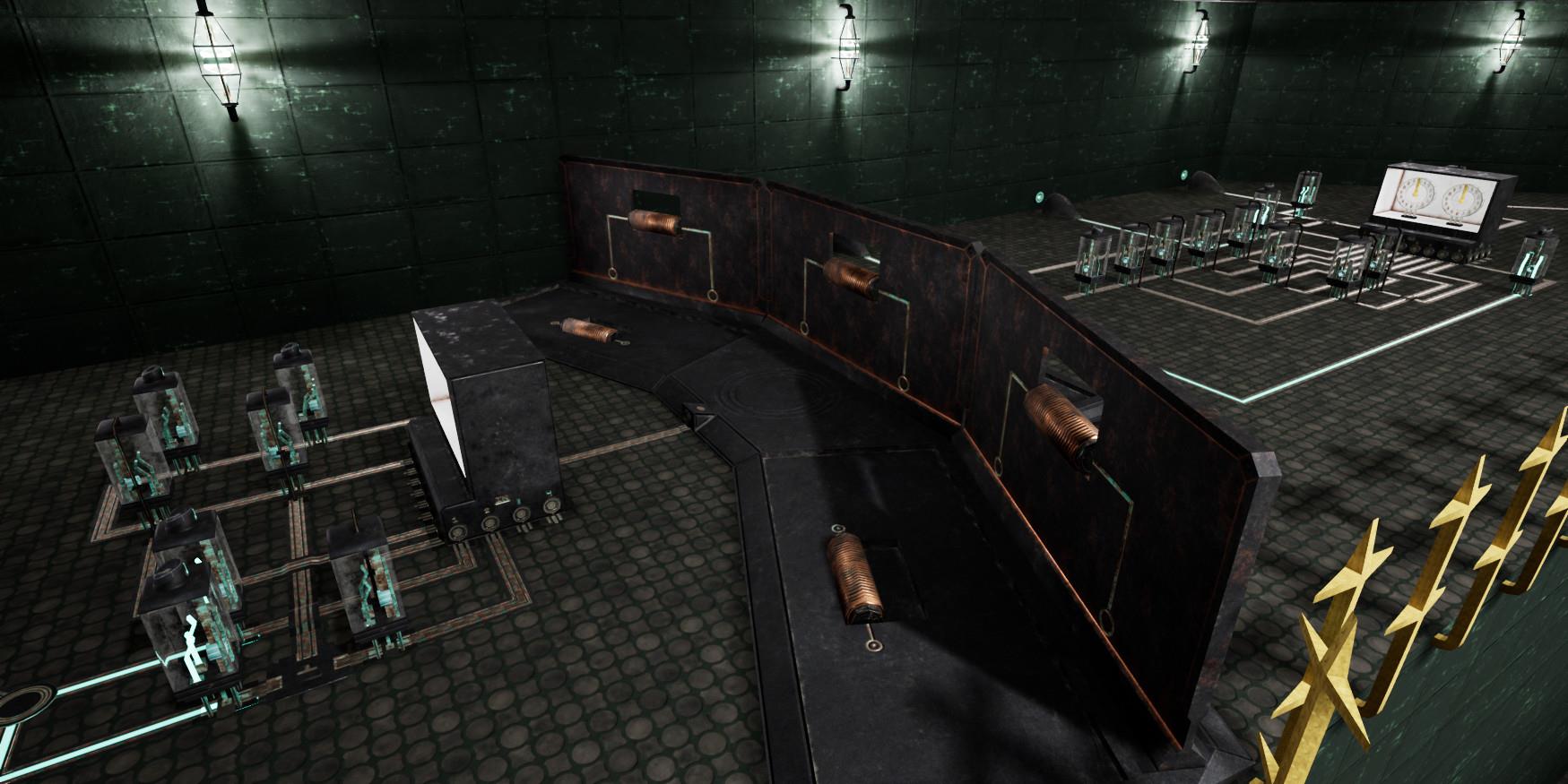 The end result is I become convinced that I would be better served simply grabbing a pencil and copying the circuit down on a piece of paper than doing all this running back and forth. But if I'm going to end up on pencil and paper, why did I turn my Switch on in the first place? I should have just bought a logic puzzle book from Amazon.

The game does do a great job of bringing isolated puzzles together in the larger world, but places these same puzzles splayed too far across that same world. It build levels of interlocking tiers and there is always this sense of a larger arena around you as things interconnect. Sometimes it is refreshing to step back and gaze at the wonders of this bigger picture, not to get lost in the myopic test in front of you but to appreciate something bigger than you. These moments are unavoidable when moving from one puzzle to the next. This magical place just unfolds in front of you. But sometimes these visions become unnecessary catharsis when simply frustrated in the middle of a solution by some of these awkward issues that pop up. 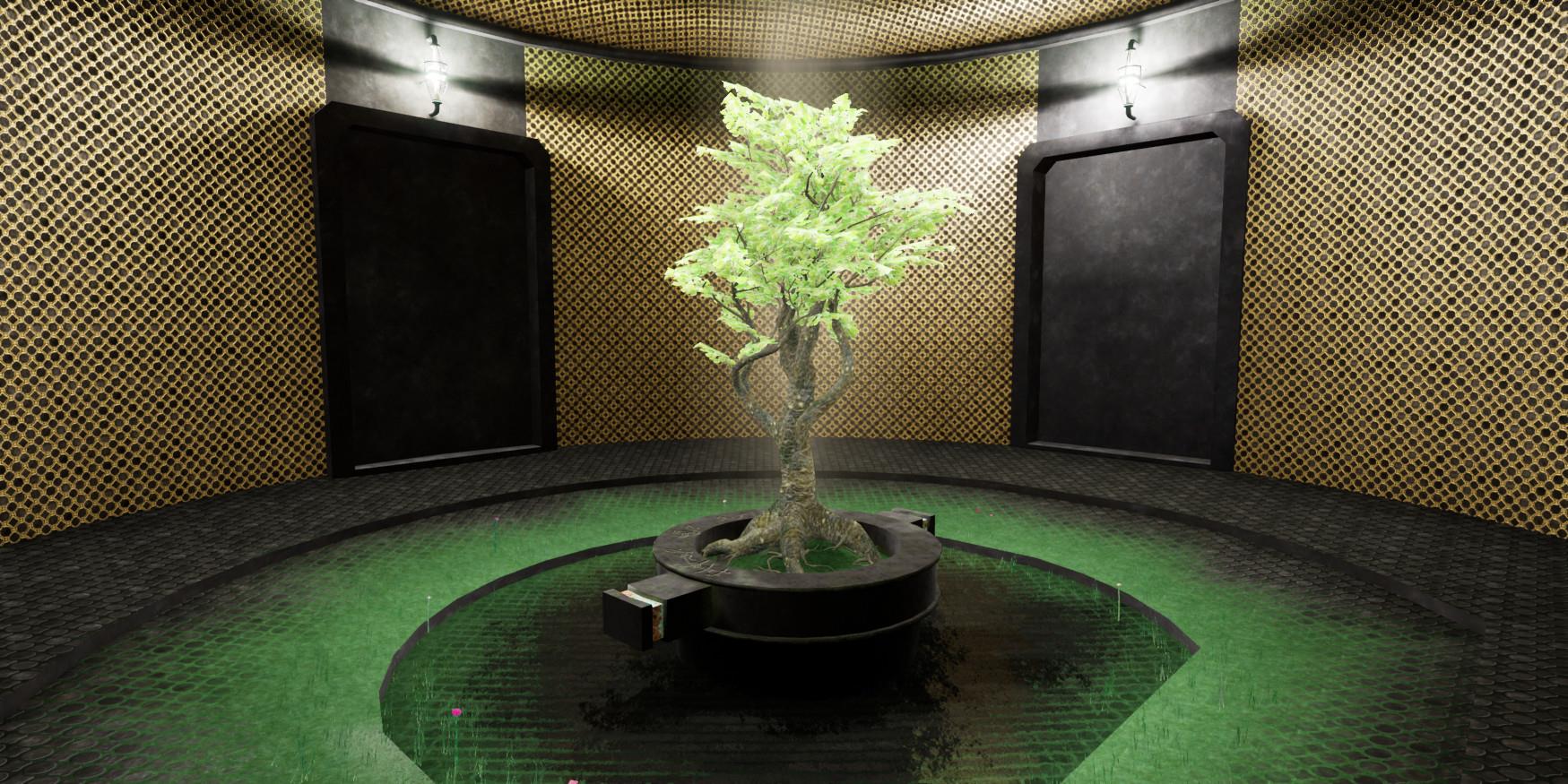 What troubles me about submitting this review is a desperation to ensure I am being fair. I struggled with my playtime overall but I was hung up within the first few minutes about inverted controls needing to be...verted? I struggled with the constant jogging back and forth with puzzles that were too large to present cohesively. But are those struggles really flaws or just my own hang ups? I can't say that someone who was not a dedicated y-inverter like myself, or maybe in its original form on PC on mouse and keyboard, maybe that first critique might be entirely absent. Maybe another, more permissive of walking simulators, might find the back and forth and being lost in a visually appealing larger environment a blessing instead of a curse.

I came for the puzzles but was thwarted by the control scheme and the trappings built around them. If you're a different type of player, then please measure this verdict with the appropriate grain of salt. But for me, I can say that the logic puzzles and the game world, while both excellent, make for a terrible match.

The Long Gate took the fun parts of my Computer Science degree and mashed it back in with the tedious stuff. The puzzles are good, the world built around them is fantastic, but the marriage of the two is one destined for divorce. This type of first-person puzzler just doesn't work for me. Keep the First Person to the Shooters, and keep the puzzlers top down. I commend the attempt and vision of the game, but for me it was a combination doomed to fail.