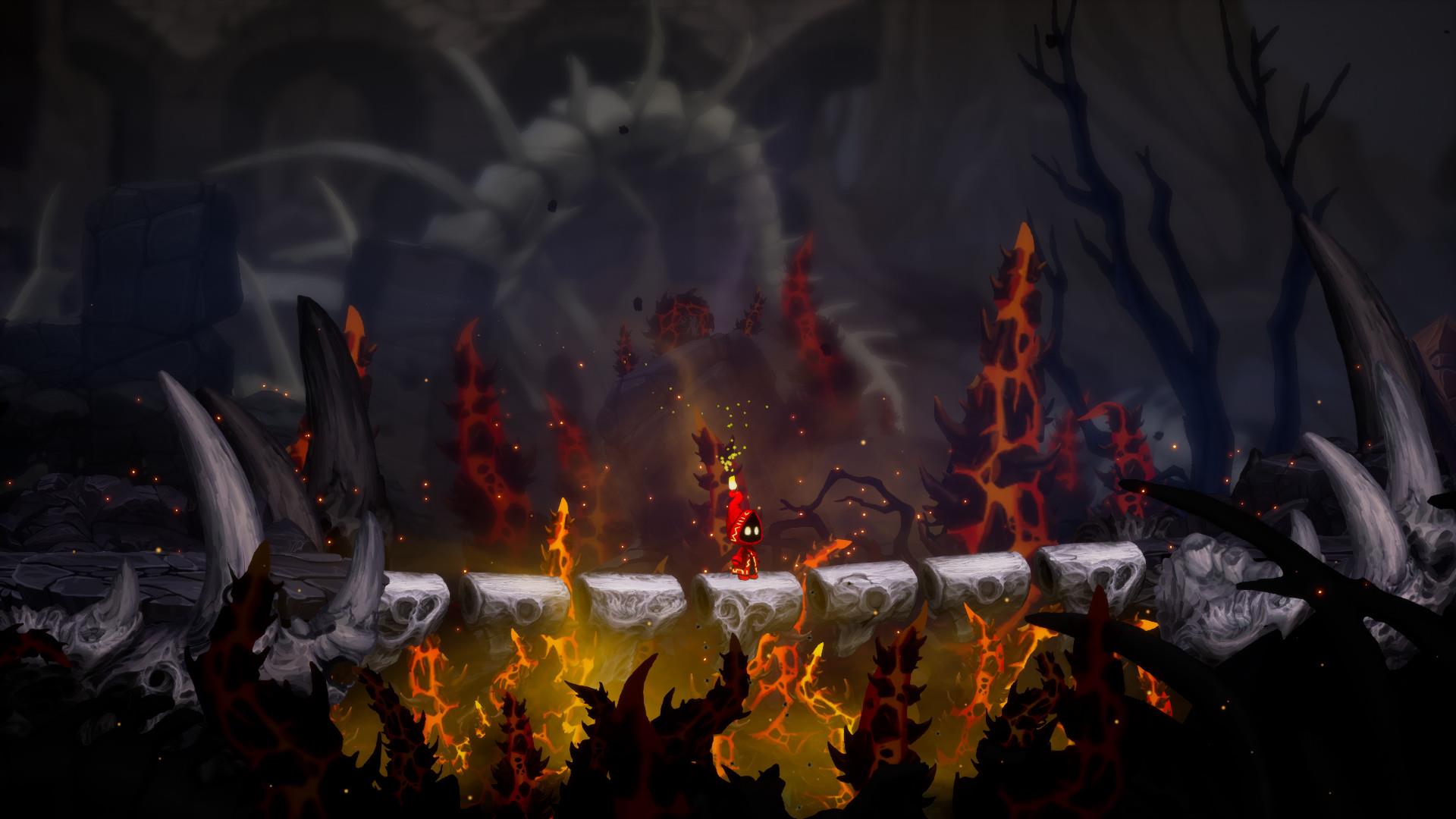 Written by Russell Archey on 8/11/2021 for SWI
More On: Unbound: Worlds Apart

I’ve been enjoying Metroidvania-style games for a long time. I’ve even reviewed a few on here in the past. There’s just something about the exploration of a wide-open area, reaching a dead end, and then finding a new item or power that lets you progress past that prior roadblock that keeps me coming back to new games in the genre.

Unbound: Worlds Apart takes the Metroidvania formula and mixes in portals…though not quite the kind that lets you jump from one place to another in an instant. Rather, these portals take part of your current world and open up another world on top of it. Trust me, it’ll make more sense as we look closer. 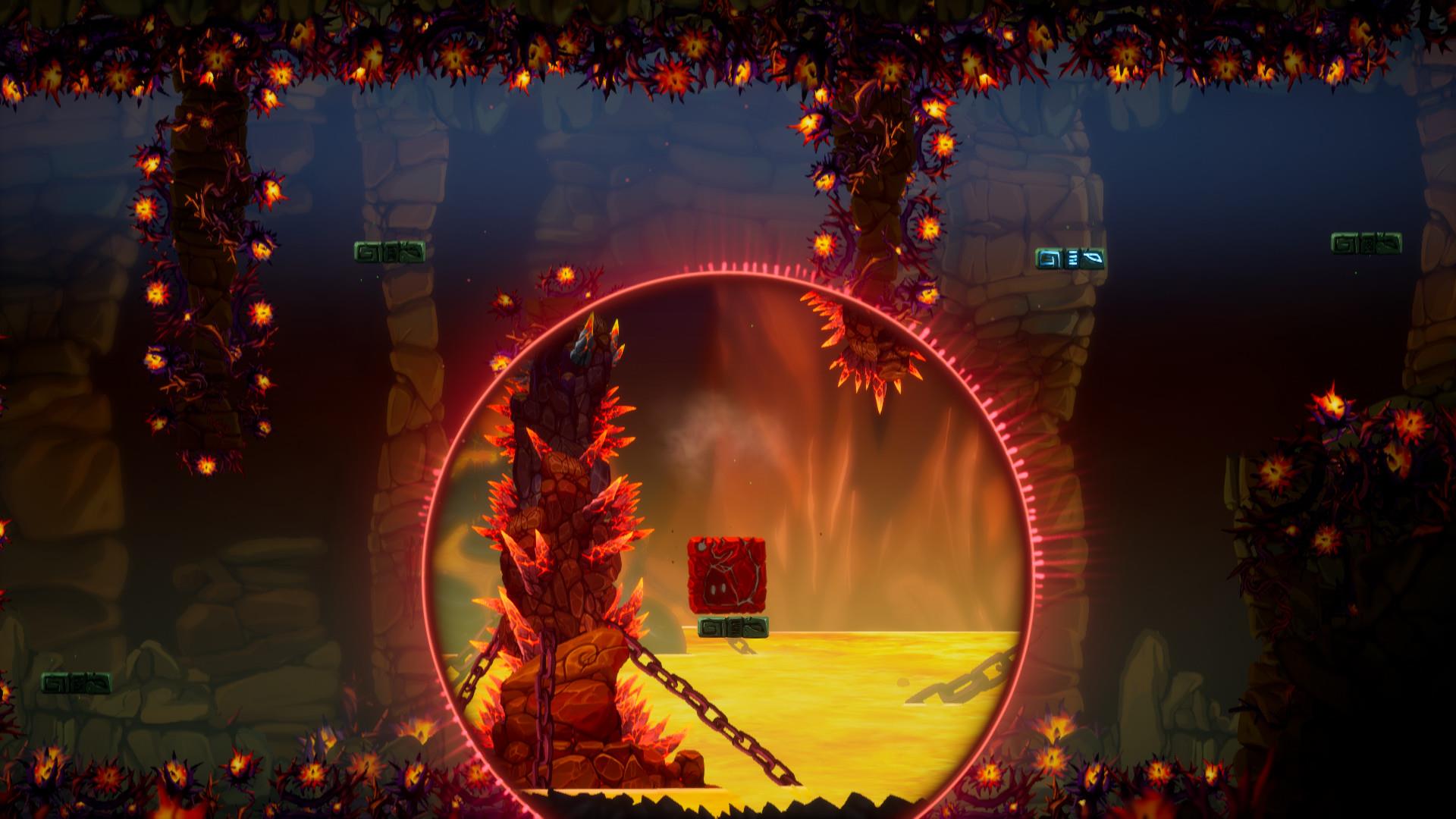 You play as Soli, a small mage from the world of Vaiya which is falling apart due to an evil force. Typical. But while Soli may be small he’s pretty adept at using portals. These portals don’t necessarily teleport you from one point to another, but rather you open up a small portal to another world which alters your surroundings. You’ll run across other mages who’ll give you some advice or task you with finding various shards to unlock the next area you need to go to. Eventually you’ll open up the path to the world of Umberra, home of the Demon King who’s causing the corruption, in an attempt to end the corruption once and for all. Again, typical. But if it isn’t broke, don’t fix it.

Unbound is a Metroidvania puzzle-platformer where the main mechanic is the aforementioned portals. When you first start using them you’ll notice that it does open up a portal to another world, but instead of jumping through it, the portal kind of changes your surroundings for a certain radius from where you opened it. The effects of the portals will differ depending on your current area.

A lot of the time you’ll affect enemies in some way, such as turning fireballs into stationary platforms, sometimes into blocks needing to push switches, and sometimes you’ll even reverse gravity. Portals can do all sorts of things, but unfortunately you won’t really have a choice in what they do. Don’t worry though, that’s not a bad thing.

As you progress you’ll come across some small archways that, when you pass through them, you’ll either be given the ability to open portals or lose that ability, meaning some areas have to be traversed portal-less. Some paths won’t be traversible until you find various abilities such as a mid-air dash, double jump, and wall jump. As you gain these abilities you’re able to go back to those areas you couldn’t pass through before and gain access to new areas. 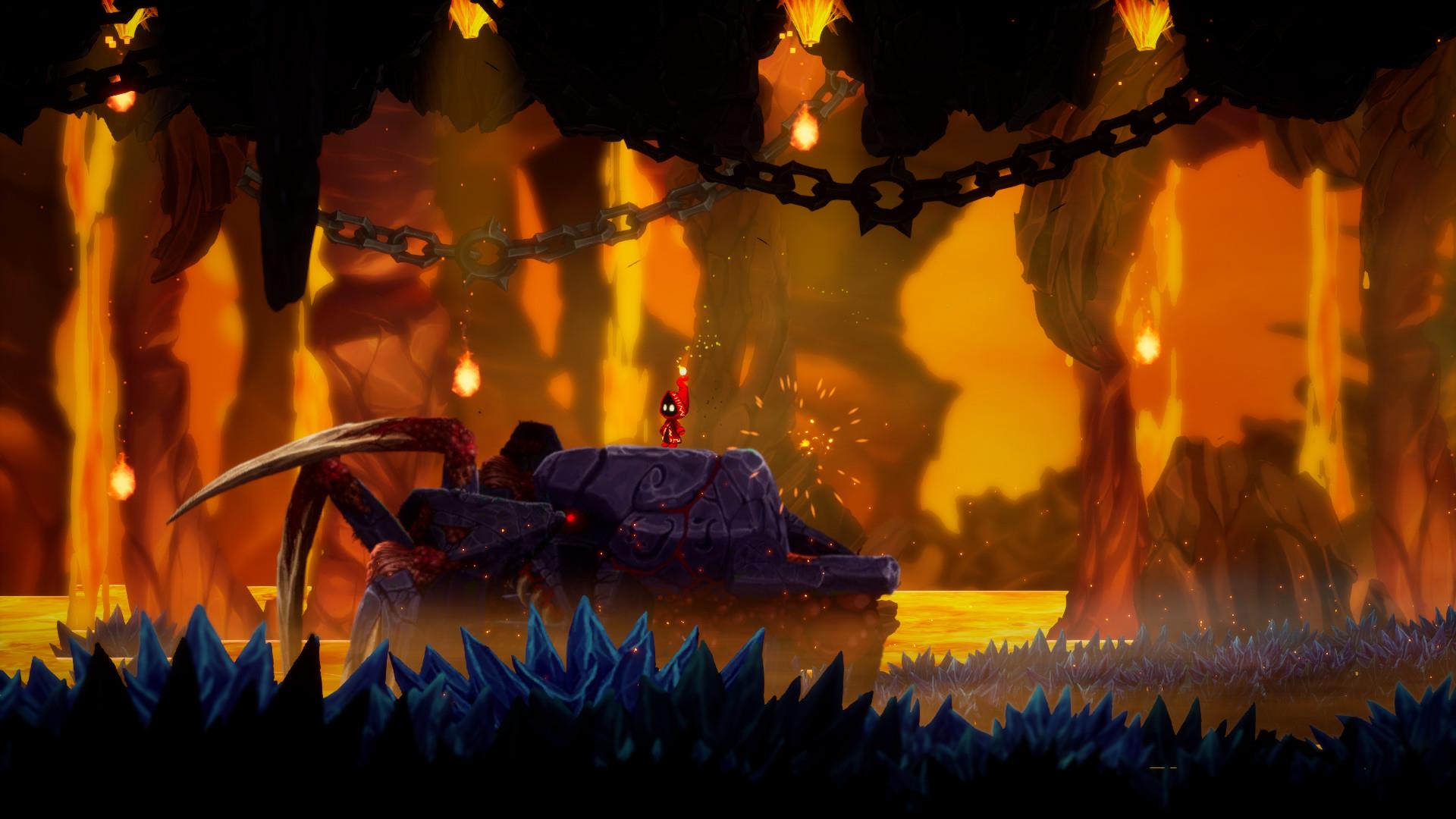 While the abilities cover the platforming aspect in a way, the portals handle the puzzle aspect. As mentioned above, opening portals will affect your surroundings in a certain radius of the portal. This is typically used to solve puzzles to progress. The portal that can turn a particular enemy into a block? Sometimes it’s as simple as just then pushing the block onto a switch within the radius of the portal (once you close the portal or the object leaves its radius, it goes back to “normal”). Other times the enemy drops from the ceiling and will destroy itself once it hits the ground from a certain height, so you have to find a way to essentially soften its fall so it doesn’t destroy or break itself before you can use it.

For the most part the difficulty in Unbound isn’t too high at the start. Most of the puzzles can easily be solved by just looking at your surroundings and taking a moment to think. However, the platforming can definitely have its difficulty spikes. When you start getting to the later areas of the game you’ll have to learn how to do platforming while opening and closing portals. I mentioned how some portals will let you turn fireballs into platforms. There are a couple of areas in which you have to cross a large pit with a plant that shoots fireballs at the start of it. To do that you have to open the portal to turn a fireball into a platform, jump on the platform, then jump off of it while closing the portal so the platform turns back into a fireball, then before you hit the fireball you have to open another portal to turn the fireball back into a platform, and repeat. These kinds of challenges occur multiple times and get more challenging as the game progresses.

Besides the Demon King there are a couple of boss fights in which you’ll have to use your portals to survive. None of them are really all that difficult once you learn how the fight works and what you have to do to damage the boss. During your travels you’ll come across other mages who’ll give some sort of advice or lore, then disappear. The two main worlds where the game takes place each have a place where you can read up on the lore you’ve found. 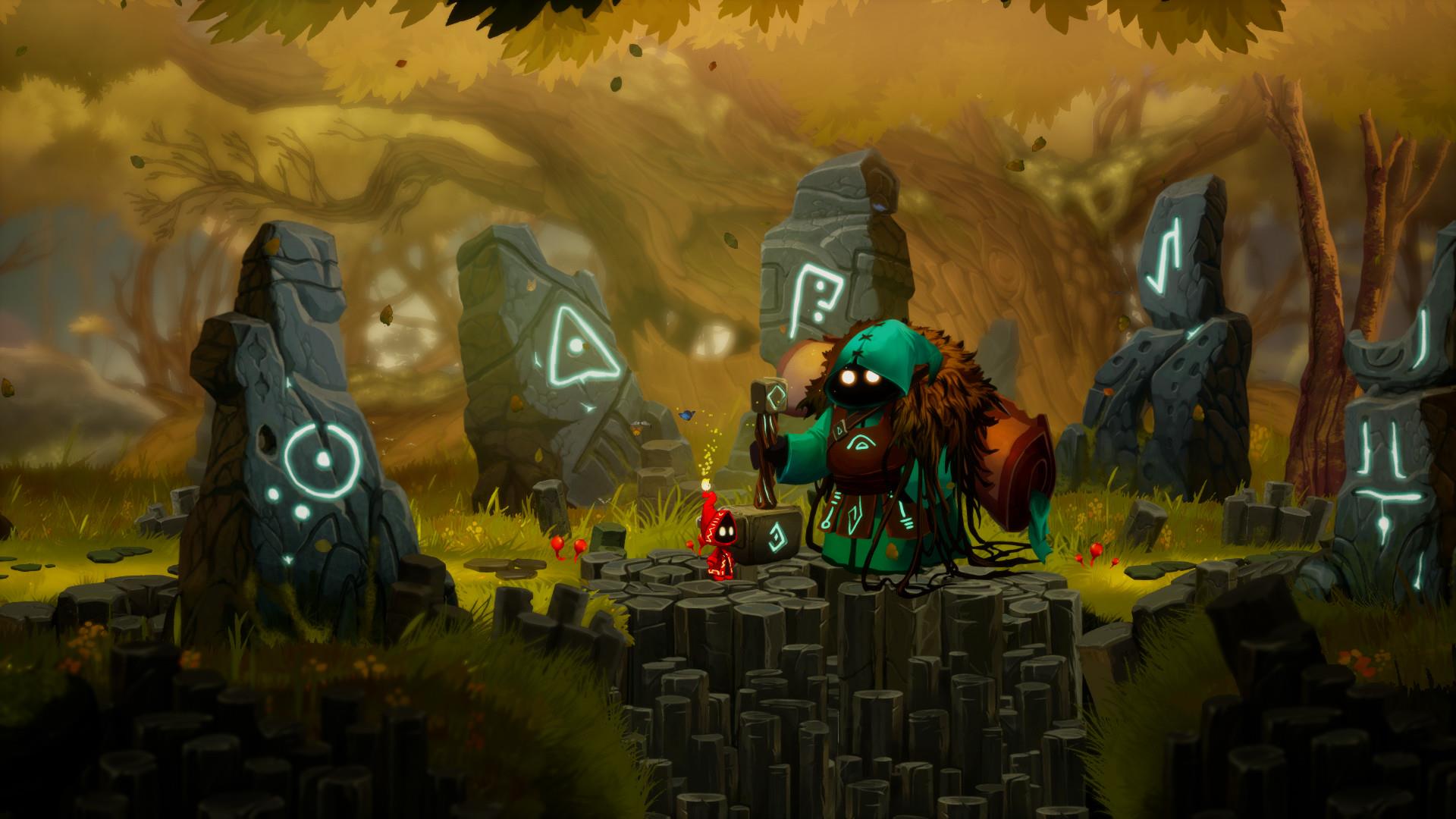 You’ll learn that those mages you’ve been finding want to go back to their world. If you find enough of them in each world you can open up a portal that takes you to an area that tests your abilities in very challenging ways. The first time I did one of these areas it felt like a huge spike in difficulty. Furthermore at the end of each you have to re-fight a boss you’ve already defeated, only now it’s more difficult as the methods you used to defeat them the first time won’t necessarily work the second time, or something has changed to make the fight itself more difficult (i.e. the boss itself is the same, but the mechanics of the fight aren’t).

For as much as I enjoyed the game there is one thing that I kind of scratched my head at. I do need to nitpick for a moment. There are a few areas in the game that are basically trial and error in passing through it. While you do come across fast travel points here and there, the game is typically pretty good in putting you back on the last piece of solid ground you were standing on when you die. However, the trial and error areas basically consist of long stretches of you having to constantly turn your portals on and off with nowhere to stop and take a break until you’re done. This can get annoying as you can’t typically see what’s up ahead until you get there, and given the reflexes you’ll need in these areas, you’ll often find yourself replaying these same areas over and over again. A couple of times the screen even zooms in a bit giving you less of a view of what’s ahead than usual. These areas are mostly in the aforementioned challenge areas or towards the end of the game. Naturally they’re supposed to be more difficult. But I’ve never been a huge fan of trial and error in platforming games, at least not with longer areas like these.

Overall though, Unbound: Worlds Apart is a fantastic game as long as you don’t mind the occasional difficulty spike. The graphics and animation are amazing and the music is nice and relaxing, provided you’re not stressing out on the difficult areas towards the end. While the puzzles aren’t too difficult for the most part, it is nice that each world has several fast-travel points you can warp to basically at any time so you don’t have to keep going through the same puzzles over and over again. While the occasional difficulty spikes do crop up, and the trial and error areas can be annoying, they really don’t take all that much away from the overall experience. Even the occasional performance issues on the Switch version didn’t do much to sway my overall opinion, though they can get a bit annoying at times. Unbound: Worlds Apart is a great Metroidvania for fans of the genre. I’d definitely recommend picking this one up.

A fantastic Metroidvania. The graphics and animation are great and the music is nice and relaxing, provided the occasional difficulty spike isn't stressing you out. There are performance stutters on the Switch version, and a couple of trial-and-error areas that can get annoying, but overall they didn't really sway my overall opinion on the game. If you're a fan of Metroidvania-style games, definitely give Unbound: Worlds Apart a shot.