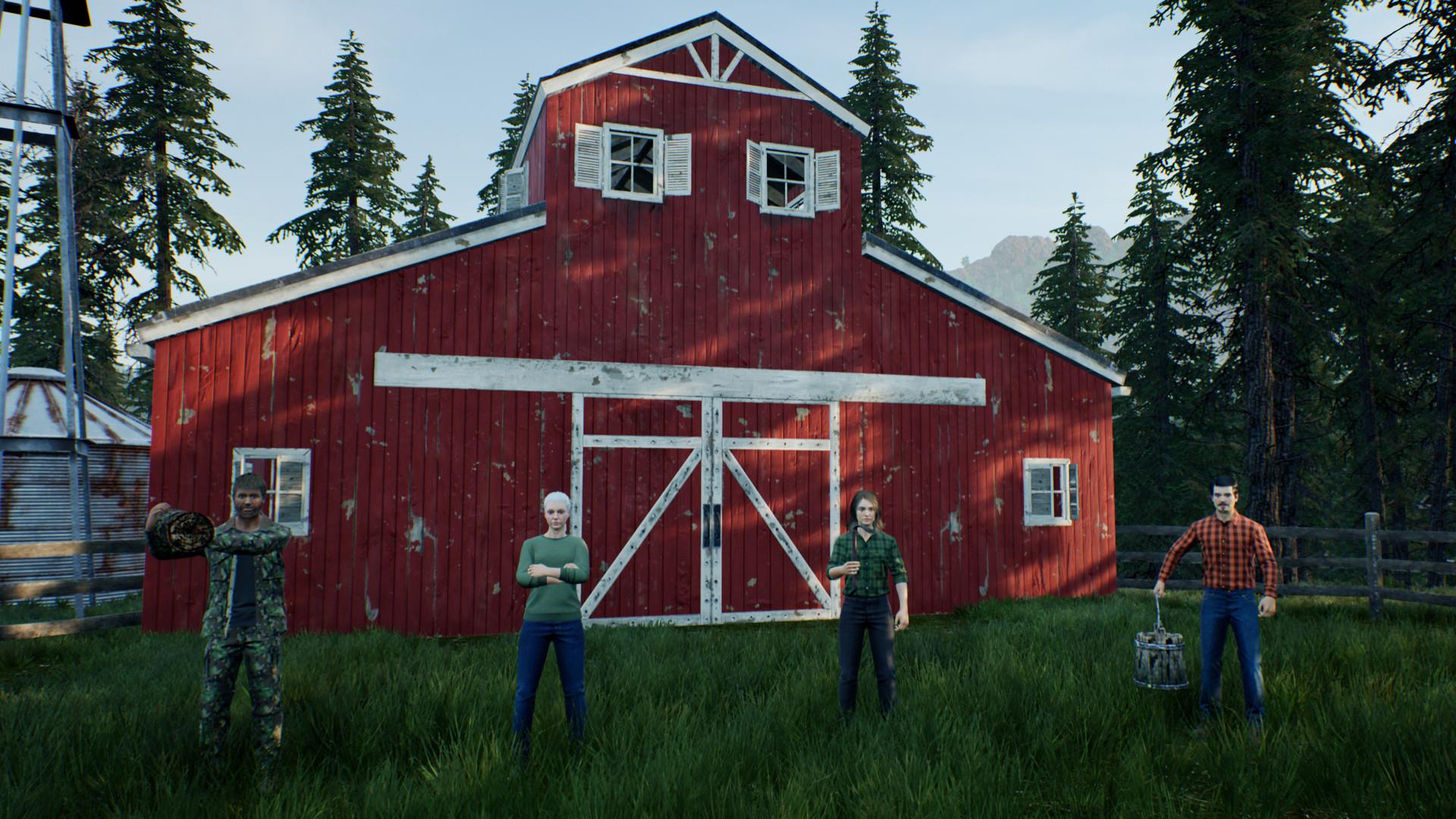 Written by Elliot Hilderbrand on 7/31/2021 for PC
More On: Ranch Simulator

There’s not much story to Ranch Simulator, which is currently out in early access on Steam. You inherit a farm, and it’s your job to run it. After character creation you’re given a 30 minute or so tutorial. In it, you learn how to tear down, fix, build, drive, and purchase animals and equipment, all the basics needed to make it as a rancher. The tutorial was easy enough to understand all the mechanics, and not too long to make me bored learning the ways of the world around me. 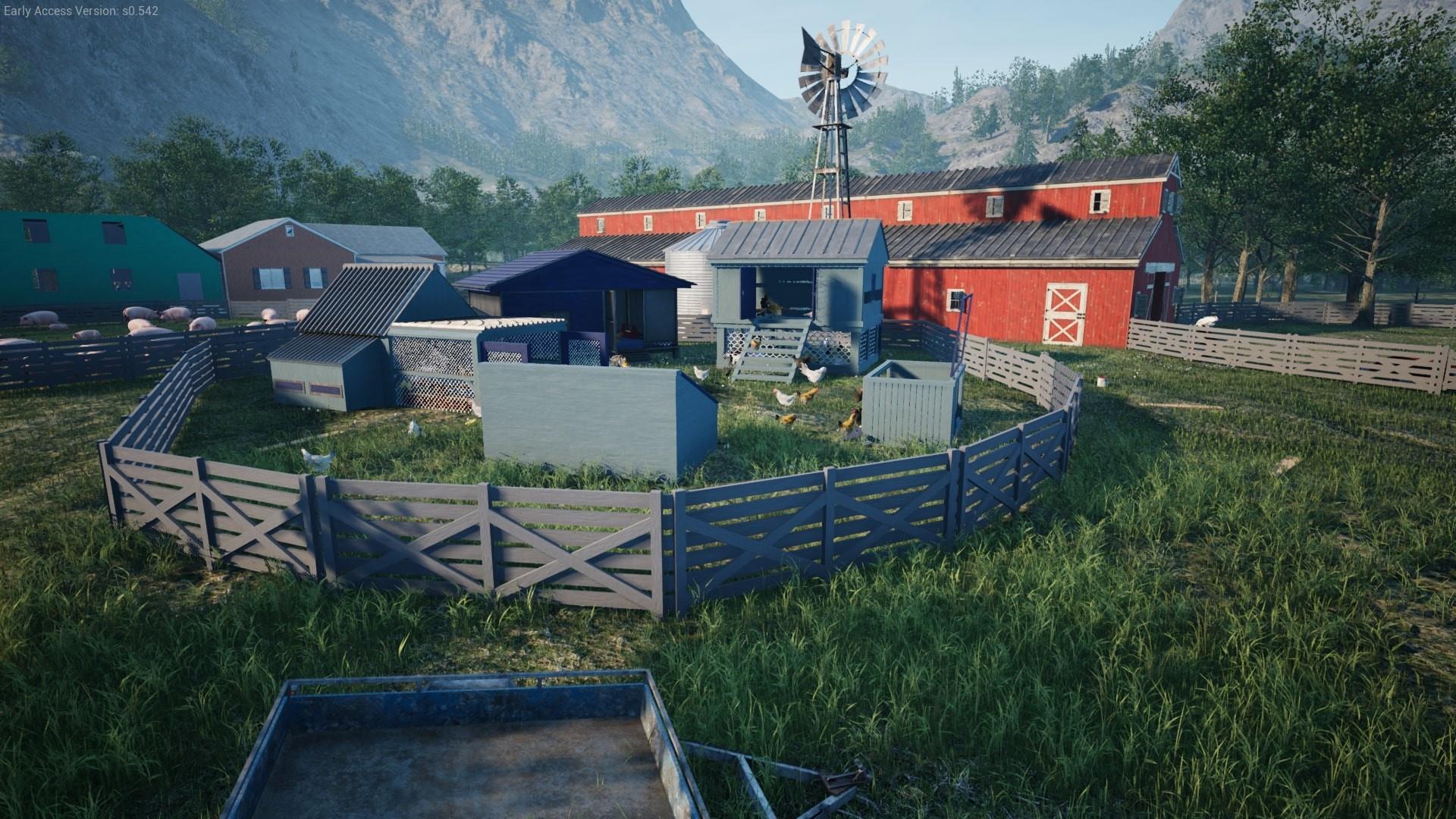 You might be free to do as you please, but you’ll need income to do all of it. You can buy animals, like chickens or pigs, farming the eggs, but that will only go so far. The possibilities are numerous when trying to think of a way to make it to your rancher fortune. You can even abandon the farm and take up arms and hunt local game, although I only came across deer when searching.

Gameplay is pretty much what you imagine it to be. You are in charge of the ranch, and can pretty much do what you want, limited only by the money and materials you currently have on hand. Want to go straight for a big ranch house? You can totally do that. It may take longer because you didn’t focus on building things that bring in more income, but hey, it’s your ranch, do what you want. After trying out the animals I mostly stuck to chickens and became the crazy chicken guy. 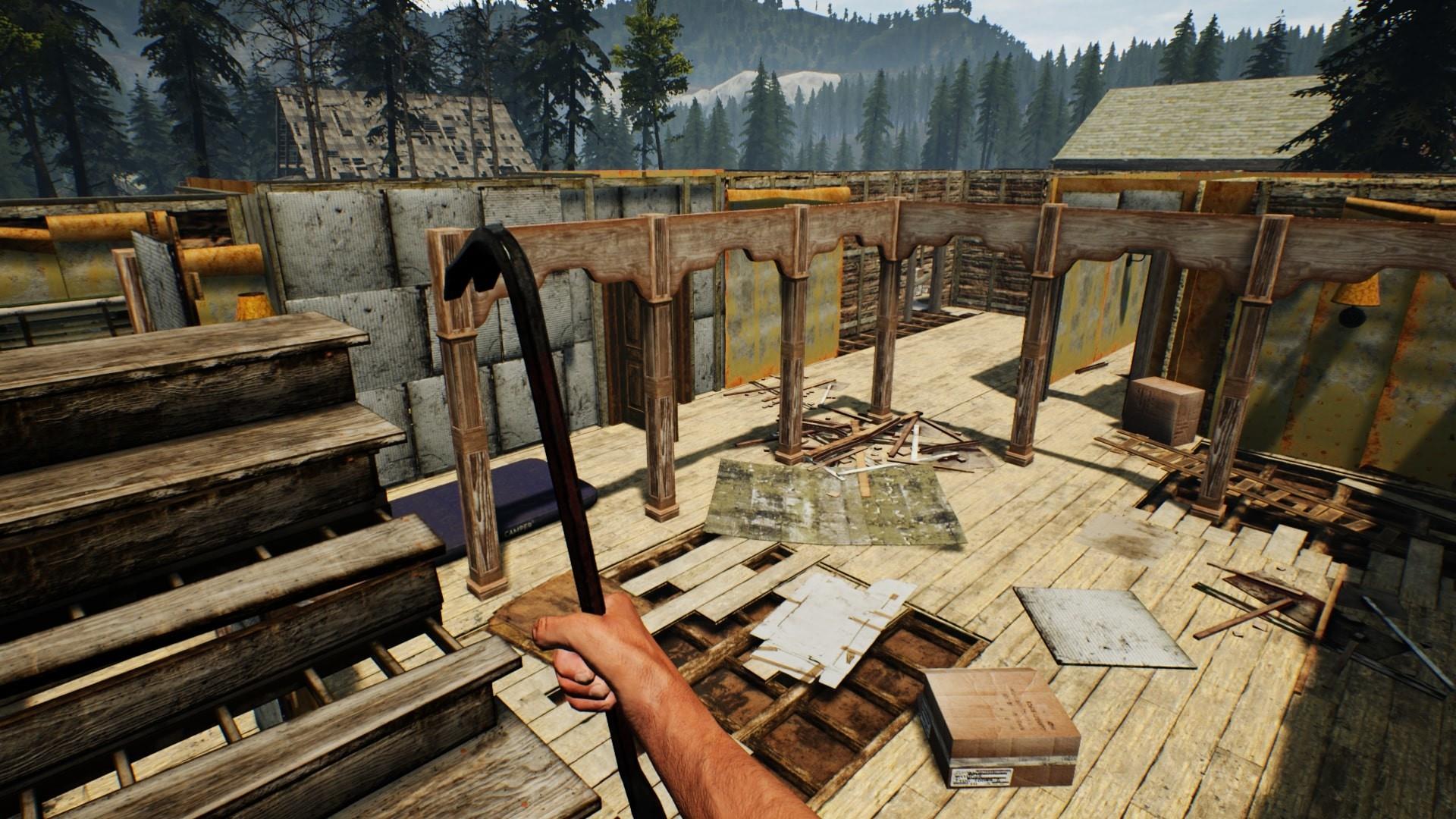 The building mechanic of the game was easy to understand and simple to use. Choose where you want to build the barn, and then bring the materials to that place, and bam, you eventually get a barn. Tearing down trees or building up something doesn’t necessarily look amazing on screen, they just kinda appear. If you are looking to watch something be built over time, look elsewhere.

Ranch Simulator delivers jobs and tasks lists in an easy to understand way. Waypoints are set up automatically when a task comes up, and when playing with friends anyone can tackle the task and once it’s complete, it is completed for everyone. I liked how money in the game is also shared between the party, no need to worry about who needs to buy something because it all comes from one account. 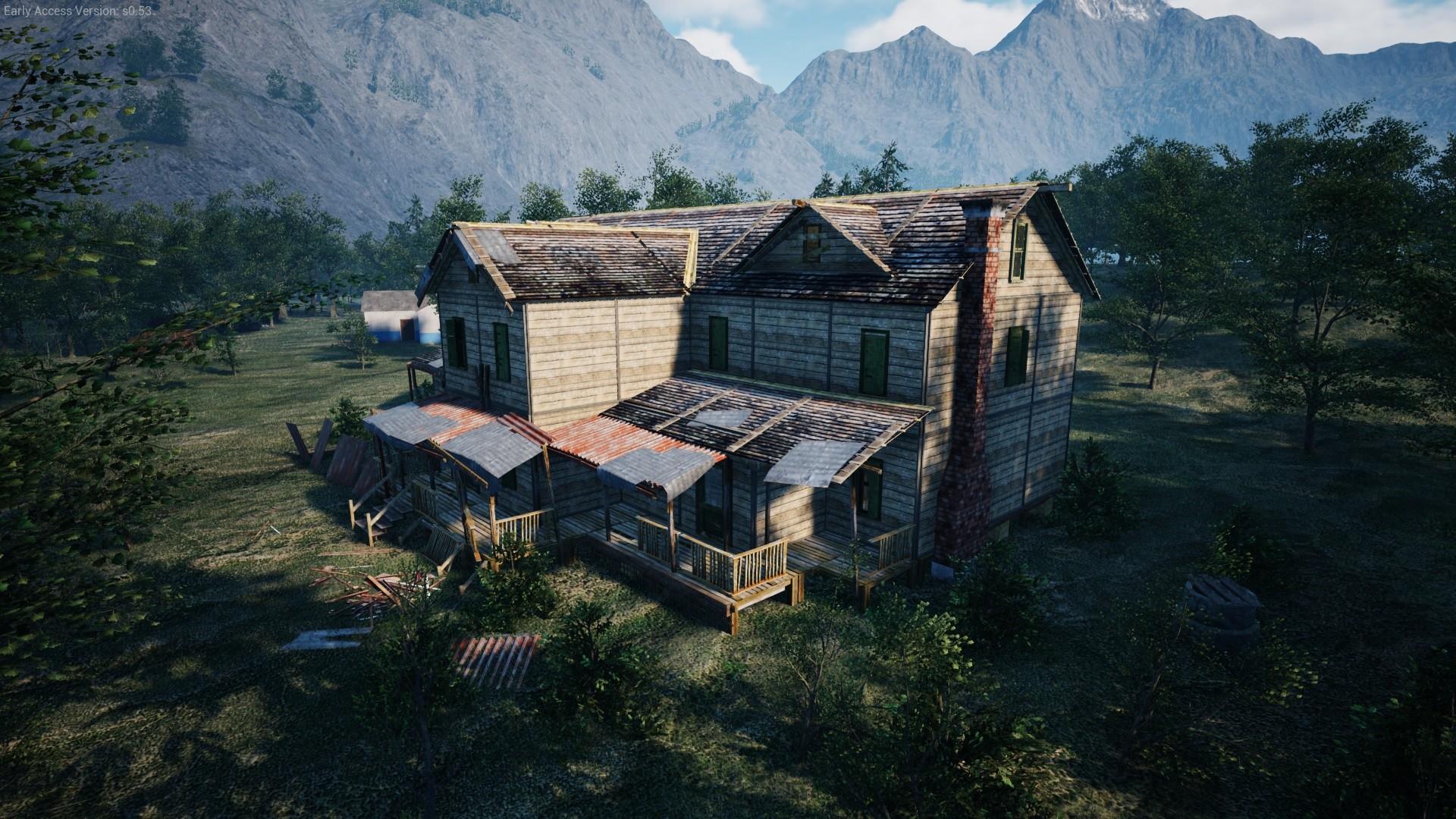 The world of Ranch Simulator isn’t a big one. A gas station, hardware store, car shop, general store and burger shop are all within walking distance on the map, it takes a few minutes to get from one side to the other. Wildlife dots the landscape as well, and hunting is an option. While this isn’t a shooting game, the mechanics are solid enough that they can provide a nice distraction to the farming part of the game.

The realistic world of Ranch Simulator runs pretty smoothly, and probably will on most PCs without much of an issue. The minimum requirements are a 64-bit processor and operating system, a Windows 10 operating system, Intel Core i5-3570K or AMD FX-8310 processor, 8 GB of RAM. Graphically it wants a NVIDIA GeForce GTX 760 or AMD Radeon RX 470, DirectX Version 12, and 15 GB of space. This makes it easy to convince friends to play with you, which is the highlight of Ranch Simulator. 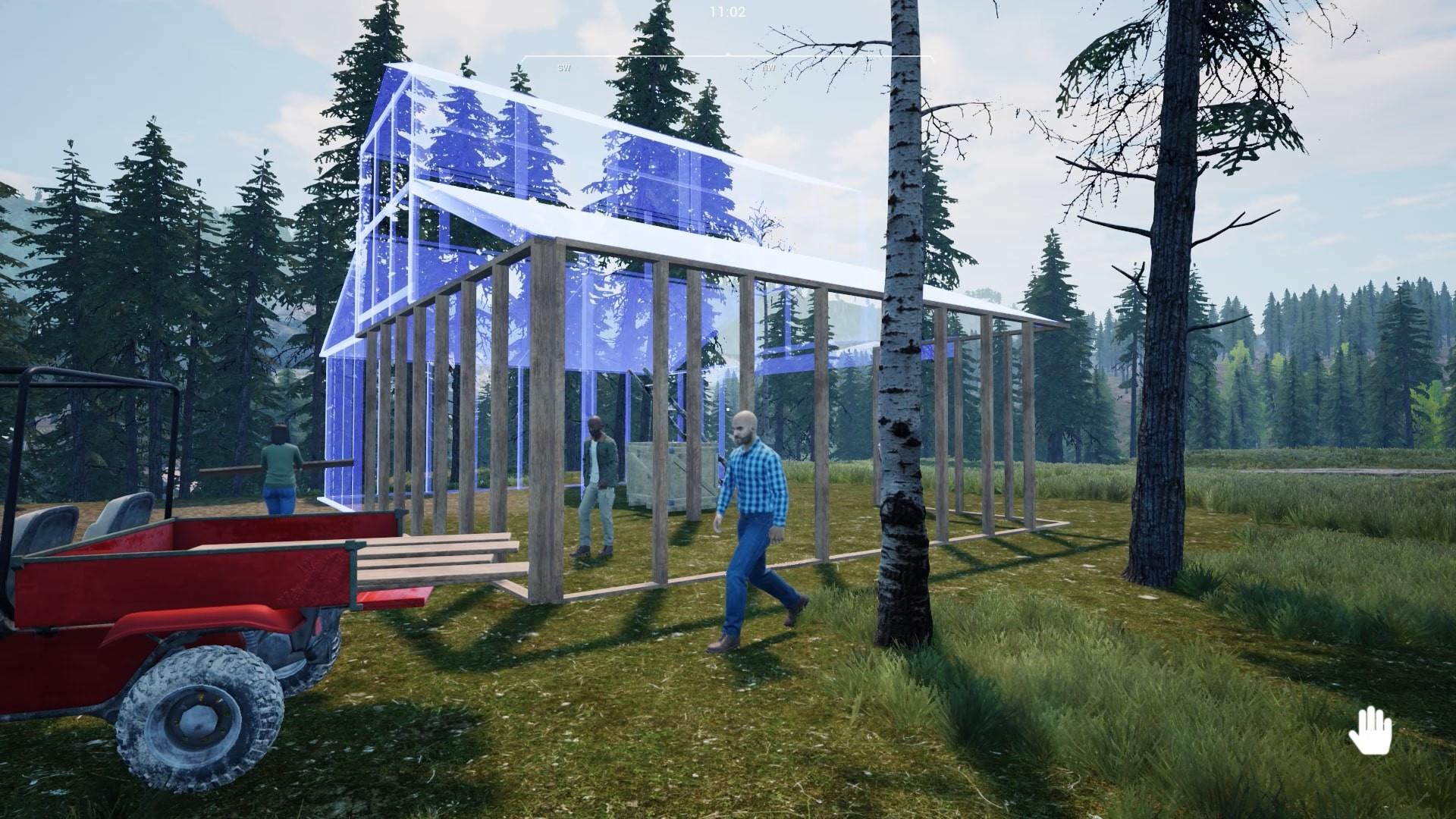 Gaming Nexus was lucky enough to get several keys to try out Ranch Simulator together. Multiplayer is done right here. Anyone can complete jobs or tasks, and progress is made and shared by all the players in the party. It was easy to have Eric go and buy chickens, as John worked on taking some trees down back at the ranch to make fences. Two hours together flew by as there was so much to do to get the farm to look even remotely presentable. The most fun I had was when playing with others, it really is where Ranch Simulator shines brightest.

There are some perhaps unintentional funny moments to be had in the game, a big one being the removal of trees. Wood is needed for virtually every project. Naturally the place to start taking down trees is near your farm. But you quickly realize that the trees near your house will not be enough. Eventually you come to realize that you are in fact a logging company, taking down any tree that you see within sight. I found myself getting into my truck, with my saw, and in search of more trees to turn into lumber. The amount of deforestation taking place would be worrisome in the real world, but hilarious in Ranch Simulator.

Ranch Simulator offers exactly what it sounds like it does. The building and farming mechanics are well done. Most of the improvements I would like to see are mostly quality of life. Adding more animals to hunt in the wild, as well as more animals to purchase for my farm. Besides chickens, Ranch Simulator currently offers cows and pigs. Developer Toxic Dog has said they have plans for additional animals, along with a few other additions. Their dev blog says they are hoping to be in early development between eight months and a year. Making the world feel more alive with neighbors or adding more quests than just the introduction at the start would give me something to work towards other than just trying to do my best.