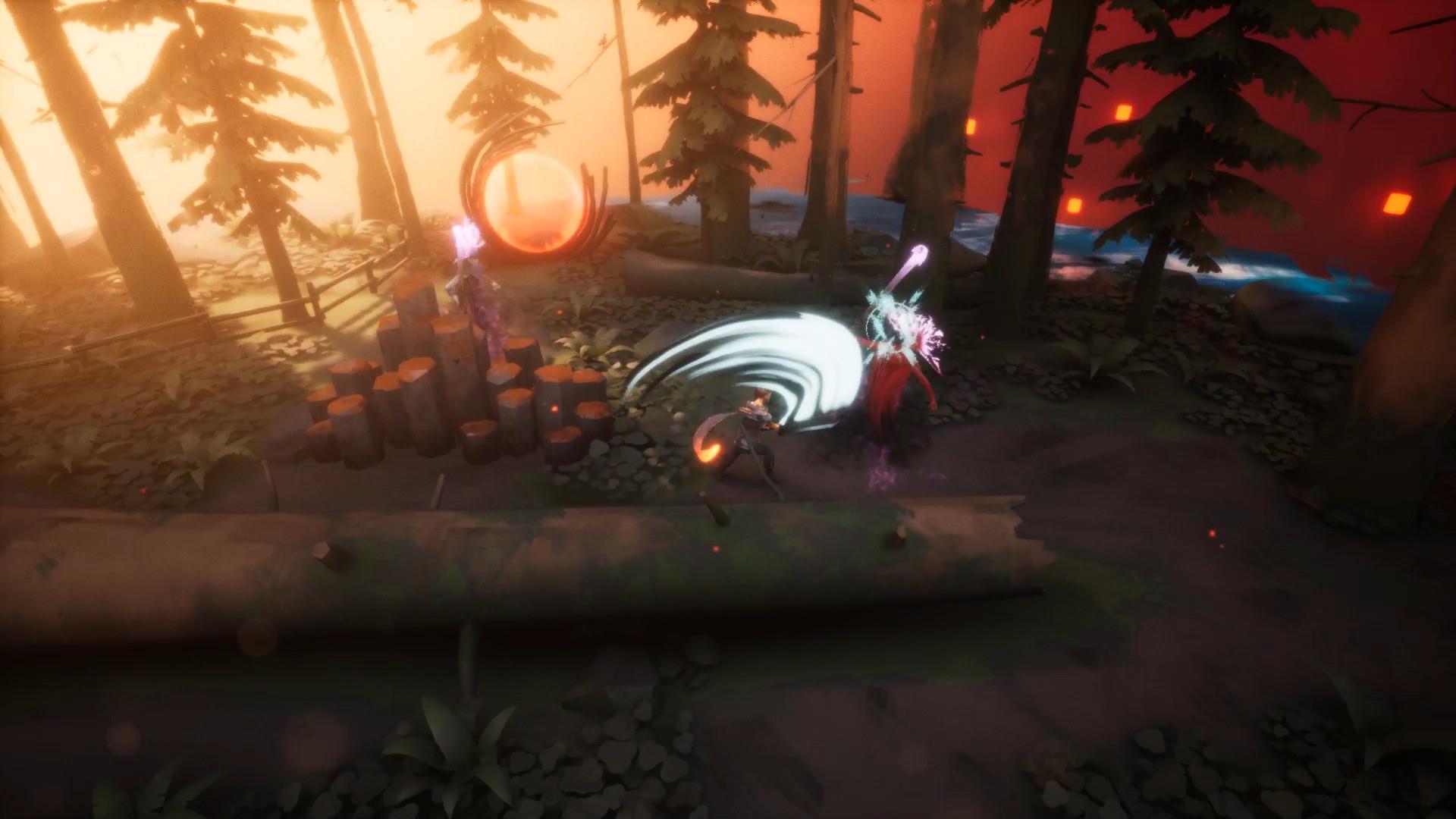 There is something truly unique about Dreamscaper. I'm not even sure if I can put my finger on exactly what it is, but I'd wager it's the combination of a few things coming together in this beautiful little tapestry of a game. Dreamscaper takes a fairly familiar play loop and executes well. It tackles challenging themes where most other games dare not tread. It possesses a style all its own to highlight the substance underneath. I might point to any of these elements resting individually elsewhere in some game or another, but nothing really brings this cocktail together quite like Dreamscaper.

Let's start with the game's visual style, because as it's said: you taste first with your eyes, then nose, and finally mouth. Culinary advice applies to games too, right? With games our first impressions often come from just the still screenshots of a review, or a short clip on a trailer, or maybe those first moments after the title screen. 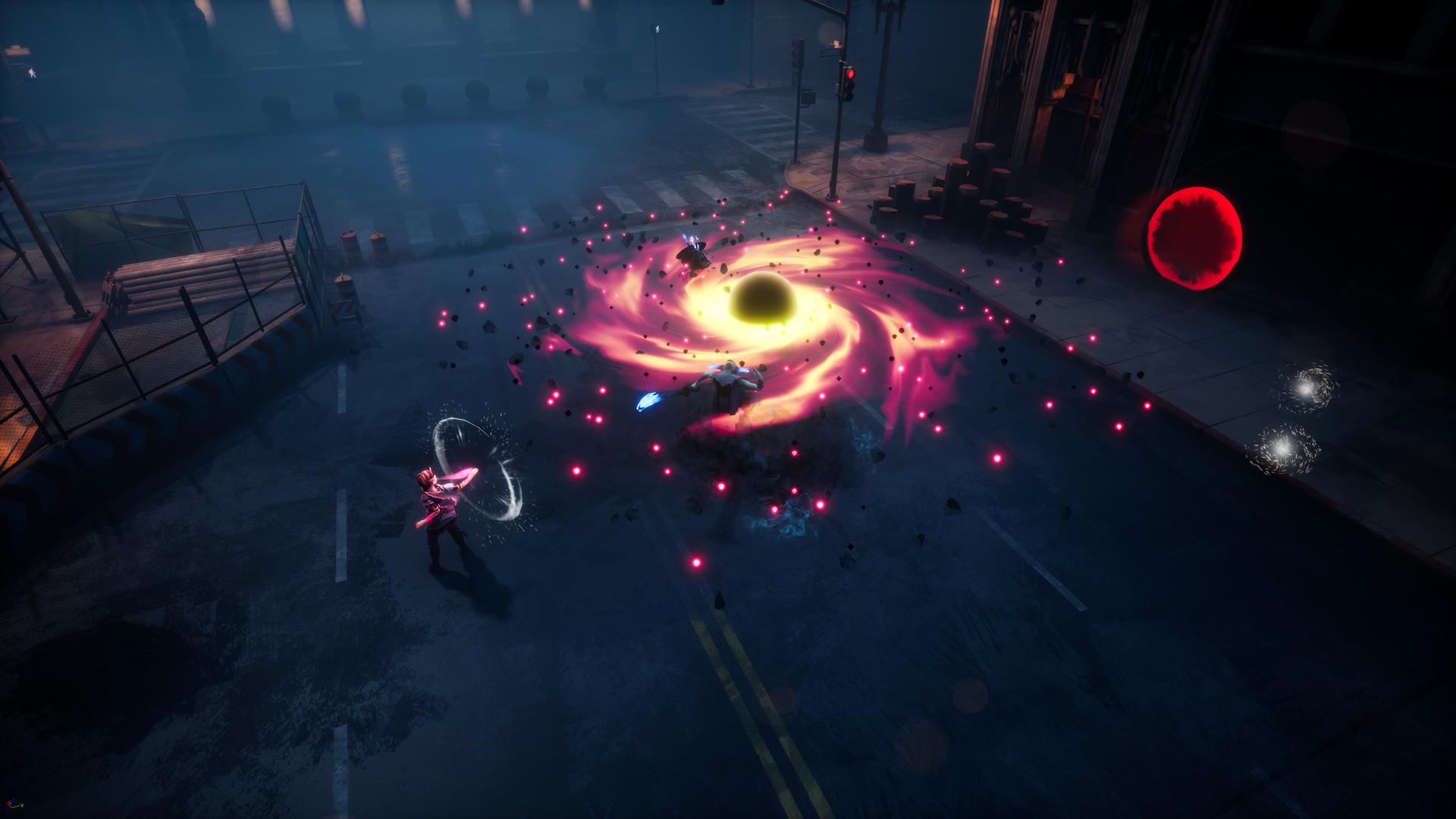 Dreamscaper oozes its own stamp of art direction throughout. The plot device is held in dreams. In dreams our protagonist, Cassidy, confronts not just minions and bosses but her own past through the memories slowly uncovered one sleep at a time. And whether in the waking world or immersed in the dreamworld, this selective minimalism and creative design mashup is everywhere. Cassidy's scarf flashes and trails behind every move, a long streamer of detailed style. Yet she doesn't actually possess a face--just a beige canvas above all the detail in the accessory.

The isometric maps are filled with little details, from the neon in a shop window to the snow resting on the pine needles, and yet you only move from room to room through gates exclusively placed in cardinal directions. The hero, the enemies, the attacks, everything that is important is fluid and clear. Yet in those rare moments when you enter a dialogue exchange with an NPC you realize that character is just a mustache and glasses plopped on a polygon. I think it's partly because the setting is so immersed in the fog of dreams and partly because all the detail that is required is present that all of the missing bits just end up endearing itself to the overall effect.

On Switch, unfortunately, it is a bit of a struggle to read finer text details like weapon notes on the native LCD. Or maybe I'm just getting old. The game is gorgeous when docked and projected onto the big screen, but it clearly falls in the camp of a game made for PC with no bonus points for the Switch port. 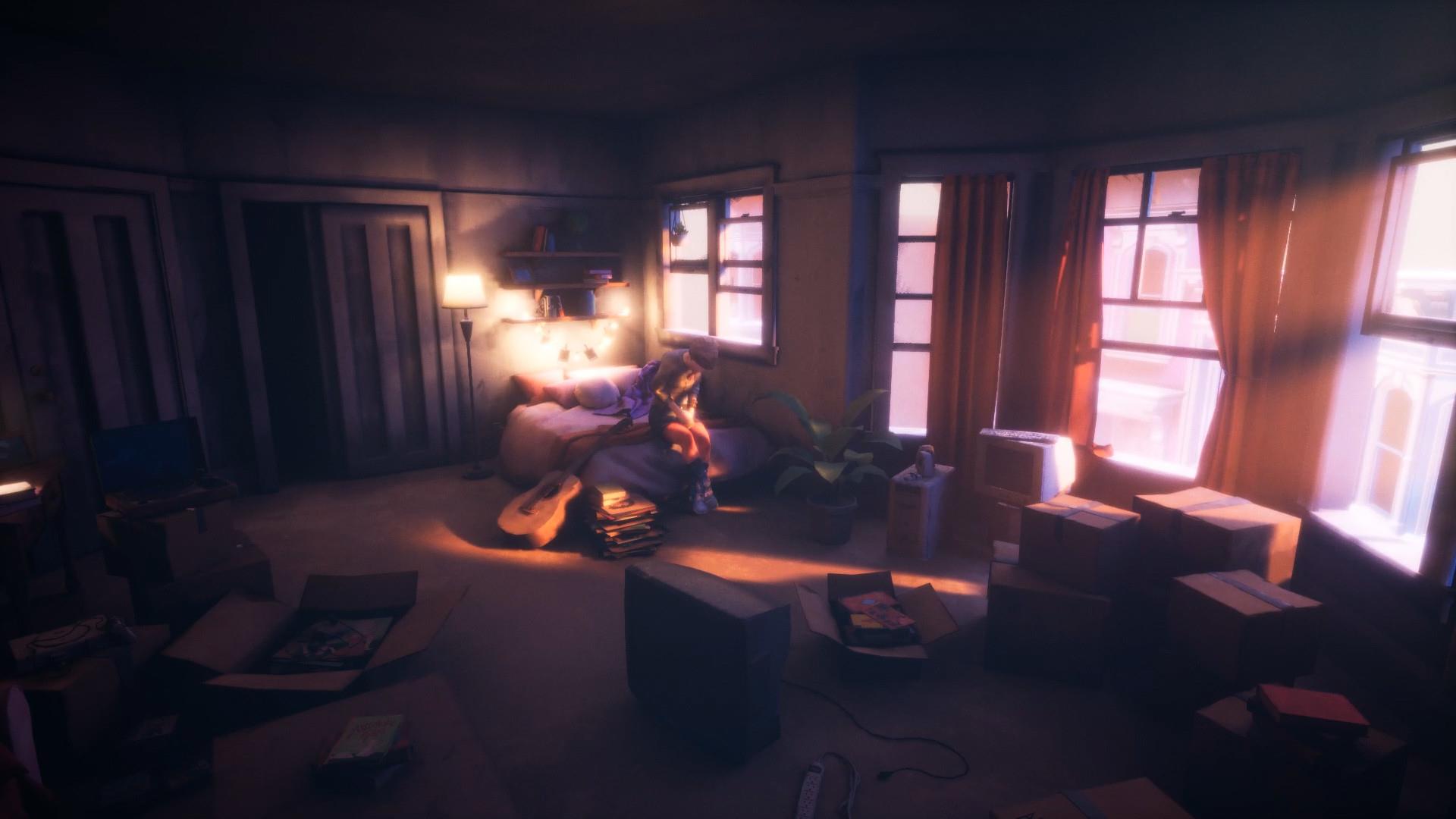 The gameplay is classic roguelike. While the structure and levels remain the same run to run, the actual maps and rooms in each are randomly generated. Most progression does not carry over once a run has ended with Cassidy's untimely demise, but certain perks and relationships do. That's the great thing about dreams, you sleep the next night and can have them again. It's sweet how the game's plot and the game's mechanics marry so thoughtfully together.

But it isn't just a roguelike, it's a roguelike done well. There are loads of weapons and abilities and powerups and things that are constantly feeling unique with each new pickup. Weapon perks are varied, builds can bind together, the very movement timings, ranges, and effects all feel very unique when swapping one item out for the next one acquired. I have no complaints about how the hero moves, how combat plays out, and how the mechanics operate.

I do, however, have some qualms with the difficulty spikes--specifically the cake walk through most of the maps up to the brick wall of the bosses. I get that sometimes a game is about skill and other times it's about figuring out the puzzle. That's not to pigeonhole those mechanics into fitting vs. puzzle games. Plenty of fighting games force you to solve the specific challenge to even damage a boss (think Shadow of the Colossus). Plenty of puzzle games force you hone your skills to the highest level to achieve mastery (think Tetris). Some even do both (hello, Souls games). My issue here with Dreamscaper, is that the boss battles very much fall on the side of figure out how to damage this thing but don't provide any direction on how to actually do it, and also come with steep penalties for the inevitable failure that must accompany the trial and error required to suss it out. 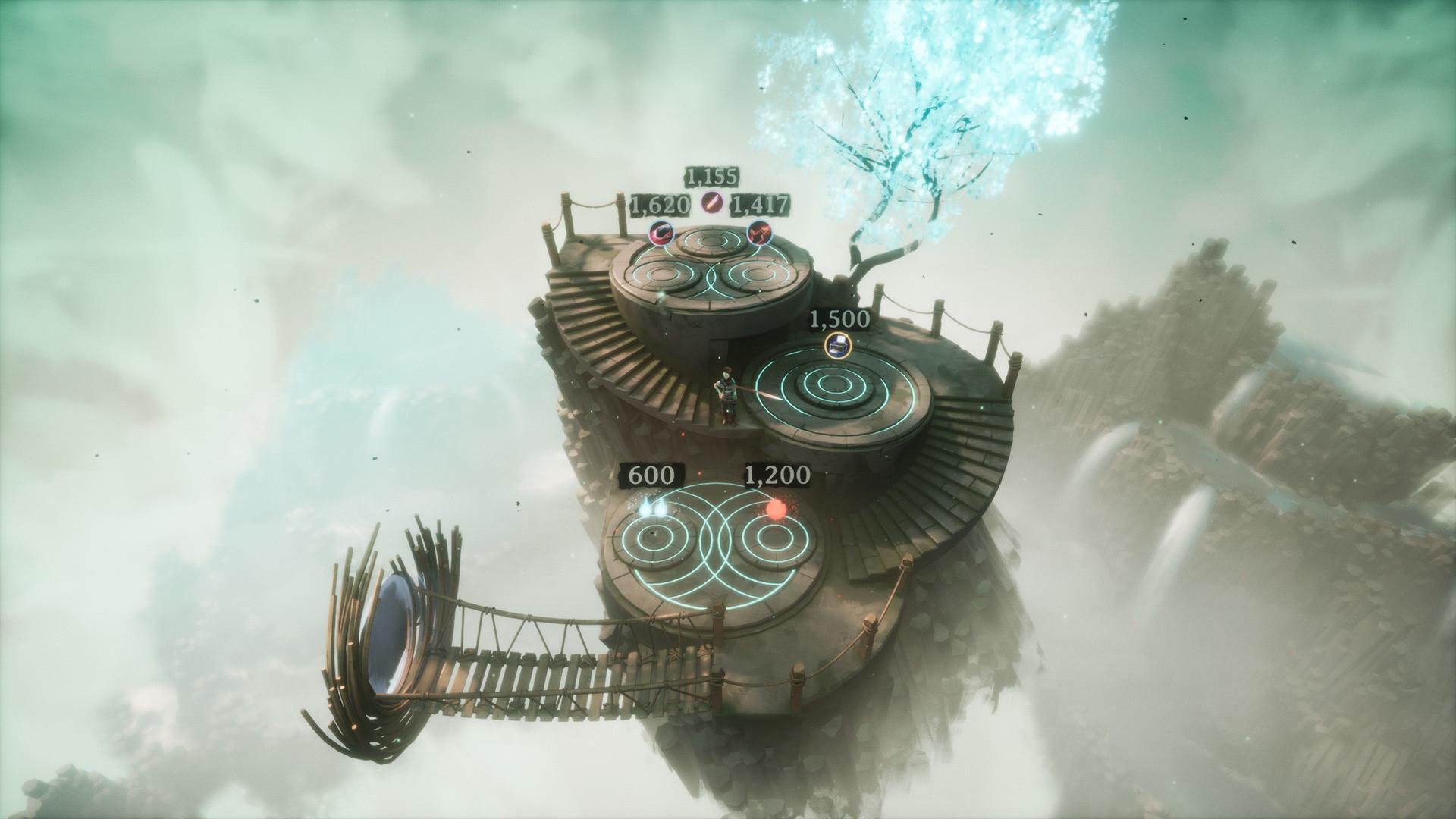 As a contrast, I'm playing through Doom Eternal right now, and that game goes overboard with tips and clues. It will point out the weak spot of each new enemy encounter with a pop up window and provide a codex for later review. It's overkill, sure, but Doom Eternal understands that it's duty is to teach players to rip and tear and find that seamless line of skillful execution of moves and movement amidst the chaos of a room full of varied enemies requiring optimal strategies matching varied weapons against understood weak points under the threat of limited ammo reserves. That sentence itself is a run on mouthful, but so is Doom Eternal's gameplay loops. There is no cover to find or time to stop and breathe, the dance is once movement to the next nonstop until the room is clear. Even mid-fight visual clues continue to address the strategies required. Weak points glow under certain conditions like aiming down a scope. Shields remind you to select a plasma weapon to break them. Even before you have to take down the boss's shield, you've learned and had the mechanic reinforced by minions mimicking the same shields en route to the final arena: if something glows blue/red, then blast it with the purple gun to smash it.

Dreamscaper on the other hand, introduces no such mechanics with its minions, instead leaving you to uncover entirely new strategies for the entirely new challenge of the boss room on the fly.... After you inevitably die in the process of working out what the answer to the puzzle is, you're back to the start to painstakingly reclaim that territory where you were forced out.

Because that's the real problem. We're dealing with a roguelike with permadeath elements and then being asked to trial and error our way through a boss, shuttling back to to square one on every failure. There are no boss checkpoints to aid us, just another new run to greet us. It can be frustrating, especially against that backdrop of knowing you weren't prepared in the first place. The minions do have their own techniques and strategies but they rarely pose a challenge. More importantly, they fail to clue Cassidy in to the end game. The one saving grace is once you have bested an end boss, they can actually be skipped on future runs. You also skip the reward, but it does offer a bit of an olive branch when you're trust trying to lob a given challenge and not putting heart and soul into a complete run. 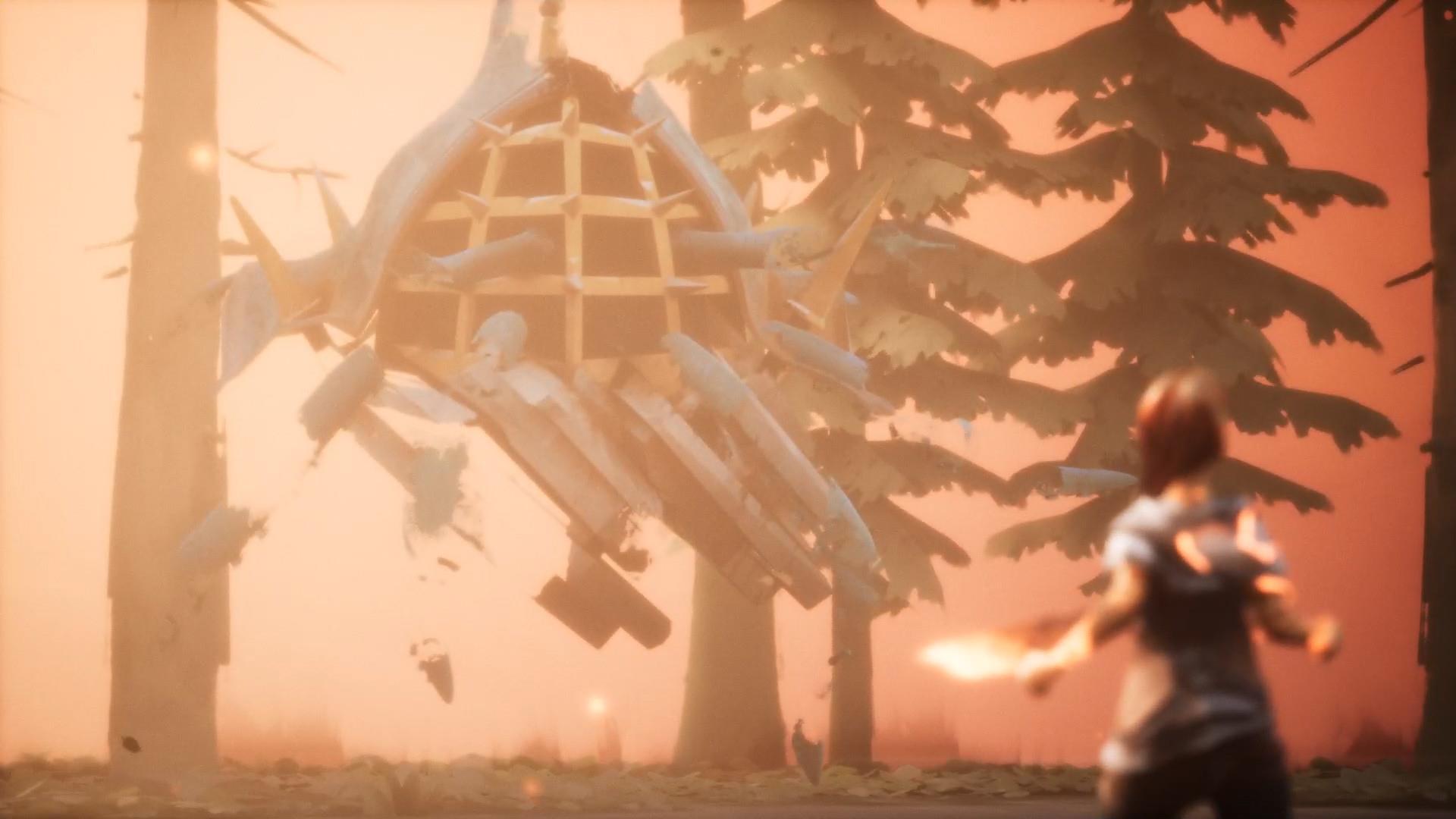 Despite any misgivings in other areas, the place where Dreamscaper pulls no punches and really steps out with something special is in the narrative. Cassidy takes on themes like sadness and loneliness and anxiety in ways other games ignore entirely. NPCs aren't just quest givers--they actually don't give quests at all. Cassidy returns to her bed for each new run into the dreamscape. Yet those NPCs play a vital role to move the story forward, allowing Casisdy to explore those relationships and develop as a character and earn gameplay perks and bonuses along the way.

Progress in the dream world and resources collected along the way can be crafted and transformed into opportunities to interact with the select group of regulars Cassidy runs into in her various frequently traveled spots in her waking life. But the real reward is simply watching that story unfold, the past become more clear. Seeing those bonds strengthen with the other people just trying to make their own way in this world. This is the true beauty of Dreamscaper. It is the last stitches to bind the plot device of dreams, the minimalist style, and the rest of the game together.

Dreamscaper is a beautiful game. The gameplay is tight, the game loop is solid, it has style to add to that substance. And most importantly, it pulls it all together with a plot that both cleverly incorporates the other elements into something cohesive, challenging the player with provoking discussions about dealing with complex emotions as we stumble through our day-to-day existence. It's a worthy entry into the roguelike genre in its own right, but then does something with its storytelling that elevates it that little bit higher. There are a few frustrations along the way in difficulty spikes and a lack of Switch optimization, but they do little to detract from the overall effect of a very good game.

Dreamscaper combines solid gameplay elements and narrative in an excellent and carefully crafted adventure. While there are occasional difficulty jumps that break the loop, there are mechanics to put things back together and push onward in a journey of discovery and heart. It's a good roguelike outright that also succeeds weaving in storytelling that most games are often too fearful to even try.