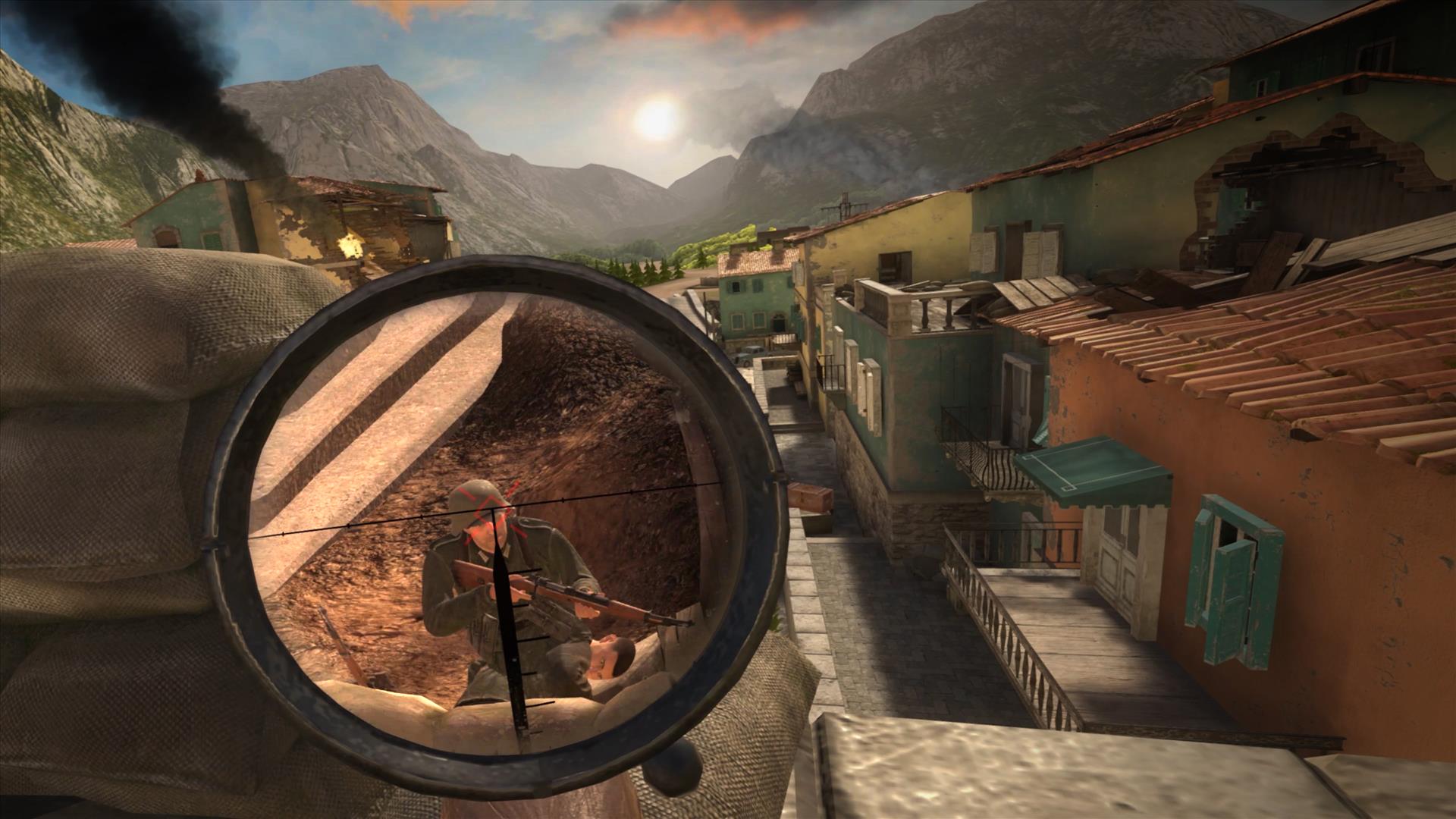 Shooting a sniper rifle feels like it should be a natural fit in the VR space. Imagine hunching up in a tower, holding your breath as you pop off carefully placed shots at the hapless enemy scurrying below. But as most VR players know, looking through a scope in VR is easier said than done, and getting the feel for how to handle various weapons when you can’t actually feel their heft in your hands can be challenging.

Sniper Elite VR suffers from some of these issues. Though the game is still a decent amount of fun, it took me a long time fiddling with the controls and settings before I was comfortable enough to make any real progress. Being a lefty didn’t help matters much. It took me a long time to figure out the appropriate distance at which to hold the scope. Even after I got fairly proficient, I would still say that the experience is a little less than smooth. I spent far more time flailing around in the early game than I am comfortable admitting. 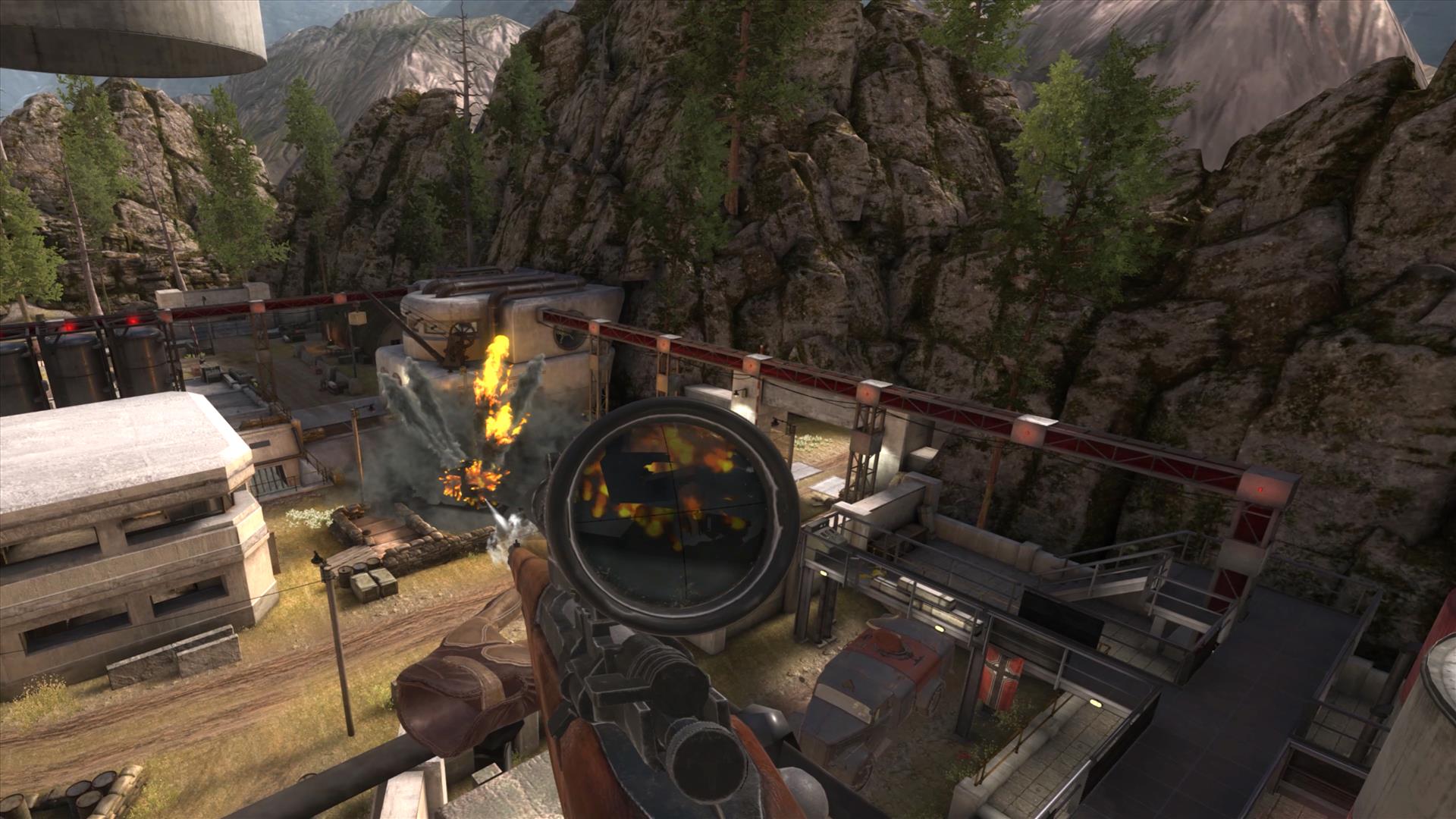 Sniper Elite has a pretty cool and unobtrusive setup. Years into the future, a member of the WWII Italian resistance sits in a gentle pastoral setting and watches his family frolic about, reminiscing about the sacrifices his generation made so that this one could live in peace. It’s a brief but nice framing device for the battles in the game, with the old guy narrating the missions, filling in the blanks about what the player is actually trying to accomplish.

I’ve dabbled with the mainline Sniper Elite games, but not enough to call myself a fan. As such, I wasn’t quite sure what to expect from Sniper Elite VR. I was picturing more of a Hitman-style pace, carefully picking out a vantage point and then hitting a single target. I was surprised to see just how much of Sniper Elite VR involves displacing to new vantage points. Sure, those “sit up high and pick dudes off” missions exist, but the majority of missions ask the player to creep through sprawling levels, moving from objective to objective. Being the clumsy oaf that I am, I was often quickly discovered and had to shoot my way out of many a bad situation. 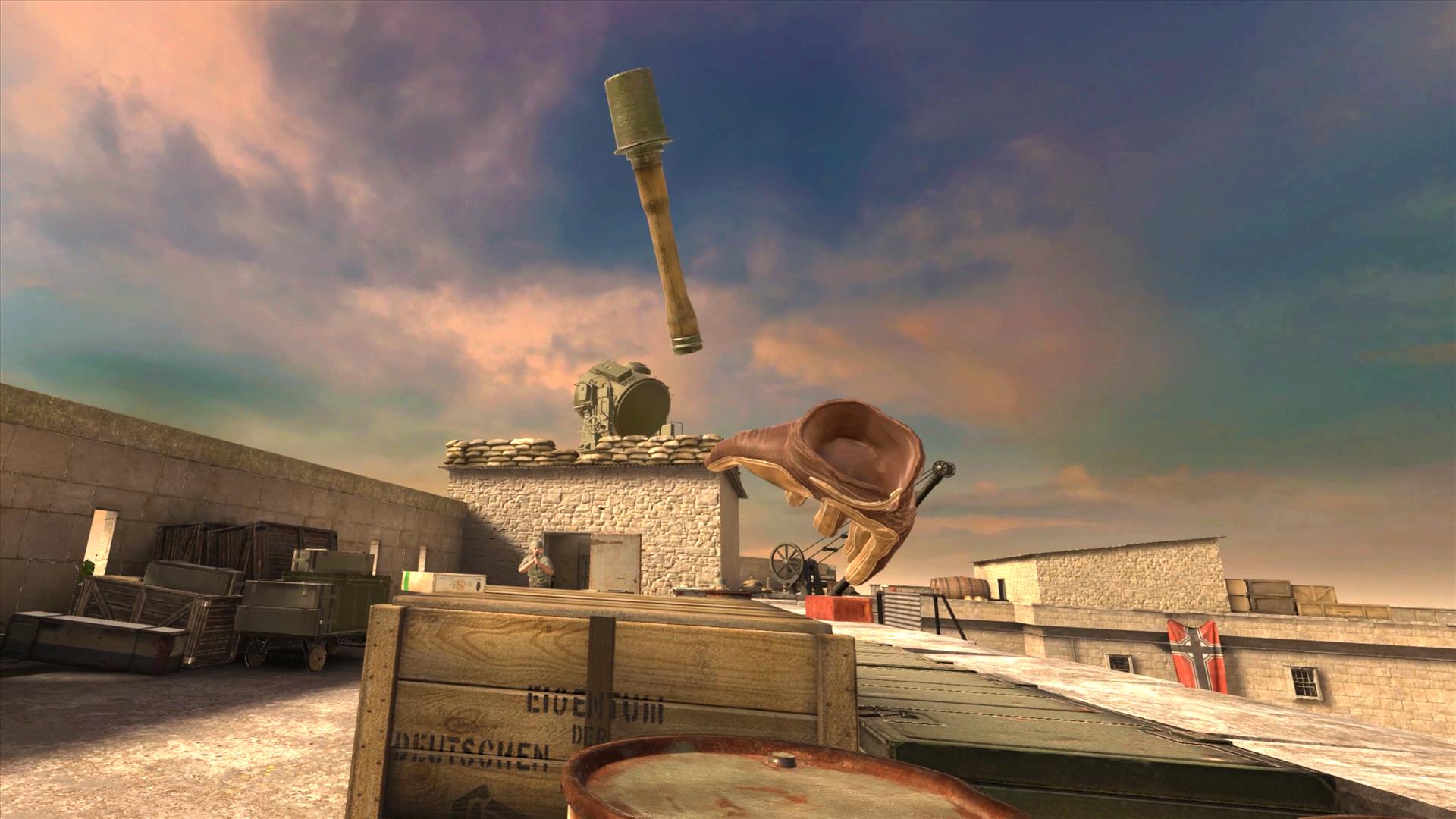 Equally surprising is how often I didn’t even have a sniper rifle in my arsenal when I could have sorely used one. In addition to the titular weapons, players end up wielding pistols, SMGs, and shotguns, none of which have the precision I desired. When you are facing down an alley full of enemies hiding behind crates, and all you have is an SMG that wants to flop around like a firehose, you need to quickly get competent or die. I died a lot, until I realized that most of levels in Sniper Elite VR contain just enough branching paths to usually offer better cover than I was previously using. Running and ducking are sometimes just as important as creeping.

A lot of my problems with the weapons in Sniper Elite VR stem from the fact that I am left-handed, and weapons are just built for righties. Sniper Elite VR has a nice setting for lefties that swaps the UI pointer and some scopes to the other side, but that doesn’t change the fact that my first impulse is to hold every weapon backwards. When your ammo pouch and the weapon’s bolt are on the right-hand side, you have little choice but swap the way your hands want to grip the rifle, which led to a longer period of adjustment than I expected. But that’s not a true knock on the game – it’s a knock on the world, and we lefties are used to maneuvering in a universe not built for us. 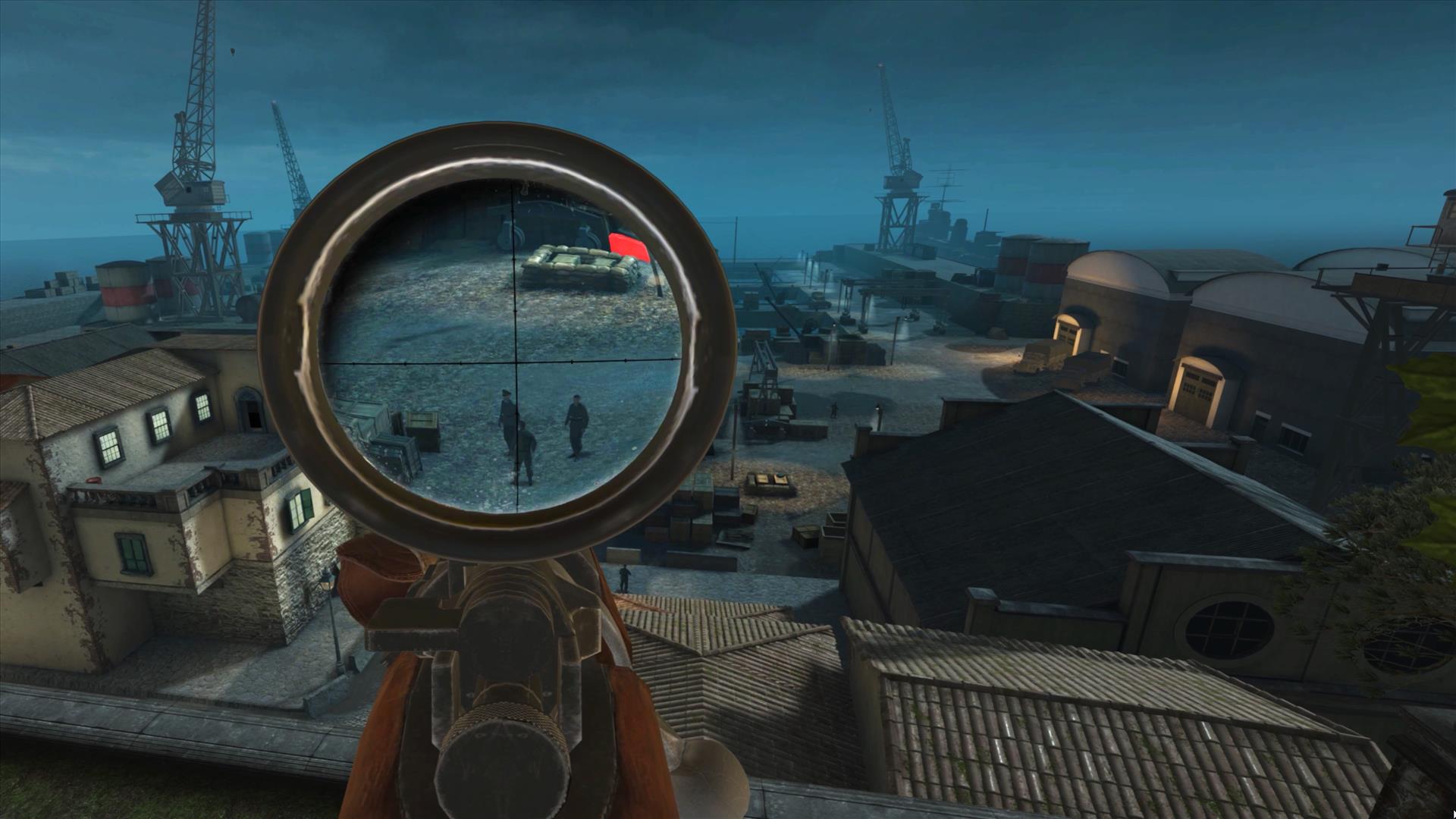 Even after getting the hang of holding various weapons correctly, I still often struggled with Sniper VR’s reload mechanics. When shooting a sniper rifle, the player must pull back the bolt and then relock it into place to fire the next shot. I can’t tell you how many times I tried to do this, only to discover when trying to pop off a carefully chosen shot that the bolt had failed to lock forward again. Even worse, the controls needed to pick up ammo and objects off the floor is very finicky (a common VR problem), leading me to sometimes fail missions because I was tossing ammo all over the place and then couldn’t pick it back up. My bumbling could get so extreme (I felt like the Chevy Chase of snipers) that I would occasionally just turn off the need to reload at all and let the game handle it for me.

But all of that fumbling was soon forgotten when I was able to fall into a rhythm and start playing Sniper Elite VR the way it is intended to be played. The X-Ray Kill Cam from the mainline titles is here, and is just as visceral and brutal in VR as you might expect it to be. The player has the option to either ride the bullet to their target or just see the point of impact. If your stomach can handle it, I highly recommend the “ride the bullet” option, as it delivers a blood-curdling thrill every time it activates – which is so often that I actually had to turn the frequency down a little bit in the options because my stomach began rebelling. But the effect is so good, I was loathe to turn it off entirely. 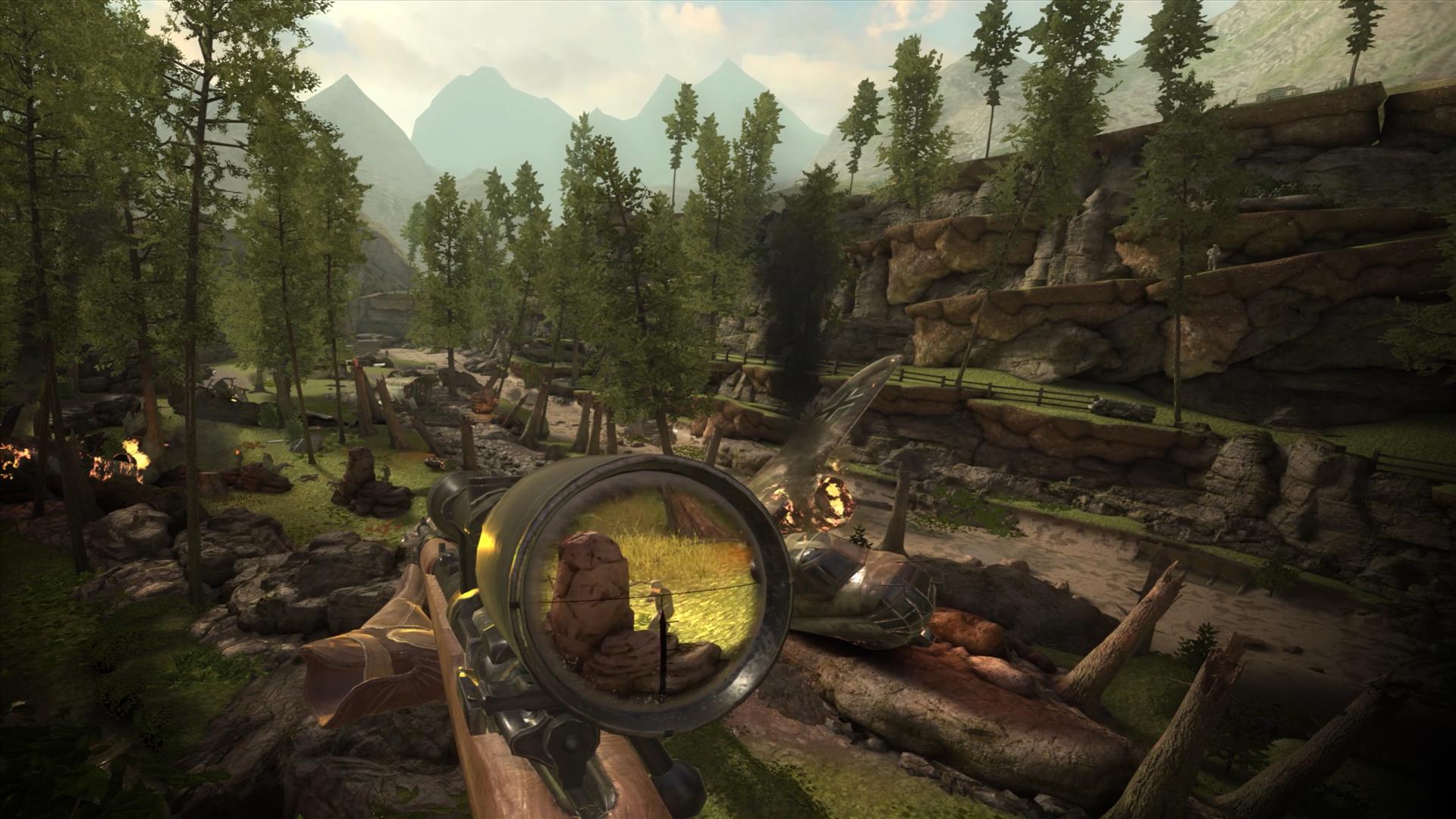 I played Sniper Elite VR on Oculus Quest, and while I really enjoyed seeing the game’s well-designed WWII settings in higher fidelity, I found myself wishing for the Aim controller on PS VR more than once. With its automated loading and more tactile grip, I feel like the Aim controller would have provided a more tactile and satisfying experience for me, and taken a lot of the fumbling out of the equation.

Sniper Elite is a surprisingly long and involved game, with 18 replayable levels – which could take a pokey player like me up to eight or nine hours to complete. While the levels aren’t gigantic, they are long and varied enough to maintain the player’s attention, and the developers pack in plenty of surprises. It isn’t uncommon to come around a corner expecting to find an empty room, only to find a group of soldiers, just as surprised to see you as you are to see them. 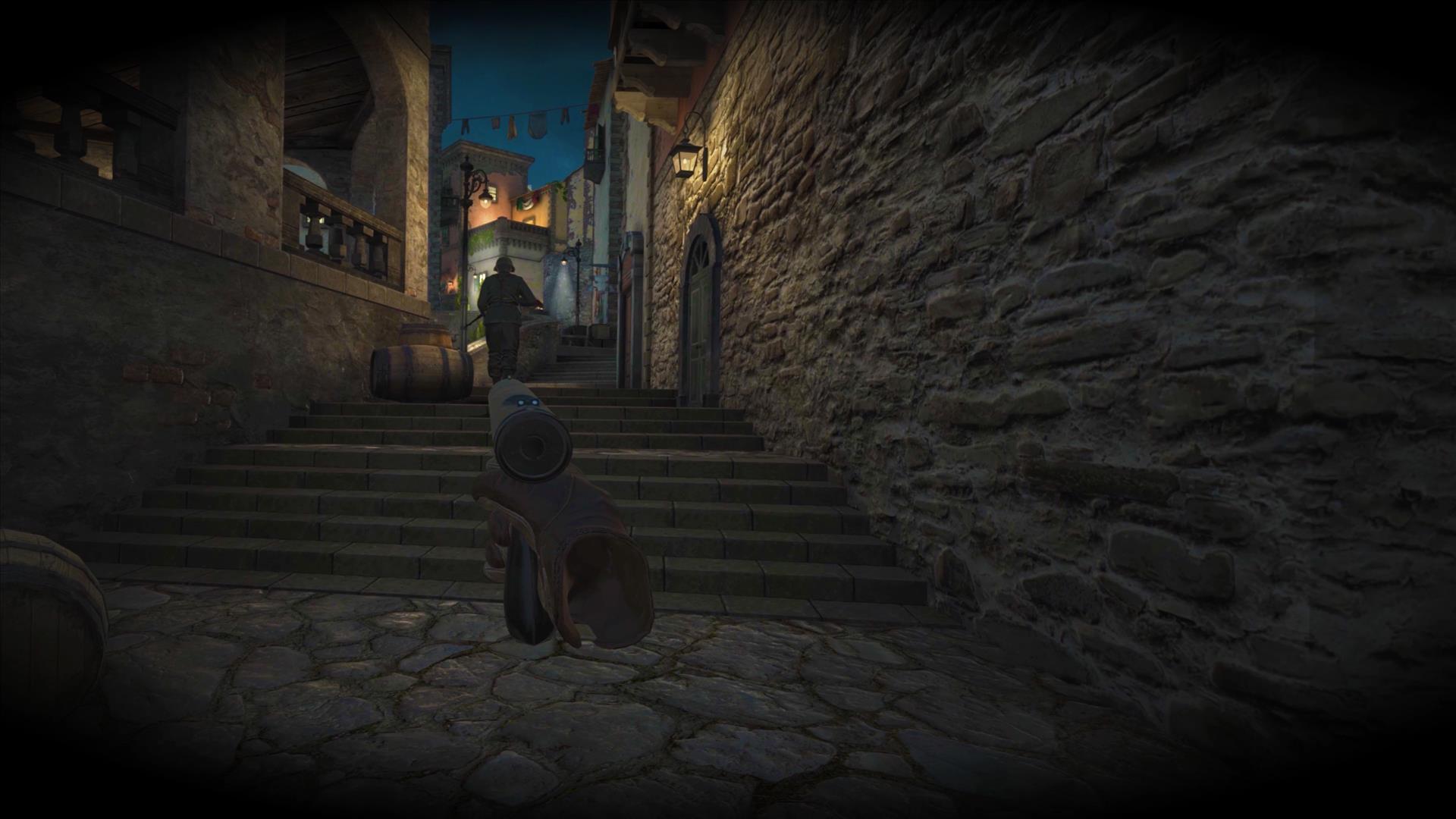 Progression is tied to your performance in earlier levels: a three-star performance rating grants the stars needed to progress, which is a particular pet peeve of mine. Sometimes I just want to breeze through a game and see everything it has to offer without needing to go back and replay earlier levels – which is precisely what I had to do to progress in Sniper Elite VR. I do not enjoy grinding older levels, particularly when some of the objective-based stars are timing-based, which pushed back on my natural inclination to move slowly and carefully through levels. I don’t want to run-and-gun through Sniper Elite levels, but that is exactly what the game ends up pushing the player to do.

Beyond all of my issues with the sometimes-difficult interface and the star-ranking base progression, I had a lot of fun with Sniper Elite VR. Frankly, a lot of my problems are likely just the result of me being bad at the game. Once I settled in and got the feel for how things work, Sniper Elite VR offered a good deal of suspense and entertainment. My best advice is to take your time and work with the different weapon types. Things go a lot smoother when you aren’t shooting yourself in the foot.

Sniper Elite VR offers a hefty experience for a VR game, with up to seven or eight hours of well-designed levels to creep through. The mechanics of the game take some time to get used to, and even after becoming accustomed to the controls, still feel a little awkward — though a nice selection of settings helps alleviate those issues. Some forced repetition pads the game towards the end, but overall Sniper Elite VR is a solid and fun experience.